I’ve just finished a book that I recommend very highly to anybody interested in freedom of speech and expression. In fact, of all the books I’ve read in the last few years on this topic, this is up there at the top with Mill’s On Liberty.  The more recent book, Kindly Inquisitors: The New Attacks on Free Thought, first appeared in 1993, and that’s the edition I read. I see, however, that Amazon is selling a 2013 “expanded edition” with a foreword by George Will (click on screenshot below), and I haven’t yet seen that one. (It’s only $14.07 in paperback, and is published by The University of Chicago Press.) The Amazon sample shows that Wills’s foreword is short, but that Rauch has also inserted an afterword.

Nevertheless, the earlier edition is still highly relevant. In fact, although it’s 27 years old, you wouldn’t know that from its contents, as it’s completely relevant to today’s Zeitgeist. The author, Jonathan Rauch, is an author currently working at the Brookings Institution and is a contributing editor at The Atlantic. He’s also openly gay, which he mentions several times at appropriate places in the book.

I should add that the book is remarkably well written for a semi-academic tome, and is a pleasure to read. 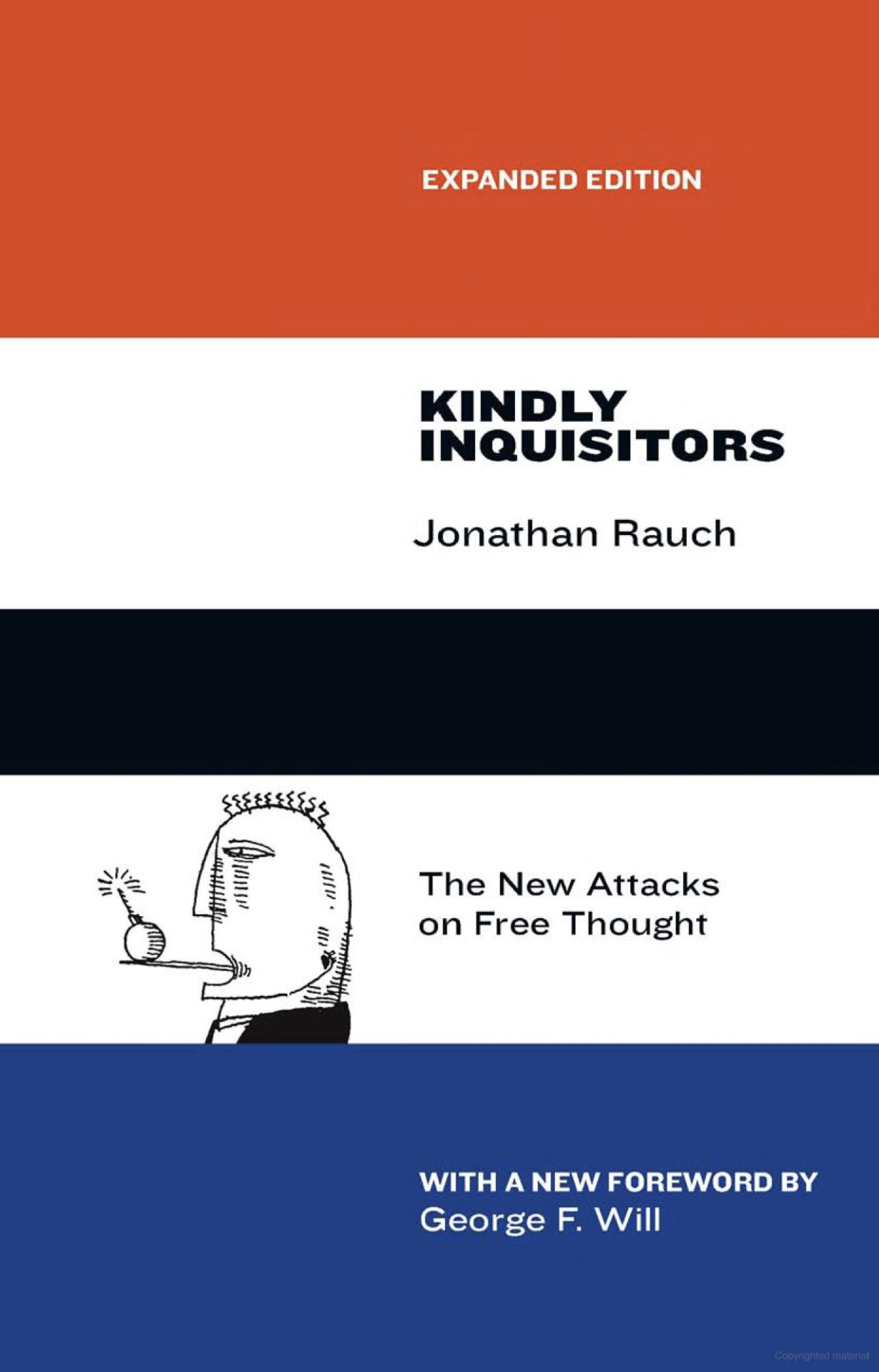 Rauch’s thesis is pretty much a defense of untrammeled free speech as limned by America’s First Amendment to the Constitution, and a defense of extending of that Amendment into venues that don’t necessarily have to adhere to it, like private schools and colleges. It’s also an admission that yes, free speech can be offensive and even harmful (to feelings only!), but that that’s okay, for the benefits of free speech palpably outweighs emotional damage. (Needless to say, Rauch doesn’t consider speech to be “violence”, a topic already bandied about in 1993).

A very brief summary. At the beginning, Rauch lays out four principles about who should decide what speech is permissible. I quote his alternatives (p. 6):

Many seem to feel that the proper policy is a combination of principles 2 through 4, but Rauch’s position is the “liberal principle,” which he spends the rest of the book justifying and defending.  That principle, which he also calls “liberal science” because it involves debate and cross-checking of claims, is summarized by two tenets (p 46; the explanation is mine:

A.) No one gets the final say. All truth claims are tentative, skepticism is prized (this is like science), and you can never reach a point where all further criticism is useless or prohibited. There can be no end of discussion, though some claims, like the chemical formula of liquid water, are as close to absolute truth as one can come. But for debates about things like affirmative action, abortion, and so on, one can never say that the discussion is settled, and, indeed, for claims like these, there are no absolute truths, only prescriptions that can be more or less useful to society. But those prescriptions can not only be discussed with reason, but informed by science itself.

B.) No one has personal authority. That is, there can be no arbiter of truth or of what speech can be tolerated. That is a form of censorship and authoritarian Diktat that is incompatible with societal progress.

As you can see, Rauch believes that completely free discussion—and that includes much of what is considered “hate speech”—is the best possible way to advance society, and to arrive at what truths can be grasped. This is pretty much Mill’s position, but Rauch’s book is a useful (but not complete) substitute.

As for “hurt” and “offense”, which are used to weaponize speech and gain power over others, as we saw in the previous post—Rauch simply dismisses them as valid complaints. Here’s a passage on that issue (p 19):

Somehow the idea has grown up that “liberal” means “nice,” that the liberal intellectual system fosters sensitivity, toleration, self-esteem, the rejection of prejudice and bias. That impression is misguided. The truth is that liberal science demands discipline as well as license, and to those who reject or flout its rules, it can be cruel. It excludes and restricts as well as tolerates. It thrives on prejudice no less than on cool detachment. It does not give a damn about your feelings and happily tramples them in the name of finding truth. It allows and-here we should be honest-sometimes encourages offense. Self-esteem, sensitivity, respect for others’ beliefs, renunciation of prejudice are all good as far as they go. But as primary social goals they are incompatible with the peaceful and productive advancement of human knowledge. To advance knowledge, we must all sometimes suffer. Worse than that, we must inflict suffering on others.

The suffering, of course, is mental, not physical, but Rauch’s response to people like those who accused the American Mathematical Society of “harm” and “offense” would be: “Suck it up; you’ll live.”

This sentiment has been echoed in more recent years by Stephen Fry, Christopher Hitchens, and Salman Rushdie.

“If someone tells me that I’ve hurt their feelings, I say, ‘I’m still waiting to hear what your point is.’

In this country, I’ve been told, ‘That’s offensive’ as if those two words constitute an argument or a comment. Not to me they don’t.

And I’m not running for anything, so I don’t have to pretend to like people when I don’t.”

“It’s now very common to hear people say, ‘I’m rather offended by that.’ As if that gives them certain rights. It’s actually nothing more. . . than a whine. ‘I find that offensive.’ It has no meaning; it has no purpose; it has no reason to be respected as a phrase. ‘I am offended by that.’ Well, so fucking what.”

Well, it does have a purpose: to gain power over other people as well as attention.

All of us should have some version of these sentiments at hand! At any rate, I importune you to read Rauch’s book.

32 thoughts on “A great book on freedom of speech”