We have diverse photos from reader Tom MacPherson today. Tom’s captions and IDs are indented, and you can enlarge his photos by clicking on them.

Here are some pictures I took during a pre-pandemic trip to south-west Florida in February, 2020.

Anhinga (Anhinga anhinga). It made me think of a common loon in formal evening attire. 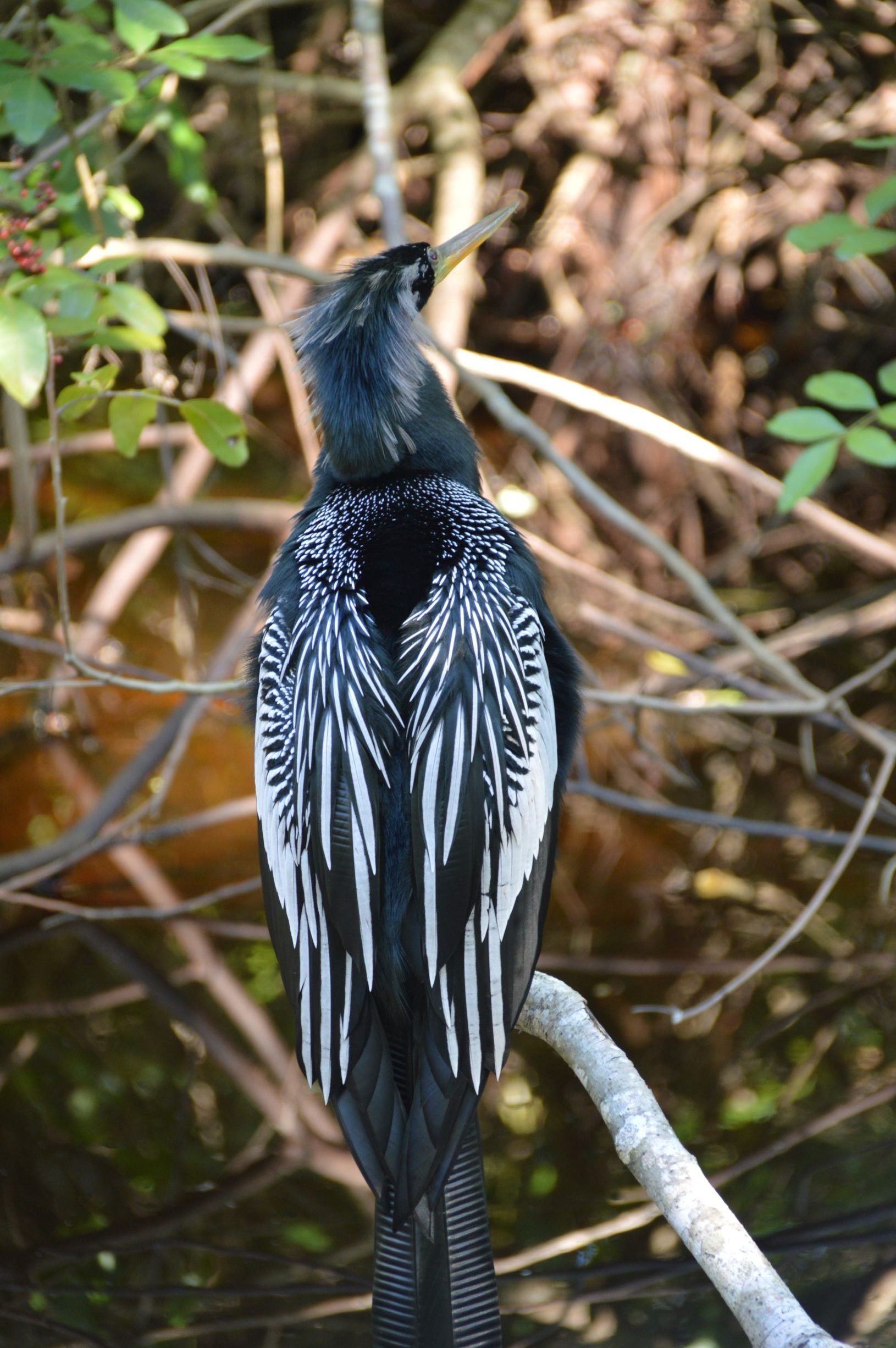 Burrowing Owl (Athene cunicularia).  These owls are protected in Florida, which is why the burrows were roped off. I don’t know who installs the ropes and short perch, but they all have them. If they move onto your vacant lot, you can’t build until they willingly move out. However, apparently it is legal to dig a fancy burrow down the block on someone else’s vacant lot to entice them to move out. They seem habituated to humans wandering by. They don’t hide or leave, they just watch you carefully. They also gave me a fright a couple of times while I was out stargazing after dark, soundlessly gliding by three or four feet off the ground. 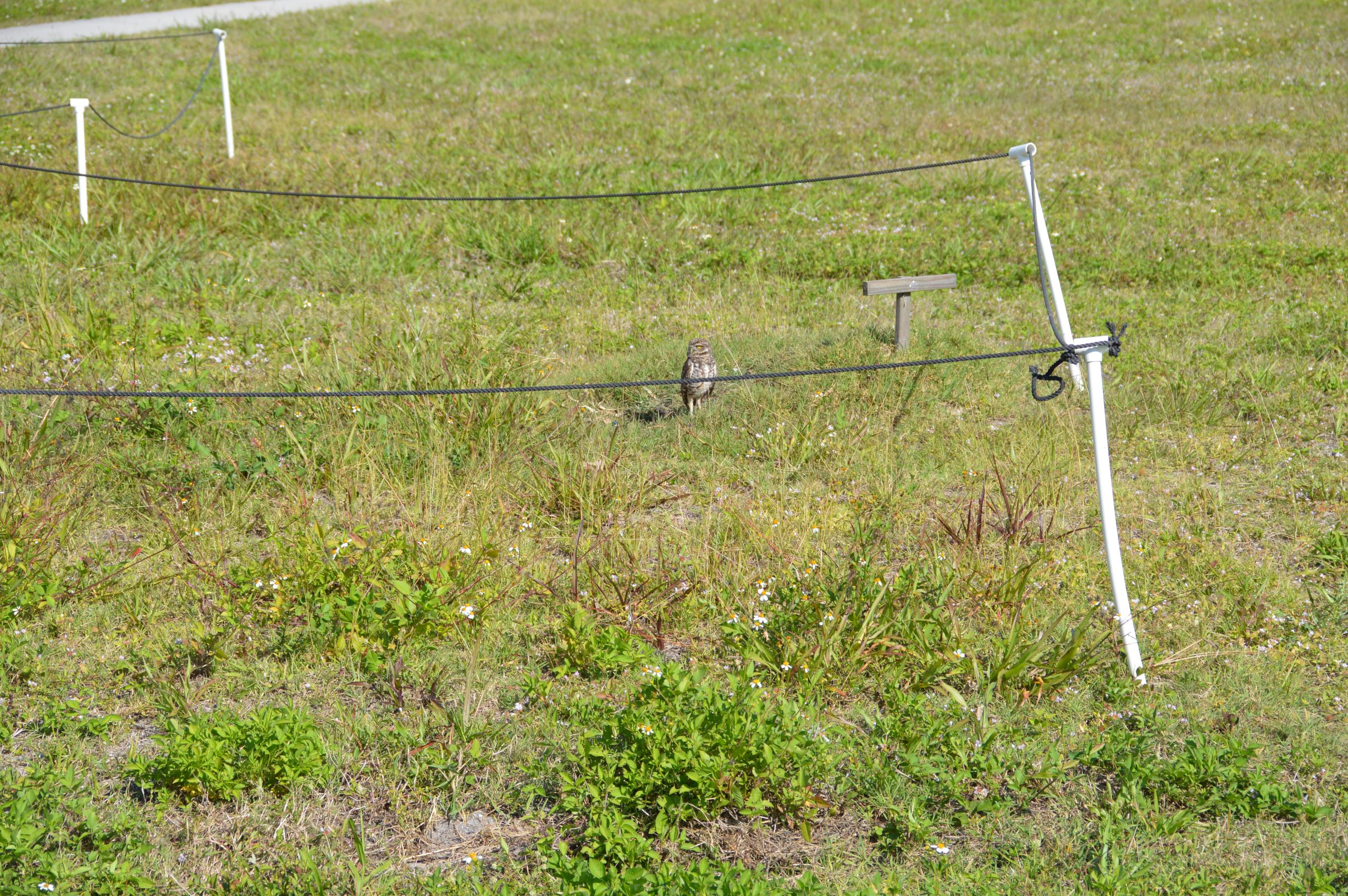 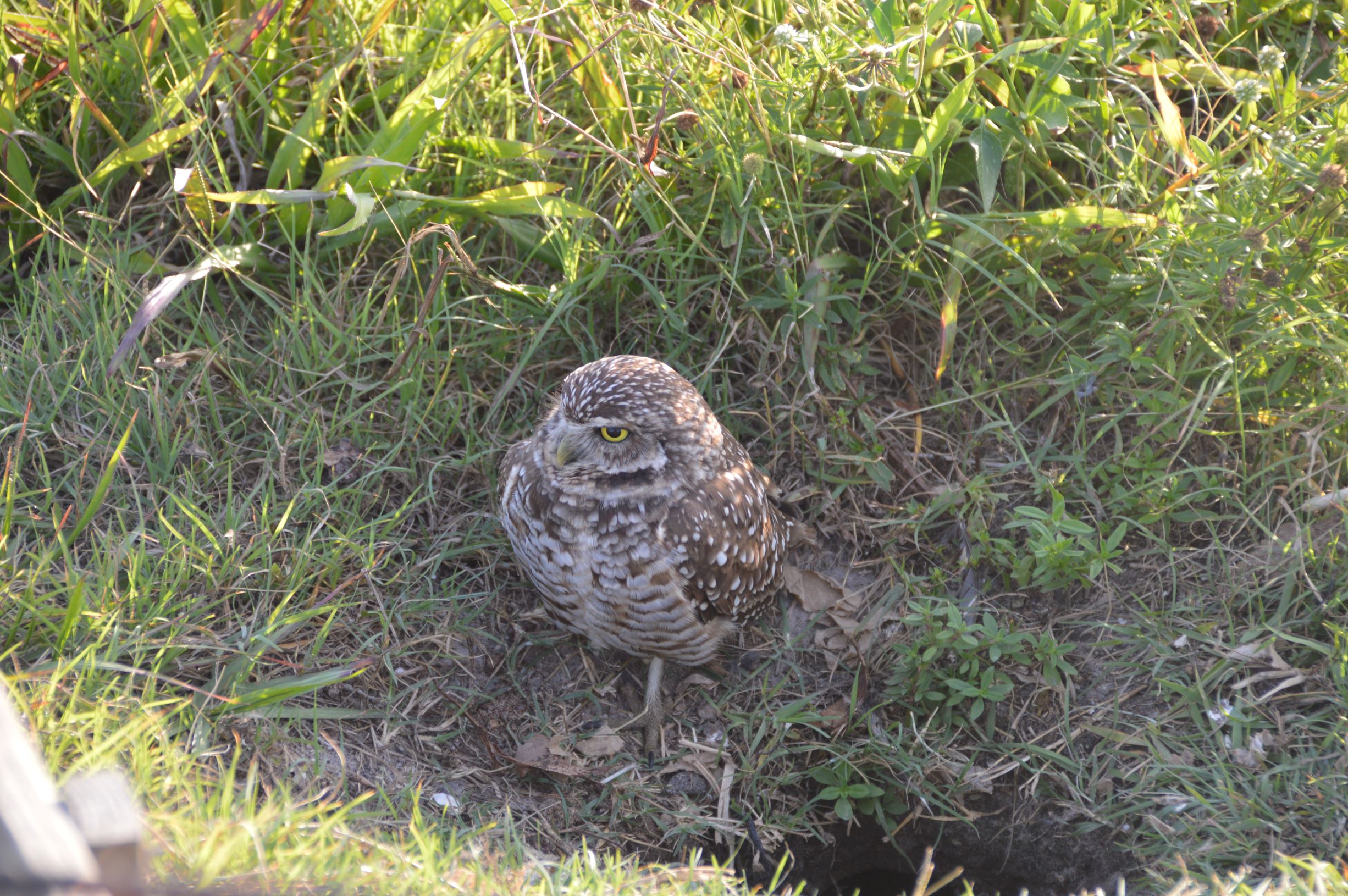 Black Skimmer (Rynchops niger).  Notice the elongated lower half of the bill, used to feed while skimming low over the water. 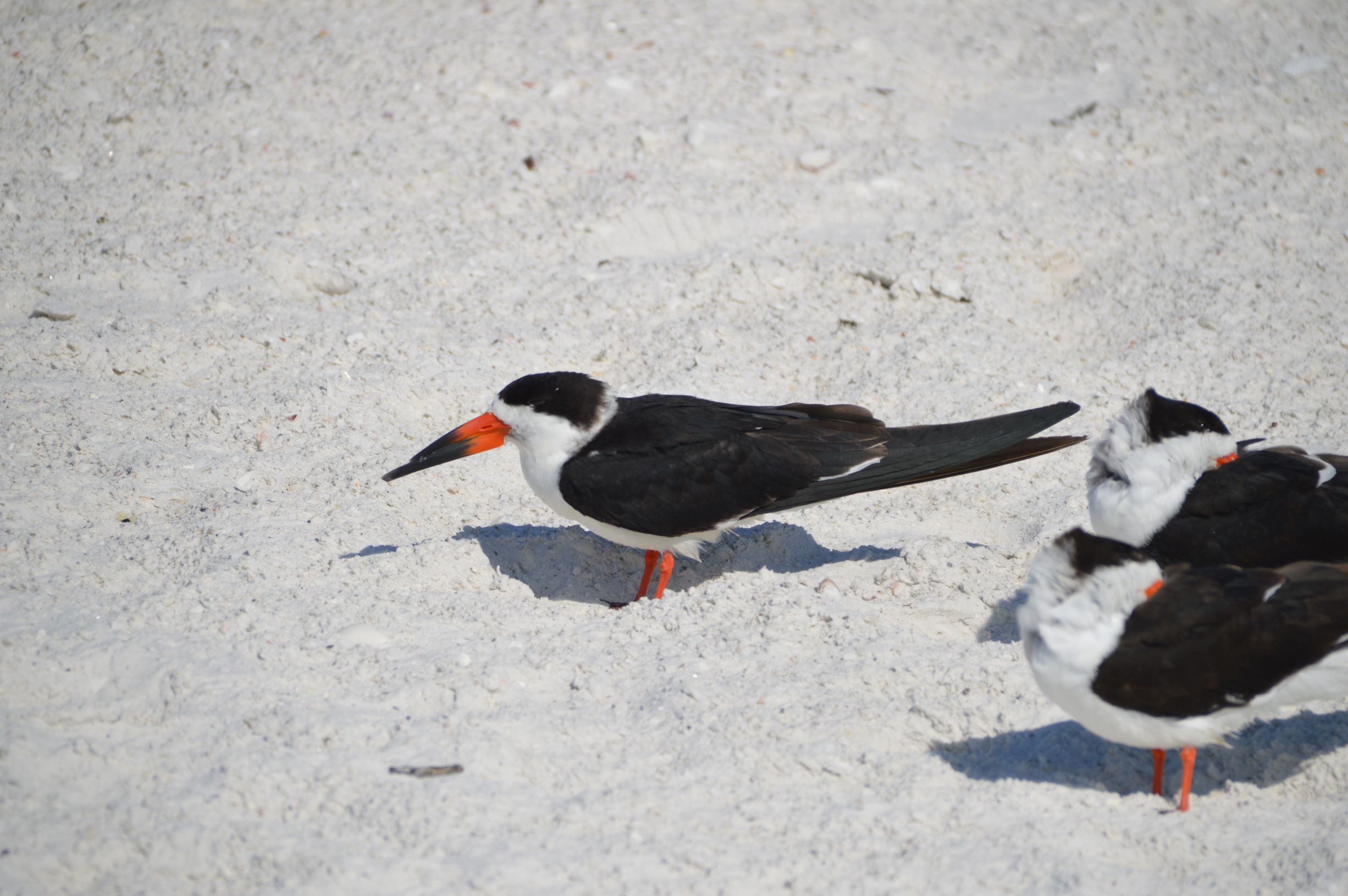 Royal Tern (Thalasseus maximus). The Elegant Terns would gather in a group on the beach right beside a group of Black Skimmers, but the two groups never seemed to mingle. 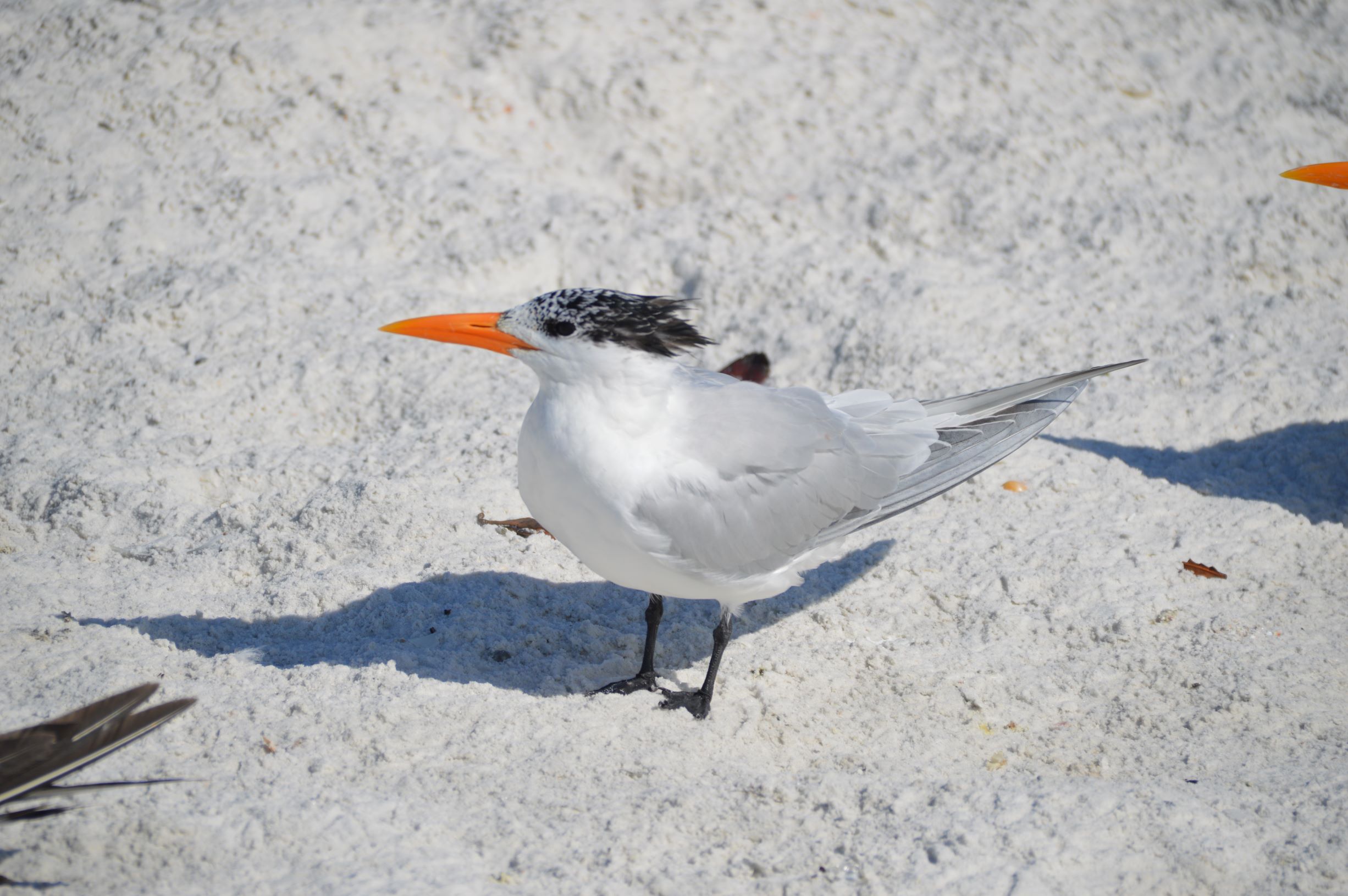 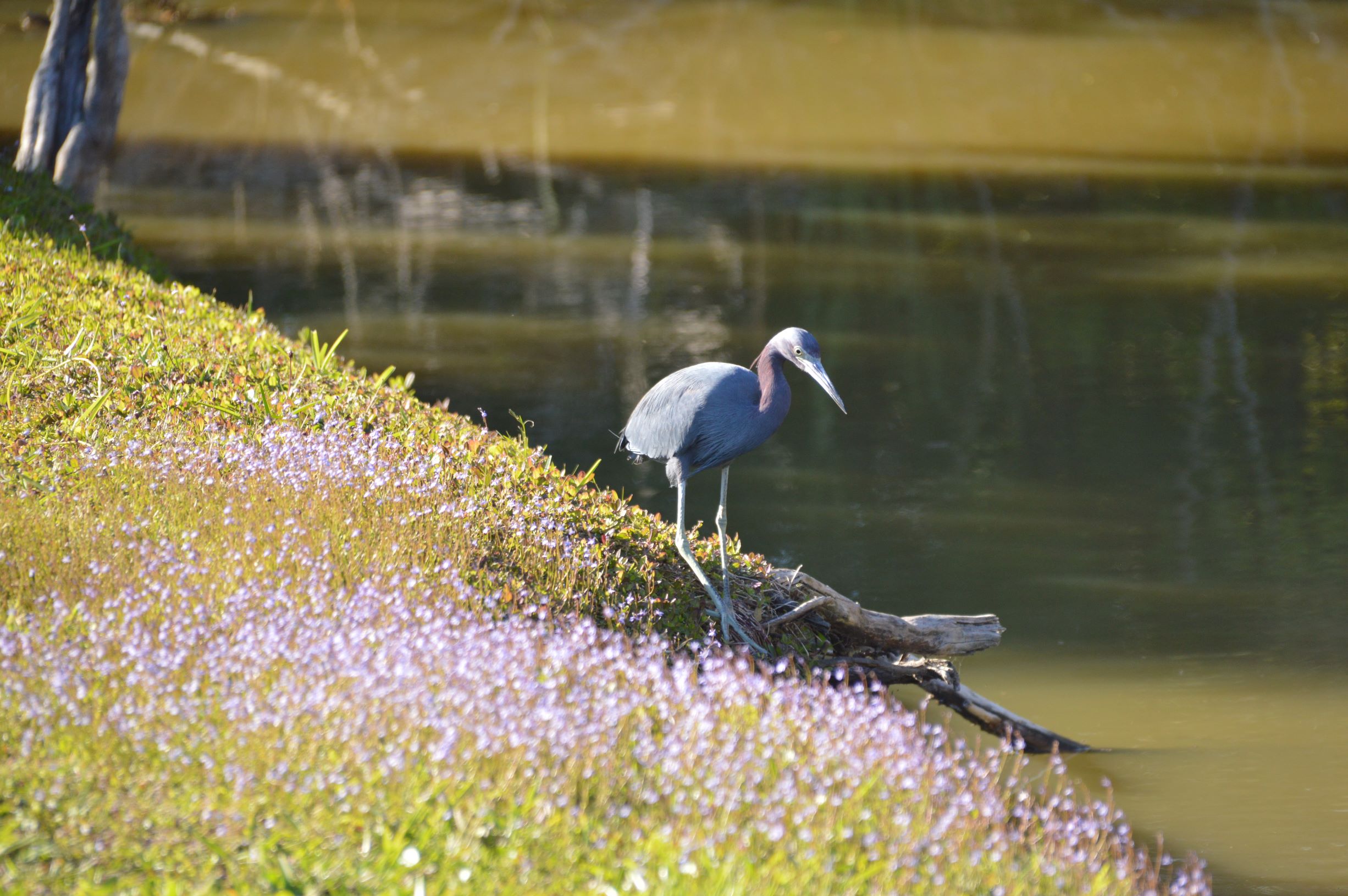 Cardinal airplant (Tillandsia fasciculate). This is an epiphyte, described in Wikipedia as “an organism that grows on the surface of a plant and derives its moisture and nutrients from the air, rain …. or from debris accumulating around it.” 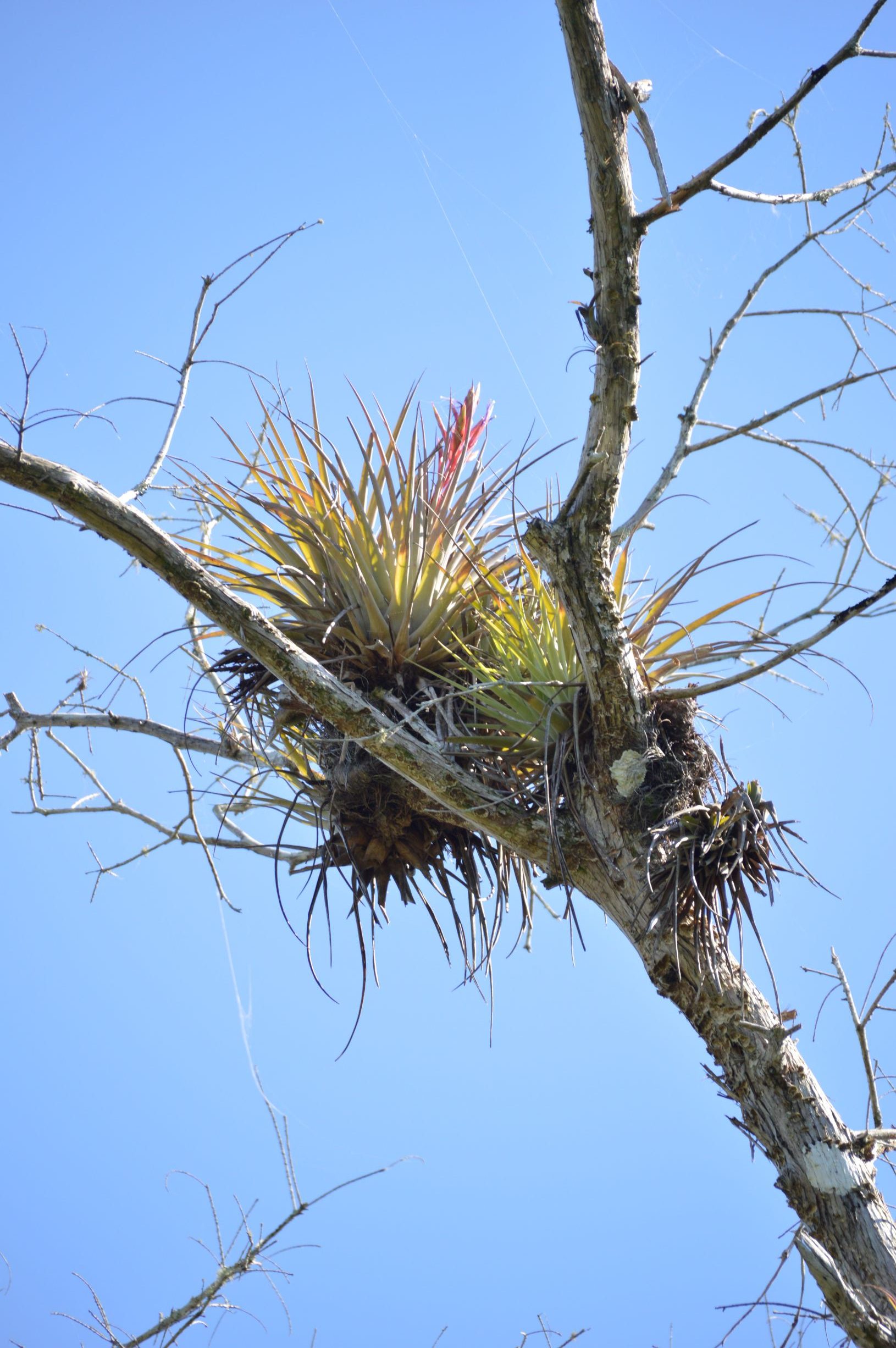 Florida Strangler Fig (Ficus aurea). The Strangler Fig starts as an epiphyte, but once it gets a root down to the ground, it takes over, wrapping around the host tree and killing it before developing into a large tree itself. 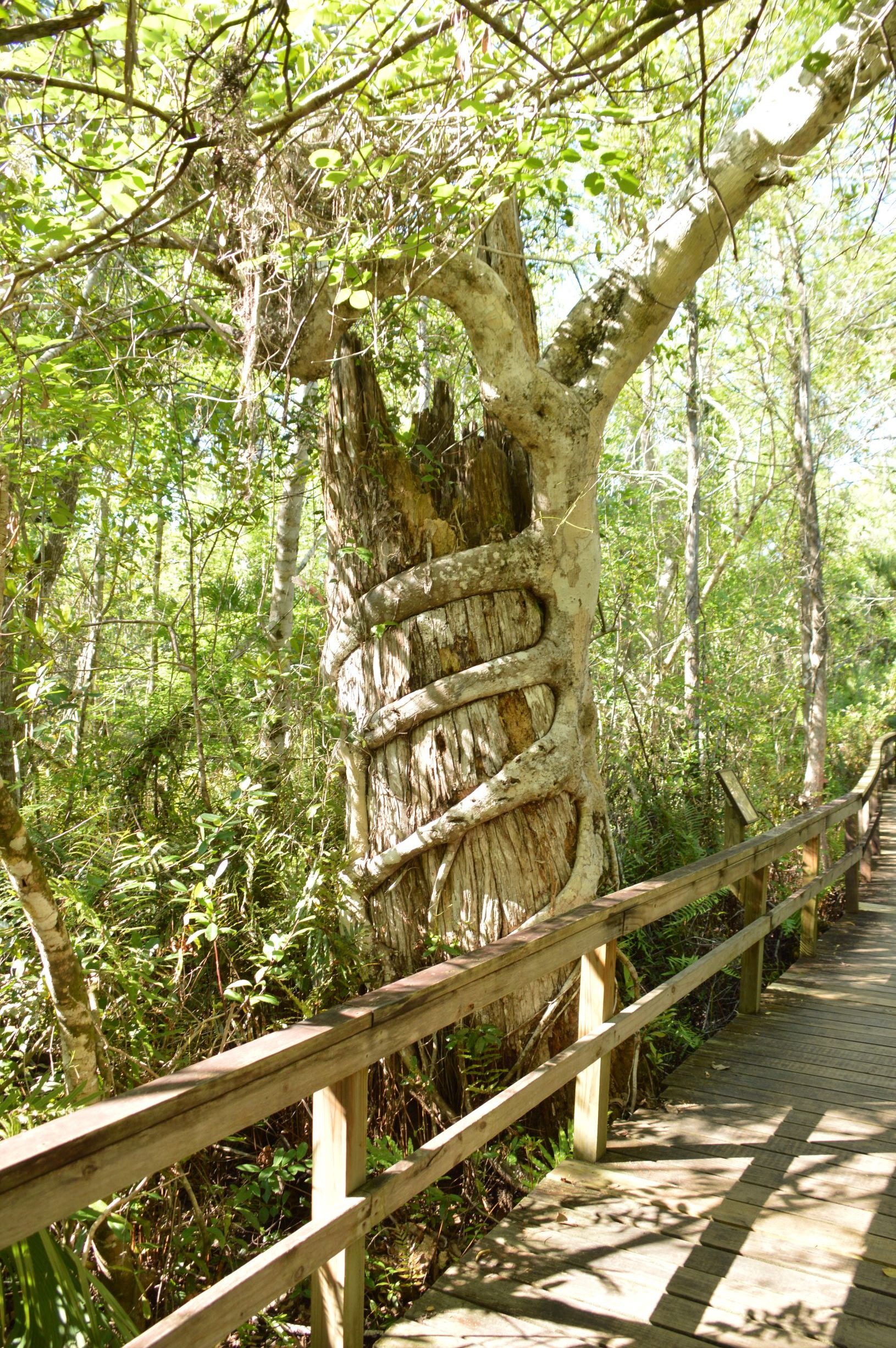 Great Blue Heron (Ardea Herodias). This particular specimen of this famously patient species ran out of patience and started edging towards the center of the pond where a few small fish were splashing around. He better be careful. Bonus activity – spot the alligator! 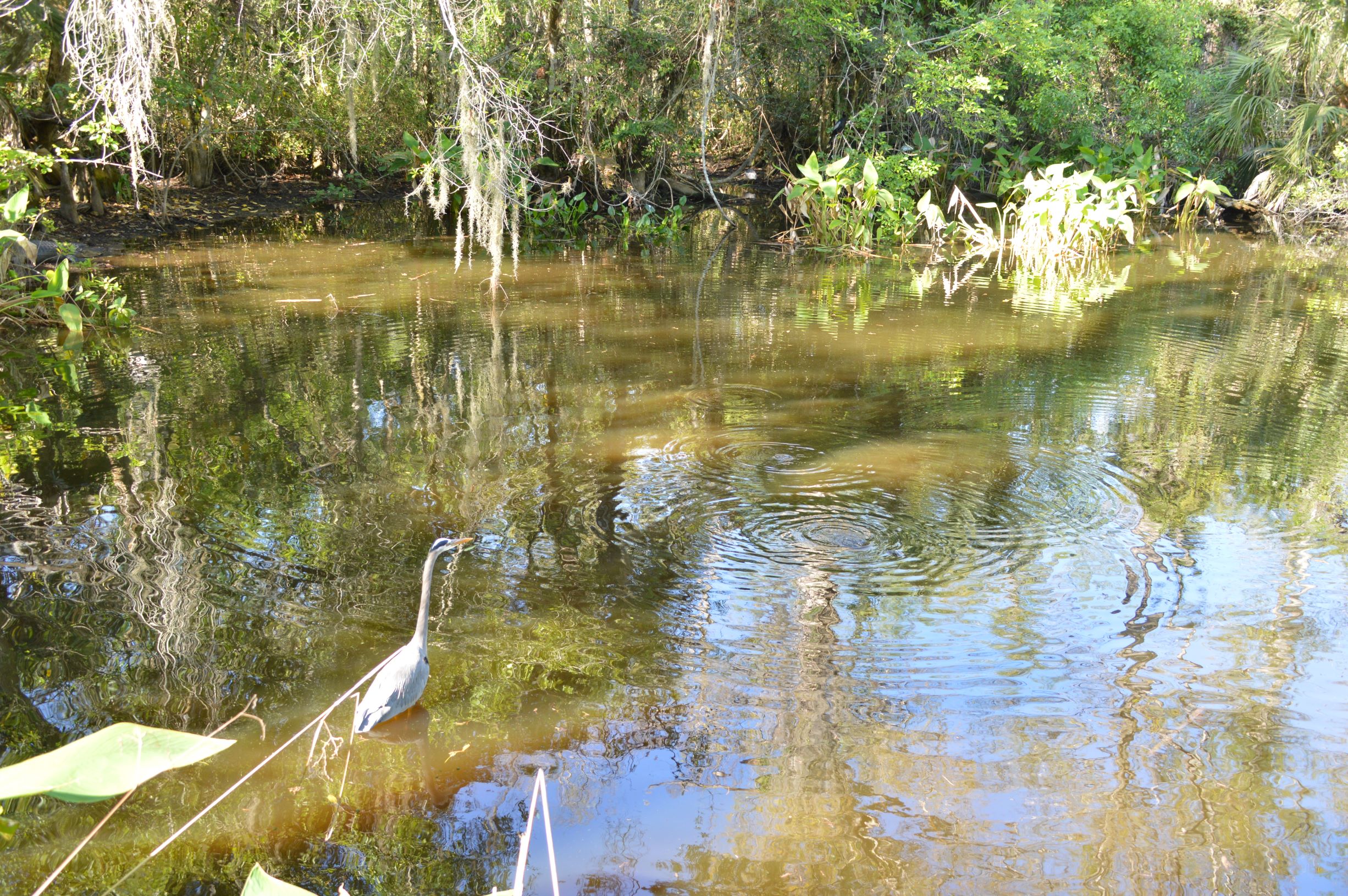 Brown anole (Anolis sagrei). These little guys were all over the place, and tended to pose perfectly until I got a millimeter too close, and then they would dart off at warp speed and disappear. This is the final of about 20 pictures I took as I slowly crept closer. Digital photography is very freeing! 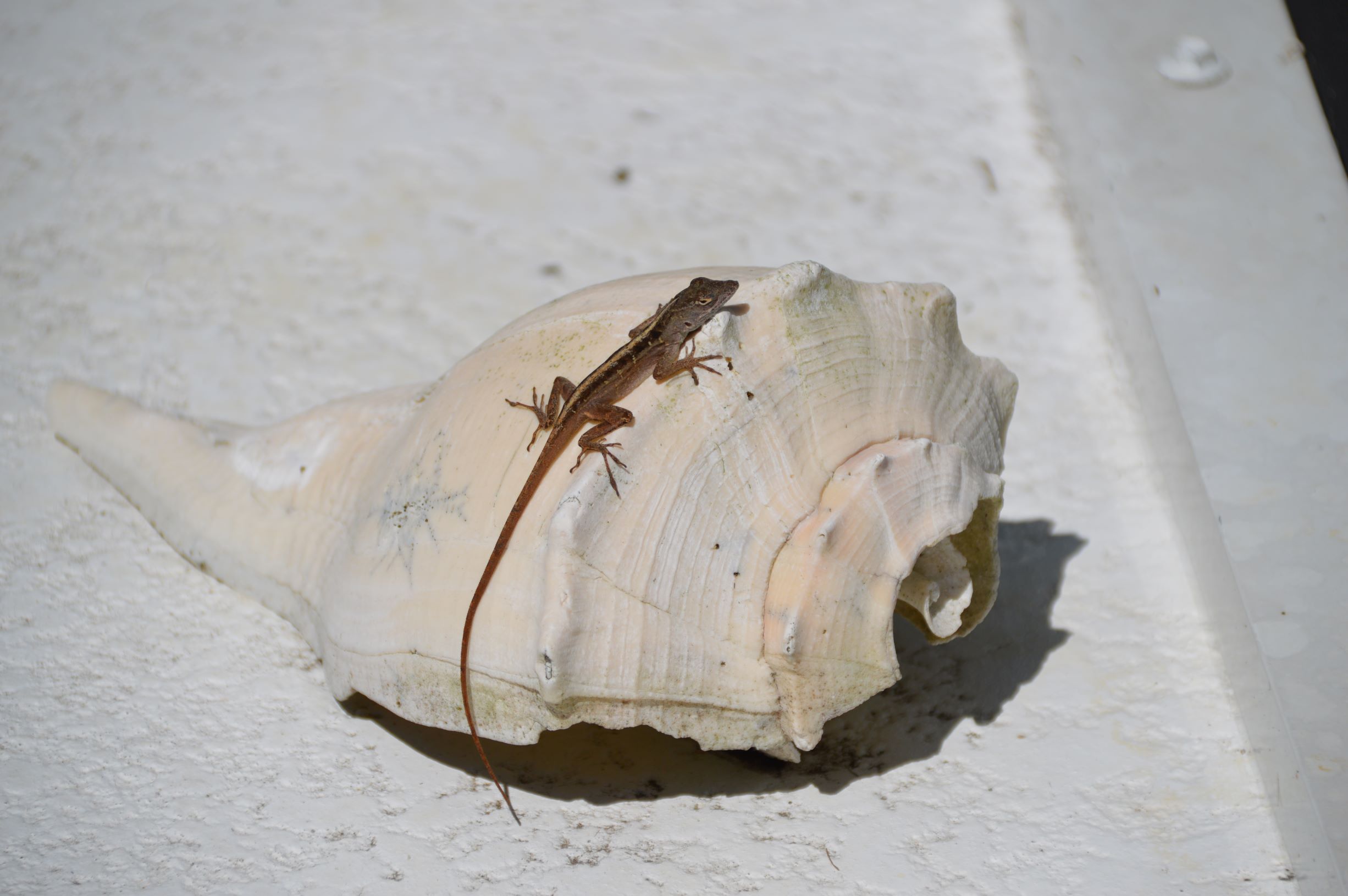