Thanks to several readers for heeding my request for photos. I always need pictures, though, so do think of sending me some if you’re in possession of good ones.

Today we have regular Mark Sturtevant with his customary lovely and informative pictures of insects. Mark’s comments and IDs are indented; click on photos to enlarge them.

First up is one of our larger insects, the summer fishfly. For scale, it is approximately the size of your index finger. Fishflies are members of a somewhat obscure order, the Corydalidae, and in various respects they are fairly primitive insects even though they have complete metamorphosis with a larval and pupal stage.

An unusual thing about the pupa is that they can crawl around. This particular species is Chauliodes pectinicornis, and I found it at some lights that were left on overnight at a local park. If you are wondering about the white spot on its head, that is one of its large and reflective ‘simple eyes’. 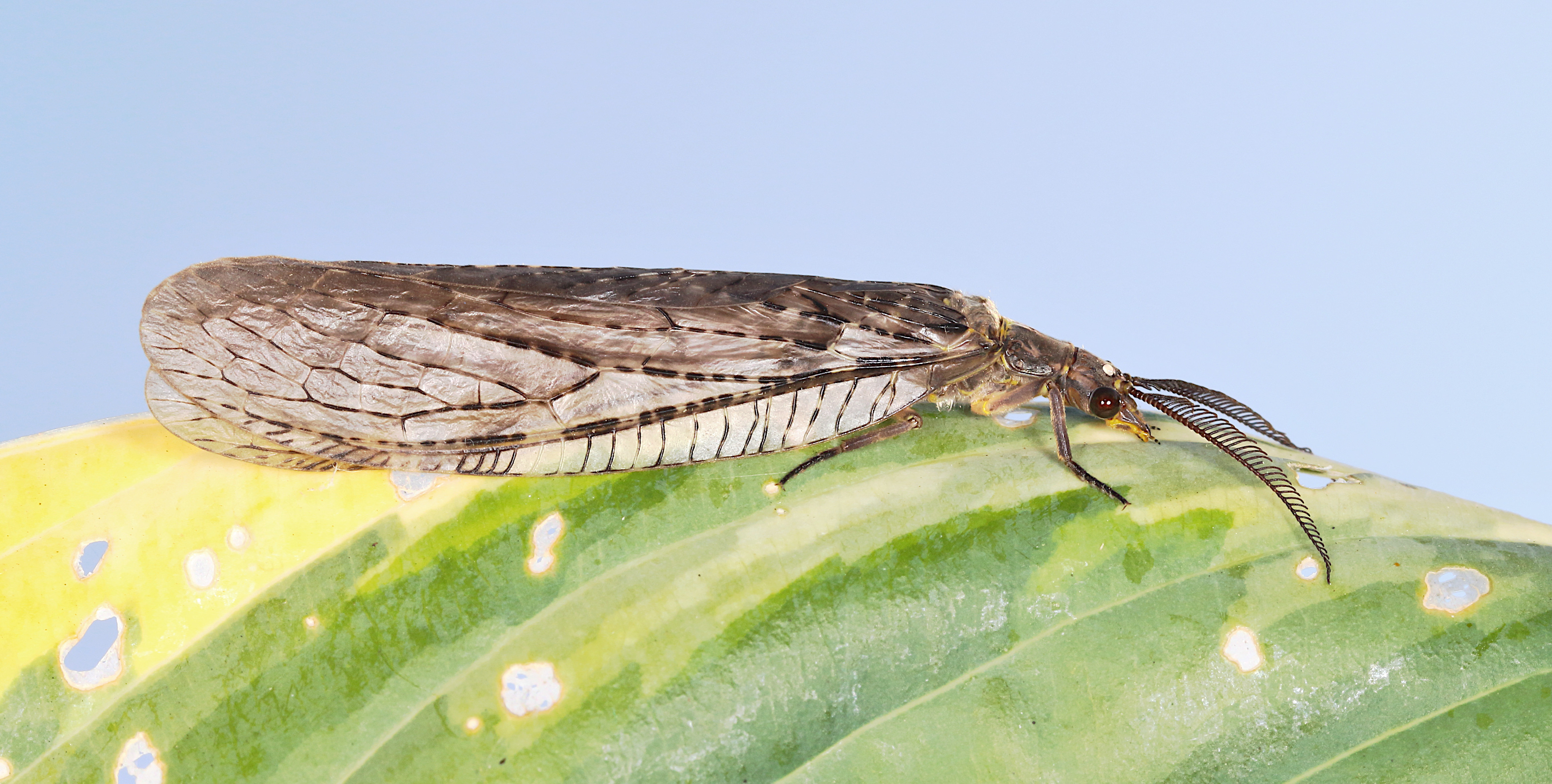 Next up are two larvae that strongly resemble caterpillars, but are actually the vegetarian larvae of wasps known as sawflies. Sawfly larvae and caterpillars (the larvae of butterflies and moths) are examples of convergent evolution. The first is Macremphytus testaceus, on dogwood, and the second is Allantus cinctus. This species is a pest on cultivated roses, although this one was in a forest, possibly on wild rose. 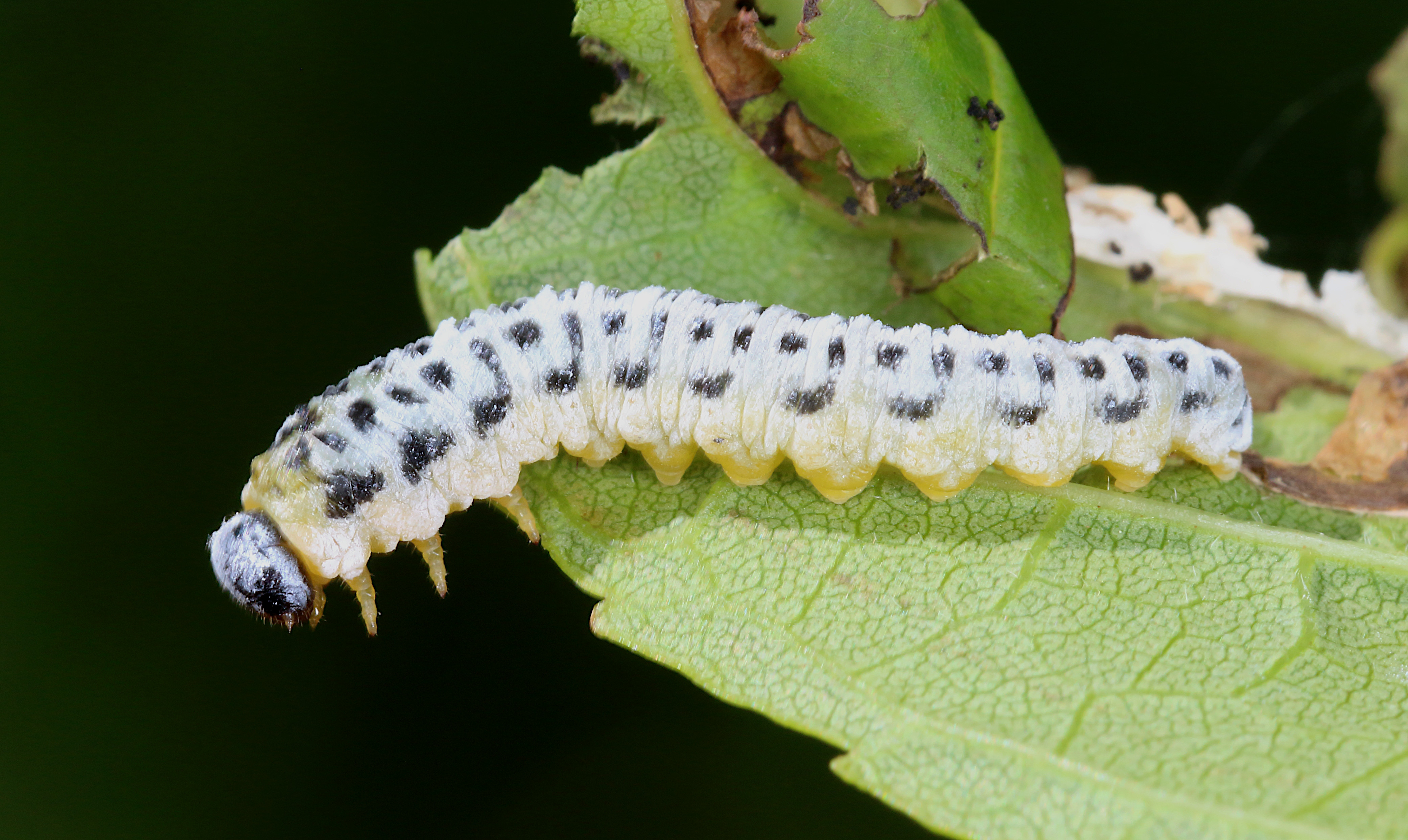 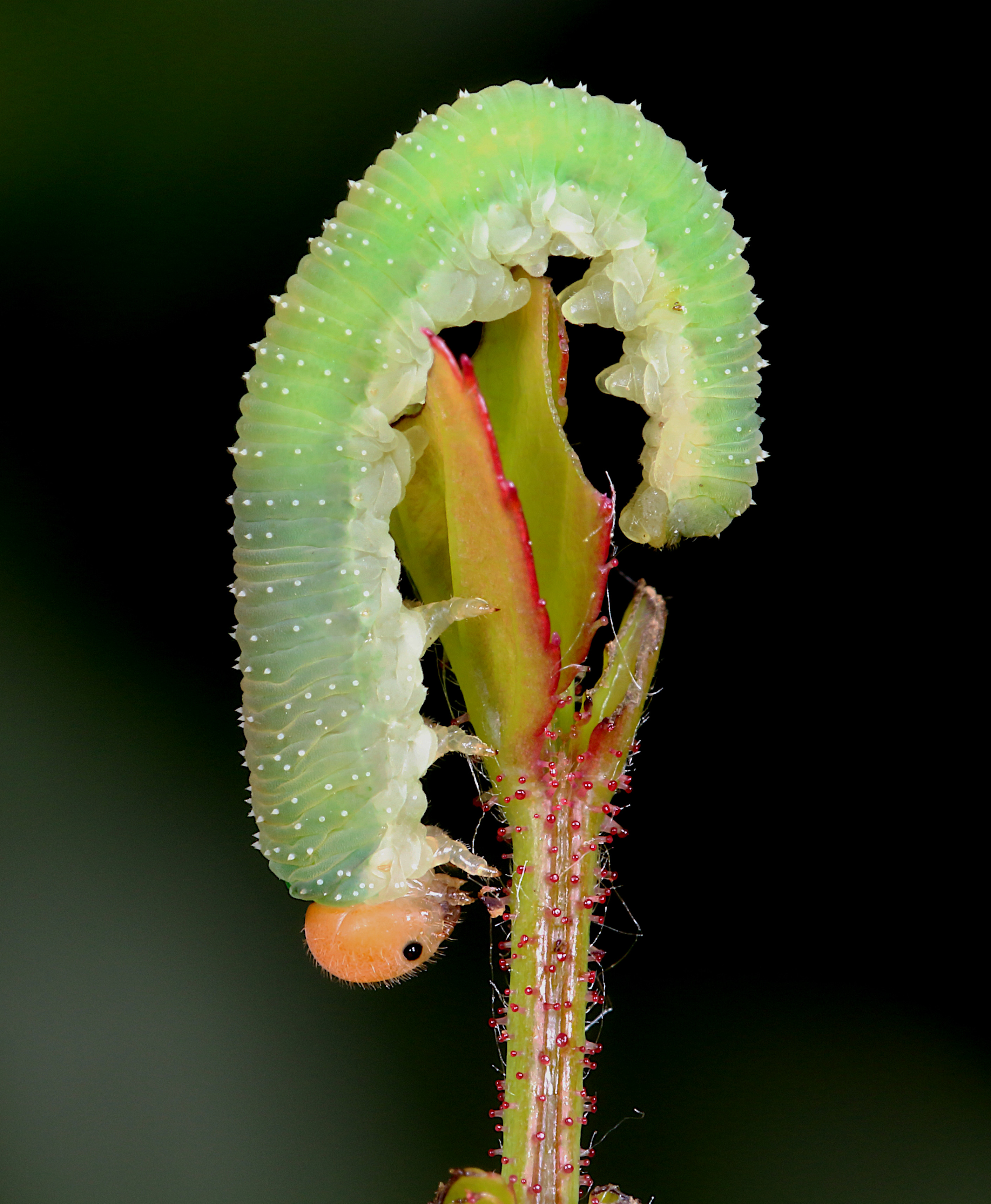 At one of the parks I visit, there is a community garden area where locals can grow various crops. It is always profitable to prowl up and down the narrow lanes between the gardens. One day I came across this large and strange bee that was foraging along a row of sweet peas. The extra furry underside of its abdomen identifies it to the family Megachilidae, and familiar examples of these bees are leaf-cutter bees. But this was a big ‘un, easily twice the size of those bees. So what is it? This is the giant resin bee (Megachile sculpturalis sculpturalis), an introduced species from Asia. The bee was presumably provisioning a nest in a wooden retreat somewhere, and in there larvae will be raised in separate cells made from mud and tree resin. 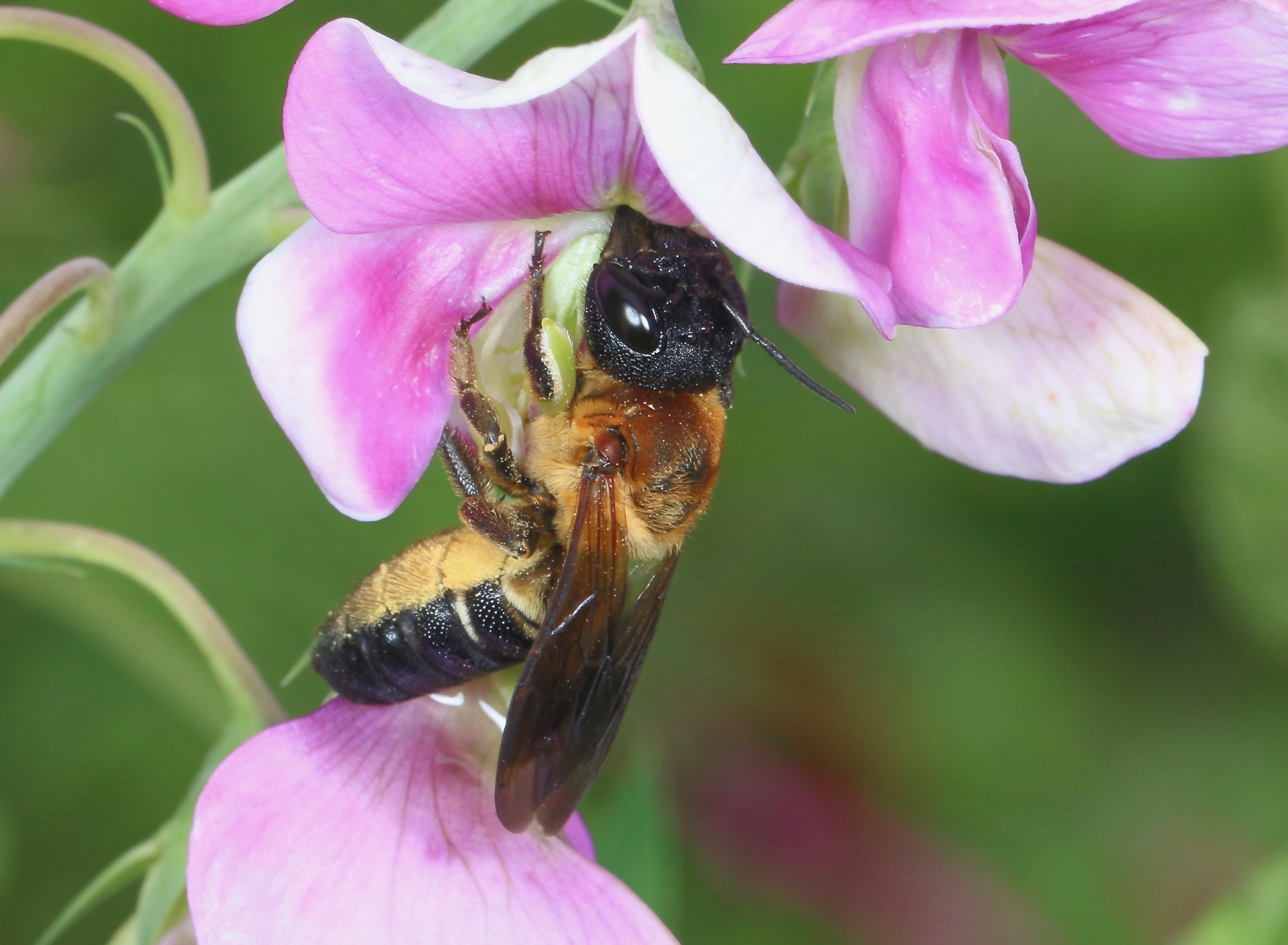 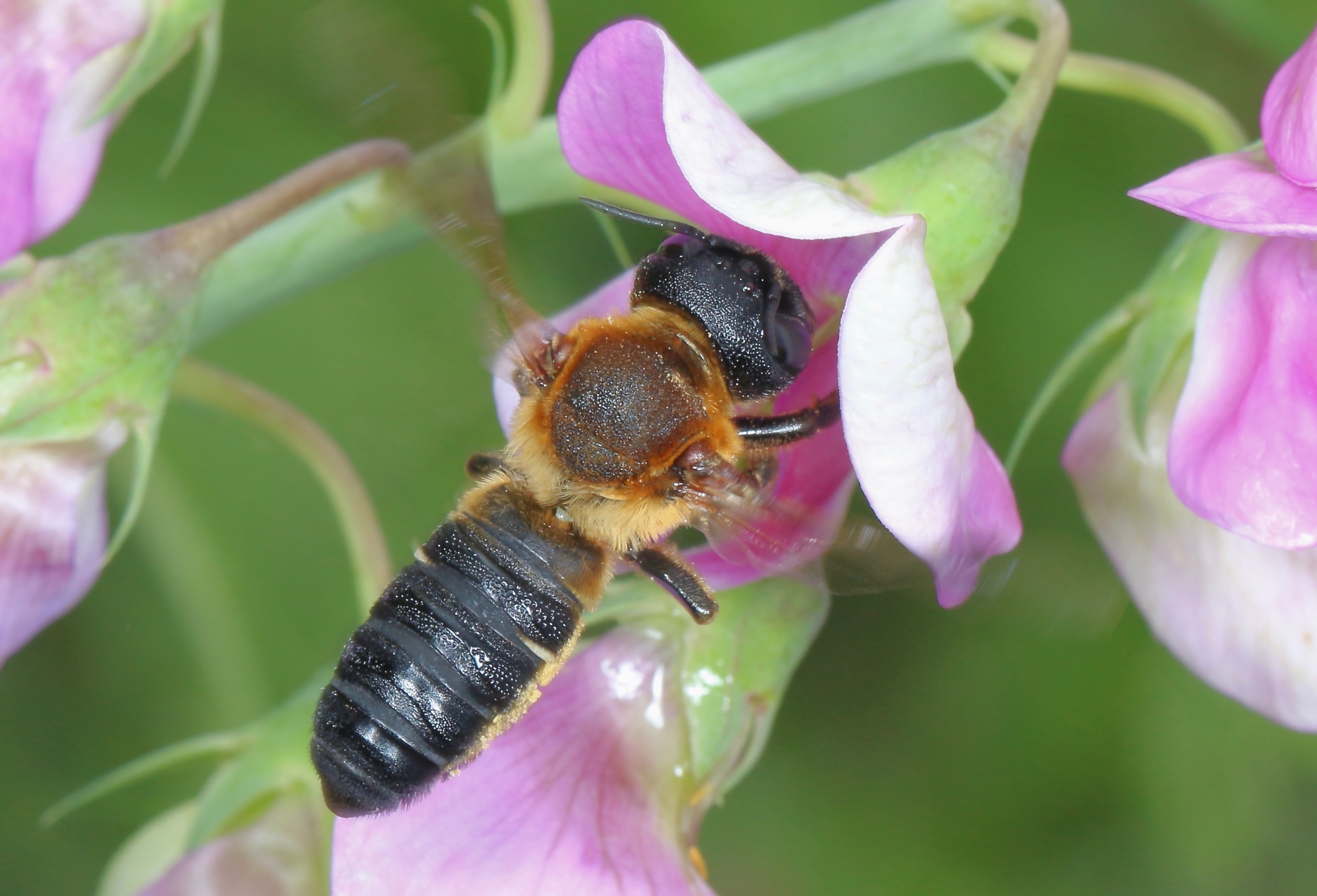 At the same park I got a very big surprise. I noted what looked like a simple leaf gall, only it had this suspicious symmetry. So I touched it, and it immediately unfurled into this weird little spider! This is a species of bolas spider, specifically Mastophora yeargani. These are orb-weaving spiders that do not build typical webs, but instead sit on the end of tree branches at night to dangle a single silk strand with a glob of sticky glue at one end. When a flying insect comes close, it flings this ‘bolas’ at the insect, snagging it in mid-air and then reeling it in for a meal. I did not know they were in Michigan (none are recorded in BugGuide, so I will be sending this to them). 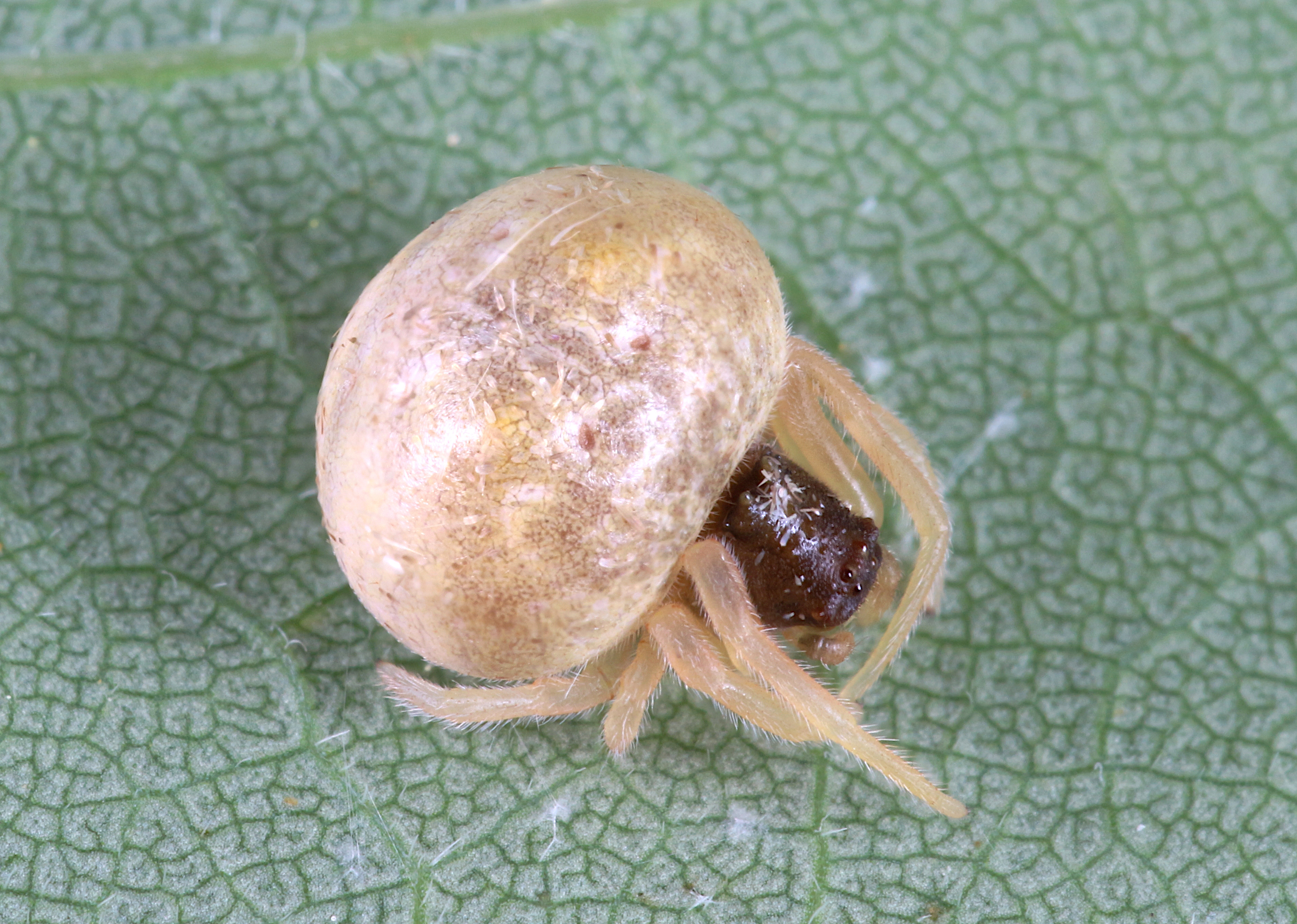 The best parts of this story are colorfully told in this True Facts video by Ze Frank. Do watch it, and someone can then report back and tell us what those loose flakes are on the spider.

Next up is a well concealed flower crab spider that got quite a catch. This one looks to be in the genus Misumenoides, based mainly on the arrangement and relative sizes of the eyes. 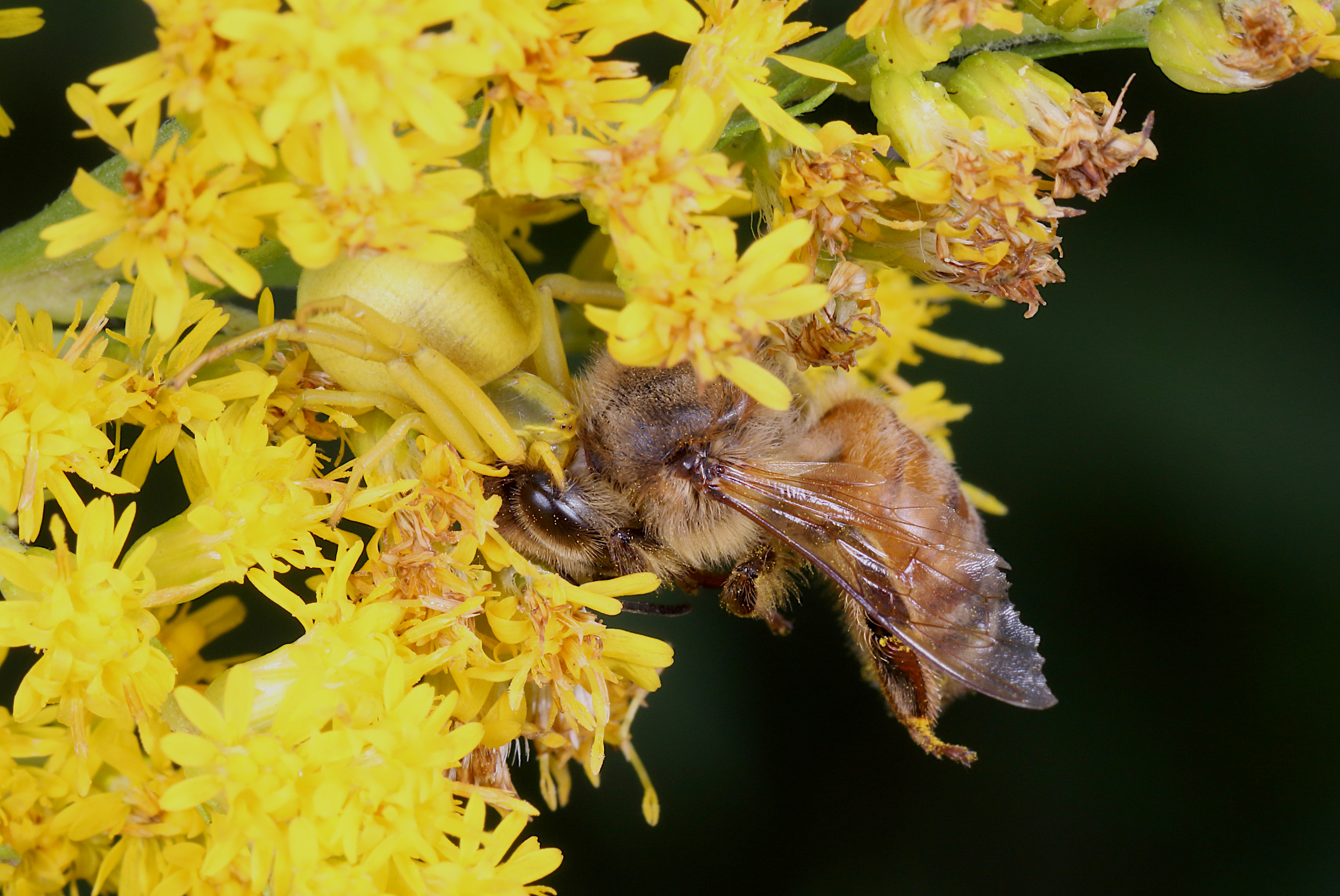 Moving back to Hymenoptera. A place I call the Magic Field hosts many wildflowers, including spotted beebalm (aka horsemint), and these are super attractive to large solitary hunting wasps. The wasps include a large species of spider wasp (Anoplius americanus), so-named because it hunts spiders, paralyzing them to feed to their larvae. This spider wasp is very difficult to photograph (at least for me), since they forage through the flowers at break-neck speed—even faster than the swift golden digger wasps and great black wasps that also frequent these flowers. So here I cheated a little by catching a spider wasp in a net, and I then attempted to immobilize it for a time with CO2 from a few Alka Seltzer tablets. This old trick of using CO2 as an insect anesthetic does not always work, and that was the case here since the wasp was slowed only a little. She flew off in a few seconds, and I was lucky to get this single acceptable picture. 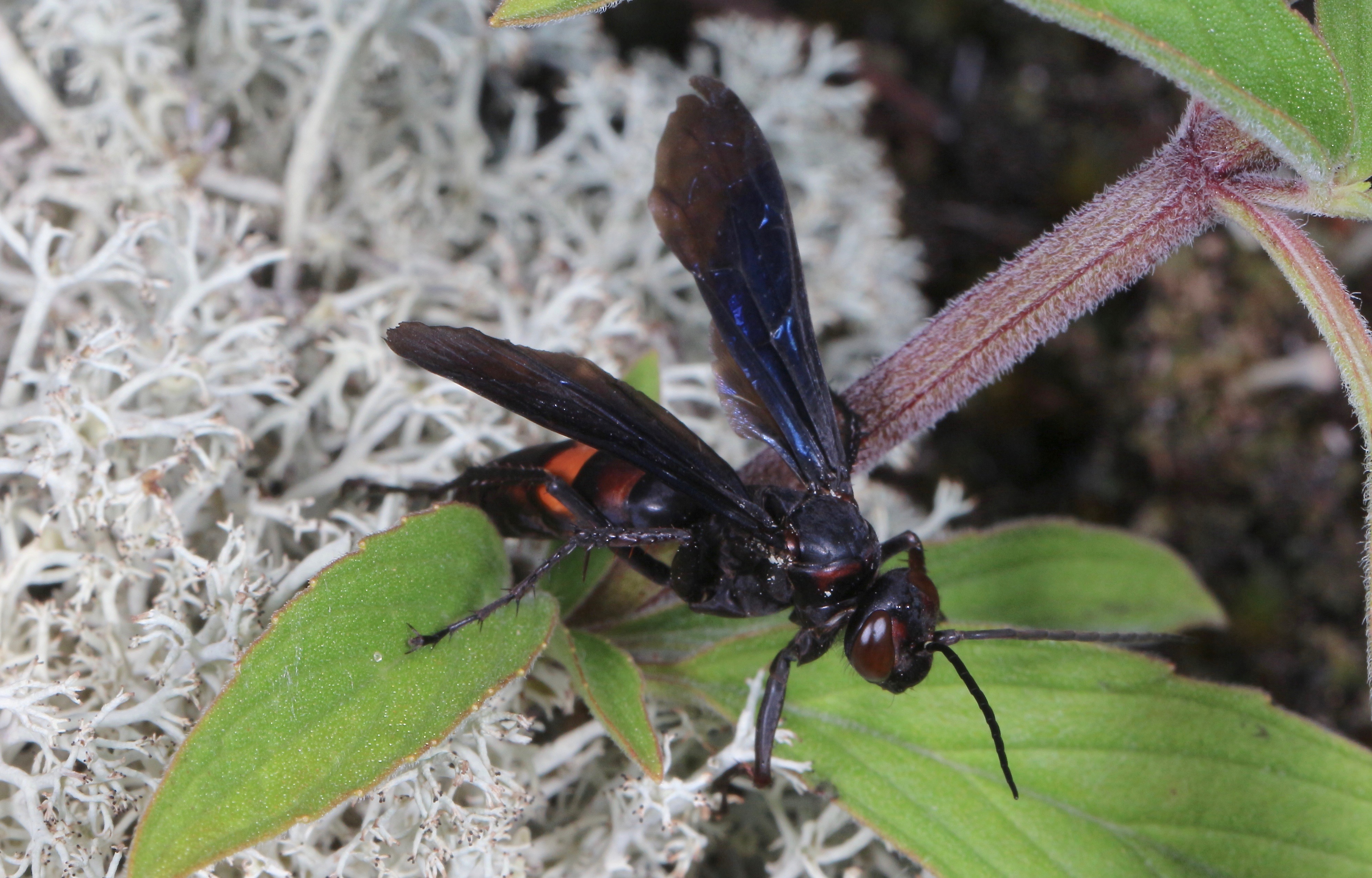 The Magic Field also hosts the main prey for the above spider wasps, a burrowing wolf spider (Geolycosa missouriensis). These large spiders are seldom seen during the day, except they occasionally sit at their burrow entrance in the early morning. Of course they will retreat underground when approached, but will pop back up after several minutes once they think the coast is clear. Although I don’t normally bother with a tripod, it was helpful here to remotely get a low-angle picture of a wolf spider at their burrow entrance. The next picture shows the result. These wolf spiders are not fans of spider wasps! I expect many are taken, although I have never seen it happen. 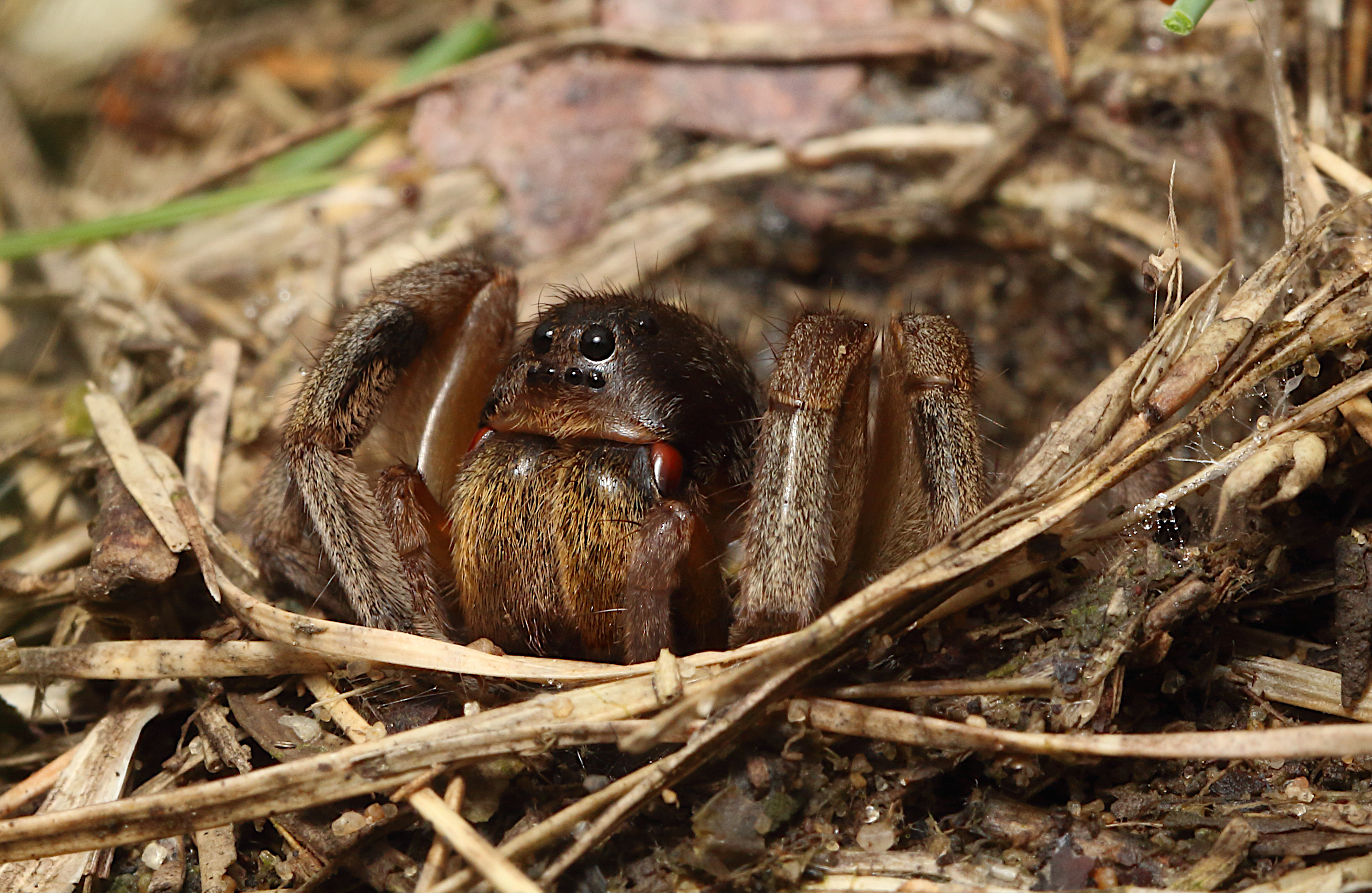 Finally, sometimes readers are curious about equipment that is used to photograph arthropods. In truth, almost any dslr or mirrorless camera and macro capable lens will take excellent pictures. But the last picture shows how the above wolf spider was photographed. Come to think of it, all the pictures up there were taken with this rather old camera, the Canon t5i, and the lens is the Canon 100mm f/2.8L macro lens. That’s a fancy lens, but any true macro lens will be essentially as good. You can see in the background the external flash that I normally use for this camera, which is the Kuangrendual head flash with a couple of instant-noodle soup bowls mocked up to be diffusers. That flash was too cumbersome for this particular situation, so I had to improvise. 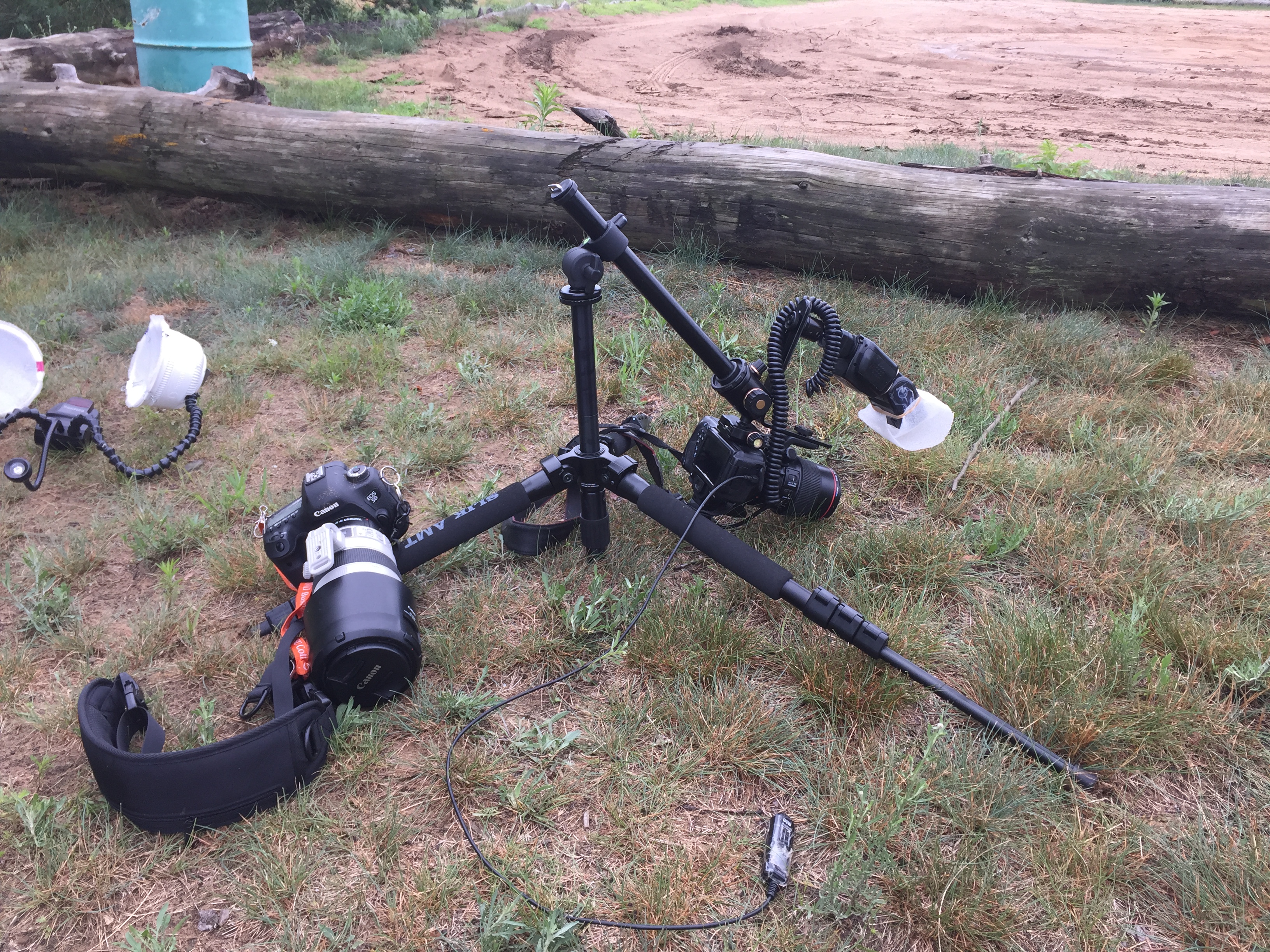