Doug Hayes gives us part 11 of his “Breakfast Crew” series. His notes and IDs are indented; click on screenshot to make the pictures bigger.

All shots were taken in my backyard in Richmond, Virginia’s Forest Hill Park area. Bird activity has increased as the weather has turned cold and rainy. House finches and sparrows remain the most numerous, but we still get a variety of birds each day, driven out of the river and forested areas surrounding the neighborhood as food becomes scarce. Quite a few of my neighbors have feeders in their yards, so the birds have plenty to choose from. It is interesting to note that some species of birds tend to stay in certain parts of the neighborhood.  I see maybe one or two mockingbirds at my feeders, but there are whole flocks of them in the churchyard a few blocks over.  When it rains, dozens of red winged blackbirds show up in my backyard, but ignore my neighbor’s yard about four houses away even though she has feeders and a more heavily wooded yard.

The rain always brings out flocks of red-winged blackbirds (Agelaius phoeniceus). No matter how hard it pours, these guys will show up to eat! 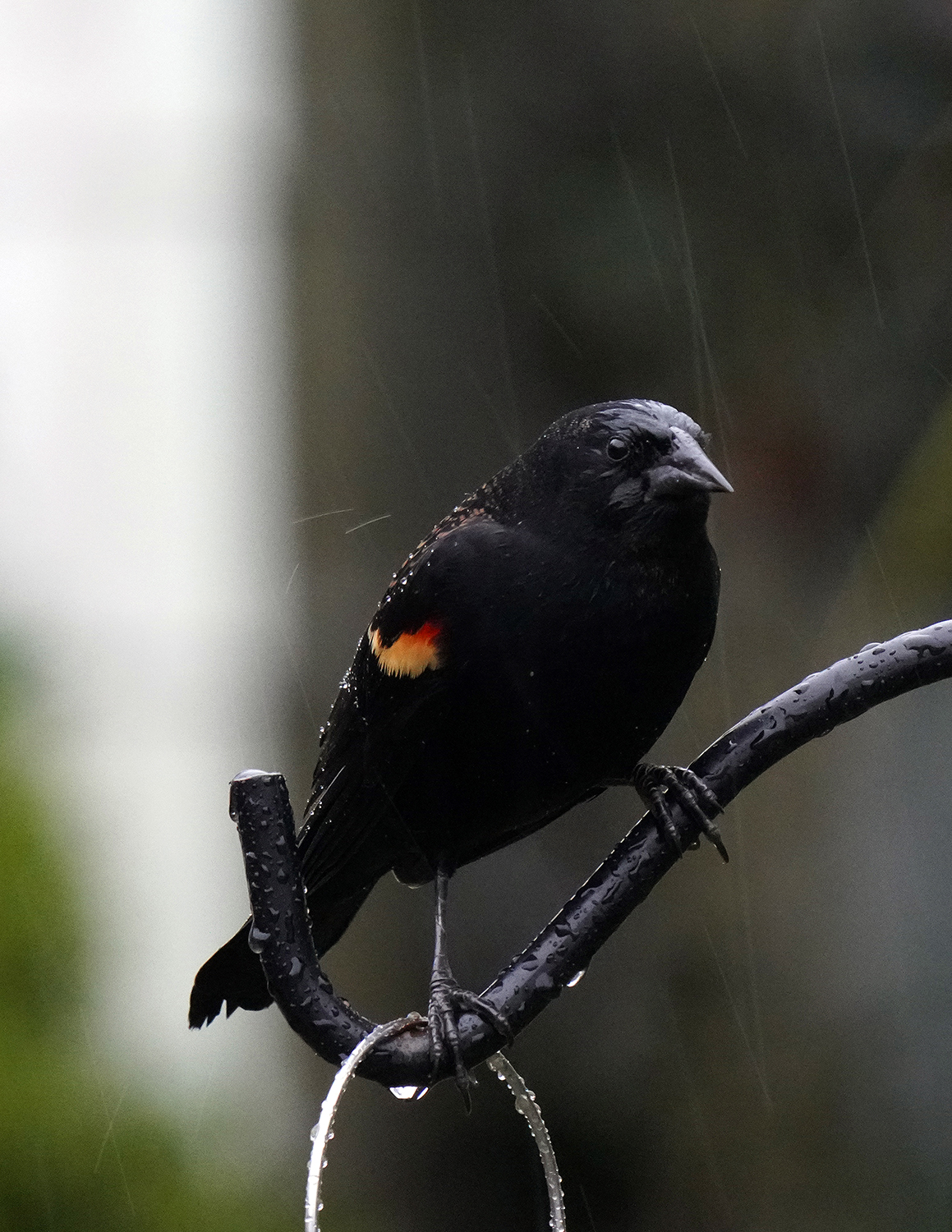 A female northern cardinal (Cardinalis cardinalis) waiting in the rain for the morning rush to die down. 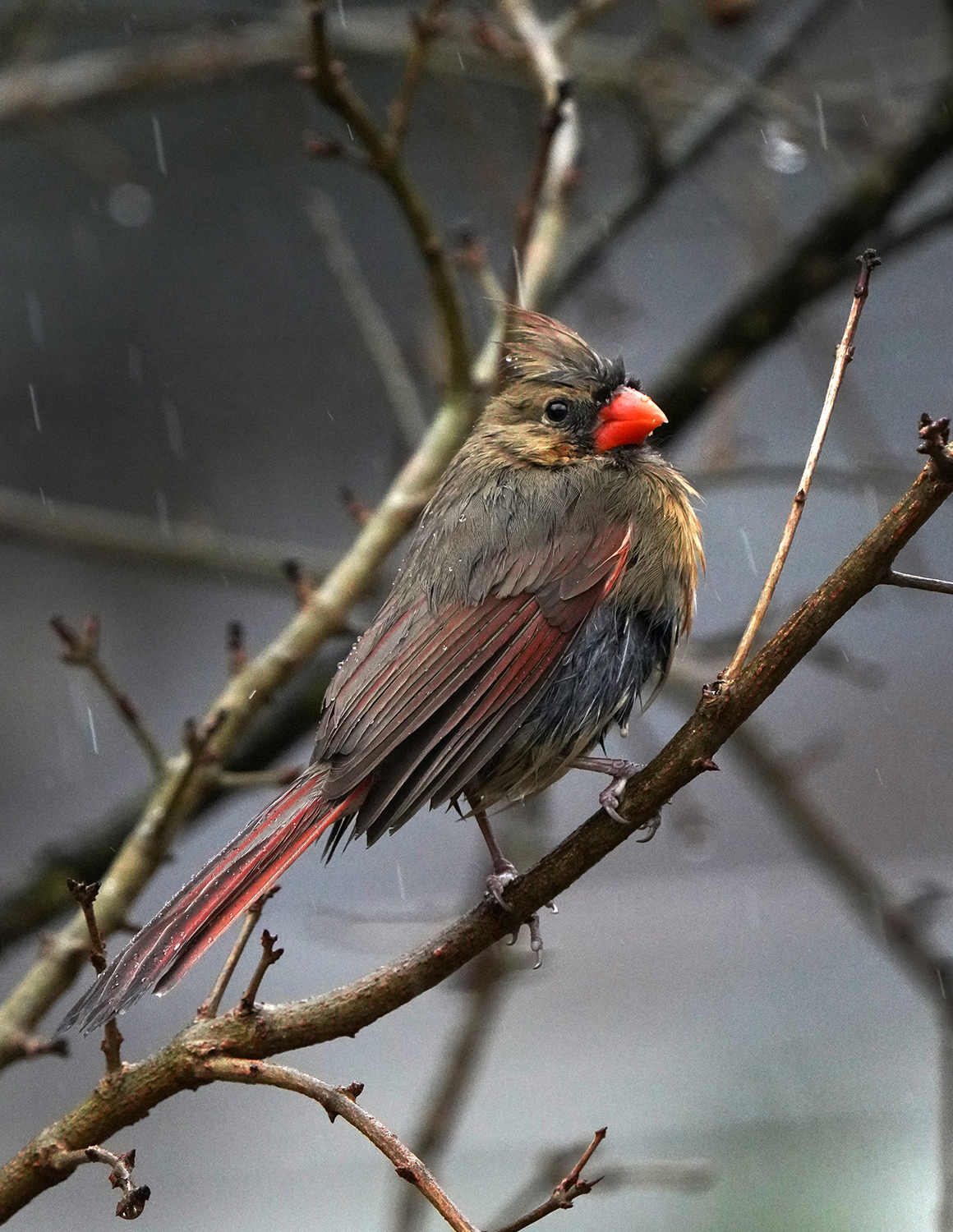 A male northern cardinal (Cardinalis cardinalis), also waiting for the mob to thin out before he grabs breakfast. 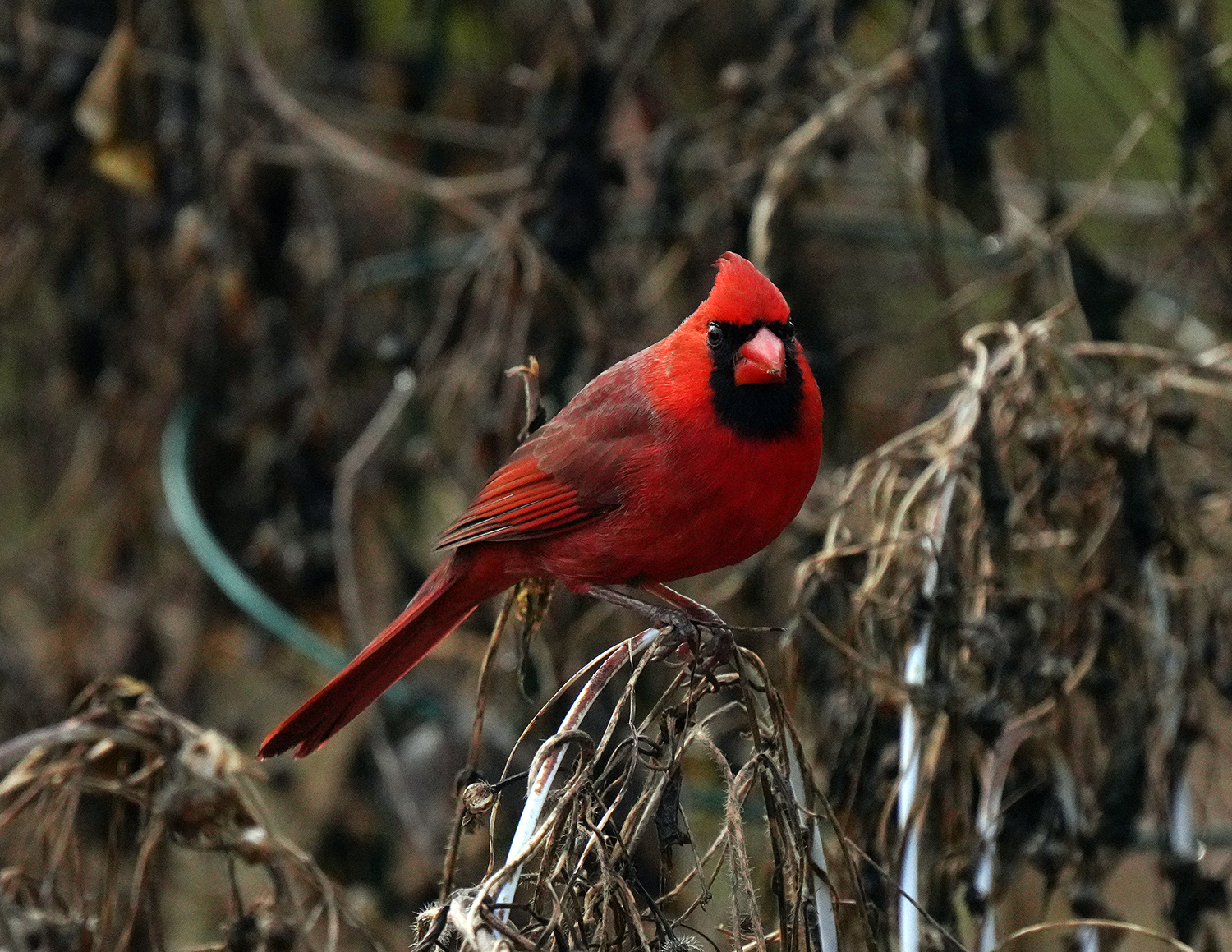 This female red-bellied woodpecker (Melanerpes carolinus) almost always goes for the seed feeders rather than the suet feeders that the other woodpeckers seem to prefer. She will dig around in the feeder until she locates a peanut, then quickly fly off with it. 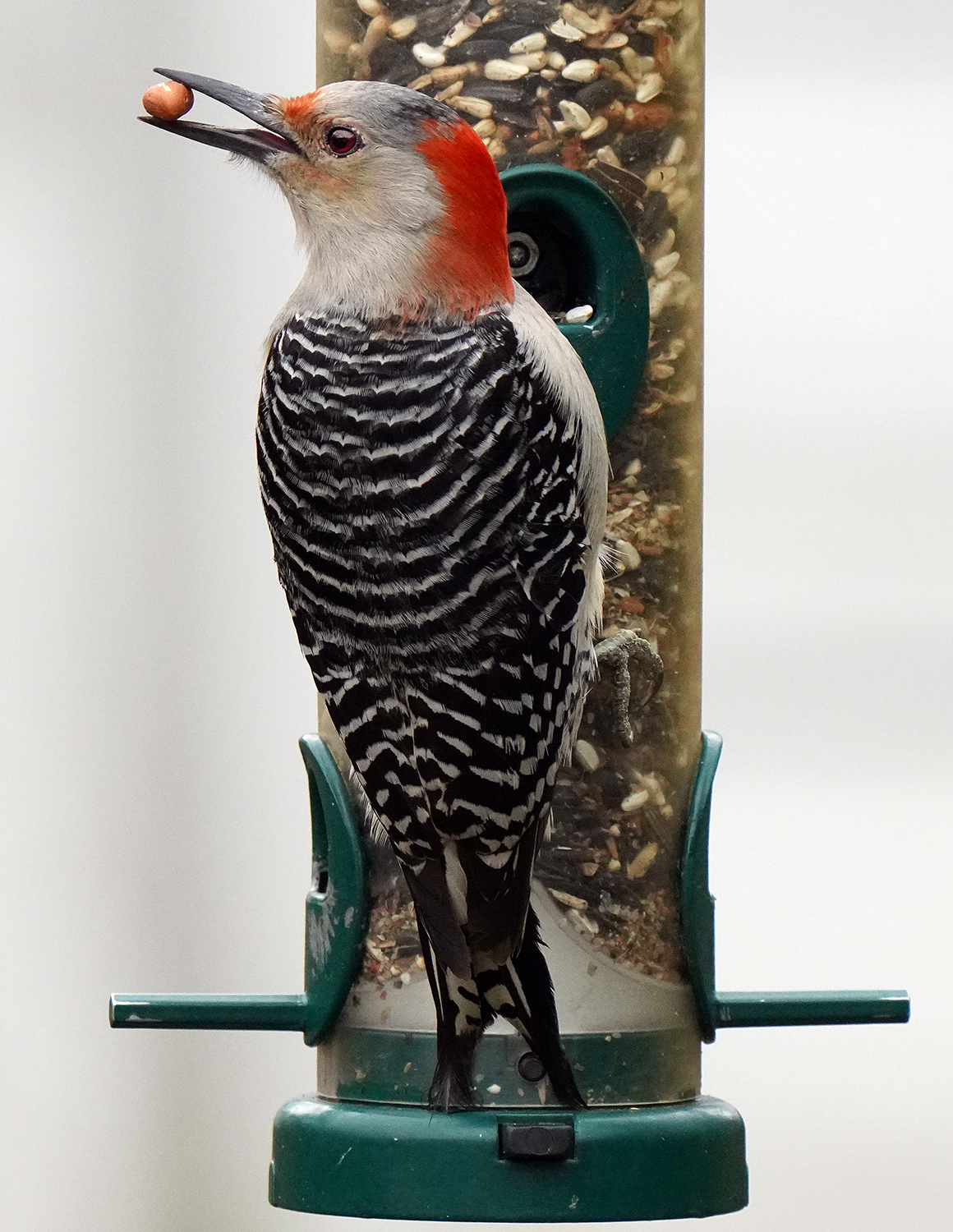 Peanut located, the woodpecker (Melanerpes carolinus) executes a barrel roll as she takes off. 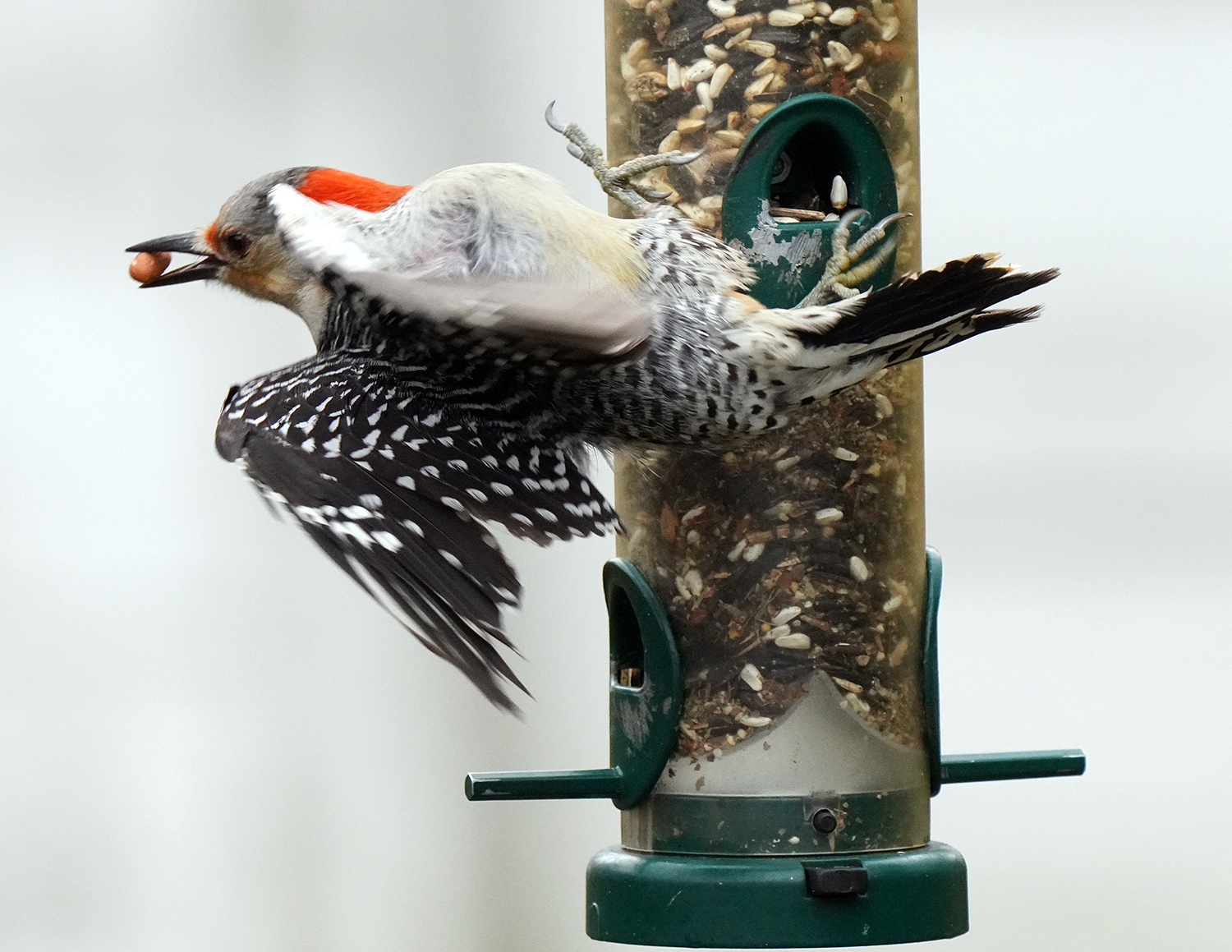 A blue jay (Cyanocitta cristata) scarfing down some suet. This one shows up almost every day now. 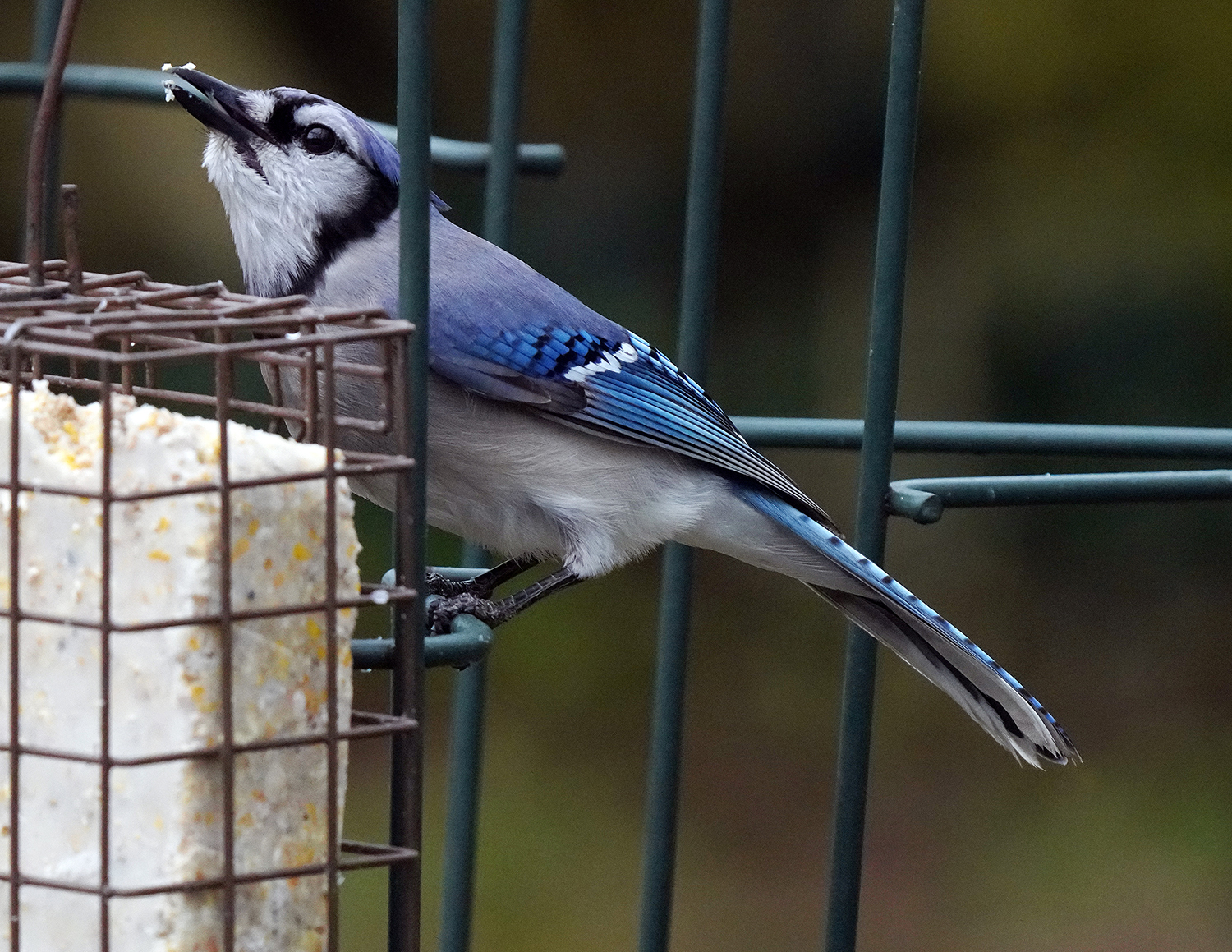 Ruby-crowned kinglets (Regulus calendula) are becoming regulars as the weather cools off. 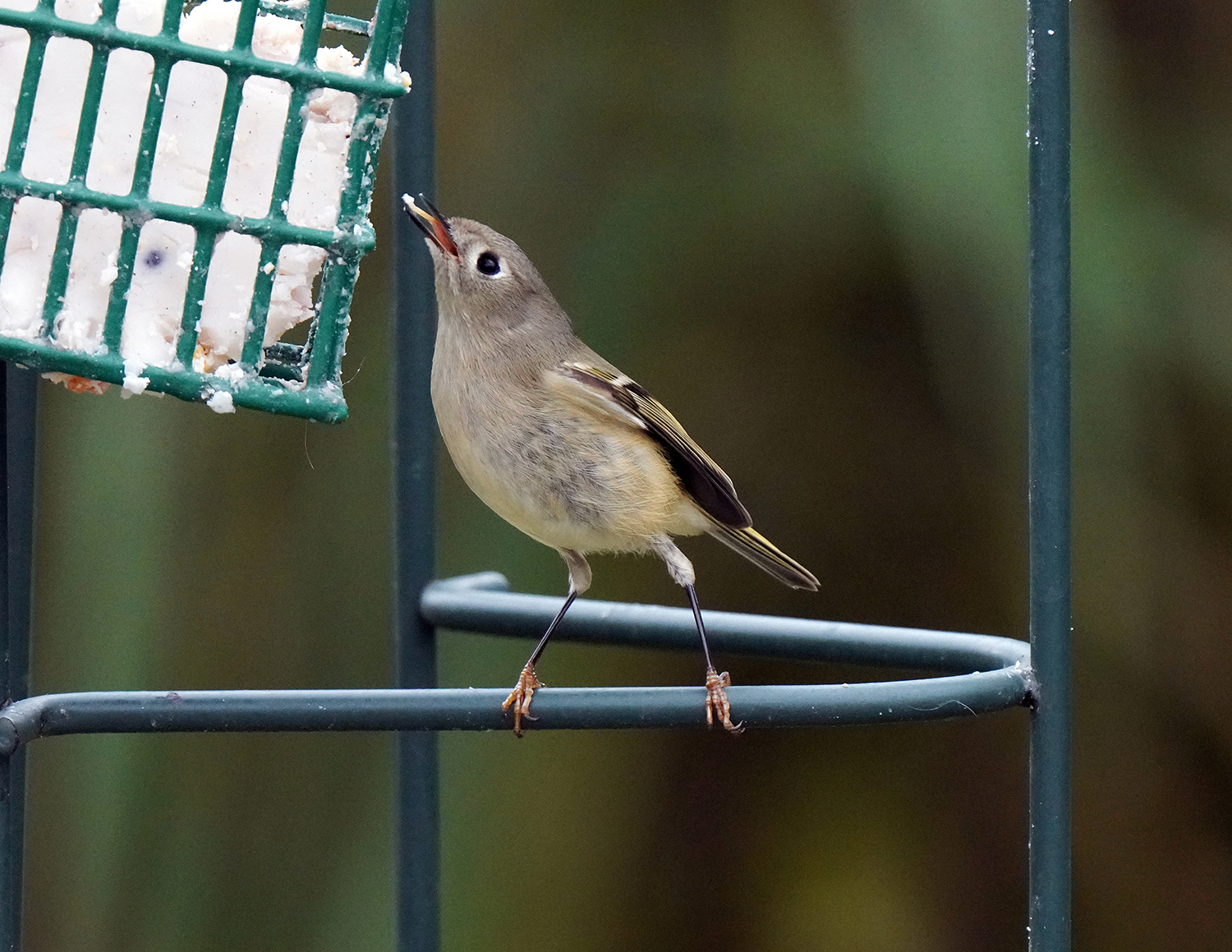 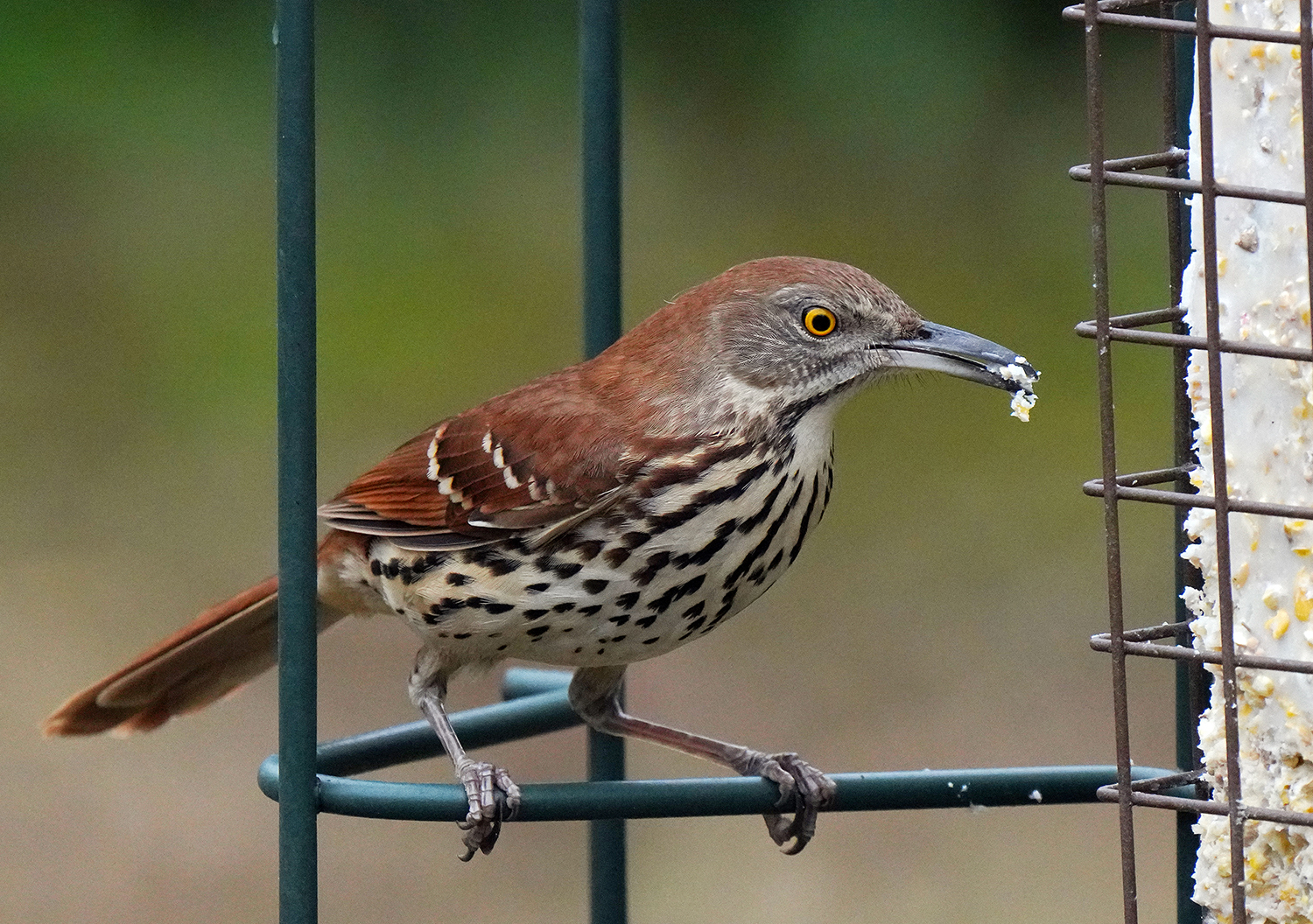 A house finch (Haemorhous mexicanus) taking off after a leisurely meal.  The finches will perch and eat, then just hang out on the feeders until driven off by other birds. 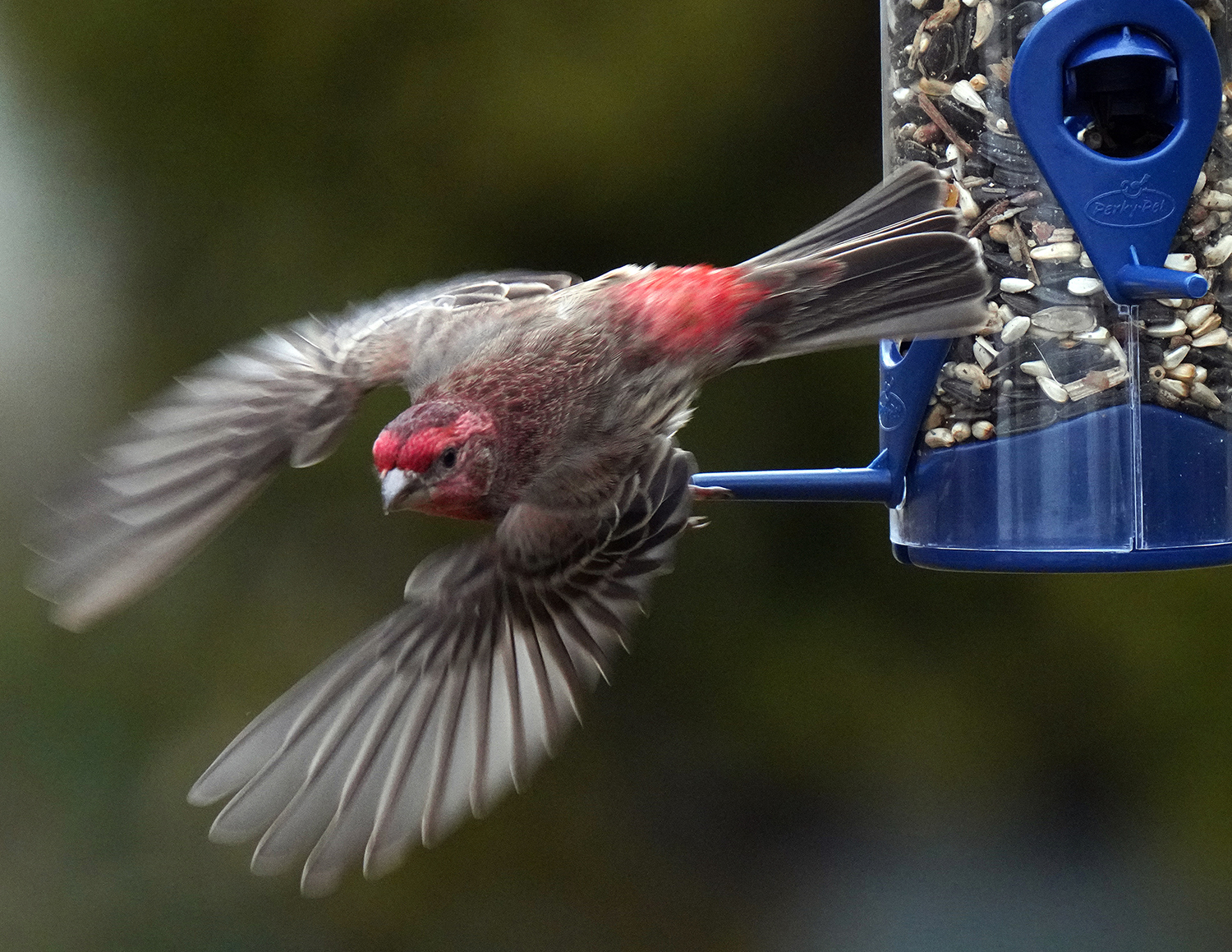 A downy woodpecker (Picoides pubescens). There are several of these little birds that are regulars. I have seen two males show up at the same time and proceed to chase each other around the yard. 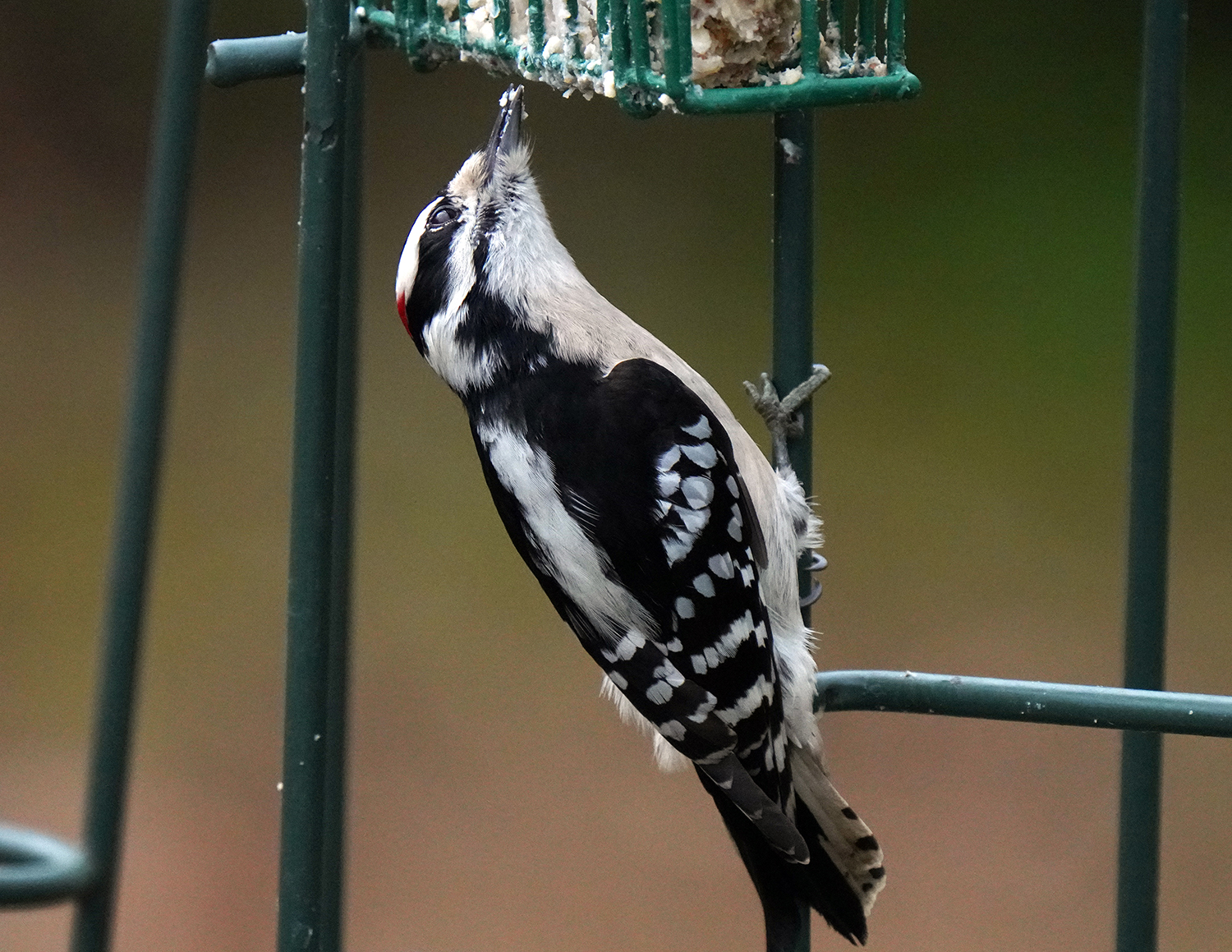 Female house finches (Haemorhous mexicanus) watching a demonstration of levitation by one of their crew. Actually, she is flapping her wings and hovering a bit, action frozen by the camera’s high shutter speed. 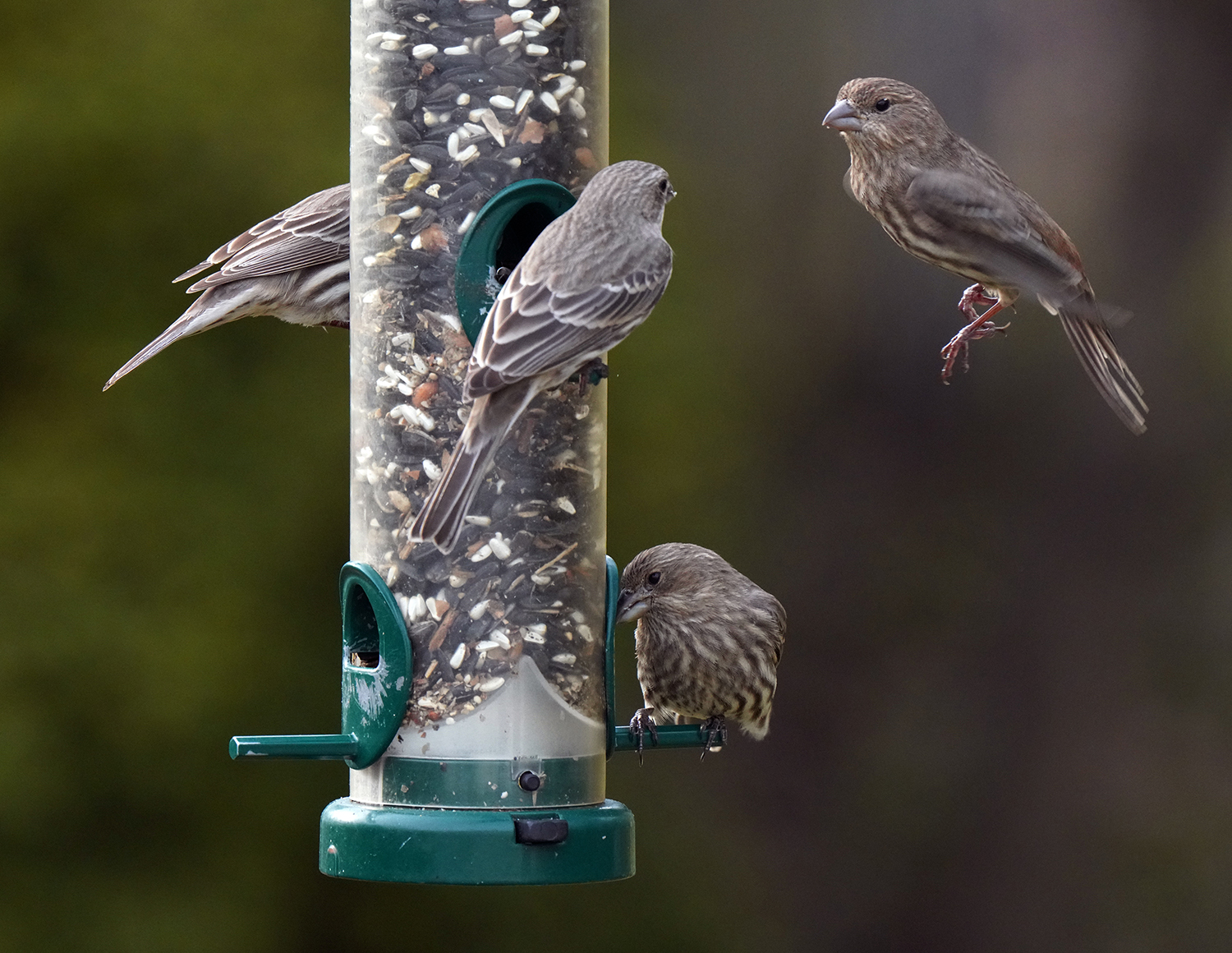 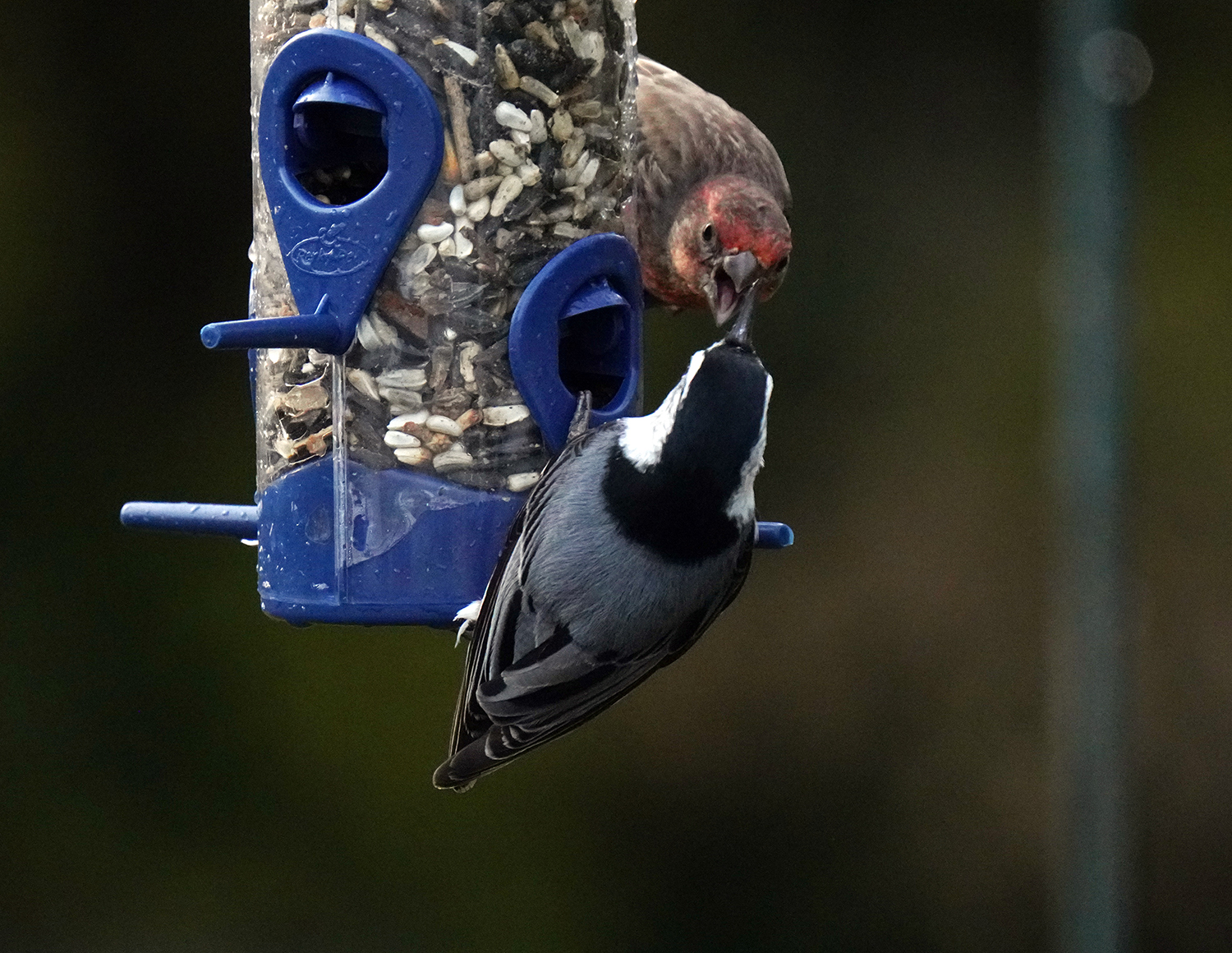 Despite having the advantage of a longer beak, the nuthatch (Sitta carolinensis) decides to retreat. 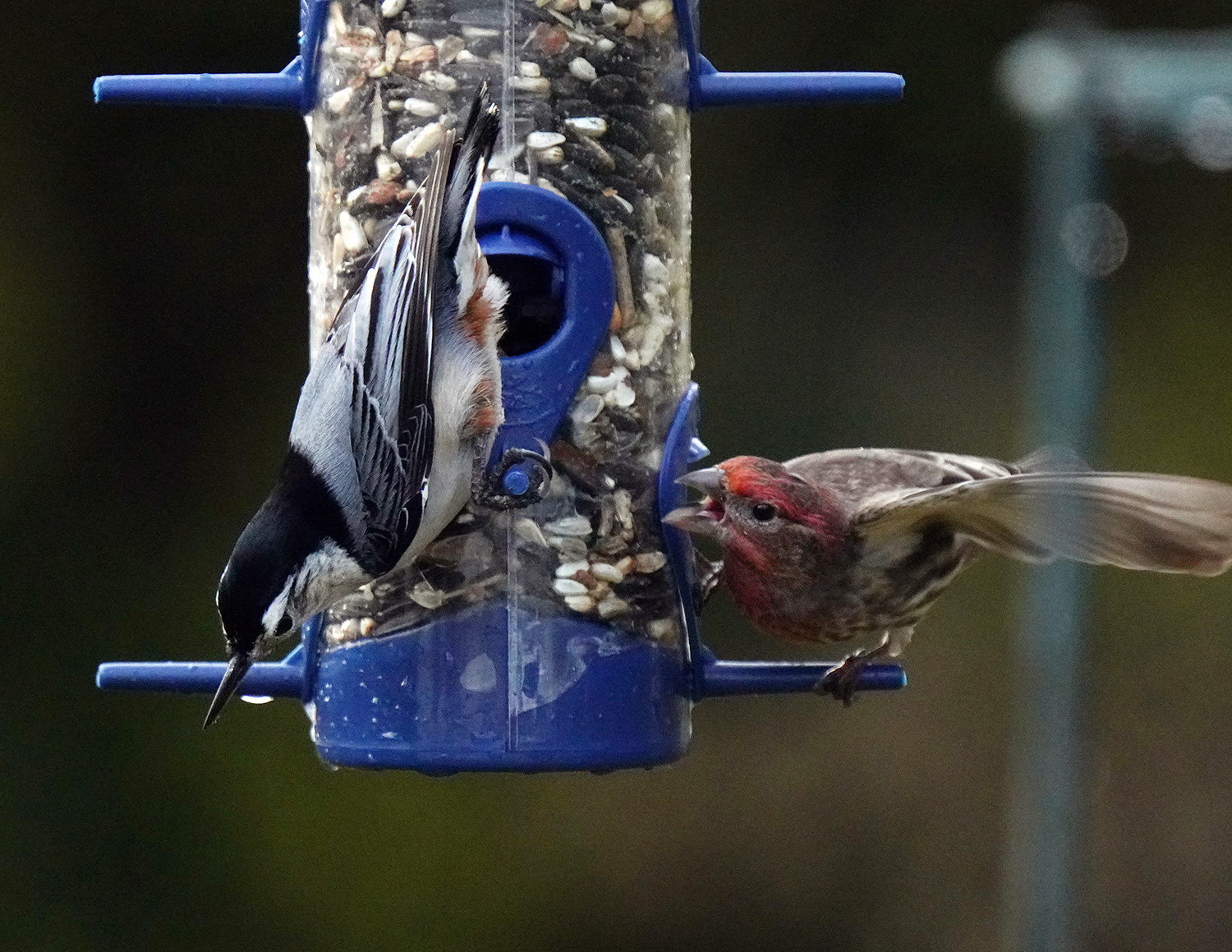 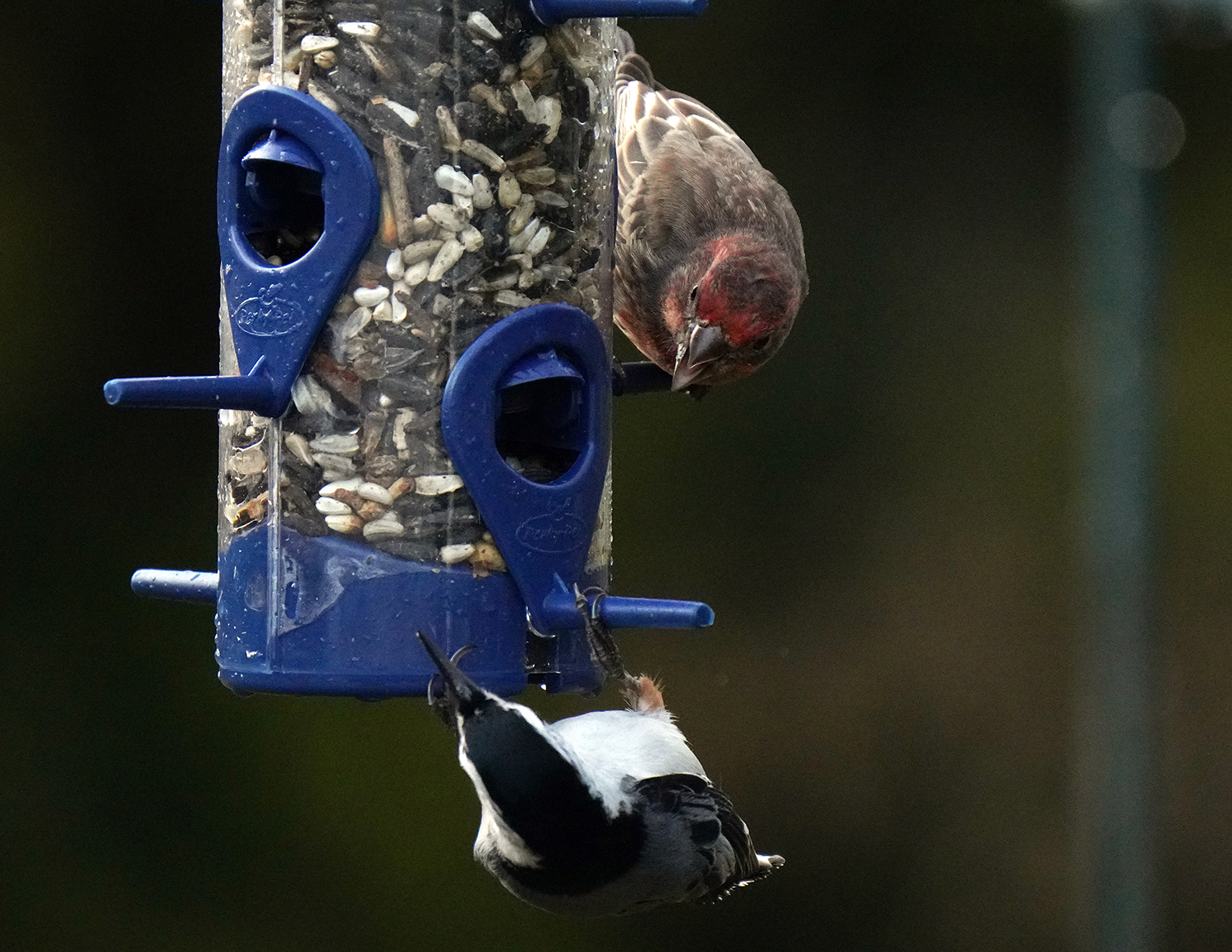 Victory! The nuthatch (Sitta carolinensis) snags the best nut of them all – the peanut! 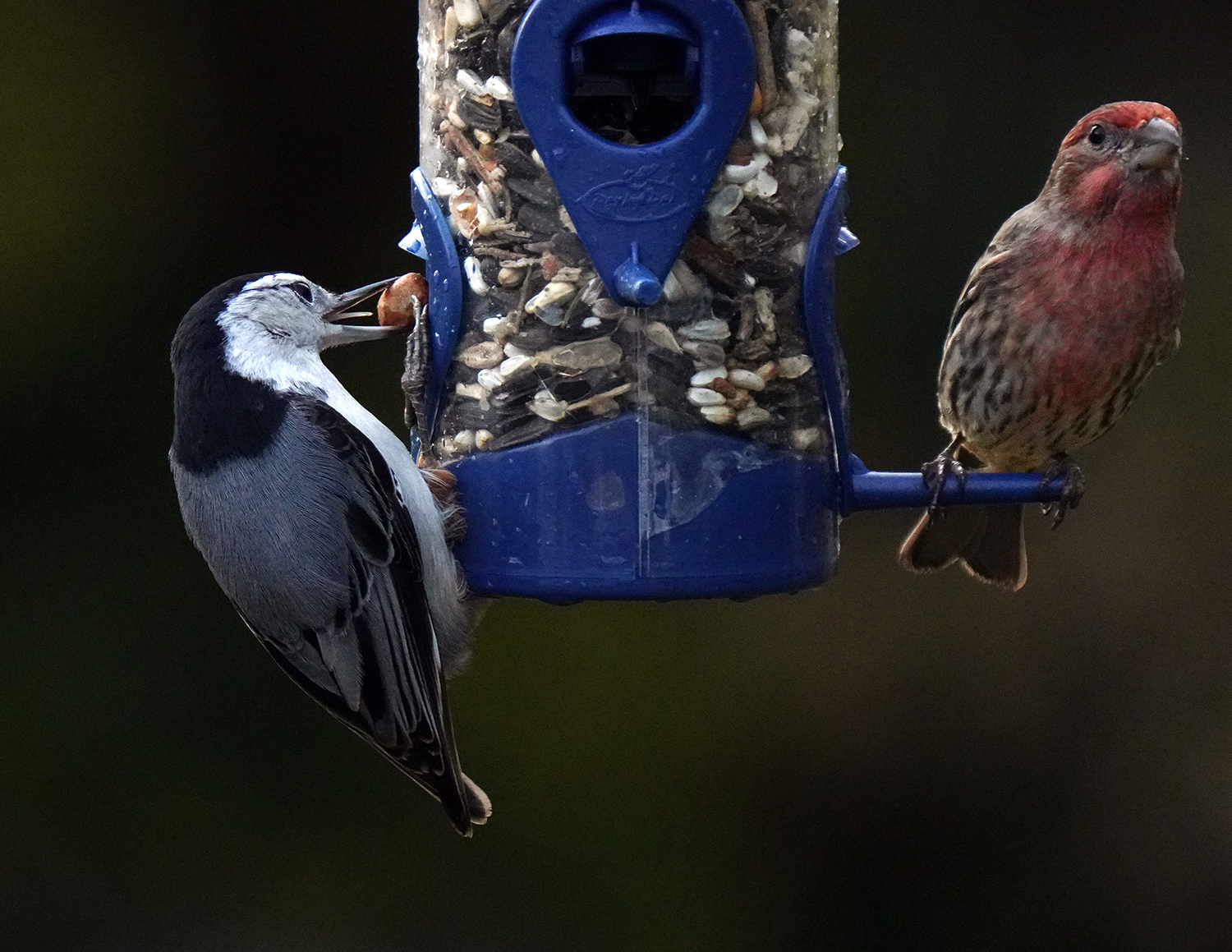 The eastern gray squirrels (Sciurus carolinensis) are in a feeding frenzy right now. They must sense winter coming. They have been showing up in groups lately and frantically eat from the suet feeders, then leap over to the seed feeders and then down to the seeds spilled on the ground. Unless I manage to drive them away, they will feed all day long. 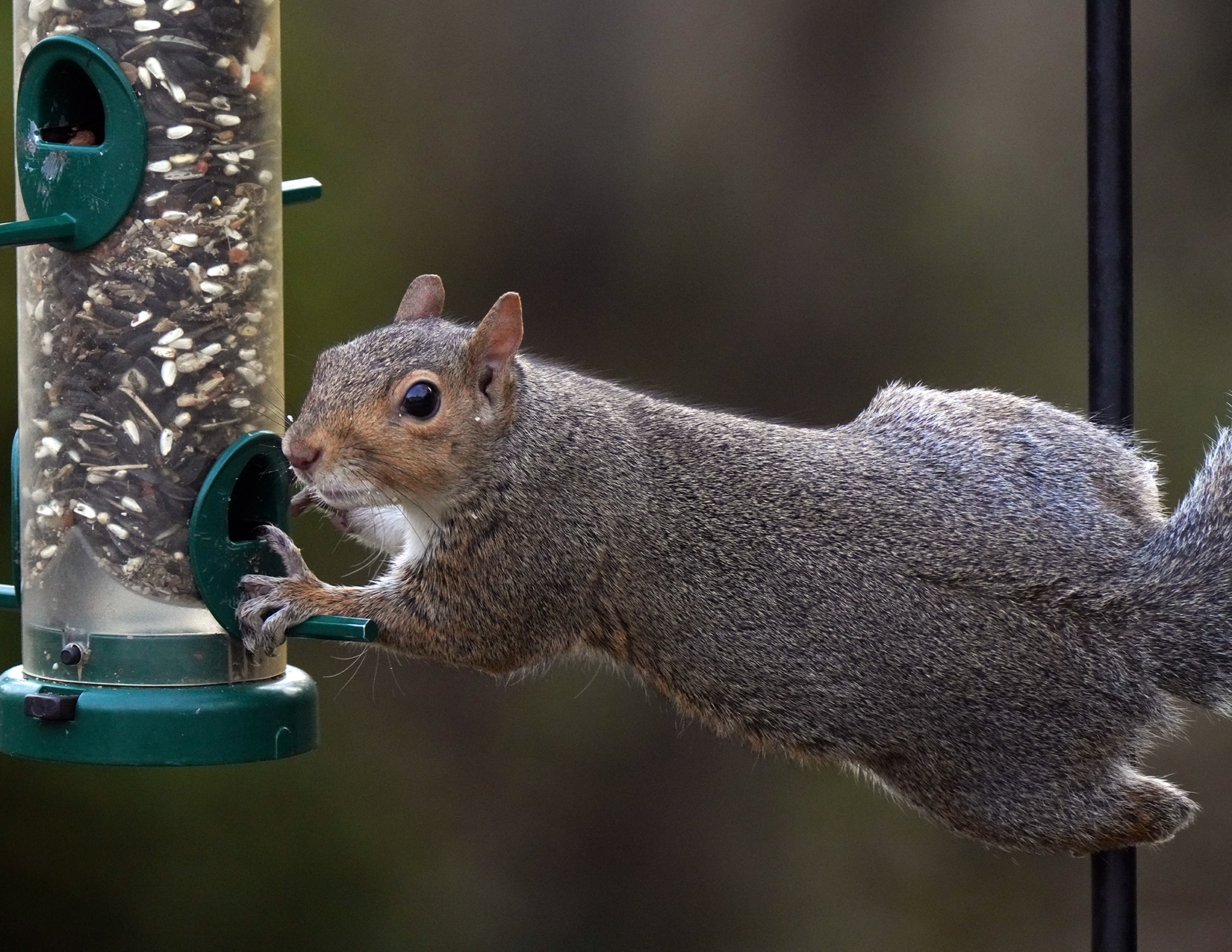