We now have a female version of George Bridges (the spineless President of Evergreen State): she is Kim Cassidy, President of the ritzy Bryn Mawr College in Pennsylvania. At that school, tuition, room and board will run you a cool $74,000 a year. (I just found out that Bridges has resigned and will be gone by June.)

As I reported in early December, there was a strike among students at nearby Haverford College after an October police shooting in Philadelphia of a black man, Walter Wallace, Jr., that led to demonstrations and riots in the city (see my reports on Haverford here and here). The student strike was inevitably accompanied by a laundry list of demands, to which Haverford caved (granted, some demands were reasonable, but most weren’t given that the institution was not racist).

There’s no evidence that Bryn Mawr was racist, either. Until the killing of George Floyd, the Philadelphia shooting, and then the strike at nearby Haverford, there were no accusations of “systemic racism” at Bryn Mawr or demands for institutional change. In solidarity with Haverford, most Bryn Mawr students also went on strike on October 28, not attending classes and shaming or bullying those students who wanted to go to class and those professors who still held them.

The story of this strike and its sequelae is recounted by the mother of a Bryn Mawr student, who understandably used the pseudonym “Minnie Doe” when she wrote the piece for Quillette below (click on screenshot). It is the usual story, but related eloquently, of entitled students using racial unrest to leverage power, turning a non-racist school into a Critical-Theory-oriented antiracist school in which dissent is brutally suppressed. Doe says her child will be leaving Bryn Mawr now that it’s become toxic. The title of my own piece above comes from Minnie’s angry characterization of the school (see below). 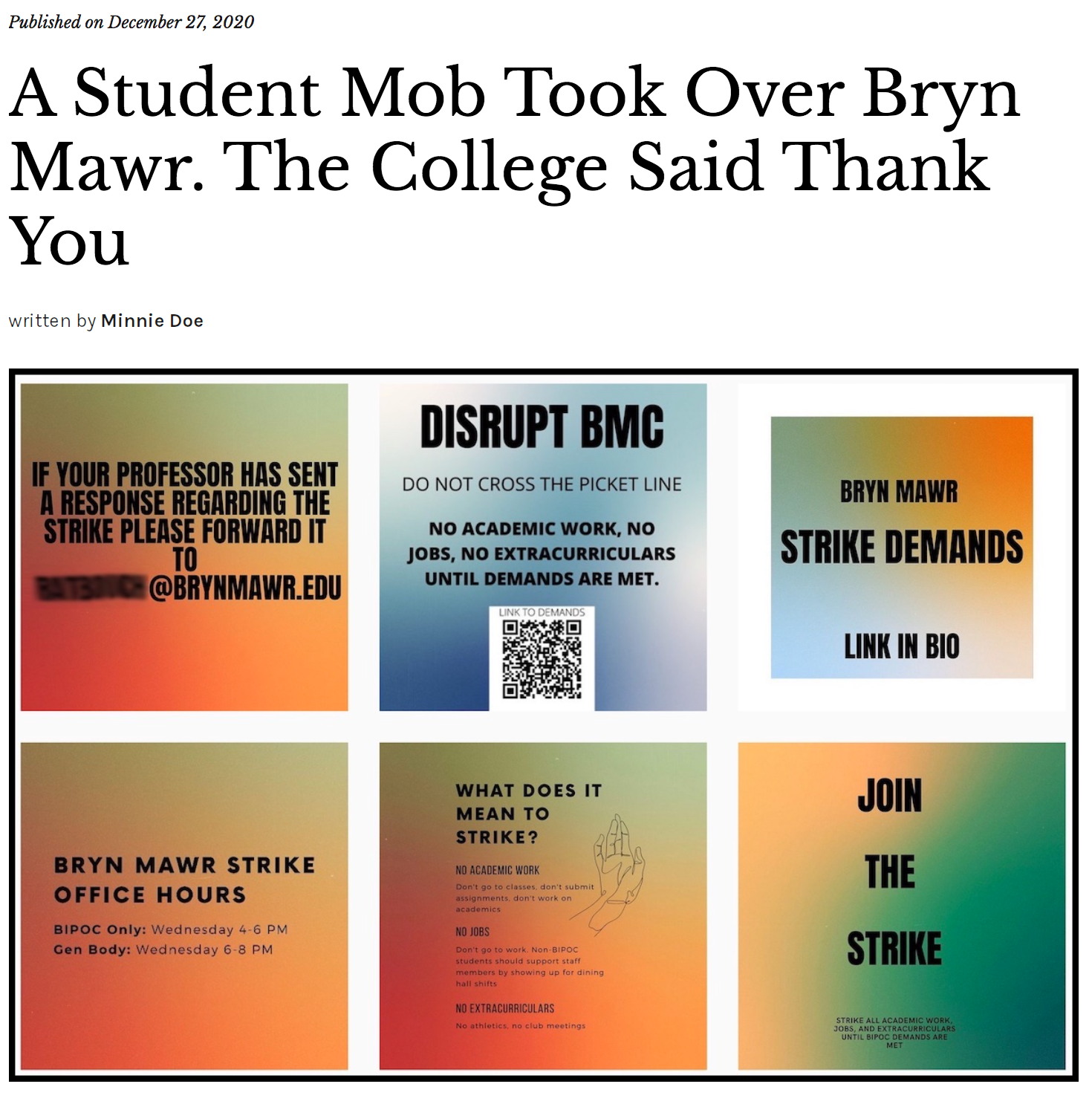 Just a brief summary.  At first, President Cassidy showed some spine, announcing that classes would resume quickly and that students were expected to attend them. She also decried the “shaming” and “acts of intimidation” against faculty and staff by the student strikers. But she later apologized for those words when she and her administration completely capitulated to the student demonstrators.

The students produced a 23-page list of demands (it took over an hour to read them to the President), and then had a Zoom meeting with administrators in which the students’ faces didn’t appear but the administrators’ did.  As you can see from the video below, President Cassidy, faced with a bunch of angry students, simply crumpled and said she’d meet all their demands. She added that she would resign, along with the Provost and another dean, if they didn’t meet the demands to the students’ satisfaction.

Do listen to this:

Below are the University’s response to the student demands (click on screenshot to see full document), listing each demand, how Bryn Mawr would meet it, when it would be met, and how much it would cost. Some of the demands aren’t totally wacko, like removing the picture of a former President who was indeed a racist and anti-Semite, but most of the others are an incursion of critical theory into a University, stifling the spirit of inquiry of once-admired institution.

I’ll highlight some of the demands as well as the timeline and budget allocated by Bryn Mawr to meet them.

First, the customary requirement for courses in diversity and equity: 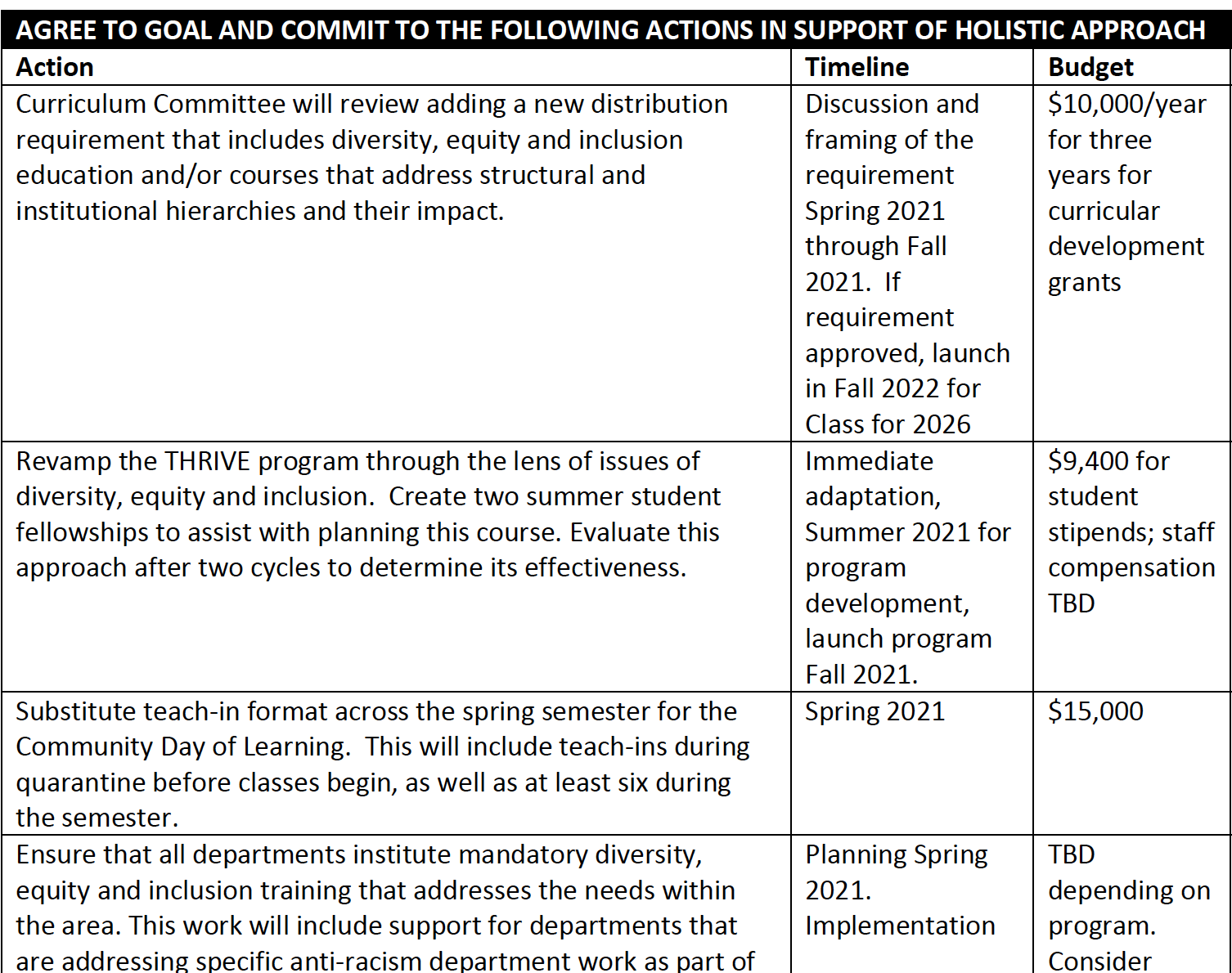 These “reparations” may be illegal, as they bestow preferential resources on black and indigenous students:

Labor acknowledgments. But how does the college determine whose labor is “unseen”, and isn’t there labor of non-black people that’s also unseen?

The striking students who abandoned their paid jobs at the college nevertheless demanded to get paid. The school agreed:

There were the usual calls to abolish the police, which the university is studying. Further, those students who do community work on racism as part of their studies will now get paid for it, though presumably “outreach” students who don’t work on racial justice don’t get paid: 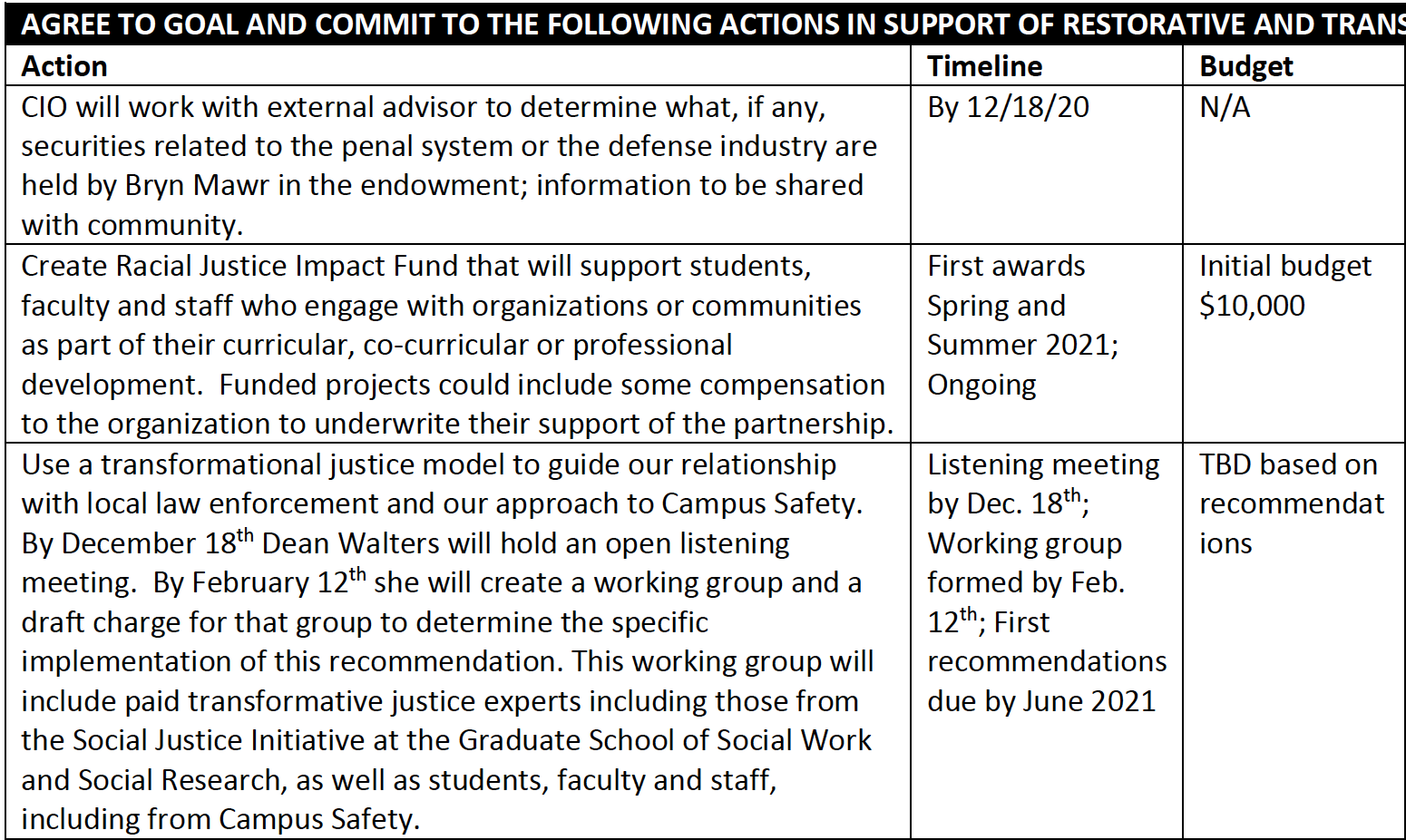 There’s other stuff that I won’t list, but the final one is a demand for “grade protection”: that is, students didn’t want to get lower grades if they didn’t do their classwork during the strike. And yes, the administration caved on this one, too. Minnie Doe said this about the demand below:

Far from facing consequences for ruining the fall, 2020 semester, strikers have been lavishly praised by the school’s president and continually assured that their grades won’t be impacted. Some professors have even agreed to accept what they call “strike work”—conversations with friends and family about racism, diary entries, time spent watching anti-racism documentaries, and so forth—in lieu of actual course work, even in math and science programs. Additionally, the college has instituted a credit/no-credit policy that will allow all students to choose up to four courses this year that won’t factor into their GPA.

The strike lasted 16 days. In its aftermath, and amidst the wreckage that is now Bryn Mawr College, “Minnie Doe” wrote this assessment:

As for the majority of students who came to Bryn Mawr to actually receive an education that goes beyond anti-racist bromides, they’re out of luck. The same goes for parents who ante up $54,000 a year for tuition (and another $20,000 for room and board). Kim Cassidy now presides over what is essentially the world’s most expensive anti-racism YouTube training program. Putting aside the disgrace associated with her cowardice, not to mention the outright abdication of her educational mandate, this also happens to be a massive rip-off for families, many of whom are spending their life savings so that a child can attend this once-esteemed institution.

What these students have learned—at a Quaker-founded institution no less—is that might makes right, that discussion and debate are for racists, and that the middle-aged elites who run society’s most prestigious institutions will sell them out for their own public-relations convenience, all the while publicly thanking the social-justice shakedown artists who engineered their own humiliation, thus incentivizing more tantrums in the future.

“We’re all gonna be here for only four, maybe five years, so nobody really gives a damn about Bryn Mawr in the long run,” said one anonymous strike leader at a November 9th sit-in event. It’s an appalling sentiment. But unlike President Kim Cassidy’s groveling communiqués, it at least has the benefit of being honest.

Here’s a sign, which I’ve shown before, pasted on the entrance to Bryn Mawr’s Park Science Building in November. Cultural revolution, anyone? 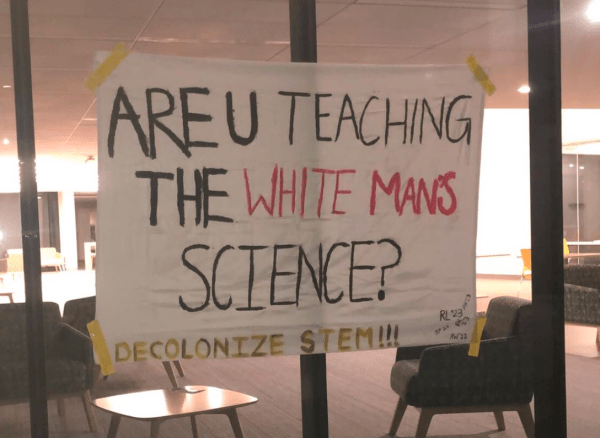