On December 5 I described the meltdown happening at ritzy Haverford College (tuition: $57,000 per year, total expenses $76,000 per year) following a police shooting of a black man in nearby Philadelphia. The students went on strike and issued a long series of demands to the College, as outlined in my article and in an informative piece in Quillette by Jonathan Kay.

What was remarkable about the Haverford protests was how readily the administration caved in to the student demands, which comprised the usual laundry list of no punishments for strikers, more money for diversity initiatives, defunding the police, changing the curriculum, the institution of pass-fail grades, the creation of ethnically segregated spaces, and getting rid of the President (he’s now resigned). It seems that the students suddenly discovered the university’s “systemic racism”, which wasn’t a problem before the shooting (see Kay’s article about the harmony that used to reign at Haverford), and used this discovery to try getting everything they wanted.

The response of Haverford administratores, who cringingly abased themselves online, was in strong contrast to the response of nearby Swarthmore College (equally ritzy), whose black President, Valerie Smith, basically told the students to bugger off and stop making anonymous demands instead of engaging in civil discourse.

And, by and large, the Haverford students won. An article at the Haverford Clerk, the College’s independent student newspaper (click on screenshot below) recounts the administration’s surrender and links to a list of the students’ demands and the administration’s item-by-item responses, with the vast majority of those responses being “yes, we will.” 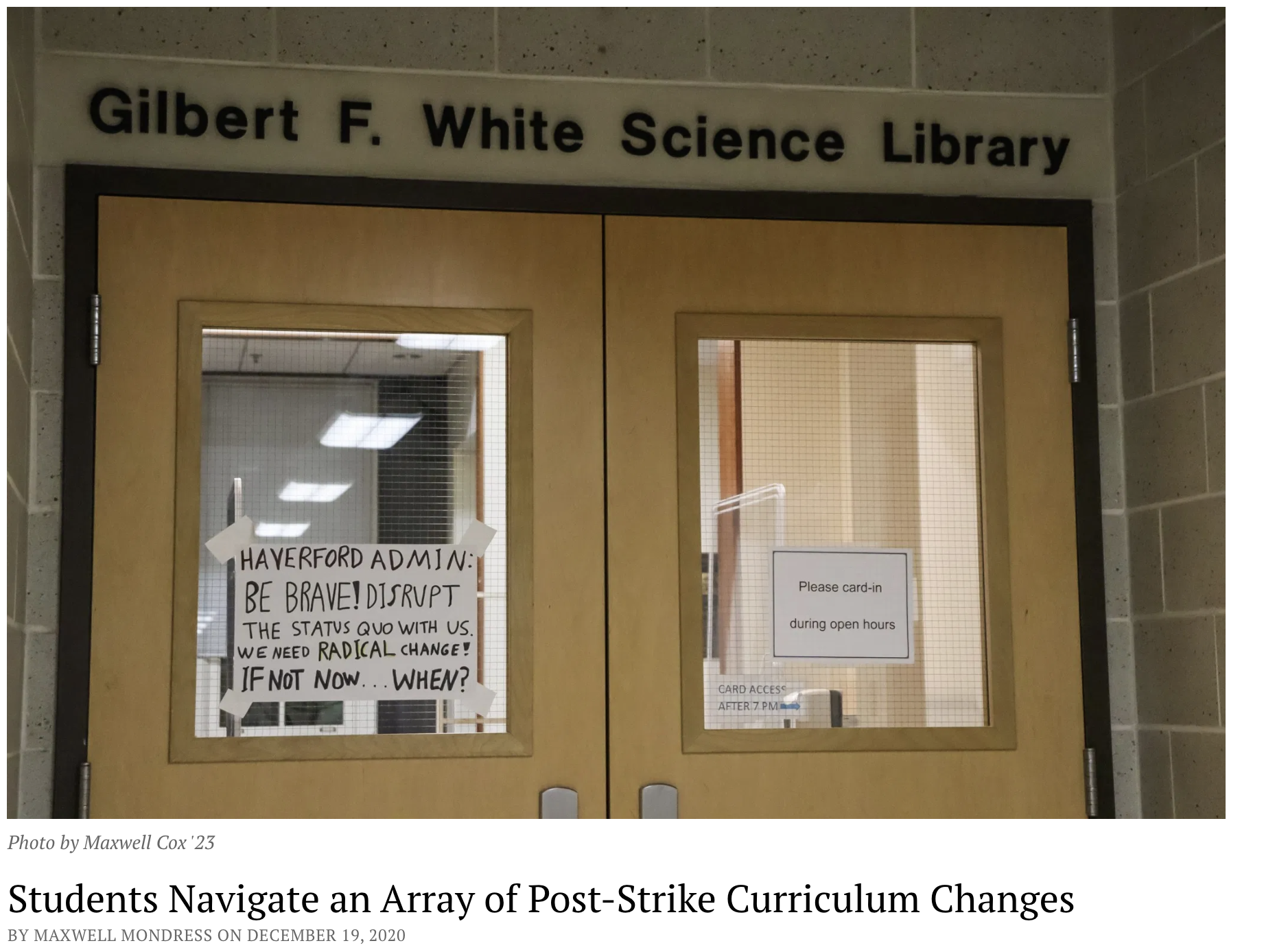 I’ll give only one excerpt from the newspaper piece, which saddens me since it’s about the Biology Department. Heretofore science departments have been resistant to or not interested in changing themselves to fit student demands for a social-justice curriculum, but that’s changing (it’s also changing at the University of Chicago). The excerpt:

Without any overarching guidance from the administration, faculty members took a number of different approaches to respond to the two-week interruption in classes caused by the strike and finish the semester.

One notable response came from the Biology department. Before the strike had even ended, the department had discontinued classes for the remainder of the semester in order to focus on redesigning the curriculum with equity and inclusion in mind. All classes, including thesis sections, were canceled outright. The department adjusted thesis requirements and deadlines to reflect this change.

Yet students in most biology classes still completed the entirety of their coursework for credit—just without traditional in-class hours. Instead, students learned from classes recorded in-person last year. Students requiring in-class hours for visas, alongside all students interested in participating, were able to participate in a credit-bearing seminar entitled “Crafting an Inclusive Biology Curriculum”.

No in person biology classes at all! You can get credit for last year’s classes, but they’re old ones, and online. Instead, the biology department retreated to develop a curriculum centered on “equity and inclusion”. And, for students who needed in-person classes to meet visa requirements, they could take—no, not evolution or genetics or physiology or molecular biology—but “a credit-bearing seminar entitled ‘Crafting an Inclusive Biology Curriculum’”.  What a waste of a chance to learn biology! The purpose of a biology department, which I shouldn’t need to recount here, is to teach students biology, not inculcate them with the tenets of Critical Race Theory. And you just know what that new curriculum will be like!

Oh, one more excerpt, which involves those professors who decided to keep having classes and giving assignments during the strike:

On the other hand, some professors never canceled class during the course of the strike and pushed ahead as they originally planned. If and how students were allowed to make up work varied from class to class.

“There was no guidance and no support,” said one student, who found themself [JAC: is that an error or a new pronoun? I suspect the latter, but shouldn’t it be “themselves”?] weeks behind their classmates who didn’t participate in the strike after their professor chose not to cancel class and move deadlines for assignments. “I felt that not only had I missed materials presented in lectures, but in independently making up materials, I was unable to analyze it at the same level,” they explained. “The quality of education that I received drastically fell because of the professor’s unwillingness to support the strike.”

That last sentence would be hilarious if it weren’t so sad. If the professor supported the strike by canceling classes and exams, the plural student would also have a lower quality of education, for there would be nothing to learn! As it is, there were classes, the student decided not to attend, and the student is beefing because of their own decision. At least there was a chance to learn something!

The demands (note the claim that “this body will not be punitive”): 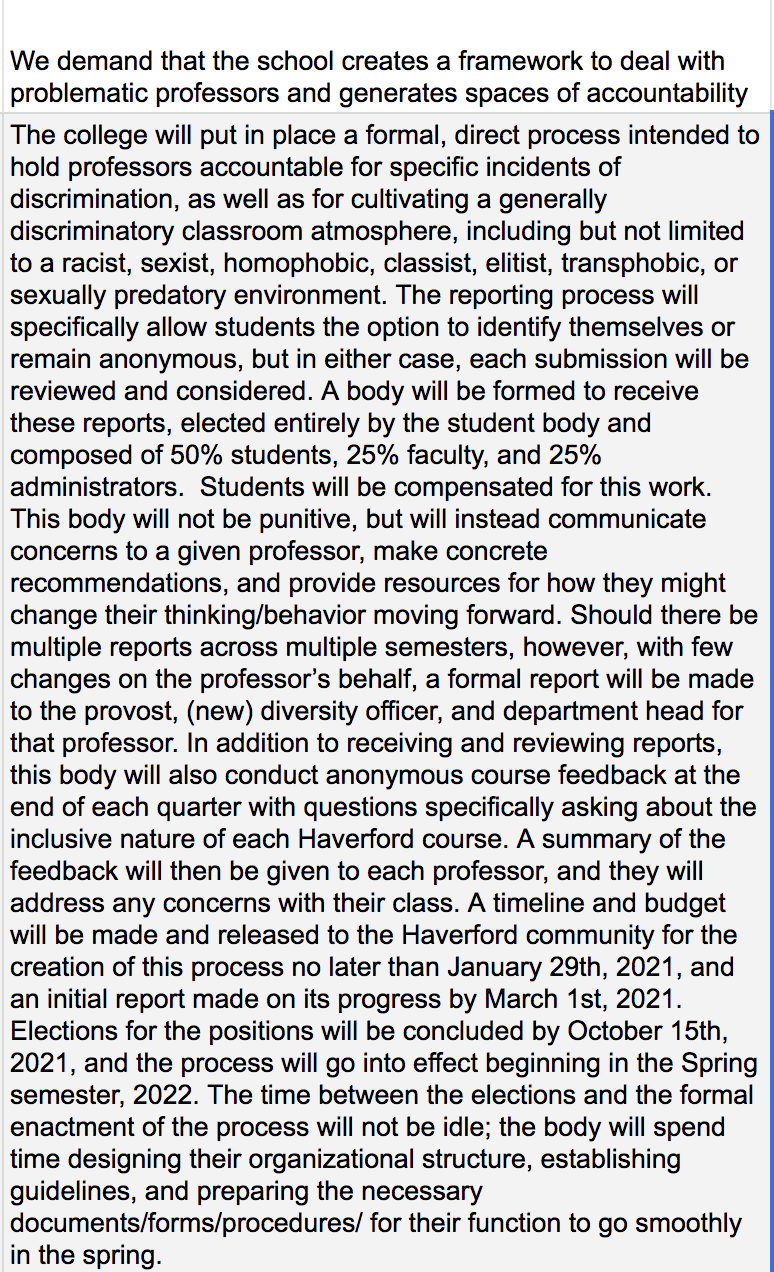 Good Lord! If I were looking for a job as a biology professor now, I sure as heck wouldn’t consider Haverford—knowing that the students would constantly be watching me to ensure that I wasn’t an ideologically “problematic professor.”  Nor would I want to have to center my class around “inclusivity”: I’d just teach evolutionary biology the way I’ve always taught it, giving the best view of current knowledge I could.  If that’s not inclusive enough, I’m not sure what would be. But maybe that already makes me “problematic”. I teach everyone the same, and I treat all my students the same. To me, that’s the best I can do to adhere to inclusivity and equality.

But do parents really want to fork out nearly a third of a million dollars to buy this kind of “education” for their students?

34 thoughts on “Haverford publicly caves in to its entitled students”