If humans harvest an animal or plant, especially if they harvest it heavily, the species often evolves to make itself less “harvestable”.  For example, commerical fisheries that take the larger fish in the sea have led to the evolution of individuals that mature earlier at a smaller size, for it is the small reproducing fish who don’t get caught. Elephants harvested for their ivory have, in some populations, evolved smaller tusks or even tusklessness, for it’s the tuskless elephants who leave more offspring. (The condition for all such evolution, of course, is that the evolved conditions have at least a partial genetic basis.)

Finally, there’s a similar phenomenon called “Vavilovian mimicry”—named after the great Russian geneticist and botanist Nikolai Vavilov, who was imprisoned by the Soviets and died in the gulag because he dared to embrace Western genetics and science against the teachings of the charlatan Lysenko.

In Vavilovian mimicry, weeds are selected among agricultural crops with which they grow to get themselves in the next generation of the crop. Farmers have mechanical ways to sort out the weed seeds during harvesting, and this imposes selection on the weeds to produce seeds of the same size and shape as the crop; it’s those mutant weed seeds that get replanted the next year.

A cool and famous example is how the common vetch (Vicia sativa), a weed, has evolved in crop areas so that its seeds come to closely resemble that of the edible lentil (Lens culinaris), a crop that the weed infests.  Because lentil seeds, which are what’s eaten, are tasty but vetch seeds are bitter, farmers have used mechanical and visual sorting to discard the wild vetch seeds. Over time, the vetch seeds have undergone what’s called “unnatural selection” (for Vavlovian mimicry) to have the same size, color, and shape (flattened) as the lentil seeds. Here’s a diagram showing the cultivated lentils (A) along with the wild vetch seeds growing on their own (B), and the seeds of the same vetch, but which have grown in lentil fields. Look at the big evolutionary change in the vetch seeds!:

Today we have another example of plants mimicking other things—in this case the environment—to hide themselves from being harvested.  Fritillaria delavay, is a perennial alpine Asian plant that grows from a bulb, living about five years. The bulbs, particularly the small ones, are very prized in Chinese medicine, especially for treating tuberculosis, fetching up to nearly $500 per kilogram. (Since they’re small, it takes about 3,500 bulbs to make a kilogram.) They are picked visually, with harvesters looking for the bright green leaves and flowers of the plant that stand out against their rocky background.

Since harvesting is heavy, you can guess how the plant evolved. That evolution is documented in this new paper in Current Biology (click on screenshot below, or go here to get the pdf, both of which are free).  If you want a journalistic summary, there’s one in the Times and another in the Guardian.

In short, the plant has undergone evolution of both leaf and flower color to make it more inconspicuous and thus harder to find and harvest (harvesting, since it takes the bulb, kills the plant). You’re more likely to reproduce if you’re not seen, and in harvested areas those plants with mutations making them match the background better are those that survive. Herbivores apparently aren’t involved in this system, as nothing has been observed to eat the plant, which is full of alkaloids and toxic.

Here are pictures F. dlavayi in an unharvested area (left) and one in an area heavily harvested (right). You can guess which is which. Note the difference in the color of both leaves and flowers. In fact, the green color can evolve to either reddish, brownish, or grayish colors depending on the color of the background. 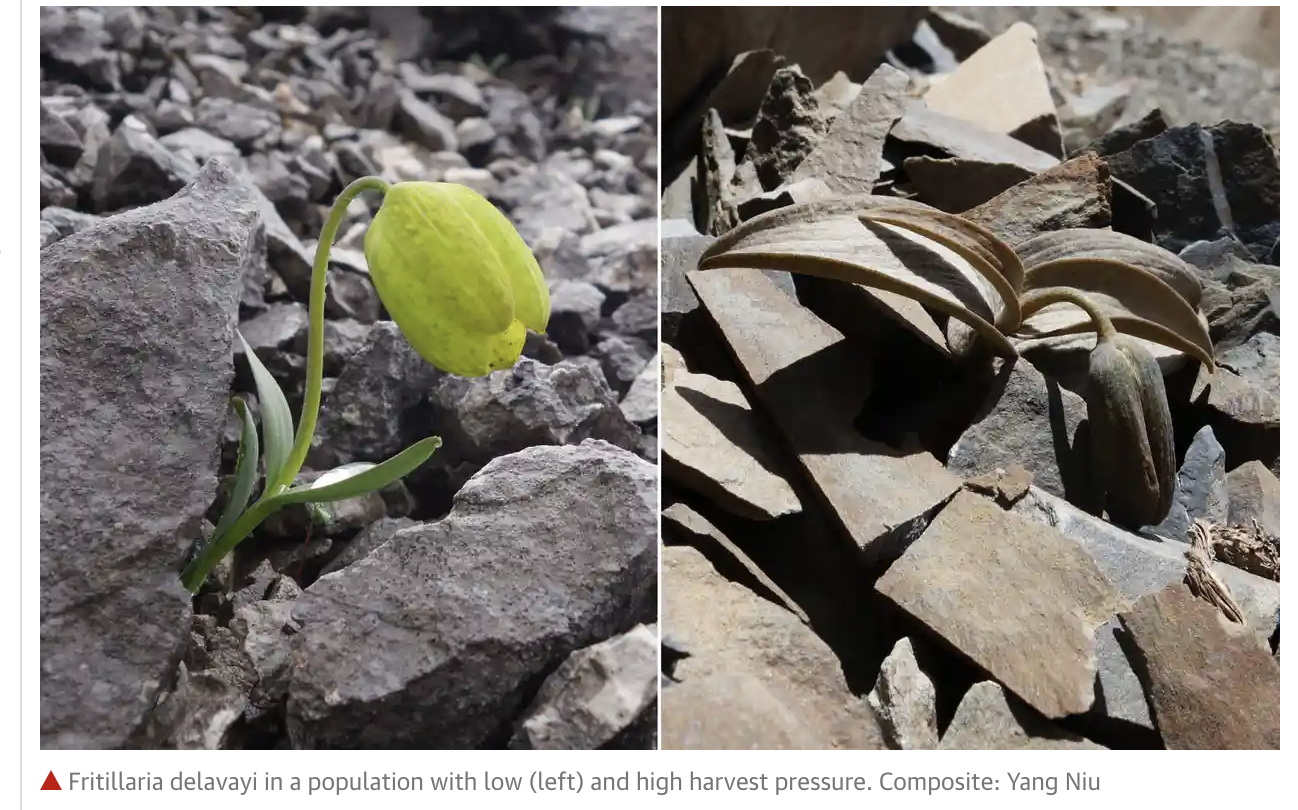 In the paper, the authors collected plants from eight populations in southwest China, and found significant divergence of color among the populations using a special “vision model” to measure the colors and luminescence seen by humans. Here’s a plot of the variation among the eight populations (each dot has a color that is related to the plant color, with each color representing a single population):

Are the plants camouflaged in their local area, and is the degree of the camouflage correlated with how heavily the plants are harvested? The authors derived a measure of how camouflaged a plant was by comparing leaf and flower color with the color of the soil or rock background (also measured using the human-vision algorithm). Collection intensity was assessed by questioning the locals and deriving an estimate of intensity = [amount of bulbs collected]/[relative abundance of the plant in the area]. The higher this fraction, the heavier the collection effort (i.e., the proportion of the population that gets taken by collectors).

As you see from the plot below, the higher the collection intensity in a population (position to the right), the better the mimicry (lower values on the Y axis). The relationship is highly statistically significant (p < 0.001). Clearly, the prediction that the color evolved in response to human harvesting is supported. 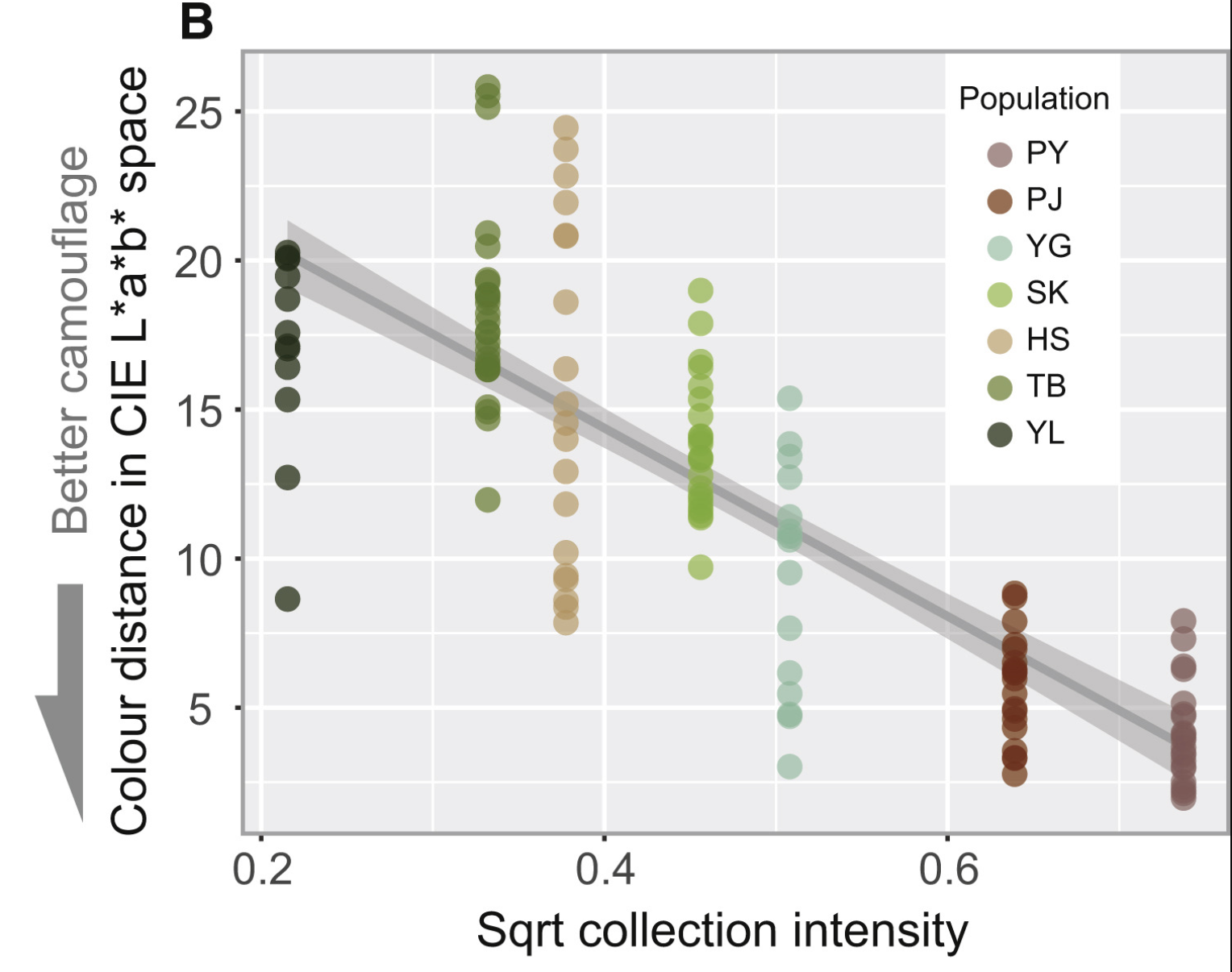 Finally, the authors looked at an ancillary relationship: that between the difficulty of digging up bulbs (some are hidden under dirt and rock piles) and the degree of camouflage of the population. The relationship they found is shown below. One predicts that the easier it is to dig up a bulb, the more camouflaged the population would be, for easier digging makes for heavier harvesting and thus stronger “unnatural selection”. The relationship below affirms the prediction, though they left out one population where collection is easy but the plant is green—yet collection isn’t heavy in this population. (This sounds like post-facto discarding of data, but could be kosher.) 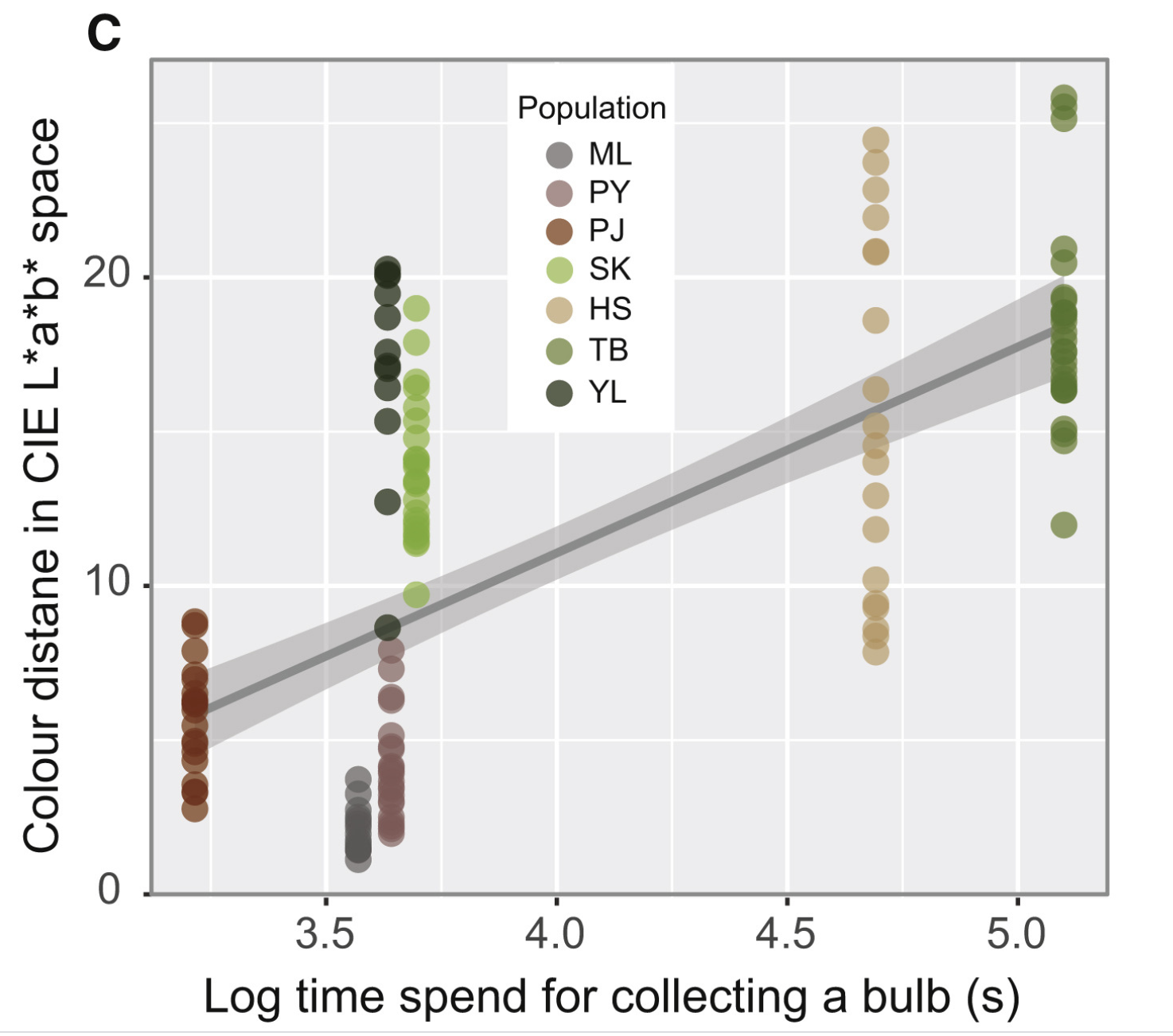 Whether each dot is statistically independent of the others, which seems to be the assumption when doing the nonparametric correlations, is dubious, since plants in a given area are related to one another, and each plant didn’t evolve its color independently—the population as a whole evolved its color as a gene pool.

Leaving that possible quibble aside, the authors finally did a computer experiment on target slides showing plants matching their background to various degrees. They found, as expected, that the locals took longer to detect a plant when it matched the background, confirming that your chance of escaping “predation” is likely higher when you’re better camouflaged.

Here’s one more photo from the paper showing the cryptic nature of the plant in brown and gray backgrounds (C and D), and how readily the bright green plants stands out against a scree background (A and B; this is clearly a low-harvest area).

There are no new principles demonstrated in this paper, but the results are still fascinating, and show a mixture of artificial and natural selection that’s called “unnatural selection.” That is, the color isn’t a deliberate product of the breeder, like the grotesquely long bodies and minuscule limbs of wiener dogs, but is an inadvertent result of “artificial” selection. (I’m not even sure I’d call this artificial selection, for humans are part of nature and are gathering something they need.) And, like natural selection, all this process requires is differential reproduction of individuals that have different genetic variants.

If you want to read more about “unnatural selection” and how it’s affected many species, click on the screenshot below.