I was going to say “the Catholic Church gives the pandemic a shot in the arm,” but that would have been confusing. Reader Bill sent me this link to the Los Angeles Times about a faith-soaked Catholic bishop (click on screenshot) who’s bad-mouthing coronavirus vaccines because they’re supposedly made using embryonic tissue from aborted fetuses or from surplus embryos used during in vitro fertilization (IVF) that are eventually discarded. 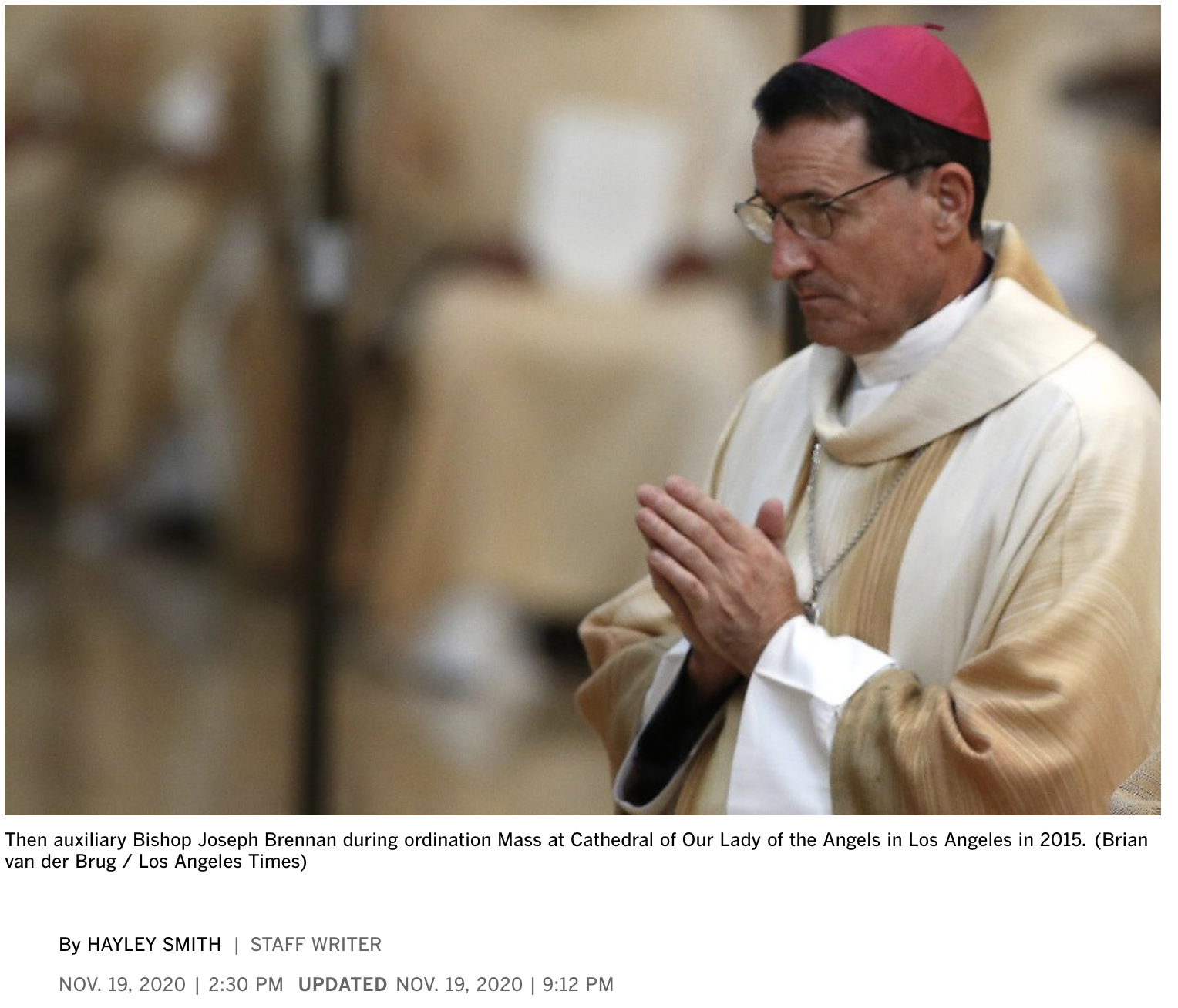 Citing ethical concerns about the use of fetal cells in vaccine development, Bishop Joseph Brennan of the Diocese of Fresno is urging Catholics not to “jump on the COVID-19 vaccine bandwagon.”

In a video shared by the diocese this week, Brennan said that some of the researchers racing to produce a coronavirus vaccine have made use of cells derived from an aborted fetus, and perhaps other “morally objectionable” materials.

“I try to maintain a joyful spirit, so I don’t like to rain on anyone’s parade,” Brennan said. “But I’m going to rain on a parade today: the vaccine parade.”

In his message, Brennan said the use of fetal cells at any stage of a vaccine’s development means Catholics cannot avail themselves of its scientific results.

“I won’t be able to take a vaccine, brothers and sisters, and I encourage you not to, if it was developed with material from stem cells that were derived from a baby that was aborted, or material that was cast off from artificial insemination of a human embryo,” he said. “That’s morally unacceptable for us.”

This is one example of the hypocrisy of Catholicism. Even if vaccines were made using fetal or embryonic tissue, that tissue would eventually be discarded. Why not use it to save lives? Further, even if you think that discarding unused IVF embryos, or aborting fetuses, is “murder,” there is no evidence that women will undergo these procedures in order to help create vaccines.  Bishop Brennan has a bizarre kind of calculus in which tissue already available cannot be used to save other lives. Note that he is in general expressing the position of the Catholic church, though I don’t think the Pope has yet weighed in on this.

But are the vaccines really made using this kind of tissue? Nope—not one mentioned by Brennan during his video homily:

He cited the Pfizer vaccine by name, which — along with another vaccine from Moderna — has been roundly celebrated as a breakthrough in the fight against the coronavirus.

Brennan did not explain why he singled out Pfizer’s COVID-19 vaccine for criticism. There is no indication that it was developed using either fetal cells or human embryonic stem cells.

“Not a single stage has had it,” Pfizer spokeswoman Jerica Pitts said Thursday.

The Pfizer and Moderna vaccine candidates are made with a snippet of the coronavirus’ genetic code, and both are estimated to be roughly 95% effective.

You think the good bishop would have done his homework, for how many Catholics that heard his homily are going to check for themselves?

It is true that some vaccines are made using fetal tissue:

The Charlotte Lozier Institute, an antiabortion organization, has flagged five COVID-19 vaccine candidates that were developed with the help of fetal cells. One of them, developed by Oxford University and AstraZeneca, is in late-stage testing. So is another developed by Johnson & Johnson.

If Catholics are worried about burning in hell if they take a vaccine developed this way, all they have to do is take the Pfizer or Moderna vaccine. But I repeat: even if you equate abortion or unused IVF embryos as “murder”, what is the moral objection to using that tissue to save further lives? It’s not as if women get IVF and abortions for the purpose of creating vaccines, or get paid to do so. Those abortions or IVF procedures would take place with or without a vaccine being developed.

All I can say is that it’s a good thing that at least some vaccines are being developed without use of fetal or embryonic material, because otherwise pious Catholics wouldn’t be able to get vaccinated, and more people would die in the name of a senseless “morality”.

52 thoughts on “Thanks to an American Catholic bishop, the pandemic gets a boost”