Doug Hayes is back with another installment of the avian theater that occurs in his backyard. Voilà: Part 9 of “The Breakfast Club”. Doug’s notes and IDs are indented:

Here’s the ninth installment of the Breakfast Crew, here in Richmond, Virginia.  The weather has been cool and rainy for the past few weeks. We had a couple of nights of near freezing temperatures. Bird activity has increased as food becomes scarcer in the wooded area surrounding the Forest Hill neighborhood.
The house sparrows (Passer domesticus) spend a lot of their time hanging out in the azalea bush in our front yard, especially if traffic at the feeders is heavy. Gradually, they head to our neighbor’s yard across the street (she has a pair of feeders that are less busy than ours). Eventually they do turn up in our yard after morning traffic dies down. 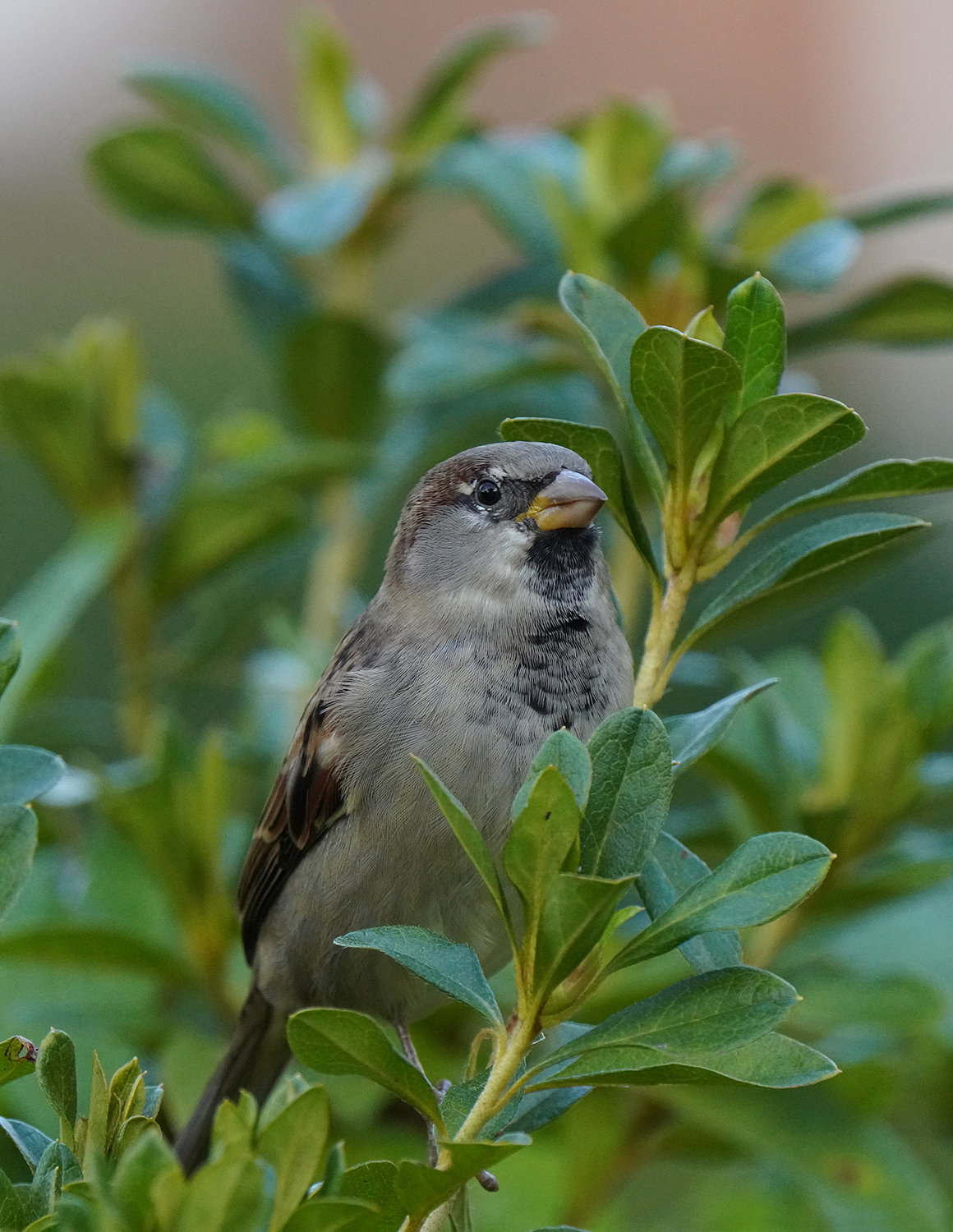 Another house sparrow (Passer domesticus) in the azalea bush. 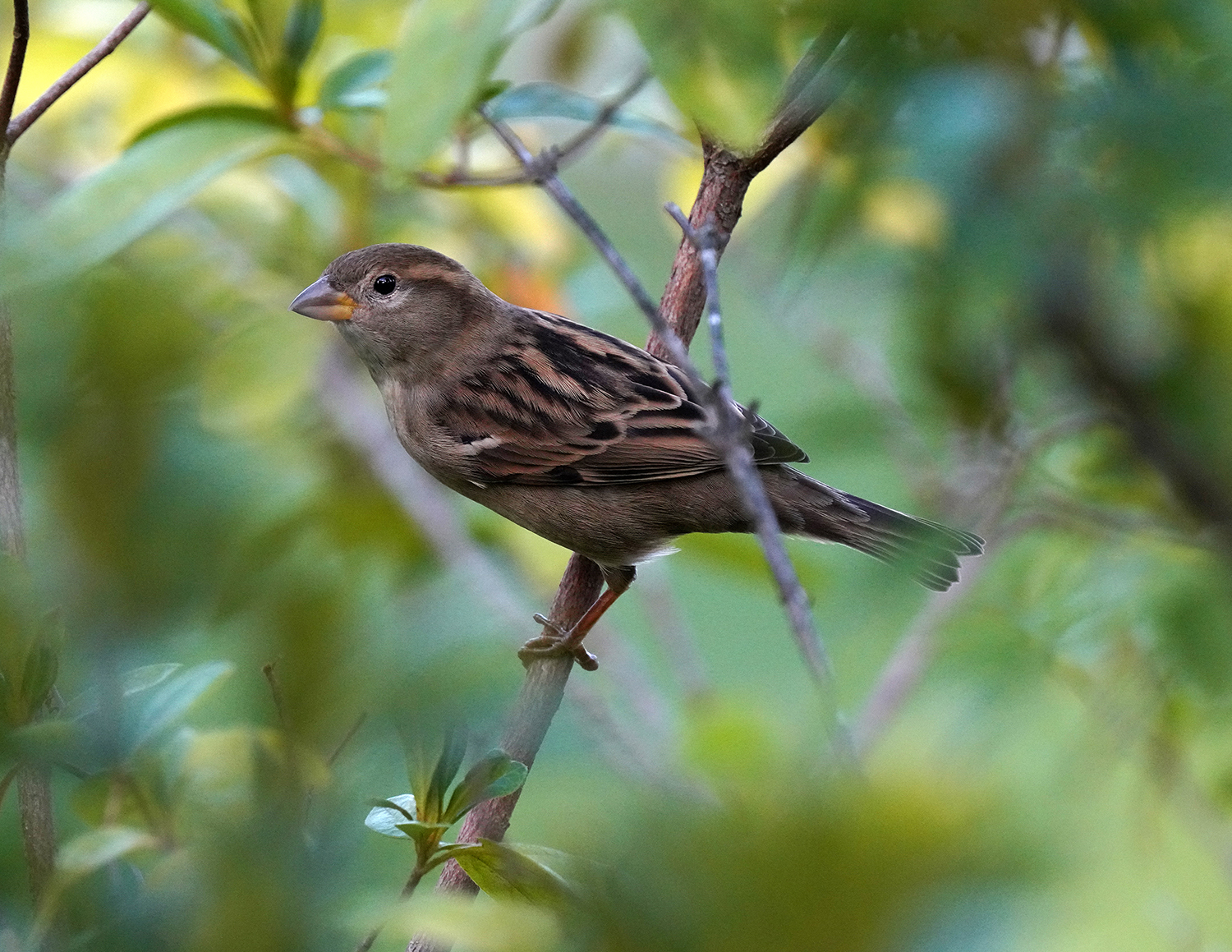 A house finch (Haemorhous mexicanus) and a white-breasted nuthatch (Sitta carolinensis) at the feeder. 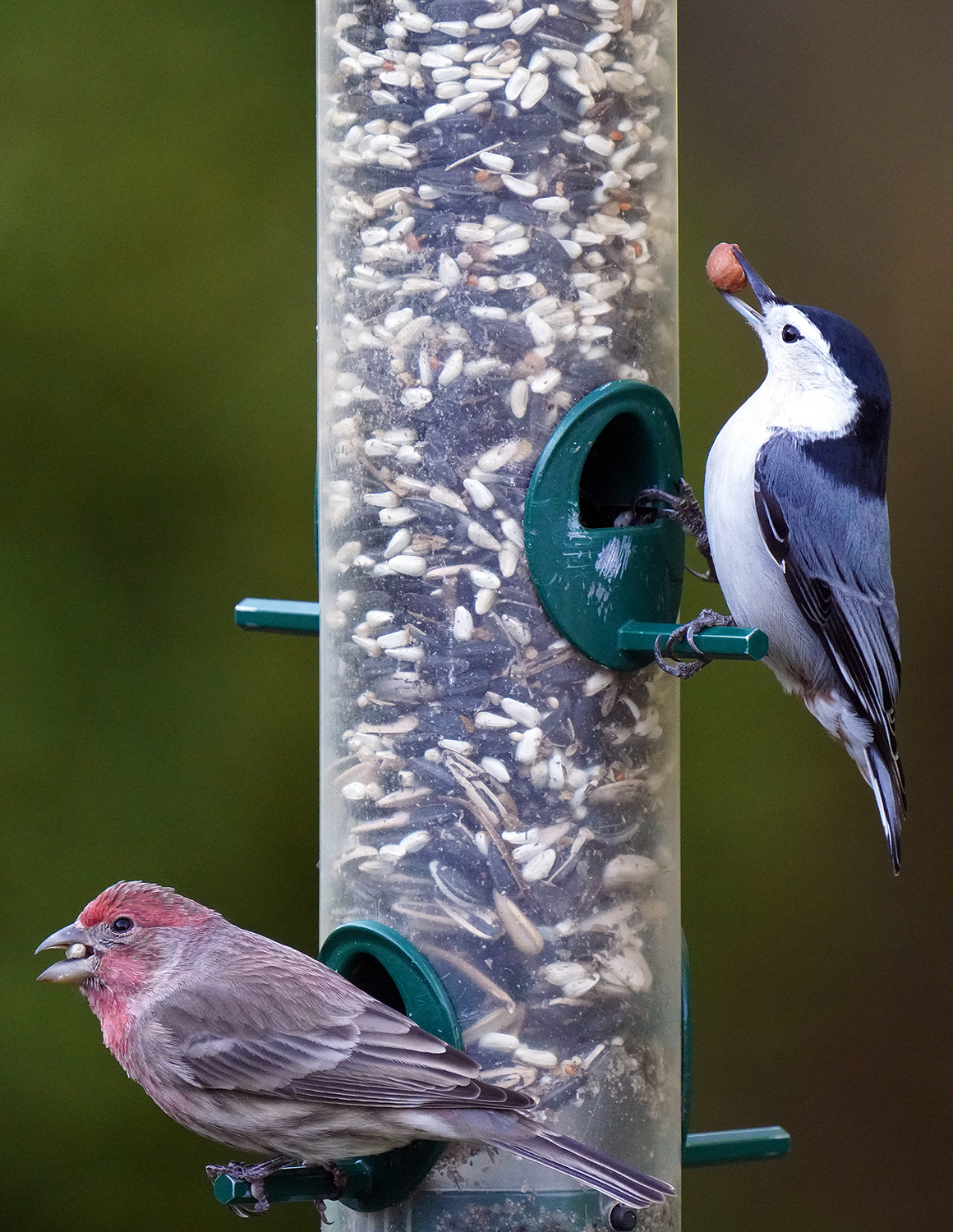 The nuthatches (Sitta carolinensis) have been showing up in greater numbers since the weather has started to cool. It is not unusual to see five or more darting around the feeders and chasing each other away from the food. 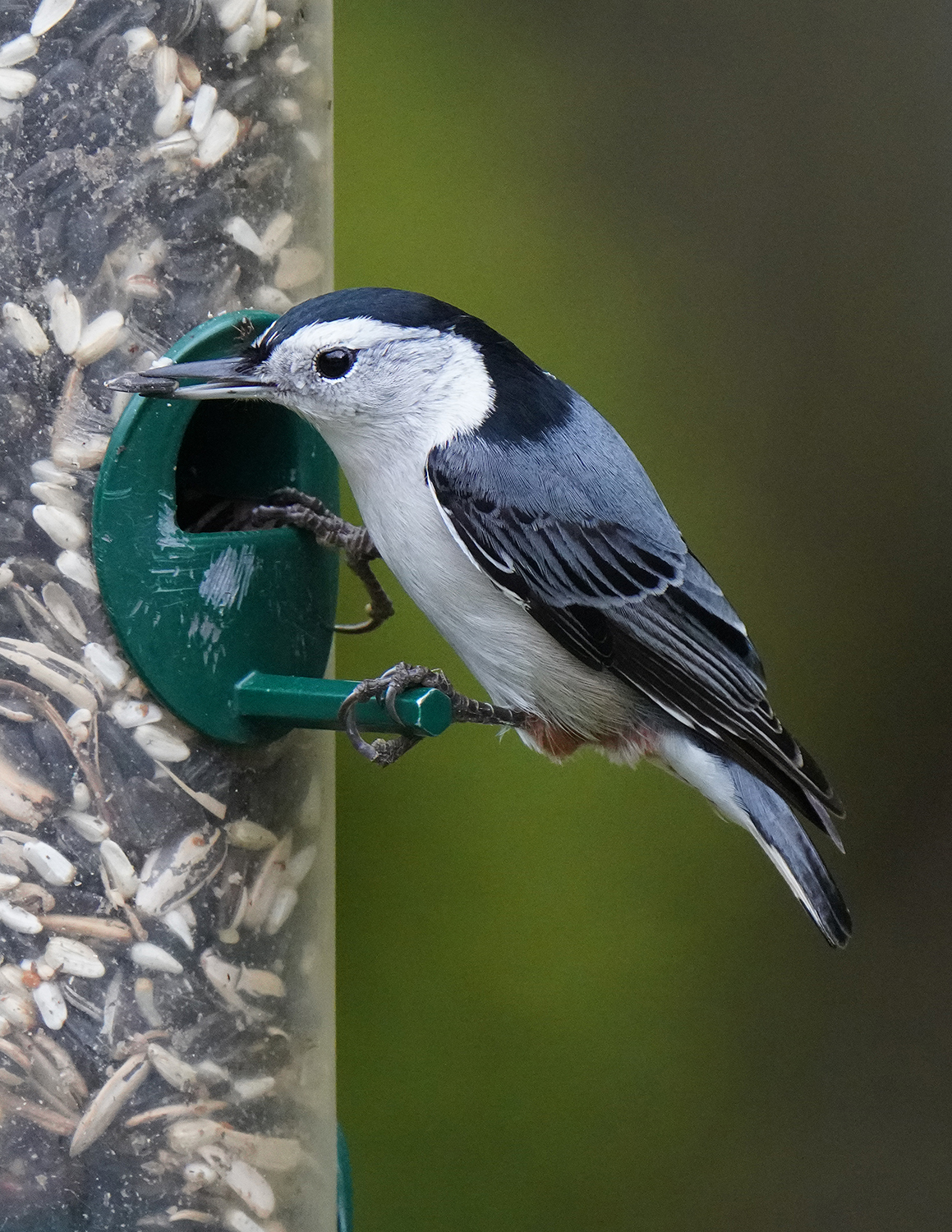 A house finch (Haemorhous mexicanus) gets a choice seed.  They use their tongue and beak to remove the husk to get at the kernel inside the seed. 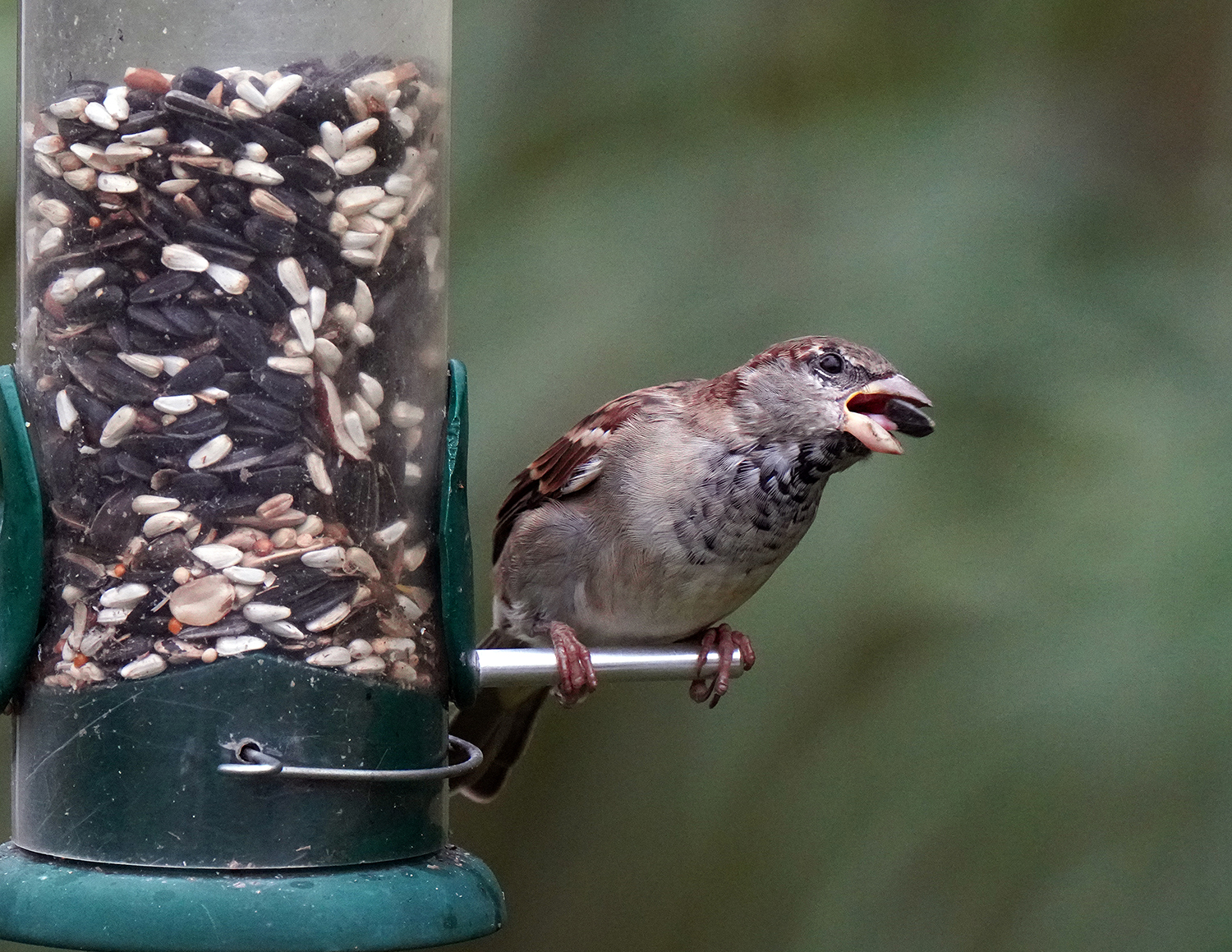 A white throated sparrow (Zonotrichia albicollis). These guys have made their appearance with the arrival of cooler weather. I haven’t seen them at the feeders—just scavenging seeds from the ground. 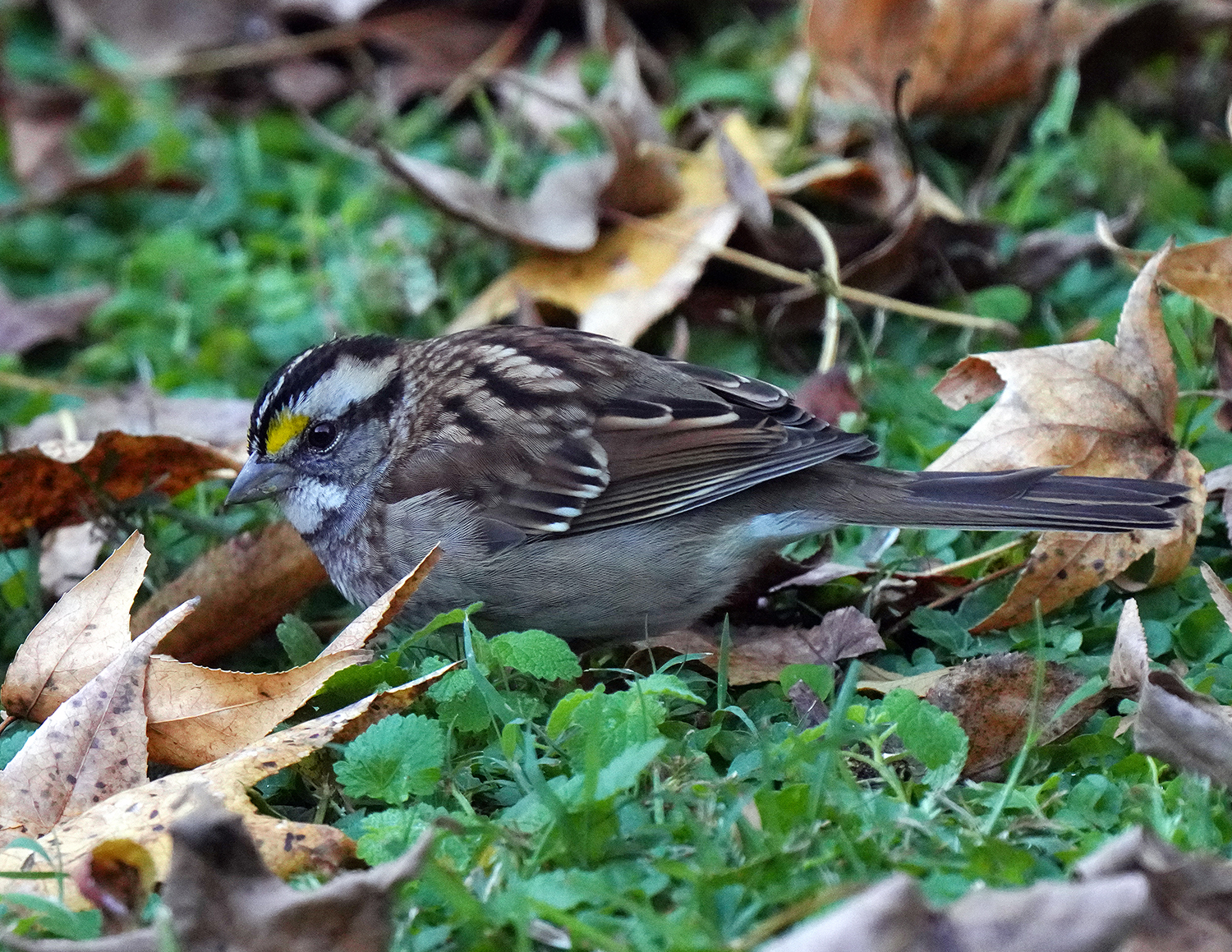 One of the northern cardinals (Cardinalis cardinalis) that hatched late in the spring. This one and her three siblings still hang out in the yard and are the only cardinals that will perch and eat from both the seed and suet feeders. All of the adult cardinals gather seeds from the ground. 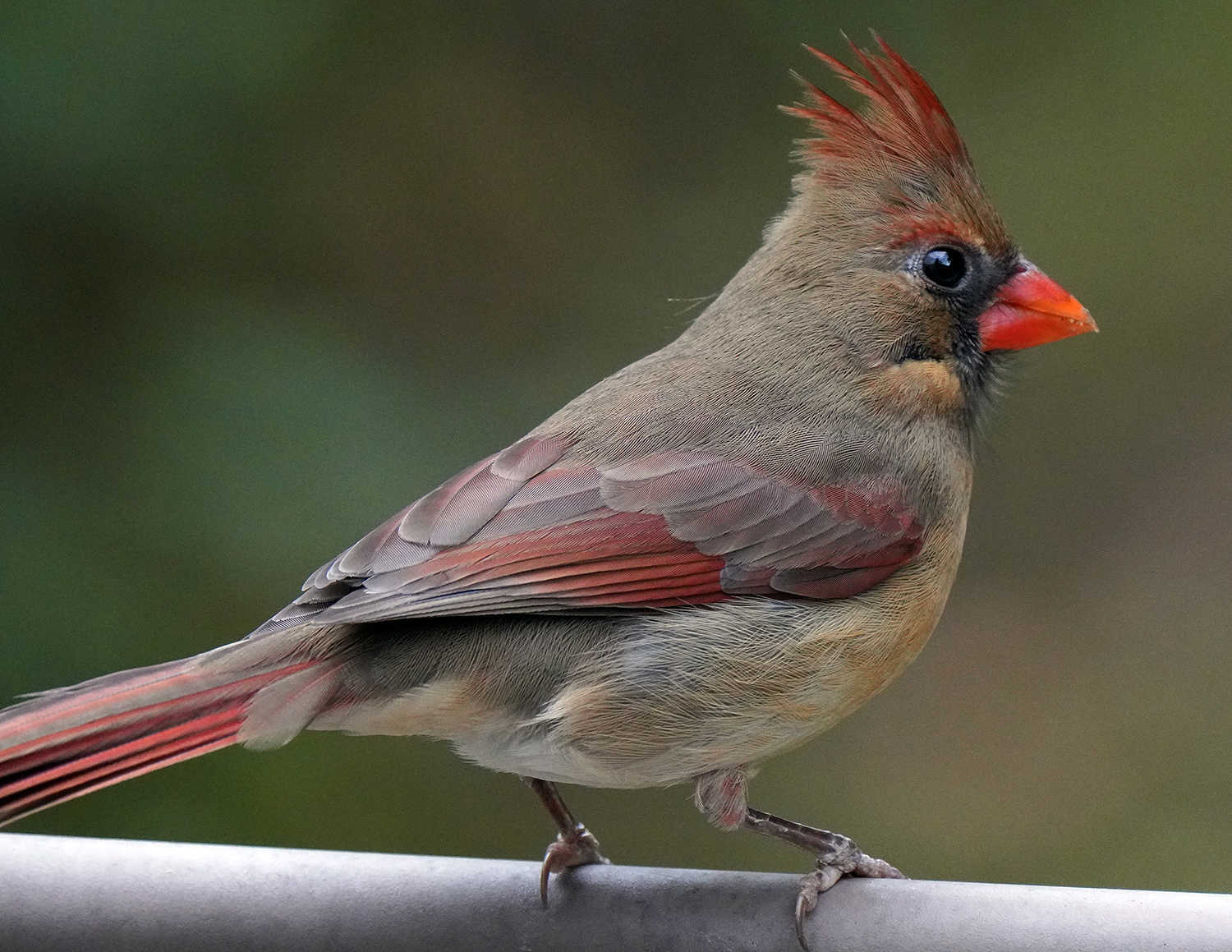 The young female cardinal (Cardinalis cardinalis) and a female red-bellied woodpecker (Melanerpes carolinus) at the feeder. 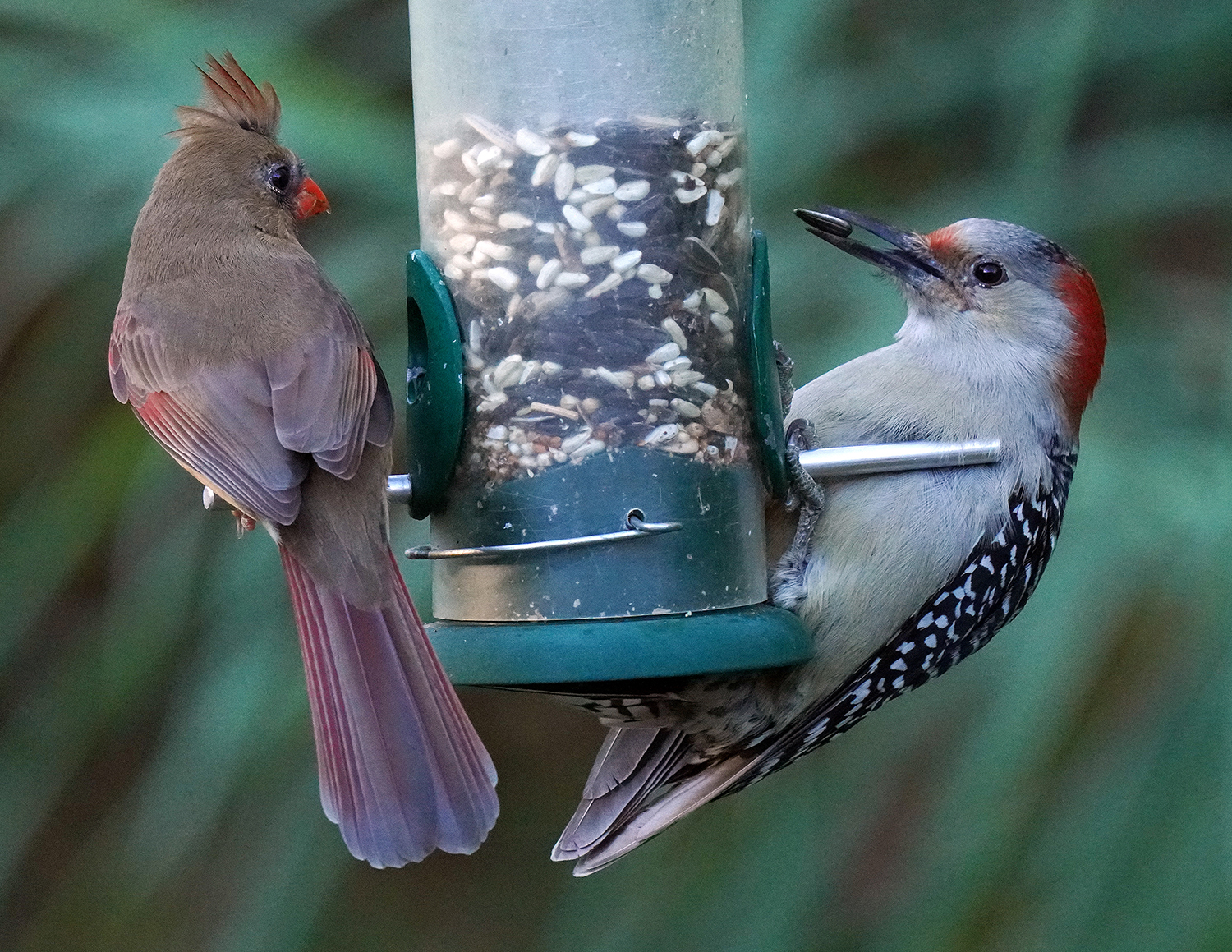 The blue jays (Cyanocitta cristata) have been out in the more wooded areas around Forest Hill for the past couple of months. As the weather has turned cooler, they are now making their way back into the neighborhood for some easy meals.  So far, they are keeping to the far side of the yard which has more trees and bushes. Occasionally, one will make its way to the feeders to grab a few seeds. 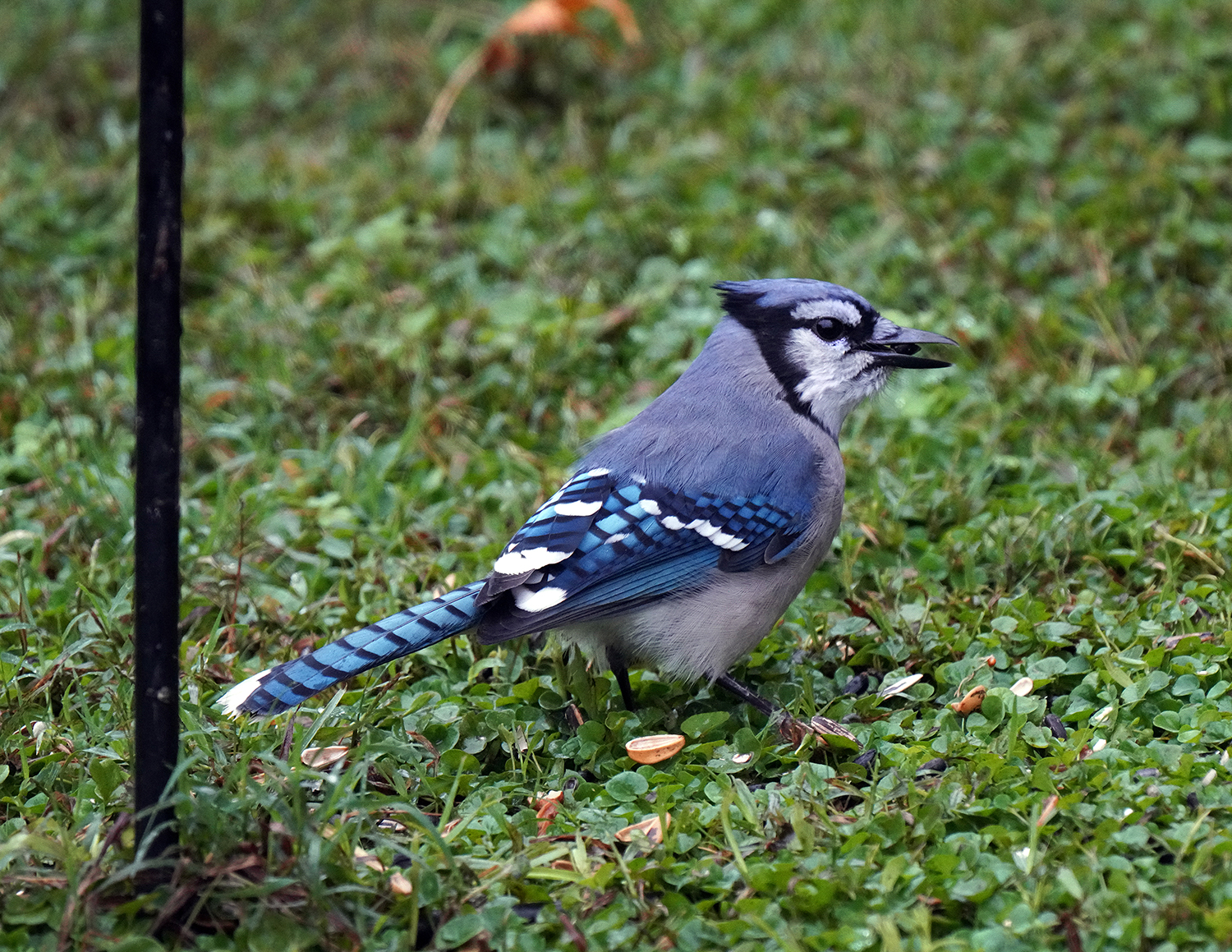 A female red-bellied woodpecker (Melanerpes carolinus). One of three regulars that hang out in the trees overlooking the backyard. 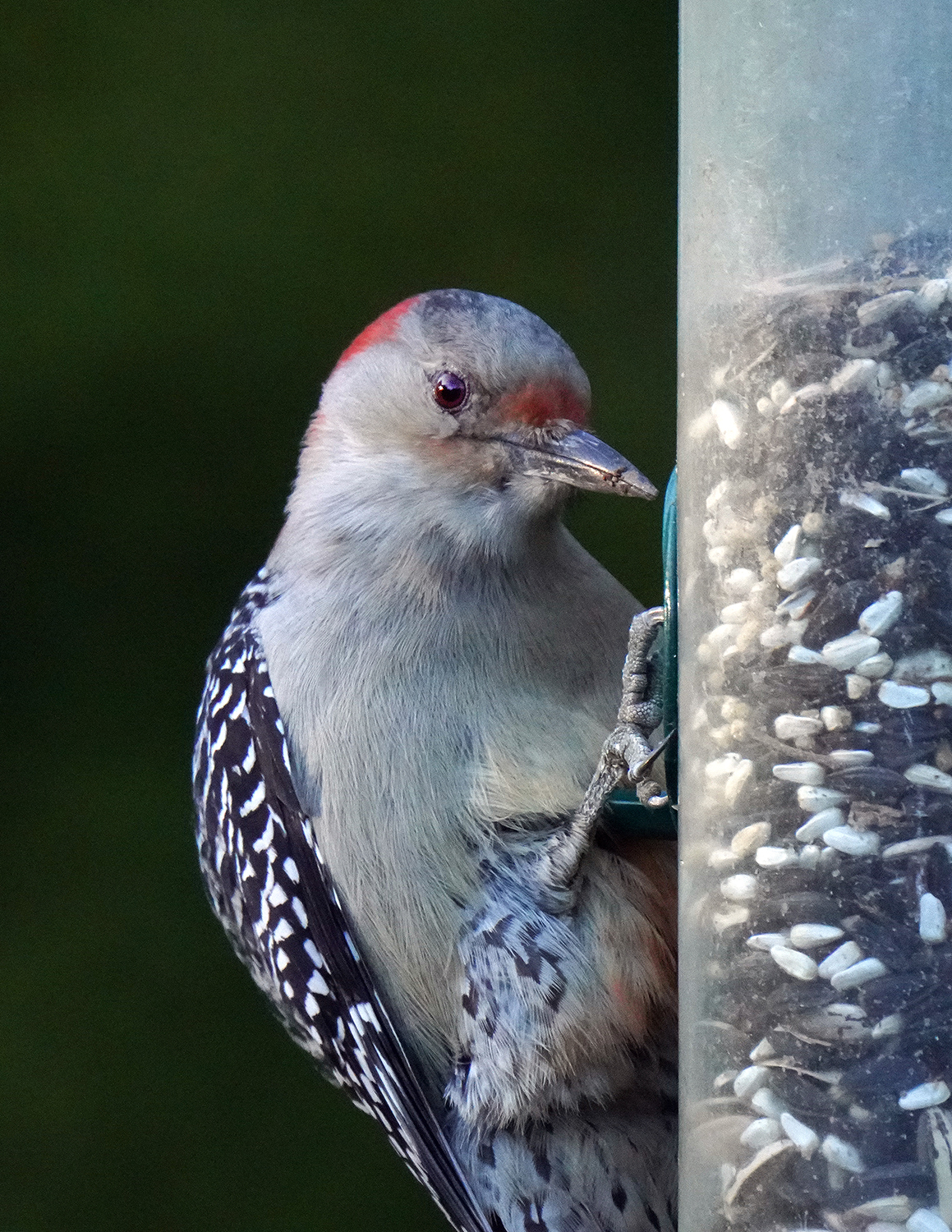 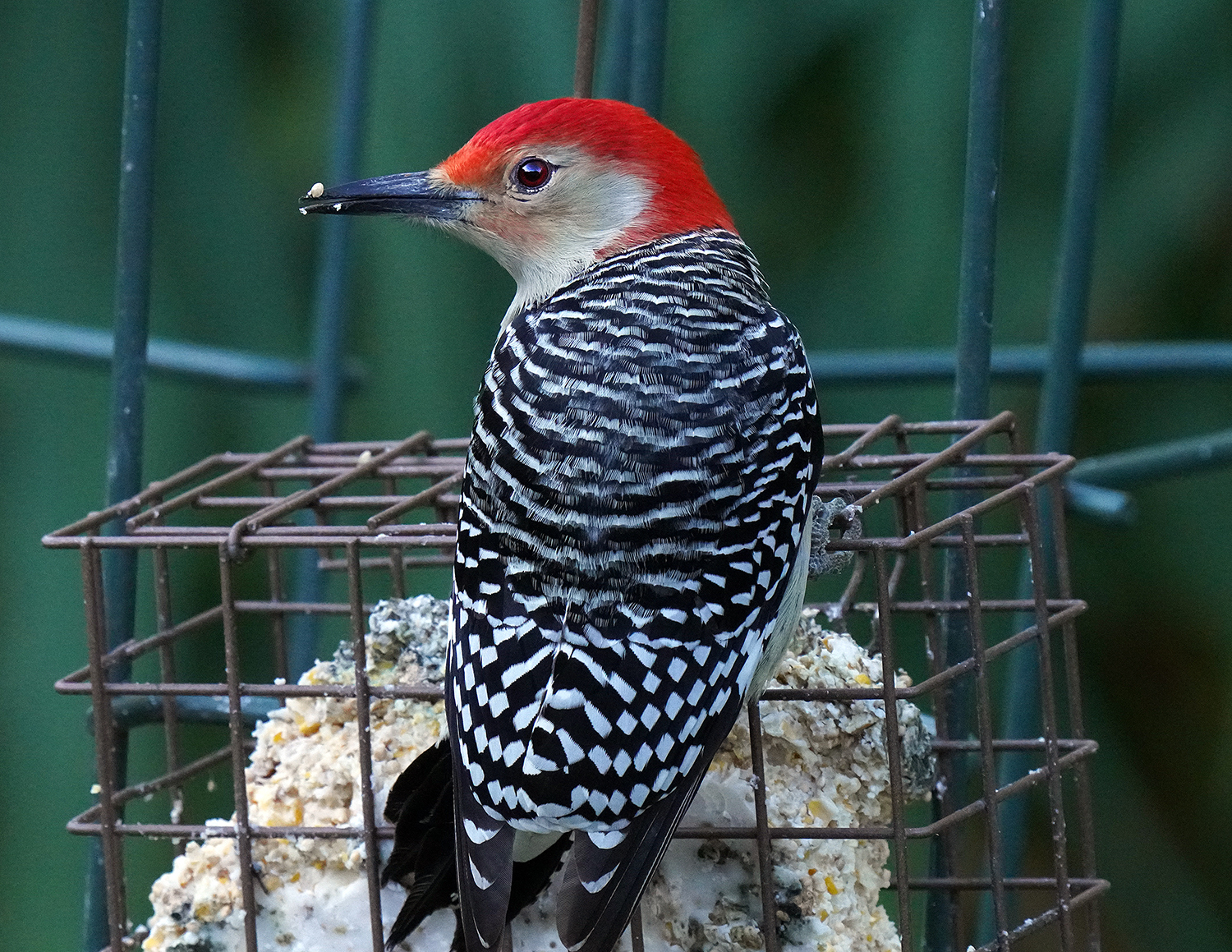 A house finch (Haemorhous mexicanus). These birds are the most numerous in the yard. The tend to sit at the feeders for extended periods, cracking seeds and just hanging out until driven away by other birds that want to eat. 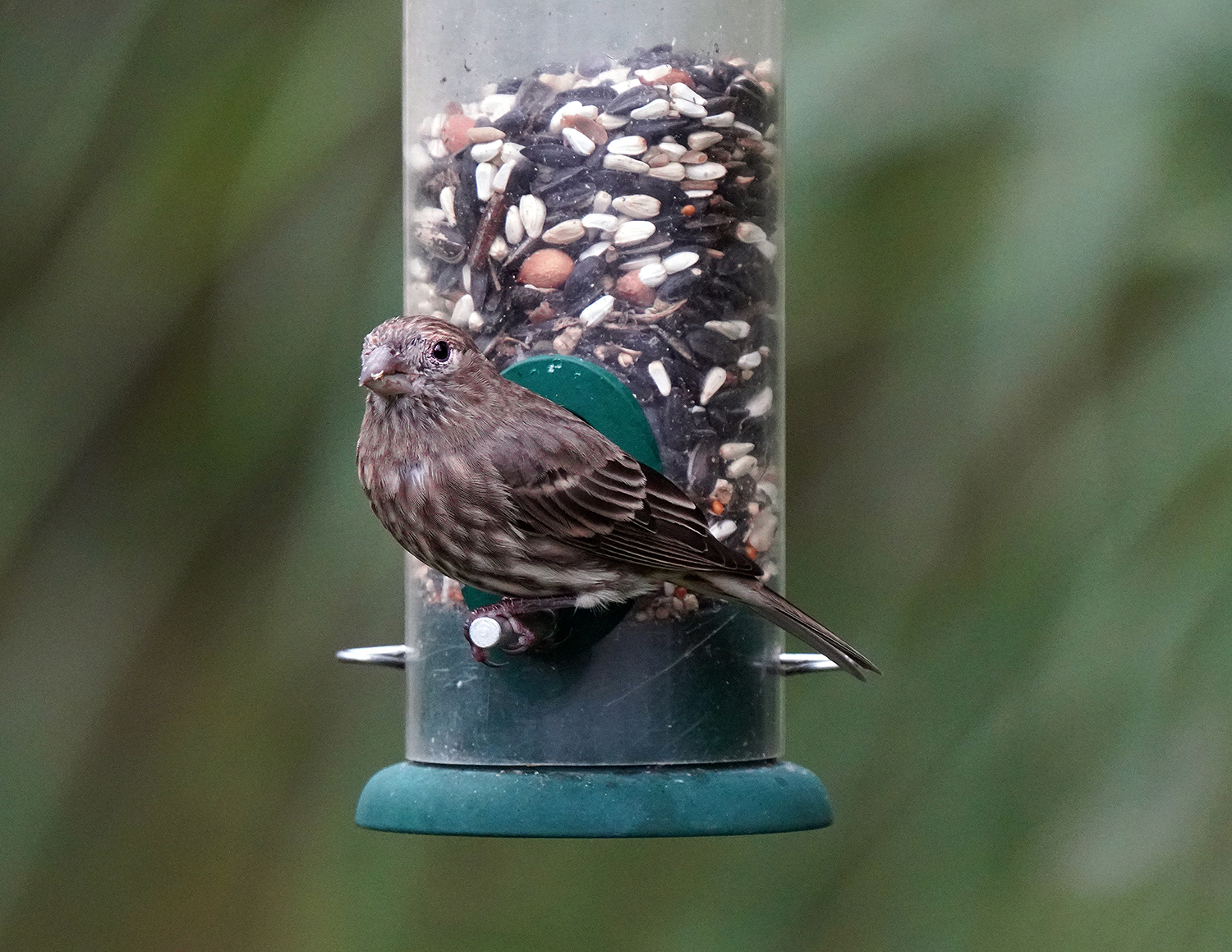 I decided to go down to the lake for the first time in over a month. The great blue heron (Ardea herodias) is still there, looking remarkably like Big Bird. The last time I saw the heron, it had molted and was looking quite scruffy. Its feathers are coming back in quite nicely. 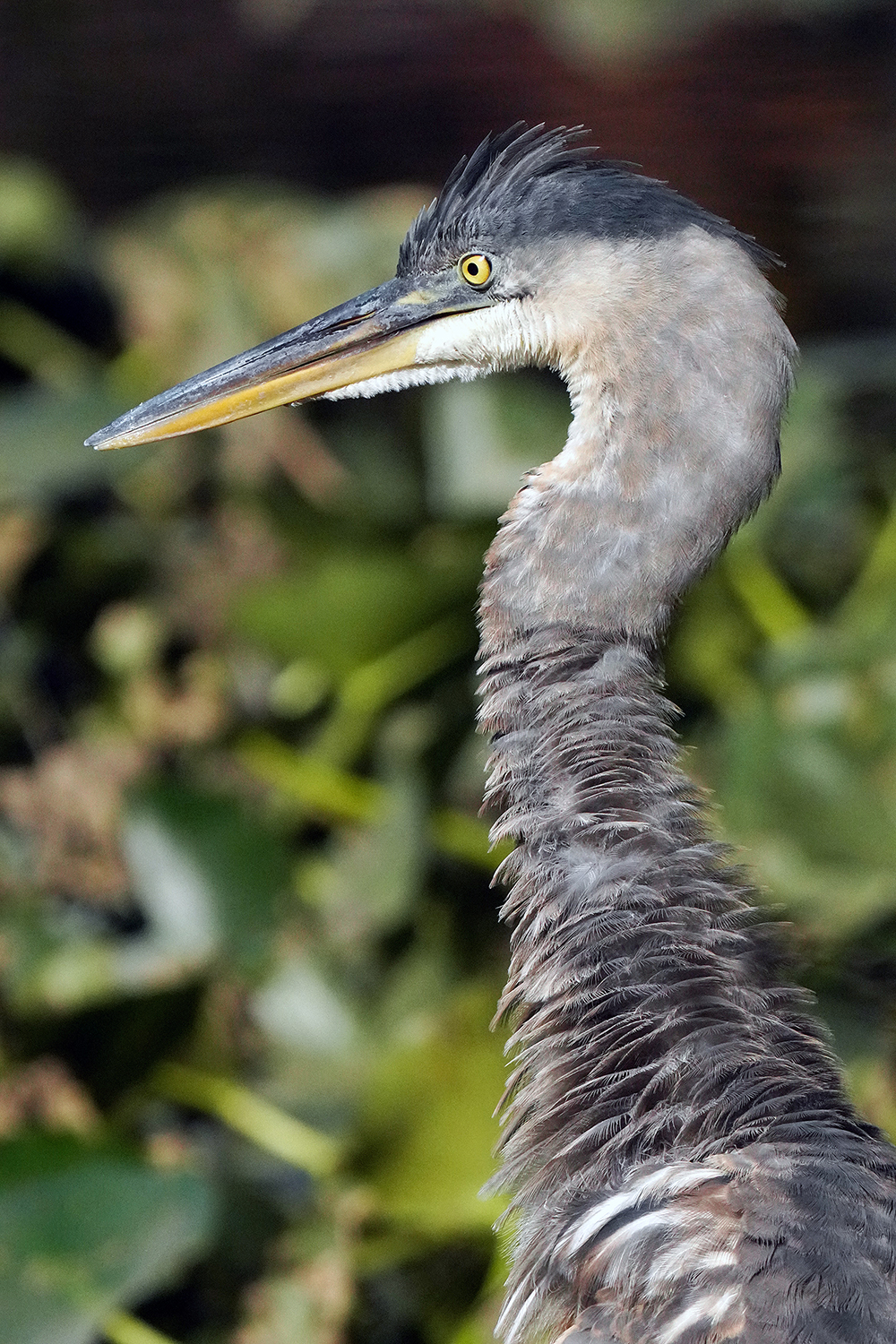 This is a new eastern chipmunk (Tamias striatus) who has been visiting the yard for the past week.  This guy is bigger than the other three regulars and has a scar on its face. I have seen chipmunks fighting and I have seen squirrels attack them while scavenging seeds. Not exactly a peaceful, Disney-type lifestyle. BTW, I clean up the spilled seeds and husks with a shop vac a couple of times a week to avoid mold and having some of them sprout. 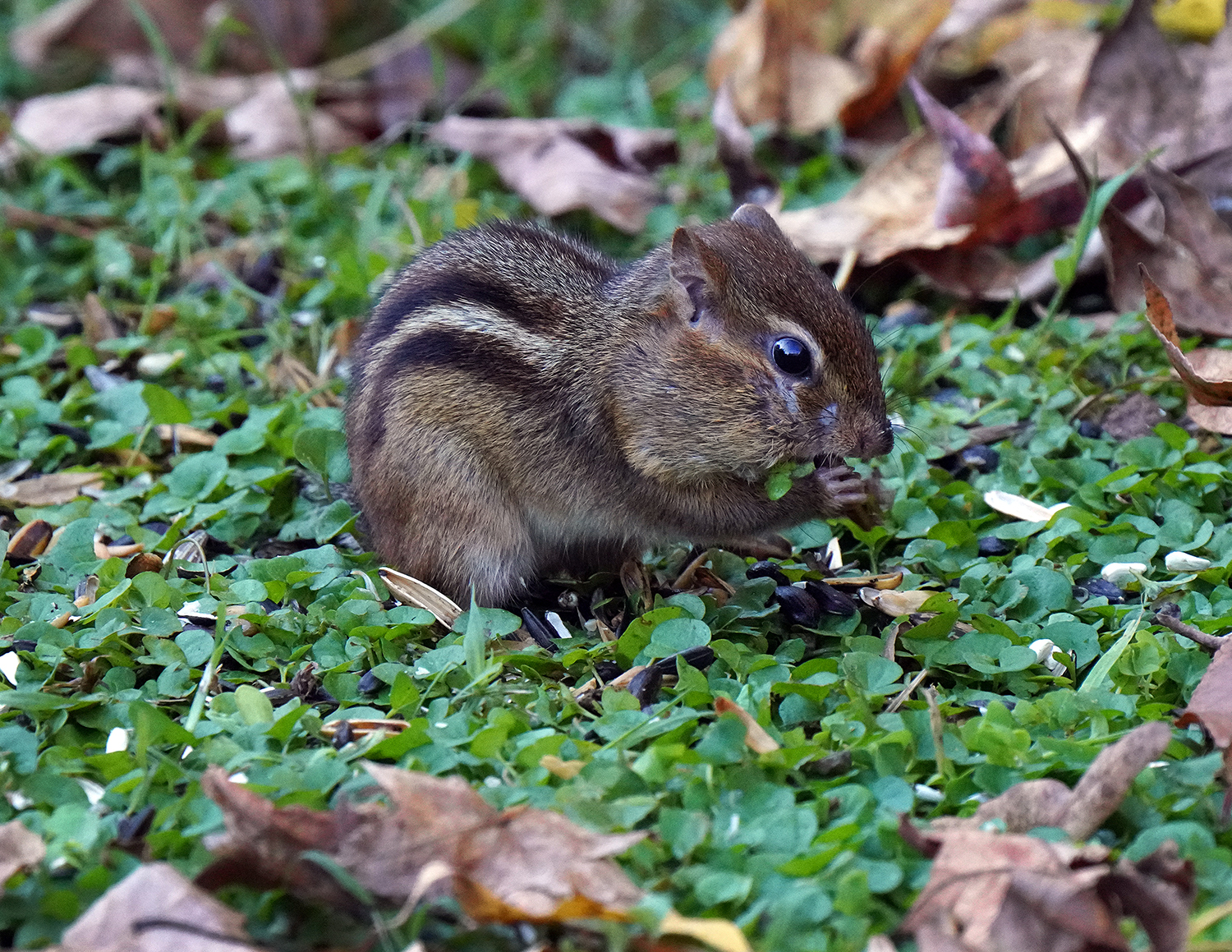 This shot was taken just a few seconds after the photo of the chipmunk. This eastern gray squirrel (Sciurus carolinensis) came out of nowhere and jumped on the chipmunk, driving it away from the seeds birds have scattered on the ground. 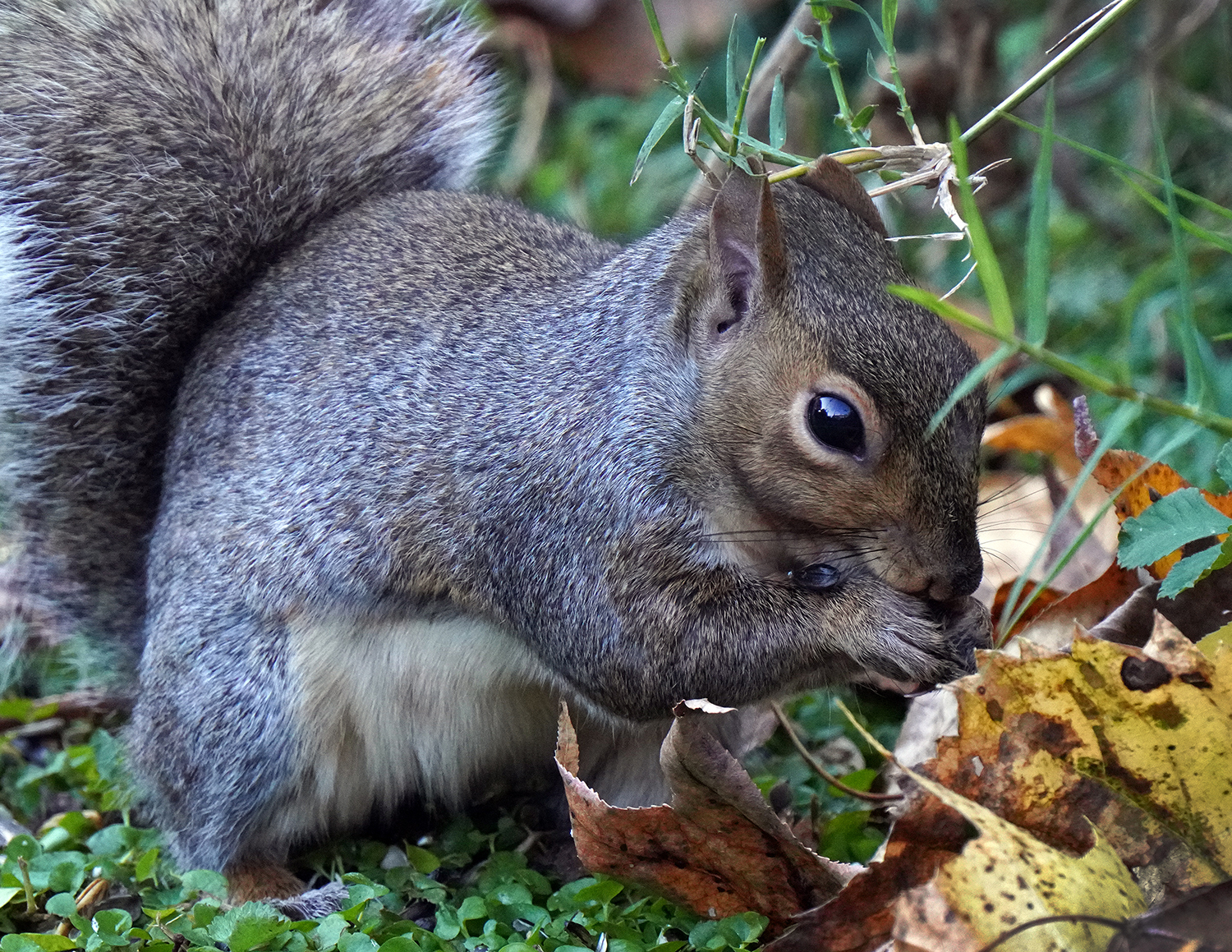