You may not be eager to listen to advice from a conservative about how the Left is tearing itself apart, but all Stephens is saying in his latest NYT column (click on screenshot) is what I’ve been saying for a while: it’s not going to help the Left further its agenda if it keeps engaging in internecine struggles between the “progressives” and the centrists. Since Americans have just proven themselves more willing to support the centrist program, you can’t argue that the centrists should step aside for people like Bernie Sanders or “the squad”. (I hasten to add that some of their ideas are good ones, like universal healthcare and parts of the Green New Deal, but their program as a whole won’t help the center hold. Nor will demonizing everyone who voted for Trump.)

Ergo, I suggest that the best tactic is not only to adopt a less-extreme Democratic agenda, but also (and this may be futile) try compromising more with right-centrists (compromise with most Republicans, though, is hopeless). I’ll let you read Stephens’s op-ed yourself, and then I’ll give a few quote, and let you hash it out while I’m getting drilled: 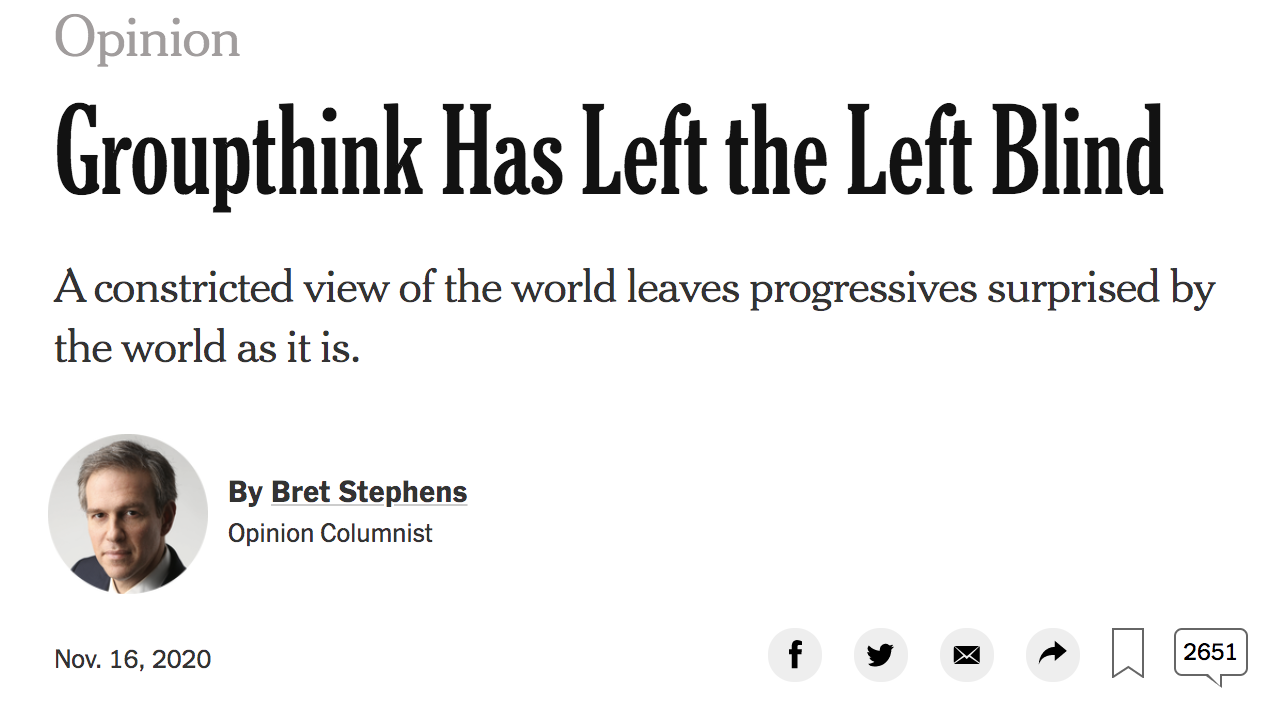 What, today, is leftism, at least when it comes to intellectual life? Not what it used to be. Once it was predominantly liberal, albeit with radical fringes. Now it is predominantly progressive, or woke, with centrist liberals in dissent. Once it was irreverent. Now it is pious. Once it believed that truth was best discovered by engaging opposing points of view. Now it believes that truth can be established by eliminating them. Once it cared about process. Now it is obsessed with outcomes. Once it understood, with Walt Whitman, that we contain multitudes. Now it is into dualities: We are privileged or powerless, white or of color, racist or anti-racist, oppressor or oppressed.

The list goes on. But the central difference is this: The old liberal left paid attention to complexity, ambiguity, the gray areas. A sense of complexity induced a measure of doubt, including self-doubt. The new left typically seeks to reduce things to elements such as race, class and gender, in ways that erase ambiguity and doubt. The new left is a factory of certitudes.

And what? A conservative shows some humor?:

For the new left — and the publications that champion it — the loss is much greater. It makes them predictable, smug and dull. It alienates readers. A current article on the New York magazine website is titled, “I Think About Björk’s Creativity Animal a Lot.” For gems such as this they got rid of Sullivan?

But I think Stephens has a point, not just about Björk, but about the Left in general. The polarization that’s occurred, largely at the instigation of the take-no-prisoners “progressives”, has made liberal political progress harder. If you’re white but not a racist (yes, they exist, contra Robin DiAngelo), being called a racist or someone filled with unconscious bias makes you take a harder stand on “anti-racism”. Similarly, damning all who voted for Trump as “racists” and “deplorables” is a losing strategy, particularly given the large numbers of women, blacks, and Hispanics who voted for Trump this time around. This is why Biden keeps harping on his desire for compromise and comity, and emphasizing that, Republicans or Democrats, we’re all Americans.

Perhaps this is pie in the sky. But it’s worth a try. Stephens:

The apparent inability of many on the left to entertain the thought that decent human beings might have voted for Trump for sensible reasons — to take one example, the unemployment rate reached record lows before the pandemic hit — amounts to an epic failure to see their fellow Americans with understanding, much less with empathy. It repels the 73 million Trump voters who cannot see anything of themselves in media caricatures of them as fragile, bigoted, greedy and somewhat stupid white people.

It also motivates them. The surest way to fuel the politics of resentment — the politics that gave us the Tea Party, Brexit and Trump, and will continue to furnish more of the same — is to give people something to resent. Jeering moral condescension from entitled elites is among the things most people tend to resent.

Which brings me back to the flight of the contrarians. As the left (and the institutions that represent it) increasingly becomes an intellectual monoculture, it will do more than just drive away talent, as well as significant parts of its audience. It will become more self-certain, more obnoxious to those who don’t share its assumptions, more blinkered and more frequently wrong.

To the enemies of the left, the self-harm that left-leaning institutions do with their increasingly frequent excommunications is, ultimately, good news. The mystery is why liberals would do it to themselves.

Of course the Right is far from immune to this kind of intranecine fighting (remember the “Lincoln Project’?), and they engage in their own form of demonizing their opponents. But we can be better than our opponents.