This law sounds good in principle, but seems impossible to use as a way of detecting racism in potential hires. The law and its problems are described in a long and poorly-written article in the Washington Post; I’ll have more to say about the writing later. 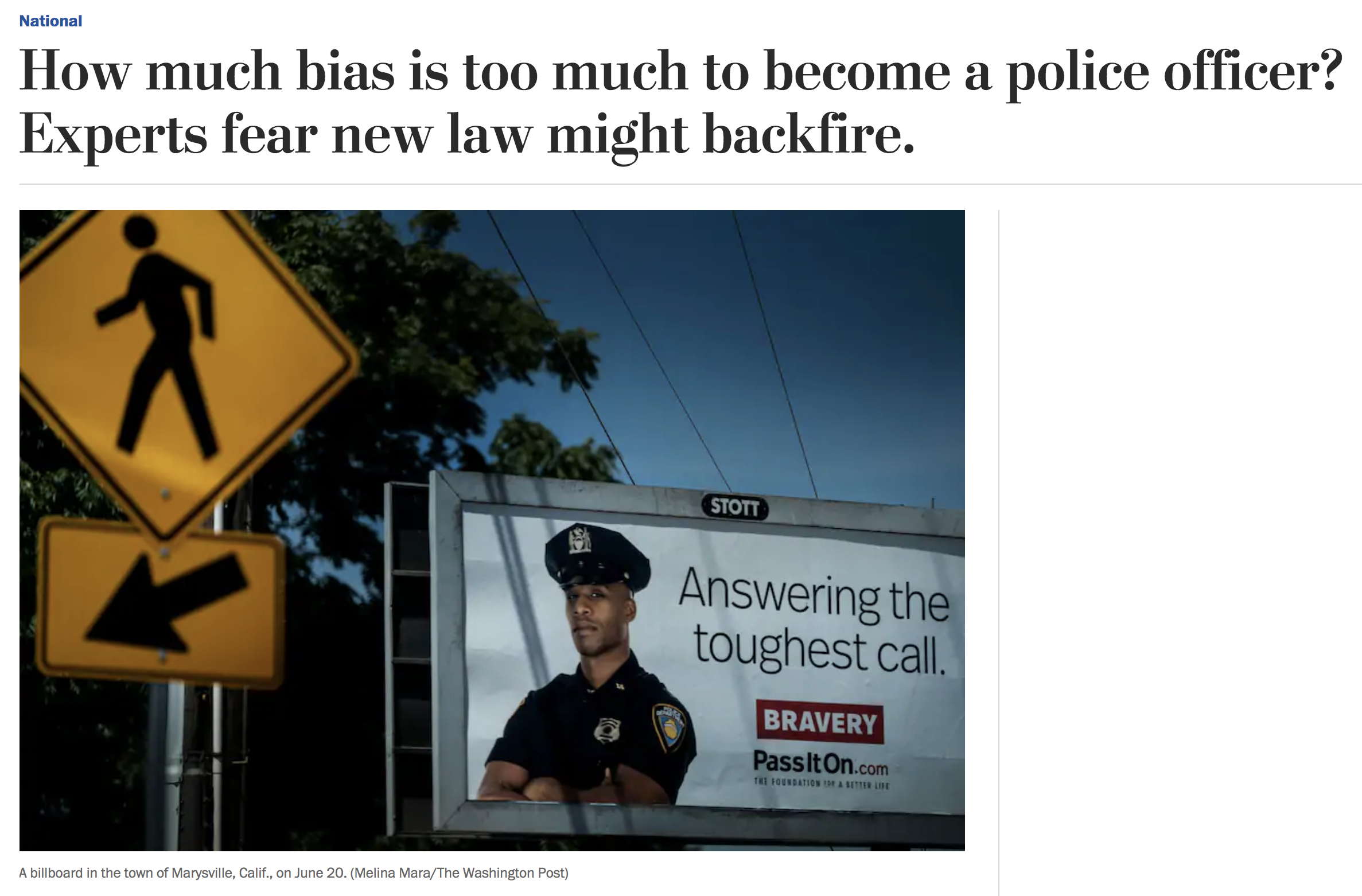 Here’s the skinny, and I’ve condensed an article whose published version is at least three times longer than it need be:

An ambitious new law in California taking aim at potential biases of prospective officers has raised questions and concerns among police officers and experts who fear that if implemented inadequately, the law could undermine its own mission to change policing and the culture of law enforcement.

The law, which was signed by Gov. Gavin Newsom (D) on Sept. 30, will expand the present screening requirements by mandating all law enforcement agencies conduct mental evaluations of peace officer candidates to identify both implicit and explicit biases against race, ethnicity, gender, religion and sexual orientation to exclude unfit recruits.

Experts, police unions and lawmakers agree on the value of identifying whether those who aspire to become officers carry considerable degrees of biases, yet it is the lack of clarity on what tools and measures will be used to look for implicit biases that is raising concerns and prompting questions.

“If police departments start to reject applicants because they have implicit biases there will be no one left to hire,” said Lorie Fridell, professor of criminology at the University of South Florida and founder of the Fair and Impartial Policing program, one of the most popular implicit-bias awareness trainings in the country.

That’s one problem with the implicit bias test: it shows that nearly everyone has implicit bias (the article mentions that 88% of whites and 48% of blacks have an implicit bias for white people (when I took the test, it showed I was “race neutral”: the optimal outcome). Not only that, but the IAT (Implicit Association Test) has been widely criticized on many grounds, not the least that it doesn’t seem to translate into measurable behavior, which is the reason you measure it. You can see The Replicability Index‘s useful summary of all the analyses by clicking on the screenshot below:

From the article’s conclusions:

An unbiased assessment of the evidence shows no compelling evidence that the race IAT is a valid measure of implicit racial bias; and without a valid measure of implicit racial bias it is impossible to make scientific statements about implicit racial bias. I think the general public deserves to know this. Unfortunately, there is no need for scientific evidence that prejudice and discrimination still exists. Ideally, psychologists will spend more effort in developing valid measures of racism that can provide trustworthy information about variation across individuals, geographic regions, groups, and time. Many people believe that psychologists are already doing it, but this review of the literature shows that this is not the case. It is high time to actually do what the general public expects from us.

(See also this article from the British Psychological Society’s “Research Digest.”) Based on the widespread criticism of these tests, it’s simply not valid to claim that everyone has implicit bias.

Now perhaps explicit bias is easier to assess, but it is of course subject to manipulation.  If you want to be a police officer, and know you’re being tested for explicit bias as the law stipulates, then you can pretty easily make yourself look non-racist even if you are.  Of course police should (and hopefully do) perform background checks, looking at your record in previous jobs, doing mental health screening and so on, but if your record is clean, and you’re an out-and-out bigot, you might not be detected. I also think that the IAT, which pronounced me “not a racist”, can probably be gamed as well (I did answer honestly, or so I think!), but that test is pretty much worthless. California is in for a long and frustrating period of hiring.
Now onto the writing quality of the article. It’s long, tedious, and the prose is convoluted and abysmal. There are also some errors. I’ll give a few examples:

The law comes amid a moment of social upheaval where police departments across the country are facing scrutiny. . . .

None of the experts interviewed by The Washington Post claimed to know of law enforcement agencies that screen for unconscious biases — those that people are unwilling or unable to identify — as a hiring standard.

. . . . he is skeptical of taking implicit bias evaluations like IATs, as benchmarks of deep-seeded beliefs that would lead to discrimination.

IT IS NOT “DEEP-SEEDED” but “DEEP-SEATED”. Everybody should know this, but the mistake is common. But that doesn’t excuse it from appearing in a major newspaper.

These screenings vary agency to agency and often include review of social media postings for sexist or racist comments, interviews with acquaintances, past employers, family members and thorough mental evaluations.

A shared concern among scholars is on the use of tools such as implicit association tests (IATs) — sometimes used in bias training — as a hiring tool or screening device due to the unreliability of its findings.

The bit after the second hyphen is confusing and hard to read. It would be easy to fix: “Because implicit association tests (IATs) have been found to be unreliable, scholars are concerned about their use to screen or hire applicants, or in bias training.” Further, the construction “a shared concern . . .on” is awkward and should be “Many scholars are concerned about. . . ” or some other construction.

Yes, these errors may seem minor, but don’t newspapers like the Washington Post employ line editors any more? What’s just as bad, or worse, is the painfully awkward prose, with long sentences, that pervades the entire article. Like this:

Kang said implicit bias tests provide useful, yet inexact information, which he compared to weather forecasts, about a person’s beliefs and stereotypes at a certain moment, but they ought to be used as road maps to help law enforcement agencies develop better methods and procedures, rather than as individual hiring tools.

UG-LEE! But examples are easy to find. One more and I’ll leave you:

Catafi said POST will be working with psychologists and law enforcement experts to incorporate these new required items to the current psychological screening manual, and they have until January 2022 to complete the process.

That one has a bad error as well: it’s incorporate INTO, not “incorporate to”.

But where are the editors? There ought to be editors. Well, maybe next year.

23 thoughts on “California passes law to test prospective cops for both explicit and implicit bias: a poorly written article in The Washington Post”