I’ve read only two issues of my six-month subscription to The New Yorker, and I’m already inclined to cancel it.  It’s not just that it’s woke, which it is—big time—but that it’s boring.  And the writing style of many (but not all) of the authors fits into a mold that I’ve beefed about before.  I refer to overwriting—a house style that distracts the reader from the topic.

In one of the most famous (and funniest) nasty book reviews I know of, H. L. Mencken’s review of Thorstein Veblen’s The Theory of the Leisure Class, Mencken indicts Professor Veblen for purveying “a cent’s worth of information wrapped in a bale of polysyllables.” The issue with the New Yorker is related, but not identical. In their case, many authors take a cent’s worth of information and gussy it up with what the authors (and presumably the editors) consider lavish and stylish prose.  But it’s tiresome to see the authors show off this way, interposing what they see as their own cleverness between the subject and the reader.

Before last night’s debate, I opened the latest issue (I try to read nearly every article) and turned to the next piece in my sequence: a review of a book about Dolly Parton. “Great!”, I thought. “I want to find out what Dolly is all about.” Sadly, although there is information on Dolly, I knew much of it before, and what I found out about was contributing writer Lauren Michele Jackson‘s desire to flaunt her cleverness in prose.

I’m not sure if the article is free, but try clicking on the screenshot. 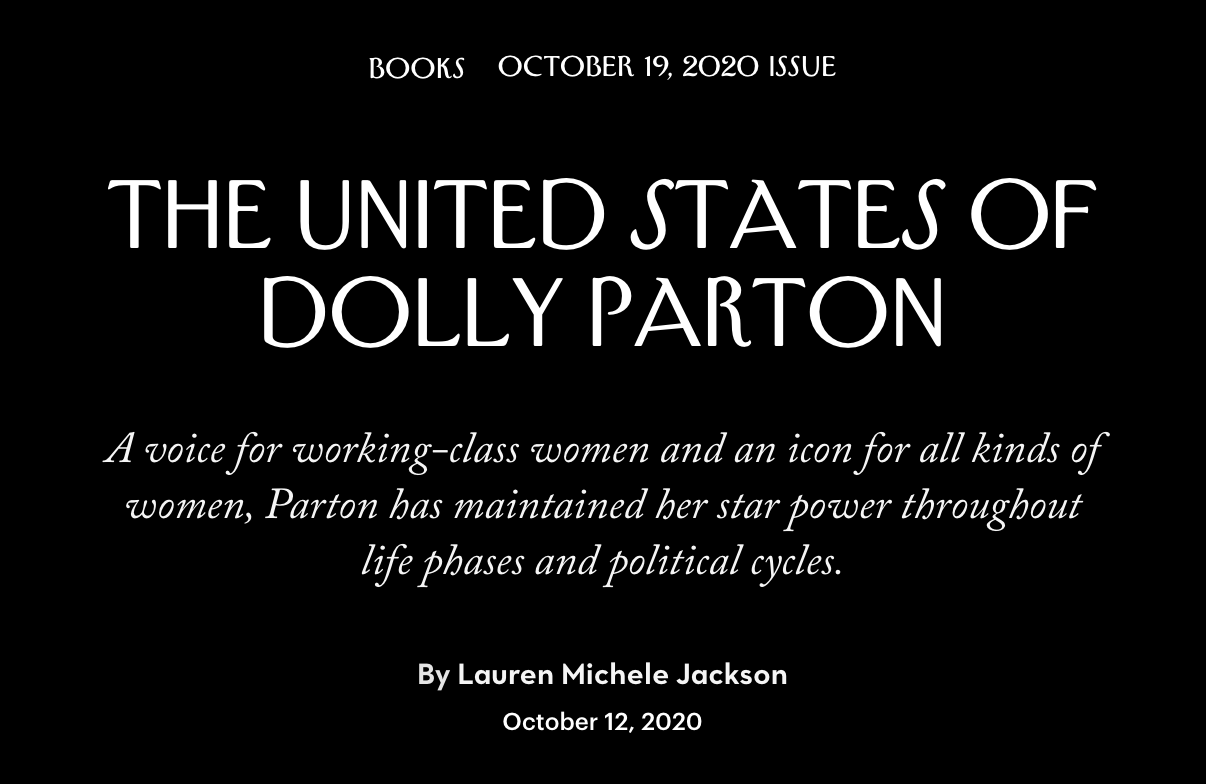 What I want to do is point out sentences that irritate me because they’re examples of Jackson showing off. Readers may not agree—after all, we all have different tastes in writing—but it irked me so much that the laws of physics ordained that I write this piece.  A note: the book Jackson is ostensibly reviewing is Sarah Smarsh’s “She Come by It Natural: Dolly Parton and the Women Who Lived Her Songs” apparently a gemisch of biography, music, and feminism. The Amazon blurb says this:

Far beyond the recently resurrected “Jolene” or quintessential “9 to 5,” Parton’s songs for decades have validated women who go unheard: the poor woman, the pregnant teenager, the struggling mother disparaged as “trailer trash.” Parton’s broader career—from singing on the front porch of her family’s cabin in the Great Smoky Mountains to achieving stardom in Nashville and Hollywood, from “girl singer” managed by powerful men to leader of a self-made business and philanthropy empire—offers a springboard to examining the intersections of gender, class, and culture.

Infused with Smarsh’s trademark insight, intelligence, and humanity, She Come By It Natural is a sympathetic tribute to the icon Dolly Parton and—call it whatever you like—the organic feminism she embodies.

Well, I have no objection to that purpose, and I’m not reviewing Smarsh’s book but Jackson’s writing about it. So here’s a few bits of Jackson’s prose that irritate me. In fact, I was so peeved that at times I couldn’t figure out what the author was trying to say, and finished the “review” with a sense of relief.

. . . . the particulars of Parton’s life story are grafted onto those of white working-class women, usually matriarchs within Smarsh’s own family—women who, like Parton, might never see themselves in feminist discourse but have been “living feminism” all along. These are women tested by poverty and patriarchy, who do what needs to get done and escape when it’s time, even if the fleeing lands them in another bad situation that they’ll soon need to escape. They’re women who are wronged (“Dagger Through the Heart”) or possibly doing wrong (“I Can’t Be True”), finding a soundtrack to their own loves in “Love Is Like a Butterfly.” They are, in Smarsh’s view, Parton’s muses, with lives resembling the main characters of her jubilant and sad-ass tunes. Parton is a genius, but all those stories come from somewhere. And, though Parton left and made a mint, the women she might’ve been kept on living. They understand Parton like few can, and, for the most part, their contributions to progressive consciousness have gone unsung except by Parton.

“Jubilant and sad-ass tunes” is showoffy, and the last two sentences are fairly opaque. What does it mean to say that “Parton left and made a mint”? Yes, she made a lot of dough, but what did she leave? As far as the last sentence goes, it’s not bad writing but it’s trite, simply saying that “women who lived the rough life that Parton did when young resonate more with her songs.” And what does it mean to say, “The women she might’ve been kept on living.” Does Jackson mean that Parton continued to write songs about the alternative lives she should have had?

Money saved from the Cas Walker show and other spots was spent on the customary teen-age fare—clothes, makeup, and peroxide—and local celebrity attracted envy at school, where she was sometimes bullied. The morning after [high school] graduation, Parton boarded a Greyhound in hot pursuit of the usual dream.

Jackson doesn’t tell us where Parton was going (Knoxville? Nashville?), and I’m irked by “local celebrity, which has no antecedent, and by “hot pursuit of the usual dream”, which is trite. I would never use the phrase “hot pursuit”. And what is the usual dream? Finally, it’s a Greyhound bus, for crying out loud. Not everyone knows what a Greyhound is.

[Porter] Wagoner, another farmer’s kid turned musician, had become the host of a syndicated weekly TV show, and signed her on as a singing sidekick, for an eye-popping sixty thousand dollars a year. Lean and glittering in his Nudie suits (likely designed by the quietly iconic Manuel Cuevas), and two decades her elder, Wagoner became, in the singsong language of a country duet, the sometime father, sometime lover of his partner.

Jackson doesn’t tell us who “Nudie” was (Nudie Cohn, a stylist who designed elaborate glittery outfits—including cowboy boots—for country music stars and singers like Elvis); instead, she name-drops Manuel Cuevas, a drop that makes no point whatsoever. This is the kind of name-dropping that cannot convey any useful information to the reader, who has no idea who Nudie or Manuel Cuevas was. What does “quietly iconic” mean?  “In the singsong language of a country duet” is showoffy and unclear: what, exactly, is “singsong language”, and how does it related to Wagoner’s multiple roles? Country duets are usually about love, not multiple roles.

By leaving, [Parton] entered the symbolic frequency shared by any woman who has broken free from a chauvinist, whether once tied by a ring, a child, or a contract.

What on earth is a “symbolic frequency”? I have no idea.  However, as a treat, I’ll put below the song Parton wrote as her farewell to Porter Wagoner, one of her finest compositions. Let’s proceed:

While Parton played the less than dutiful li’l lady, the second wave of feminism was happening all around her.

.In a delightful clip that has recently been making the rounds online, from an episode of the short-lived nineteen-eighties variety show “Dolly,” Parton leads Patti LaBelle in “a little rhythm” sounded, washboard style, from the clacking of their acrylic nails. Wearing similar puff-sleeved, sparkling black gowns, the two luminaries briefly harmonize a rendition of “Shortnin’ Bread,” the slave folk song, before collapsing into giggles. The moment can feel silly, but no doubt Smarsh would see its serious feminine brilliance. Acrylic nails, disparaged when seen on the hands of performers like Parton or Cardi B, may very well be responsible for some spectacular feats of songwriting.

I’ve put the clip below, which is fun, and the harmony is good. I can’t see it as “serious” feminine brilliance”, though.  But the last line, which tries to take nail clicking into the realm of the universal, is ridiculous. How, exactly, are acrylic nails responsible for some spectacular feats of songwriting? Is this a metaphor? If not, could Jackson give us an example of a spectacular nail-songs?

From there came the career superbloom that we associate with multiplatinum artists who cagily mix business and art. With the help of a new manager, Parton reinvigorated the celebrity portion of her stardom with a good brand plan, harvesting a popularity that already stretched across the Atlantic.

This is ugly writing: “superbloom”, “cagily” and “good brand plan”.

And here’s the last paragraph, which, according to New Yorker rules, must be clever.

At the time Smarsh wrote her book’s preface, dated March of this year, Parton hadn’t yet pledged anything toward the pandemic, but Smarsh was sure that she would, and Parton did—on April 2nd, she announced a donation of a million dollars to the Vanderbilt University Medical Center, for research into coronavirus treatments. All this could be feminism, or whatever Parton wants it to be—giving, giving back, walking in God’s light. When she’s fixing to change course, I trust she’ll let us know.

“Walking in God’s light”, presumably, reflects Parton’s religiosity, though in the entire article Jackson didn’t mentioned Dolly’s faith. I have no idea if she’s religious. And the last sentence is also irritating. “Fixing to change course” would presumably be the way Parton would say it, as “fixin”” is Southern argot for “planning to” or “about to.” But what does this last sentence mean? Change course in what way? How will she let us know, and why? Has she done that before?

As I said, these are just some of the irritating bits, and much of the article is fine.  I like Dolly Parton a lot—she seems genuine and in on the humor involved in her image—and for all I know Smarsh’s book is good. But Jackson needs a good editorial hand to keep her from intruding into the narrative, as well as to stop trying to make the particular into the universal—the most common flaw of New Yorker articles.

What a relief it was to turn to the next article: Anthony Lane’s review of a book about the poet John Berryman.. No show-offy writing, but prose that is simple, clear, and enlightening, yet stylish.

Since you’ve waded through my petulance, here’s Dolly singing “I Will Always Love You,” which I consider one of the best country songs ever. (Yes, she wrote it.) It comes right out of her life: it’s her farewell to Porter Wagoner when she left his show to strike out on her own. And this was performed on his show (he appears at the end):

22 thoughts on “Bad writing at the New Yorker”