Two days ago I reported that the President of Northwestern University {NU), Morton Schapiro, wrote a letter to the university community decrying the vandalism and obstructionism of protestors who are trying to get NU to disband its police force. He asserted that “while the University has every intention to continue improving NUPD, we have absolutely no intention to abolish it,” decried the protestors who camped illegally outside his house, criticized them for chanting obscenities outside his house (including calling him a “pig,” which he construed as anti-Semitic), and, at the end, expressed his willingness to engage in peaceful dialogue but added “I refuse to engage with individuals who continue to use the tactics of intimidation and violence.”

It was a remarkable letter given the tendency of university administrators to truckle and grovel before student demands, particularly on issues that bear on race—as the police issue does.  (The students argue that the NU police intimidate and terrorize black students.) Our Provost wrote a similar response after her house was picketed and she (of Chinese ancestry) was subject to racist slurs. Provost Lee also declared that the University of Chicago is not going to get rid of its campus police. (For those non-Americans unfamiliar with university police, yes, we have them and in some cases, as with our own police, we need them, particularly at large schools that take substantial policing and are located in high-crime areas.)

Of course, Schapiro’s refusal to abase himself enraged the students, and now an entire NU department, that of African American Studies, has published an equally strong (but to me, not equally convincing) response, and the students are calling on Schapiro to resign unless he meets all their demands.  These events are reported in two articles in the campus newspaper the Daily Northwestern, and you can read them by clicking on the screenshots below. 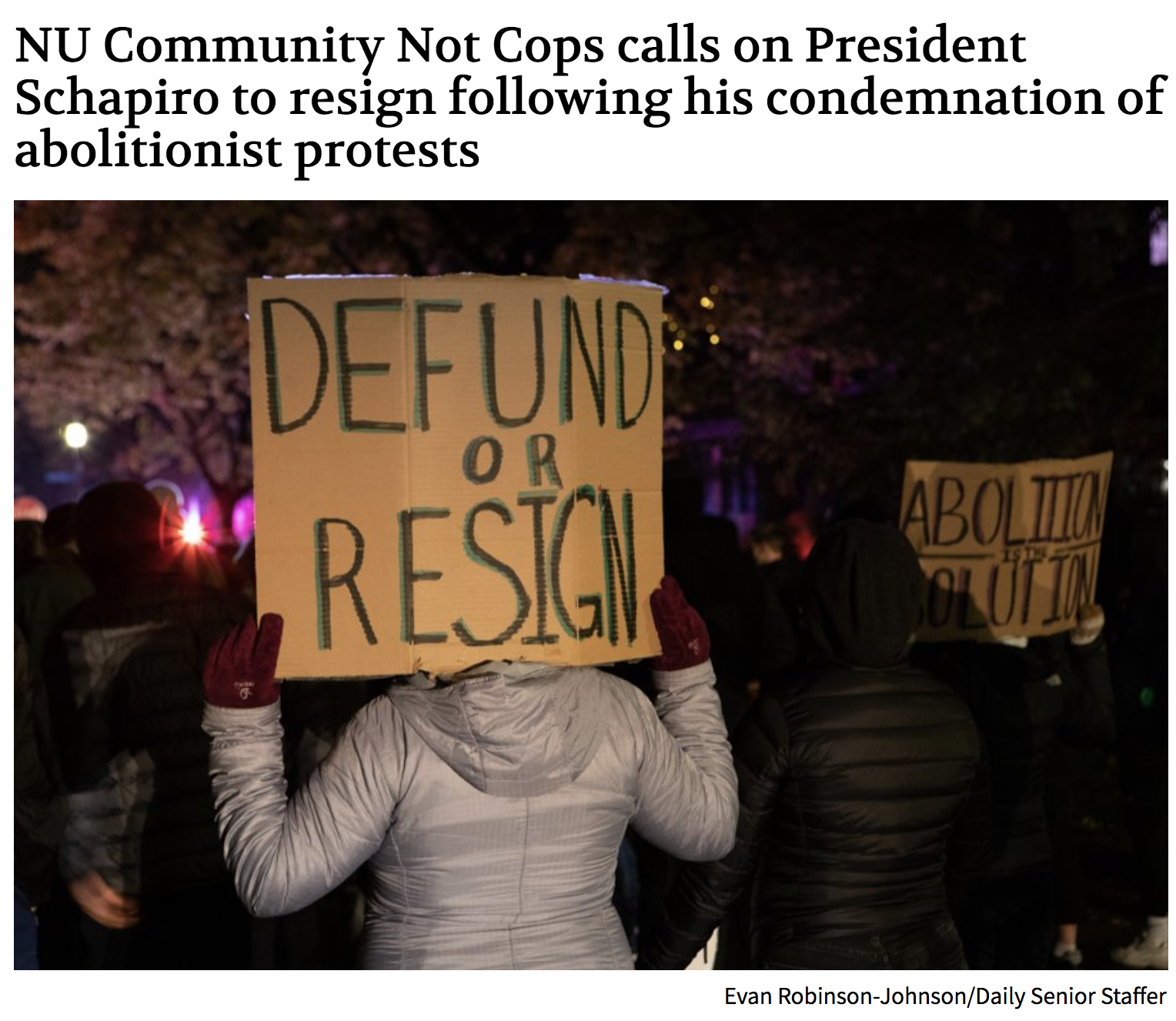 There’s not much new in the article, really, except for a few things. First, the second article gives a link to a response to Schapiro by an entire department of Northwestern. More on that in a second.

Contrary to Schapiro’s suggestion that the protestors may have included some “outside agitators” as well as students (I think he intended this to soften his accusations), the group denies any outside agitation. From the first article:

The organizers pushed back against Schapiro’s contention that their campaign purposely provokes police officers and that they are “outside agitators.” The group connected that language to President Donald Trump’s suggestion that Black Lives Matter protesters were paid actors and southern politicians deriding Civil Rights organizers as communist agitators.

Okay, then, we’ll assume that the vast majority of protestors are NU students.

Second, there’s a ludicrous response to Shapiro’s strong statement about the protestors below:

I ask the protestors to consider how their parents and siblings would feel if a group came to their homes in the middle of the night to wake up their families with such vile and personal attacks. To those protesters and their supporters who justify such actions, I ask you to take a long hard look in the mirror and realize that this isn’t actually “speaking truth to power” or furthering your cause. It is an abomination and you should be ashamed of yourselves.

. . . If you haven’t yet gotten my point, I am disgusted by those who chose to disgrace this University in such a fashion. I especially condemn the effect of their actions on our friends, neighbors and other members of our community who are trying to sustain viable businesses, raise families, study and do research, while facing a global pandemic and the injustices of the world without losing their sense of humanity.

As the paper reports, the protest group NU Community Not Cops responded this way:

They added that it’s an insult for Schapiro to draw on “racist, coded language” like “abomination” and vile.” Questioning whether Black protestors had “lost their sense of humanity” is inherently anti-Black, the group wrote.

Schapiro said nothing about black protestors; he was referring to the protestors in general. And words like “abomination” and “vile” are most definitely not “racist coded language.” This shows that the protestors will glom onto and exaggerate anything if it fits their narrative about race.

Finally, having survived the Sixties well aware that “pig” is a derogatory term for “cop”, I don’t think Schapiro should have implied that applying the term to him was anti-Semitic. I just think he was a bit clueless. But it was a still a vile abomination to call the president a “pig”. The protesting organization responded (from the NU paper):

Schapiro’s suggestion that “pig” is an anti-Semitic term stems from a medieval trope wherein Jewish people were depicted by European countries as engaging in lewd relations with pigs. NU Community Not Cops said they find it “absurd” for Schapiro to suggest that protesters were invoking this trope and not the word “pig” as it refers to the modern slang term about police.

NU Community Not Cops leaders condemned anti-Semitism in their statement, saying that their use of the term “pig” relates to the generations-long practice of Black radical movements invoking the structural violence presented by the police. Members of the campaign called Schapiro a pig, they said, because he has prioritized police and private property “over the lives of Black students.”

“We called Morty a pig because he’s a f–king cop,” one organizer said Monday night. “Can we get some oinks?”

Well, that’s an improvement, isn’t it?

The letter is the usual melange of assertions about harm, structural racism, and so on, and is striking in that despite its vehement assertions about violence, harm, and undue policing of black students, it gives no example, and only once piece of data (see below). As usual, I suspect that most of the assertions are simple grievances without much support. Here are a few statements that sound strongly like exaggerations:

Perhaps we are saddest given that this denunciation is the most full throated expression of “disgust” or call for “accountability” that we have heard from you or your office over the last 6 months—months in which our University and our country have seen so many displays of actual violence against Black people, Indigenous people, Asian and Asian American people, Latinx people, international students, transgender people, people with the temerity to wear masks, queer people, people speaking Spanish in public, and other marginalized groups nearly too numerous to name. Here at Northwestern, Black students wrote to you on June 3 and the Department of African American Studies wrote to you on October 15 detailing concerns about police violence and structural racism at Northwestern, and outlining a long list of remedies. Both were, at best, met with a pusillanimous response.

If there has been “so many” displays of violence by the University against minority people, not to mention against people waring masks, I don’t know about them. What is the “actual violence”? Was it real violence or only words? We don’t know.

They also drag in Trump’s misguided threat to withdraw funding from universities that teach Critical Race Theory (CRT), though, in mentioning it, the Department implies that CRT is essential for their antiracist scholarship. (By the way, Trump’s threat did not “criminalize” the teaching of CRT, much less the work of Northwesterns African American Studies Department.)

It is offensive in the extreme to read your prompt and strongly worded denunciation of nonviolent student protests given that there was NO letter denouncing the remote Zoom attack on the University’s Women’s Center this past spring, despite the vile and criminal child pornography that accompanied this attack, and NO letter reassuring Northwestern’s faculty of color—and all faculty who have dedicated their lives to writing, researching, and teaching antiracist scholarship—that the White House’s recent executive order criminalizing our work would find no purchase here. Even the police’s killing of George Floyd in Minnesota, which many people denounced months ago as nothing short of municipally-sanctioned murder, became, in your exceedingly brief statement, their “fatal mistreatment” of an unarmed man.

This is what it’s come to: unless Schapiro mouths the words that the death of George Floyd was “municipally sanctioned murder,” he’s toast. But we don’t even know whether Floyd’s murder (and it was a homicide) was motivated by racism. Further, there’s the implicit mission that CRT is the basis of the department, and I feel sorry for its students, who are clearly experiencing ideologically uncontested brainwashing.

The one complaint that does deserve investigation is the claim (also made against our own campus police) that the NU police come down disproportionately on minority students. If that’s the case, and if it’s not because minority students are involved in more incidents that require summoning the cops, then this needs to be investigated, and, if there’s bigotry, the police must be trained to be equitable. But the following still has the air of hyperbole.

To read your damning letter to students in this context forces us to hear the shallowness of your concerns and priorities with excruciating clarity. It is beyond tone deaf for you to ask this group of protesters to imagine what it would be like for their families to be disturbed in the middle of the night “by such vile and personal attacks.” In the wake of the murder of Breonna Taylor—who was shot and killed in her own home while sleeping in her bed in the middle of the night, and afforded no justice even in death—this is precisely what Black and brown people have been imagining and experiencing. These images are regularly, consistently accompanied and occasioned by the specter of the police’s terrifying power, and their failure to serve or protect communities of color. Here on campus, reporting by the Daily Northwestern documents the disproportionate policing of Black students. Whereas Black students comprise roughly 6 percent of the student population, 22-40% of NUPD field-initiated stops over the past two years have been of Black people.

At last we have a statistic, and I assume it’s the case. What we need to know is how many of the stops included students versus other people in Evanston (at the U of C, the police serve a huge area of largely black people not on campus), and whether the disproportionality reflects racism versus the alternative of Black students being involved in more reported incidents. If the former, then something needs to be done.

Finally, the letter goes after Schapiro for personalizing the debate by saying that “pigs” was anti-Semitic, but that his discomfort must pale before that of the anger of the students who constantly have “nightmarish experiences.” At the end, the letter states, “We condemn your failure to lead and imbue Northwestern with a grander and more humane vision for the present and the future.”

While the Department’s response is histrionic and full of hyperbole, the police issue needs to be (and I hope is) getting investigated. But in the meantime, Schapiro is right in that NU should be improving its campus police but not abolishing them.

What makes this serious is that an entire department has turned against the college President. What with the students calling for Schapiro’s resignation, and the protests continuing (yes, there was illegal activity, window-breaking, graffiti, and so on), Schapiro’s job may be in jeopardy.

I hope not, for there are precious few college administrators willing to stand up to offended and woke students. If Schapiro goes, it’s a message to all college presidents that they must grovel before the demands of their students, even if those demands are unreasonable.