You may not know this, but Palestinians regularly seek and get medical treatment in Israeli hospitals, and are rarely refused entry into Israel for that.  For a Palestinian to avail themselves of the world-class health care available in Israel, they have to meet three conditions:

This practice has been going on even before Israel was a country, with the Jews treating their enemies. And, in fact, there is a lot of cooperation between Palestinian and Israeli doctors, with Palestinians training in Israeli hospitals and the two classes of doctors often becoming personal friends. (Would that this would extend to the groups as a whole!)

Now why does Israel do this, despite being characterized as an apartheid state? After all, it doesn’t have to treat Palestinians. Well, there are several possible reasons for this, and I don’t know which one is right; it’s probably a combination of these factors:

I can’t tell you why this happens, but it certainly doesn’t paint Israel as a demonic state in this respect, even though there’s a common and false rumor in Palestine that Israelis harvest organs from dead Palestinians to transplant into rich Israelis (this is the modern version of the “blood libel“).

Since 1995, thousands of Palestinians have gone to Israeli hospitals for treatment. (In 2019, 20,000 permits were granted for this.) Then, this year, Mahmoud Abbas, the President of Palestine, stopped all this traffic. Why? He was angry because Israel began deducting from the money it transferred to Palestine the amount of money that Palestine budgets to reward the families to jailed terrorists in Israel (a substantial amount: millions of dollars per year in a policy called “pay for slay”. (Some of that money actually comes from the EU.) Another reason, raised later, was Israel’s statement that it was going to put 30% of the Jewish West Bank under Israeli jurisdiction.

Regardless of the reasons, the halting of medical traffic from Palestine to Israel has already led to several Palestinian deaths, including children dying of cancer. To make a political point, Palestine is willing to let its citizens die.

Except when the citizens are bigwigs.

Now, in exception to this policy, the secretary general of the PLO and chief Palestinian negotiator Saeb Erekat is in an Israeli hospital in Jerusalem, where he was rushed by ambulance on Sunday suffering from coronavirus. Erekat had pre-existing conditions (a heart attack and a lung transplant—in the U.S.—in 2017). The BBC reports that Erekat is in critical condition, in a medically induced coma and on a ventilator.

Like many Palestinian officials, Erekat has a long history of denouncing Israel, and has called it an “apartheid regime worse than that of South Africa.” Yet when he’s in trouble, he chose to be treated at an Israeli hospital—despite the fact that his fellow Palestinians are now denied the opportunity.

Why am I writing this? Though it does show the hypocrisy of Palestinian policy in allowing bigwigs to get world-class medical care while the average Palestinian cannot, I simply wanted to show that Israel will provide good medical care to the representatives of its enemies, and even the daughters of terrorists. You can say this is all for show, and I can’t prove you wrong, but 20,000 patients per year? At least these are not the actions of an “apartheid regime.” Israel is the Rodney Dangerfield of nations: it can’t get no respect.

I close with a quote from the BBC report:

The director of the Hadassah Medical Center, Prof Zeev Rothstein, said on Sunday: “Mr Erekat is receiving top-notch professional care like all serious corona patients at Hadassah, and the staff will do everything to assist his recovery.”

“At Hadassah, we treat every patient as if he were our only patient.”

Sources used in this report, beyond those cited above, are here, here, here, here, and here. Two are Western sources, and the others are Israeli or pro-Israel sources. I’ve tried hard to get the facts right, and will correct any errors I’ve made.

Erekat (photo from the BBC report): 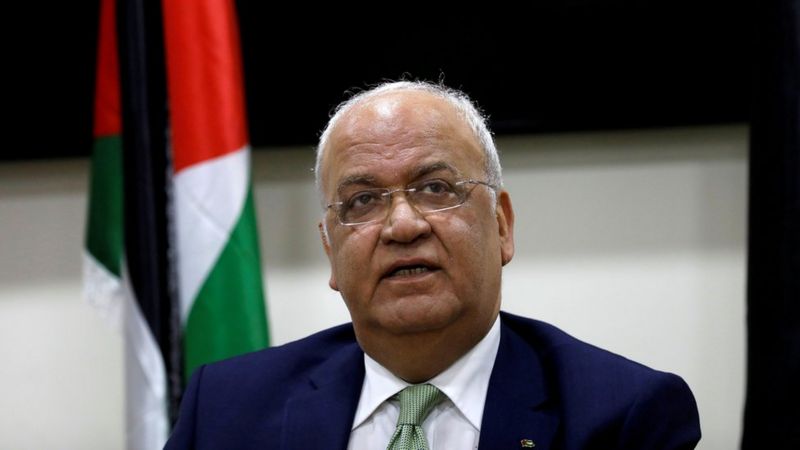 18 thoughts on “Senior Palestinian official with Covid-19 treated at Israeli hospital, despite a recent ban on “regular” Palestinians being treated in Israel”