As I reported recently, Trader Joe’s grocery emporium has been accused of racism for using names like “Trader Ming’s” for its Southeast Asian foods, “Trader Giotto’s” for Italian foods, and “Trader José’s” for Mexican food and drink. There’s apparently also a “Baker Josef’s” line of baked goods, like pretzels, imported from Germany. The company first agreed to ditch those names, but then reversed course and said it was keeping them.

When I added a readers’ poll asking you to weigh in on whether the company should ditch these names, the results (below) were heavily in favor of keeping the names, with many readers saying the equivalent of “lighten up” in the comments. I think I agree now, as I can’t see anything damaging to people with these names. It’s not like Aunt Jemima’s pancake mix or syrup, which had an old-time Mammy stereotype as a symbol. Seriously, if you think buying “Trader Jose’s Cerveza” is a racist stereotype, and call it to the attention of the company, you probably have too much time on your hands. 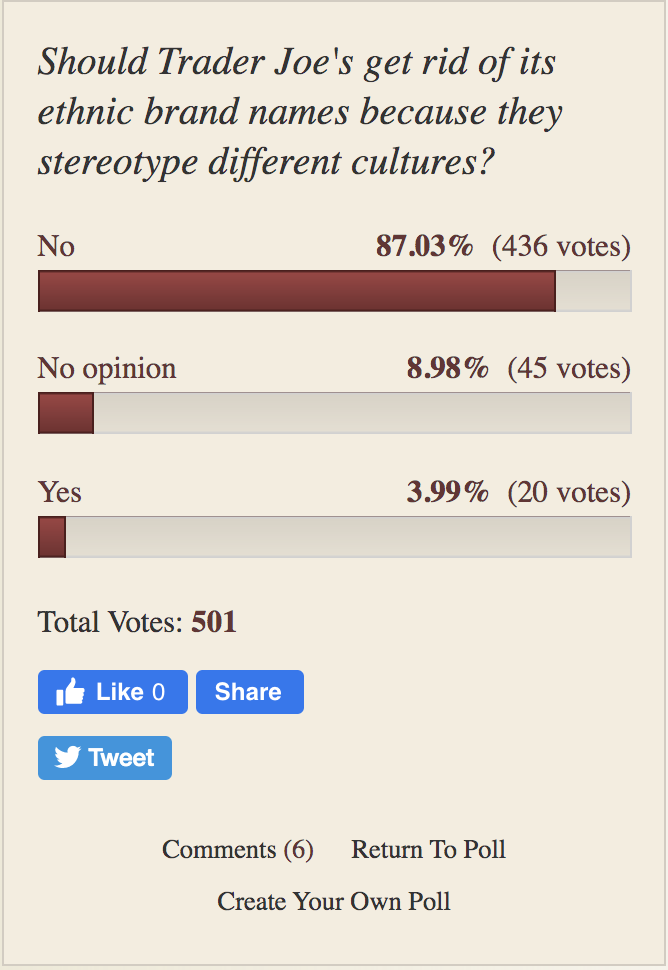 So the company’s decision not to truckle to the Woke was a welcome but rare instance of fighting back against social-justice mobbery. Some, however, have not taken this reversal well. One is the Los Angeles Times, whose business writer penned a whole article about how Trader Joe’s product names can “break your heart” (click on screenshot to read if it’s not paywalled). 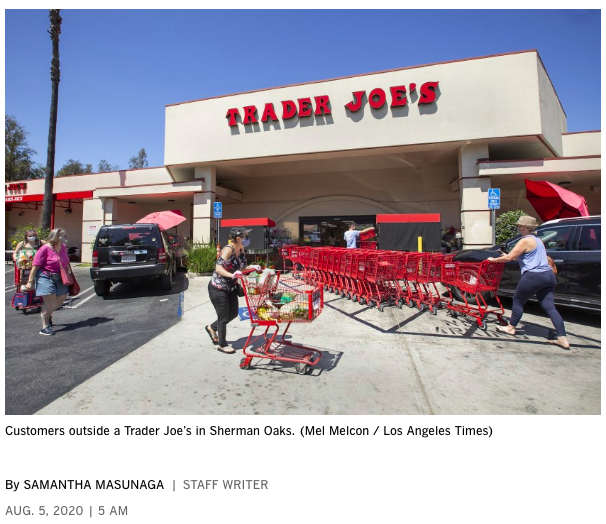 The weird thing about the article is that it interviews three people, only one of whom is opposed to the “racist” names—yet the headline implies that hearts are being broken throughout the U.S. Further, the paper took a poll:

More than 80 of the 100-plus readers who responded to The Times’ call for opinions said the labels would not change their feelings about Trader Joe’s or its products. Several said that the controversy was overblown, that the labels were simply part of the chain’s whimsical brand or that the packaging paid proper tribute to cultures.

No hearts broken there! And the author of the article even concludes that “the controversy isn’t expect to cause the chain lasting damage.” So why the weaselly headline, which appears to be some editor’s or author’s opinion that isn’t reflected in the story itself?

Here’s the one offended person:

“The packaging is just the bottom of the barrel, the low-hanging fruit” that’s easy to change, said Huerta, a 30-year-old transportation planner from El Monte. “This is really a time where companies need to reflect on what their goal is in this movement and how they can push forward racial justice in their day-to-day operations.”

Grania used to tell me, when we were discussing campaigns like this, that I should judge their value by asking myself, “If the offended got their way, would things change for the better?” And in this case I can’t see that it would. If “Trader Ming’s pork dumplings” become “Trader Joe’s Pork dumplings”, will racial equity be advanced? Have people confected stereotypes of Asians based on that name? I can’t imagine they have.

One person even liked the German name, though she was a German immigrant, but she was careful to qualify her words:

As a German immigrant, Roswitha Koeper, 32, said she liked seeing bread products and pretzels imported from Germany on Trader Joe’s shelves, some of which were branded “Baker Josef’s” — though she emphasized that her experience as a white German immigrant was very different from the experiences of people of color.

“It always kind of makes me happy to see that [Baker Josef’s label] because for me … that means that they just went out of their way to see where this product comes from,” she said.

Now I don’t read the L.A. Times as it’s always paywalled, and three subscriptions (WaPo, NYT and Andrew Sullivan’s Dish) are enough for me. Is it just as woke as those first two newspapers? If not, then some editor, or the author, slipped in an ideological statement in a report whose contents contradict the headline. Broken hearts, indeed!

52 thoughts on “Et tu, L. A. Times? Trader Joe’s decision to keep brand names is touted as “breaking your heart””