UPDATE: Reader Daniel Sharp has a positive review of Cynical Theories in the New English Review.

I’ve now finished Pluckrose’s and Lindsay’s new book, and can recommend it to readers (it has a pretty good position on Amazon though it won’t come out till August 25). Click on screenshot to go to the Amazon site: 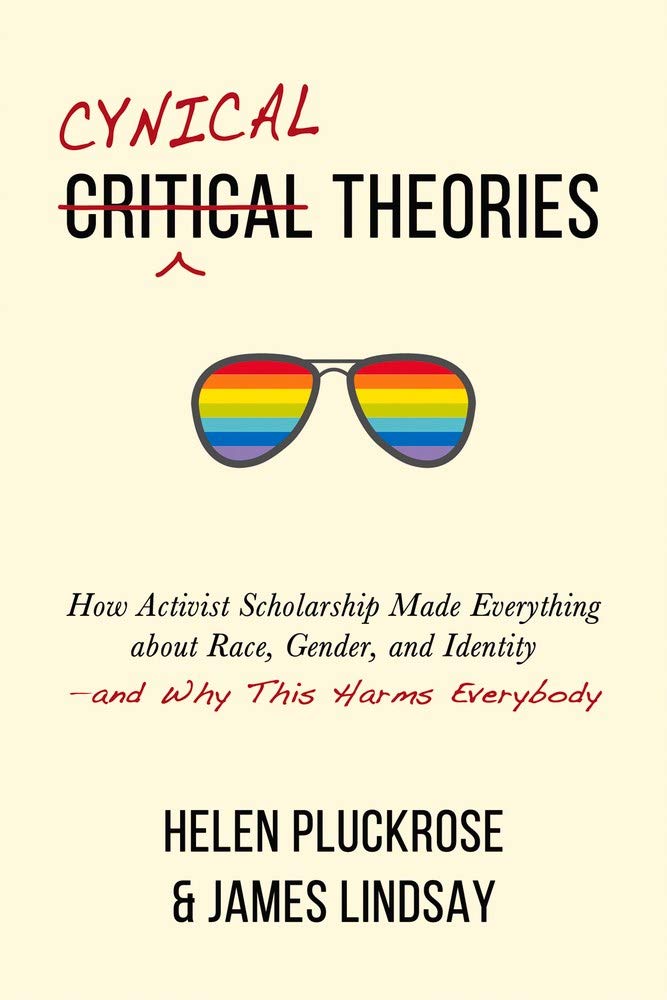 It’s more academic than I imagined and less of a screed against Social Justice (which they capitalize to indicate the woke version against classical “liberal” social justice), but I found that emphasis refreshing. While casting aspersions on the value of “Social Justice”, they spend much more time drawing out its roots in Postmodernism, which transformed itself into what they call “Theory”: the postmodern philosophy of activism that has two tenets. Their characterization of “modern” postmodernism involve these propositions (quoted from p. 31 of their book):

The postmodern knowledge principle.  Radical skepticism about whether objective knowledge or truth is obtainable and a commitment to cultural constructivism.

The postmodern political principle. A belief that society is formed of systems of power and hierarchies, which decide what can be known and how.

We can dismiss the first one for reasons I’ve discussed before; the second is the basis for all “Social Justice” activism.

Their schema involves four “themes” of postmodernism: the blurring of boundaries, the power of language, cultural relativism, and the loss of the individual and the universal. The last principle involves a vision of society as a mixture of identity groups competing for power: a zero-sum jockeying to oppress others, with cis white males currently on top.

And this last idea, the replacement of the universal and the individual with competing groups, made me think (the book is good at promoting thought), and then realize why, when I was such a big advocate of the goals of the Civil Rights movement of the Sixties—at least instantiated by Martin Luther King and his followers—I am much more dubious about today’s Civil Rights movement as embodied in the Black Lives Matter program. Although I abhor the use of violence to attain any political goal, and there’s a lot of tacit endorsement or ignoring of demonstrators’ violence in the modern movement (I’m not exculpating the police here), in contrast with the foundational nonviolence of Dr. King, that’s not the main reason I am less enthusiastic about the current  wave of antiracism.  Yes, the goal of both movements was equality, but the modern movement comes with an emphasis on group identities that I see as repellant and ultimately divisive.

The passage below from Cynical Theories (p. 261) was sort of an epiphany for me, and I’ve copied it out:

. . . the critical approach to Social Justice encourages tribalism and hostility by its aggressively divisive approach. Whereas the Civil Right Movements worked so well because they used a universalist approach—everybody should have equal rights—that appealed to human intuitions of fairness and empathy, Social Justice uses a simplistic identity politics approach which ascribes collective blame to dominant groups—white people are racist, men are sexist, and straight people are homophobic. This explicitly goes against the established liberal value of not judging people by their race, gender, or sexuality, and it is incredibly naive to expect it not to produce a counter-revival of old right-wing identity politics. Arguments that it is acceptable to be prejudices against white people, men, straight, or cisgender people because of historical power imbalances do not work well with human intuitions of reciprocity.

If a majority feels threatened by a vocal minority with institutional power, it is likely to try to change those institutions, and not merely because of paranoid fears about losing dominance and privilege once had. If it becomes socially acceptable to speak of “whiteness” and call for punishment of anyone who can be interpreted as expressing “anti-blackness,” this will be experienced as unfair by white people. If it becomes acceptable to pathologize masculinity and speak hatefully of men while being hypersensitive to anything that can be called “misogyny,” almost half the population (as well as much of the other half who loves them), is likely to take this badly.  If cisgender people, who are 99.5 percent of the population, are accused of transphobia for simply existing, failing to use the correct terminology, allowing genitals to influence their dating preferences, or even having non-queer Theory beliefs about gender, this is likely to result in much unfair antagonism against trans people (most of whom do not believe in this either).

As a classical liberal (or so I see myself), I have an instinctive revulsion towards the practice of dividing society up into competing groups and demonizing them on an oppression scale. Yes, of course we need to work towards equity, for the residual effects of slavery and bigotry are still bloody obvious in society. Dr. King’s tactics went a long way toward rectifying inequalities: who can deny that minorities are better off now than, say, in 1960?

Still, I fear that division and identity politics won’t be so efficacious—for reasons outlined by the authors above. (They also discuss the “negative stereotypes” created by Theory, including the infantilization of women and the “soft bigotry” against blacks as instantiated by the “white culture” posters at the National Museum of African American History & Culture and the patronizing tone of Robin DiAngelo’s White Fragility criticized by John McWhorter in his review of the book.)

And I resent any movement that makes the untestable claim that all white people not only have benefited from “privilege”, but are imbued with often unconscious bigotry. Or that males are inherently misogynistic, and we inhabit a “rape culture.” You wouldn’t hear Dr. King making divisive claims like that, for his appeal was to unity: to universal sentiments that were not personal attacks but irresistible appeals to justice.

Now many of us (Including to some extent me) have been cowed by Social Justice advocates into silence, for who wants to be labeled a bigot, a sexist, or a transphobe? Further, I constantly hear that we’re wasting our time on criticizing our own side: that we have bigger fish to fry, including a large smelly one named Trump. Why don’t I just become like HuffPost and write about the odiousness of Trump all the time? But divisiveness is just want Trump wants; he uses it all the time to try to promote his moribund campaign for President. More important, when the Democrats win in the fall, and the college students have moved on to grasp the levers of power in the media and government, I don’t want to face fighting an Authoritarianism of the Left, with its cancel culture, demands, and policing of speech. To prevent that, we need to start pushing back now on the extreme Left.

So I was heartened by Pluckrose and Lindsay’s final couple of pages in which they promote not only open criticism of the pernicious and authoritarian form of Social Justice, but put forth positive principles of classical liberalism. You can, and should, read that for yourself. I’ll quote only one more paragraph:

The solution is liberalism, both political (universal liberalism is an antidote to the postmodern political principle) and in terms of knowledge production (Jonathan Rauch’s “liberal science” is the remedy for the postmodern knowledge principle). You don’t need to become an expert on Jonathan Rauch’s work, or on John Stuart Mill, or on any of the great liberal thinkers. Nor do you need to become well versed in Theory and Social Justice scholarship, so that you can confidently refute it. But you do need to have a little bit of courage to stand up to something with a lot of power. You need to recognize Theory when you see it, and side with the liberal responses to it—which might be no more complicated than saying, “No, that’s your ideological belief, and I don’t have to go along with it.”

This book will help you recognize Theory when you see it, and then you’ll start seeing it everywhere: in the New York Times, in the Washington Post, in the petulant acts of cancel culture, and on most every college campus in America.

62 thoughts on “Social justice, then and now”