Today’s photos come from reader Doug Hayes, and all the notes (indented) are his. My own title is “At the feeder,” and it shows the diversity of wildlife you can see (including mammals) by putting out bird feeders.

Since we put up the bird feeders, more birds and a couple of mammals have been frequenting our Richmond, Virginia backyard. They usually start around sunrise and eat until just before noon. Then in the mid afternoon, the second round of feeding starts. The house finches are the biggest customers, arriving in flocks of a dozen or more and squabble for space around the two feeders and the suet block. I think that we are seeing so many birds now because more and more people and their dogs are using nearby Forest Hill park and have driven the birds into the neighborhood.

A female House finch (Haemorhous mexicanus) shows off her levitation skills while waiting for an opening at the feeder. It is not unusual for six or more finches to mob the same feeder, with several more perched nearby. The red-headed bird is a male House finch and the shy bird at upper right is a Carolina wren (Thryothorus ludovicianus). 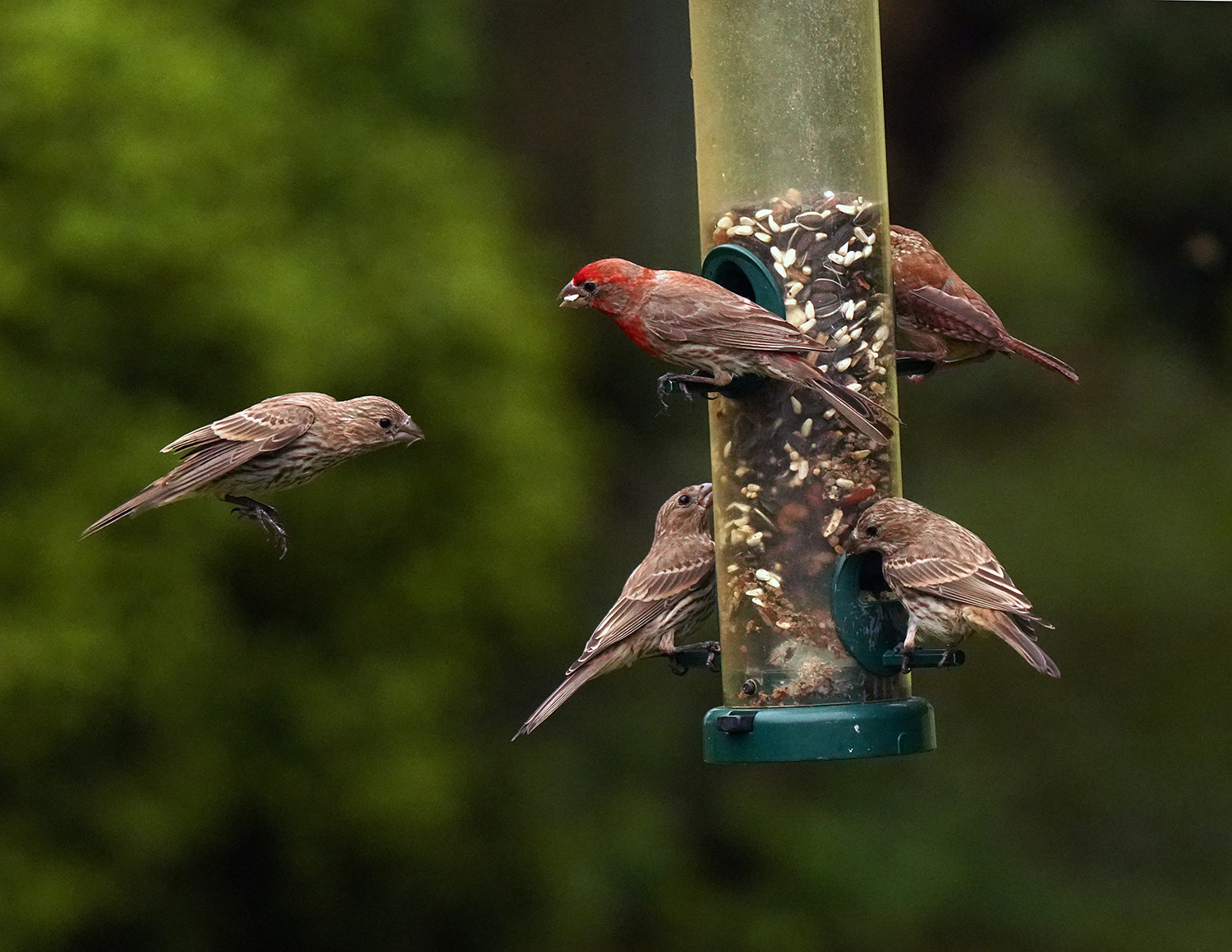 A male Northern Cardinal (Cardinalis cardinalis) tries to figure out how to get the goodies. This bird is more orange than the normal red of a male cardinal (there are several color mutations found in male cardinals ranging from red to shades of orange to pure yellow). This male has been hanging around the tree where the mated pair of cardinals that I have been photographing live. He gets chased away by the red male for his troubles. 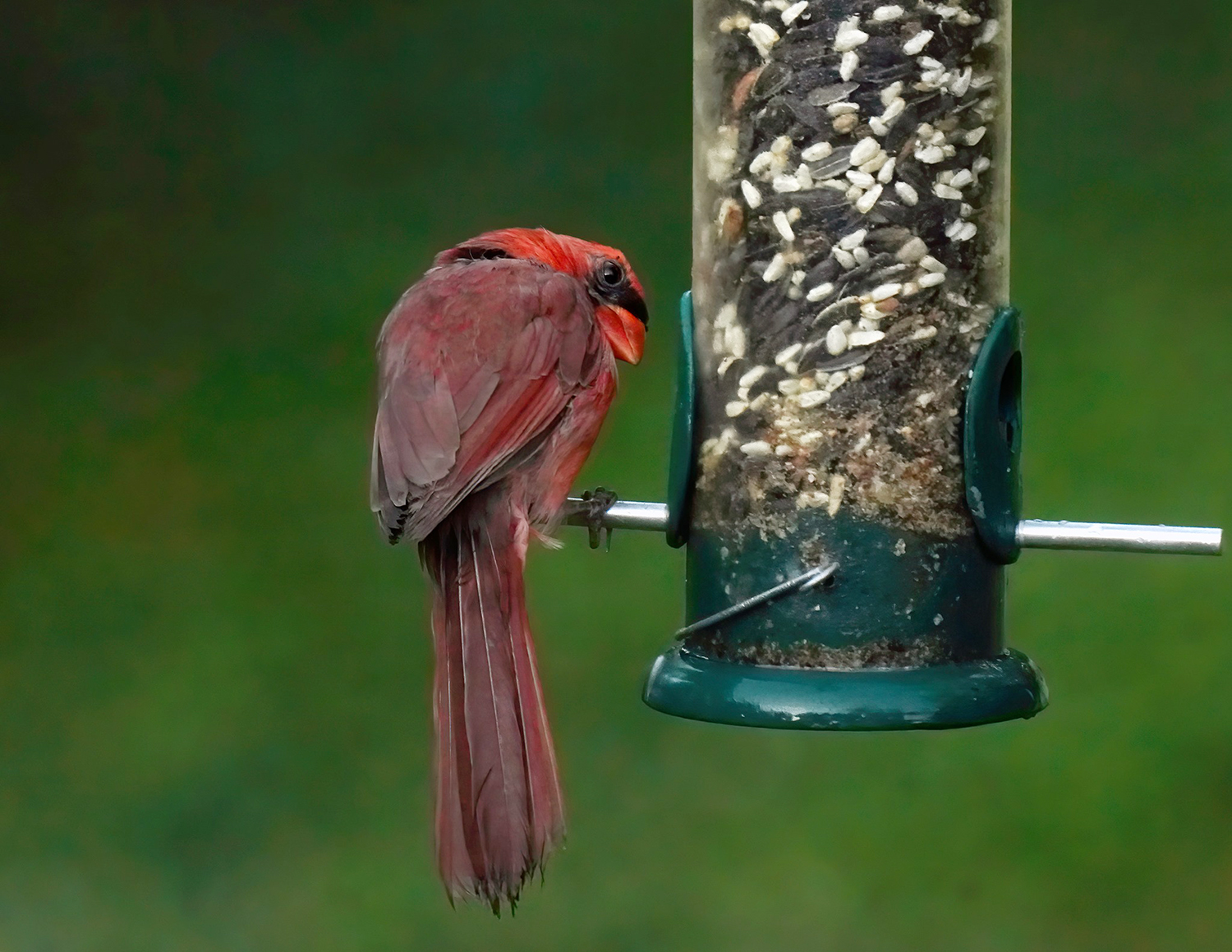 This Eastern chipmunk (Tamias striatus) shows up at least twice a day to eat and gather seeds that spill out of the bird feeder. 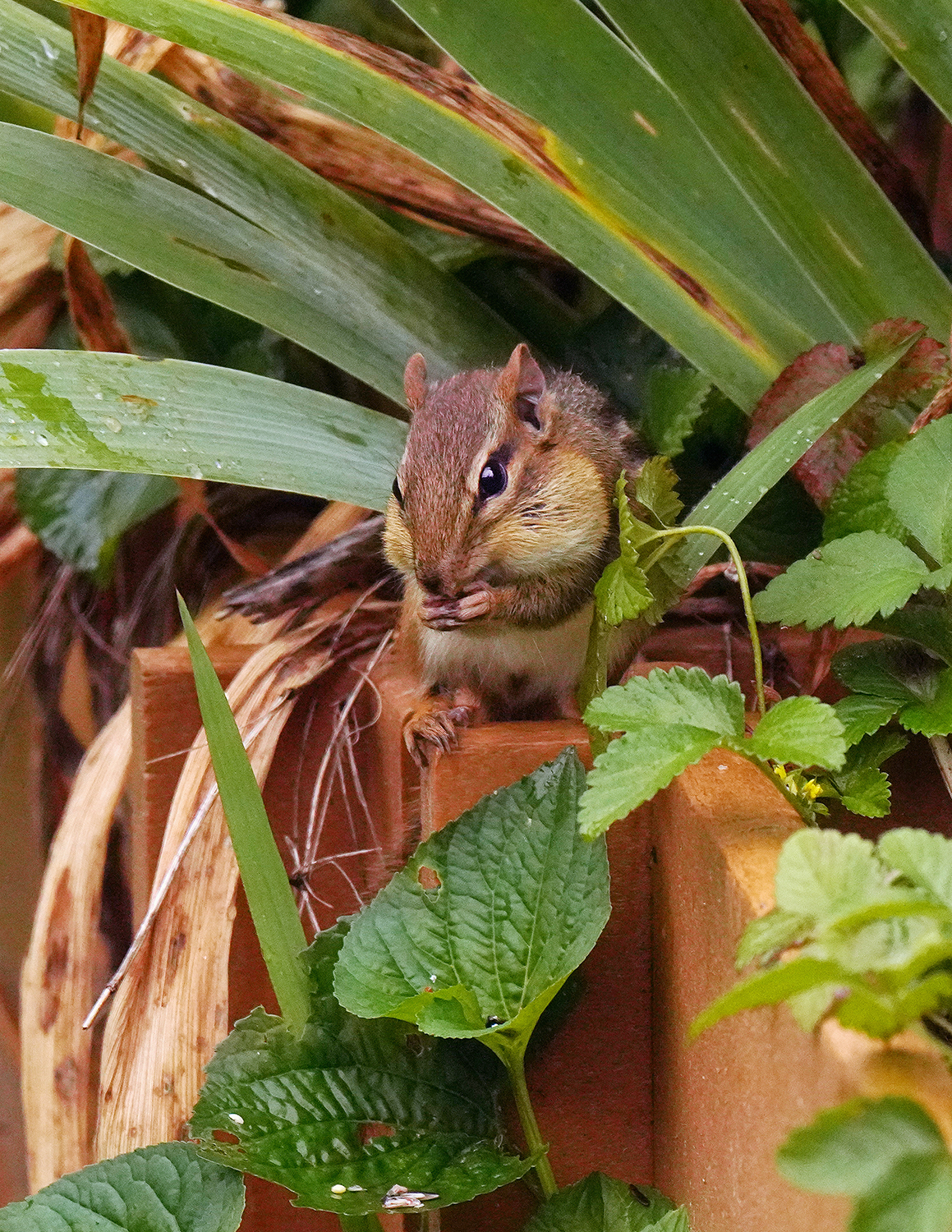 American robins (Turdus migratorius) are the second most frequent visitors to the feeders after the House finches. They go strictly for the suet. 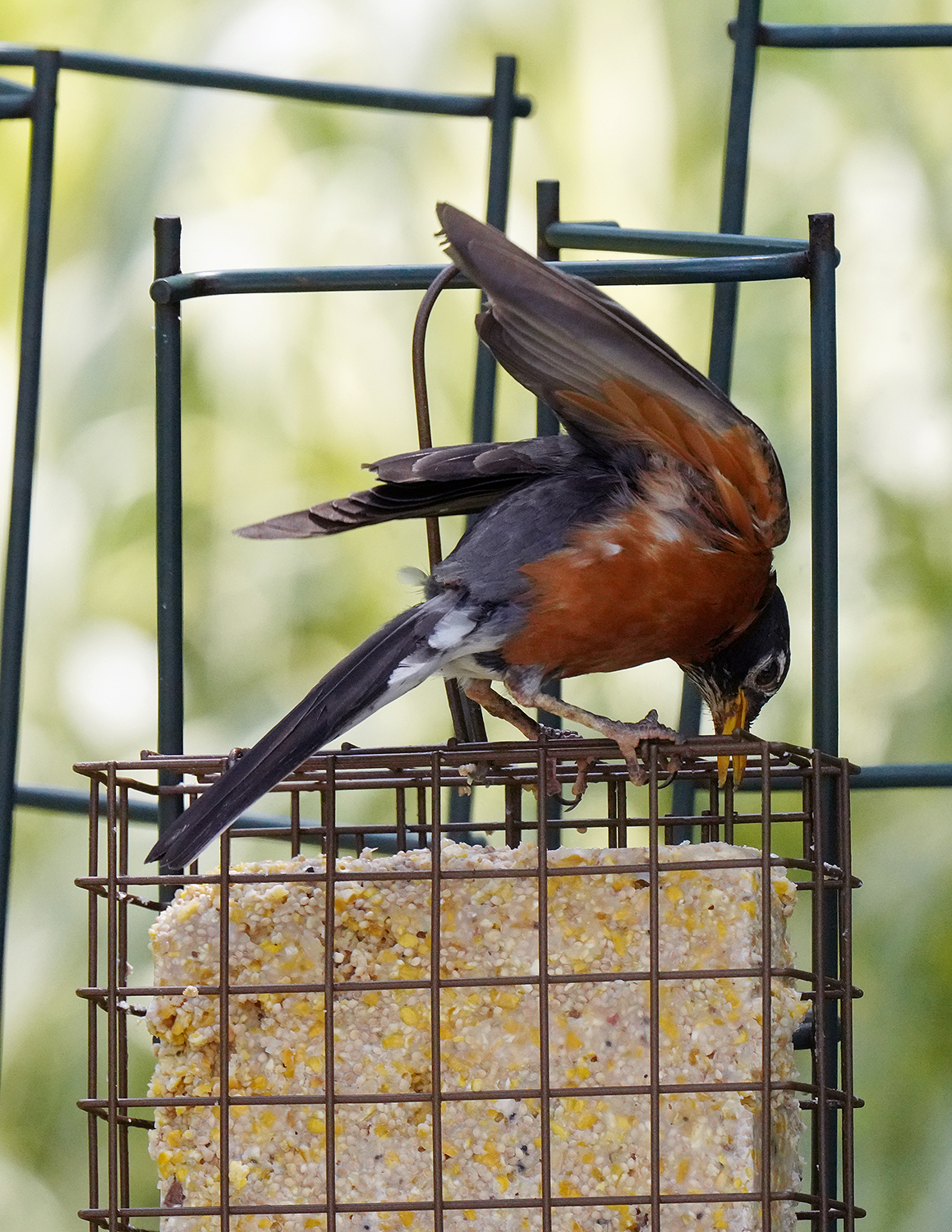 A Gray catbird (Dumetella carolinensis) going for some suet. A few months ago, the yard was full of catbirds attempting to move into the tree near the cardinal pair, but the cardinals drove most of them away. Now I only see a few and they steer clear of the cardinals’ territory. 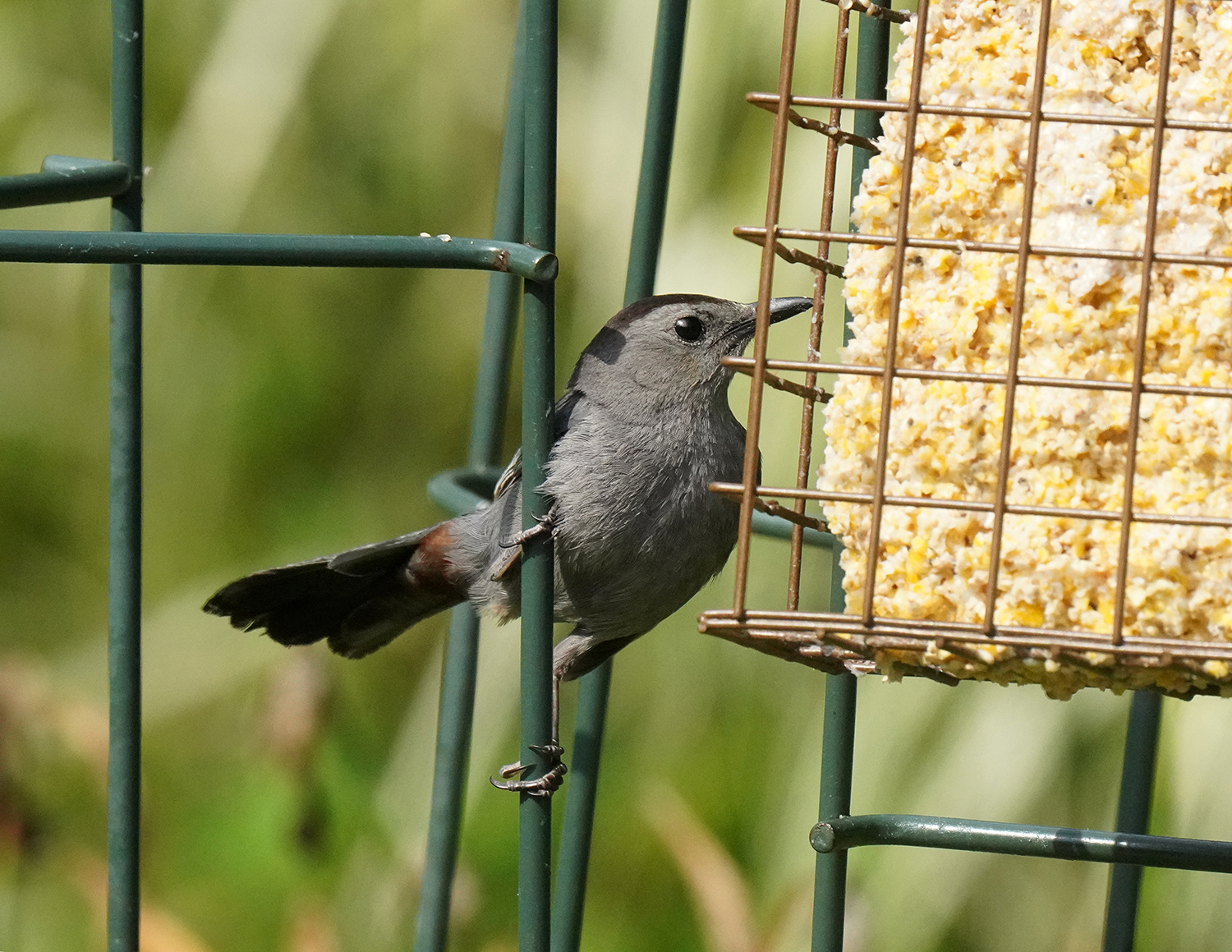 A pair of American crows (Corvus brachyrnchos) showed up about a week ago.  They come to the suet feeder after most of the House finches leave and stick around for only a few minutes. 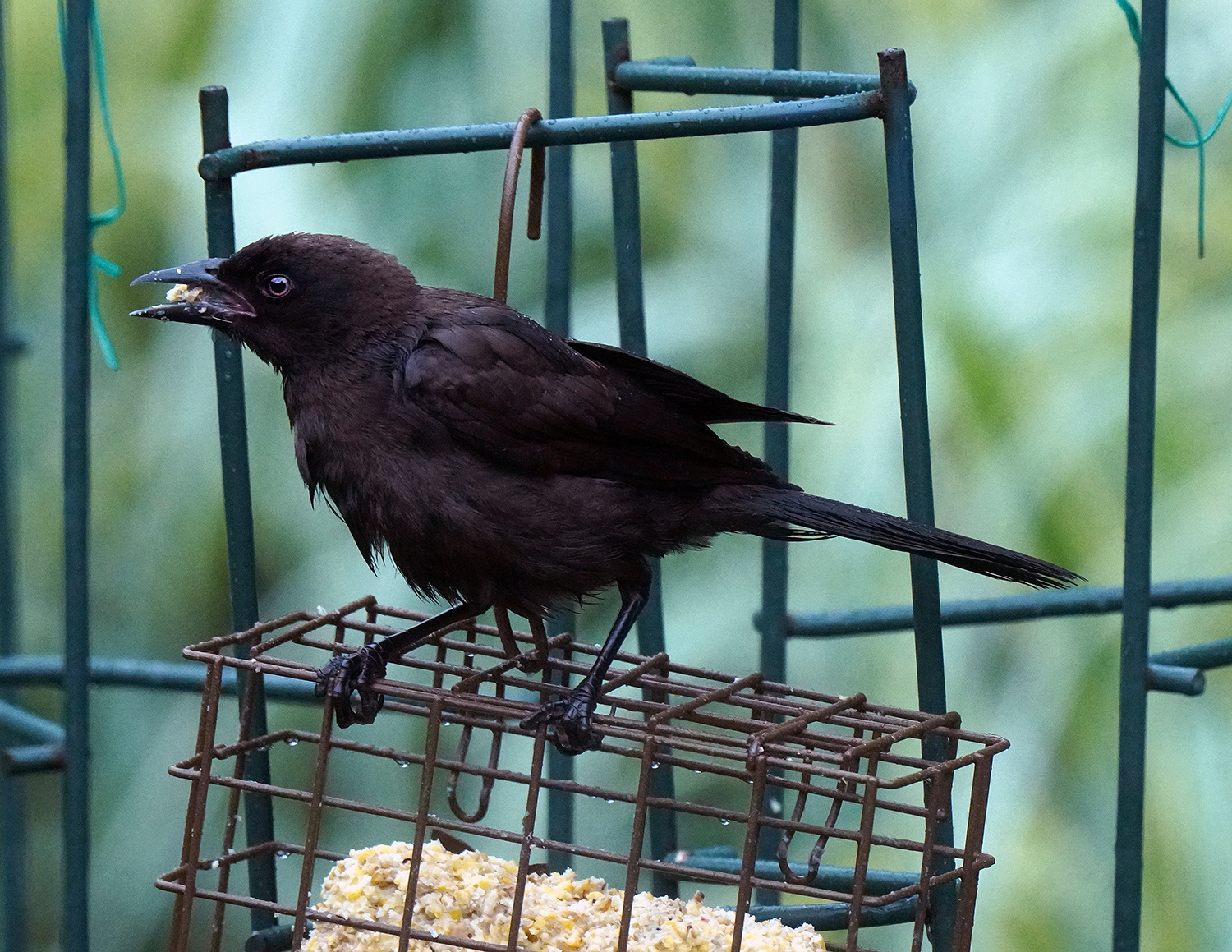 A female Red-bellied woodpecker (Melanerpes carolinus), showing off how far she can twist her head around. 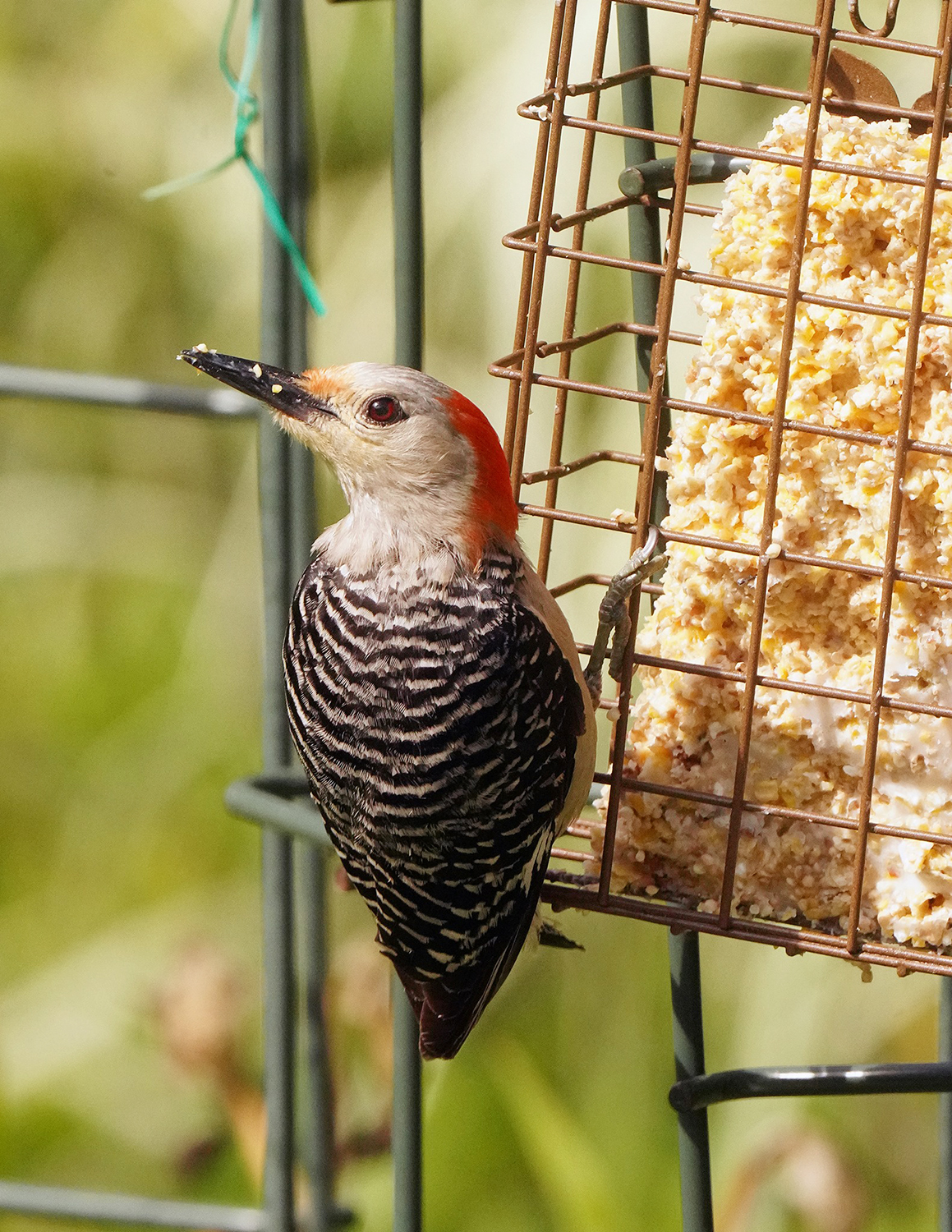 Bird feeders are magnets for Eastern gray squirrels (Sciurus carolinensis). The pole supporting the feeders is new and the paint is too slippery for the squirrels to climb, so they content themselves with gathering seeds scattered by the birds or raiding the suet feeder. This guy found a comfortable perch and used his paws to stuff his face for over 20 minutes. 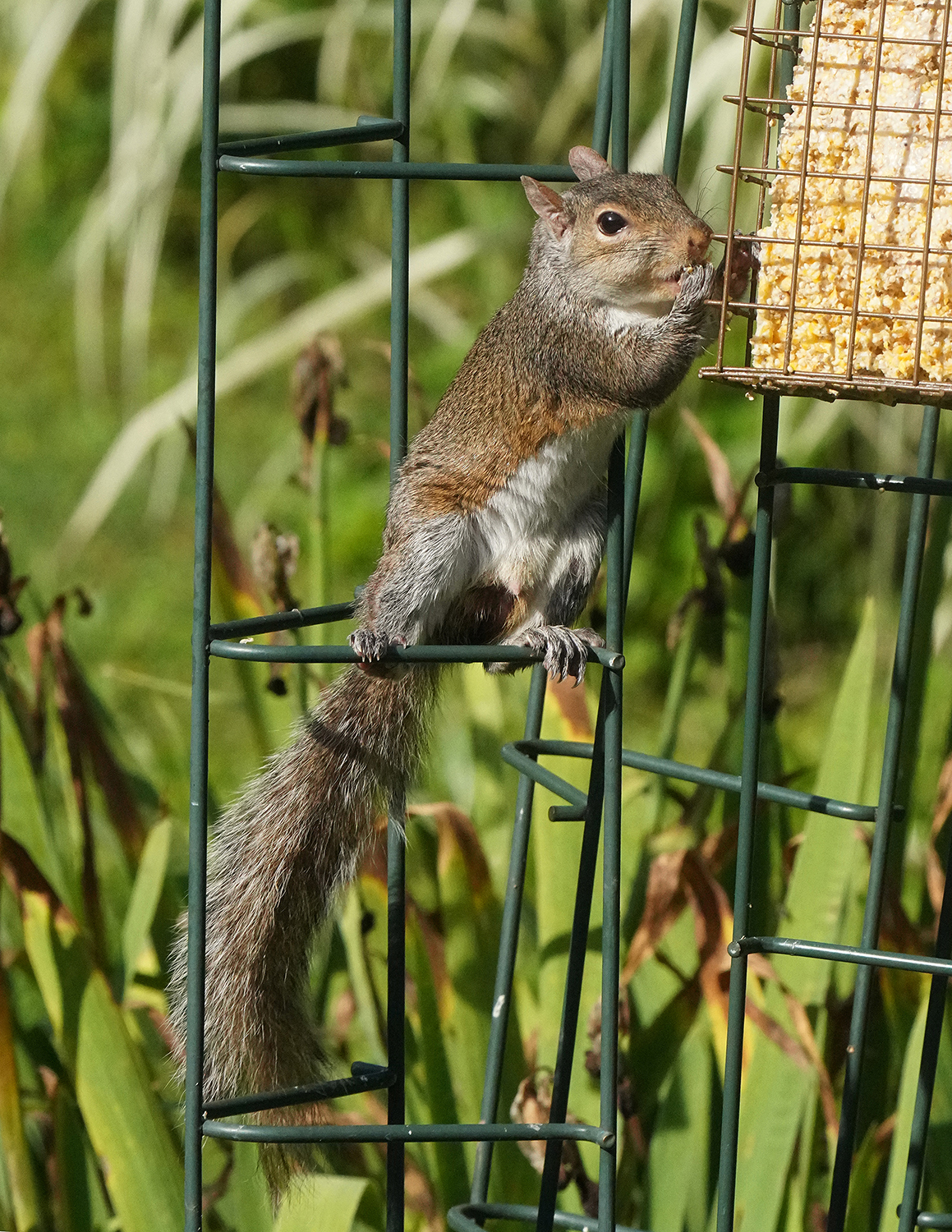 The aptly named Brown thrasher (Toxostoma rufum) is a larger, meaner cousin of the mockingbird. They will aggressively defend their territory if you come too close to their nesting area, frequently drawing blood. This one is waiting on the woodpile for some of the traffic at the suet feeder to die down. 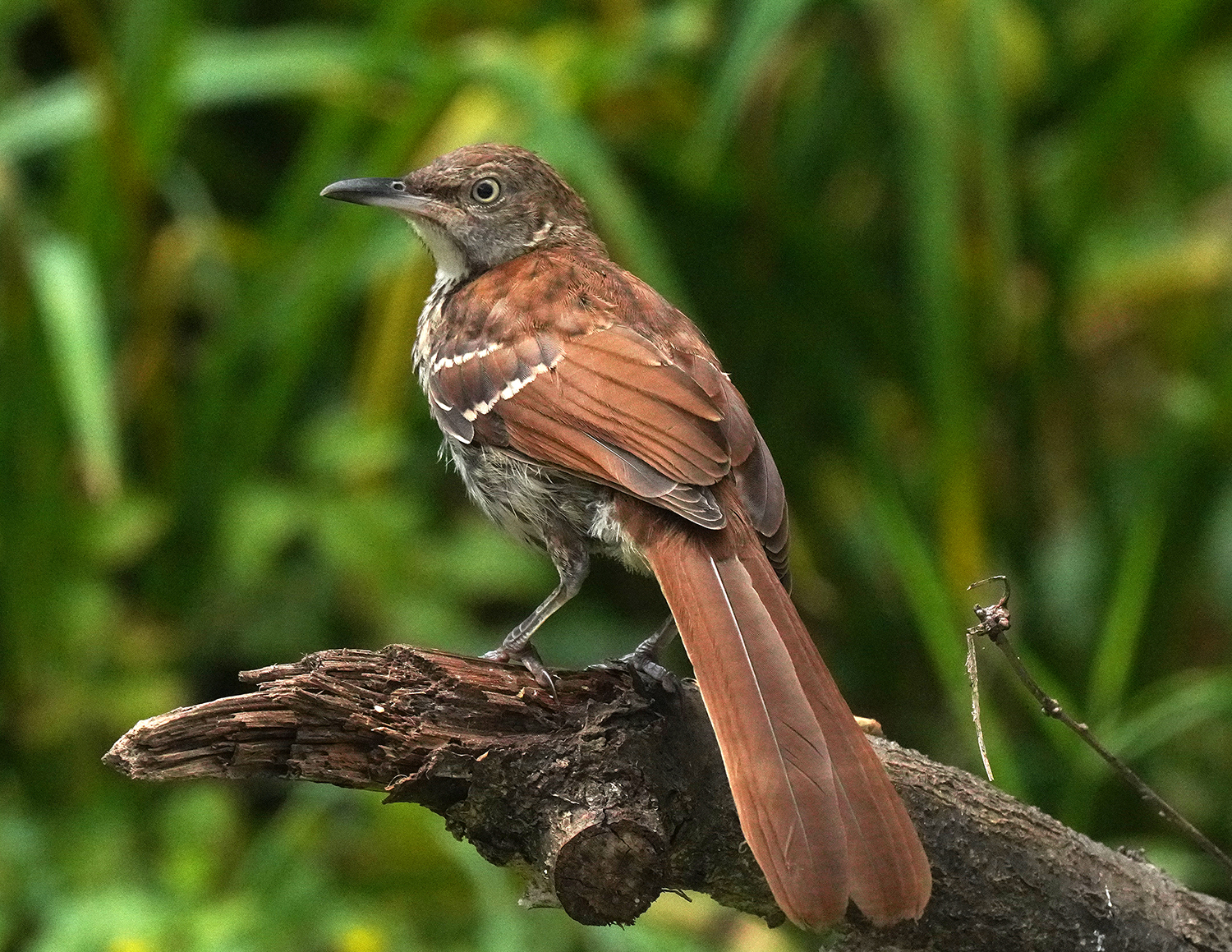 The European starling (Sturnus vulgaris) is actually quite attractive with its interesting pattern and iridescence. Starlings go for the suet more often than the feeders containing seeds. 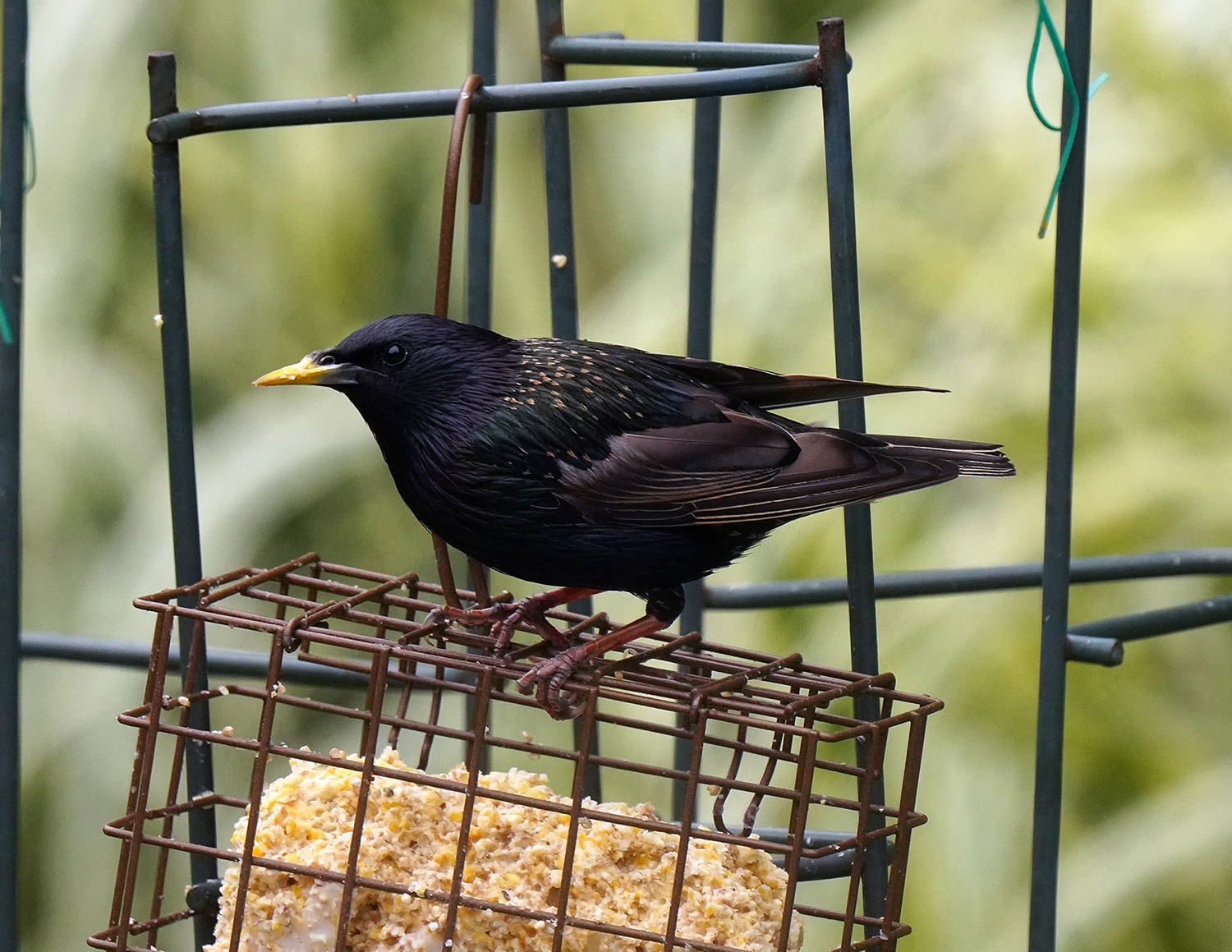