We continue with the Caturday felids, it being Caturday and all.

First, a video on the activities of cats during lockdown, although of course cats aren’t formally locked down. We see that they make biscuits, and one has the appropriate reaction to broccoli.  The longhaired black cat loves to knock things on the floor: a typical cat behavior that I don’t fully understand.

Another great animal film by ZeFrank, this time about the “killer senses” of cats. He pronounces “Felidae” wrong at the very beginning. Besides that, there’s some good video here, and some true biology, despite the Marvel Comics commercial near the beginning. Be sure to watch the “flehmen response” at about 7:10, and the discussion of the tongue papillae (about which I’ve written before) shortly thereafter.

Note to ZeFrank: you’re pronouncing a lot of biology terms incorrectly. I’ll be glad to vet them for you!

From People Magazine (click on screenshot), we have the story of a “split faced cat” with a face that’s half gray and half black. Now this could be caused by X-chromosome inactivation on different sides of the head, but since Namia is a male, that can’t be the explanation (he’s not XX but XY). The other explanation is that Namia is a chimera, resulting from the fusion of two embryos into a single embryo, with the embryo’s coat-color genes differing. Genetic tests show that isn’t the case, either, so what causes Namia’s splitting is a mystery. 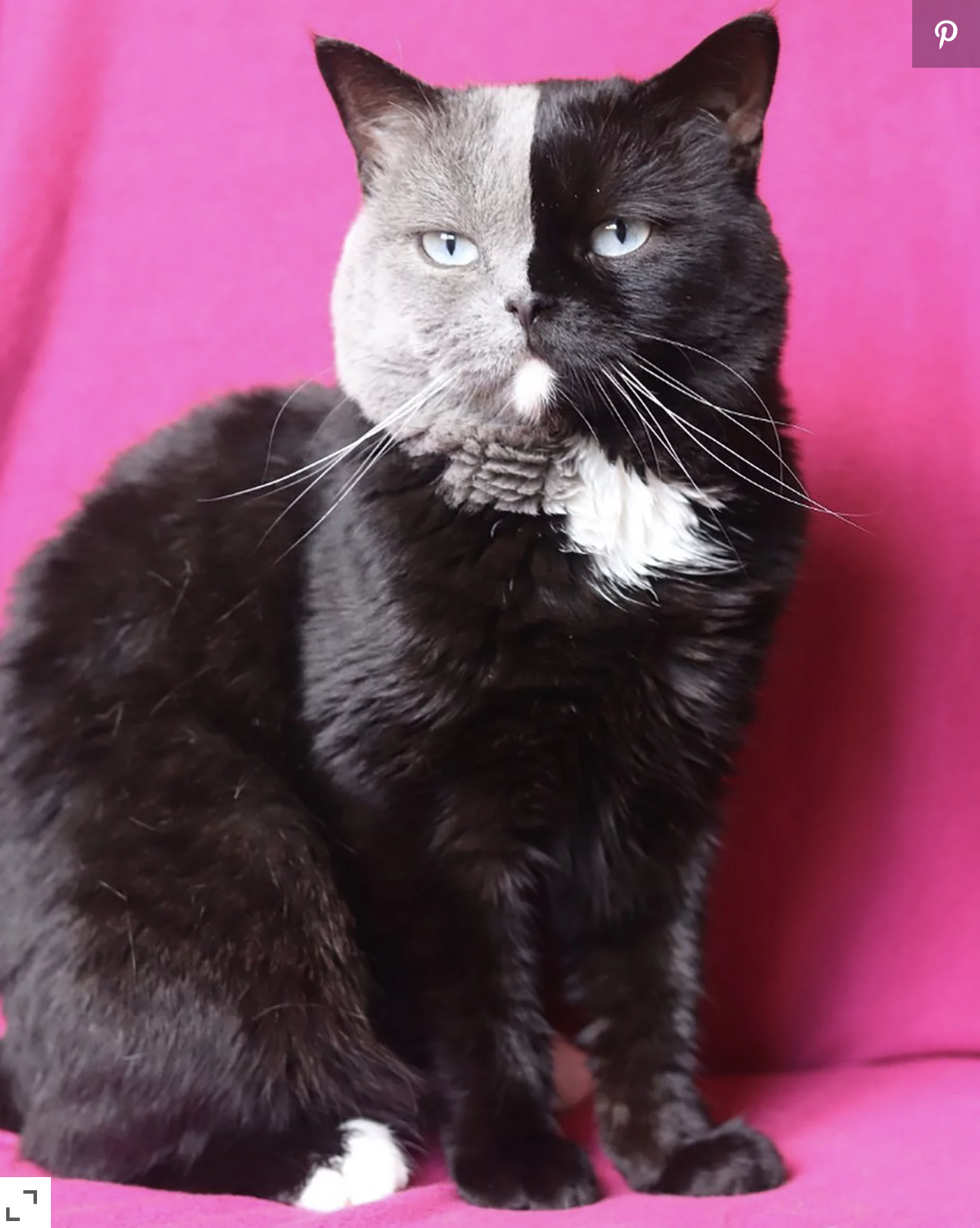 But, as people reports, he’s produced a kitten for each side (surely there are more kittens in the brood, the mother’s phenotype isn’t given, and this could be purely a coincidence having nothing to do with the “split face” condition. Still, it makes for a good story:

While what caused Narnia’s handsome face fur is unknown, he is passing a little of it down to his kids. The 3-year-old feline recently fathered two kittens, one for each side of his face. Prada is all-black except for a little white her chin, and her twin brother Phoenix is all-grey. Together, the two kittens have Narnia’s perfectly-divided face covered. Neither of the cats got Narnia’s blue eyes, both have entrancing brown eyes instead.

After spending the past few months with dad, both kittens are on their way to new homes, but they always carry a bit of their dad with them. 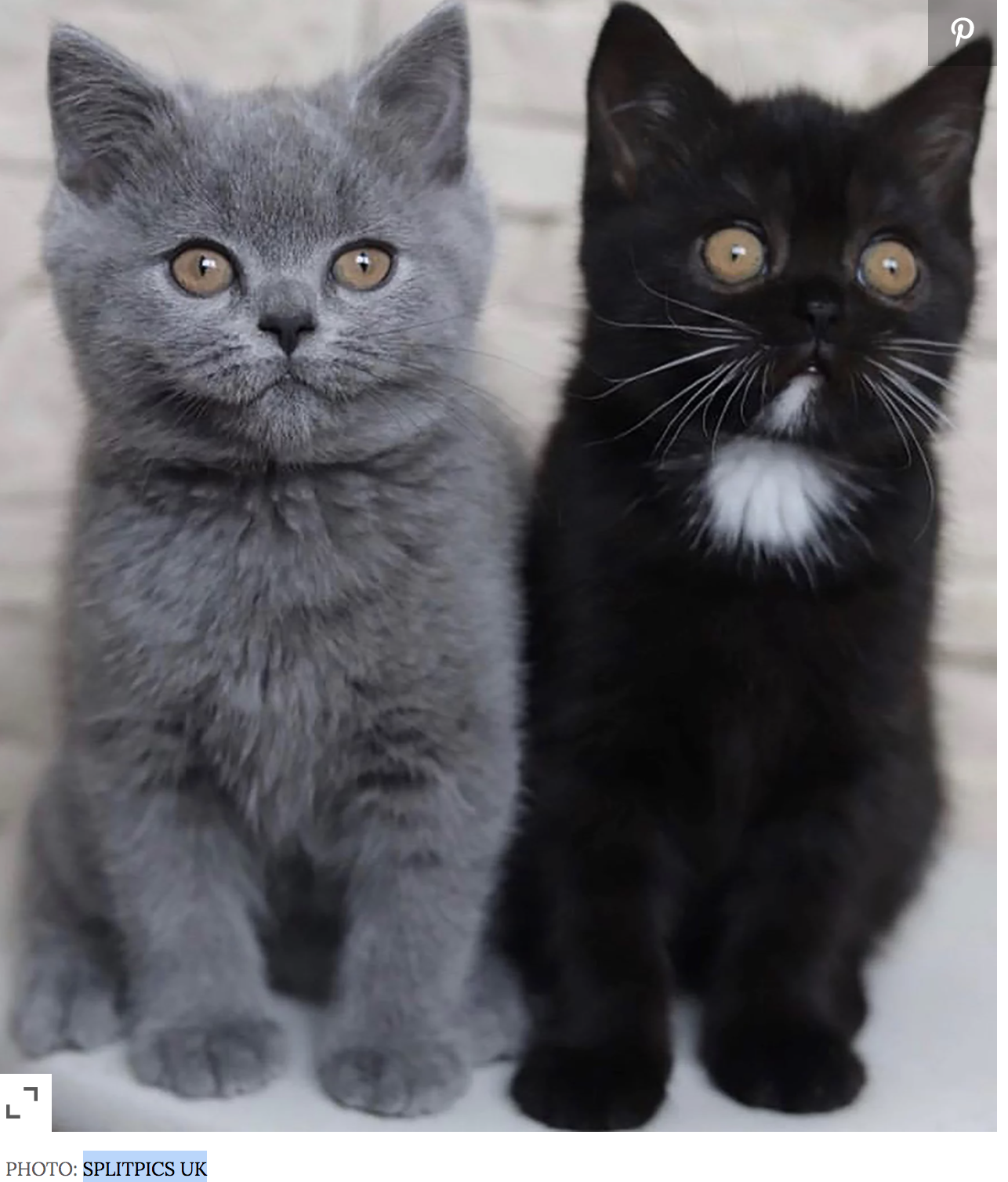 Sad Lagniappe. If you saw the movie or read the book about “A Street Cat Named Bob“, you’ll be saddened to hear that Bob passed away at the age of 14.  Bob was famous for first saving the life of his drug-addicted owner James Bowen, and ;then being the subject of a book and a surprisingly good movie (I’d recommend it highly, especially if you like cats). And Bob is gone too soon!

Click on the screenshot to read the news from Forreadingaddicts.co:

Inspired by his relationship with Bob, Bowen wrote the book A Street Cat Named Bob, which became a smash hit in 2013, selling over 1 million copies in the UK alone, spending 76 weeks at the top of The Sunday Times bestseller list and being translated into 30 different languages. The book was later adapted in a film and was released in 2016 to a strong response from critics. Bowen went on to publish several more books based on Bob, including Where in the World is Bob and The Little Book of Bob.

In statement published on Bob’s official Facebook page, it was announced that the cat has passed away at the age of 14. The post reads: “Bob saved my life. It’s as simple as that. He gave me so much more than companionship. With him at my side, I found a direction and purpose that I’d been missing. The success we achieved together through our books and films was miraculous. He’s met thousands of people, touched millions of lives. There’s never been a cat like him. And never will again. I feel like the light has gone out in my life. I will never forget him.”

As The Guardian reports, Editor of The Big Issue, Paul McNamee said: “First Bob changed James Bowen’s life, then he changed the world. He meant a great deal to The Big Issue and was a huge part of our story, as The Big Issue was to his story.

“Over the years we’ve reported on his successes and each time we put him on the cover our vendors were delighted. They knew it meant fans would flock to purchase. He represented a second chance and hope and never giving up on somebody, things that are hardwired into The Big Issue DNA.

“Our condolences go to James, Bob’s loyal companion. Bob saved his life and he’s spoken of the success the pair enjoyed through their books and films as being miraculous. He said there’s never been a cat like him. We couldn’t agree more.”

8 thoughts on “Caturday felid trifecta: What cats do during lockdown; ZeFrank on the senses of cats; split-faced cat fathers two kittens, one for each side of the face (and lagniappe)”