This week’s Jesus and Mo strip, called scheme, has the three boys in a car (Moses has joined them so the Abrahamic Brothers can quarantine together).  Mo has apologized to Jesus for doubting he was Jewish (see last week’s strip), but then makes matters worse by drawing a distinction between conspiratorial Jews and Rothschild Zionists.

The strip also came with a note: “If you haven’t heard of David Icke, you’re lucky. We’ll take a rest from antisemitism next week.” I had heard of Icke, and he’s worst sort of anti-Semite: a conspiracy theorist who thinks that Jews are alien, lizard-like beings. (He used to be a sports broadcaster). Here’s a precis of Icke’s views from Wikipedia:

Icke believes that the universe is made up of “vibrational” energy and consists of an infinite number of dimensions that share the same space. He claims that an inter-dimensional race of reptilian beings called the Archons (or Anunnaki) have hijacked the earth, and that a genetically modified human–Archon hybrid race of shape-shifting reptilians known as the Babylonian Brotherhood, the Illuminati, or the “elite“, manipulate global events to help keep humans in constant fear. Thus, the Archons can feed off the “negative energy” this creates.

The “shape-shifting reptilians” are clearly supposed to be Jews. So it goes. 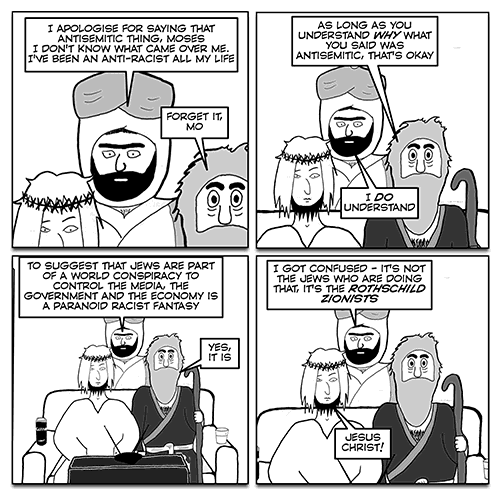