Only twice before have I actually gotten into Botany Pond: once to recover a dead duckling, and once to put bricks in the center circular “baths” to build them up so that ducklings could climb out of the shallow wells (the dead one had gotten trapped in there and drowned). The pond is cold, slimy, and grubby:  the bottom is deep mud and not cement. It’s not something I’d want to do again.

Well, I did—this morning, and inadvertently. The reason was that I was eager to photograph the last improvement that Facilities made to the pond before Jump Day (probably this weekend).

After I asked Kevin Austin, Director of Building Services, to soften the top of the small fence designed to keep people off the north end of the Erman Hall landing strip, he assigned his team, headed by Barry O’Quinn, to put some rubber padding on the fence lest ducklings be injured if they jumped and fell on it. (O’Quinn’s team also built the awesome mulch-containing trampoline under Honey’s nest as well as padding the entire area).

I went down to photograph the job, and you can see the rubber-topped fence below. I was pleased. You can also see the bubble-wrapped metal pylon that’s been padded in case a duckling lands on it, as well as the thick layer of mulch that extends to the pond edge This area is directly under Dorothy’s nest. 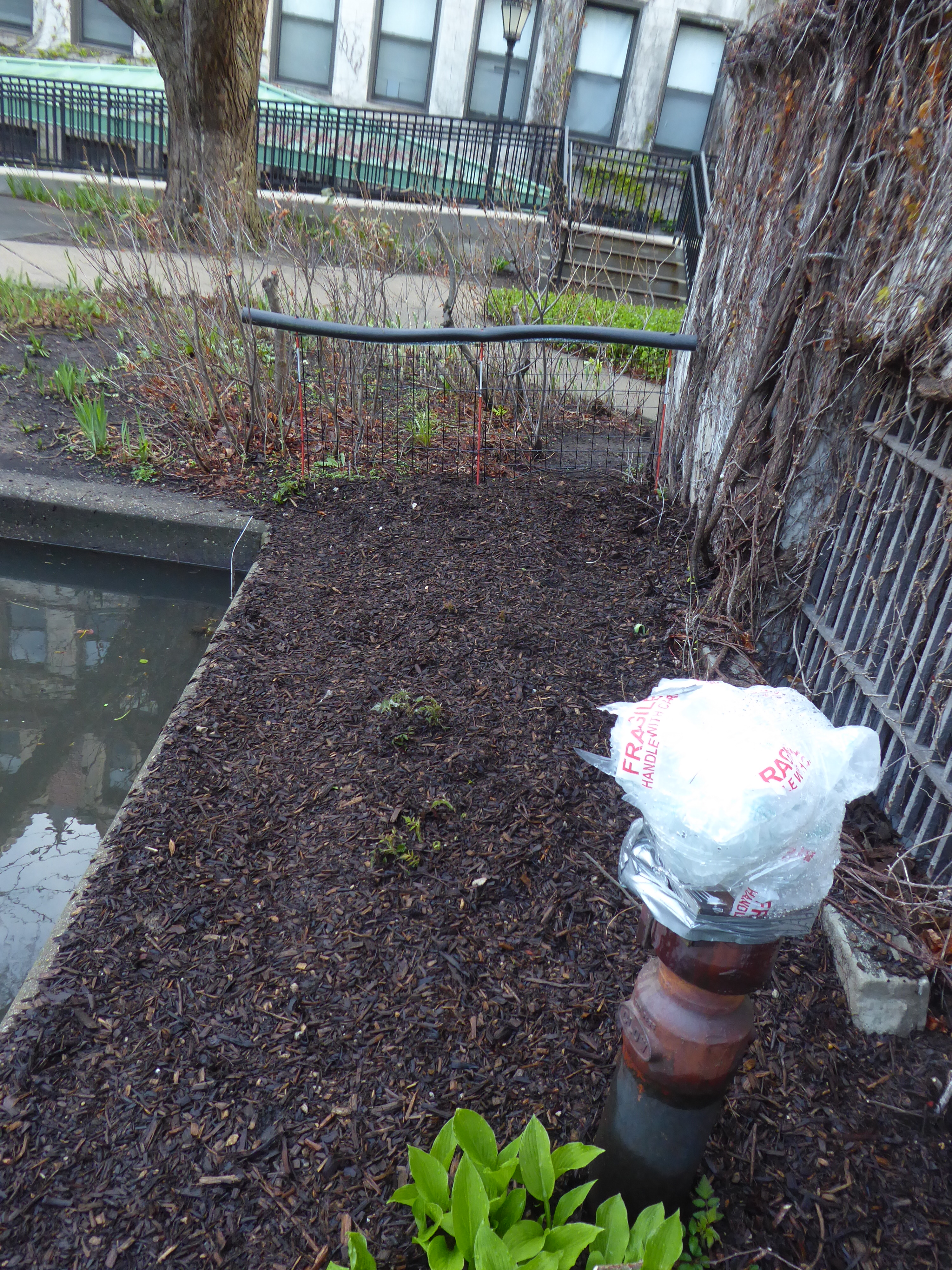 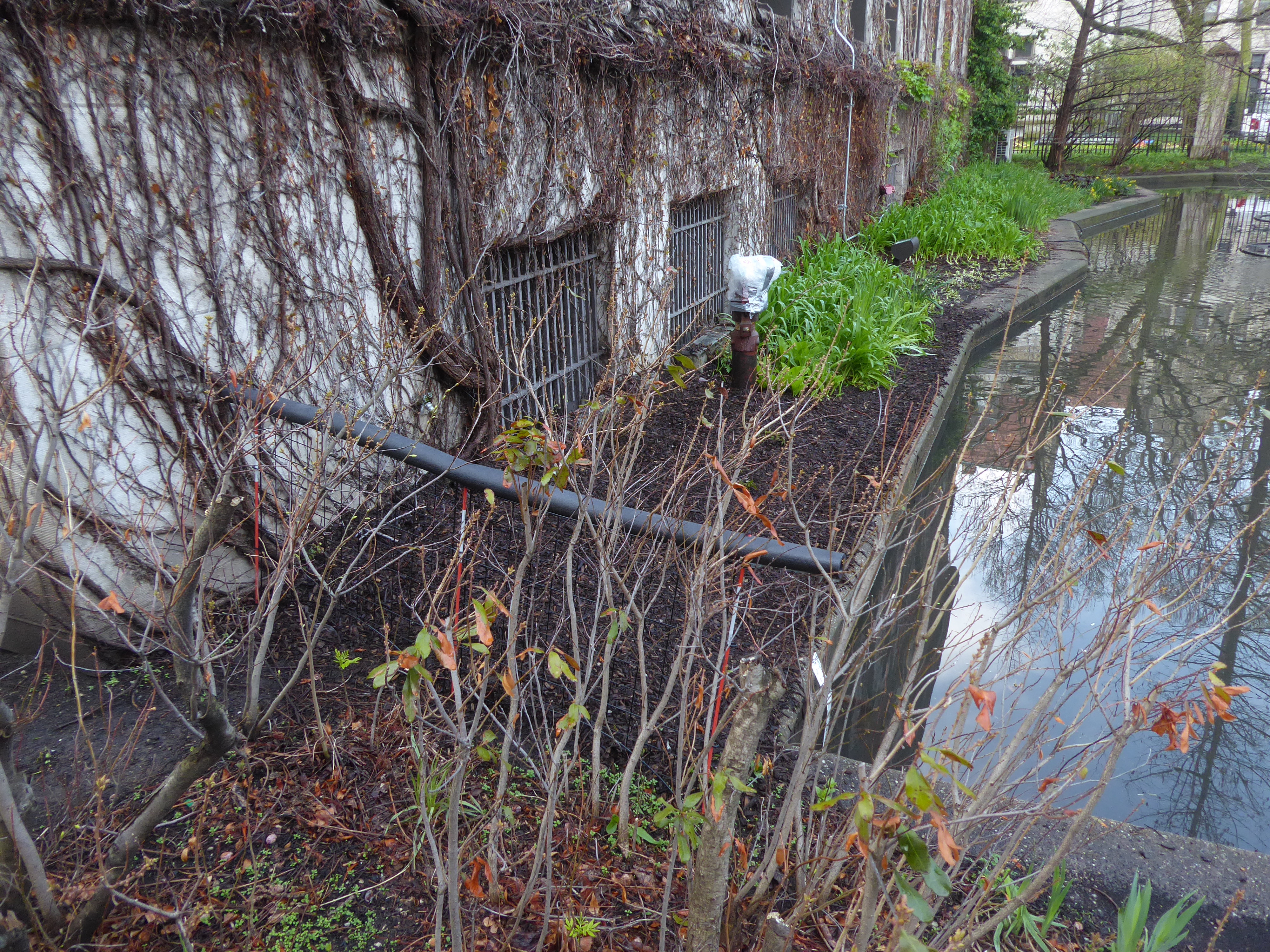 This area is supposed to be off limits to everyone, but I have a certain latitude to enter occasionally to make sure things are okay. When I was exiting around the pond side of the fence, where there’s a narrow egress, I slipped on the mulch and fell into the pond up to my thighs, drenching my jeans (but not my phone, thank Ceiling Cat) and of course filling my shoes with slimy mud. I had the presence of mind to toss my camera onto the dirt as I fell, but it landed on the cement. It’s badly dinged and doesn’t work so well. Fortunately, I have a spare.

My jeans are drying now, soaked to the zipper and muddy: 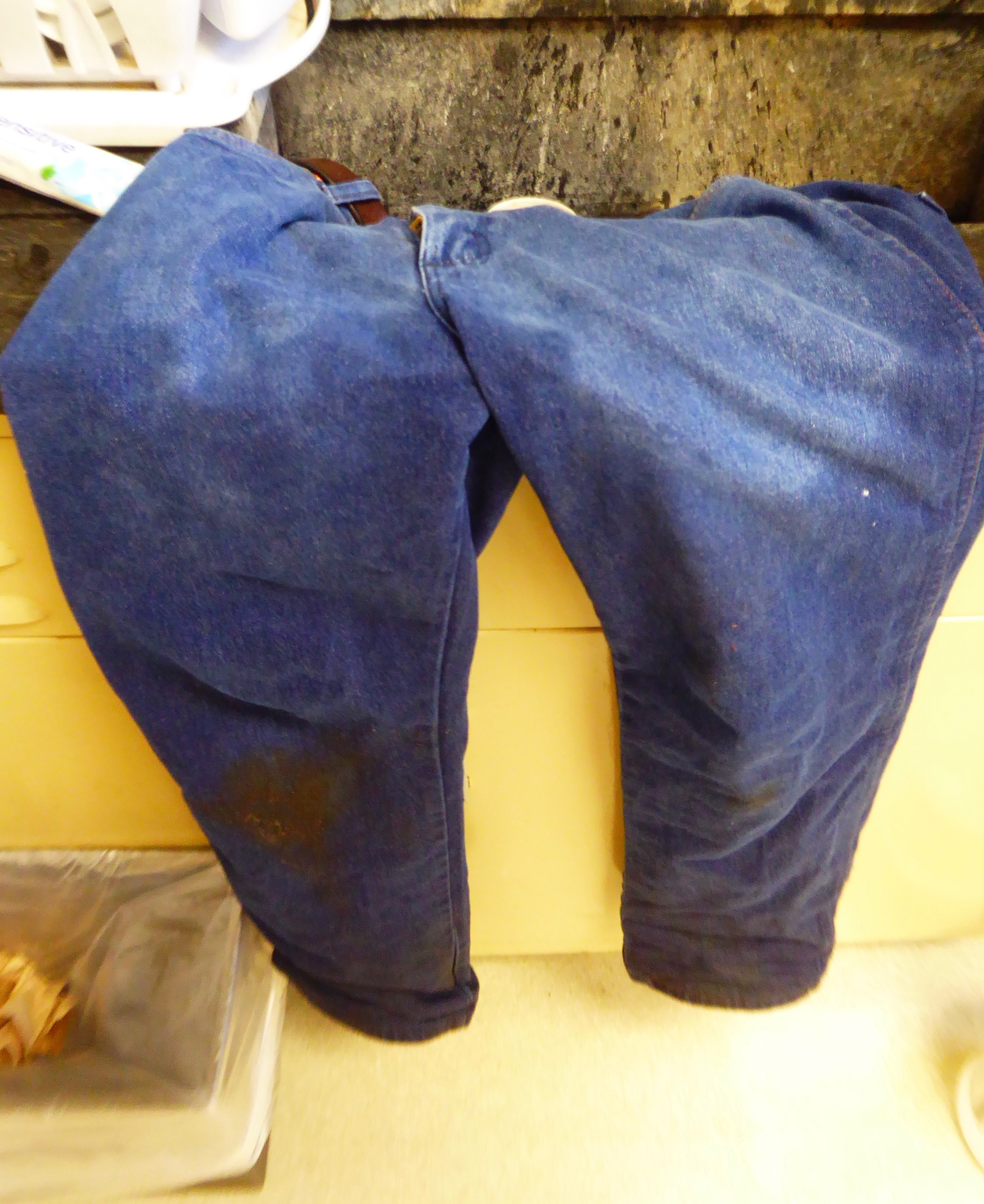 And I’m a bit scraped up below the knee. I washed it and put 70% ethanol on it (what I use to disinfect, OW!).

If you’re a visitor to the pond, and reading this, THIS is why you should not go beyond the fences (we’re having “do not disturb the ducks and ducklings” sign put on each of the three fences this week). Enjoy the ducks, but do not feed them, chase them or bother them. Ducklings need to get out of the water and dry off once a day, and chasing them back into the water is really bad for them.  If you have a dog, keep it leashed and do not let it go after the ducks—and BY NO MEANS let it go into the water! (This happened last year.) I am told that someone falls into the pond about once a year, and I hope I am this year’s allotment. 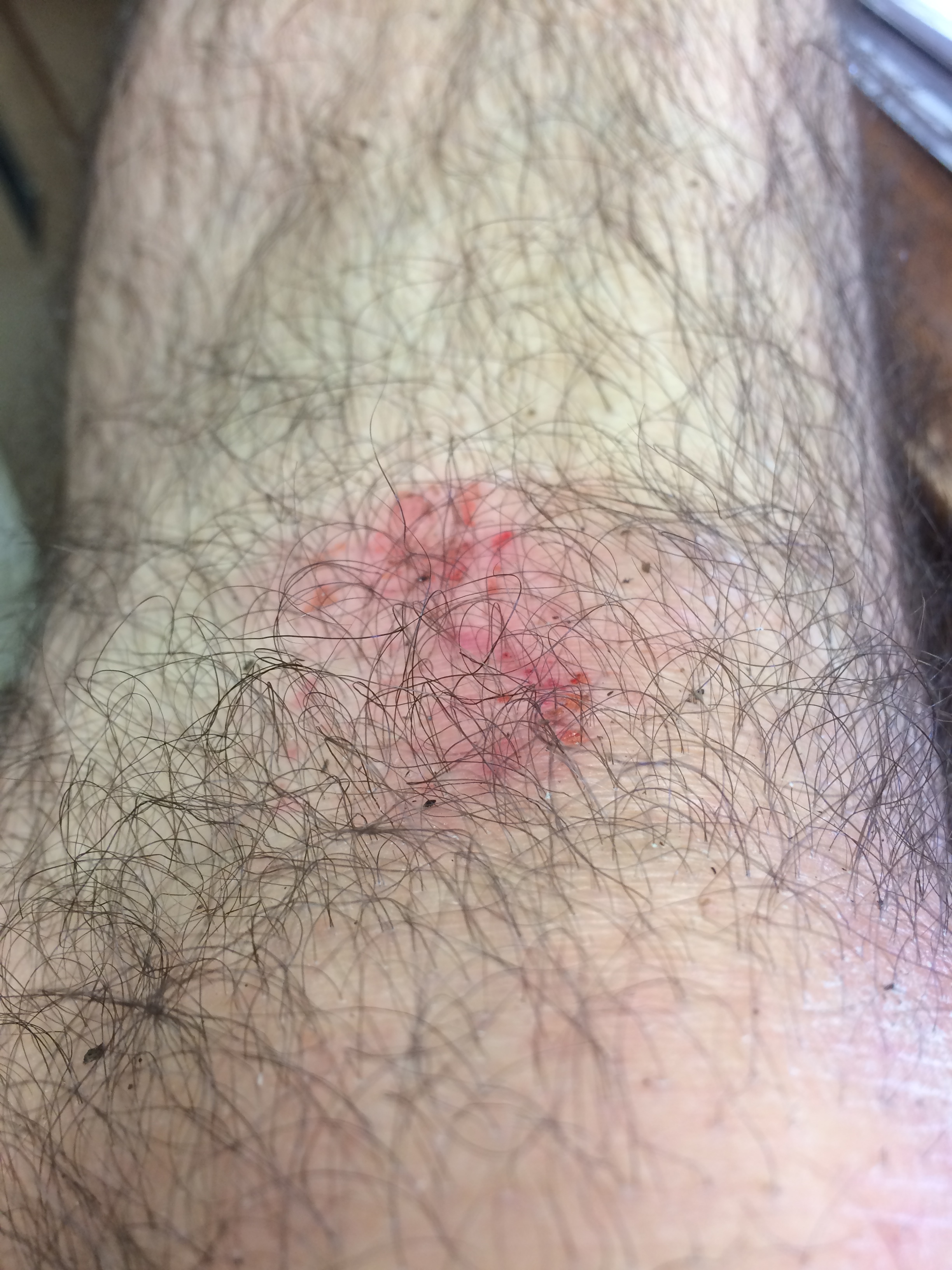 But I’m fine, and it’s all in the service of my beloved ducks. Indeed, I’ve been baptized in duck water! 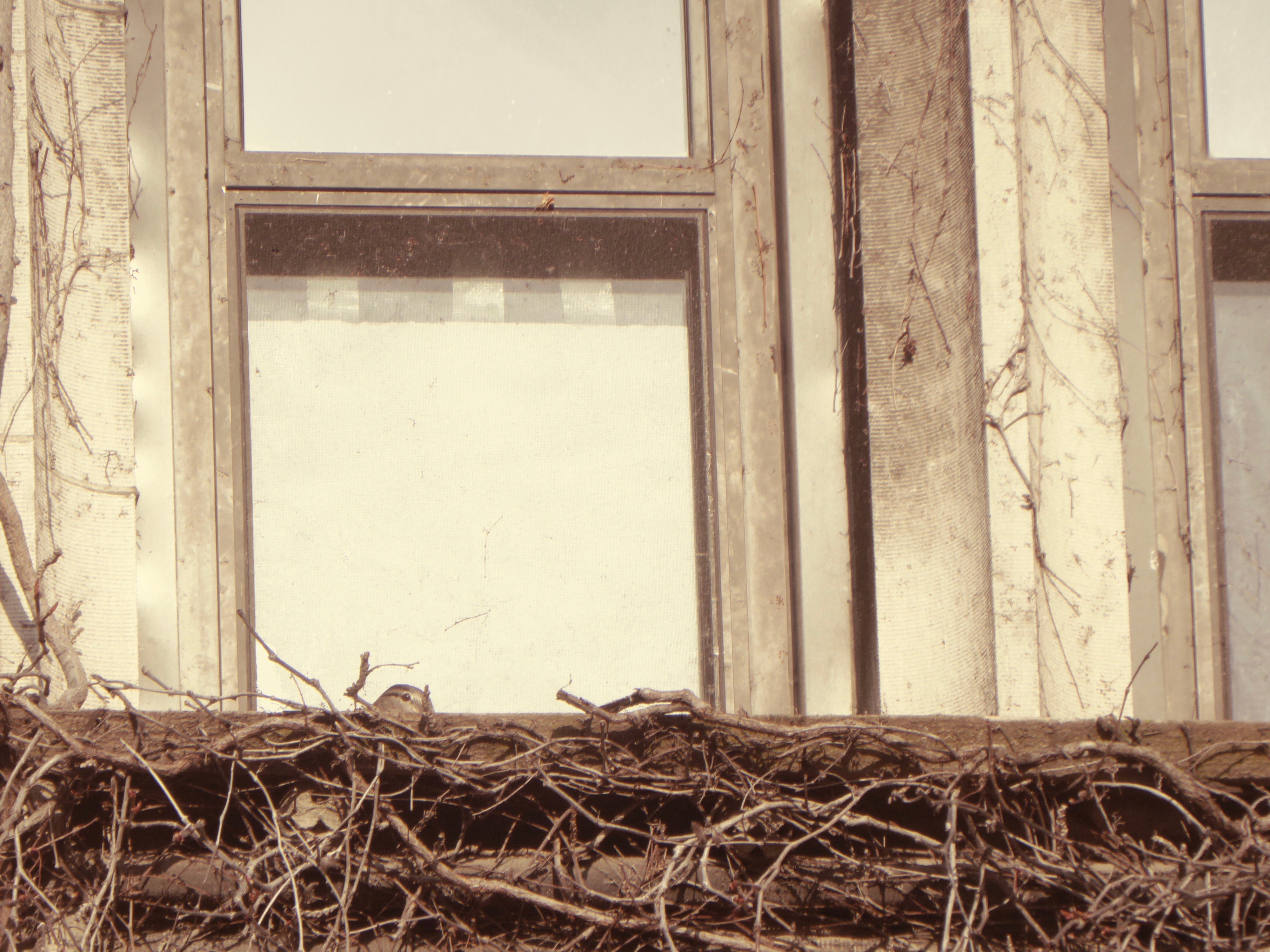 33 thoughts on “In which I fall into the pond”