Since mallards typically incubate their eggs for 28 days, and Honey and Dorothy started sitting hard on their nests on April 5 or 6, I estimate that the ducklings will hatch and then jump from the window ledges about May 3 or 4. I asked Facilities to work with me to prepare the pond and nest areas for this event, and they’ve done their job in spades. (I called the event “The Great Leap Forward”, which it is.) Everything’s copacetic—and ready to go.

First, to provide some space below so I can display a large Google Earth view, here are two photos of Wingman from this morning. He doesn’t yet know that in a week he’ll be a dad, but his instincts tell him to wait in the pond for his hens.

Here he’s just had a bath after his breakfast, so water is dripping from his bill: 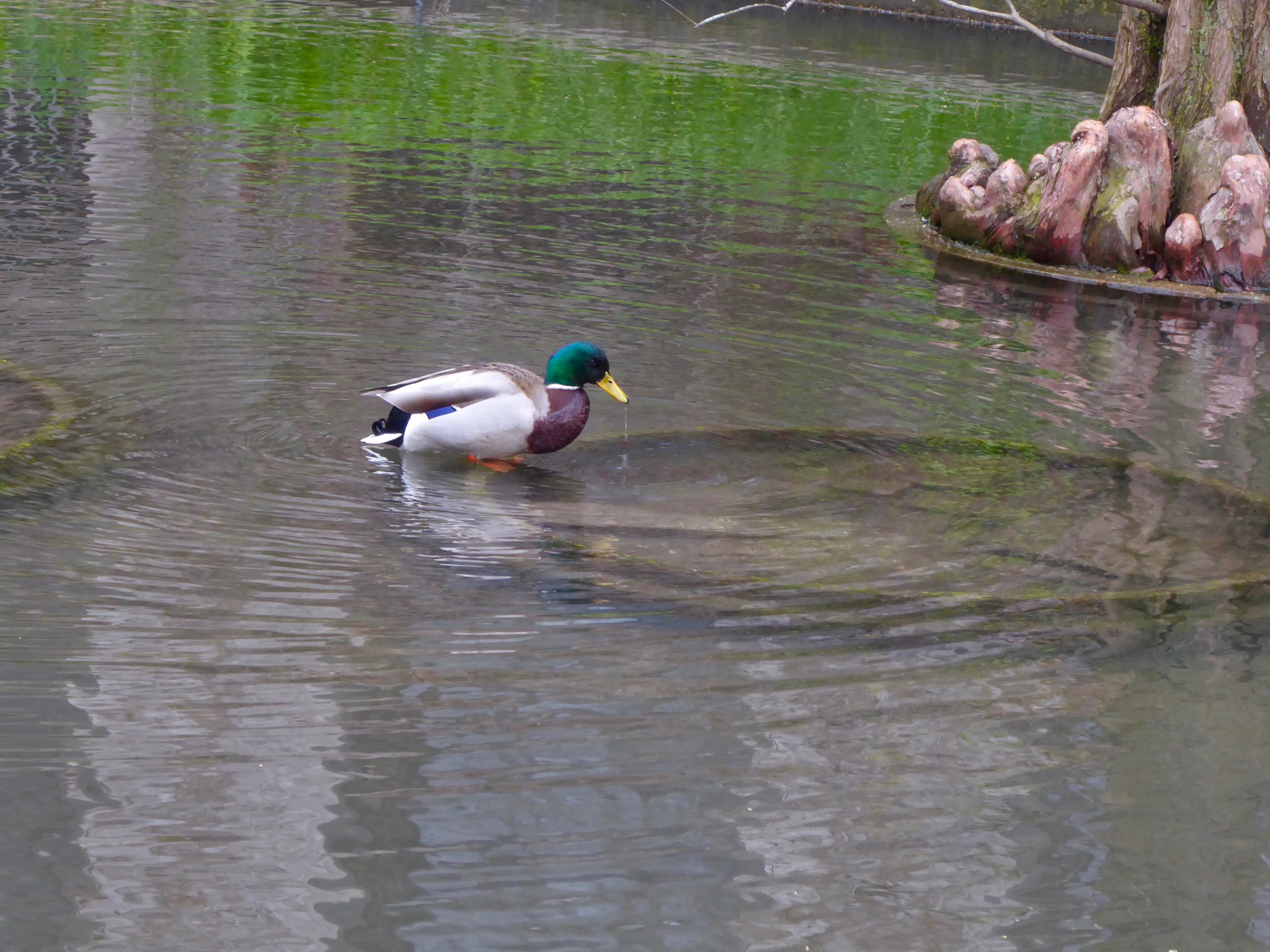 And an “artsy” picture of Wingie immersing himself: 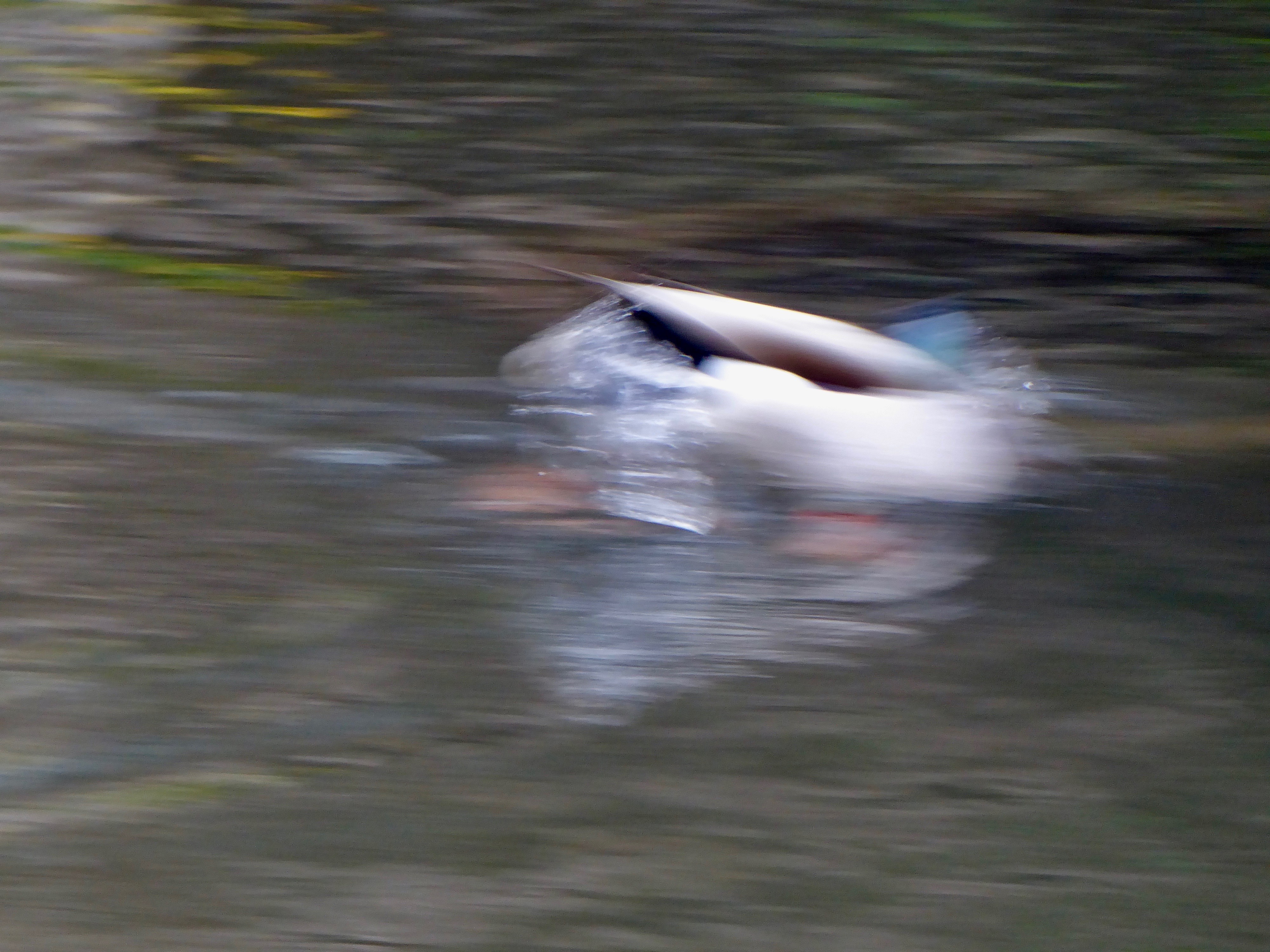 Here’s the overhead photo of Erman Hall and Botany Pond; I’ve inserted arrows and numbers to give the locations of items shown below. 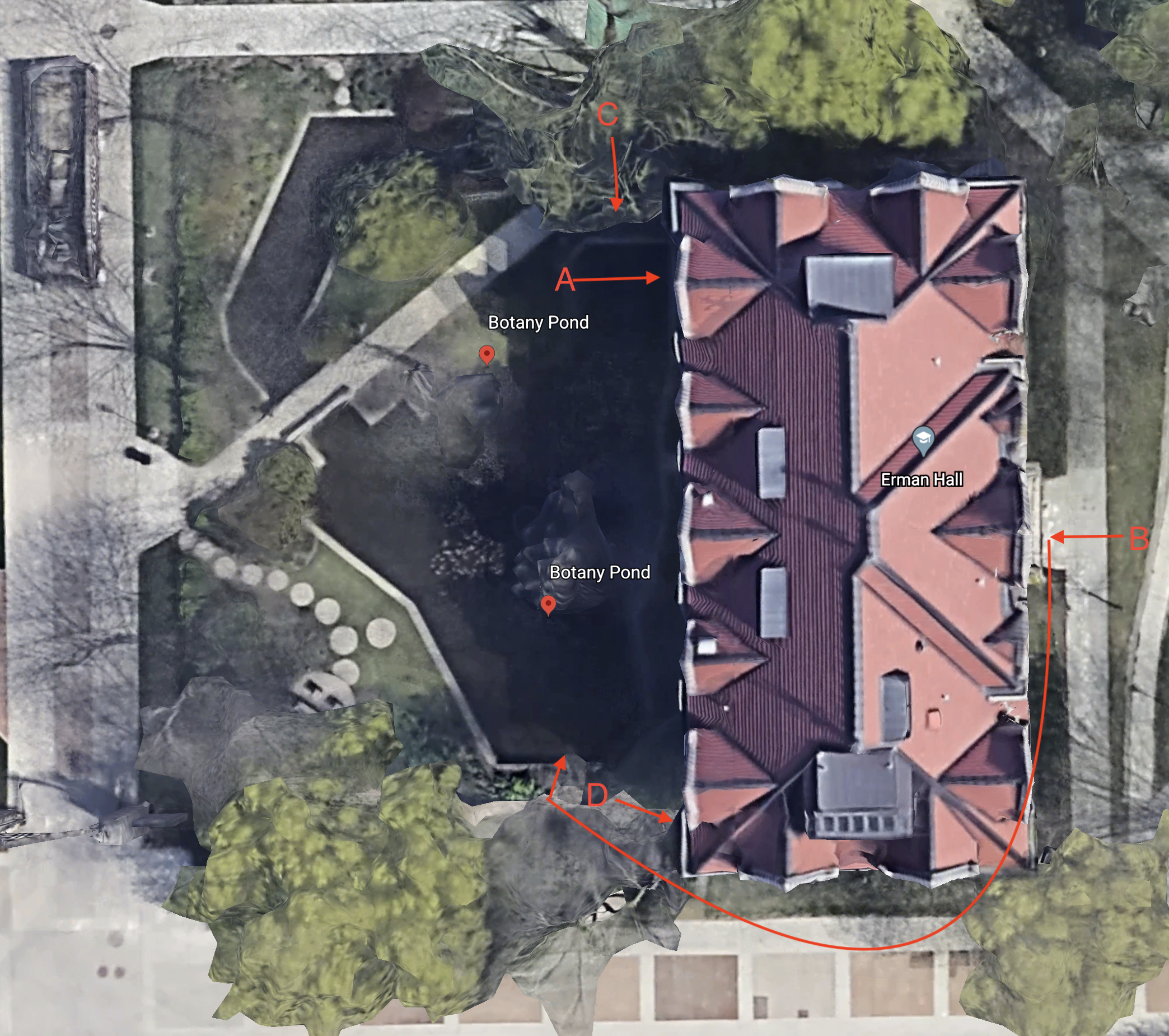 First, I asked Facilities to fence off the small strip of vegetation on the pond (west) side of Erman. “A” marks Dorothy’s nest on the third-floor ledge. Just below it Facilities has put a thick layer of mulch to cushion the ducklings’ leap. You can see the mulch in the photo below, which shows a fence a bit north of where the ducklings will land. That, in turn, will be about 20 feet north of where I’ll put the duckling ramp.

Here’s the fence. Note that there is a small opening on the left side of the fence that ducklings can pass through (I’ll remove the mulch there after they jump to make the opening larger.) The object is to keep people off that strip of land so they don’t pursue or otherwise bother the ducklings, who often hang out there, or try view the “duck islands” from too close, which could disturb mother and babies. 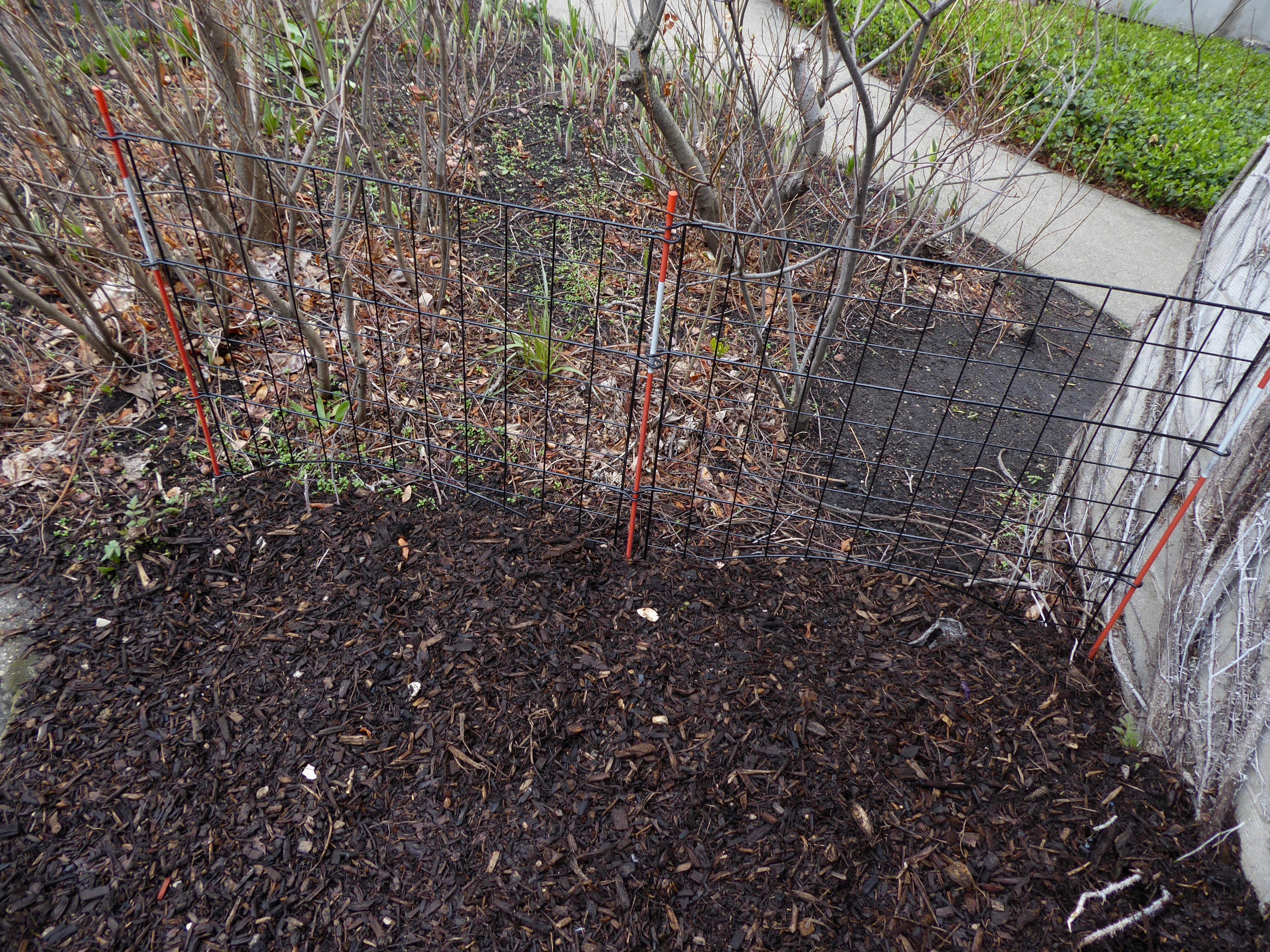 Right to the south of where the ducklings will leap, there’s a metal pylon. Facilities covered it with bubble wrap so they won’t land on it and hurt themselves, and I did a touchup with more bubble wrap and duct (duck?) tape: 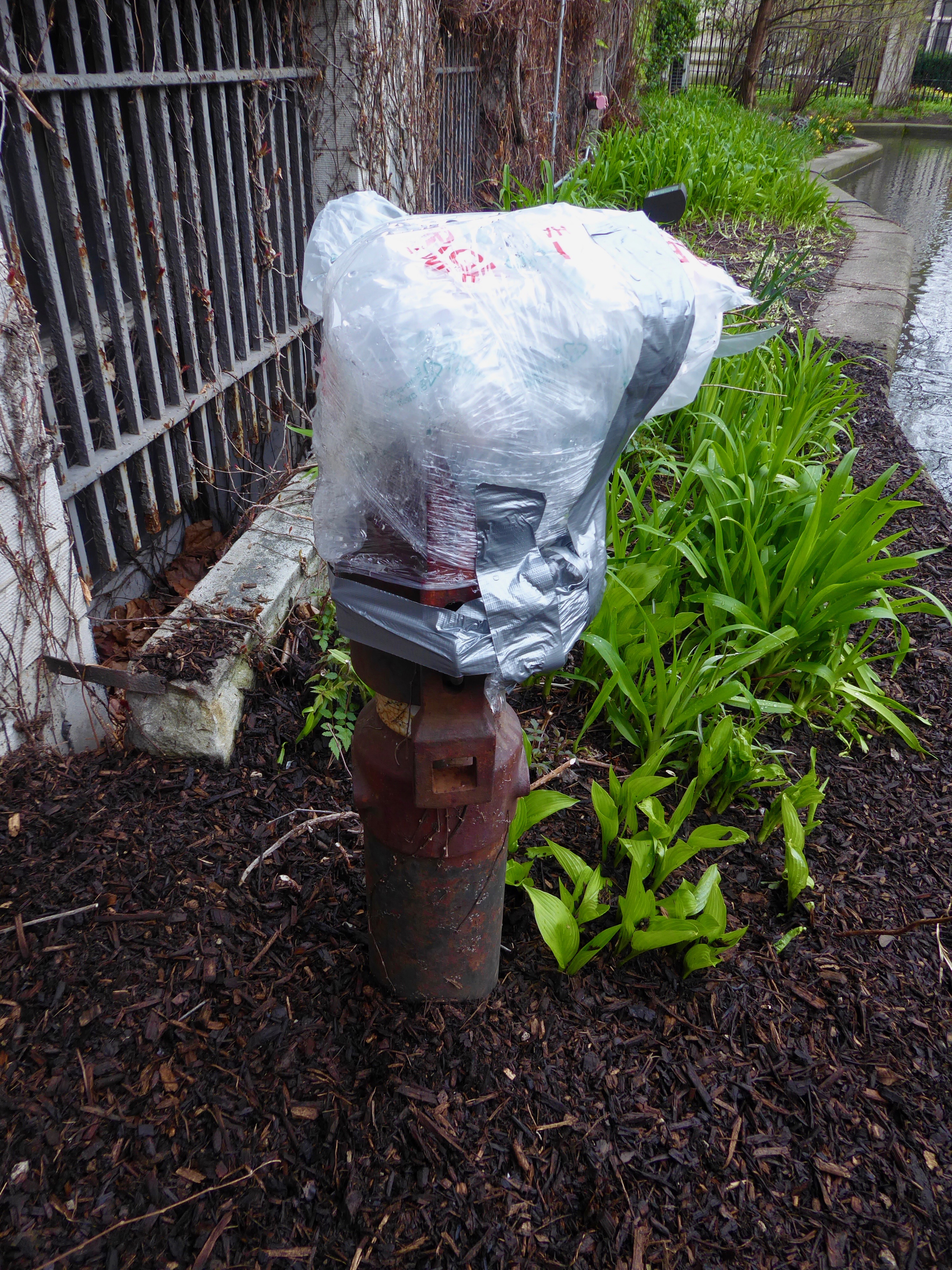 At “D” is the south fence to keep people from entering the strip in that direction. Note the duckling passage (arrow): 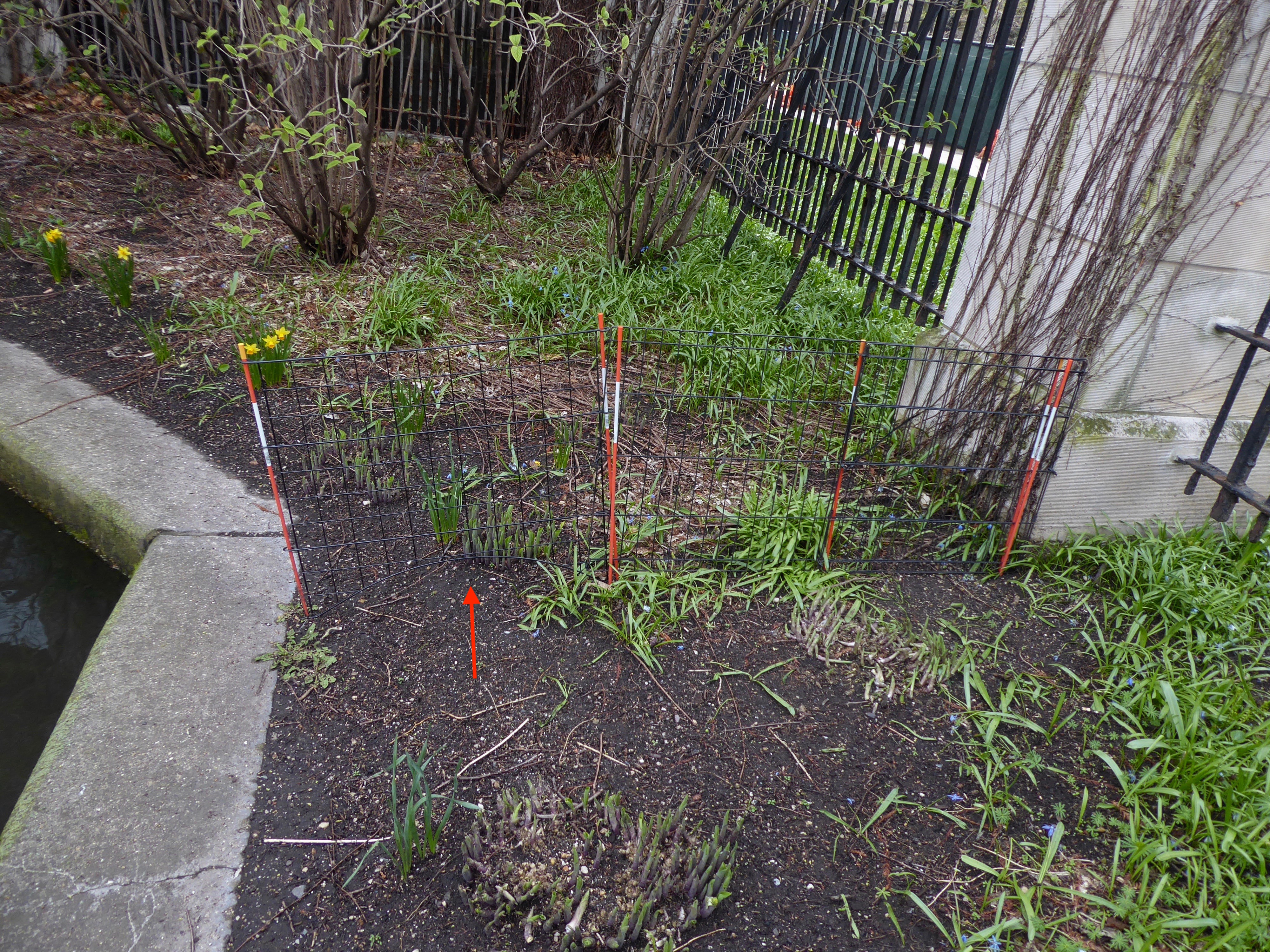 “C” marks the long fence that sequesters a strip of the bank so the ducklings can rest, forage, and sun themselves. You can see the fenced-off strip of land at the base of Erman hall, along with the mulch that Facilities laid down beneath Dorothy’s nest. You can also see the pylon topped with a bubble-wrapped shower cap. 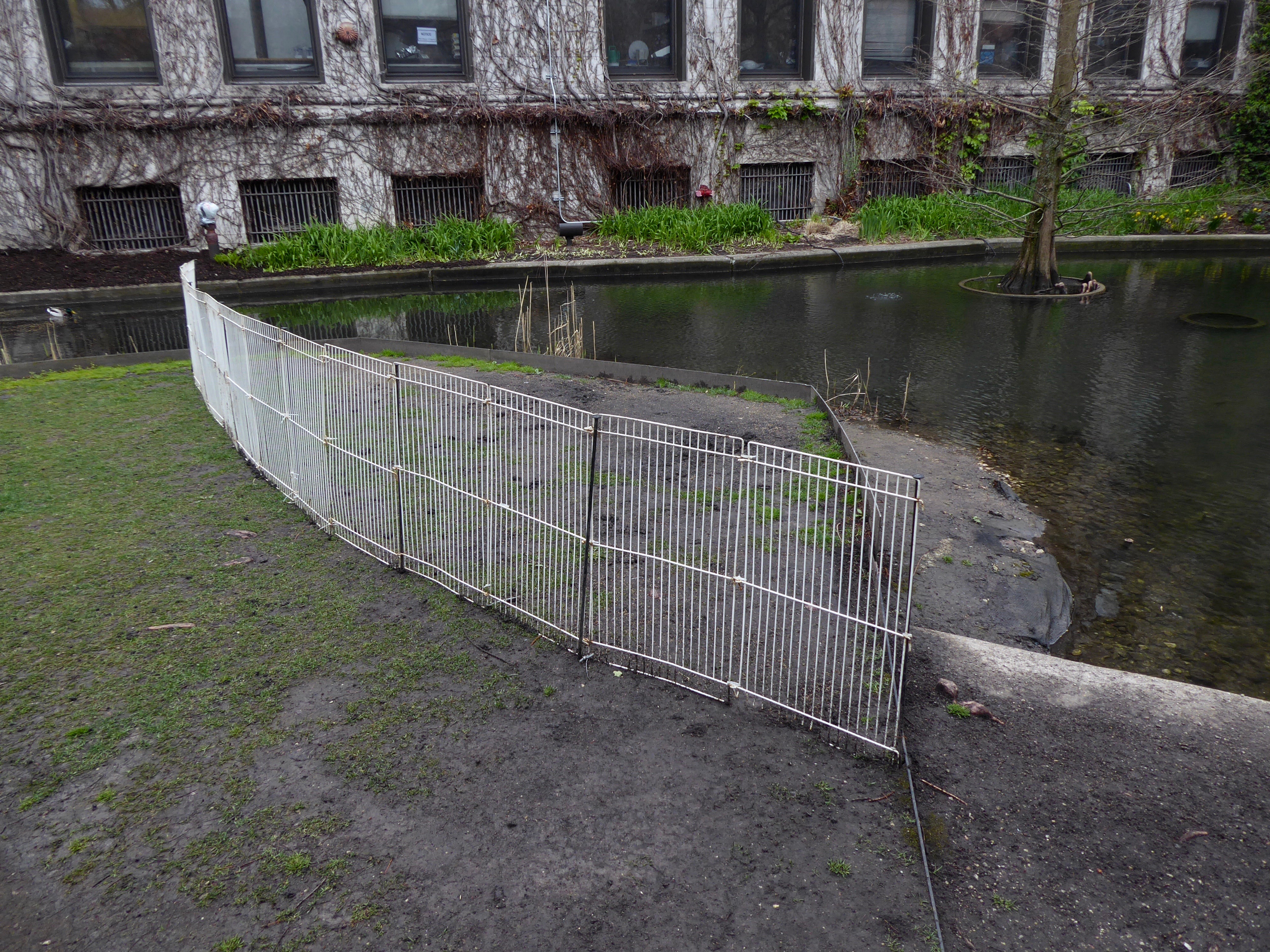 Honey’s nest is in the dangerous spot marked “B”, two stories above what was a cement porch outside doors on the east side of Erman. Landing on cement would not be something good for a leaping duckling. But in a magnificent piece of engineering, Facilities covered the porch with a thick layer of mulch and then built a mulch-containing trampoline to catch the ducklings. I asked them to cover the wooden edges of the trampoline with some soft substance to prevent harm to falling ducks, and they did that using rubber tubing.

Honey (you can see her little head) is in the circle, with the trampoline below. She is unaware and presumably unappreciative of the trouble it took to do this! 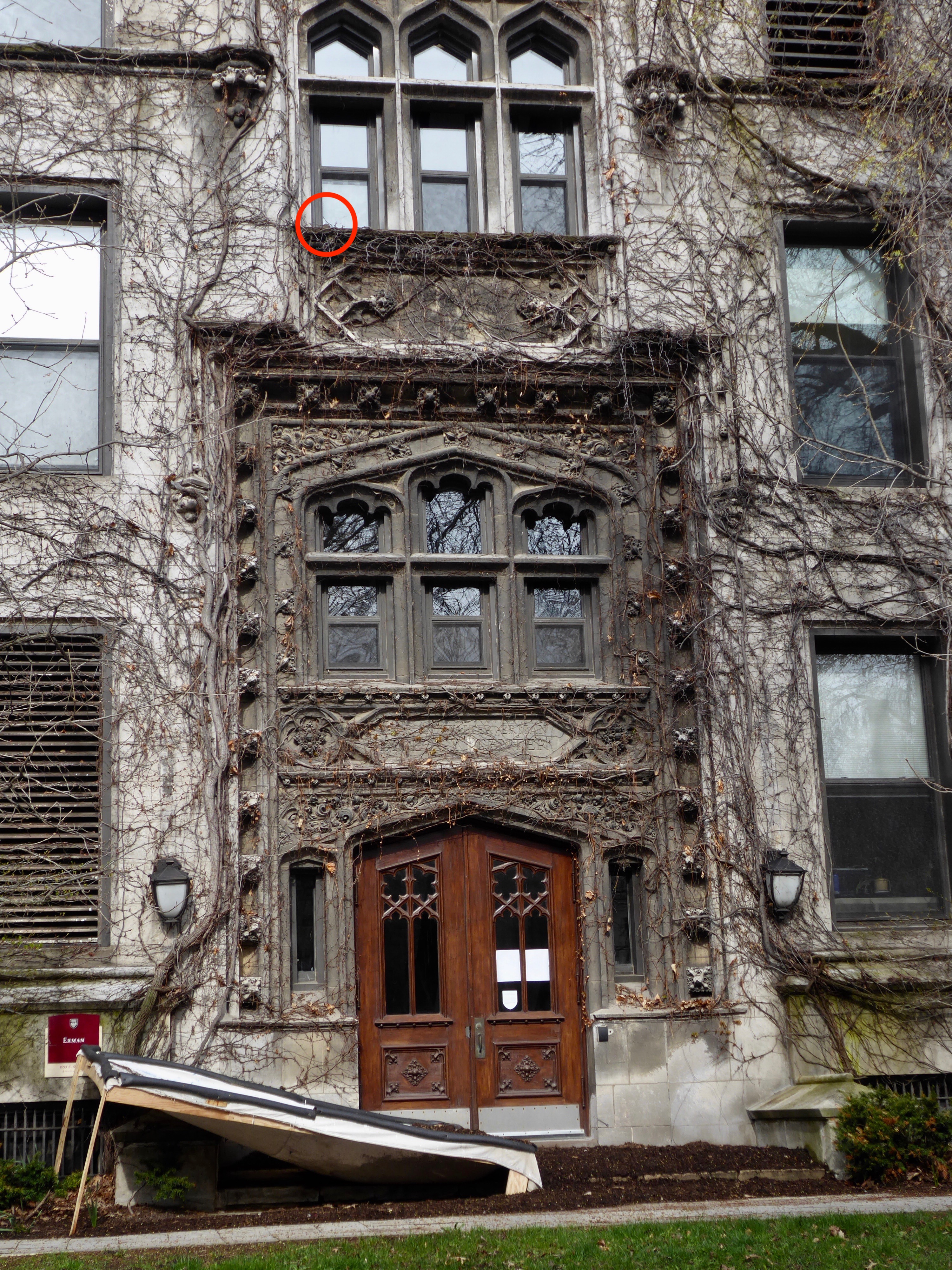 The white paper on the door are warning signs (see below): 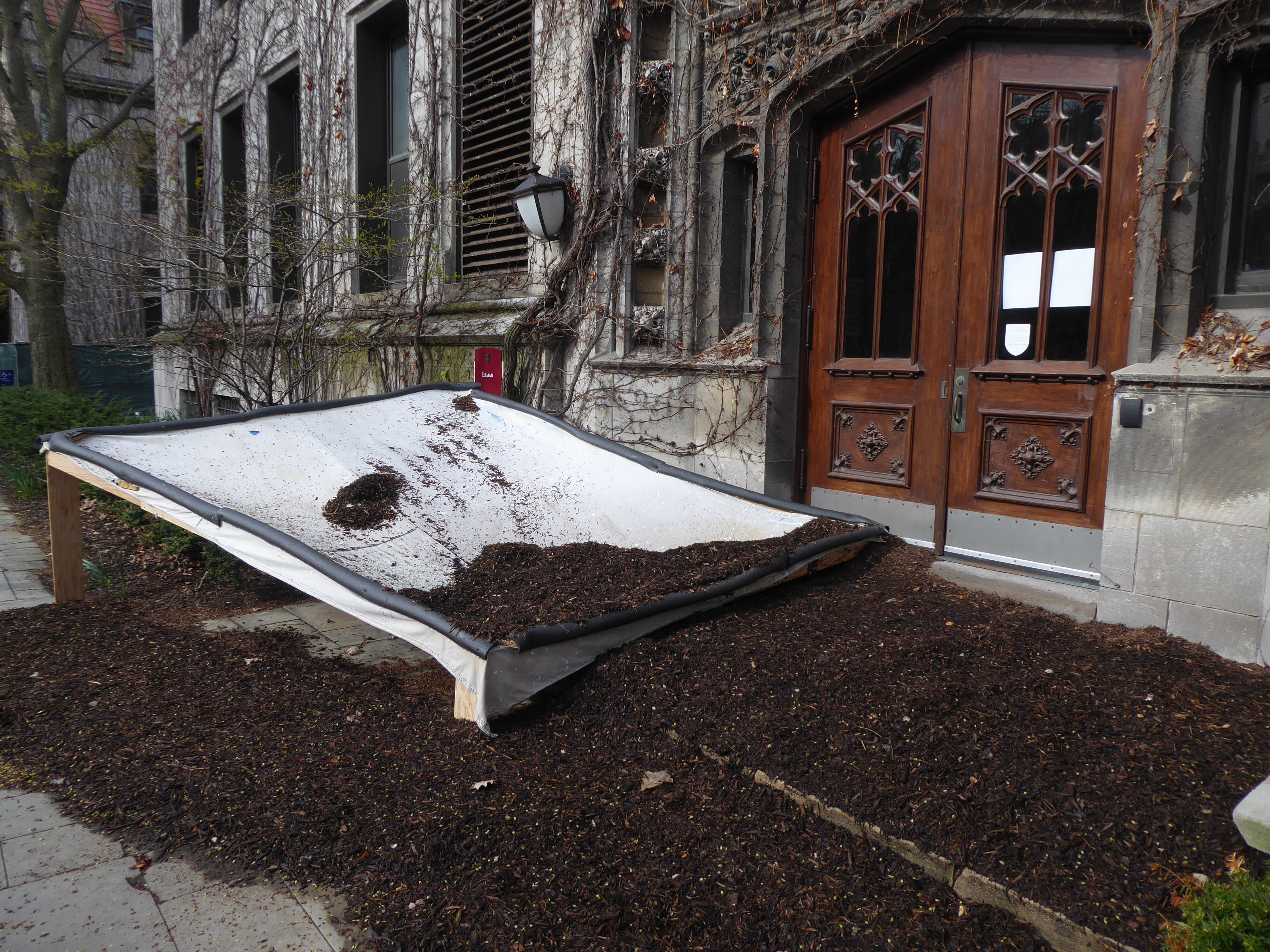 There’s enough “give” in the canvas so that the ducklings won’t bounce, and they’re too light to bounce anyway. 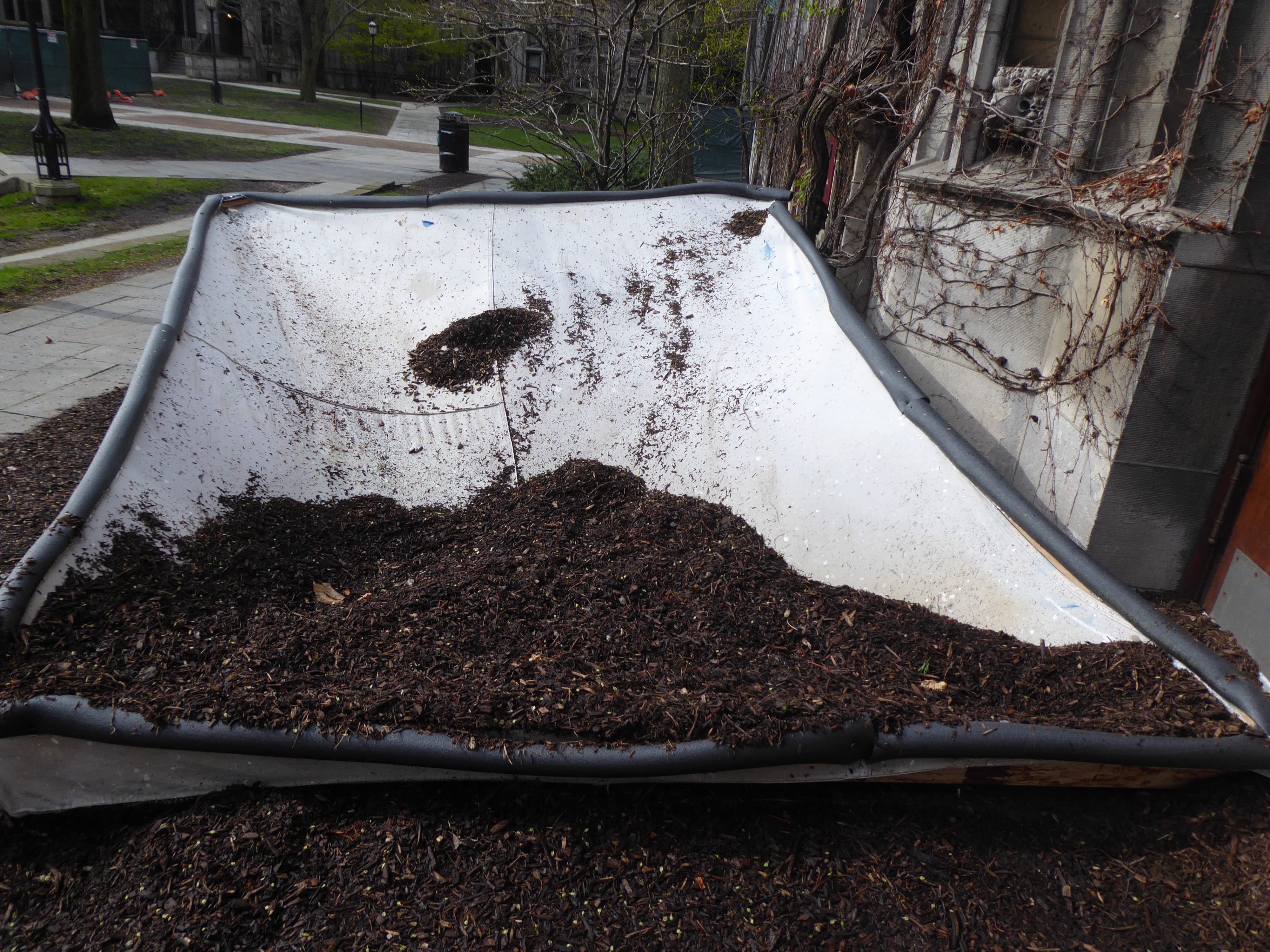 Here are the wonderful signs they put on the inside of the door, complete with a duckling picture: 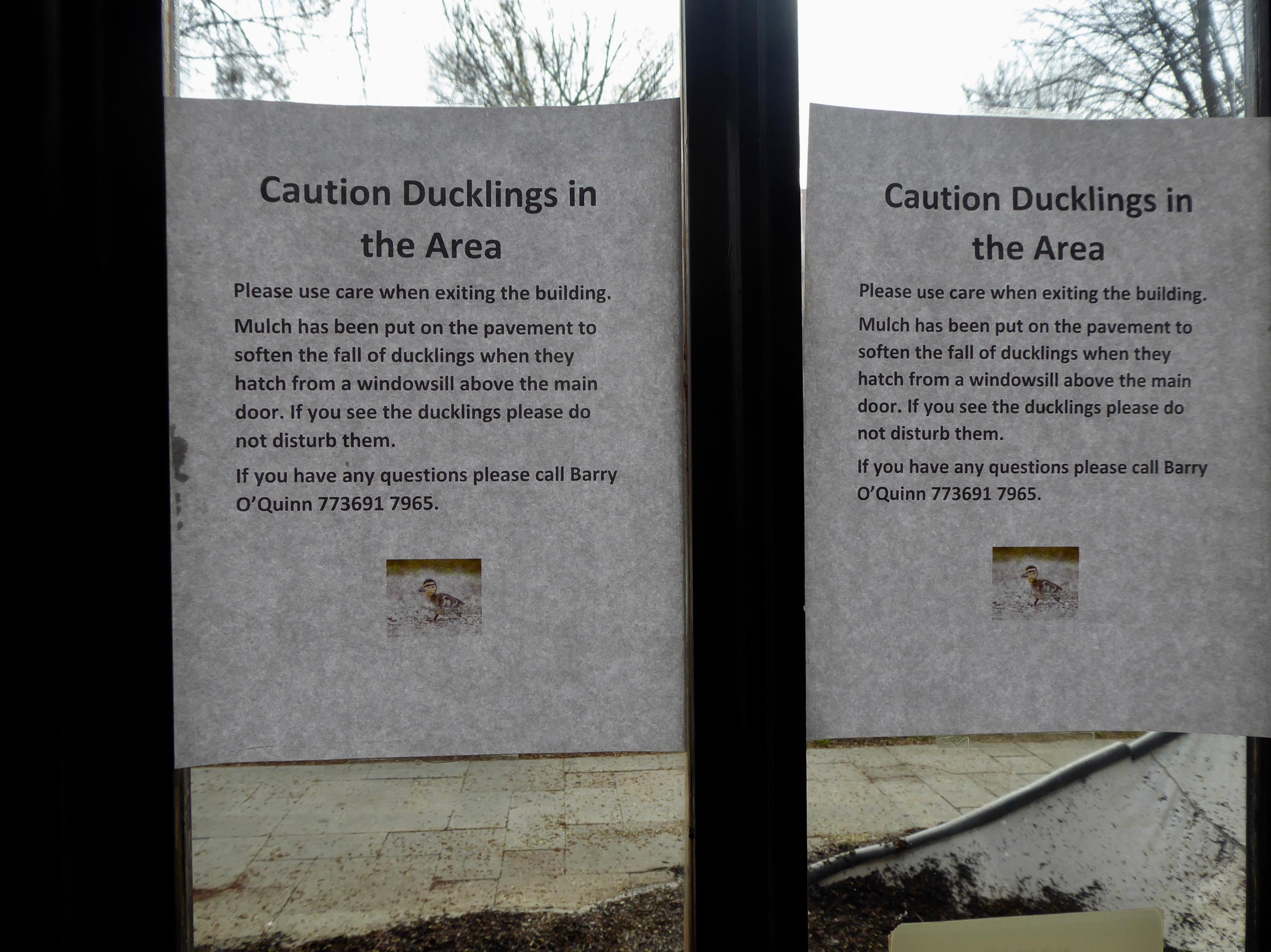 The curved route from “B” to “D” in the photo above is the route that, I think, Honey will take when leading her brood to the pond.

Here’s Honey on her nest this morning: 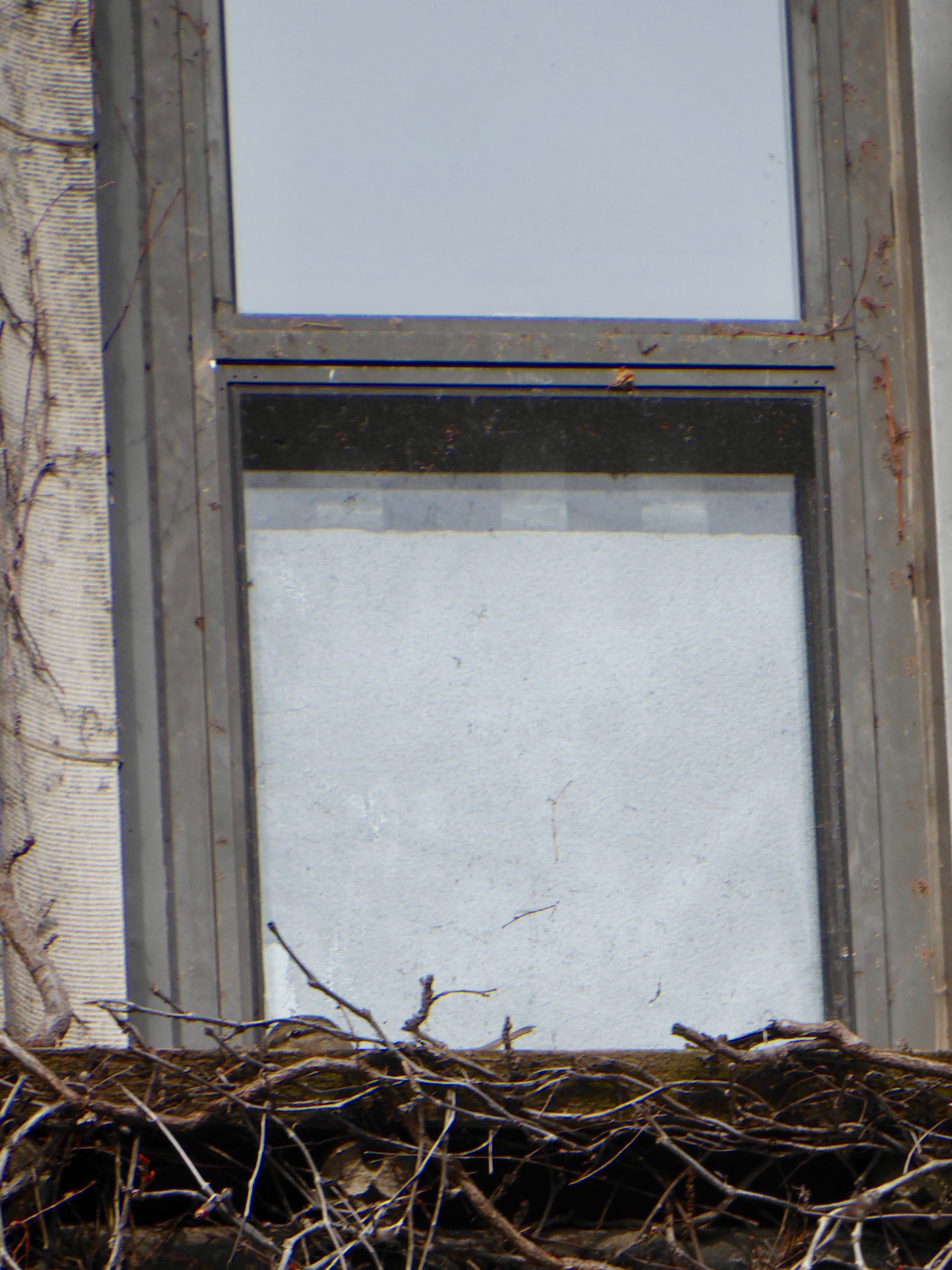 And Dorothy on her nest on the other side of the building—a much more propitious location. 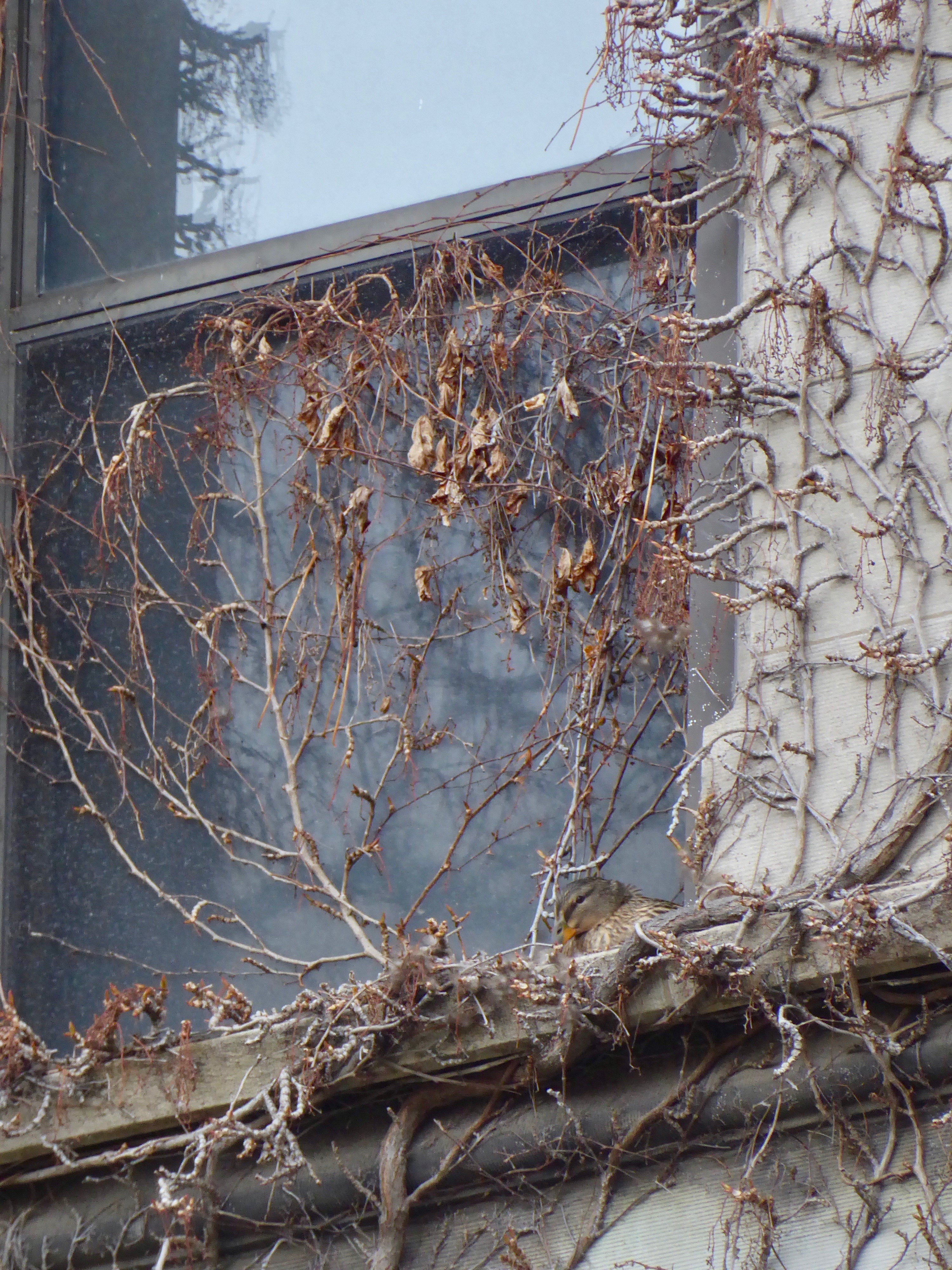 Inside, in my old lab, the comestibles and duckling ramp are ready. We have eight pounds of mealworms and about 100 pounds of adult duck and duckling food. The freezer is stocked with frozen corn: 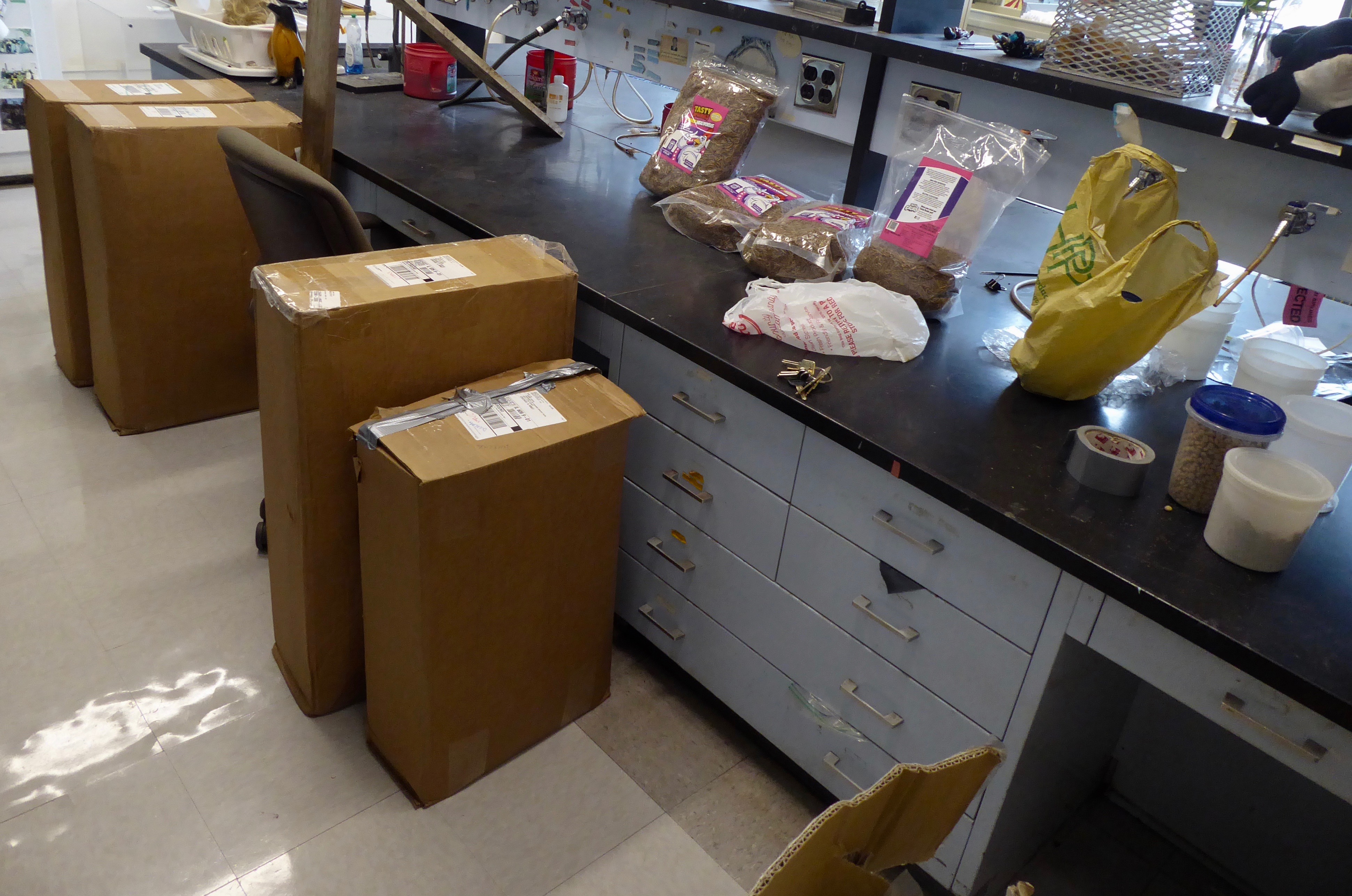 I don’t think we could be any more ready. Honey and Dorothy are surely the most cared-for mallards in Chicago, though they have no idea of what we’ve all gone through to ensure their safety and that of their broods (not to mention Wingman’s genes). My eternal gratitude goes to the folks in Facilities, including Katie Peck, Kevin Austin, and Brandon Rux, for helping design and install the modifications shown above, as well as Associate Vice President Tracy McCabe for handling the administration’s end.

Thanks as well to all the workers who put down mulch, erected fences and trampolines, and did the other on-site work (sadly, I never met them), as well as Eddie, who put up the DuckCam.

Finally, thanks to Media Relations and Communications, including Jeremy Manier, Colleen Mastony, and Nicole Watkins, for handling the publicity and helping coordinate these arrangements.