Even if you didn’t know the name of Kagonekoshiro (“White Basket Cat”), you’ve probably seen pictures of the famous Japanese moggie. He was the world’s chillest cat, able to relax and sleep with all manner of stuff balanced on his head or on his paws. And his staff also trained other cats to emulate him, though I don’t know how you train a cat to be chill.

This story is from People Magazine (click on screenshot below):

An excerpt and a video:

Internet Famous Cat Shiro, Once Called the ‘Most Relaxed Cat in the World,’ Has Died
Shironeko, otherwise known as Shiro the cat, has died. Shiro’s death was announced earlier this week on a popular fan page dedicated to the Internet-famous feline, an 18-year-old Turkish Van cat who hailed from Japan. “Our beloved Shironeko,” read the post. “March 8th, 2002 – March 2nd, 2020.” A variety of photos highlighting Shiro’s calm, cool and collected nature were also shared alongside the short note, including several shots that appeared to show the cat fast asleep, even while a variety.

Here’s the link to the announcement: 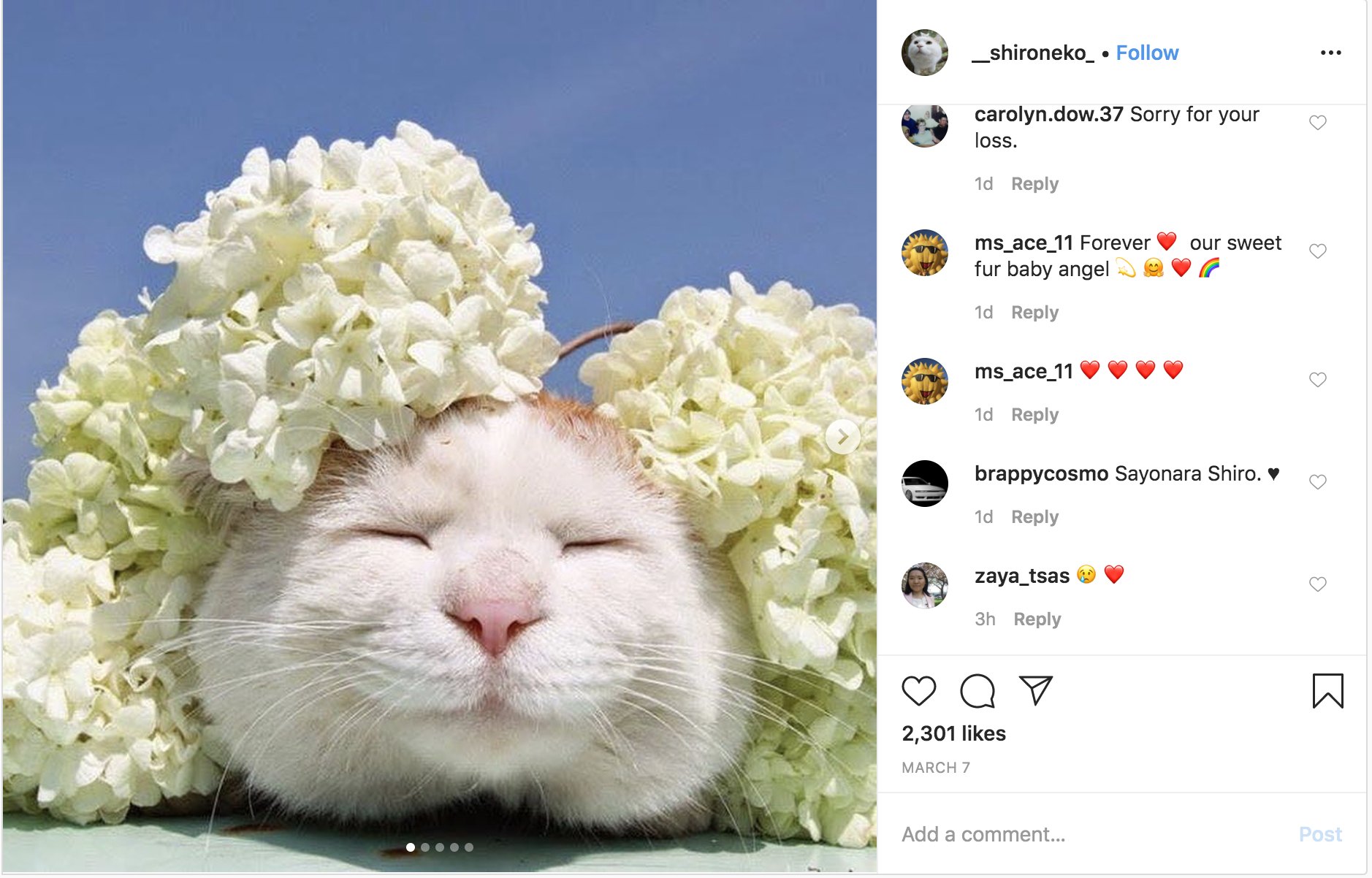 And a video. RIP, oh Chill One. You had a good run of 18 years, and many people loved you, including me.

This video shows his chillness, and also why he was known as “White Basket Cat”:

This post from Sad and Useless (click on screenshot below) shows an increasing (and to some disturbing) trend: giving cats haircuts that make them look like Stegosaurs. (Perhaps Matthew will approve, since he loves that species.)

They ask for your comments, and mine is that it offends the dignity of the cat and serves little purpose (save perhaps some marginal cooling in hot weather) except to entertain the staff. Nevertheless, here are five moggies who suffered this indignity. 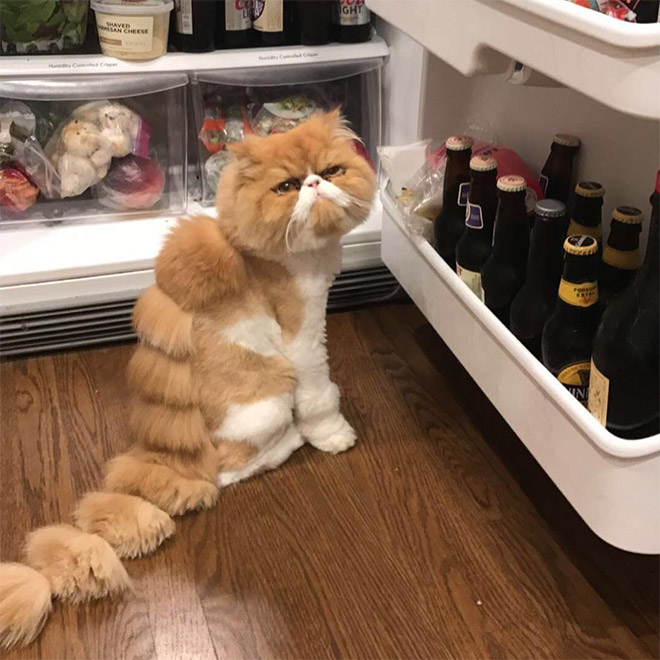 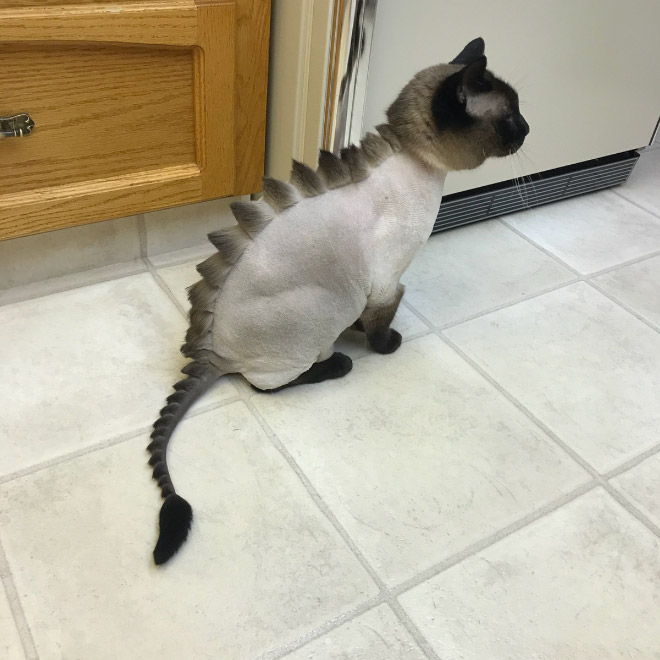 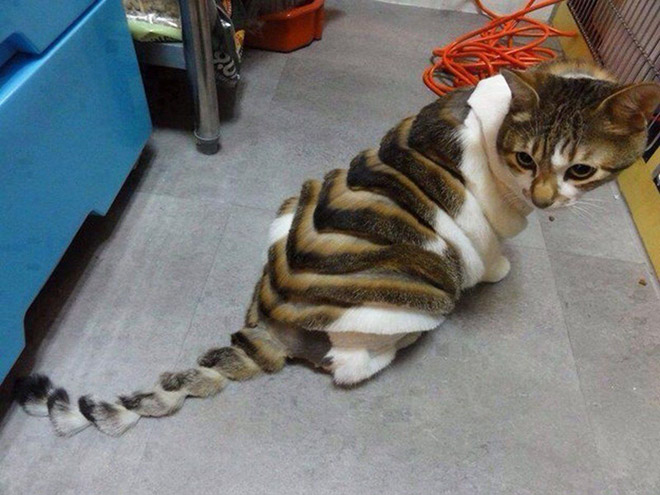 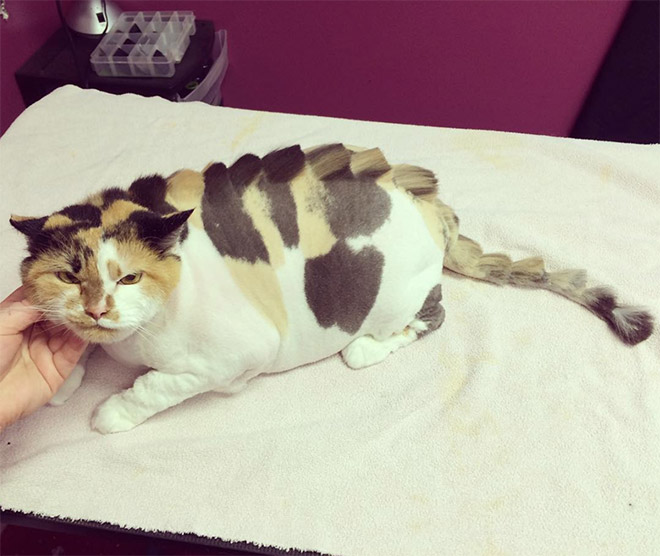 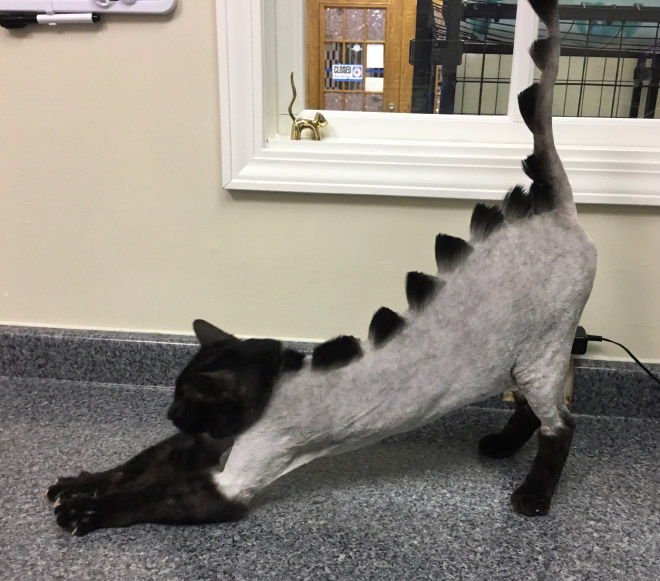 From The Dodo, we have the story of Nellie, a cute little cat who did a bad thing (click on screenshot): 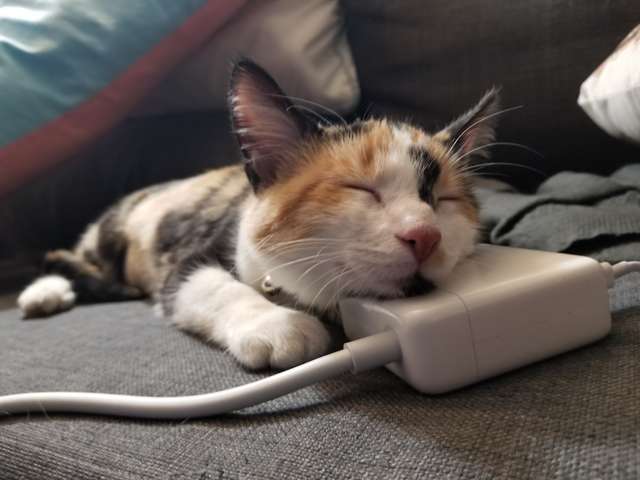 On her quest for snacks, Nellie often gets herself stuck or into places she’s not supposed to be — and even when her parents think that something is safe from her antics, Nellie is always quick to prove them wrong.

Riebel is a veterinary student, and recently she decided to bake some cookies for her fellow volunteers at the Wildlife Medical Clinic through the University of Illinois. She put some of the cookies in a sealed Tupperware container, figuring they’d be safe in there — but unfortunately, they weren’t safe at all.

“Nellie somehow opened the container and took all the cookies out and onto the floor,” Riebel said. “The funny thing is I know she took them all out separately because if she had just knocked them out of the container, the cookies would have broken. But they were spread out across our dining room floor with little bites out of each. So she took them all out separately and chopped [chomped?] them all separately and did it quietly enough to not get noticed.” 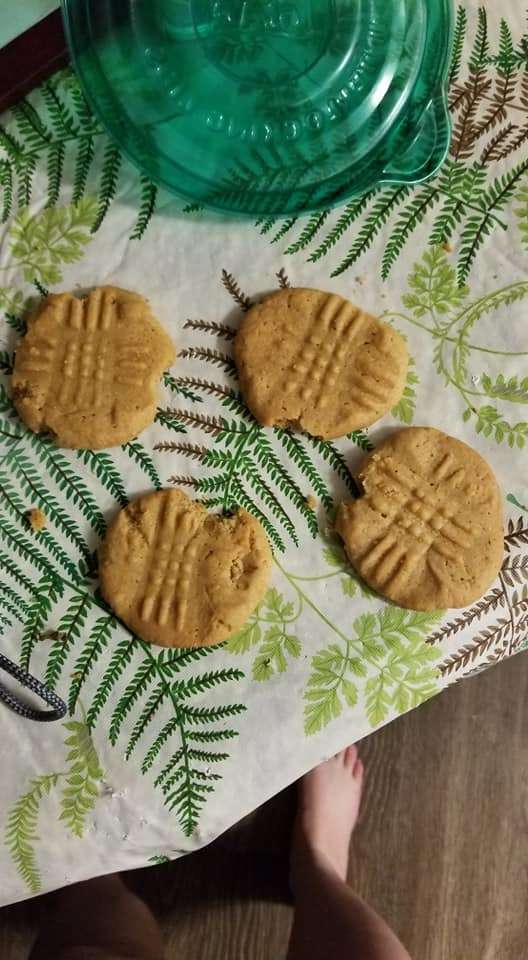 I’d still eat the cookies, though; wouldn’t you? After all, cats don’t get coronavirus. The story continues:

At some point, Nellie knocked something over, so Riebel took a break from studying and came downstairs to see what was going on — and found her cookies on the floor, with a bite taken out of every single one. Nellie didn’t even try to pretend it wasn’t her, and instead seemed pretty pleased with herself that she had managed to find such yummy snacks.

“She did not seem guilty,” Riebel said. “She plays it off very well. It’s both infuriating and hilarious. She’s very proud of herself.” 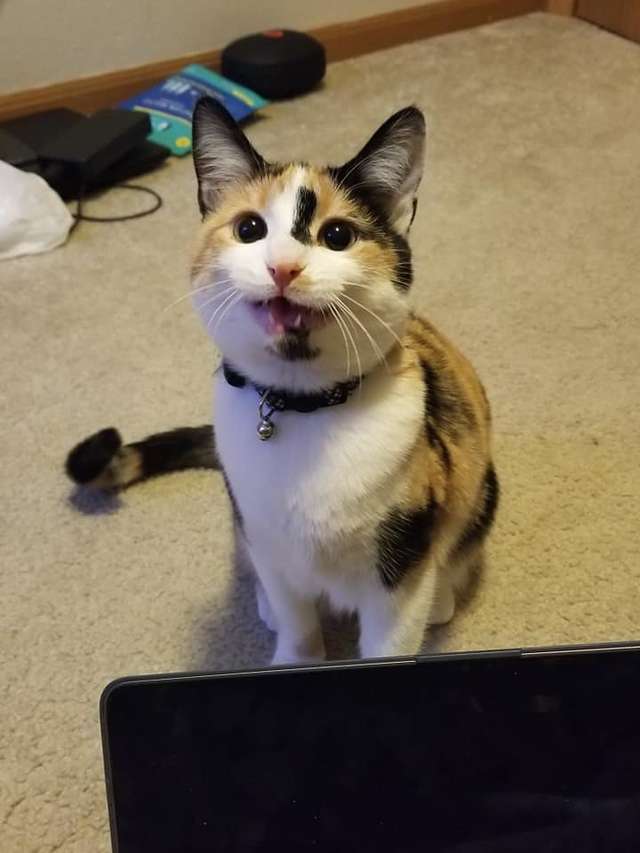 Moar lagniappe: this pair of strays, found in a London market, was fostered and then adopted by readers Laurie and Gethyn from Feline Friends London. As Gethyn said, “May I present Octavia Sadie and Alcestis Jerry.”

Look how they’ve grown, and how lovely the sisters are! (And one of them bears my name. . . ) 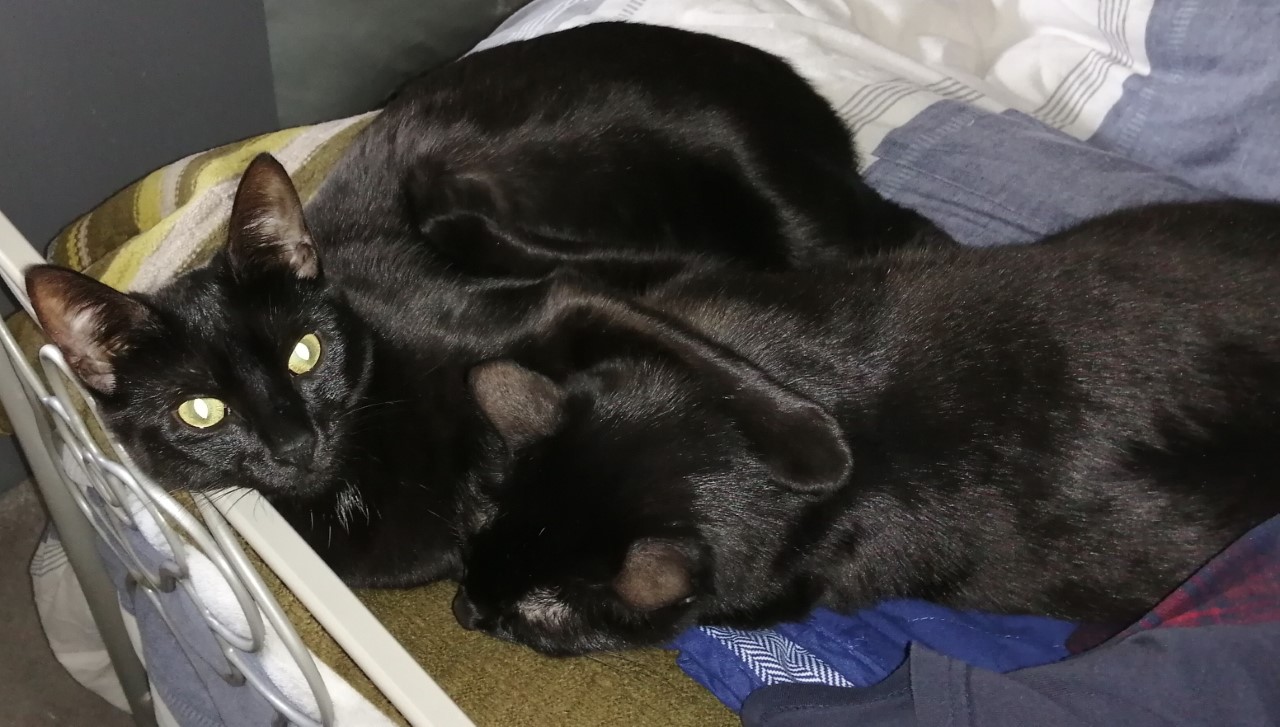 9 thoughts on “Caturday felid trifecta: Kagonekoshiro dies; cats with dinosaur cuts; cat opens cookie jar and takes a small bite of every one (and lagnaippe)”