A bad reason to invite Charles Murray to Middlebury College is to incite violence, which is what happened when he was last invited three years ago (see several of my reports here). Although Murray wasn’t going to talk about race or intelligence then, that didn’t matter: he’s been forever deemed a racist for co-authoring The Bell Curve. (I strongly doubt that more than 1% of the protestors had ever read that book [I haven’t]; they were going on social-media outrage). During Murray’s last visit, his talk was interrupted (eventually it was livestreamed from an empty hall) and both he and his host were attacked, with the host, Allison Stanger, sustaining a neck injury and, as I recall, a concussion.  Along with other “cancel culture” incidents at Middlebury in the past few years, this has given the college somewhat of a bad reputation. It was becoming The Evergreen State College of the East.

A good reason for inviting Charles Murray is twofold: so the students can hear what he has to say, and so they can be tested to see if they’ve grown up. If the latter is the case, Middlebury’s reputation will be somewhat restored, and the students will have learned the art of peaceful protest. Or (my recommendation), they shouldn’t protest if they don’t know anything about Murray’s work, but simply ignore his talk, though that’s not so great, either. Actually, they should go to his talk and ask questions.

At any rate, Murray has been re-invited, though the College is now closed because of coronavirus. And the students and faculty are beginning to ramp up their protests, at least according to this letter to the editor (sent to the Middlebury President and her Senior Leadership Group) in the Middlebury Campus, the student newspaper. The letter is written by two named faculty as well as a lot of faculty too scared to divulge their identities (see below). Click on the screenshot to read about the protest.

The authors are a sociology professor and a film and media culture professor (humanities profs, of course: scientists don’t do this stuff). The rest of the signatories are part of the “Middlebury Faculty for an Inclusive Community” (MFIC), whose website says this:

Rather than generating a list of signatories, we offer some specific contacts for different areas of our work and representatives on relevant committees. Not all of members of our group want to identify themselves publicly, but here are many who feel comfortable doing so.

What a bunch of cowards—and they are professors! At any rate, the letter gives four reasons why Murray should not have been invited. Only one is partly valid, and another is weakly valid. The rest is bunk.

The first reason is the usual—Murray’s presence will “endanger members of our community”, “cause significant psychological stress”, and other ridiculous claims:

We believe that over the past three years, our campus has grown significantly in becoming a more inclusive, self-aware and responsive institution, that is open to frank conversations about racial and other inequities that structure our community and broader world. A lecture by an ultimately insignificant, debunked pseudo-scholar, arguing that race, class, and gender inequalities are a product of genetics rather than social systems and practices, would typically be a laughable and easy-to-ignore event. However, the presence of this particular insignificant, debunked pseudo-scholar reopens many wounds that we have worked hard to heal over the past three years.

We write to our administrative colleagues in Old Chapel seeking answers that we hope to receive in a public forum. The largest question that dogs us is, “How did you allow this to happen?” As stewards of Middlebury’s institutional culture, mission and reputation, you certainly recognize the many ways that this is a bad idea — no matter how events might play out on March 31, the event will cause many of us significant psychological distress, provoke in-fighting, generate bad publicity, potentially endanger members of our community, waste hours of time planning and stressing, and ultimately yield nothing beyond rekindled hostility. We believe you could — and should — have taken steps to stop this event from happening on the grounds that it was not in the best interest of the institution and goes directly against our core values of integrity, inclusivity and intellectual honesty. Murray’s talk seems predicated on the “pillar” of academic freedom, but also contradicts our other two pillars of integrity and respect.

I am so tired of rebutting this malarkey. First, Murray wasn’t (and probably isn’t) going to talk about the genetics of IQ and race. Ergo, you can’t censor him based on a 26-year-old book about those topics that you haven’t even read. Second, there’s the implicit and shabby claims that free speech is great BUT in this case Murray isn’t a valid scholar and is also purveying hate speech.

As for the psychological damage and stress, my advice to the students is this: DO NOT GO TO THE TALK! Is that so hard? Why torture yourself?

A more valid complaint by the writers is that only three people invited Murray to speak, and even the College Republicans, whom they represent, didn’t get a say. If that’s the case, the procedure for inviting speakers has been violated. Whether that should mandate cancellation is above my pay grade.

The third reason is that the College Handbook says that a full-time faculty or staff member must be the advisor of the inviting group. However, the advisor of the College Republicans is an “Executive in Residence,” one James Douglas—one of the inviters.. However, Douglas happens to be the former (Republican) governor of Vermont, the state where the College resides.  According to the MFIC’s letter, such a man can’t possibly have an understanding of the impact of the decision. That’s dubious, but if the College wanted to censor a speaker based on a technicality, they have this and the reason above to lean on. But those seem like lame excuses for censorship.

Finally, the letter says that Murray’s talk would require significant “security and facilities staffing”. Sadly, the College requires student organizations to “bear full responsibility for arranging and financing any Department of Public Safety Services that may be necessary in connection with controversial speakers.” That should not be the case, for it prevents groups from inviting the very speakers the students need to hear: controversial ones. Middlebury needs to ditch that rule immediately. And besides, if the College Republicans can fund security, why should the MFICers beef?

However, WHY would they need significant security? It’s because the protestors could wreak havoc and possibly attack the speaker and his supporters. This would not be an issue if the protestors were peaceful, or simply had a counter-event or didn’t go to the talk. A group should never be afraid to invite a controversial speaker because the protestors might be violent. If they are, they should be arrested or suspended. (As I recall, some of the protestors of Murray’s last talk were sanctioned by the College, but their punishment was never revealed.) And no group should be the costs of inviting a speaker, or at least the costs should be equalized among student groups.

In the end, because I don’t know Murray’s work or the topic of his prospective talk, I can’t judge the wisdom of inviting him. But it least it will be a test of whether Middlebury truly tolerates free speech, and whether the students and faculty have grown up. Judging by the letter above, they have a ways to go.

I’ll end with a comment made on the article by one writer: 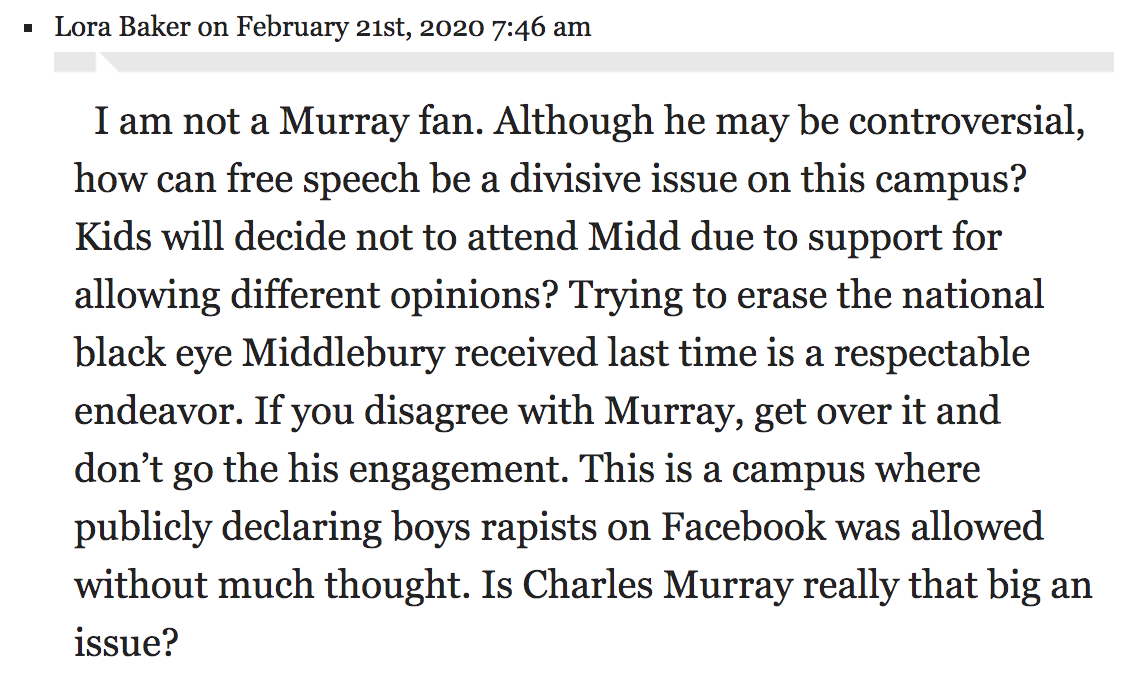