The Foundation for Individual Rights in Education (FIRE) has issued their booby prize for the ten worst colleges for free speech of the year. (The prize is for 2020 but reflects what happened in previous year.) Click on the screenshot below to go the article. What bothered me, but didn’t really surprise me, is that my Ph.D. alma mater Harvard University is on the list.

The list they give is in no special order: as FIRE’s introduction notes:

As in previous years, FIRE’s 2020 “worst-of-the-worst” list is presented in no particular order, and both public and private colleges are featured. Public colleges and universities are bound by the First Amendment. Private colleges on this list are not constitutionally required to respect student and faculty speech rights, but explicitly promise to do so.

This year, we also bestow a special distinction upon Rensselaer Polytechnic Institute. FIRE has criticized RPI’s censorship so much in recent years that those three letters are starting to rub off of our keyboards. For ruining our computer equipment and maintaining a years-long rap sheet of flagrant censorship, FIRE awards RPI with the Lifetime Censorship Award — reserved for a college or university that threatens the free speech rights of its students and faculty so often that it deserves individual infamy. We couldn’t think of a more worthy recipient than the Sensational Sentinels of Censorship of Troy, New York.

With this dubious distinction, RPI joins fellow perennial censor DePaul University, which earned the award in 2018.

I’ll briefly list the colleges and why they made the list. Some of these, especially Harvard, have appeared on this website, and I’ll put links to my posts where they’re relevant.

“In retaliation, Ayatollah Khomeni should tweet a list of 52 sites of beloved American cultural heritage that he would bomb. Um… Mall of America? …Kardashian residence?”

For that, Babson fired him: he made “threats” and “condoned violence”.

2.) Jones College (Ellisville, Miss.) Student Mike Brown was stopped several times from exercising his free-speech “rights”. On one occasion he was prevented from recruiting students for a campus organization, the Young Americans for Liberty, saying that he needed permission to speak on campus. There were several other incidents, and Brown has filed a First-Amendment lawsuit against the school.

3.) Harvard University (Cambridge, Mass.) You’ve heard some of the incidents leading to Harvard’s inclusion on the list, including the firing of housemaster Ronald Sullivan from running a residential dorm because he accepted a position as a lawyer on Harvey Weinstein’s defense team. See my reports here. (Sullivan, who’s black, has a long history of defending the marginalized as well.) Further, the school continues its policy of punishing students who join single-sex, off-campus clubs, the “finals clubs” that are either all-male or all-female. (See my reports here.) That violates freedom of association. Finally, as FIRE notes:

And just a few months ago, Harvard implemented a new speaker policy requiring that events deemed to involve “high profile, controversial speakers, or VIP guests” have a neutral moderator in place, ostensibly to prevent disruptions. Unfortunately, the policy is riddled with ambiguities, leading the Harvard Crimson student newspaper to label the policy “troublingly vague.”

4.)University of Scranton (Scranton, Pa.). The student government rejected a student proposal to establish a chapter of the conservative organization Turning Point USA on campus. The rejection clearly constituted, given the nature of the discussion, a form of “viewpoint discrimination.”

5.) Middlebury College (Middlebury, Vt.)  As FIRE reports (and as I reported here, here, and here):

Just hours before controversial Polish scholar and politician Ryszard Legutko was set to speak at Middlebury College last April, campus administrators made national news by unilaterally canceling the event, citing unsubstantiated “safety risks.” In doing so, they denied a willing audience the opportunity to hear Legutko’s arguments and critics from challenging him, either through peaceful protest or pointed questions.

Of course Middlebury students also attacked Charles Murray when he spoke there in 2017, a display of censorship second only in egregiousness to those of Yale and The Evergreen State College. Murray is scheduled to speak at Middlebury again this year, I believe, so we’ll see if those entitled students have learned to behave themselves.

6.) Long Island University Post (Brookville, N.Y.). A student was investigated for possessing and distributing “forbidden flyers”. According to FIRE, “These flyers, which had been appearing on campus throughout the school year, were labeled “Common Sense” à la Thomas Paine and contained parodies and poems criticizing LIU Post and its administrators, particularly President Kimberly Cline. Apparently the school doesn’t like criticism of itself and its administration. Too damn bad.

7.) University of Connecticut (Storrs, Conn.). A group of students were walking across a parking lot and one of them said the n-word. They thought they were alone, but were overheard. The campus police launched a thorough investigation, using cameras and wi-fi records, and, according to FIRE, “charged them with a criminal offense under a century-old statute outlawing race-based “ridicule” in commercial advertisements. (Connecticut police have long since ignored the text of the law and now abuse the statute to arrest the homeless, mentally ill, or people who direct race-based insults at police officers.)” The students were also brought up on college disciplinary charges despite a federal court order that U. Conn. couldn’t impose hate-speech policies on its students (it’s a state school and must thus abide by the First Amendment.)

The students have brought a First-Amendment lawsuit against the University. I suspect they’ll win. And get this: FIRE reports something as bad:

Not to be outdone, the president of Western Connecticut State University pledged criminal charges and expulsion for any student responsible for “It’s OK To Be White” and “Islam is right about women” flyers. Censorship, it appears, is contagious.

Criminal charges and explusion for saying that? Remember WCSU is also a state school, and any charges won’t stick.

8.) Syracuse University (Syracuse, N.Y.) Multiple violations here, including failure to allow a conservative group, the Young Americans for Freedom, to have a chapter on campus unless—get this—the YAF dropped its requirement that students believe in “conservative values.” That wasn’t considered “inclusive,” but of course such a demonstration is viewpoint discrimination. There were other incidents, too, including, suspension of all fraternities, including minority ones, for a racial slur uttered by someone who wasn’t a fraternity member. Read the article to see even more violations of free speech.

9.) Doane University (Crete, Neb.). As I reported in May, the University suspended librarian Melissa Gomis for including a photograph of a 1926 college holiday party of students in blackface in a display of historical material from the University archives. When students complained, Gomis removed the material—but she was still suspended! She’s since been reinstated, but this is one of the more egregious actions taken against a University employee.

10.) Portland State University (Portland, Ore.). Schools don’t get more woke than PSU, and you shouldn’t be sending your kids there. They’ve harassed Peter Boghossian for participating in the “hoax paper” scandal, but that isn’t even mentioned in the FIRE article, for the issues there, I suppose, aren’t about free speech. But there were two other instances of censorship, one from the Right and the other from the Left. FIRE reports:

In January 2019, the Portland State International Socialist Organization, a student group, planned to hold a meeting about capitalism, climate change, and socialism. Joey Gibson, the non-student founder of the conservative “Patriot Prayer” group, took to Facebook to announce that he would show up uninvited, hoping to make the students answer for “antifa.”

This led campus police to cancel the meeting, later claiming that the students agreed to the cancelation. (They had not.)

If Portland State’s police learned anything, it was the wrong lesson. In March, a protester armed with a cowbell filibustered a meeting of the College Republicans, which had convened to hear a conservative blogger speak about the Second Amendment. Four campus police officers stood by while the protester prevented the meeting from taking place.

“We want to deplatform you,” said the protester. “We want you to stop fucking talking.” And Portland State’s police didn’t so much as ask him to stop, notwithstanding a university policy barring “disruptive or disorderly conduct” which “interferes with the use and enjoyment of the facilities, including … [n]oise that is disturbing to others.”

Their excuse? They were concerned that it might “escalate a potentially unsafe situation” to intervene during an “event advocating gun rights.” To protect and swerve.

SPECIAL AWARD: Rensselaer Polytechnic Institute (Troy, N.Y.) RPI get a lifetime achievement award for censorship for repeatedly trying to stifle student expression, especially expression that criticizes the administration. And that administration has a real penchant for prohibiting students from handing out activist flyers. The sordid store is at this link.  And here’s their award: 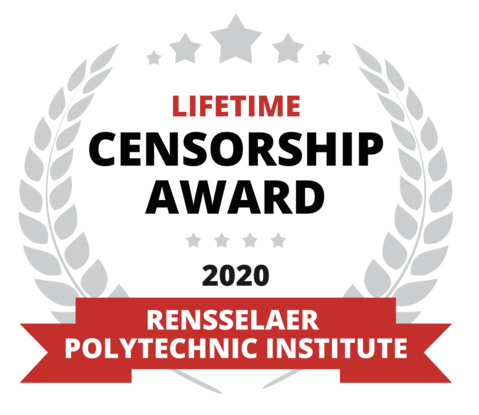 As usual over the last decade, most of the attempts to abridge free speech come from the Left. But not always, as we can see from the Portland State incident. It’s just that the Left has control over most campuses now, both from student sentiment and the leanings of administrators, and the Left also has a penchant for being censorious.  But, of course, the prevention of censorship must be applied even-handedly, and eternal vigilance towards all ideologies is the price of free expression.

5 thoughts on “FIRE’s yearly Hall of Shame: the 10 worst colleges for free speech”