At the end of last year, I pointed out that the University of California system was implementing a new procedure for hiring faculty. It involved candidates submitting “diversity statements” that recounted their knowledge about diversity, their past efforts to increase diversity in their institutions, and their plans for promoting diversity if they were hired.

While I favor a form of affirmative action to increase diversity in hiring, I objected to the diversity-statement procedure because it not only demands adherence to a specific ideology (candidates’ diversity statements were scored on a point system, with higher points given to those whose statements matched the philosophy of the evaluators), but also gives the diversity statement priority over all other qualifications: if a candidate’s diversity score didn’t meet or exceed the cutoff threshold of 11 points, the application was discarded without further review.

This procedure is unfair because of its use of an ideological test, because it doesn’t count other “outreach” activities that are valuable but don’t promote diversity (e.g., giving talks to high school children, writing popular articles on science), and because it bars minority candidates who haven’t engaged in diversity-promoting activities before they apply for jobs.

Imagine, for example, an African-American scholar who has spent her time with her nose to the grindstone, accumulating an admirable academic and teaching record without having had the time or the will to promote diversity. As valuable as she would be to a department—and believe me, universities are desperately looking for good minority candidates—she wouldn’t have a chance of being hired under this “threshold” process. (Such scholars exist, for I know of some.) I find this process ludicrous and counterproductive, as I find the use of all mandatory diversity statements.

Now, however, according to this report in Science magazine, the National Institutes of Health (NIH) is giving a ton of money to 12 universities for “cluster hires” (groups of people hired at once to beef up programs)—and that hiring process, even if not designed to increase diversity, will require every candidate not just to submit a diversity statement, but to show a “track record” of working to promote diversity. (“Diversity”, as always, means racial and gender diversity, not any kind of intellectual, class, geographic, or economic diversity.)

Click on the screenshot to read the news item: 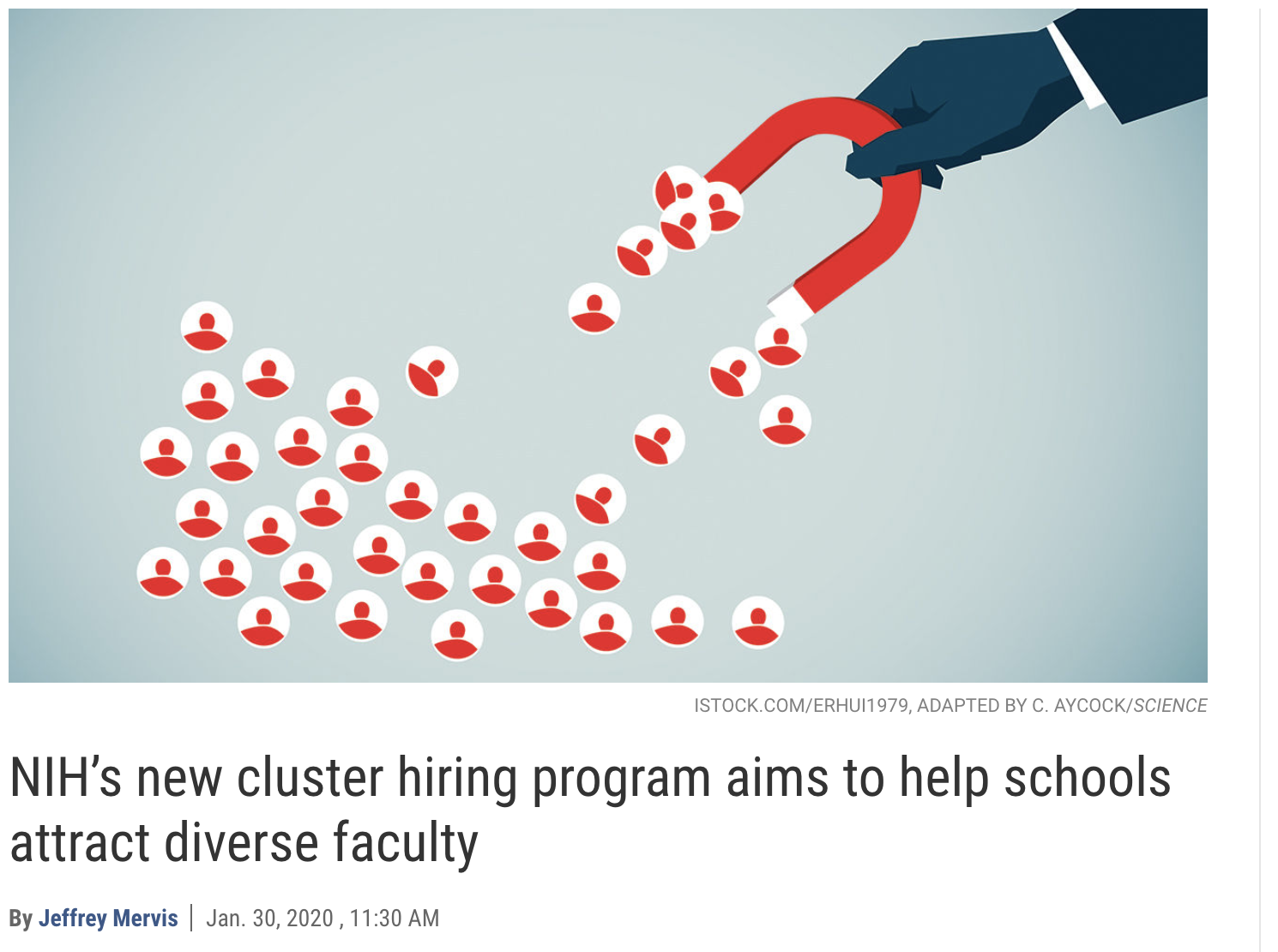 The article reports that the NIH is appropriating $241 million to create a program called Faculty Institutional Recruitment for Sustainable Transformation (FIRST). This will provide roughly $20 million to each of a dozen schools, each aliquot supporting a “cluster hire” of ten new faculty members.  Cluster hires have been used to increase diversity, but also for non-diversity initiatives, like “[accelerating] their capacity to do research in an emerging area, such as computational biology or nanofabrication.”

And the NIH initiative, despite having both diversity goals and “emerging area” goals, is requiring every candidate to prove that they have already promoted diversity. Note that this statement is required because restricting hires to individuals from underrepresented groups is illegal for the NIH. Here’s the crucial statement from the article (my emphasis):

Not all of the 120 new hires would need to belong to groups now underrepresented in academic medicine, which include women, black people, Hispanics, Native Americans, and those with disabilities, says Hannah Valantine, NIH’s chief diversity officer. In fact, she told the Council of Councils at its 24 January meeting, any such restriction would be illegal and also run counter to the program’s goal of attracting world-class talent. But Valantine says every person hired must have a track record of working to change a culture that too often makes scientists from underrepresented groups feel unwelcome on campus and isolated in the laboratory.

This is pretty explicit in imposing a diversity-promoting test on the cluster hires. Every person hired must have a track record. That again leaves out minority candidates who have been doing things other than “changing the culture”. (And it presumes that there is a culture that makes underrepresented scientists feel unwelcome, something for which there is no evidence save anecdotal statements.) Without that record, black or white, male or female, you don’t stand a chance of getting hired under the NIH program. And that in itself is “counter to the program’s goal of attracting world-class talent.”

Fortunately, there are organizations, like that run by Chad Topaz of Williams College, that will, for a donation, help candidates write a diversity statement. All you need is to hand over $100 or more to Topaz’s organization, and they’ll help you look like a great promoter of diversity. (I can only imagine how this works.)

Well, regardless of whether such bigotry exists (this is nearly always the default explanation for underrepresentation of some groups), there’s independent evidence of how valuable minority candidates already are in academia. As the article notes:

New faculty hires don’t come cheap. At Emory, a standard startup package for a new professor in the natural sciences or engineering exceeds $1 million, Freeman says. And Valantine says startup costs for a basic scientist with a wet lab at a medical school could run as high as $3 million. Minority scientists usually command a premium salary because they are in such high demand, Freeman notes. [JAC: Carla Freeman is Emory’s senior associate dean of the faculty.]

Yes, it’s true that minority faculty are in high demand: Chicago is always trying to hire them, but the pool of candidates is small. The failure to land such candidates surely doesn’t reflect bigotry on the part of departments, but, in my view, a paucity of candidates because of poorer educational opportunities available for minorities, including worse schools.

Factors like those make a mockery of the notion of “equal opportunity.” And yes, this lack of opportunity goes way back to bigotry that, in the case of African-Americans, started with slavery. It must be rectified, but one has to diagnose how to fix it—and the fix may not involve assuming that hiring committees are racist or sexist. My own view is that it’s going to require a lot of effort and money to equalize opportunity for all Americans from the outset of their lives, and we all know how hard that is. But it’s something we must do.

As I said, I favor affirmative action in such hires if one wants to increase diversity. But that affirmative action should have nothing to do with “diversity statements” or a track record of changing a culture that may not even exist. You just weight the underrepresented but desired characteristics during the hiring process.

The implicit assumption that bigotry accounts for the whole of minority underrepresentation in academia is probably unjustified. First, as the Science article notes, cluster hiring may be the wrong tool:

The scientific literature on cluster hiring is very thin. Freeman and administrators at a handful of other institutions provide anecdotal evidence of its value in fostering diversity, but there are no rigorous studies of how it compares to other approaches. Steven Brint, a sociologist at the University of California, Riverside, is looking at its impact on interdisciplinary collaborations, the most common goal for institutions that have tried it. And his preliminary findings on research productivity suggest cluster hiring may actually impede efforts to foster diversity.

And this statement in the Science piece implicitly assumes that bias is the cause:

FIRST is the latest in a series of programs NIH has launched since 2014 following a 2011 study that showed black scientists are less likely to receive an NIH award than their white or Asian counterparts. NIH has set itself the goal of eliminating that disparity, and Valantine hopes FIRST will take an important step in that direction by using an unorthodox approach to recruiting academic researchers.

But a study published last year, which was highly anticipated, found—and, I’m sad to say, to some people’s disappointment—that there wasn’t any evidence for either race or gender bias in a detailed study of “mock evaluation” of NIH proposals. (The study isn’t perfect, but if it had shown such bias, nobody would discuss its weaknesses!) And the Science article doesn’t even mention this followup!(Click on screenshot):

But the 2011 study cited above also showed that the funding gap remained after controlling for investigators’ “educational background, country of origin, training, previous research awards, publication record, and employer characteristics”. After removing these factors, African-Americans still were 10% less likely to get an NIH award than whites. Does this prove bigotry in the process? Not necessarily, because the study below was also published last year:

It shows that a substantial amount of the NIH award disparity was due not to bigotry, but to choice of topics: black scientists were more prone to apply for funding in fields less likely to receive funding: fields involving “research at the community and population level, as opposed to more fundamental and mechanistic investigations”. It’s thus a fallacy to assume, at the outset, that a disparity in outcomes automatically reflects bigotry rather than other factors like preference.

But regardless of that, for the funding-rate disparity isn’t the main subject of this post, we still need to study racial and sex disparities, and, if they reflect factors that narrow opportunities, we need to fix those things. Since any fixes will take decades, I favor affirmative action in hiring as well as in accepting students. But I adamantly reject the use of mandatory diversity statements as a tool for promoting academic diversity. It’s the wrong fix. And now not only the University of California uses it, but at least ten other universities are poised to join in—at the behest of the federal government, of which the NIH is part.