About two weeks ago I reported on a mini-kerfuffle at the Psychology Today website. Respected social psychologist Lee Jussim at Rutgers, responding to a piece in the British Medical Journal that created a number of Woke Neologisms, created his own piece listing anti-Woke neologisms. Here’s the original BMJ article, now publicly available (click on screenshot):

Now it’s not clear how serious that article is (BMJ tends to publish humor in the Christmas issues), but at least the authors Esther K. Choo and Robert F. DeMayo are real people.  And although the article seems to be lighthearted and semi-humorous, it does so by poking fun of men. In other words, if it were poking fun of women, it wouldn’t have been published since it would be seen and decried as a sexist screed. So it doesn’t really matter whether it was meant to be funny, for underlying it is a general critique of male behavior.

Jussim posted a response on his blog at Psychology Today: a list of his own neologisms mocking the wokeness behind Choo et al.’s piece.  But his piece was immediately removed, for while you can mock male behavior, you can’t mock wokeness. Here’s Jussim’s tweet after he was censored:

PsychToday took down the Orwelexicon Post.
I am appealing.
If I lose the appeal, it will reappear, trust me. Might take a few days.

He clearly lost the appeal. But his “Owelexicon” post has reappeared—in Quillette, of course. Click on the screenshot to see it: 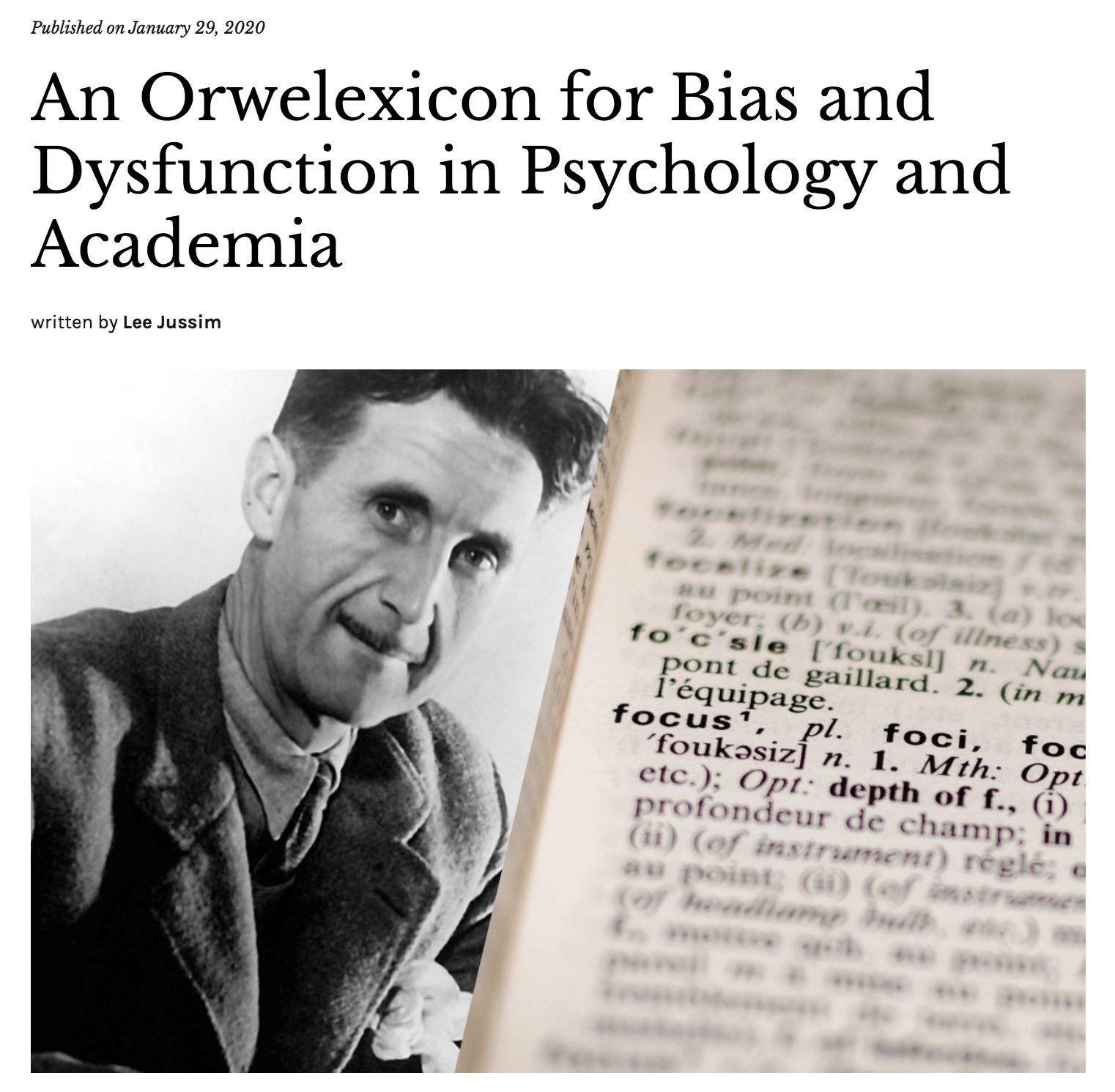 Although Quillette is promoting this article heavily, the terms are of variable humor quality. Here are a few I like:

Blancofemophobia: Prejudice against white women, as exemplified by dismissing the beliefs, attitudes, or behaviors of white women with phrases such as, “White women white womening.” See here for a real-world example.  [JAC: Check out those examples; there’s more than one.]

Brexistential fear: An irrational fear that Brexit will lead to the end of the world as we know it.

Brophobia: Fear of men having a conversation among themselves.

Emotional imperialism: The strange belief that your feelings should dictate someone else’s behavior.

Evopsychophobia: Fear of evolutionary psychology, especially of the possibility that social groups (such as men and women) might have evolved different psychological traits and behavioral tendencies.

Istaphobia: Fear of being called an “ist” (racist, sexist, fascist, etc.), usually followed by self-censorship. [JAC: This is my favorite, for it is real and drives a lot of behavior.]

Wokanniblism: A low-carb, high-protein diet consisting mainly of eating your own.

What bothers me about this kerfuffle is the double standard used in such spoofs, as evidenced in BMJ publishing one that calls out men, and Psychology Today censoring one calling out wokeness. Psychology Today is clearly suffering from istaphobia.

14 thoughts on “Lee Jussim finds a home for his “Orwelexicon””