I swear, some people still can’t get the principles of the First Amendment through their skulls. One of these is the blogger P. Z. Myers, who just wrote a short post on Pharyngula implying that a neo-Nazi accused of making a vile threat across state lines was, according to First Amendment principles, merely exercising his freedom of speech.  As Myers said of the threat:

Myers adds at the end of his post, a screenshot of which I reproduce below (it’s also archived via the Wayback Machine), another implication that “free speech absolutists” would have no problem with Cantwell’s threats:

“It seems that words have power after all, and that ‘free speech’ isn’t carte blanche to say whatever you want after all. Now if only the absolutists could figure that out.”

What Myers is doing here is making up a definition of free speech that nobody holds, and doing that to mock advocates of free speech. I suspect he’s doing this because Myers doesn’t like the way free speech is really construed by courts and “absolutists”—a broad principle that has limitations, but also allows what many people see as “hate speech.” 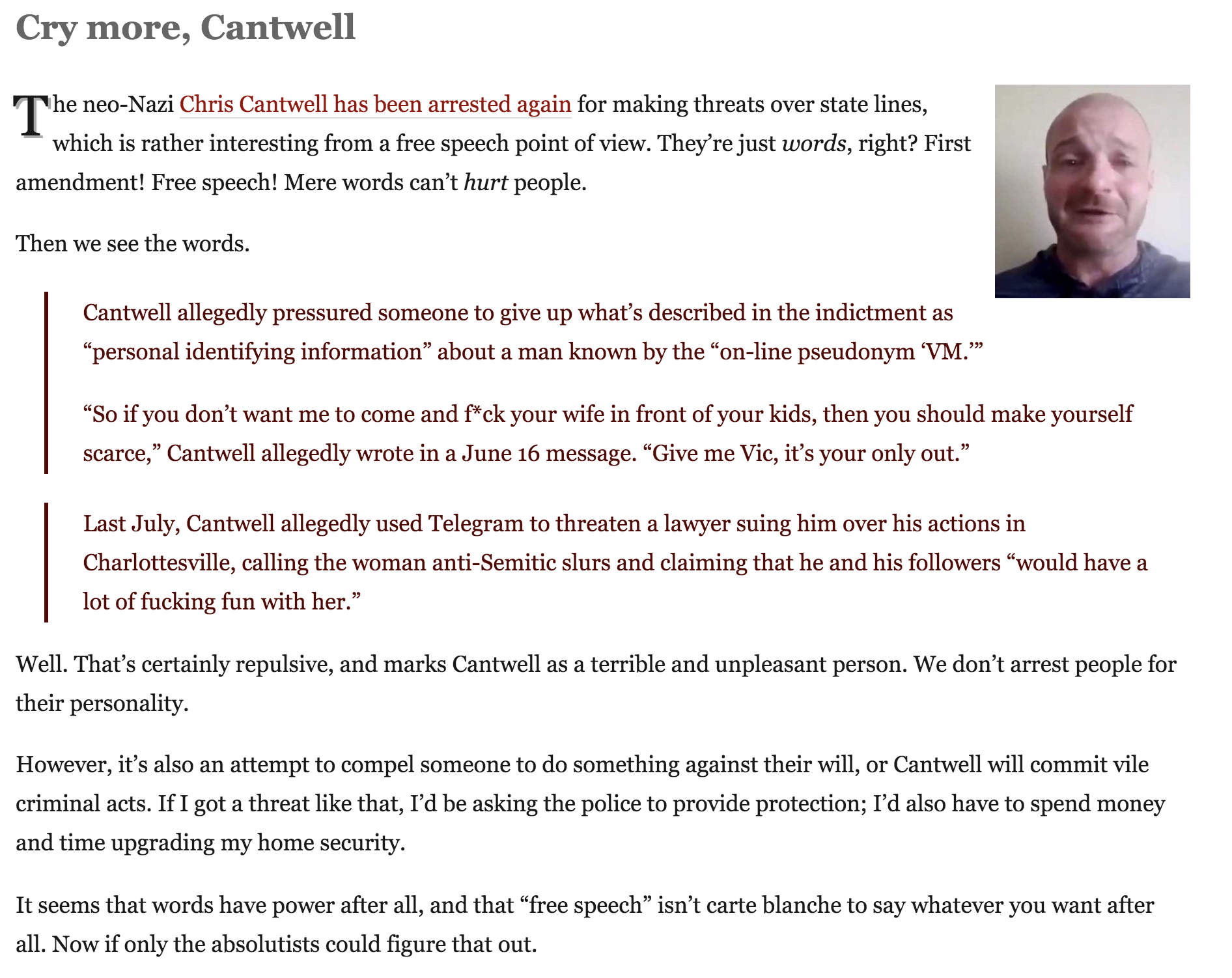 First of all, words do have power. If they didn’t, Dr. King and other leaders of the civil rights movement wouldn’t have prompted a generation of African-American people to rise up against oppression and change the segregation laws. It’s how politicians get power and how movements spread. So that’s not an issue. Nor is there controversy about whether words can hurt people—or at least their feelings. Think of all the segregationists who were offended and hurt at the words of Dr. King, which threatened their culture and way of life. Right now many people claim to be hurt (or even subject to “violence”) by others who say that trans women differ in relevant ways from biological women.

But who on Earth thinks that “free speech is carte blanche to say whatever you want”? I am a free-speech absolutist, but not in the sense of thinking that anything goes when it comes to speech. In fact, I don’t know any free speech absolutist who thinks that way. Over the years, the courts have carved out reasonable exceptions to the First Amendment, and those including banning speech intended to and likely to cause immediate violence, speech that constitutes harassment of an individual or creates a harassing climate in the workplace, prohibition of false advertising and of child pornography, speech involved in libel or defamation, and, of course, personal threats. (You’re really in trouble if you threaten government officials like the President.) There is in fact an entire Wikipedia article about these exceptions, “United States free speech exceptions.” And if you cross some of those boundaries, you can be, fined, arrested, or jailed

These exceptions are reasonable, and when I endorse the First Amendment’s speech provision I am doing so while recognizing that there are caveats—that the right to say what you want is not absolute. And every other free-speech absolutist, as far as I know, is on board with me. I know of none, for example, who endorse grossly false advertising, child pornography, sexual harassment, and so on.

Now look at what Cantwell said! His message—to rape the recipient’s wife in front of his kids—is a clear threat, and he’s made related threats before. A while back I got a similar threat involving sexual violence, and reported it to the FBI. Their agents had a little chat with the perp after they tracked him down, and his threat hasn’t been repeated. I would have no hesitation in asserting that the miscreant had no right to say what he did to me and get away with it.

I find it hard to accept that Myers really believes what he says about free-speech advocates. Rather, it’s pretty clear that he’s attacking a nonsensical definition of free speech, one that nobody holds, in order to discredit the legal notion of free speech as outlined in the Bill of Rights and interpreted by the courts. [As a reader pointed out below, Myers is “strawmanning” with such a definition.]

But why would he do that? Well, my best guess is that he’s not a fan of First Amendment speech, either, and would ban speakers or speech that offends (“hurts”) those adhering to his own ideology. But that’s just a guess.