Down in burning Australia, Tony Eales has managed to photograph some of the insects that haven’t yet been incinerated. Note that there is some mimicry as well as crypsis (camouflage) in the photos below. Tony’s notes are indented:

Today is a mish-mash of recent things that may be of interest.

Last year I photographed a female Clear-wing Persimmon Borer (Ichneumenoptera chrysophanes), a beautiful wasp-mimicking moth whose larvae bore into the stems of certain fruit trees. My first photograph of the new decade was of the male of this species. I was having friends over for a BBQ on the first of January and I was standing around talking when, out of the corner of my eye, I noticed something odd looking on a leaf. I announced loudly “I have to get my camera” and ran off to the office, came back and got the shot. 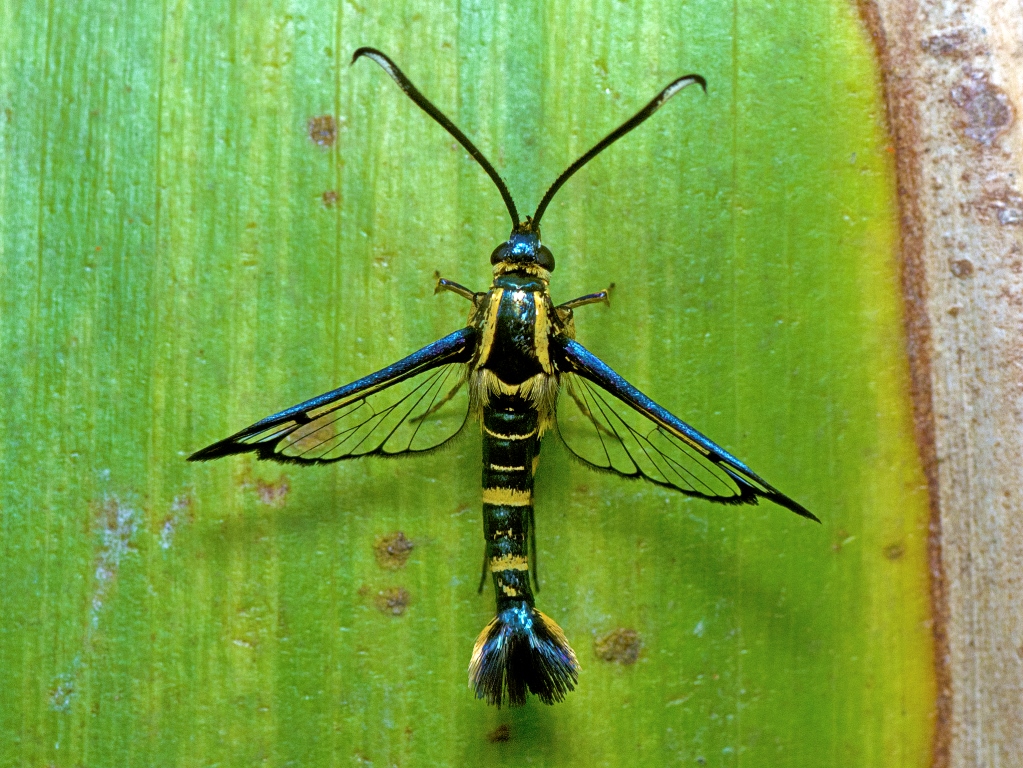 Next a couple of possible wasp-mimicking Stiletto flies. I say possible because the first one, Agapophytus aterrimus, certainly has some of the wasp-mimicking characteristics but also is reminiscent of some Jewel Beetles in the genus Castiarina: 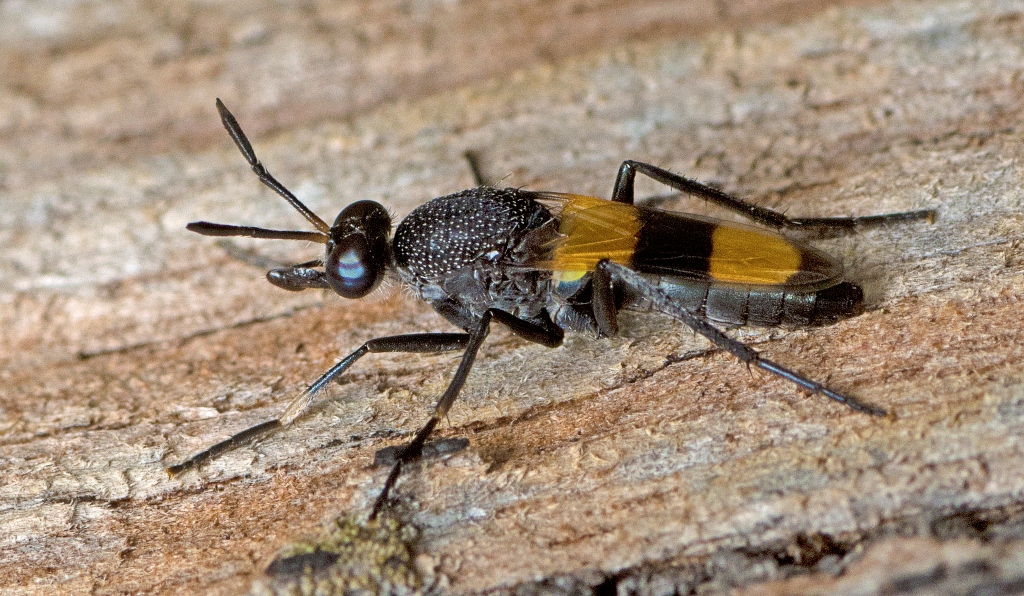 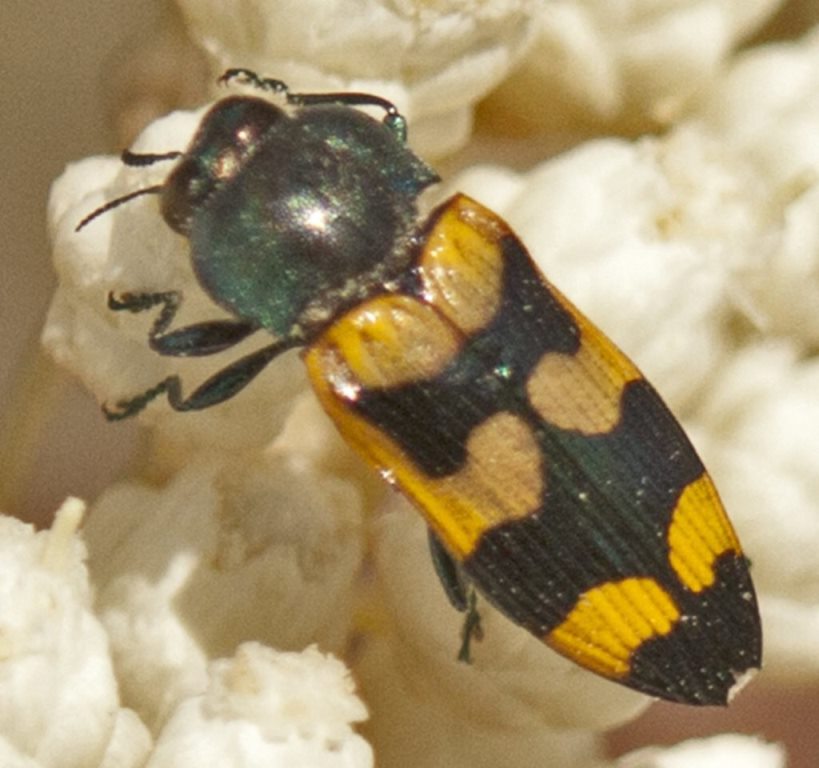 The second wasp-mimic is more straightforward. The fly Agapophytus pallidicornis is a striking mimic of the common spider-wasps in the genus Fabriogenia. In fact, when I photographed it, the only clue I had that I might be dealing with something other than a spider-wasp was that it was sitting still, whereas spider-wasp’s restless searching for prey never seems to pause for even a  second. 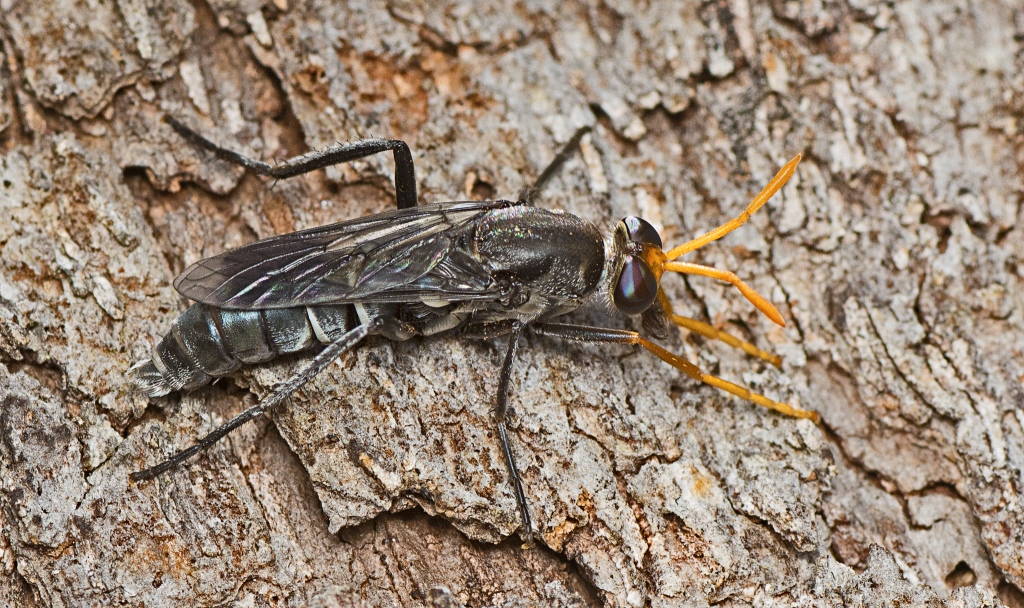 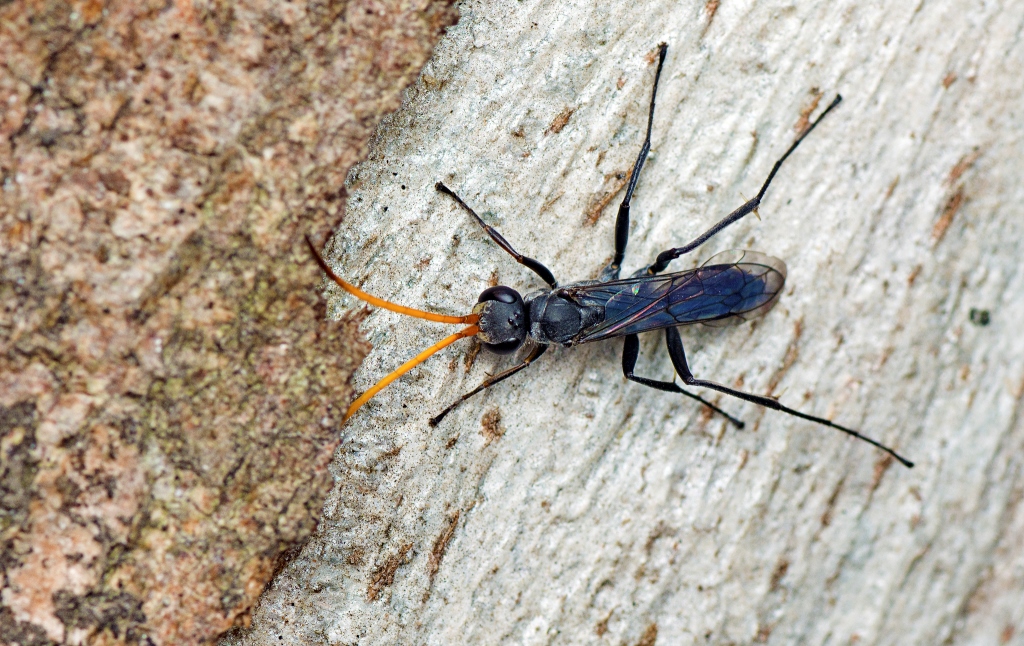 I finally got to photograph the Giant Bulldog Ant (Myrmecia brevinoda). It was a hulking 35mm long and not at all impressed with me. They’re a terrifying ant to play around with, they’re fast defensive and have excellent eyesight and reportedly an unbelievably painful sting. Even so I messed with this one a lot to make sure I got the shot. The only bigger ant in Australia is the queen of this species which can be over 40mm long. 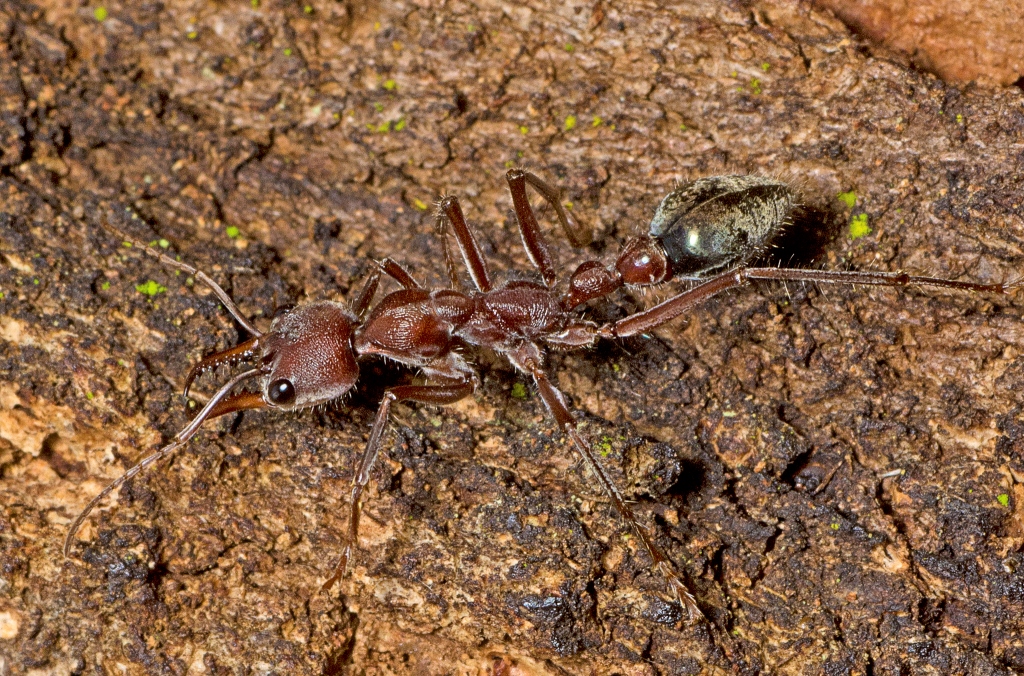 I found the larvae of a species of Tortoise Leaf Beetle which I think is probably Aspidimorpha deusta. The larvae in this family are unusual for carrying around a “faecal shield” made up of excretions, poisonous chemicals from the plants they eat and shed exoskeletons. A. deusta tend to hold the shield over them like an umbrella. 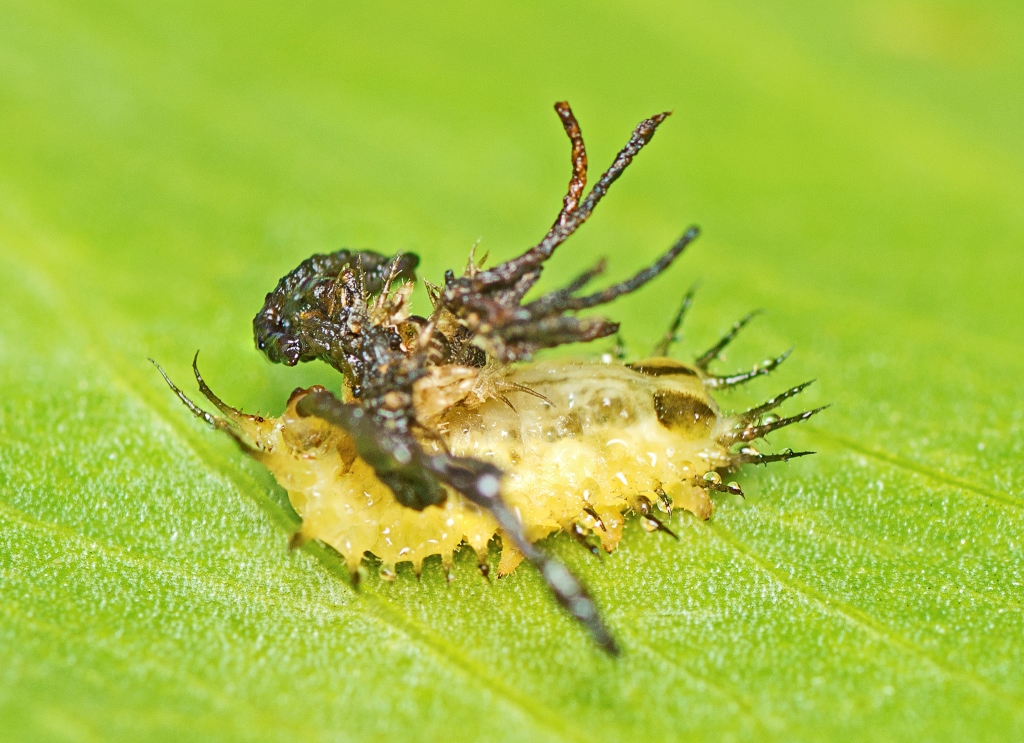 From mimicry to defence to camouflage. I’ve been finding these transparent and green cockroaches on the underside of leaves in the local rainforest. They are in the genus Mediastinia and they have exoskeletons so transparent that from certain angles it simply doesn’t show up in photographs. 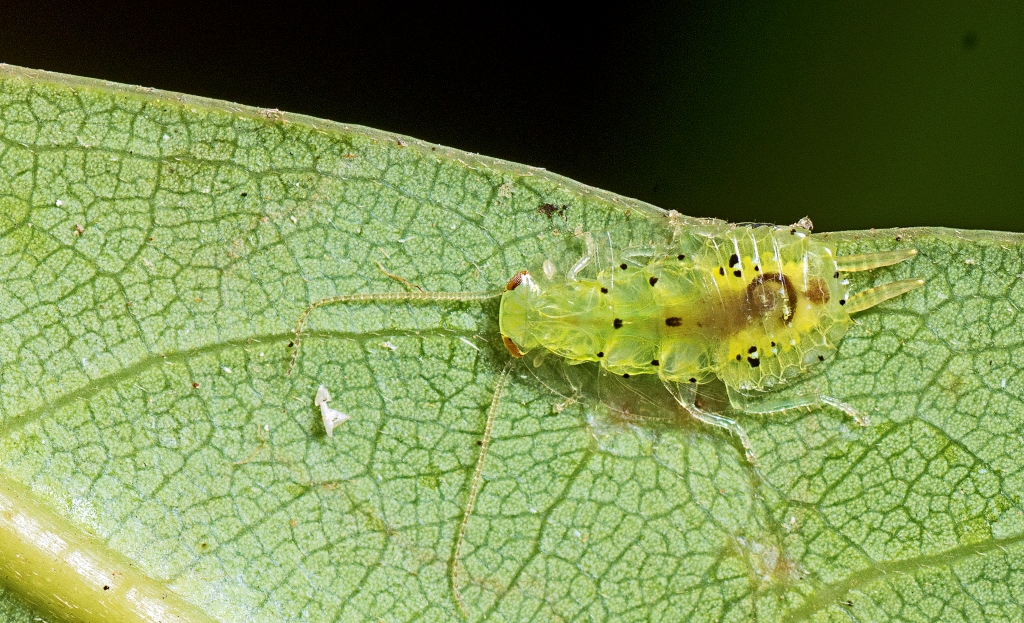 Also in the rainforest I found a tiny Pygmy Grasshopper in the family Tetrigidae. They’re only a couple of millimetres in length as adults and well camouflaged as  a piece of moss that they’re very easy to miss. 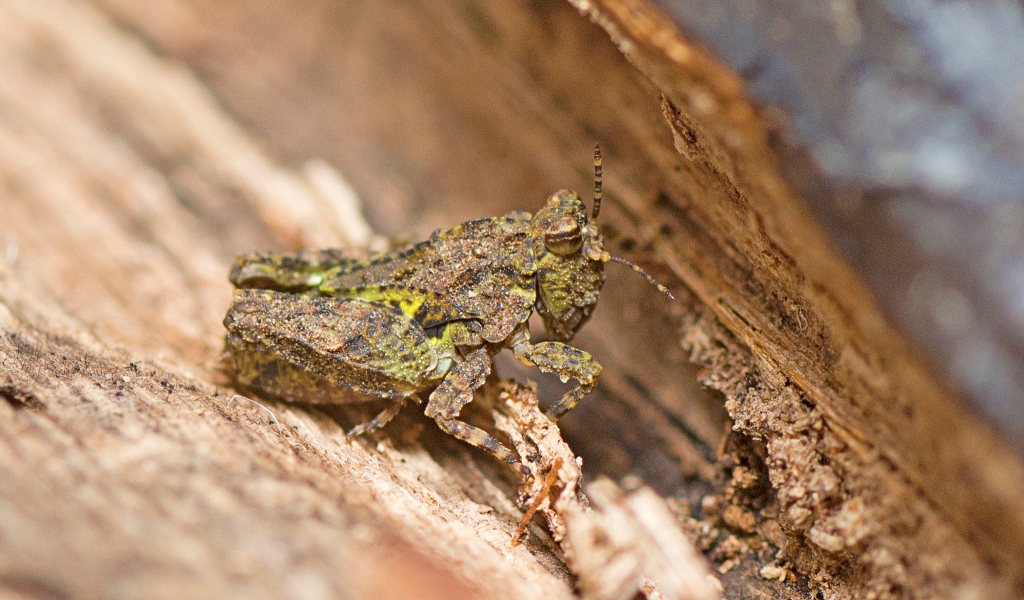 But of course no stings, or camouflage or mimicry can defend an insect from fungal parasites like this Ophiocordyceps that I found after having consuded what looks like some sort of Hoverfly. 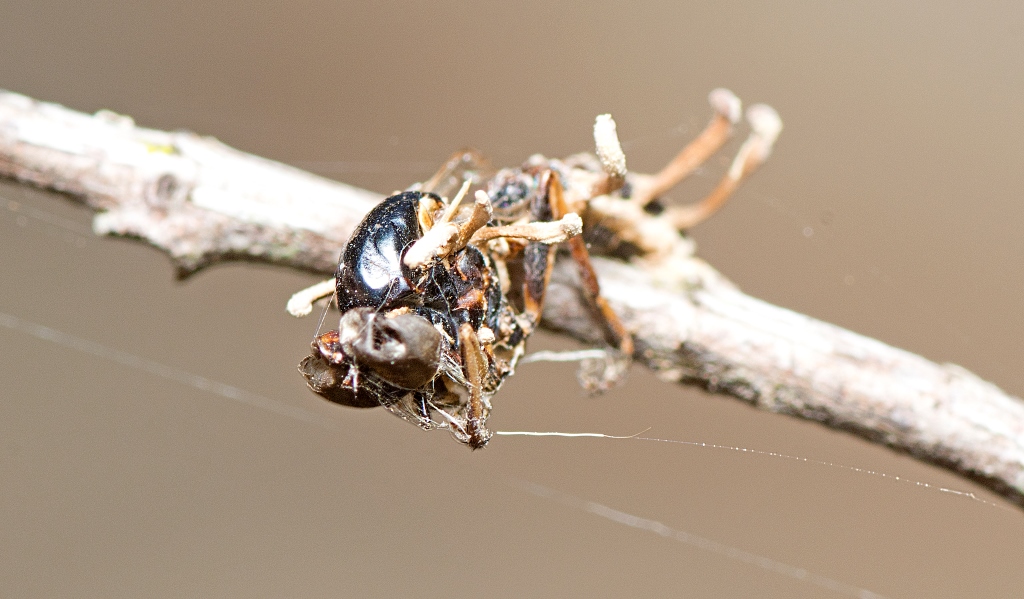 On the climate apocalypse front, the fires are still raging with no real end in sight as we come to the hottest end of the traditional fire season (note these fires have been burning since September), the latest estimates are that 10 million hectares have burned leading to the loss of an estimated one billion “animals” (and you know they’re only talking about the vertebrates). While these fires and the loss of lives, homes and forests is rightly the big news, as bad as they are, the devastation from unusually warm ocean temperatures on tropical reef systems is even worse.

That story is only just coming out now but we’ll be counting the cost for decades to come. On my way to my favourite little rainforest patch I was horrified at the state of the surrounding forest. This moist eucalyptus forest looked like it had already been burned but you could see that it wasn’t. It was that every young tree was dead from drought and all the older trees had dead limbs and drooping dry foliage. This kind of forest has rare and low intensity understory burns and it protects the rainforest that it surrounds; however in these conditions one can easily imagine a fire getting into the dry crowns and wiping out everything.

All we can do is cross our fingers and wait for rains and hoping nothing sets it off beforehand.