A new report in Nature displays what is said to be the oldest “figurative artwork” in the world—work that is representational of real-world items rather than just abstract figures.  It shows not only hunting scenes, but “therianthropes” (human-animal hybrid figures), and also is the oldest “narrative art”, as it’s said to depict a hunting scene.  (Click on screenshot below to read the article, and you can find the pdf here).  How old is it? Uranium/thorium dating places a minimum age of the cave paintings at 43,900 years, making it older than the oldest nonrepresentational art: a disk dated at 40,800 years from Spain.

The authors start the paper with a history of “oldest” art, which I’ll reproduce below (I have photos of the stuff that I’ve put in bold):

Previous uranium-series (U-series) dating has suggested that the oldest known figurative cave art is found in Indonesia. Up until now, the earliest minimum U-series ages for representative artworks reflect dates of 40 ka for a naturalistic painting of a wild bovid in Kalimantan and, from south Sulawesi, 35.4 ka for a painting of a pig—possibly a female babirusa or young Sulawesi warty pig (Sus celebensis). Non-figurative rock art dated to 65 ka in Spain has been attributed to Neanderthals, but this claim has been questioned on various grounds. With a minimum age of 40.8 ka, the earliest dated art that is generally attributed to modern humans in Europe is an abstract ‘disc’ sign from the rock art site of El Castillo in Spain. Although animal motifs are abundant in the Pleistocene cave art of Indonesia and Europe, in both regions humans hunting fauna are very seldom depicted; composite human–animal figures are also uncommon. In Europe, images of lone animals that are seemingly impaled by projectiles are documented in art of Magdalenian cultures (dating to about 21–14 ka); however, the motifs that are regarded by some as spears or arrows are subject to varying interpretations In terms of parietal imagery, one of very few obvious narrative compositions is the famous scene from the shaft (or ‘well’) at Lascaux (France) (Extended Data Fig. 1). This Magdalenian rock art panel apparently depicts a bird-headed man being charged by a wounded bison. The shaft scene is the subject of considerable speculation, but some scholars believe it represents a real hunt; if this is the case, so far as we can ascertain this would be the oldest narrative composition that portrays a hunting scene in European art. The earliest image that is generally accepted to represent a therianthrope is the Löwenmensch (‘lion-man’) figurine, a 31.1-cm-tall mammoth-ivory statuette of an apparently part-human, part-lion creature from Hohlenstein–Stadel (Germany) (Extended Data Fig. 1). This artefact, which belongs to the early Aurignacian tradition (dating to about 40–39 ka), is regarded by some as the earliest evidence for the capacity to link the concepts of ‘animal’ and ‘person’ into a single abstract category. The Hohlenstein–Stadel figure also has a prominent role in scientific debates about the origins of religion, as it has been argued that the ability to imagine the existence of things that do not exist—including therianthropes—forms the basis for religious thought. In Kalimantan, U-series dating has shown that people began painting small anthropomorphic figures inside caves at least 14 ka, and perhaps as early as 21–20 ka—these figures are sometimes shown pursuing deer, but dates are not available for any of these scenes. To our knowledge, no unambiguous depictions of therianthropes have previously been identified in the early cave art of Kalimantan or Sulawesi.

Here are some pictures of the images put in bold in the text.  First, the abstract disks at El Castillo, dated to at least 40,800 years and the oldest art of any kind. There are also handprints made by blowing pigment around a hand, which really conjures up our ancient relatives as people. 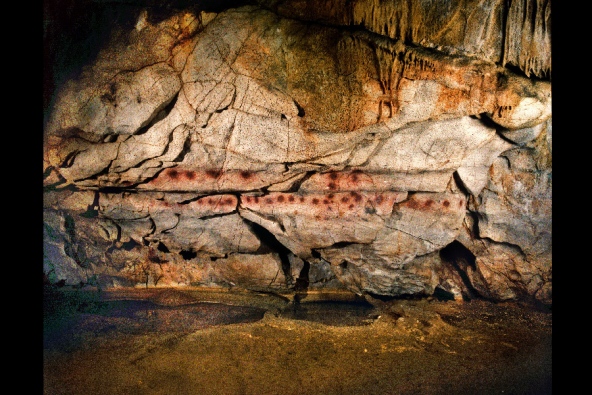 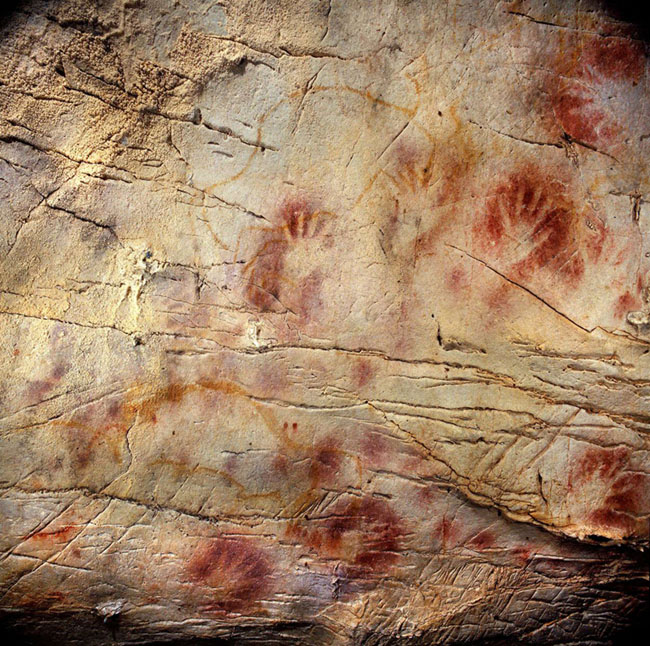 And here, from the supplementary data in the new Nature paper, are several other pieces of artwork mentioned above, including the Lascaux cave painting, which shows the bird-headed man (all captions are from the Nature paper).  The art at Lascaux is much younger: 21,000-14,000 years ago. You can also see the lion-man therianthope statue, which is about 39,000-40,000 years old, and is already quite sophisticated.

The new finds are from Sulawesi in Indonesia, with the location given below. The paintings are badly weathered (I presume they’ll find a way to protect them), but have also been marred by water seeping through the paintings and then mineralizing, forming calcium carbonate concretions called “coralloid speliotherms”, or “cave popcorn”. However, the fact that the paintings were later marred by mineral deposits also gives us a way to date them, since cave popcorn can be dated using decay rates of uranium into thorium.

So at last we get to the cave art in Sulawesi, which has been enhanced in the figure below, and then given representations in b).  In c) and d) you can see enlargements showing what the authors take to be human/animal hybrids, and then a very large anoa, which is a midget buffalo found only on Sulawesi. I’ve put a picture of one species of anoa below the figure.

A lowland anoa (Bubalus depressicornis). There’s also a mountain anoa, and it’s not clear which species the painting above represents—or whether it’s a third species that’s now extinct. Both living species are endangered by hunting and habitat loss. These little creatures are only about a meter high at the shoulder. 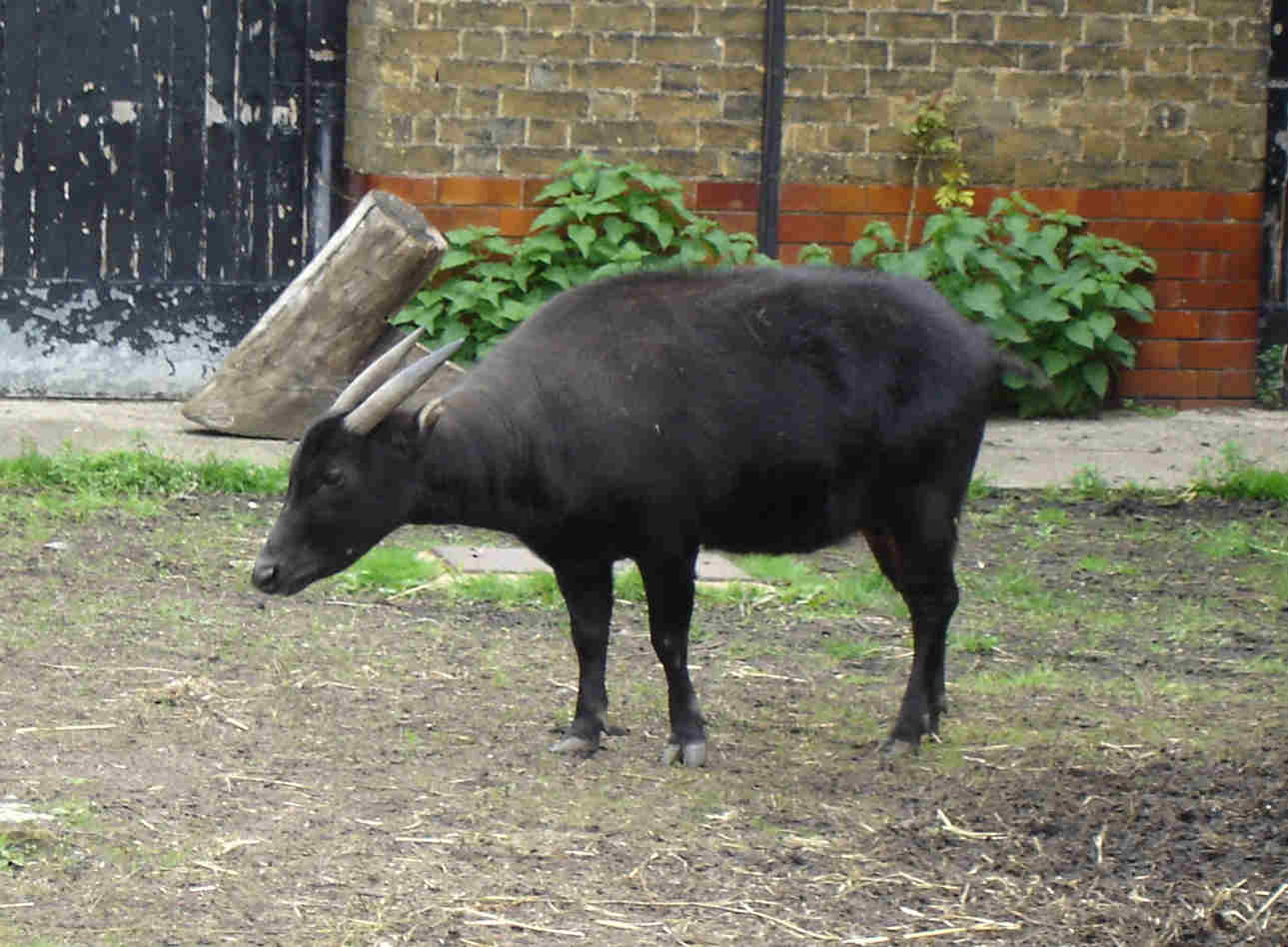 The authors conclude that this is the world’s oldest known figurative art and also the oldest narrative art, which implies that humans were already engaged in storytelling 43,000 years ago. The authors consider storytelling important because “the ability to invent fictional stories may have been the last and most crucial stage in the evolutionary history of human language and the development of modern patterns of cognition.” Of course, they’re speculating here.

Finally, these are also the oldest therianthropes: almost twice as old as the Lacaux “birdman” and several millennia older than the lion-headed figure which held the previous record.  At the end, of course, there’s the requisite speculation about spirituality, as the authors say the scene “hints at the deeply rooted symbolism of the human-animal bond and predator-prey relationships in the spiritual beliefs, narrative traditions, and image-making practices of our species.” Well, again that’s more speculation. But it does suggest that about 43,000 years ago, H. sapiens was already thinking in numinous terms, for what else would a therianthrope represent?