A long report in yesterday’s Washington Post details some allegedly nefarious behavior of the Mormon Church: accumulating donations of members to the tune of billions of dollars, saying that they’re tax-empt funds, and then not using them for charitable purposes as that money accumulated interest and capital gains, which violates the law. You can read about it at the link below (click on screenshot). If you hit a paywall, try judicious inquiry.

This resembles the latest accusation that a Vatican Fund, Peter’s Pence, has also accumulated lots of money for charitable work, but then used almost all of it to reduce the Vatican’s debt (see my post here).

The new accusations come from a Mormon, David Nielson, who manages a portfolio into which the Mormon Church’s excess donations come. As you may know, the Church is extremely wealthy because Mormons tithe 10% of their yearly income to the Church, and many Mormons have a substantial income. The tithes amount to about $7 billion per year, and only $6 billion of that is need to cover the Church’s operating costs. The rest has been sequestered over the years in a fund called “Ensign Peak Advisors,” for which Nielson works as a senior portfolio manager.  The accumulated dosh in that account is over $100 billion, and of course grows because it’s invested.

The problem is that none of that money appears to have been used for charitable purposes, even though it should be given that Ensign is registered as a not-for-profit organization. In fact, the only disbursements that appear to have been made from Ensign were illegal: to two for-profit concerns. All of this is illegal. As the article reports:

Philip Hackney, a former IRS official who teaches tax law at the University of Pittsburgh, said the complaint raised a “legitimate concern” about whether the church’s investment arm deserved its tax-exempt status.

“If you have a charity that simply amasses a war chest year after year and does not spend any money for charity purposes, that does not meet the requirements of tax law,” Hackney said in an interview. Hackney, who served in the IRS chief counsel’s office, has been retained by The Post to analyze the whistleblower documents.

IRS rules dictate that a nonprofit organization must carry out charitable activity that is “commensurate in scope with its financial resources” to maintain its tax-exempt status. No threshold for this test is specified, and the agency instead considers examples case by case.

Now this isn’t all for sure, as Nielson appears to have provided no evidence for lack of charitable spending beyond his claim that no money went for that purpose. However, there should be records if it was. And get this rationalization from other Mormons:

In a speech in March 2018, Caussé linked the church’s financial strategy to the “prophecies about the last days.” Just as the church maintains grain silos and emergency warehouses, Caussé said, so it “also methodically follows the practice of setting aside a portion of its revenues each year to prepare for any possible future needs.”

According to the complaint, Ensign’s president, Roger Clarke, has told others that the amassed funds would be used in the event of the second coming of Christ. Clarke did not respond to an email seeking comment.

They’re going to wait a very long time for that! Besides not giving money from Ensign to the needy, the Church is also sitting on billions of dollars worth of real estate. And, unlike other nonprofit organizations, churches are exempt from having to give public reports of their income and assets. That seems to be an unwarranted and probably unconstitutional coddling of religion. (In contrast, the Post reports the value of the Bill and Melinda Gates Foundation’s holdings at $47.8 billion—less than half of Ensign’s money alone).

So how was the money used? Nielsen says that $2 billion went to “bail out a church-run insurance company and a shopping mall in Salt Lake City that was a joint venture between the church and a major real estate company.”

You can read the rest for yourself, and of course caveat emptor since this is still playing out. (Also, Nielsen, as a tax whistleblower, gets 10% of what the government recovers in unpaid taxes.)

Just remember that the Mormons, like the Catholic Church, seem to be hoarding money designated for charity and using it for other purposes—or waiting to dispense it when Jesus returns. (Does this mean that all the saved are going to get Ferraris?). But when Jesus comes back—I’m just joking! He ain’t gonna!)—both the Vatican and the Church of Jesus Christ of Latter-Day Saints will have some ‘splaing to do. There may even be lashing by the Savior in Temple Square!

Ensign remains mum, as does the Church itself. We’ll see how far a Republican government (if we still have one in 13 months) will go in prosecuting a church. 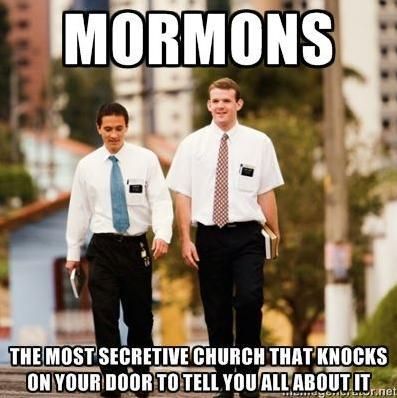 23 thoughts on “Mormons reportedly stockpile $100 billion in donations, not using them for the designated charitable work but to buttress businesses”