I don’t have a paper copy of the New York Times (I’m an e-subscriber, and unsure whether I’ll renew), but, according to the Freedom From Religion Foundation (FFRF), their organization ran a full-page ad in today’s paper attacking the pervasive theocracy of the Trump administration. (They weren’t 100% sure it would run today.) The FFRF also put the ad on their own website, so I’ll reproduce it below along with an excerpt from their description.

I’m not sure what full-page ads cost in the New York Times, but they’re not cheap; you can see some of the rates here, though they’re hard to decipher. Given that this ad is in color, I’d say it cost in the ballpark of $200,000. But the FFRF isn’t poor—it’s one of the best-funded of all secular organizations, and on top of these ads they give out lots of cash awards and scholarships.

Here’s a bit of the FFRF’s explanation of the ad, along with the name of the artist:

The Freedom From Religion Foundation is running a dramatic full-page ad this week in The New York Times warning that a theocratic deluge could drown us. The ad will likely appear on Thursday, Dec. 4.

The striking ad has a stark depiction of the Statue of Liberty holding a cross while large waves labeled “Theocracy” surround her and overwhelm buildings. The image is drawn by Pulitzer Prize-winning cartoonist Steve Benson. “Help stem the theocratic tidal wave,” FFRF’s ad urges.

. . . “Our constitutional right to a secular government has never before been in danger of being so engulfed,” says Annie Laurie Gaylor, FFRF co-president. “We will fight to the utmost to ensure that reason and our secular Constitution endure.”

The ad includes a coupon at the bottom enabling people to become members or supporters of the state/church watchdog organization. The Freedom From Religion Foundation, a national nontheistic group with more than 30,000 members and several chapters all over the country, has received a four-star rating plus a “perfect score” this year from Charity Navigator as a carefully run nonprofit.

Yes, the organization is run as a tight ship. You should consider joining it (I’m a member as well as on the honorary board of directors); it’s only $40 per year and you get a fat monthly newsletter with all kinds of good stuff in it. And of course you’re helping a secular group that really fights hard to keep the church-state wall in place, and has had numerous legal successes. To join, go here. 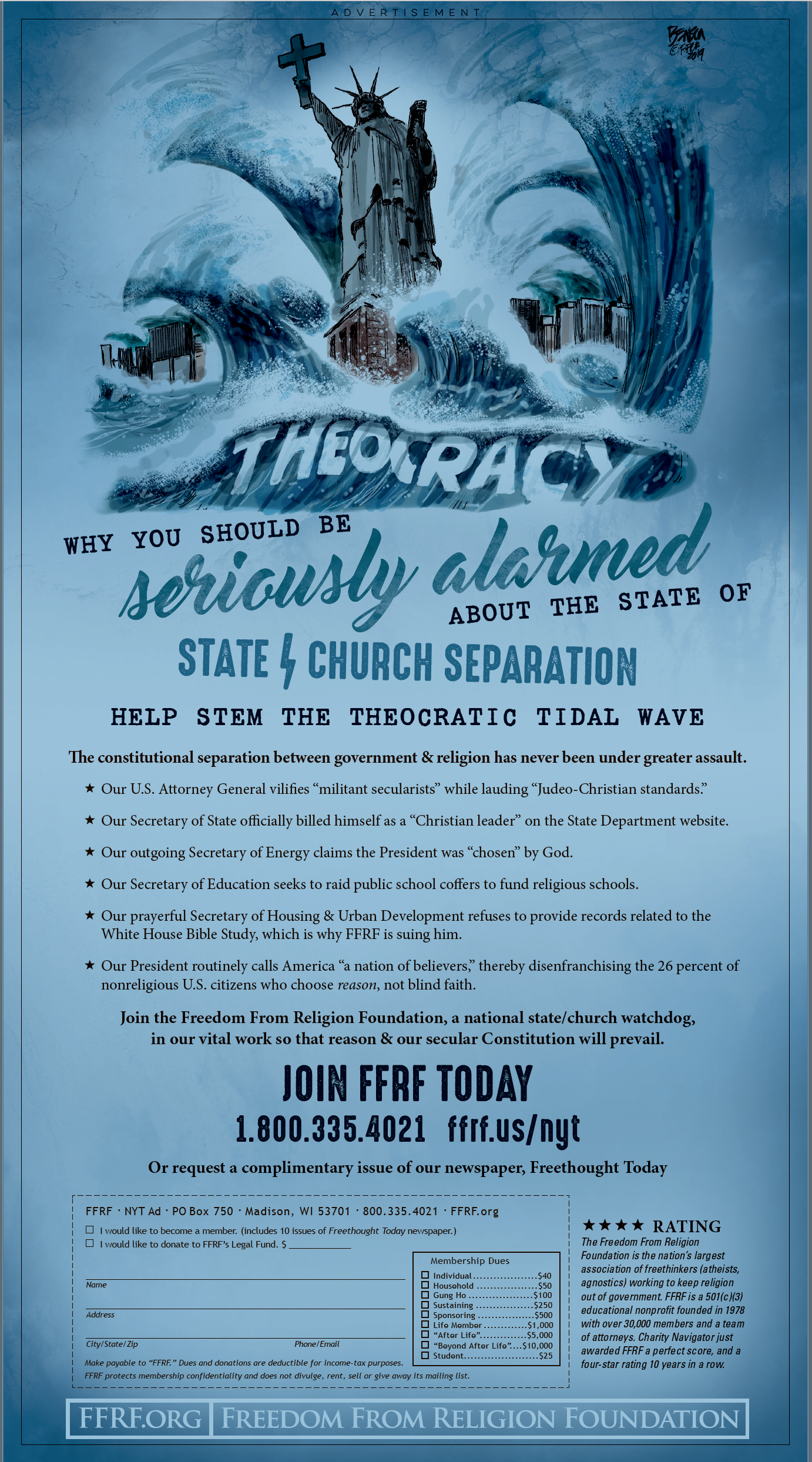