From the Vanderbilt Hustler, the student newspaper of that Nashville, Tennessee university, we learn that the demonized people subject to being deplatformed by the Left is—you guessed it—Steve Pinker. Read the article below, which describes a petition the students are putting together demanding that Pinker get booted from an upcoming panel on global issues. The reason is given in the sub-headline: Pinker’s “history of ties to Jeffrey Epstein.”

To be sure, there are only about 120 signatures on the petition, and the chances that it will work seem quite low. What’s important is that Pinker is increasingly regarded by the woke as ideologically polluted, regardless of the value of his books and works, because he had a tangential connection with Epstein—a connection that doesn’t implicate Pinker in any misconduct, sexual or otherwise.

Here’s a small excerpt from the Vanderbilt piece:

As of Sunday, Dec. 1, the petition had garnered around 120 signatures. Duncan said a faculty member approached her and suggested that she should spread the word because they thought Vanderbilt administration would listen to students more than a faculty member. [JAC: I wonder who that faculty member is, and why he/she remain anonymous.]

Pinker, a Harvard professor, is scheduled to be featured in a panel event Dec. 3 alongside journalist Carl Zimmer and Vanderbilt professor and author Amanda Little. The panel is set to be moderated by political science professor Jon Meacham. The topic of the panel is “2020 and Beyond: Tackling Global Issues in the Decades to Come.”

The petition goes on to indict Pinker for flying on Epstein’s plane and being photographed next to him, and mentions some construals of legal language that Pinker gave to his friend Alan Dershowitz, who was on Epstein’s defense team:

The petition against Pinker reads: “He has appeared in Epstein’s flight logs among other prominent figures, the same flight that would travel to places across the world, including the island where Epstein allegedly hosted a sex-trafficking ring involving minors. Pinker was also photographed with Epstein in 2014, well after Epstein received his sentence and became a notorious sex offender.”

It also discusses allegations that Pinker gave Epstein advice on how to manipulate the language of a law regarding usage of the internet to lure minors across state lines for sexual abuse, which Epstein was accused of violating in 2006.

The petition acknowledges that Pinker denies association with Epstein but states that the connection cannot be dismissed as a coincidence in good conscience.

“A truly upstanding individual would not agree to manipulate language to downplay the laws surrounding prostitution of minors, and would not casually end up in a photograph with a convicted sex offender years later,” the petition reads.

. . . “My main point is that these connections are too much to be coincidental,” Duncan said. “The theme of the lecture series is ‘caring and respect’ – someone that we look up to for those values would not have coincidentally been involved like this with such a notorious sex offender as Jeffrey Epstein. True role models needs to be intentional about their actions.”

Too much to be coincidental? Is Duncan then implying that Pinker somehow overlooks or excuses Epstein’s behavior, or is a raging misogynist? What we see here is a complete lack of understanding of, and forgiveness for, the only action of Pinker that could possibly be faulted: helping Dershowitz with Epstein’s defense.

But I too am guilty in that way, for I was on O. J. Simpson’s defense team when he was tried for murdering Nicole Brown Simpson and Ron Goldman. (I helped analyze the DNA evidence against Simpson.) In fact, I surely did at least as much for Simpson as Pinker did for Epstein.

Now Simpson was found not guilty, but I believe he was indeed the murderer. I helped because I wanted to ensure that the government could not use shoddy DNA evidence to convict somebody, even if that somebody was a famous person accused of an egregious crime. And of course Simpson later was found culpable in a civil trial, and, even later, went to jail for nine years for, among other crimes, armed robbery. Simpson is not someone you’d want to associate with.

But I did, in the same way Pinker did with Epstein, though I never met O. J. nor was photographed with him. I therefore tell people, “If you’re going to incriminate Pinker because he helped in a small way with Epstein’s defense, please incriminate and deplatform me as well because I helped in a larger way with O. J. Simpson’s defense.” Well, do it! I’m waiting for my first deplatforming!

In fact, Pinker explained his association with Epstein in a July 12 post on this website. Read it for yourself; here’s an excerpt:

The annoying irony is that I could never stand the guy, never took research funding from him, and always tried to keep my distance. Friends and colleagues described him to me as a quantitative genius and a scientific sophisticate, and they invited me to salons and coffee klatches at which he held court. But I found him to be a kibitzer and a dilettante — he would abruptly change the subject ADD style, dismiss an observation with an adolescent wisecrack, and privilege his own intuitions over systematic data. I think the dislike was mutual—according to a friend, he “voted me off the island,” presumably because he was sick of me trying to keep the conversation on track and correcting him when he shot off his mouth on topics he knew nothing about. But Epstein had insinuated himself with so many people I intersected with (Alan Dershowitz, Martin Nowak, John Brockman, Steve Kosslyn, Lawrence Krauss) and so many institutions he helped fund (Harvard’s Program in Evolutionary Dynamics, ASU’s Origins Project, even Harvard Hillel) that I often ended up at the same place with him. (Most of these gatherings were prior to the revelation of his sex crimes, such as the 2002 plane trip to TED with Dawkins, Dennett, the Brockmans, and others, but Krauss’s Origins Project Meeting came after he served his sentence.) Since I was often the most recognizable person in the room, someone would snap a picture; some of them resurfaced this past week, circulated by people who disagree with me on various topics and apparently believe that the photos are effective arguments.

(Here’s one of the photos, which is included in the Vanderbilt petition, designed to provoke a feeling of guilt by association. Pinker explained it above. 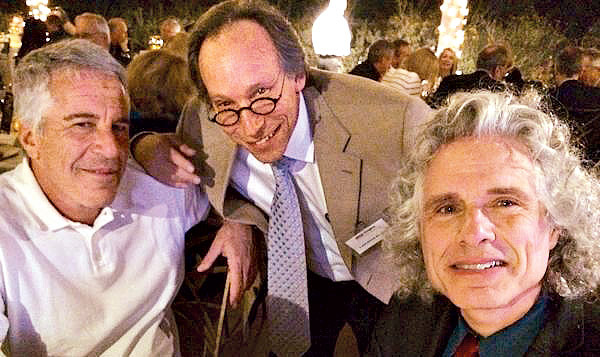 A bit more from Steve’s statement:

In the interests of full disclosure, there was another connection. Alan Dershowitz and I are friends and colleagues, and we taught a course together at Harvard. He often asks me questions about syntax and semantics of laws, most recently the impeachment statute. While he was representing Epstein, he asked me about the natural interpretation of one of the relevant laws, and I offered my opinion; this was cited in a court document. I did it as a favor to a friend and colleague, not as a paid expert witness, but I now regret that I did so. And needless to say I find Epstein’s behavior reprehensible.

What we see here is a group of students so unforgiving, so bent on punishing those who have violated their impossibly difficult standards of purity, that they must deplatform someone who’s already satisfactorily (to me) explained his “association” with Epstein and who’s added he regrets helping Dershowitz.  The overweening message of the Vanderbilt action is that Social Justice Warriors—and I mean by that people who pretend to effect social justice but only pound a keyboard and flaunt their virtue—lack the nuance to discriminate between enablers of Epstein’s behavior and Pinker’s far more innocuous behavior. These people are authoritarians, and that’s why I call this the Authoritarian Left.

What do they hope to accomplish by keeping Pinker off the panel?