If you didn’t already know it, the Templeton foundations, including the John Templeton Foundation (henceforth JTF), give tons of money not only to fund science, but also the kind of science that is friendly to religion, like work on consciousness and free will. They also, of course, give money to “advancing” theology and to religious causes, and the JTF awards the annual $1 million Templeton Prize to an individual who “has made an exceptional contribution to affirming life’s spiritual dimension, whether through insight, discovery, or practical works”. I’ve been a strong critic of both the Foundation and its Prize, and I was pleased to find that,  in the Wikipedia article on the Prize, I’m quoted along with critics like Richard Dawkins and the late Harry Kroto:

. . . American biologist Jerry Coyne described the Templeton Prize’s aim as being “to give credibility to religion by blurring its well-demarcated border with science … [and] goes to scientists who are either religious themselves or say nice things about religion”.

(See the source of that quote, a Guardian article, here.) I also wrote my own article in the Guardian after Martin Rees got the Templeton Prize. In that piece I noted that the JTF gave an “epiphany prize” to the odious and anti-Semitic move “The Passion of the Christ.”

But Sir John, whose bequest was aimed largely at funding projects showing how the discoveries of science actually bring us closer to understanding God, was not just a diehard Presbyterian but also a diehard capitalist. After all, he earned his billion-dollar fortune as the manager of a profitable family of mutual funds. To that end, the JTF also funds projects promoting capitalism and free enterprise. (There are three foundations funded by Sir John’s inheritance: the John Templeton Foundation,the Templeton World Charity Foundation, and the Templeton Religious Trust.)

It’s no surprise, then, that today’s Guardian describes how Templeton—most likely the John Templeton Foundation, identified as one of the donating organizations—has been caught out giving millions of dollars to right-wing British groups, funding causes like a hard Brexit, the privatization of schools and of UK medical care, and low taxes and light regulation of business. This should have implications for the pack of scientists who take money from the JTF.

Click on the screenshot below to read the news. The photo below the headline is of Sir John himself: 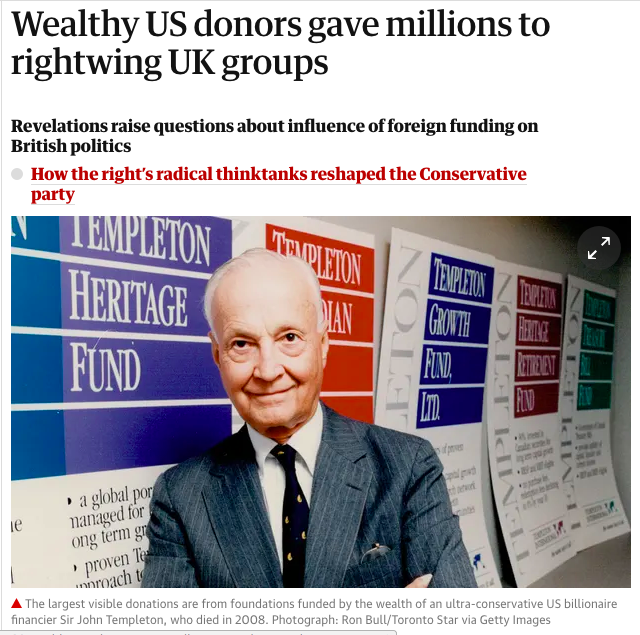 And some excerpts from the article:

Eleven wealthy American donors who have given a total of more than $3.7m (£2.86m) to rightwing UK groups in the past five years have been identified, raising questions about the influence of foreign funding on British politics.

The donations have been given to four British thinktanks that have been vocal in the debate about Brexit and the shape of the UK’s future trade with the EU, and an organisation that claims to be an independent grassroots campaign representing ordinary British taxpayers.

Many of the donors have also given significant sums of money to a series of like-minded American groups which, like the British organisations, promote a free market agenda of low tax, lightly regulated business and privatisation of public services.

. . .The five British groups and their supporters have raised at least $6.8m in the past five years from US benefactors. However, the identities of many donors remain unknown because their donations cannot be traced in public records.

. . . The Guardian has compiled a partial list of American donors to the British groups since 2014 by analysing thousands of pages of US tax filings that have been published, and other public declarations. The most recent available year for these filings is 2017.

. . . The largest visible donations, amounting to $3.3m, have been given to three British groups by foundations funded by the wealth of an ultra-conservative US billionaire financier, Sir John Templeton, who died in 2008.

One of the Templeton foundations last year gave a donation worth $1.5m to the Legatum Institute. Legatum said the foundation supported its research on the impact of economic openness on global growth and prosperity.

. . . Legatum was required last year by the Charity Commission to remove from its website a report advocating a hard Brexit, which was judged to be too partisan. Charities are required by law to be politically neutral. It stopped its work on Brexit last year.

Another Templeton foundation gave $1.4m to the Adam Smith Institute between 2015 and 2017. The donation was used to make a film about Magna Carta and to fund scholarships. The existence of the donation was made public on the websites of the institute and the John Templeton Foundation.

The Adam Smith Institute has been one of a group of influential rightwing thinktanks credited with kickstarting some of the most controversial privatisations of the Thatcher and Major governments. It received donations from four other US donors.

The John Templeton Foundation also gave $497,000 to the Institute of Economic Affairs (IEA), another prominent British thinktank, between 2014 and 2017.

The money has been given to researching alternatives to the NHS for an ageing population and to fund work on inspiring young people to become supporters of free markets, according to the foundation.

Now, as you know if you’re a regular here, many reputable American scientists and social scientists take money from the JTF; this Guardian piece gives only a partial list. Would those same scientists continue to take money knowing that their JTF funder also supports right-wing causes?

The answer: probably yes. Funding for science is hard to find these days; Templeton’s conditions for giving money aren’t too stringent; and Templeton regularly gives lots of money—often with grants exceeding a million dollars. Once your nose is in the trough gulping down JTF’s swill, it’s too easy to keep it there.