Yesterday was a “Plan B” day because we were unable to make the scheduled landing on Petermann Island because of ice accumulation ashore. But the clever captain and expedition leaders gave us a Plan B that was really cool: they wedged into pack ice and we got out and clambered about on it. Later we also visited a Ukrainian research station where we got a tour, visited their vodka bar, and observed the hundreds of penguins living around the station. More on that bit tomorrow.

The ship’s map shows the sturdy Roald Amundsen heading this morning toward Cuverville Island, where we hope to make a landing. Wikipedia notes this:

The island has been identified as an Important Bird Area (IBA) by BirdLife International because it supports a breeding colony of about 6500 pairs of gentoo penguins, the largest for this species on the Antarctic Peninsula. Other birds nesting at the site include southern giant petrels and Antarctic shags. 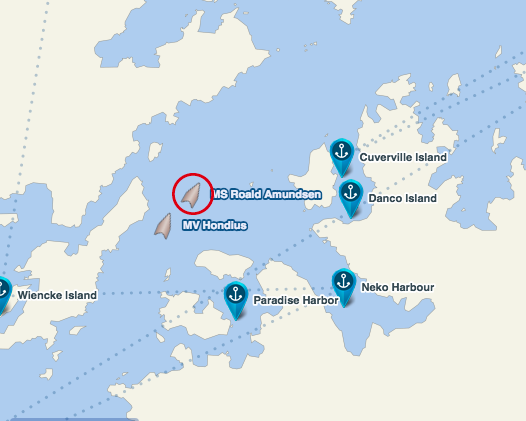 A zoomed-out view. We’re a ways down the Peninsula: 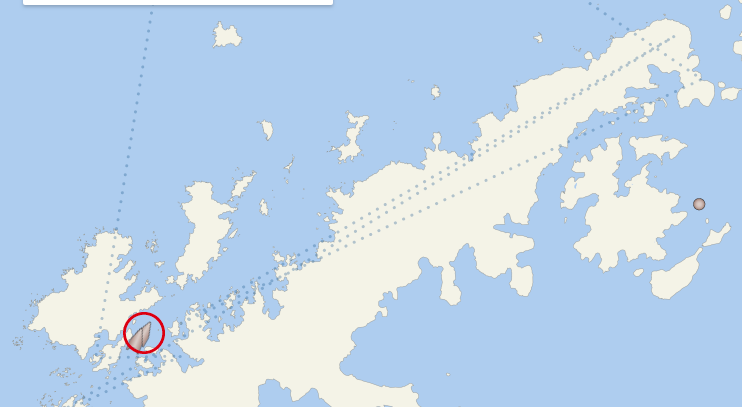 As I write this at 6:30 a.m. today, the ship’s live Panomax Camera (follow along with us!) shows what I see in my cabin on the port side: the sun rising over the Peninsula as we head north, with some overcast weather but sun beginning to peep through.  A few small icebergs bob lazily on the waves. 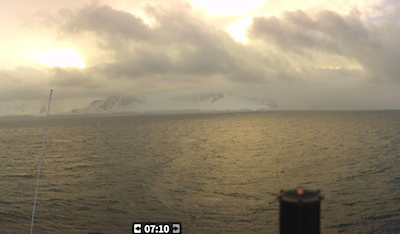 The night before last we were moored in the Errera Channel, a lovely place to chill—literally and figuratively—and wallow in the embrace of a bay surrounded by towering snow-capped mountains. Yesterday we made our way through the Lemaire Channel, a very narrow strait that was also stunningly beautiful. As Wikipedia notes:

Lemaire Channel is a strait off Antarctica, between Kiev Peninsula in the mainland’s Graham Land and Booth Island. Nicknamed “Kodak Gap” by some, it is one of the top tourist destinations in Antarctica; steep cliffs hem in the iceberg-filled passage, which is 11 km long and just 1,600 metres wide at its narrowest point.

It was first seen by the German expedition of 1873-74, but not traversed until December 1898, when the Belgica of the Belgian Antarctic Expedition passed through. Expedition leader Adrien de Gerlache named it for Charles Lemaire (1863-1925), a Belgian explorer of the Congo.

The channel has since become a standard part of the itinerary for cruising in Antarctica; not only is it scenic, but the protected waters are usually as still as a lake, a rare occurrence in the storm-wracked southern seas, and the north-south traverse delivers vessels close to Petermann Island for landings. The principal difficulty is that icebergs may fill the channel, especially in early season, obliging a ship to backtrack and go around the outside of Booth Island to reach Petermann.

And yes, the channel was full of ice, but not so much that we couldn’t plow through the thin layer and circumvent the bergs: 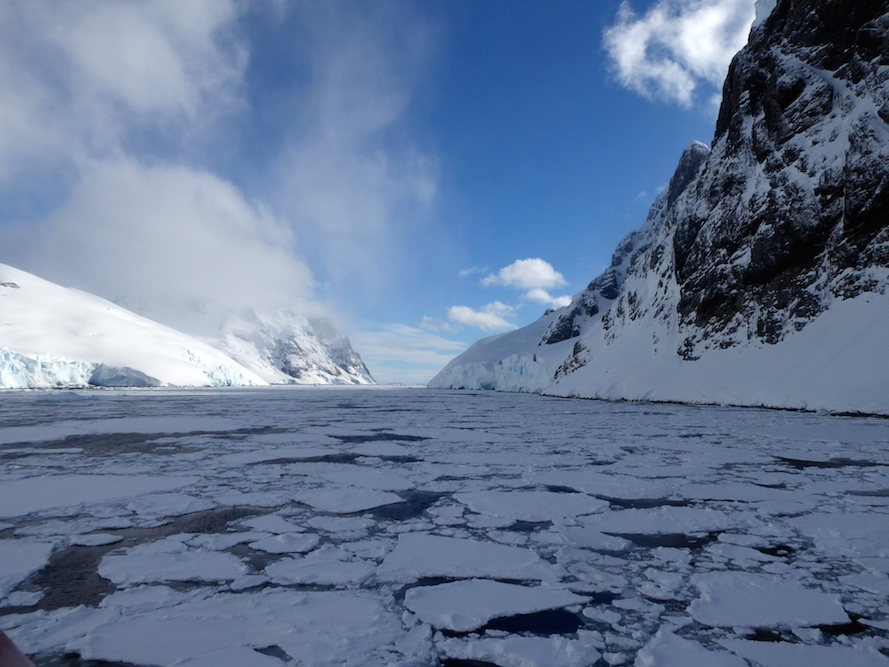 Our wake as we jammed through the ice: 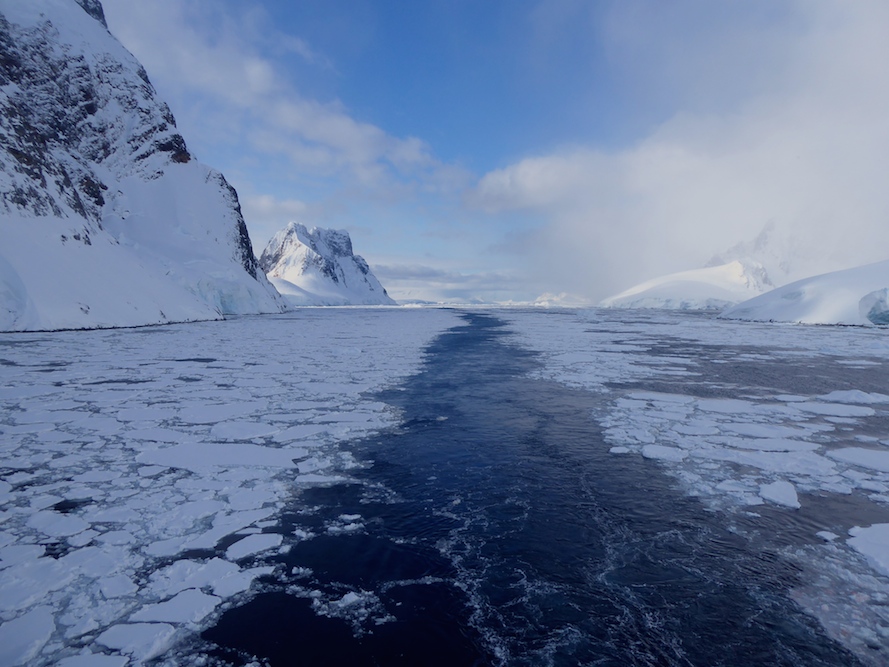 A view to the side as we plied the narrowest part of the Lemaire Channel: 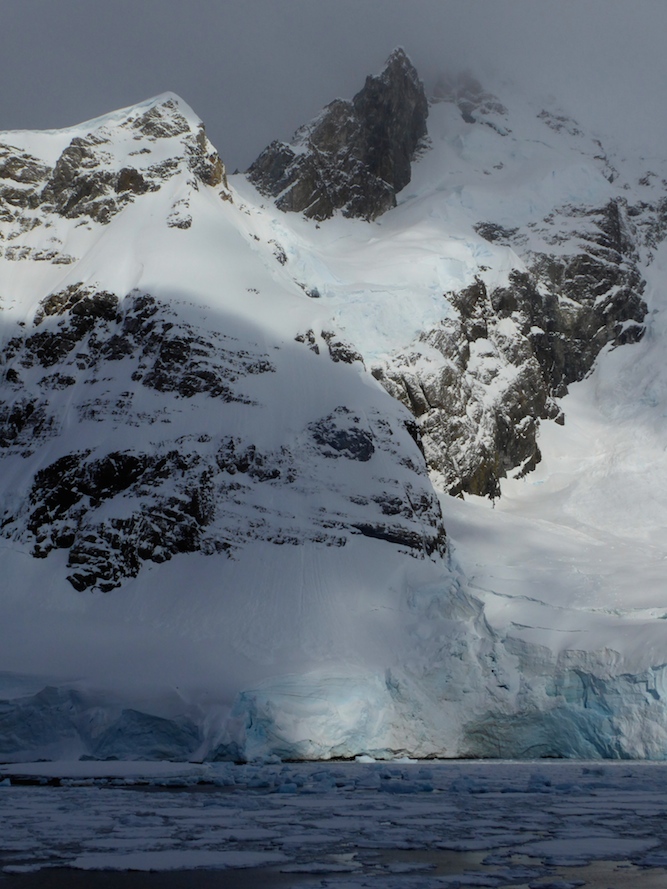 We stopped at one point to admire the mountains on our flanks. When I was taking photos, Andrea, the expedition’s photographer, pointed out to me that the peaks on the mountain beside us were breaking up the sun into beams. Note at the center: 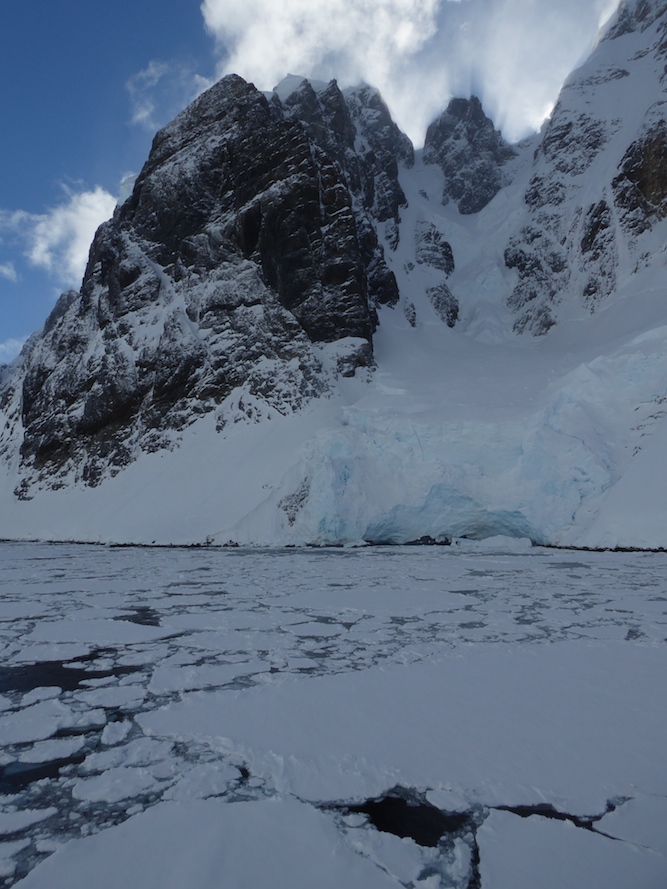 So I zeroed in on the peak and photographed this phenomenon (next two photos). I’m sure readers will explain to me how this happens. I don’t think it has to do with the clouds, because I also saw it years ago in the Himalayas when there were no clouds.

(I reduced the exposure a bit for these two photos.) 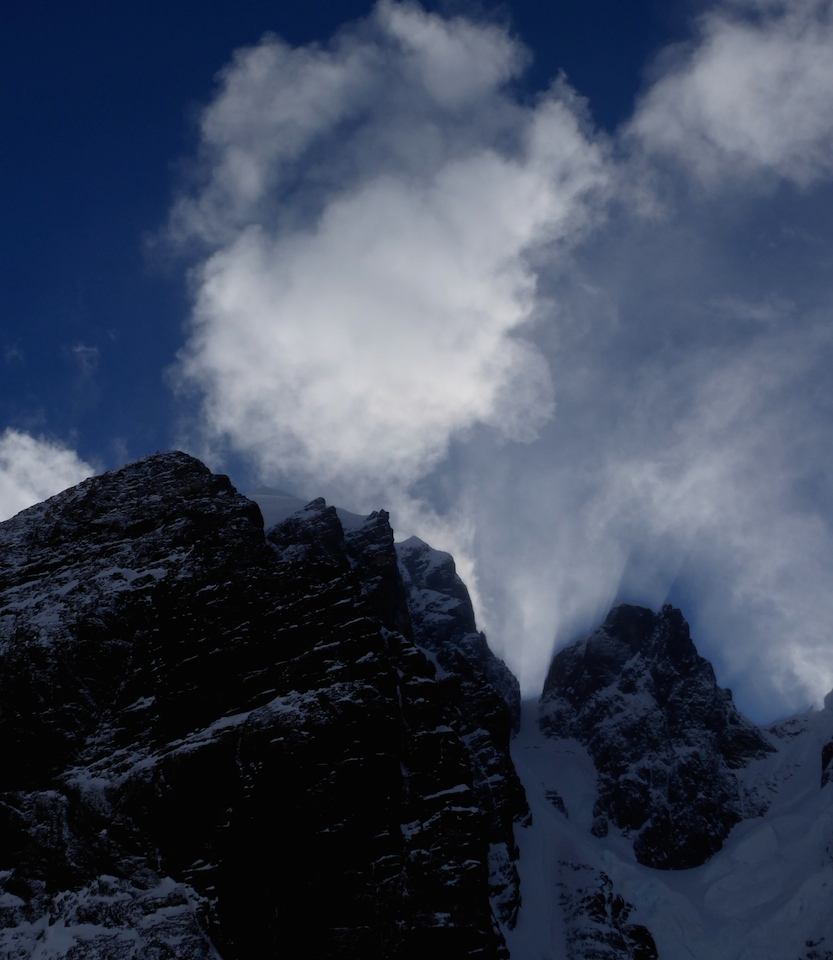 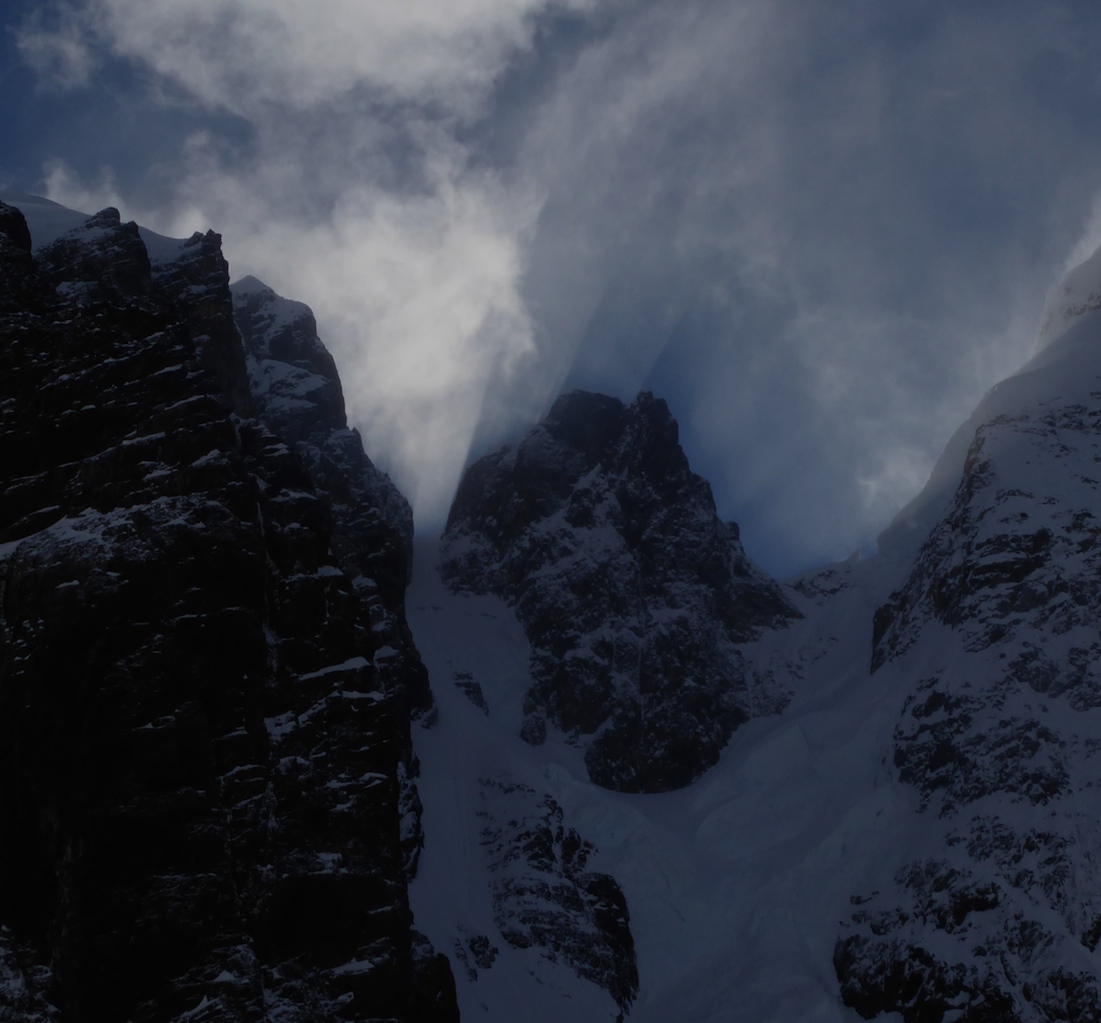 As I went to bed on Monday evening at a bit before 10 pm, this was the view through my cabin window. The water was calm and glassy: 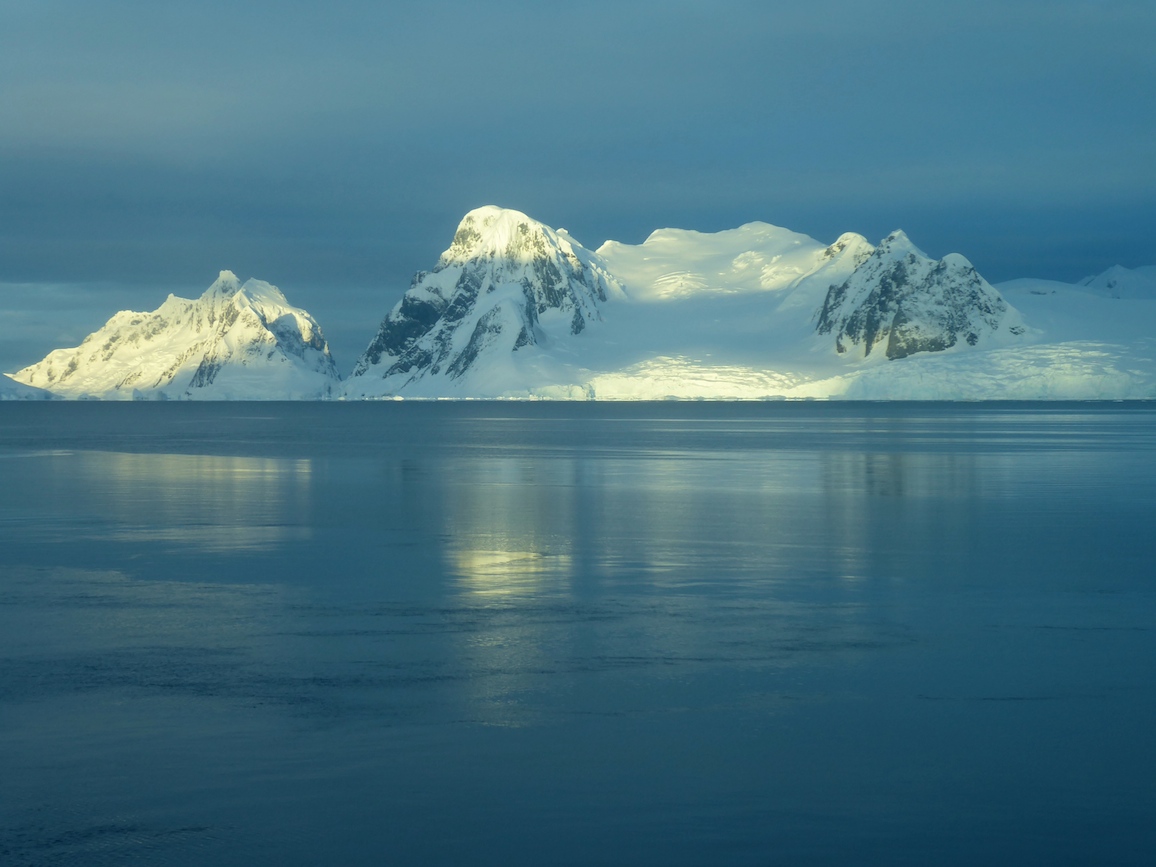 In the morning we were moored near Petermann Island, and this was the view from my porthole (which is actually a largish window). There was a weird cubical iceberg out there! We got a closer view later in the day, which I’ll show in tomorrow’s post. 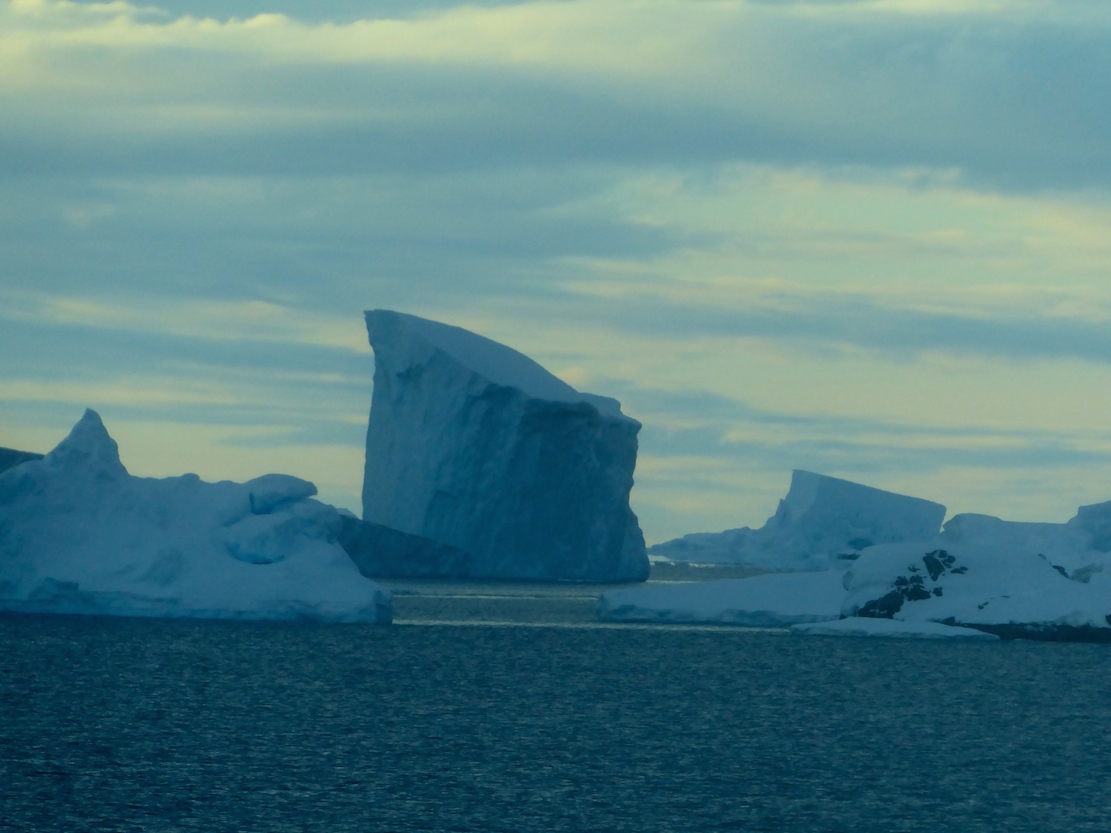 As I said, yesterday’s goal was to reach Petermann Island, described as a “popular tourist destination”, and do a landing today. Unfortunately, that didn’t happen because of the ice.

The island has an unused a refuge hut built by Argentina in 1955, but, as we steamed by, the Captain announced that we couldn’t land because of windblown ice accumulation near shore, and so they were formulating “plan B”. I could only watch helplessly as we passed by the refuge hut, which appeared to be surrounded by Adelie penguins (it was hard to tell in this zoomed-in view through my window). Adelies live on Petermann, and I much wanted to see them, but there was no chance yesterday morning: 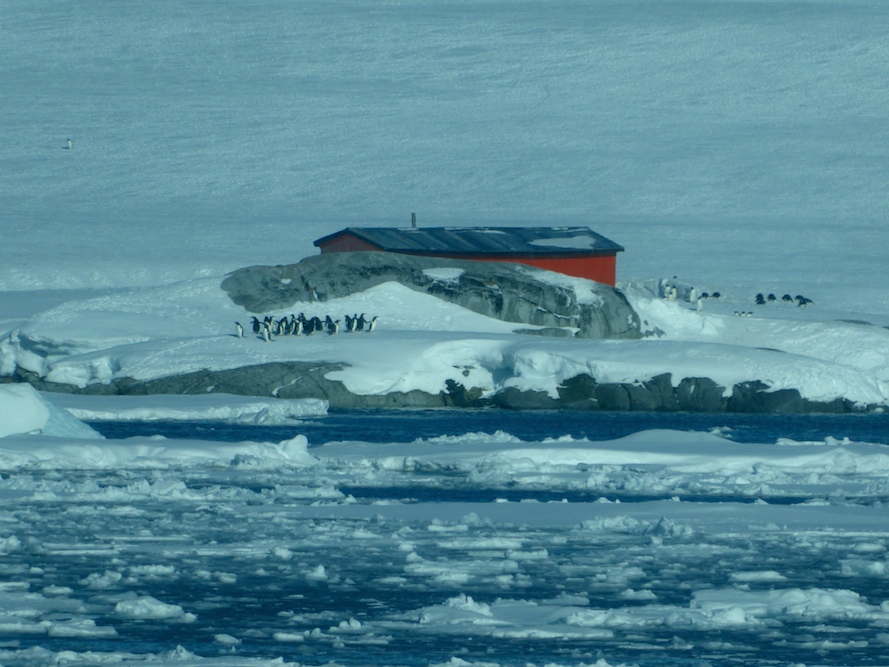 As we headed south, the Captain announced Plan B: we had been invited to visit Vernadsky Research Base, but first he was going to wedge the ship into pack ice, and the expedition team would go out and determine if the ice was thick enough to walk on. Such pack-ice walks are rare: I overheard one worker on this ship say that he’d been to the Antarctic over forty times, and had never set foot on the pack ice.

And so, with much crunching, the Captain slowly steamed into the thick ice and stopped. This was a panoramic view to our front.  That’s pack ice everywhere, which will be water a little later in the season.

The view from the bow: 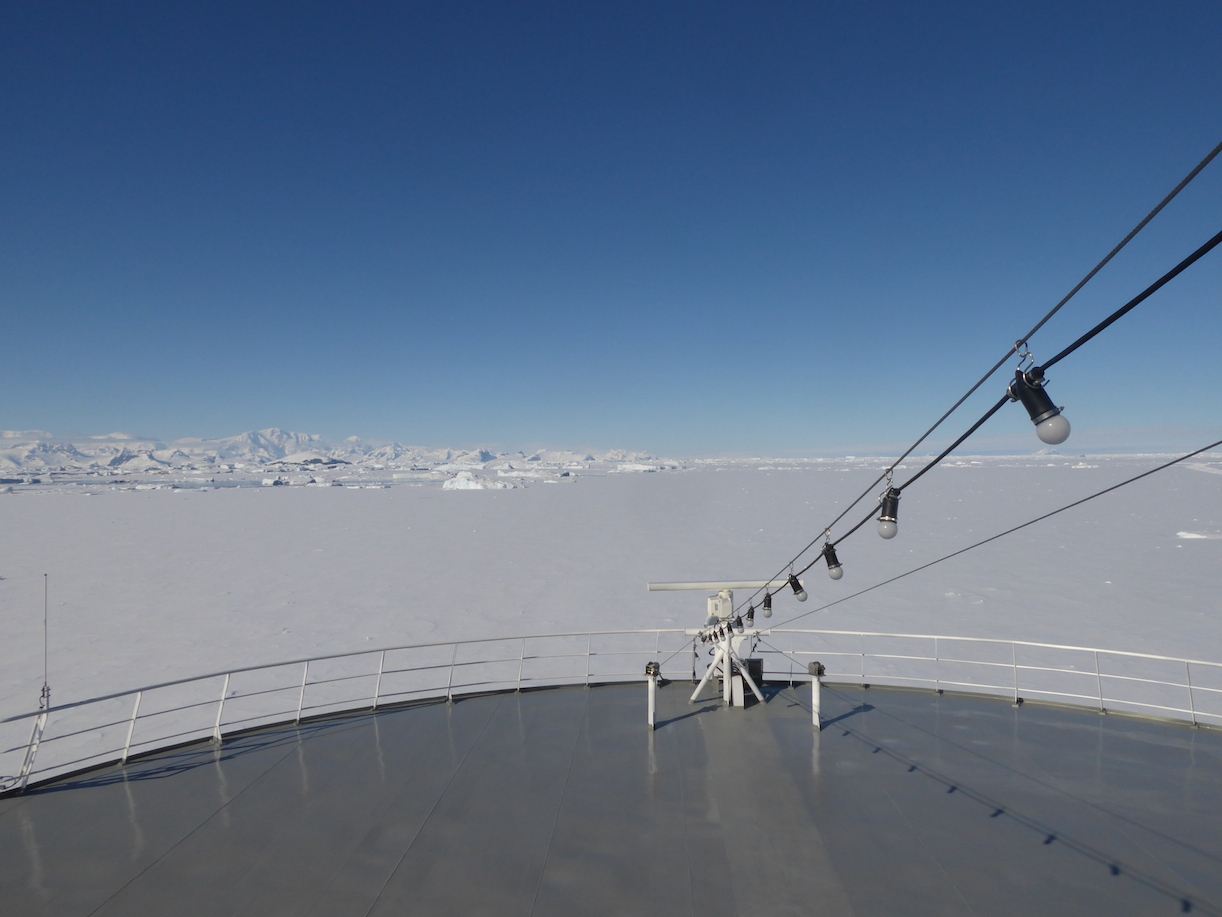 The view from the stern, showing our trail through the ice: 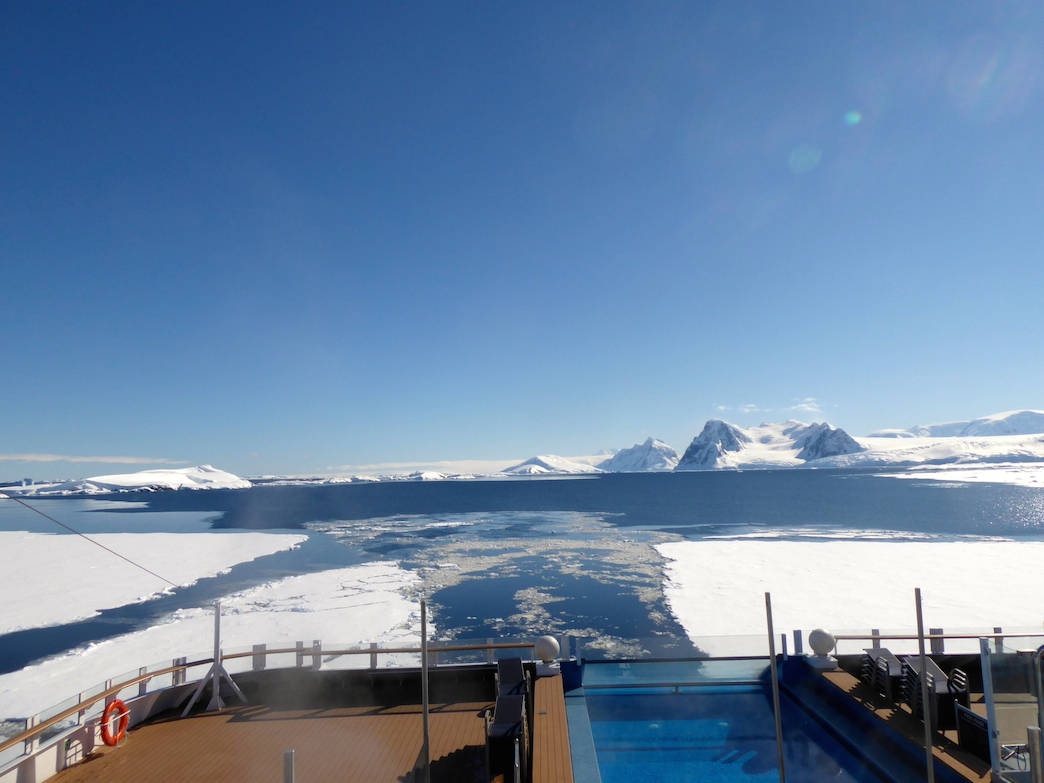 Another panorama. Ice, ice, everywhere, nor any drop to drink!

As we waited hopefully, they lowered the gangway and the intrepid Expedition Team members went onto the ice to see if it was thick enough to walk on without plunging into the frigid water. They used a calibrated ice-measuring screw to drill through and measure its thickness. 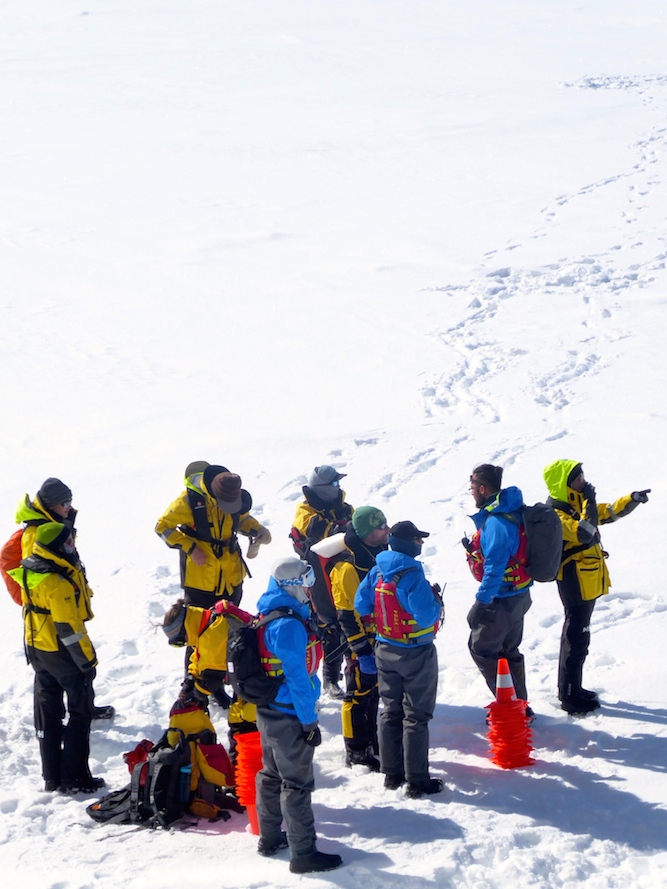 Success! The screw, the Captain told me later, showed that there was about 85 cm of ice (2.7 feet), and so we were allowed to clamber onto it. The ship is designed to go through ice as thick as one meter. 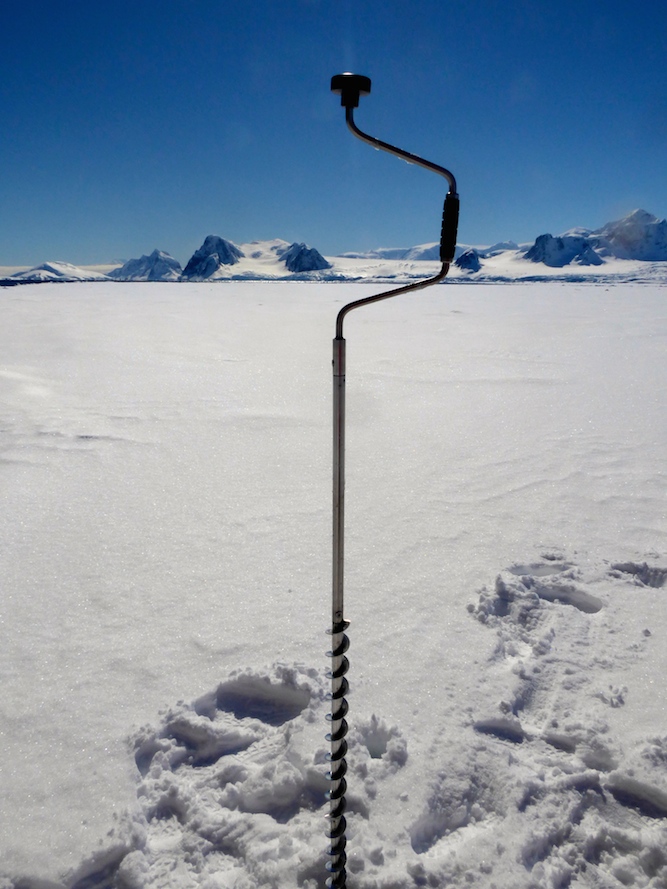 The ship’s bow embedded in the ice: 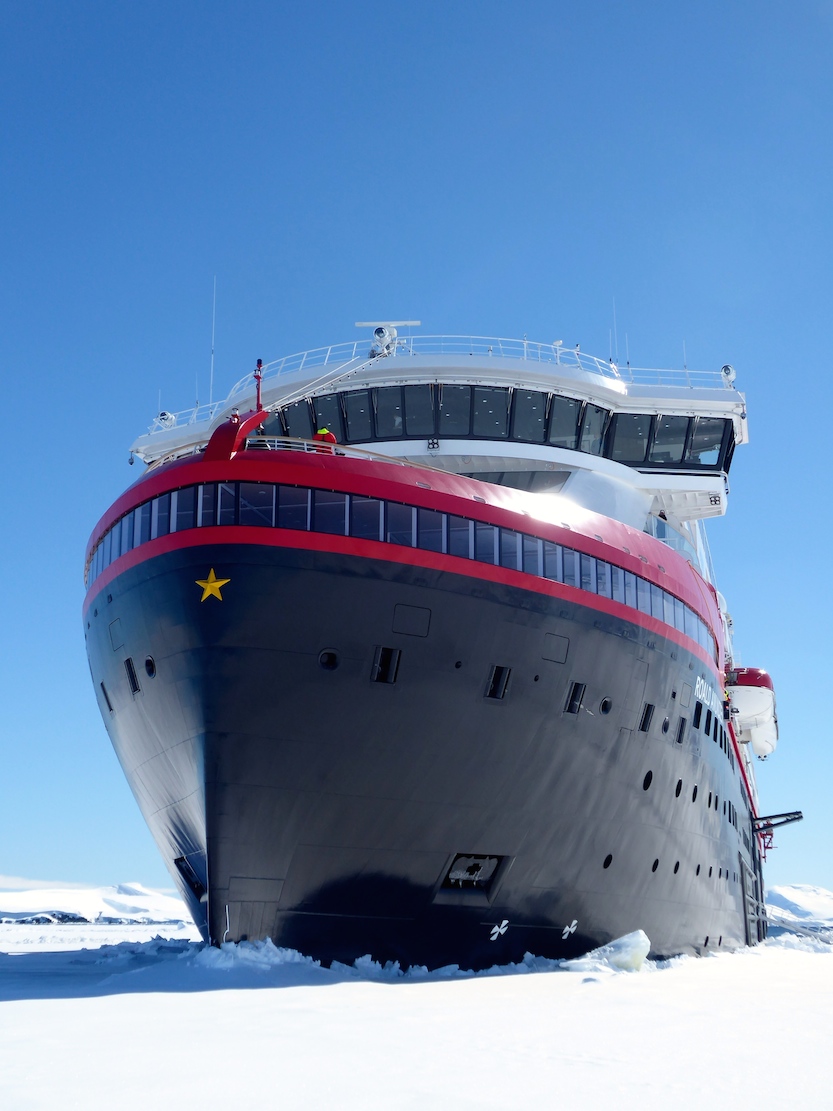 The passengers going ashore. We had to wear life jackets in case we fell through a thin spot, and they allowed only 30 people on the ice at once. 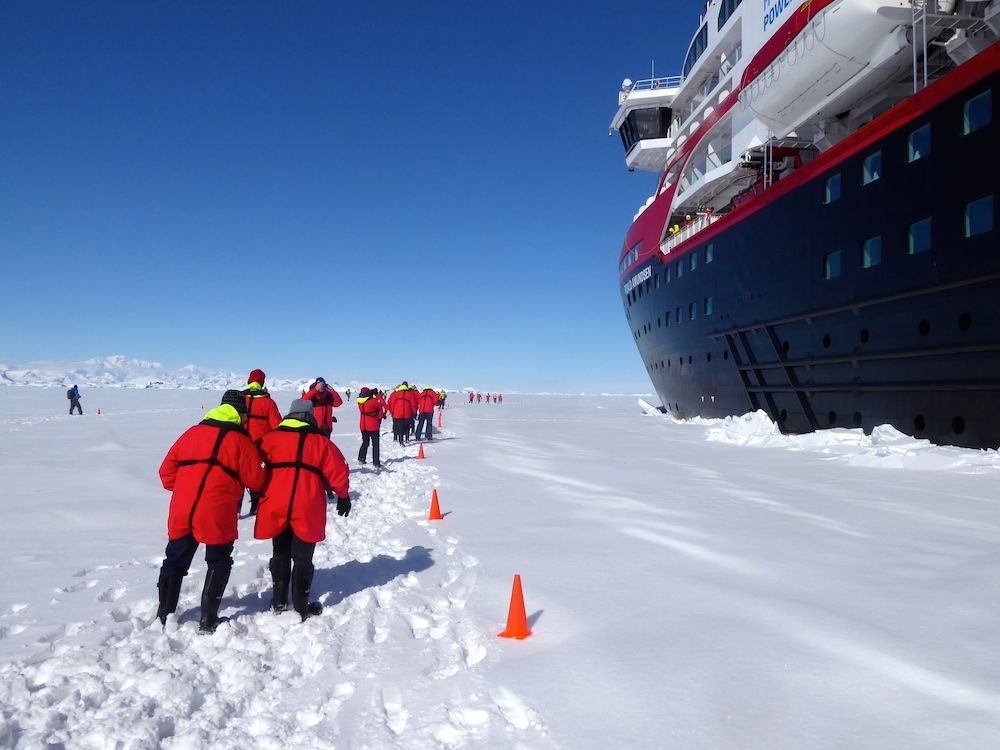 One of my rare “selfies”—actually, it was taken by a friend on the Expedition Team, as I wanted a picture of me standing on pack ice.

I’m wearing a Chicago White Sox cap (I forgot to bring a cold-weather hat). When I got off the ship, one Team member said, “That’s a gangsta hat!” I said, “What do you mean?” “Well,” she replied, “It says ‘Sex'”. But it doesn’t: it says “Sox” in black embroidery that is hard to read, and could easily be taken for “Sex”. Now I’m worried that I’ll be me-tooed! 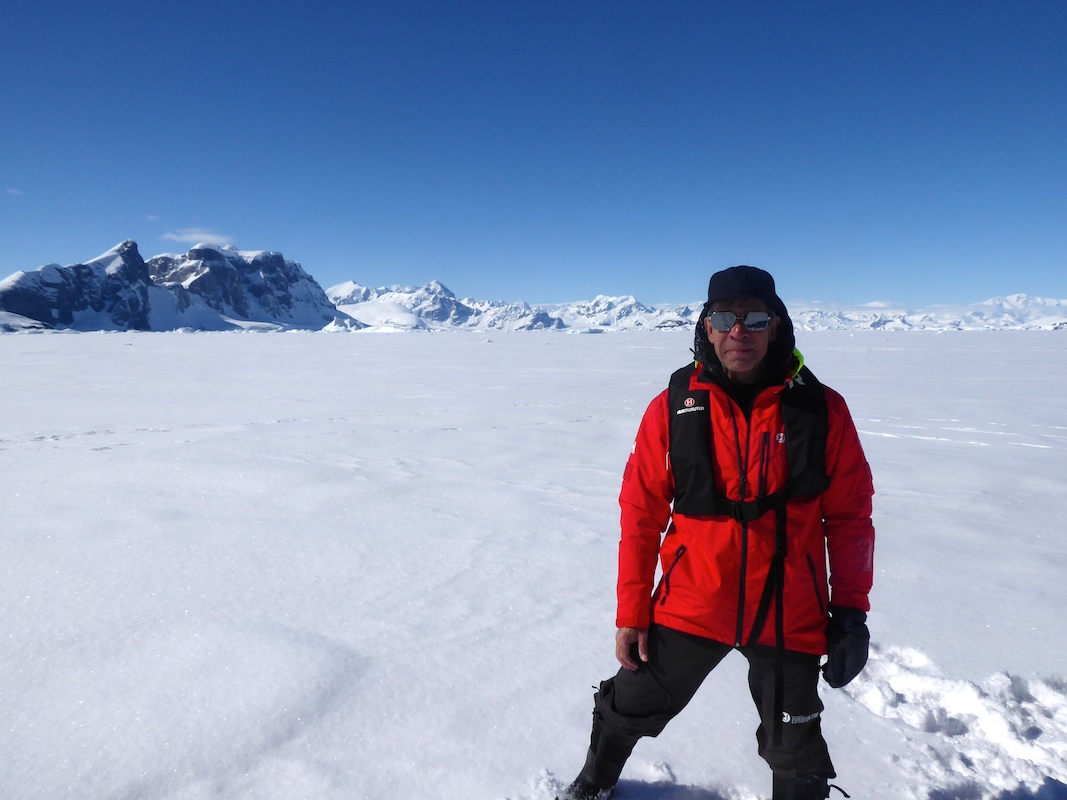 We also had a magical moment, but only a few people saw it. When I was standing at the end of our permitted walkway (demarcated by orange cones), I suddenly saw three black specks approaching us from a distance. They were moving fast, and as they came closer I saw that they were three Adelie penguins (Pygoscelis adeliae) tobogganing towards us on the ice, moving on their bellies and pushing themselves along with their flippers. It was amazing how fast they came towards us: they can toboggan much faster than they can walk.

I tried to remove my gloves to make a video, but they were too fast: as they approached us, they took a gander and then turned around and quickly tobogganed away. I frantically snapped pictures with gloved hands, unable to see the viewfinder in the glare. But I was lucky, as I got two good pictures. The first one looks as if it’s dancing. 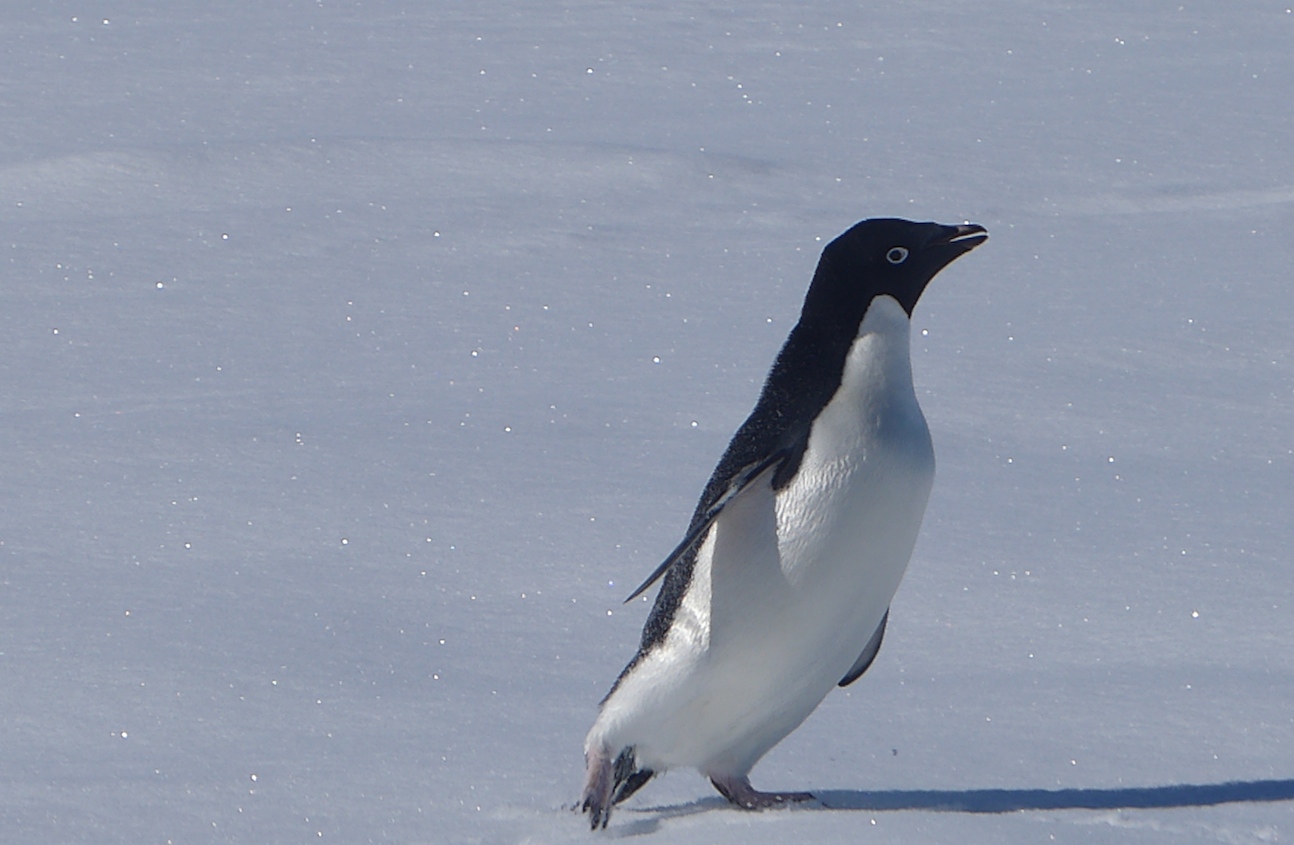 And then, turning tail (below), they were gone. It was an amazing thing to see, and almost everyone on the ice missed it. Adelies are, along with Emperors, the only penguins found solely on Antarctica.  They are also very small and, to my mind, the cutest of all penguins. Here’s what Wikipedia says of them:

“They are extraordinarily like children, these little people of the Antarctic world, either like children or like old men, full of their own importance.” George Murray Levick, a Royal Navy surgeon-lieutenant and scientist who also accompanied Scott, commented on displays of selfishness among the penguins during his surveying in the Antarctic: “At the place where they most often went in [the water], a long terrace of ice about six feet in height ran for some hundreds of yards along the edge of the water, and here, just as on the sea-ice, crowds would stand near the brink. When they had succeeded in pushing one of their number over, all would crane their necks over the edge, and when they saw the pioneer safe in the water, the rest followed.” [JAC: This is how the selfish beasts test for the presence of predatory leopard seals.]

As I relate in my lecture on the science of the Scott Expedition, Levick, an amateur ornithologist, studied Adelies for several weeks in 1912 at Cape Adare. He discovered all kinds of things that horrified a Victorian Brit: the males copulated with chicks, dead females, and other males, and masturbated as well, ejaculating on the ice. He was horrified by these displays of what he construed as homosexuality, necrophilia, incest, and sodomy, and took notes in transliterated Greek, which, he thought, nobody else could read. Levick never published these observations, which came to light only more than a century later. See my earlier post on how his prudishness impeded natural history here. 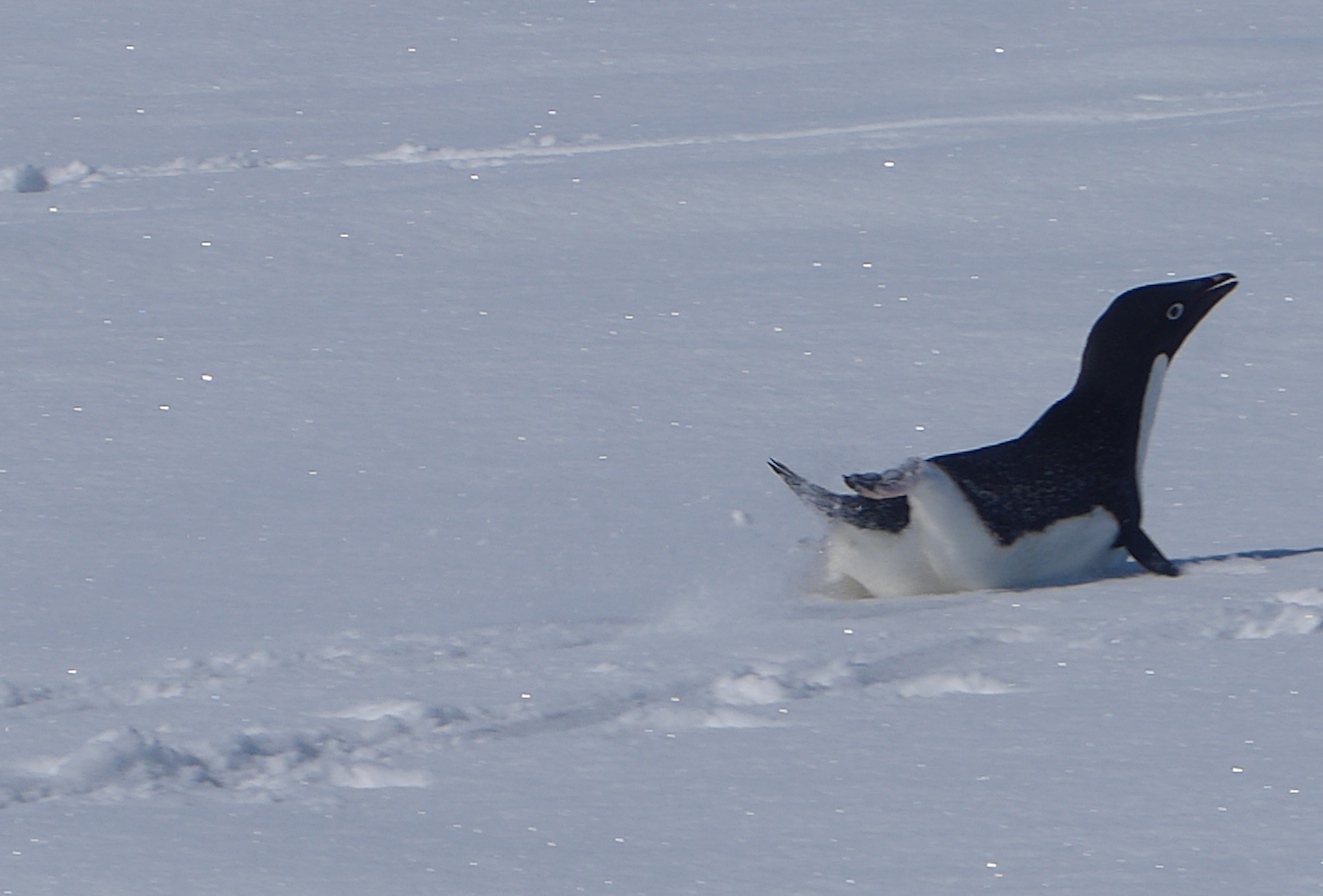 Paul, one of the leaders of the expedition team, is to the left, and the Captain to the right. I congratulated the Captain on sticking the landing, and asked him if it would be hard to get the ship out. He said it was dead easy: you just reverse the propellers and shimmy the rear of the boat from side to side until you make the exit a bit wider. Then you just travel backwards, which the Roald Amundsen can do because its propellers can be turned 360°. 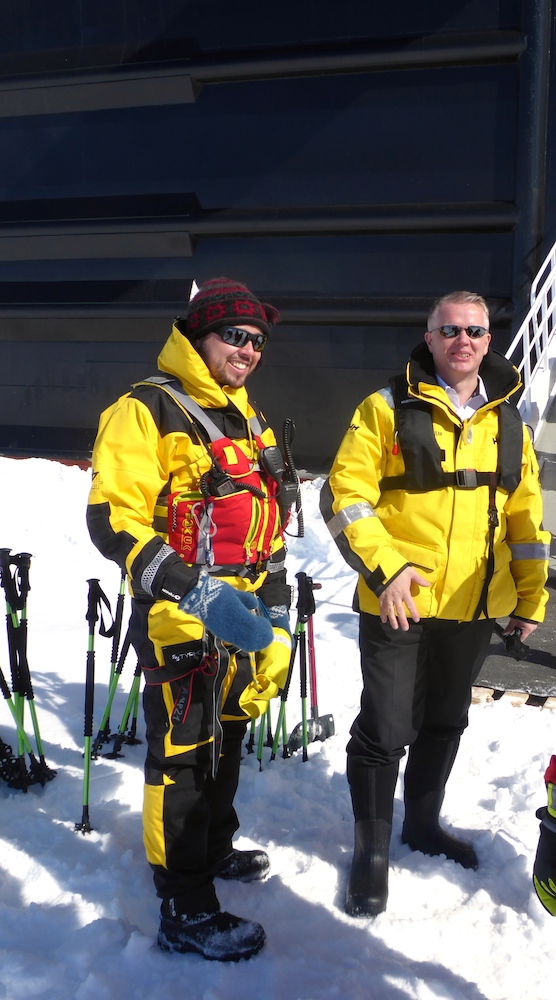 After a brisk walk on the pack ice, I had a bracing hot shower in the cabin. The view of the ice from my cabin window: 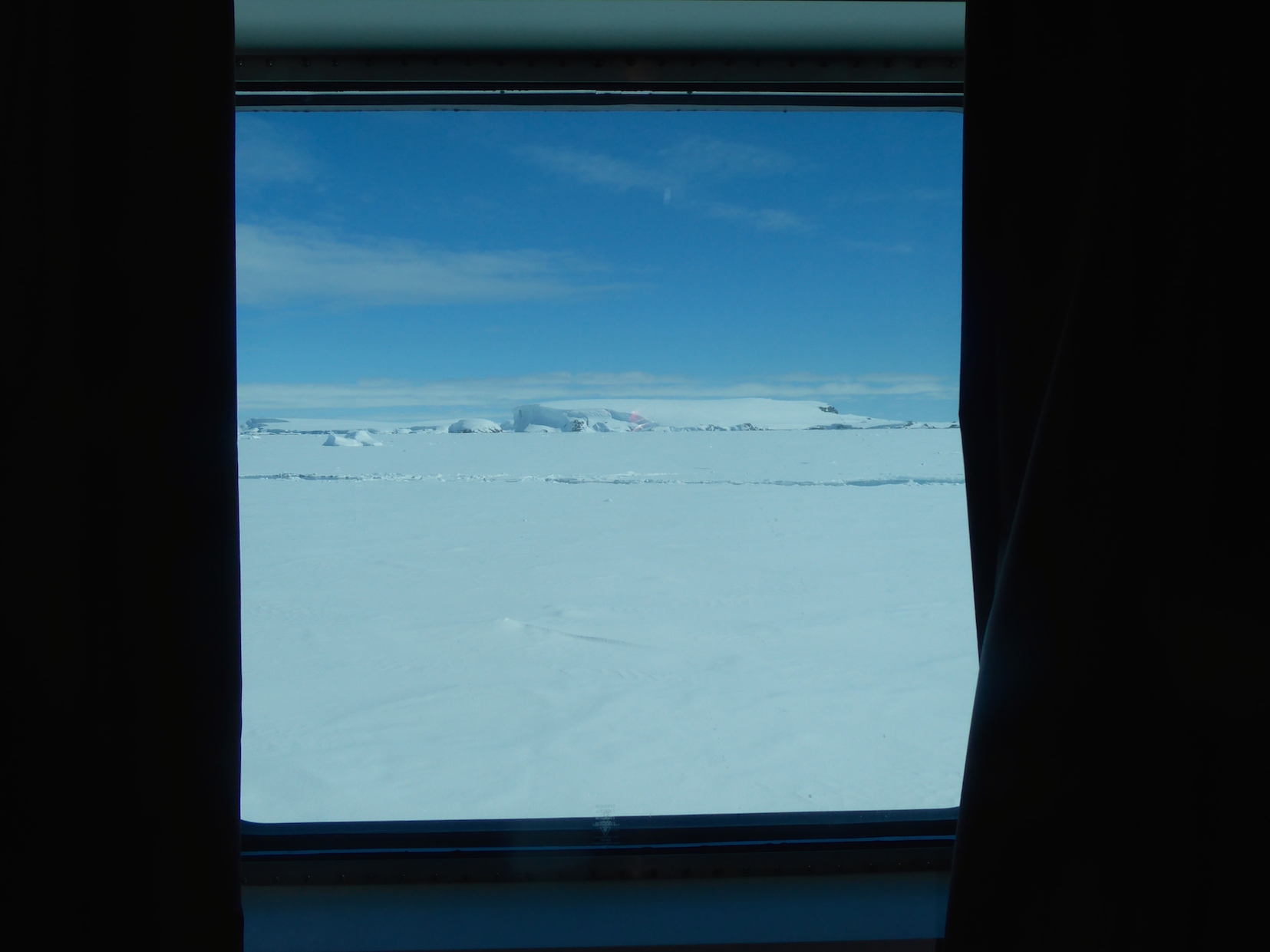 And the obligatory dining-room photo. What a treat it is to each lunch jammed in pack ice! 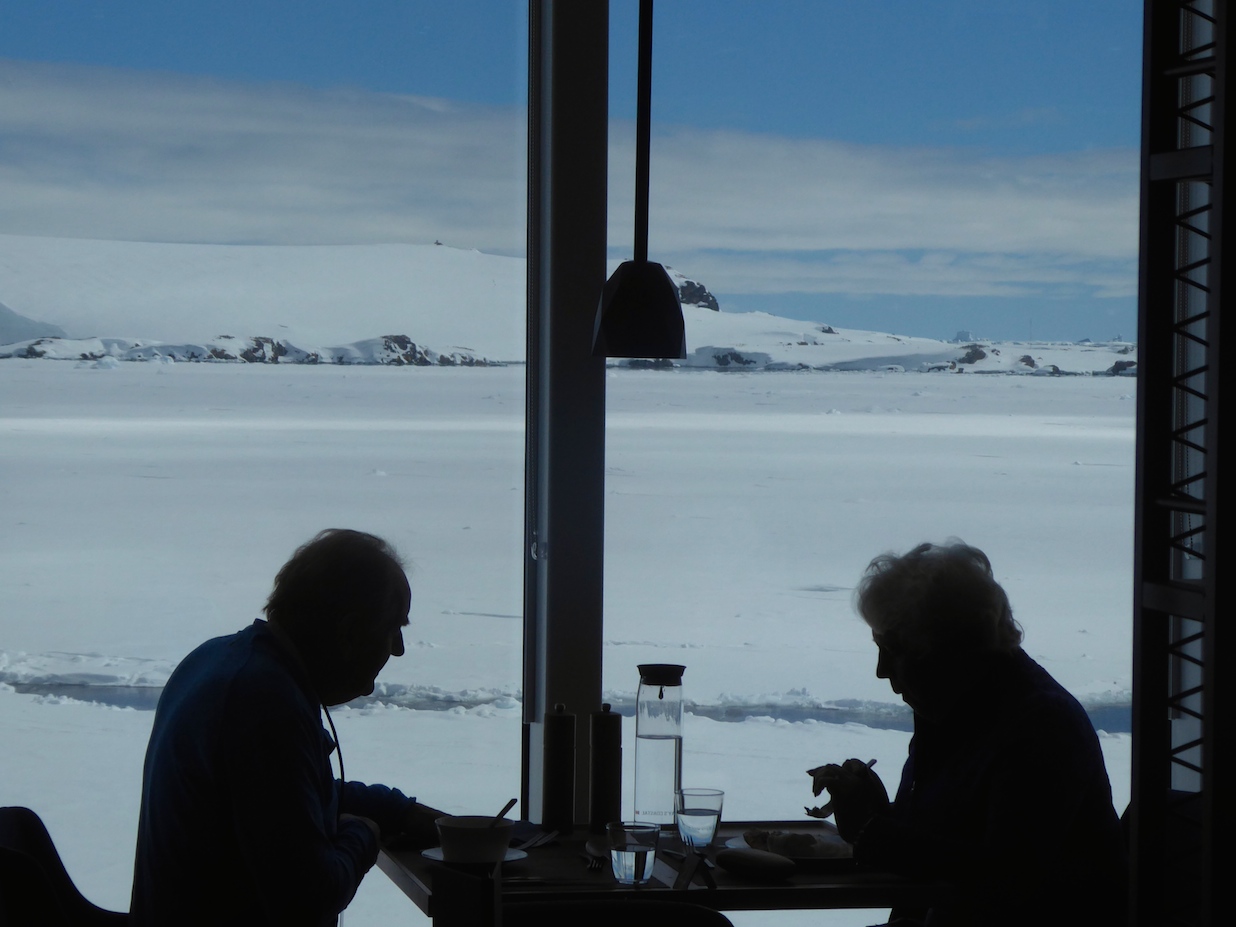 Tomorrow I’ll have a full report on our visit to the Ukrainian Vernadsky Research Base, which harbors the world’s southernmost bar, where they sell shots of their homemade vodka—made with glacial ice!