In January of 2018 I wrote a post about whether Penn State’s assistant football coach Jerry Sandusky was guilty of child abuse. In 2012 Sandusky was, as you may remember, convicted of 45 counts of sexually abusing eight young boys. His prison sentence was 30-60 years, and, since he was born in 1944, this was of course a life sentence.

My post dealt at the time with an article by Fred Crews (full disclosure: he’s a friend), the former chairman of the English Department at UC Berkeley and an incisive debunker of Sigmund Freud’s “science”.  Crews wrote an article on the website of Skeptic Magazine called “Trial by Therapy,” raising red flags about the evidence used to convict Sandusky and highlighting a book written by Mark Pendergrast (who’s also published on the fallacy of “recovered memory”) called The Most Hated Man in America: Jerry Sandusky and the Rush to Judgment . In Pendergrast’s view, Sandusky was “probably innocent.”

Now Sandusky, or rather one of his associates at Penn State, Graham Spanier (Penn State’s ex-President, who was fired), has resurfaced as one subject of Malcolm Gladwell’s new book Talking to Strangers: What we Should Know about the People We Don’t Know.  Gladwell’s thesis, which is pretty thin (and noted by several reviewers, so that the book hasn’t gotten the usual rave reviews of a Gladwellian tome), is that we practice a kind of confirmation bias in our dealings with strangers, trusting the words and actions of someone whom we like but demonizing everything said and done by someone we dislike. (This of course is playing out in national politics at the moment.)

In a new post at Medium, Crews discusses how Gladwell treats the Penn State case. And in discussing Spanier, Gladwell seems to come perilously close to admitting that the case against Sandusky was weak. But, argues Crews, Gladwell can’t bring himself to even say that, for the Sandusky issue is radioactive. As I learned, if you dare even question that a man accused of sexual abuse of multiple young boys might have suffered a miscarriage of justice, you yourself become one of the demonized. (Crews published the piece himself because no editor would touch it.) But, argues Crews (and Prendergrast), there are serious reasons to think that Sandusky was indeed railroaded. 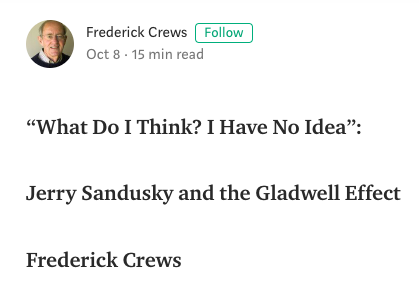 Here’s an excerpt, and then I’ll list the issues with the Sandusky case. I’m not that familiar with the trial itself, so I will say nothing beyond noting that if Crews, Predergrast (and Elizabeth Loftus, the recovered-memory expert who endorsed Prendergrast’s book) are right, we have to at least revisit the Sandusky matter.

The thesis of Malcolm Gladwell’s best-selling new book, Talking to Strangers: What We Should Know about the People We Don’t Know (Little, Brown), consists of two related propositions. First, we humans are naturally disposed to trust others, and we find it hard to credit evidence that our trust was wrongly invested. But obversely, everything said or done by a “stranger” — someone we’ve already decided to mistrust — will be interpreted as consistent with that person’s bad intentions. The stranger (but for clarity’s sake let us rather say the alien) will further alienate us even by actions we would otherwise regard as admirable.

As an example of the first pattern, Gladwell cites the failure of Graham Spanier, then president of Pennsylvania State University, to notify the police in 2001 upon allegedly being told that a retired assistant football coach, Jerry Sandusky, had been seen sodomizing a child in the shower room of a campus sports facility. For that offense Spanier was dismissed by Penn State’s trustees and indicted, tried, and convicted of child endangerment. (The conviction was recently vacated, but a possible retrial looms.) Gladwell finds it easy to forgive Spanier, for Sandusky had been admired, even revered, for charitable works. In Spanier’s shoes, Gladwell is certain, you and I would have made the same mistake.

Needless to say, the guilt or innocence of Graham Spanier is not a topic of burning interest to the general readers who anticipated publication of Talking to Strangers. Even Gladwell surely regards it as peripheral. But for whatever reason or reasons, he won’t directly address the matter of Sandusky’s own criminality or lack of it. Nor, however, can he leave it entirely alone. Willy-nilly, he has placed in public view crucial revelations, previously known only to a small number of doubters, that cast the Sandusky issue in a novel light. And Gladwell himself must be counted among the commentators whose earlier pronouncements about Sandusky are now thrown into radical question.

Read Crews’s article to see how Gladwell, despite having hit on exculpatory factors for Sandusky, tiptoes around the issue. Here are some of the concerns raised by Crews and others:

1.) “The boy in the shower”, the linchpin of the case against Sandusky, swore in a written statement to Sandusky’s attorney that no sexual contact had occurred. After he hired a lawyer, the boy (now older) recanted. This may be because he wanted a slice of the generous settlement offered by Penn State to Sandusky’s victims—a settlement that turned out to be about $140 million, making any claimed victim a multimillionaire.

2.) None of the eight boys who eventually said they were molested by Sandusky ever told anyone about his misconduct before they spoke to police, and many continued to associate with him in the interim.

3.) Some of the accusations, like Sandusky locking a boy in the basement for three days and repeatedly raping him, with Sandusky’s wife, one floor above and oblivious to the screams, strain credulity.

4.) Some or all of the boys (it’s not clear from the piece) were subject to “recovered memory therapy”, and didn’t remember the molestations until therapists “helped” them remember the details.

The above is only a sample of other exculpatory data offered by Crews.

Here’s what Crews says about that, and about the motivations for these belated accusations:

It is this aspect of the case that drew the interest of the psychologists Elizabeth Loftus and Richard Leo, who understand that the theory of repression lacks any scientific credit. To them, belated “recollections” such as Sabastian Paden’s tale of a three-day sadistic kidnapping bore every mark of the dreamlike pseudomemories typically conjured by patients of recovered memory therapists. Paden may simply have been lying, of course. But the authorities who targeted Sandusky were indeed working in tandem with memory enhancers. One of them subjected his patient, Aaron Fisher, to months of daily brainwashing until Fisher more or less “recalled,” or pretended to recall, scenes of violation. “It wasn’t until I was fifteen and started seeing [therapist] Mike [Gillum],” wrote Fisher, “that I realized the horror.”

Other memories were refreshed as it became apparent that any new claims against Sandusky were likely to be believed. “I tried to block this out of my brain for years,” one turncoat declared. Another reflected, “That doorway that I had closed has since been reopening more.” A third stated, ”I have spent, you know, so many years burying this in the back of my head forever.” And after Sandusky was remanded to prison, Pennsylvania’s attorney general at the time, Linda Kelly, congratulated the ex-Second Milers for having dredged their damning scenes from the unconscious. “It was incredibly difficult,” she pronounced, “for some of them to unearth long-buried memories of the abuse they suffered at the hands of this defendant.”

The one major question that remains is what induced beneficiaries of Sandusky’s kindness to betray him so cruelly. Ziegler and Pendergrast know the answer — but so does Gladwell. “According to Ziegler’s reporting,” he remarks in the middle of a long endnote, where it will escape most readers’ attention, “at least some of Sandusky’s victims are not credible. They appear to have been attracted by the large cash settlements that Penn State was offering and the relatively lax criteria the university used for deciding who would get paid.”

“Some of Sandusky’s victims”? No, all of them. In a paroxysm of needless remorse, the Penn State trustees had broadcast the availability of a vast compensation fund that would eventually approach $140 million. An incentive was thus created for any young man who had once been helped by Sandusky, and even for some who had never met him, to spin a preposterous yarn and become an overnight multi-millionaire. And that is exactly what happened — for example, with the lawyered-up shower boy, Allan Myers. At last count, some thirty-five applicants, feigning PTSD at Sandusky’s hands, had availed themselves of Penn State’s princely largesse.

If you think 8 accusations is proof of Sandusky’s guilt, do remember the McMartin preschool case of “ritual Satanic abuse” of children between 1983 and 1987, in which 41 of the putatively abused children testified to that abuse before the grand jury and a dozen or so at the trial.  Those children were urged and nudged by therapists, police, and social workers to level accusations against two of their teachers, one of whom spent 5 years in jail. But in the end nobody was convicted. As Wikipedia reports,

The trial lasted seven years and cost $15 million, the longest and most expensive criminal case in the history of the United States legal system, and ultimately resulted in no convictions. The McMartin preschool was closed and the building was dismantled; several of the accused have since died. In 2005, one of the children (as an adult) retracted the allegations of abuse:

Never did anyone do anything to me, and I never saw them doing anything. I said a lot of things that didn’t happen. I lied. … Anytime I would give them an answer that they didn’t like, they would ask again and encourage me to give them the answer they were looking for. … I felt uncomfortable and a little ashamed that I was being dishonest. But at the same time, being the type of person I was, whatever my parents wanted me to do, I would do.

Is it possible that the Sandusky accusations fall into this class? You be the judge.  As to why Gladwell, who knew some of the facts above, won’t even hint that Sandusky may have been railroaded, one can at least guess at an answer. If Gladwell even hinted at that, his career as a writer would be over, for he would have stepped into territory that would have besmirched him in the public eye—territory from which there is no return. But here I’m only speculating. 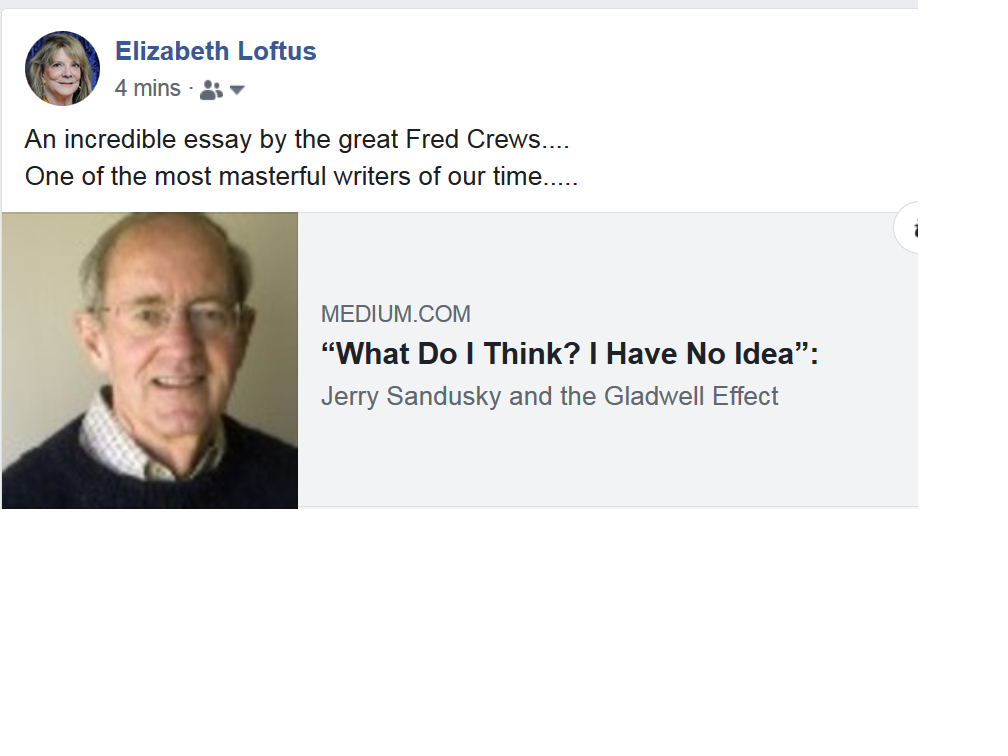 78 thoughts on “The case of Malcolm Gladwell vs. Jerry Sandusky”