James Flynn is a well known researcher on human intelligence at University of Otago in Dunedin, New Zealand, and the man after whom the “Flynn Effect” is named. If you don’t remember that term, it refers to the continuing increase in intelligence, as measured by IQ, throughout the world. We don’t fully understand the trend, but it seems to be a real phenomenon.

At any rate, in this new article in Quillette(click on screenshot), Flynn recounts how a book he just wrote defending free speech (called, of course, In Defense of Free Speech) was rejected by Emerald Publishing, but not on very substantial grounds. It’s questionable whether the word “banning” really applies here, but one could say that it was banned from publication after it had been accepted. (A simple rejection wouldn’t count as “banning”.) 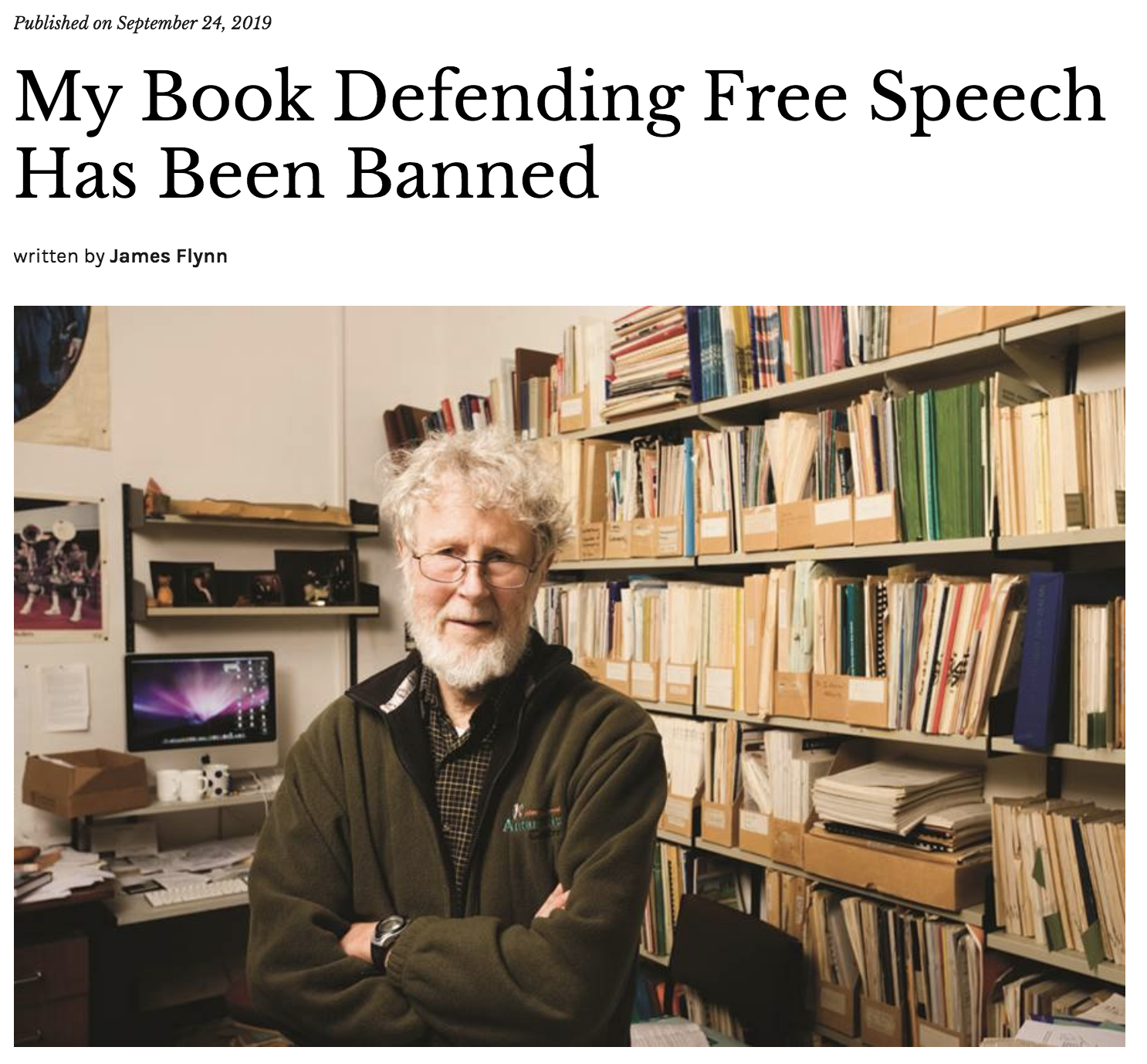 In fact, the book appears to be largely about colleges and universities and their attempts to deplatform speakers or otherwise enforce ideological purity through speech codes, trigger warnings, and the kind of “party line” that pervades much of the humanities. Why did the publisher pull out? Fear, pure and simple, as recounted in the publisher’s letter of rejection to Flynn:

There are two main causes of concern for Emerald. Firstly, the work could be seen to incite racial hatred and stir up religious hatred under United Kingdom law. Clearly you have no intention of promoting racism but intent can be irrelevant. For example, one test is merely whether it is “likely” that racial hatred could be stirred up as a result of the work. This is a particular difficulty given modern means of digital media expression. The potential for circulation of the more controversial passages of the manuscript online, without the wider intellectual context of the work as a whole and to a very broad audience—in a manner beyond our control—represents a material legal risk for Emerald.

Secondly, there are many instances in the manuscript where the actions, conversations and behavior of identifiable individuals at specific named colleges are discussed in detail and at length in relation to controversial events. Given the sensitivity of the issues involved, there is both the potential for serious harm to Emerald’s reputation and the significant possibility of legal action. Substantial changes to the content and nature of the manuscript would need to be made, or Emerald would need to accept a high level of risk both reputational and legal. The practical costs and difficulty of managing any reputational or legal problems that did arise are of further concern to Emerald.

For the reasons outlined above, it is with regret that Emerald has taken the decision not to publish your manuscript.

The first reason is bogus, for even in the UK I strongly doubt they’d prosecute Flynn for making statements that, while not themselves fostering bigotry, could be construed as hate speech by some people in some places at some times. Second, the “legal action” issue seems bogus as well, for Flynn says that “every reference to a person is documented by citations of published material or material in the public domain.” No, the real reason is the “reputational” one: Emerald could be demonized for publishing such a book.

Note that the book had been accepted and scheduled for publication, but the “risk” seen by the in-house flacks and cowards meant that it was ultimately rejected, and Flynn hasn’t yet found a publisher. I hope and trust he will. as I, for one, want to read the book.

Then Flynn shows us why speech that’s potentially offensive should be free—and published. Here he explains, by quoting from the book, why he’s personally benefited from reading “hate writers”:

I then use the case of Charles Murray being denied a platform at Middlebury College to show what students and staff miss out on when they refuse to hear or read those who offend them:

This is a reflection of the patronizing view, which leads to such censorship, that if you hear “hateful words”, you’ll perforce adopt them as your own. Such an attitude gives people no credit for being able to evaluate ideas for themselves. And that’s why nobody should take it upon themselves to be censors. Remember, the book had already been accepted for publication.

In the last paragraph Flynn reiterates this idea:

Discussing why free speech should extend to questions of race and gender necessarily involves presenting views (such as those of Jensen, Murray, and Lynn), if only for purposes of rebuttal, which upset those who believe that racial and sexual equality is self-evident. If upsetting students or staff or the public is a reason for banning speech, all such discussion is at an end. I end the book by quoting from George Orwell’s original preface to Animal Farm, which was itself rejected by Faber and Faber for being too critical of Stalin: “If liberty means anything at all, it means the right to tell people what they do not want to hear.”

Shame on Emerald Publishing, but I hope to read this book if another publisher has the moxie to put it out.