In its new student handbook, Harvard University has modified its free speech policy. I haven’t been able to find the new regulations online, but am going by the reports of the student newspaper, the Harvard Crimson. Click on the screenshot below to see its report on the changes: 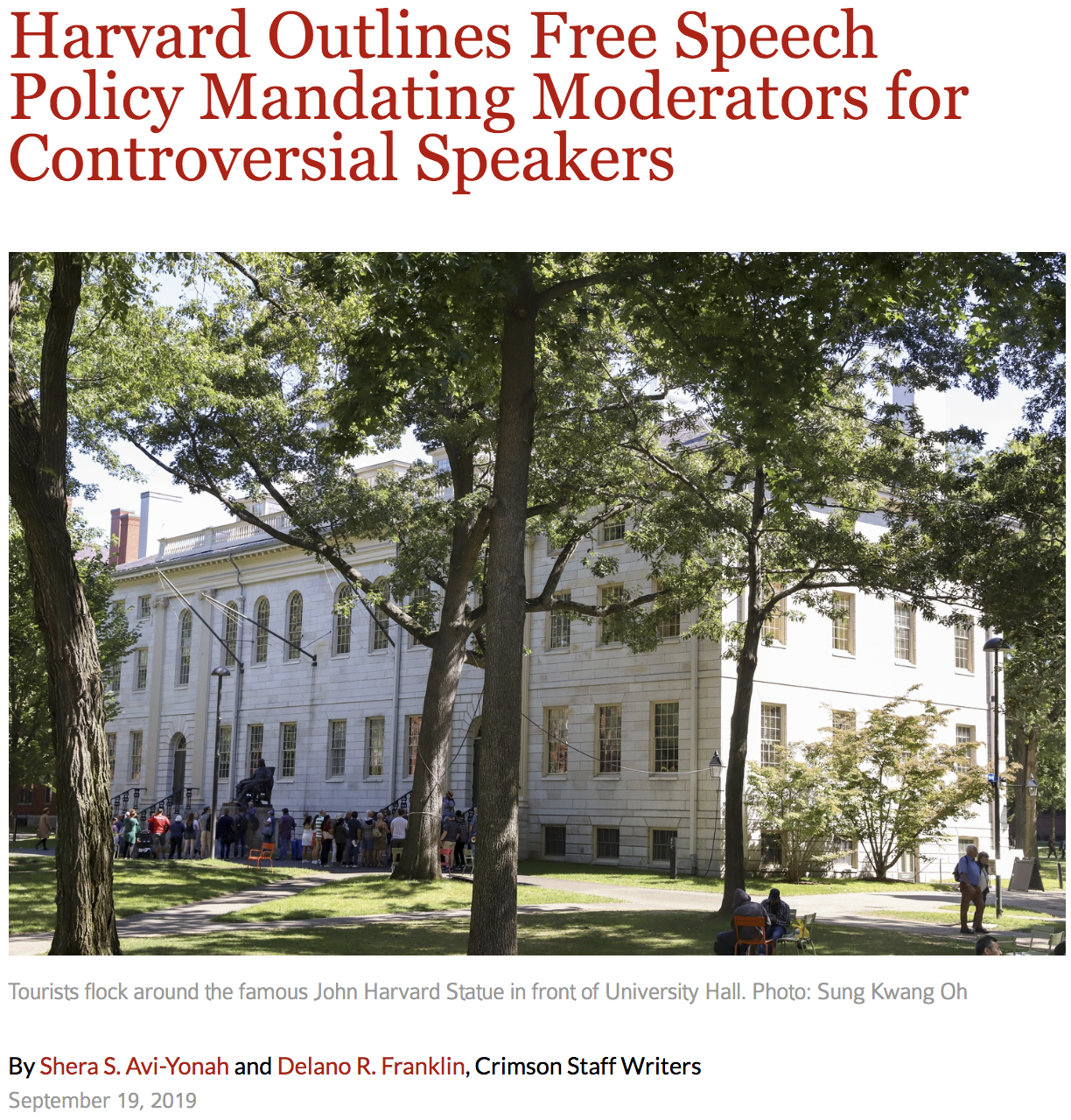 Some of the changes are salubrious, like those regarding ejection of disruptors. But most of the changes are worrisome and may serve to stifle invitations of “controversial” speakers to Harvard. All in all, the guidelines are far more draconian than the University of Chicago’s free-speech guidelines, which have been adopted, directly or in spirit, by 67 American universities.

Here are the stipulations of the new Harvard policy that applies to undergraduate organizations. Only the first is admirable:

1.) There is a “two strike” policy against students who try to disrupt talks: if you disrupt more than once, you can be removed. (The Crimson says nothing about discipline beyond removal.)

2.) “. . . groups bringing high-profile, controversial, or ‘VIP’ guests to campus must notify the DSO [Dean of Students’ Office] at least a month in advance, and that a moderator may need to attend events if the DSO finds it necessary or if a group requests one. In most cases, the moderator will be a DSO employee, but student groups can also request that a member of the Harvard faculty or administration act as the moderator instead.” The Crimson also says that the moderator must be neutral: “The College’s Dean of Students’ Office added a policy requiring neutral moderators at events with ‘controversial’ speakers to this year’s resource guide for extracurricular organizations.”

3.) “Moderators will also be able to cancel events if they believe there is a ‘clear threat’ of violence or damage to University property.”

If there is disciplinary action against disruptors beyond expulsion from an event, that needs to be specified as a possibility. After all, what do you really suffer if you’re just kicked out? Someone will simply replace you. There have to be more punitive sanctions than simply this one. (Perhaps there are, but they’re not reported.)

But it’s the second and third stipulations that are most problematic. Notifying the DSO may be useful if they have to implement security (though the Harvard Police would be better), but for many guests a month in advance is too long, particularly for “VIP” or “high-profile” guests with tight schedules. And why are these two groups subject to the sanctions, anyway?

The requirement for a “neutral” moderator is odious, and an attempt to neutralize any “triggering” or “hate” speech uttered by a visitor. And what is a “neutral” moderator, anyway? Someone who neither agrees nor disagrees with a speaker? That would be hard to find on a campus as liberal as Harvard. In some cases, if a student organization invites someone, and the moderator is from that organization, he or she will surely not be “neutral.”

And how would the moderator act “neutrally”?  In most cases a moderator is there to introduce the speaker, and sometimes to choose audience members who want to ask questions. How do you do that “neutrally”? (My view about “question time” is that it is almost always useful and necessary, but shouldn’t be absolutely required: what’s important is that the speaker gets their views expressed, and students can ponder and argue the message on their own time. In addition, there are plenty of opportunities for legal protests and “counter-speech”.)

Further, having the Dean’s Office supply a moderator is clearly an instance of the University trying to quash controversial speakers. I’d think that it would be a bit daunting to invite a speaker if your moderator came from the Dean’s Office. Harvard’s Dean of Students, of course, is the odiously woke Rakesh Khurana, who’s had his sticky hand in many campus situations, including the firing of Winthrop House head Ronald Sullivan and the punishment of students who join single-sex “finals clubs” that aren’t even affiliated with Harvard.

Finally, it is the responsibility of both the inviting organization, and, ultimately, the University, to prevent violence or damage as the result of a speaker. Such violence would come from students rioting in response to “offensive” speech, as they did in Berkeley when Milo Yiannopoulos was scheduled to speak. Harvard has a big and efficient police department, which should be sufficient to prevent violence. That, and a clear punishment policy for such acts, should be sufficient. If the Dean’s Office can cancel events they deem them “threatening”, then that’s a deplatforming. And the threats, given the trend in colleges, are more likely to come from the Left than from the Right.

This is not a theoretical consideration. Since 2002, 12 speakers have been deplatformed, interrupted, or had their events rescheduled at Harvard based on student opposition. As far as I can see, none of these speakers intended to purvey “hate speech,” but you can see what kinds of topics are considered “hate speech” sufficient to warrant banning. Note that Robert Trivers, Michael Bloomberg, Lawrence Bacow (the current President of Harvard!) and Chelsea Manning have been deplatformed, and that opposition has come from both Right and Left (in the last decade, though, more opposition has come from the Left, giving rise to the fear that one side of the ideological spectrum will be censored more than others). 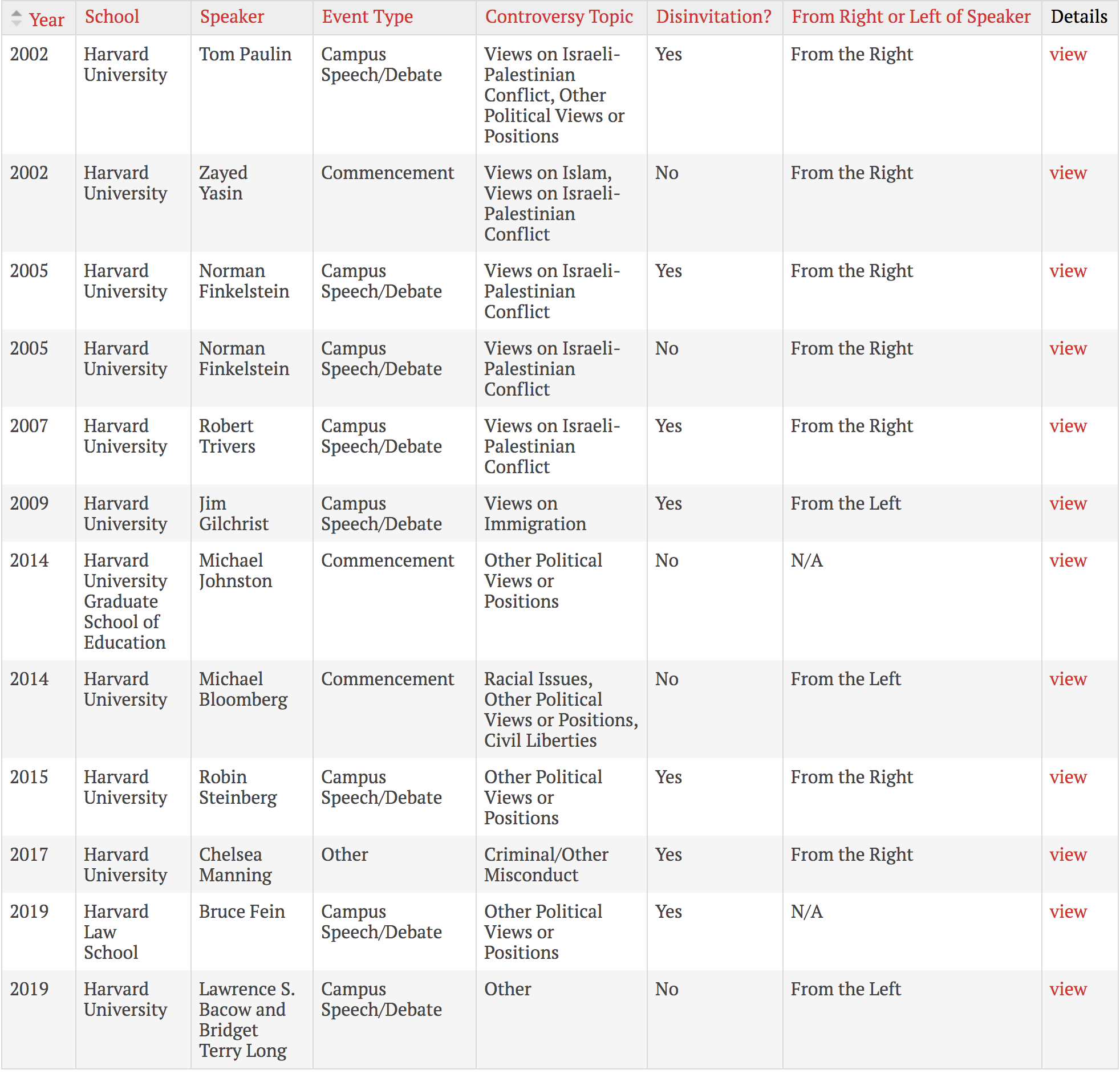 Similar guidelines appear to apply at the University’s Law School, which, though its policy about ejecting disruptors seems fine, includes this:

Senior HLS officials may determine that the protection of free speech at an open meeting requires the use of a moderator or facilitator. If so, the meeting must be held with a moderator/facilitator in attendance who will be selected by the sponsoring organization(s) at the time the event is scheduled, and who is subject to approval by the Dean of Students Office. The person selected must be perceived as neutral and non-partisan. She/he will generally be a member of the HLS or University faculty or administration. At the meeting, the moderator/facilitator must stress that his/her presence reflects no position for or against the views of the speaker or sponsoring organization. Final decisions regarding balancing the rights of the speaker with the rights of those who disagree will be made by the moderator/facilitator. This person will have final authority over all decisions, including, but not limited to:

At least the moderator will be chosen by the sponsoring organization, though again they must be approved by the Dean of Students office and must be “perceived as neutral and non-partisan.” How patronizing can you get?—and these are Law Students, who, presumably, study Constitutional Law and the First Amendment.

In a rare pro-free-speech editorial published yesterday, which, even more surprising, expresses concern for conservative viewpoints, the Harvard Crimson‘s editorial board came out against the University’s free-speech policy. They echo several of the things I said above, and add a few more (click on screenshot): 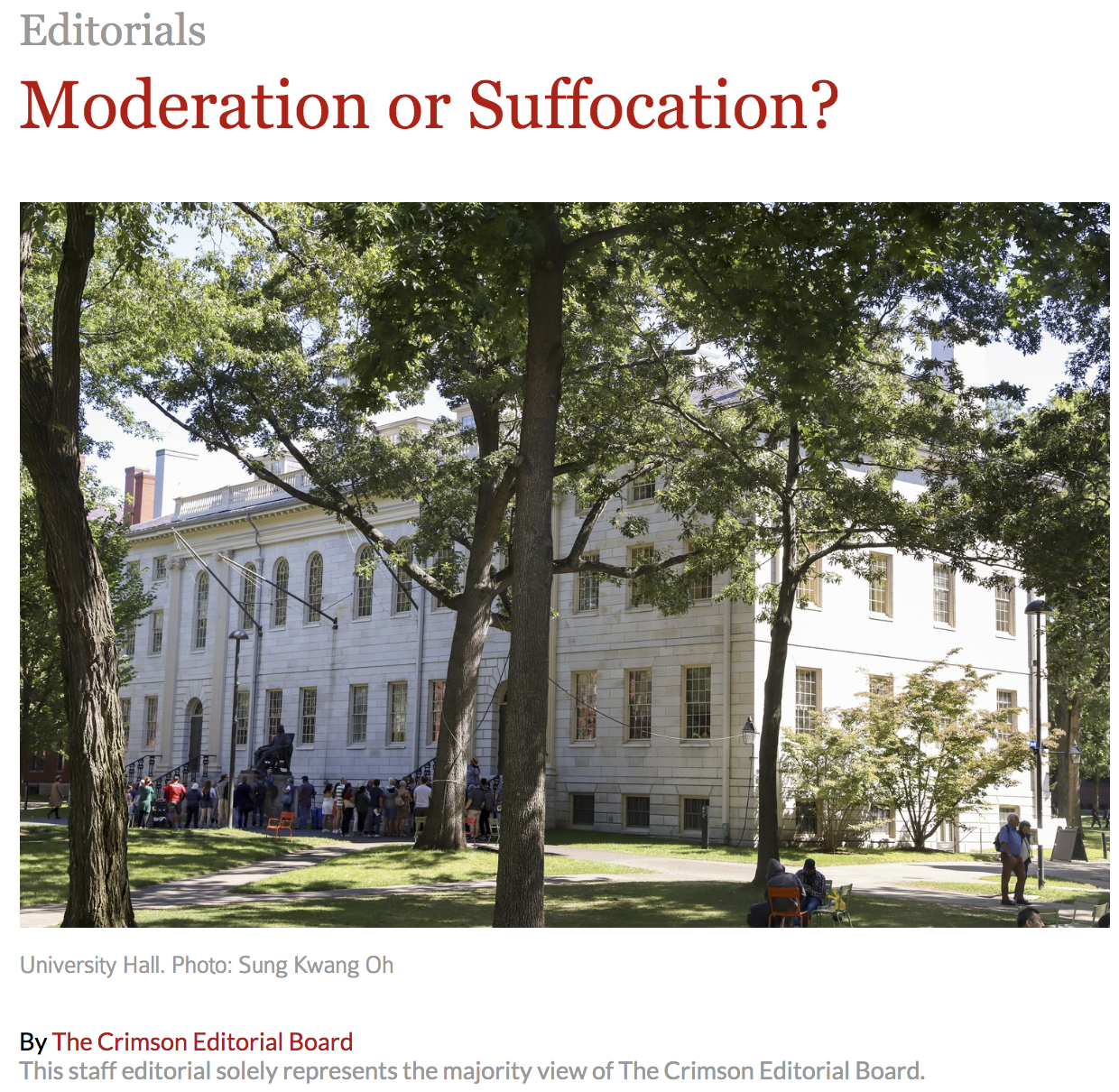 Just a few excerpts (my emphasis below):

. . . If student groups have to jump through a litany of hoops from the administration merely to get their approval — or rejection — their ability to promote intellectually rigorous conversation will be drastically limited. These stringent rules may very well discourage speakers and students alike, while also logistically inconveniencing leaders of extracurricular organizations. It is a great privilege to attend a University where so many significant thinkers and leaders come to share their ideas; making that exchange of ideas more difficult detracts from the institution as a whole as well as the individual experiences of its students.

But more importantly, we feel it necessary to ask what “controversial” even entails and why the DSO should be given the authority to answer that question on a case-by-case basis. The policy is troublingly vague and, in so being, threatens the autonomy of student groups on campus we have often defended. What will these moderators do, and what qualifies them as neutral? How will they determine a potential for violence? What is the formal registration process? How are “disruption,” “controversial,” “VIP”, and “violent” going to be defined? It does not appear to be good practice to institute a policy without fully defining all pertinent terms.

Without trafficking in slippery slopes, we worry that this ambiguity and the unstructured power it affords the DSO and its moderators are not so far off from a system of outright censorship. It’s not the University’s job to control speech, protest, and passionate debate. The paternalistic control of student forums is not only unwelcome on this campus, but corrosive to the statues of truth and free discourse that undergird Harvard’s purported mission.

Bravo to the Crimson for this editorial.

It’s ironic that Harvard, which prides itself as being the best university in the U.S., can’t adopt the Chicago Principles of free speech (we don’t require approval, moderators, or assessment of potential violence, as witnessed by the proposed appearance of Steve Bannon last year [he didn’t show]). Even the student newspaper calls out the University—and, implicitly Dean Khurana—for their paternalistic attitude towards free speech.