Send those photos in, folks! I can always use more.

Reader Ralph Burgess sent some swell photos from Kruger National Park, a place I hope to visit one day. His notes are indented below:

As requested, a selection here, all from the past couple of weeks in Kruger NP.  I’ve eschewed the more conventional iconic shots of lion, elephant, buffalo – I think these are some more interesting ones.

Tawny Eagles (Aquila rapax).  I initially saw just the bird on the left munching on a kill, right at the limit of my lens.  Just as my aging eyes managed to get him in focus, a second eagle came in to try to steal his lunch, and he launched. 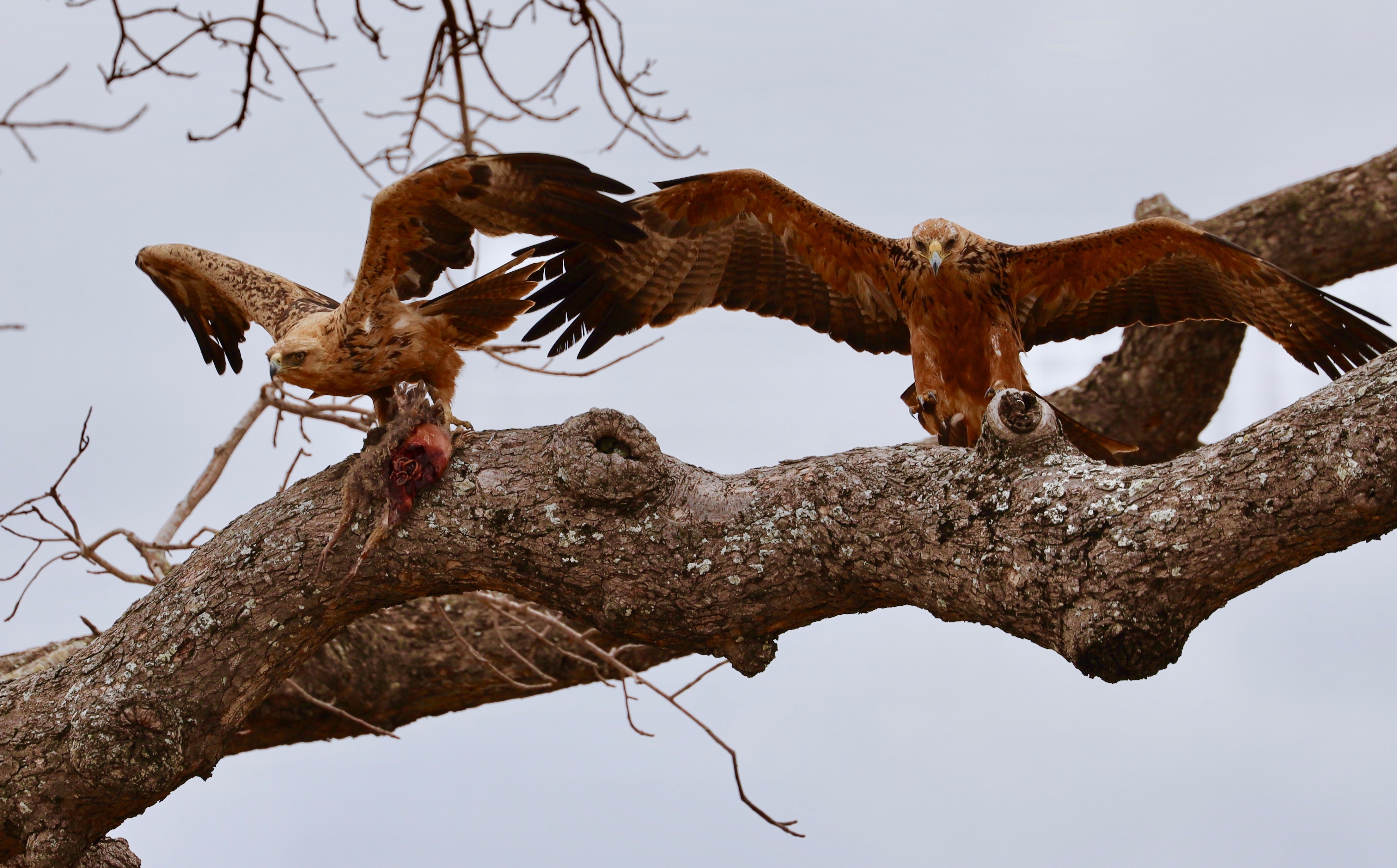 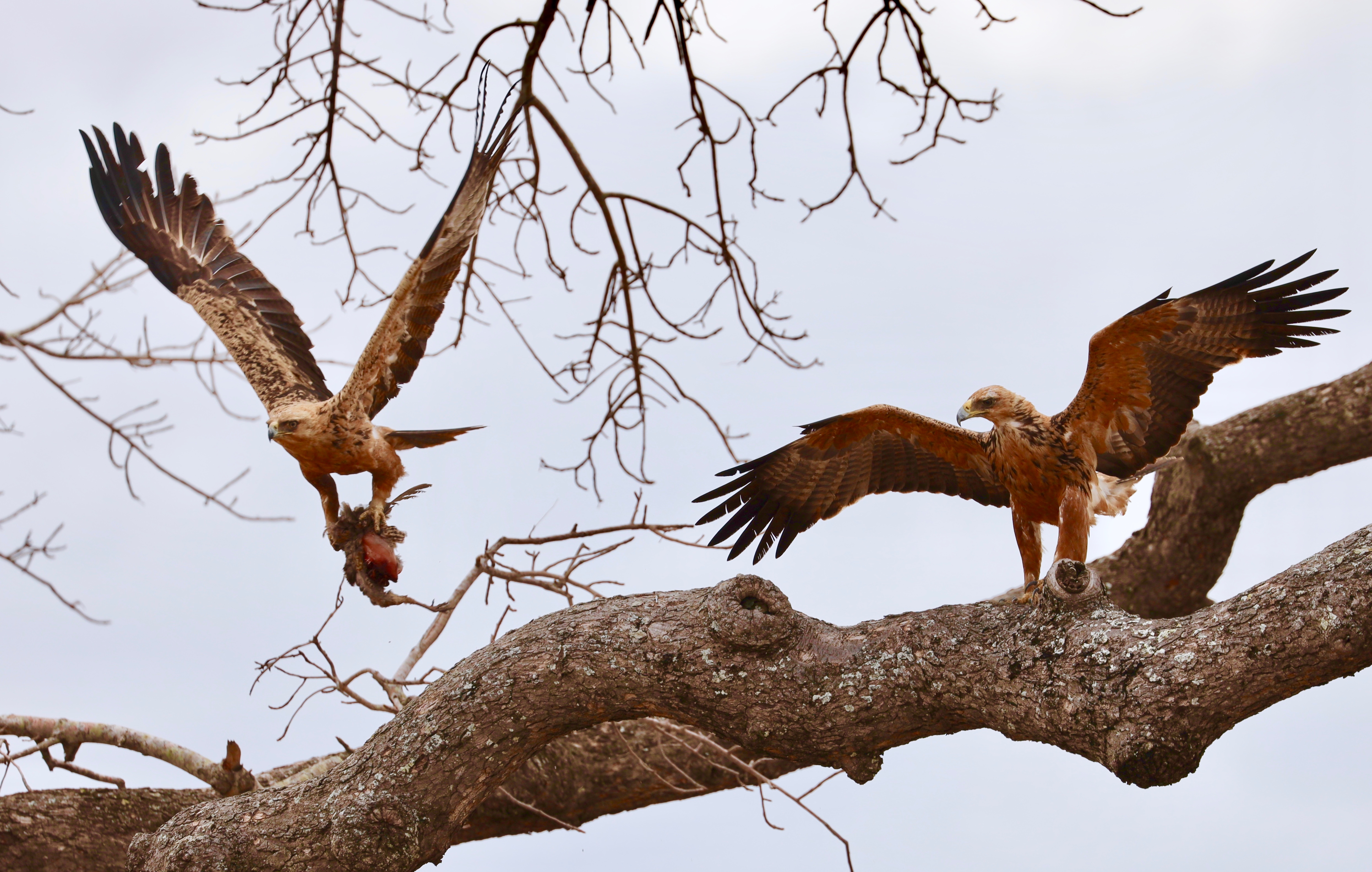 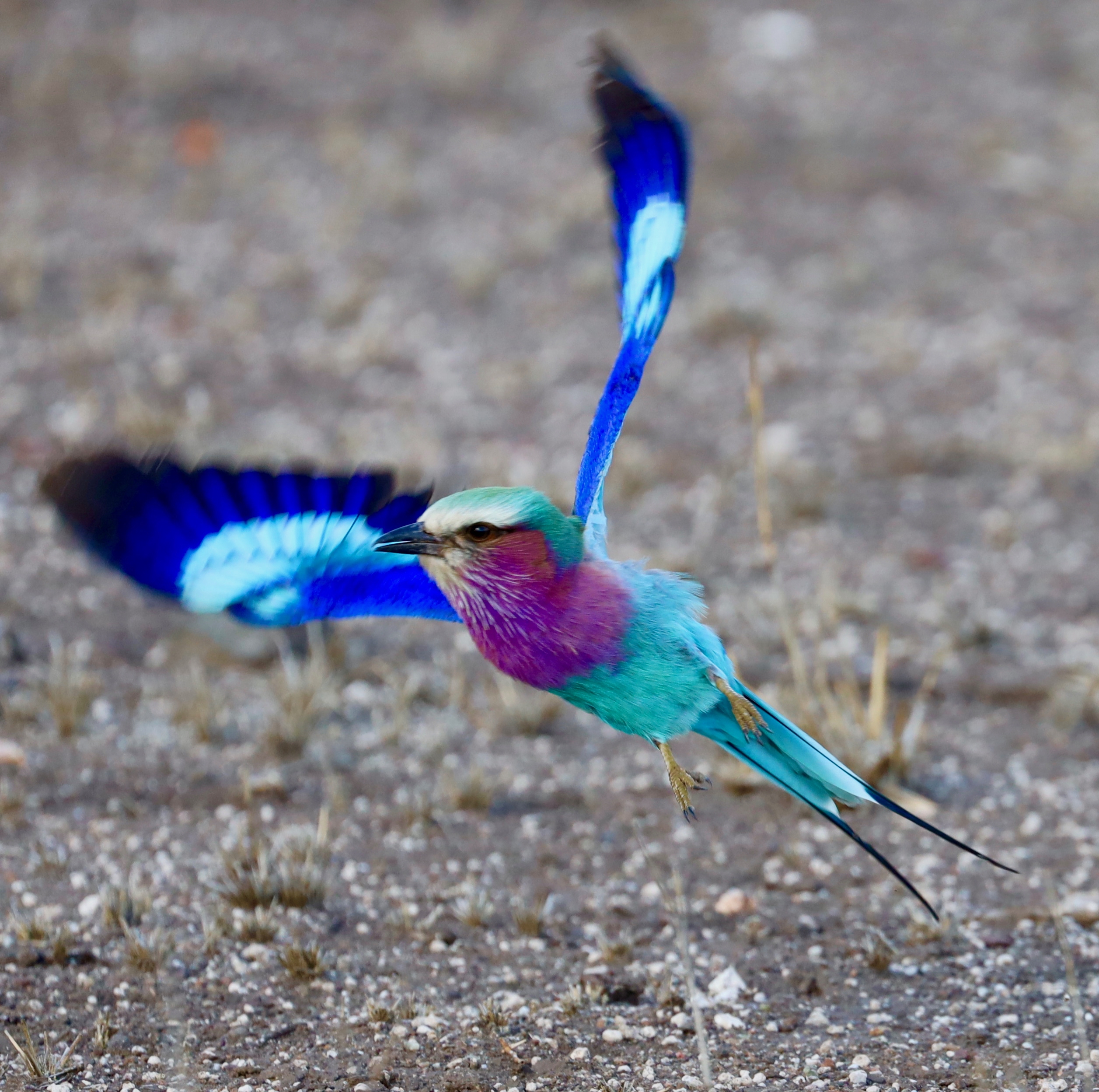 Spotted Hyena (Crocuta crocuta).  As I mentioned, I’d like to make a case for you to elevate the Spotted Hyena to honorary cat status. They are phylogenetically closer to cats than dogs, although some elements of morphology and niche are convergent with canines.  Their traditional negative reputation in both African and Western culture is undeserved.  They were notably curious and endearing animals when encountered in Kruger.  They are highly intelligent with complex social structure.  They are not primarily scavengers, and certainly not cowardly – they will try to fight off lions to protect their own kills.  The mother in the first picture had raised several litters in a culvert, pups of various ages were present.  The second picture shows an elder sibling playing at being a parent, grabbing his straying baby brother by the scruff of the neck to bring him back to safety.  The last Hyena picture shows a different animal with a fresh impala kill. 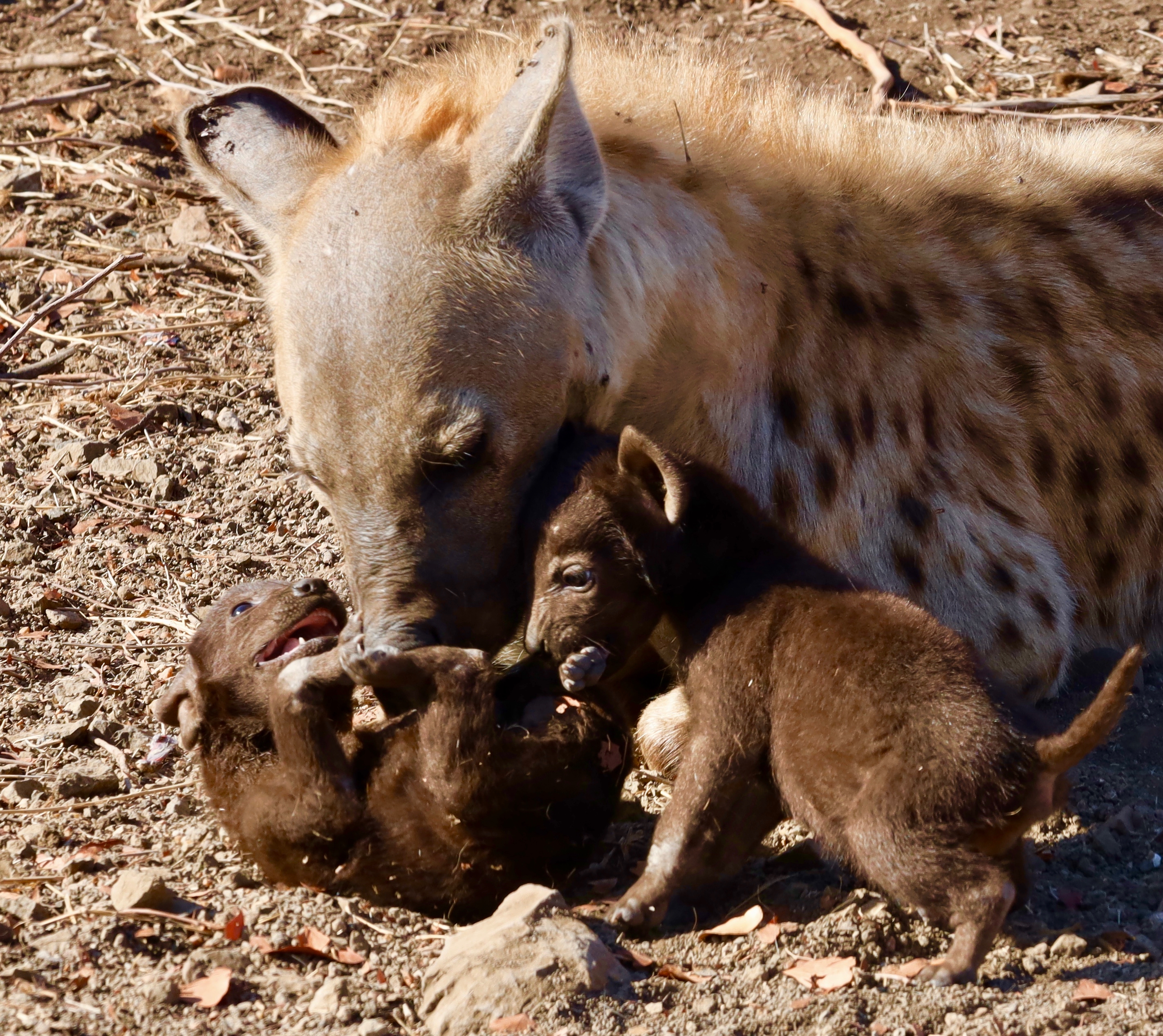 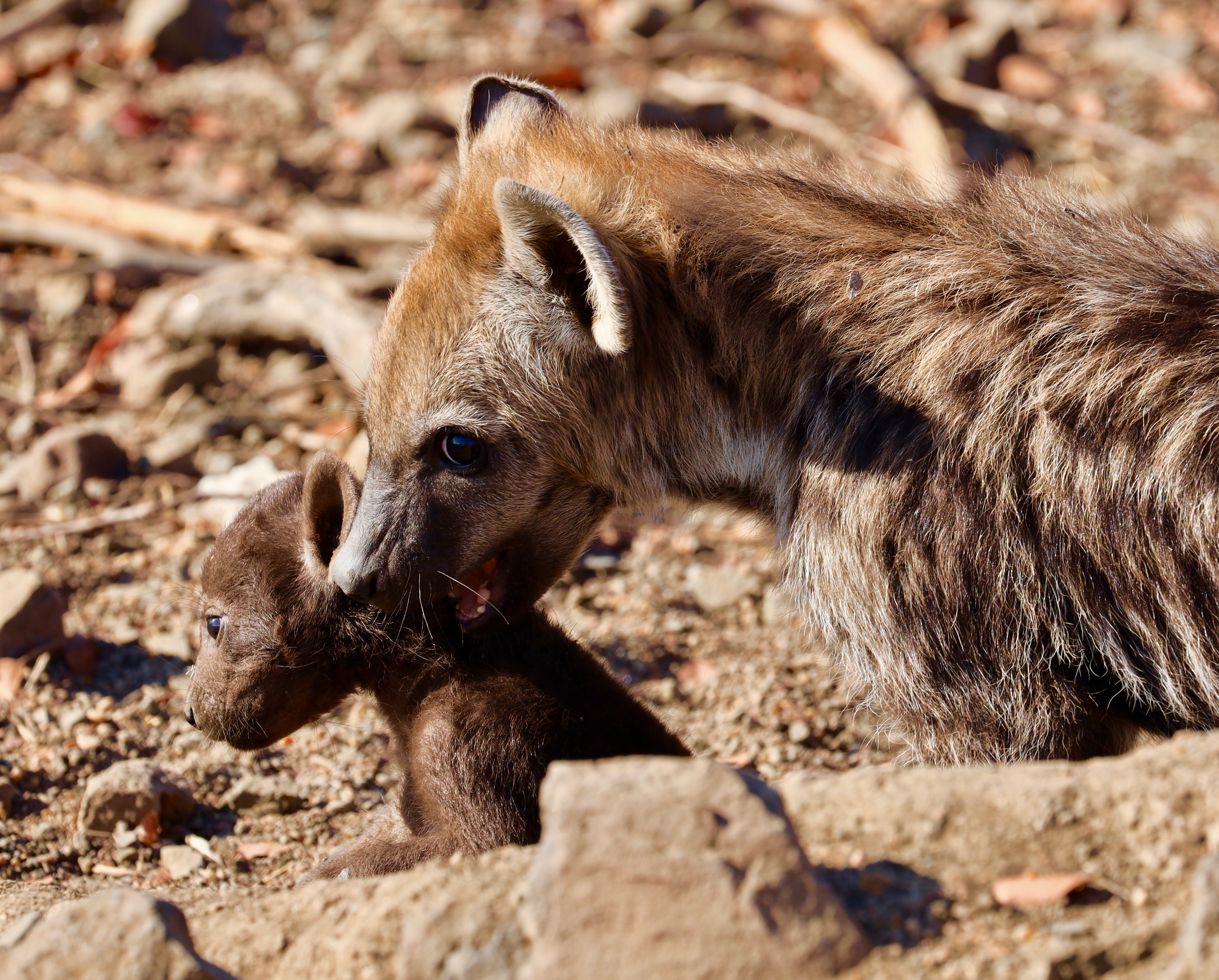 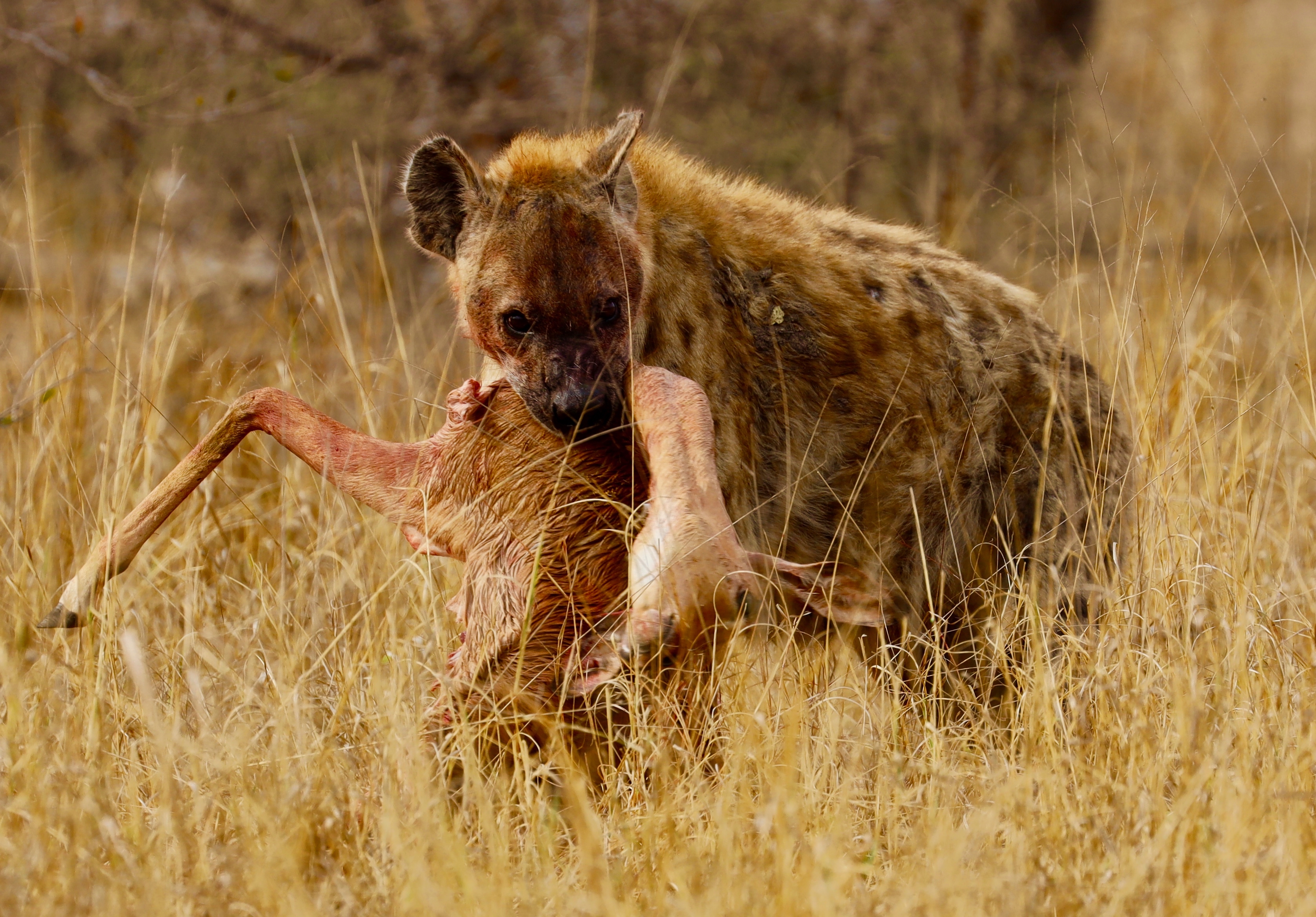 White-backed vultures (Gyps africanus). There was a lot more going on here than just the traditional vulture silhouette photo.   There was a snoozing pride of lions hidden close in the grass, probably protecting a recent kill, since the birds were actively moving from perch to perch trying for the best spot to monitor them.   I caught a moment when several birds were in flight switching position.   And I like the way the dry grass looks like the fires of hell beneath them. 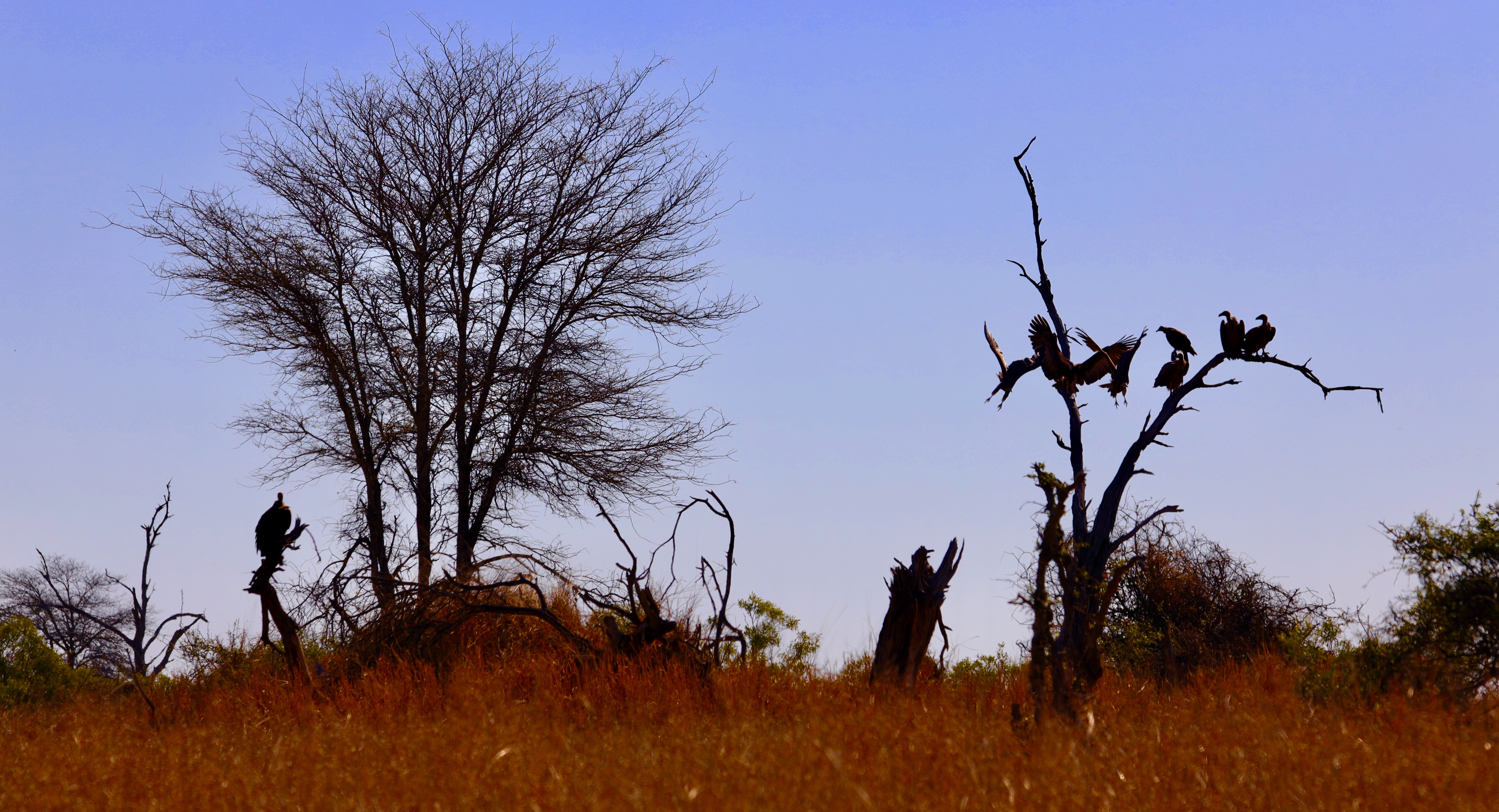 Kruger is probably the best place in the world for leopard (Panthera pardus) sightings.  The first is a male spraying.  The second shows a smaller female trying to stop her impala kill falling out of the tree. 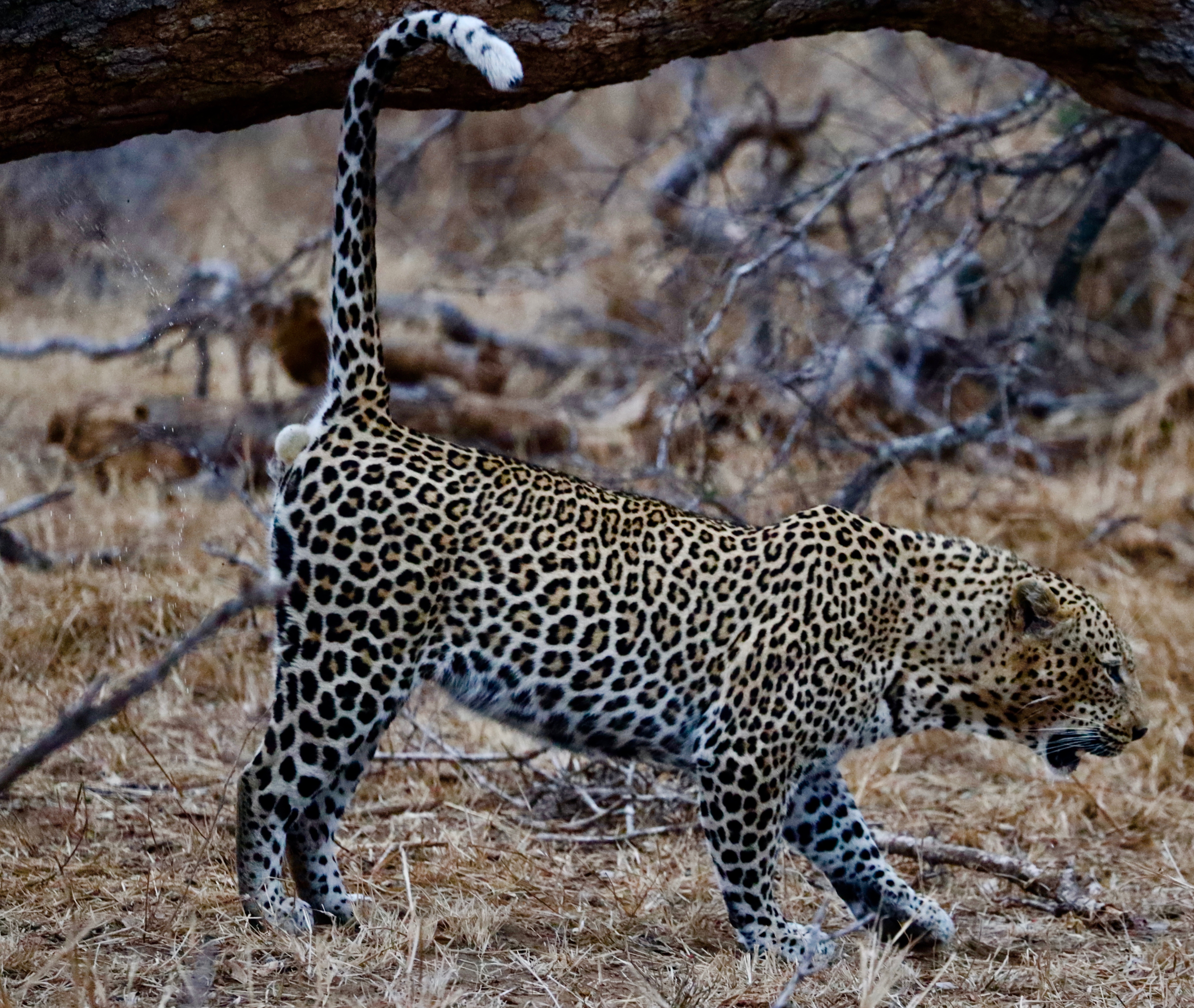 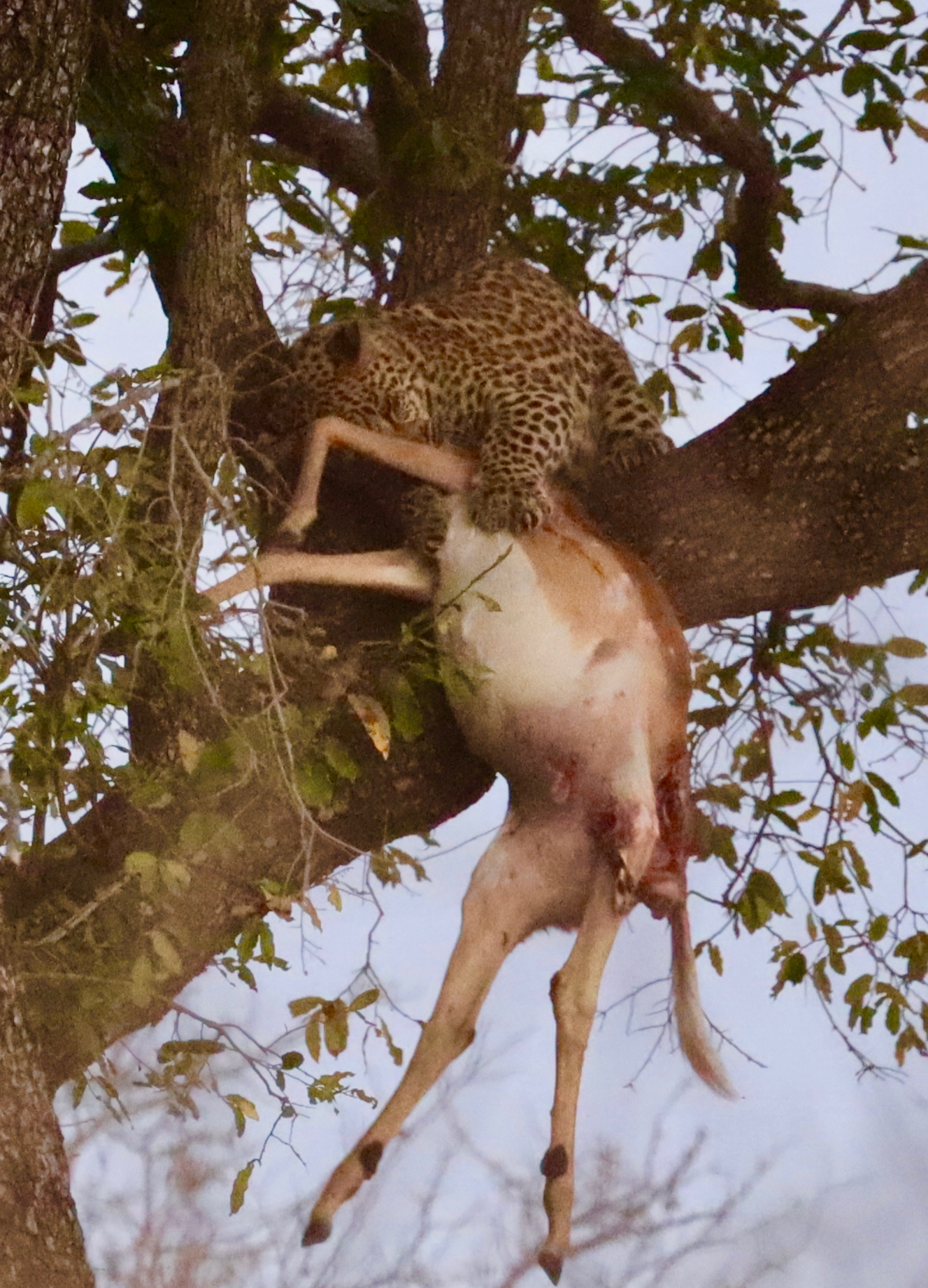 Chacma baboons (Papio ursinus), two modes of transport.  The first shows a miserable juvenile clinging on in the rain.  The second shows a baby small enough to ride underneath, with en route refreshments conveniently located. 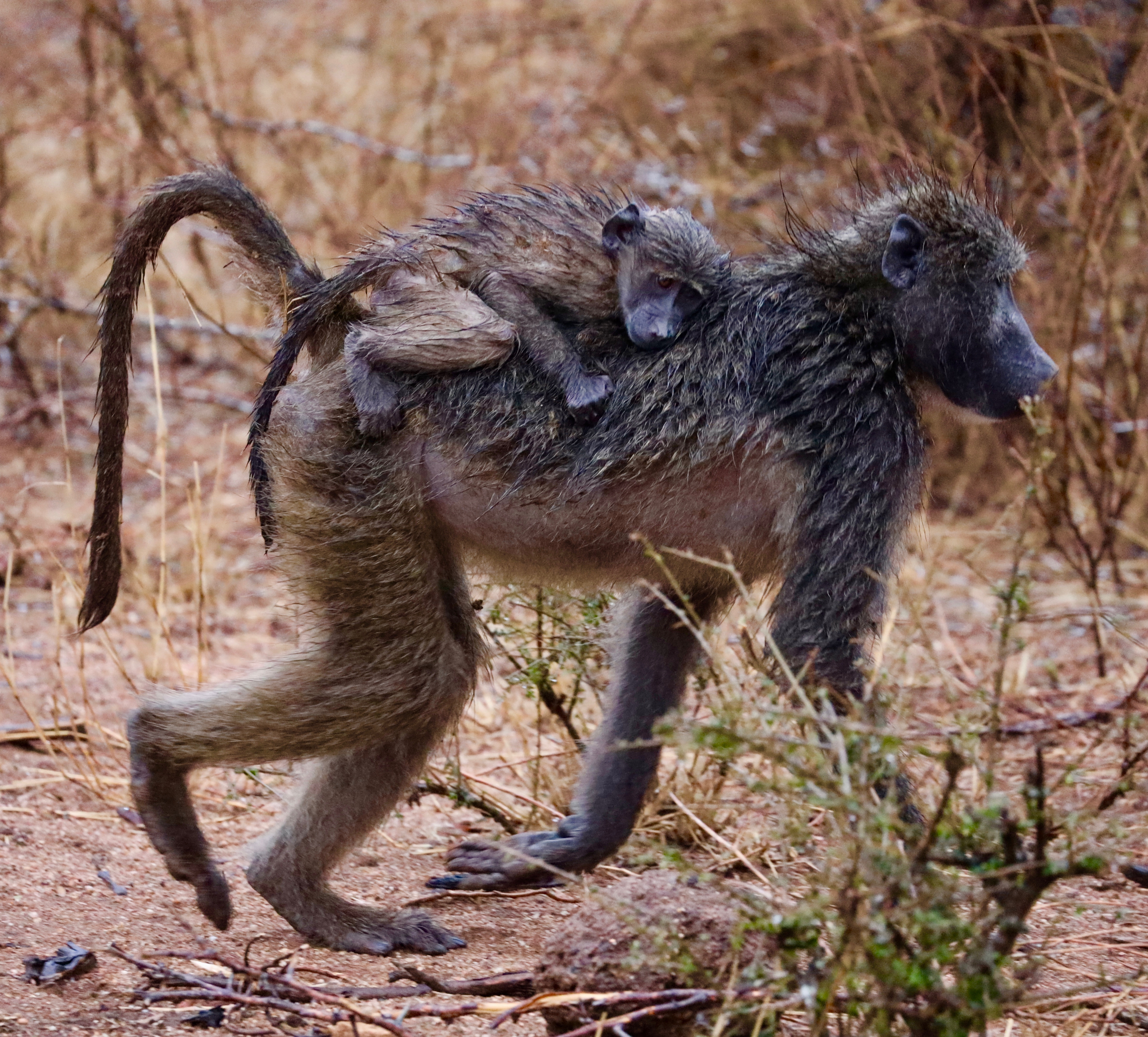 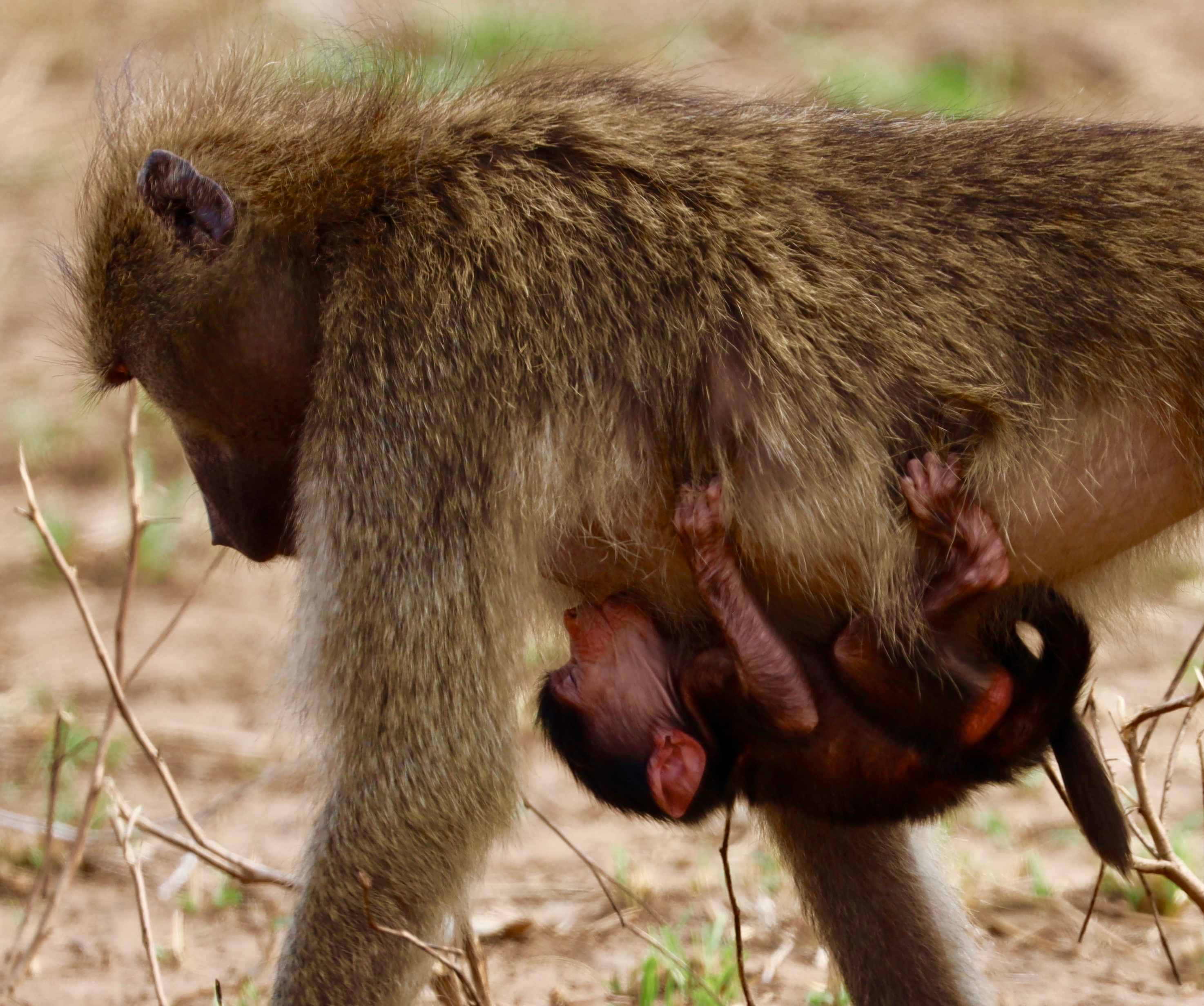