Tom Wright-Piersanti is a senior staff editor at the New York Times, and, according to many sources, including the Washington Examiner, The Hill, the New York Post, and so on, it was found that he had a long history of pretty blatant anti-Asian and anti-Semitic remarks in his Twitter feed. Granted, this was about nine years ago, but that history shows someone who, at least then, wasn’t exactly open-minded about certain issues. (Oh hell, let’s just say he was a “bigot”.)

Now the Times fired Quinn Norton as a tech writer over her history of questionable tweets, but decided to retain tech editor Sarah Jeong, who had an equally questionable history of bigoted postings on Twitter (see all my posts on Jeong here). Jeong was allowed to keep her prestigious position at the Times after issuing an apology and saying that her offensive tweets were really just hyperbolic satire of the abuse she had received as an Asian “woman of color” who wrote for other venues. And, of course, she was making fun of white people, which is an offense that can be written off.

But Wright-Piersanti doesn’t have either of those defenses. And so I think it would be hard for the Times to excuse stuff like the following: 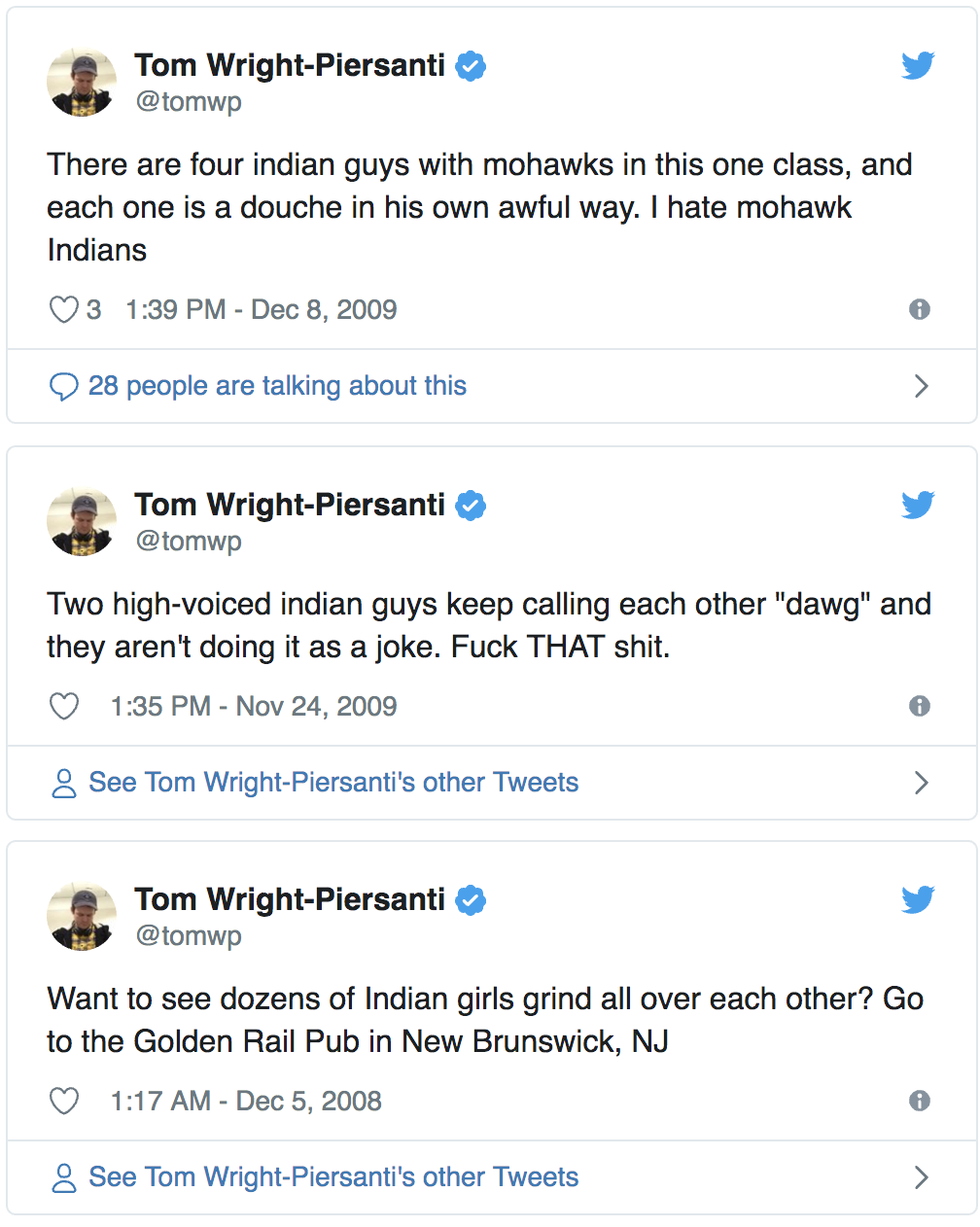 Jews, Indians, and other Asians as well:

Here’s his comment on a police car that looked like it had a menorah on the roof: 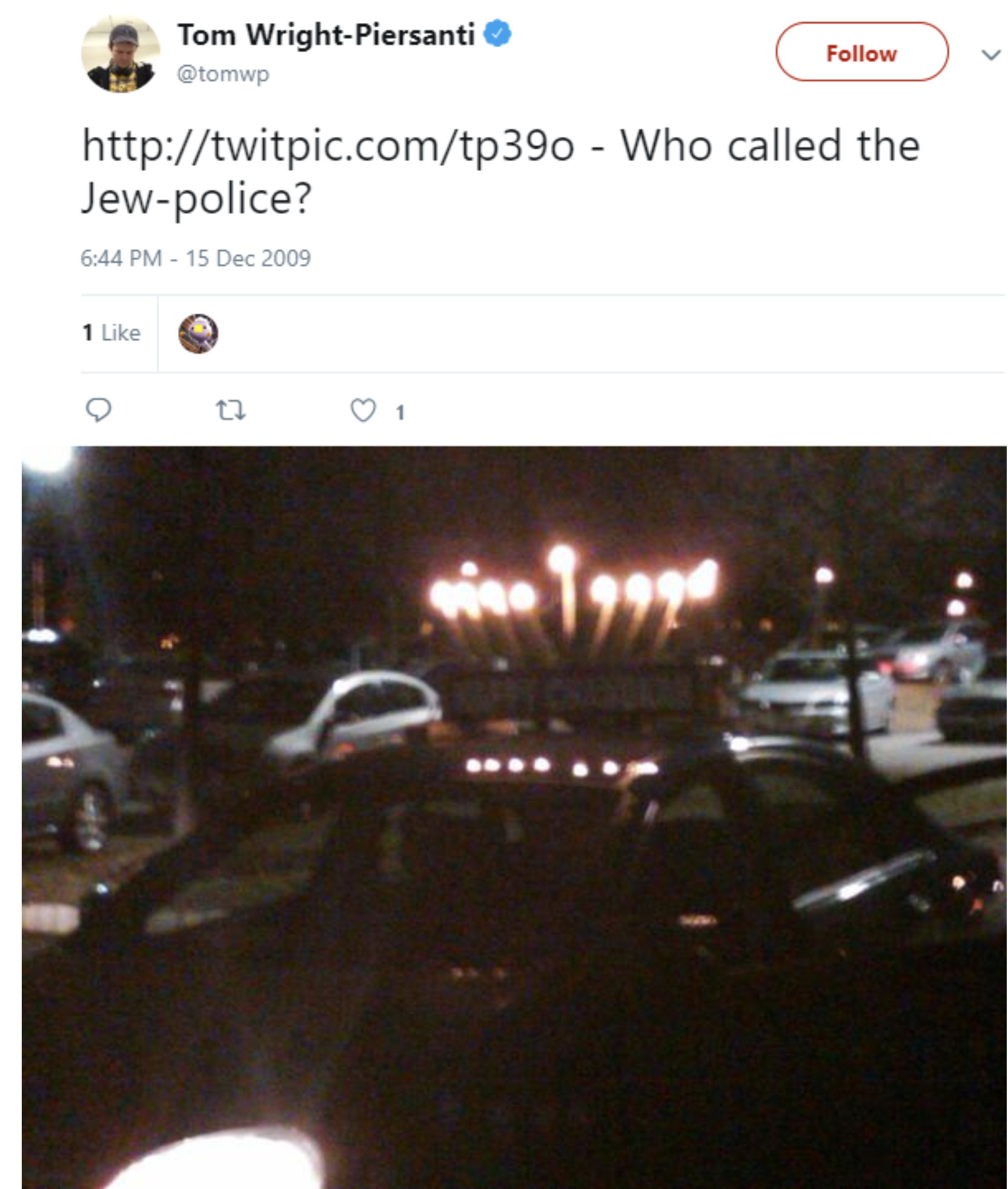 These don’t seem to constitute retaliatory humor of the Jeong-ian stripe.

As the New York Post reports, Wright-Piersanti has a long history of being what he called other people:

At the time of most of the objectionable tweets, Wright-Piersanti was working at the Star-Ledger in Newark. But he apparently had no love for some of his colleagues there.

“I am a ball of f–king rage. I HATE being talked down to by my peers. Fat, frog-looking bitch,” he tweeted in November 2010.

Wright-Piersanti’s Twitter page suggests he adores the word “douche,” which crops up more than a dozen times.

“He looks like a douche. His facebook page was totally open, I could have used a photo of him posing in front of a mirror like a girl,” he wrote on Feb. 18, 2011.

Wright-Piersanti joined the Times in 2014. But before he got there, he often blasted his future employer.

“What the NYTimes does is take your story, spice it up with a dash of *douche zest* and then a million people read it,” he tweeted on Oct. 13, 2010.

On Oct. 10, 2013, he was at it again, venting against a Times reporter who was dispatched to do a story from Montclair, NJ. “Maybe NYT was right to send a douche,” he tweeted before apparently quoting a line from an NYT story that offended him: “Montclair likes to think of itself as having more of a mix of races and classes than other suburbs.”

And on the Amish, he tweeted in August 2010, “I’m working on a tell-all expose of the Amish; calling it, ‘more like Pennsylvania Douche.’ ”

This morning I discovered that he’d made his Twitter page private, which is a shame because it was funny to see everyone calling him out, many with humor, for his history of bigotry. Before he made his page private he wrote this apology, which has also vanished:

I have deleted tweets from a decade ago that are offensive. I am deeply sorry.

And now what you see when you go there is this: 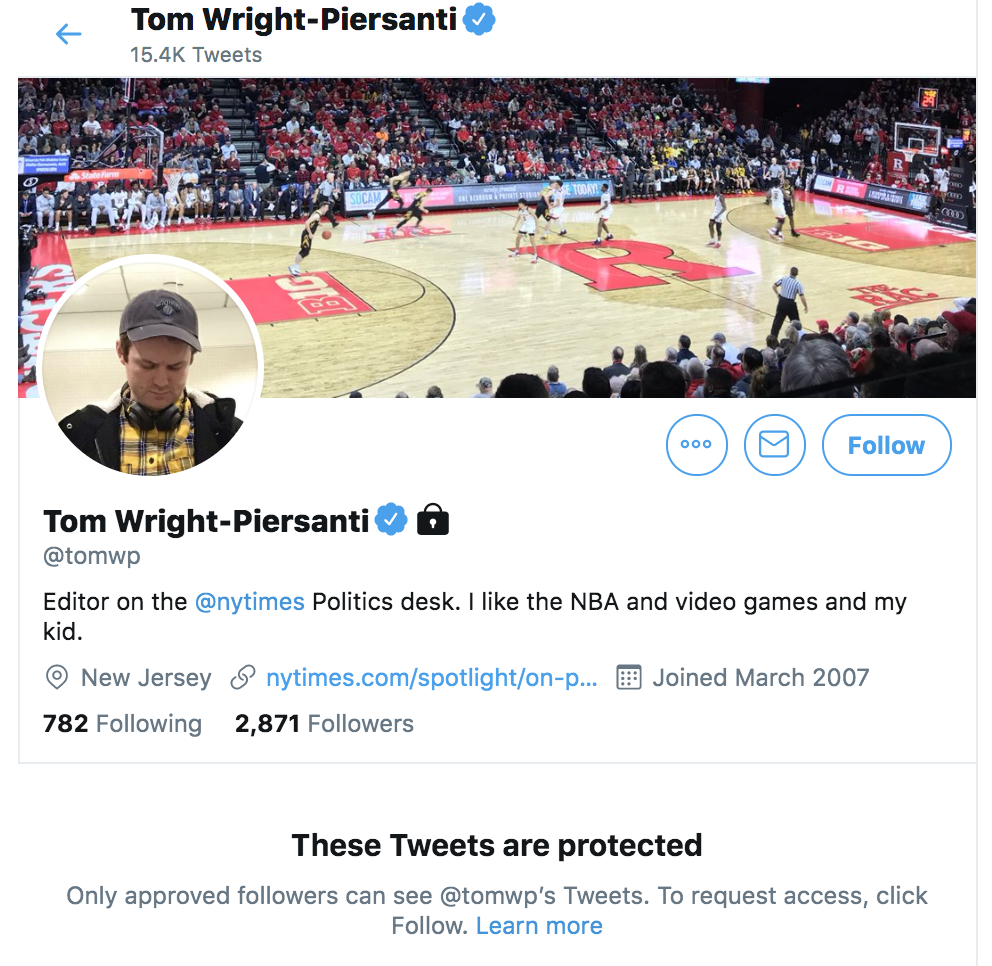 I’m not going to say that Wright-Piersanti should be fired. That would be up to his employer, the New York Times, and I have no strong feelings one way or the other. Perhaps he’s rehabilitated, though I think it’s awfully hard to root out this kind of bigotry.

But surely employees should be treated equally for equal transgressions, and it still rankles me that Jeong was given a pass while similar miscreants were fired or demoted (the Times just demoted another editor this week for past tweets that were seen as racist or insulting characterizations of four Democratic Representatives: Rashida Tlaib, Ilhan Omar, Lloyd Doggett, and John Lewis).