Here are all the readers’ cat photos I received up to noon Chicago time. All comments by readers are indented.

The first is from Elizabeth Belyavin:

This is my granddaughter Hazel’s cat, Clover. She was abandoned when very young and pregnant, stayed at a rescue centre until her kittens were weaned and rehomed and is now much loved by Hazel and all the family. Look at the antennae! 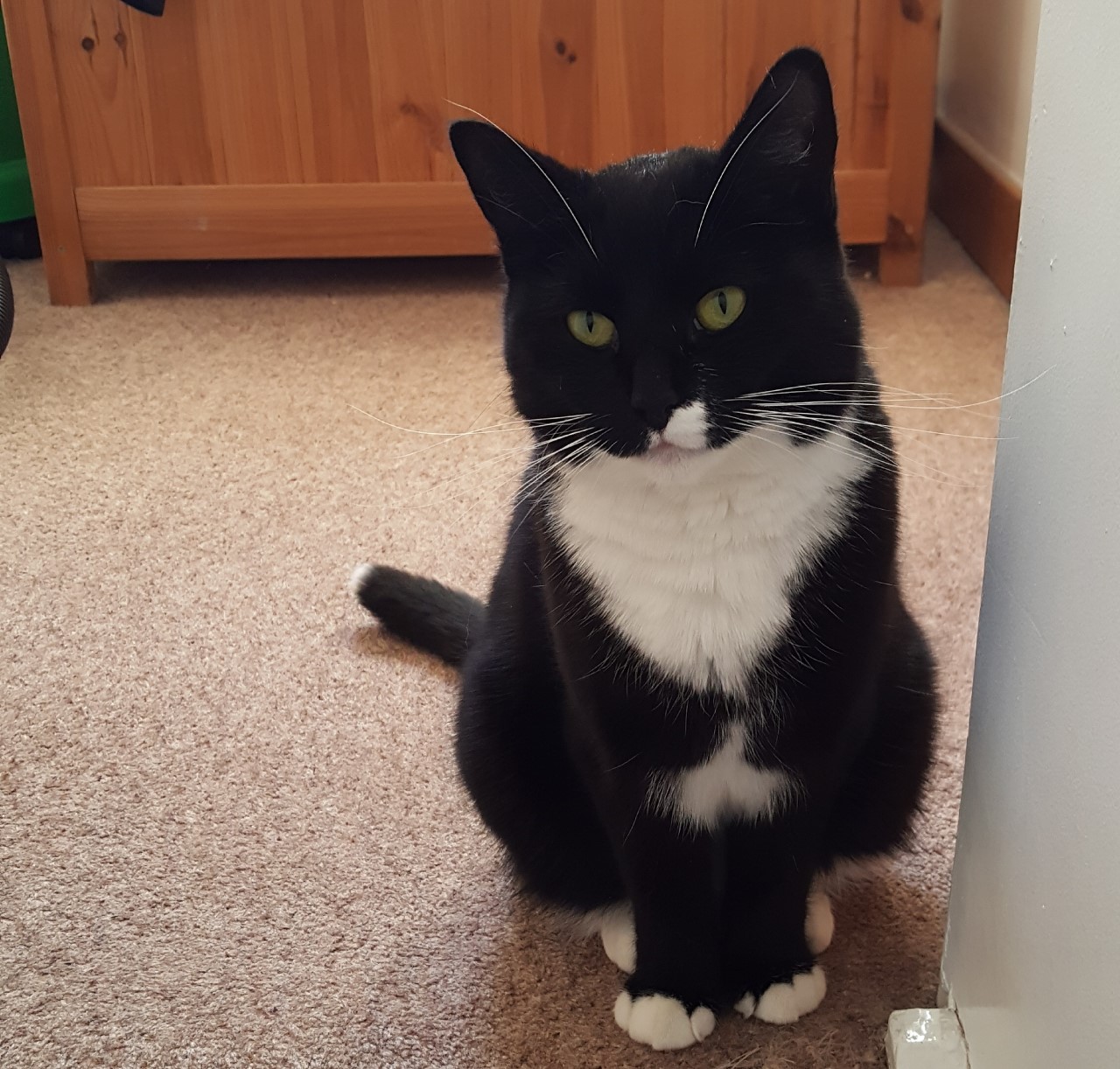 Our boys don’t get on that well but will nevertheless choose to sleep within a couple of feet of one another. Today they were sprawled in the shade about 6 feet apart but it proved impossible to take a good photo because George (tabby) insisted on sitting up and having a thourough wash (and we all know what that entails) while Bert (black and white, one-eyed wonder) continued his sprawl. Instead, have a photo from January when they both decided they needed to share my wife’s chair. 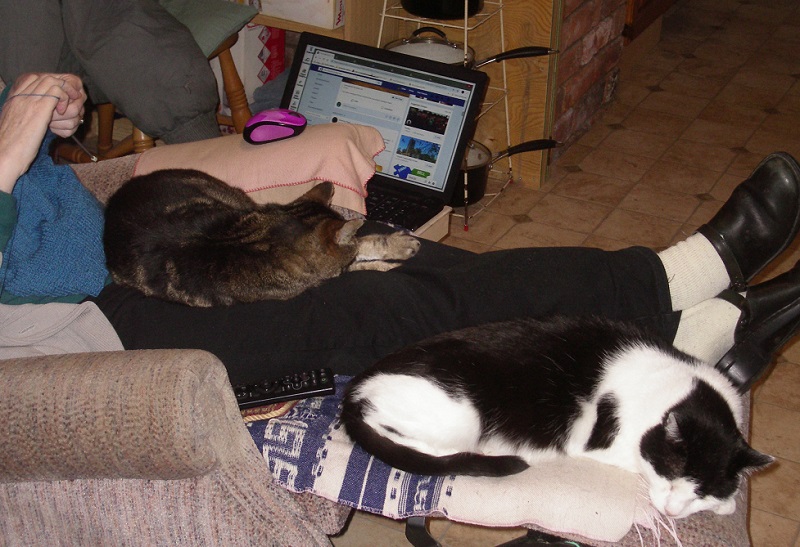 Here are a couple of pics of my boys, Jango and Boba. Jango (my silly imp) is in the box, and Boba rests on the bottom of the bookshelf.
Happy International Cat day! 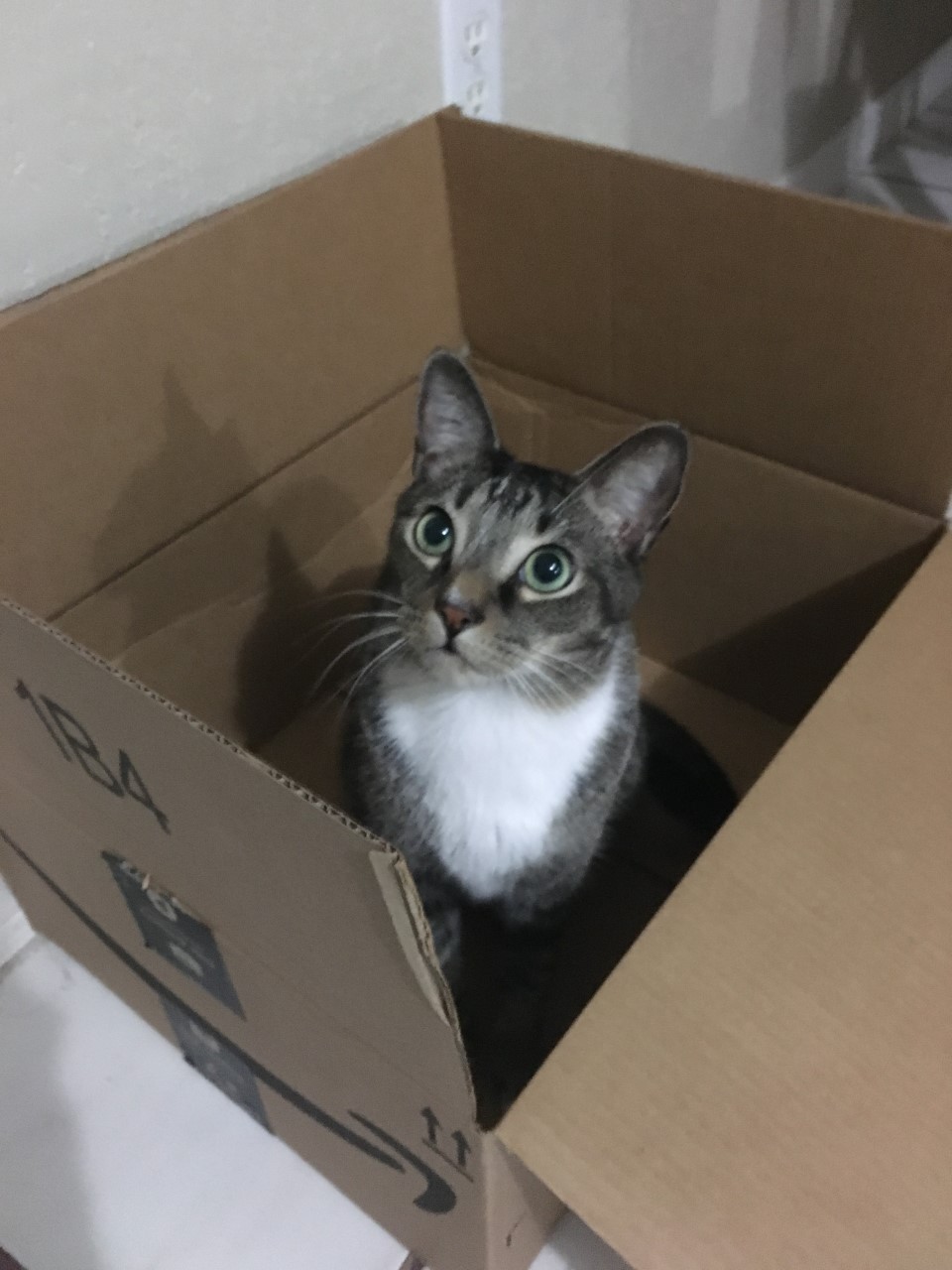 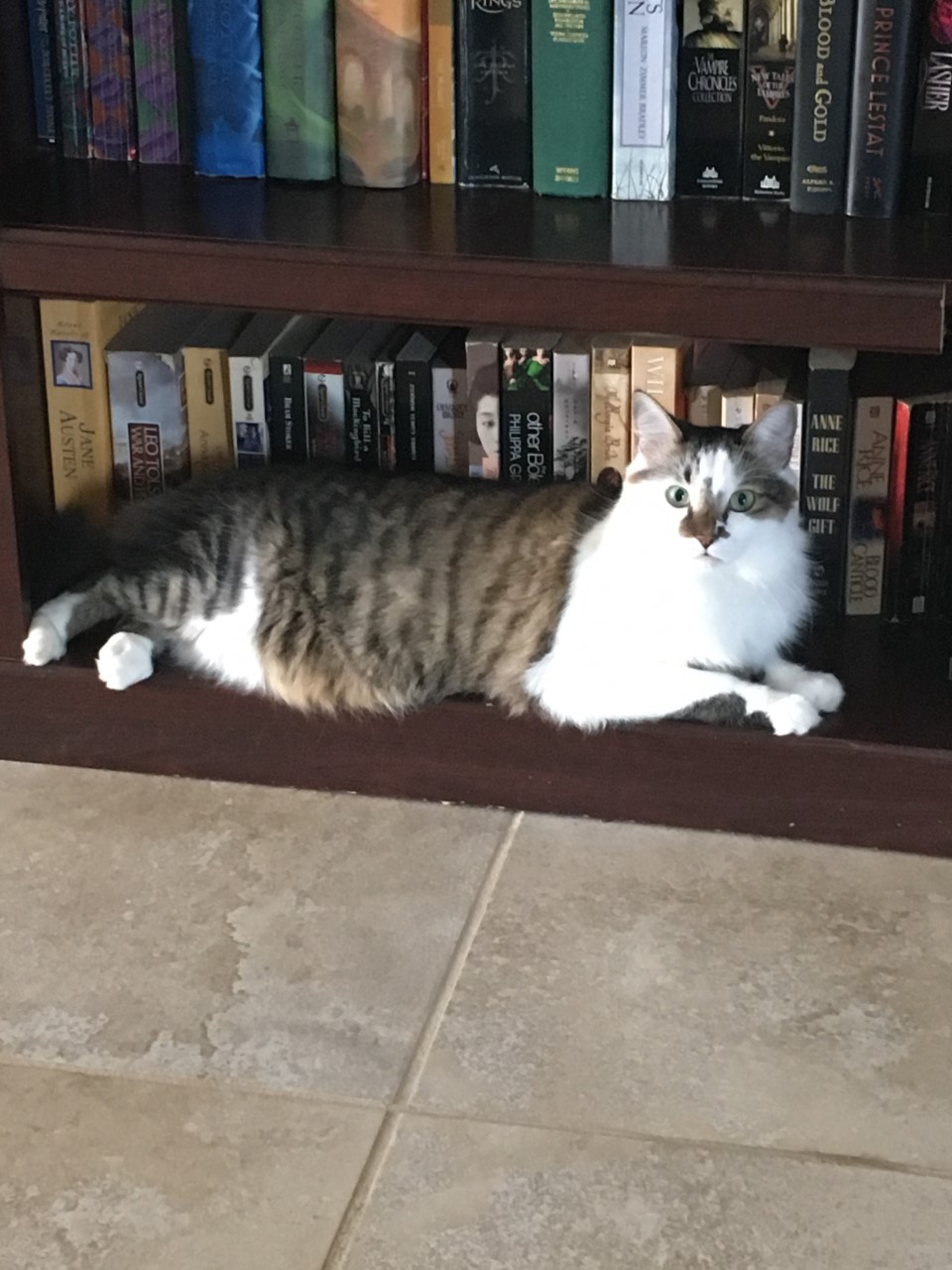 You have seen the lovely Clementine before, gracing our home in all seasons. Here she is in perfect yoga mode. Staff: Robin Branch, Boca Raton FL 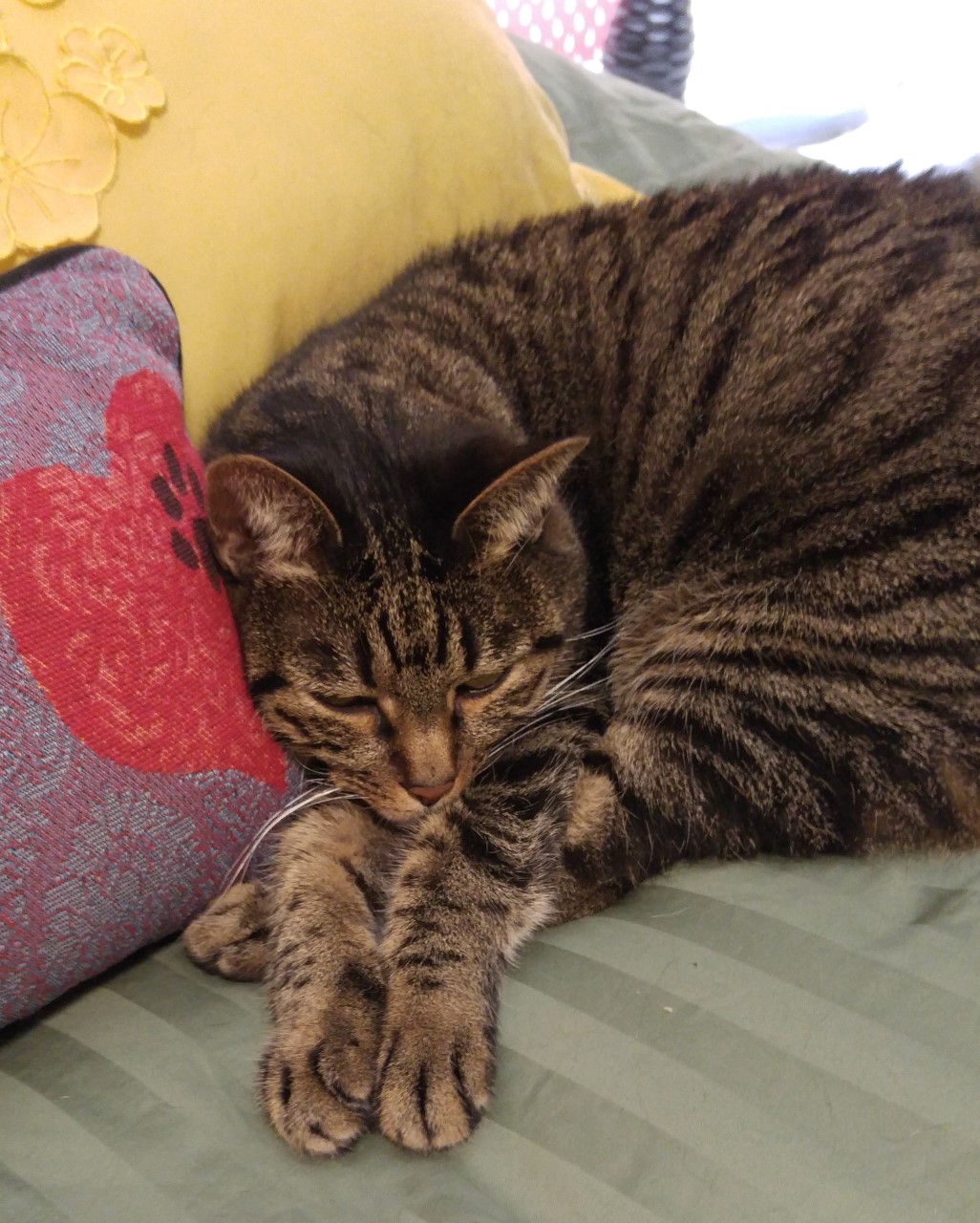 Happy International Cat Day! This is my new kitten, Cordelia (named for the good daughter in “King Lear,” though my other cat, Lloyd, thinks Lady Macbeth might be more appropriate). She was adopted in May, following the death of my very beloved Sophie. She’ll be a year old next Wednesday. She’s deaf, she may have some slight neurological issues, and she’s definitely bonkers. She likes tummy rubs, toys that light up, and picking on poor Lloyd. 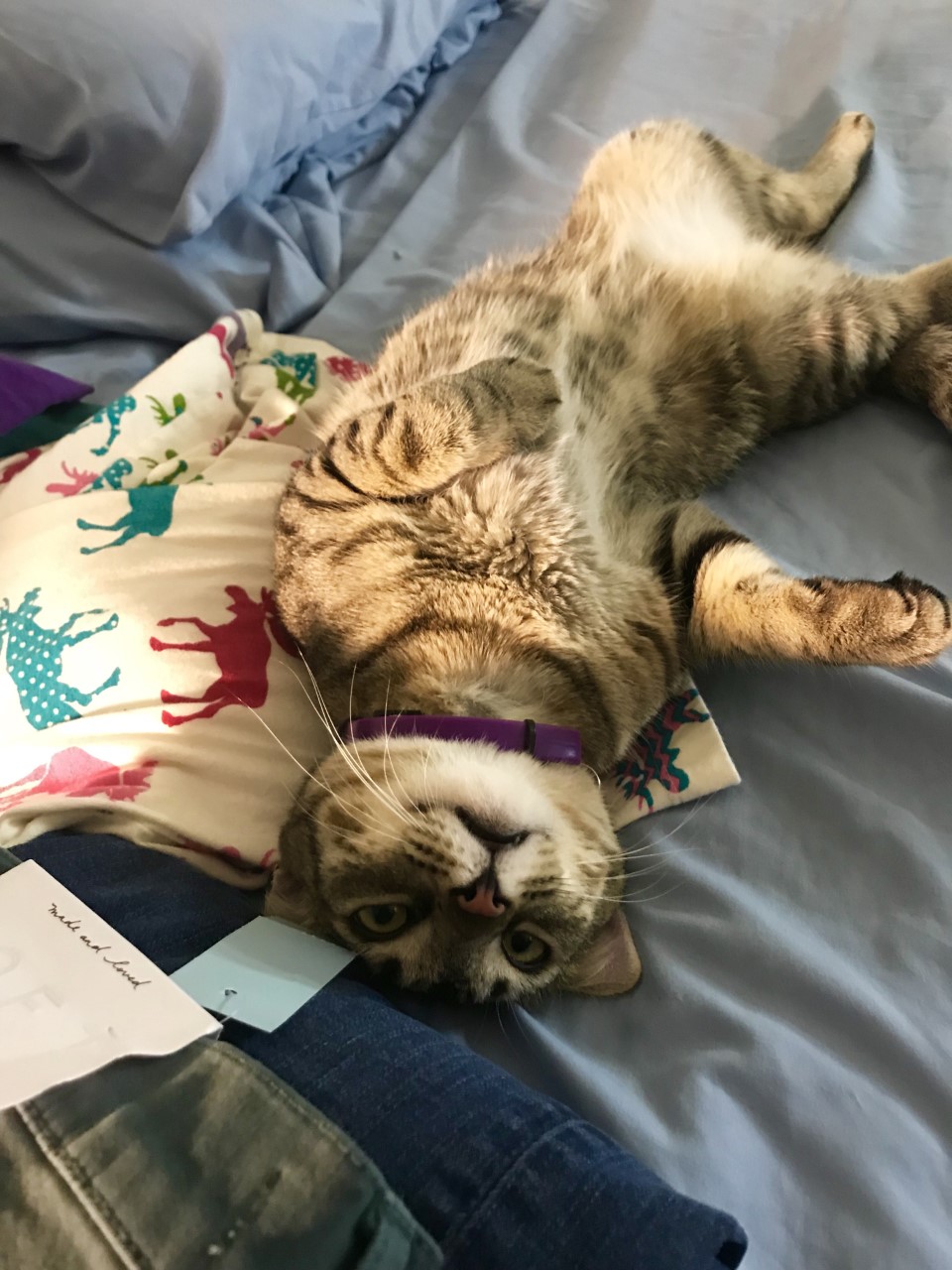 From the second reader named Robin: 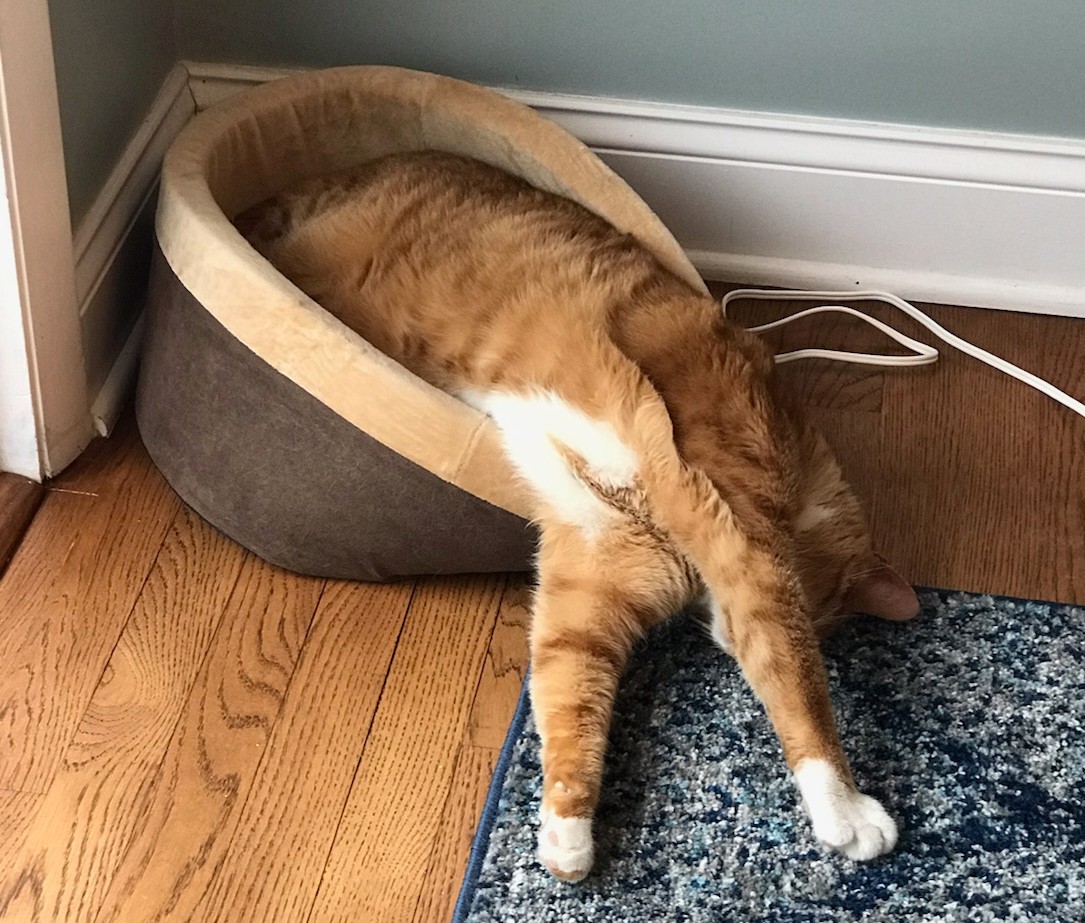 From reader E. A. Blair:

This is Isa, a Maine Coon mix adopted from the Wisconsin Humane Society in 2009, aged 5, which makes her 15.  She is a very sweet-natured cat, and will even leave her food dish for a cuddle, and scolds me whenever I return from an errand out of the house.  I was the second person to take her – she had been returned by a previous adopter because she “…demanded too much attention…”.  If she looks apprehensive in the picture, it’s because it was taken on her first visit to a vet.  She doesn’t go to the vet any more, because the Cat Doctor now makes housecalls. 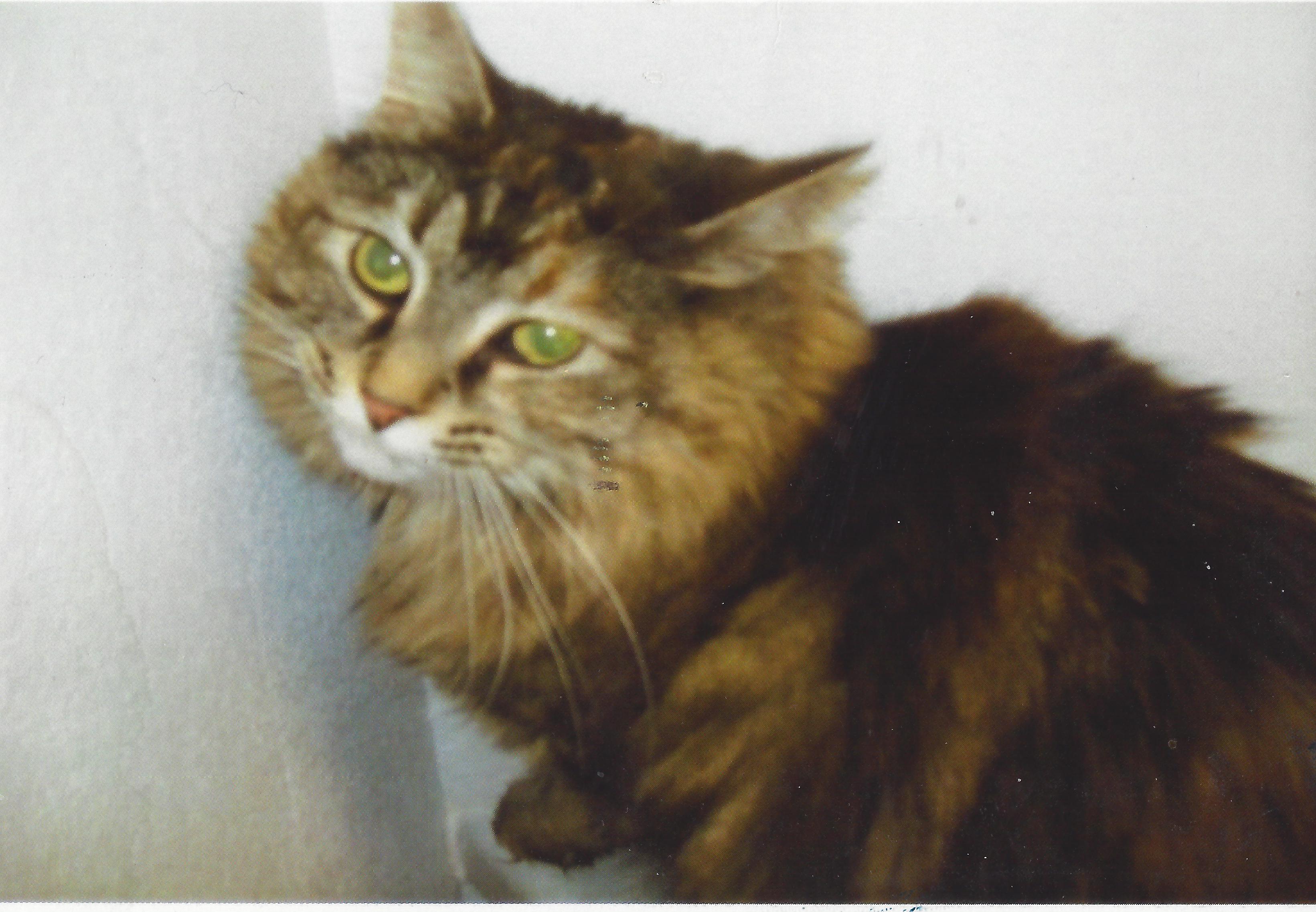 For #InternationalCatDay here is my boy Blue with his catnip toy. Blue was abandoned by his original miserable excuse for staff, then fed for months by a neighbor before he was brought to my attention. He is a bobtail and took to the indoors like it was his natural right. My sister sent him the Maine-made catnip toy. 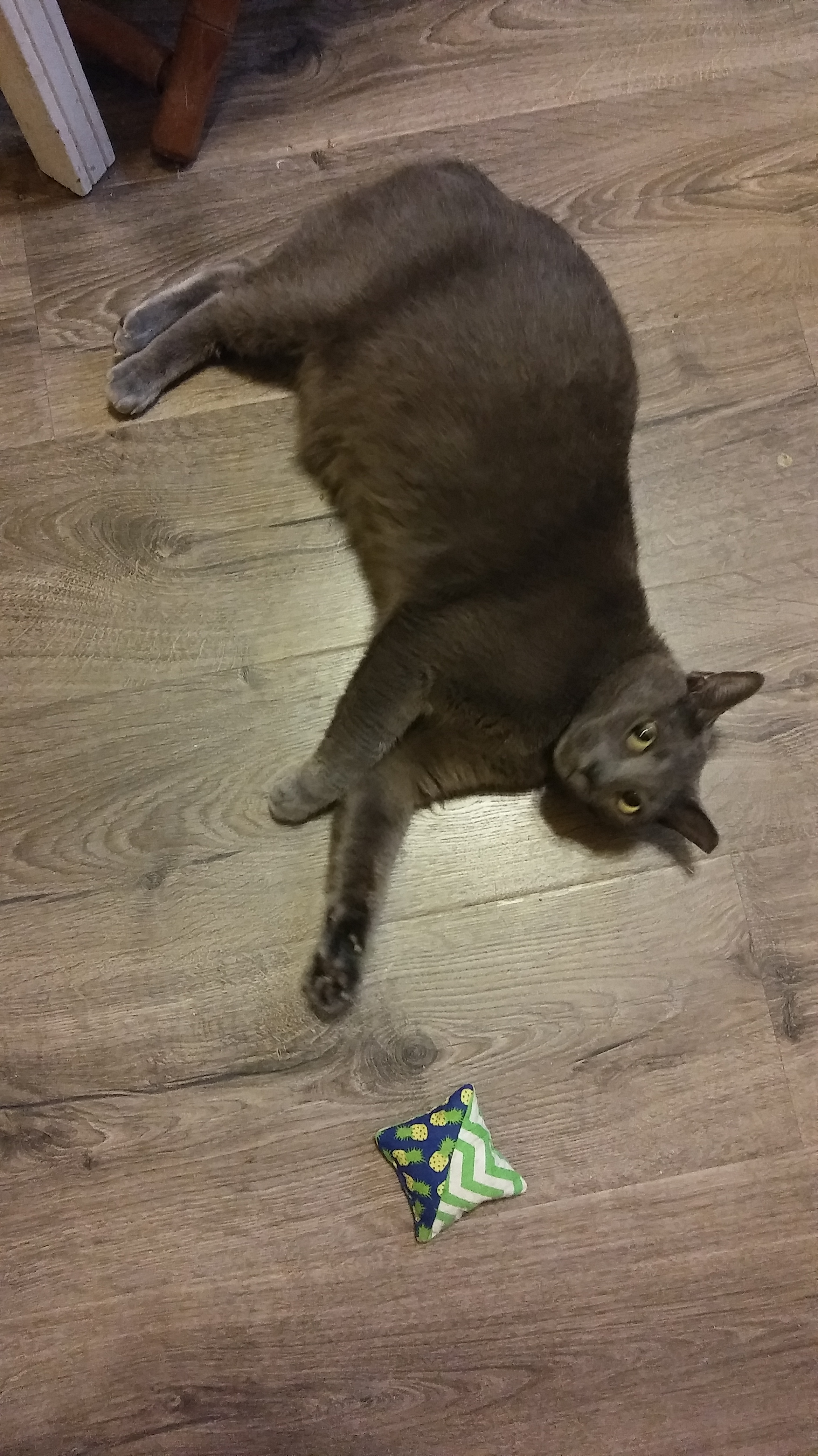 From my old friend Stash Krod, we have Qbit, who tells us: “Qbit, the quantum kitteh sez: ‘Happy International Kat Day!'” 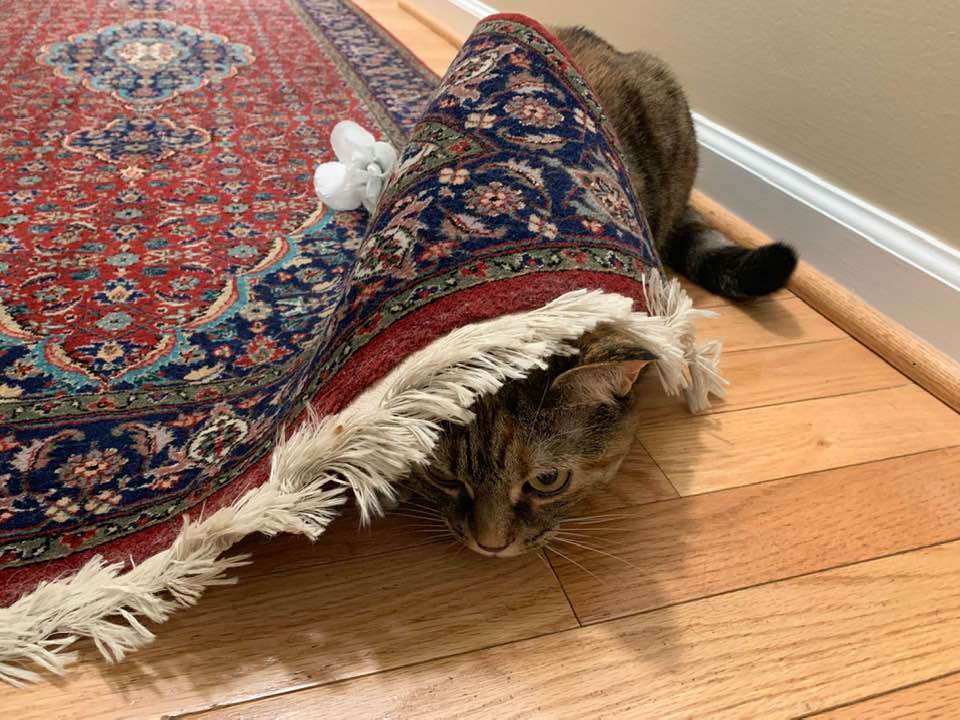 From Linda Calhoun, who also has a passel of black cats that I’ve posted before.

For International Cat Day!! Frida Katlo, top, and Mickey Mouser, bottom.  These were taken on July 22, their fourth birthday.   They were born the day after you left four years ago. They are the only two of my kitties that have never graced WEIT. 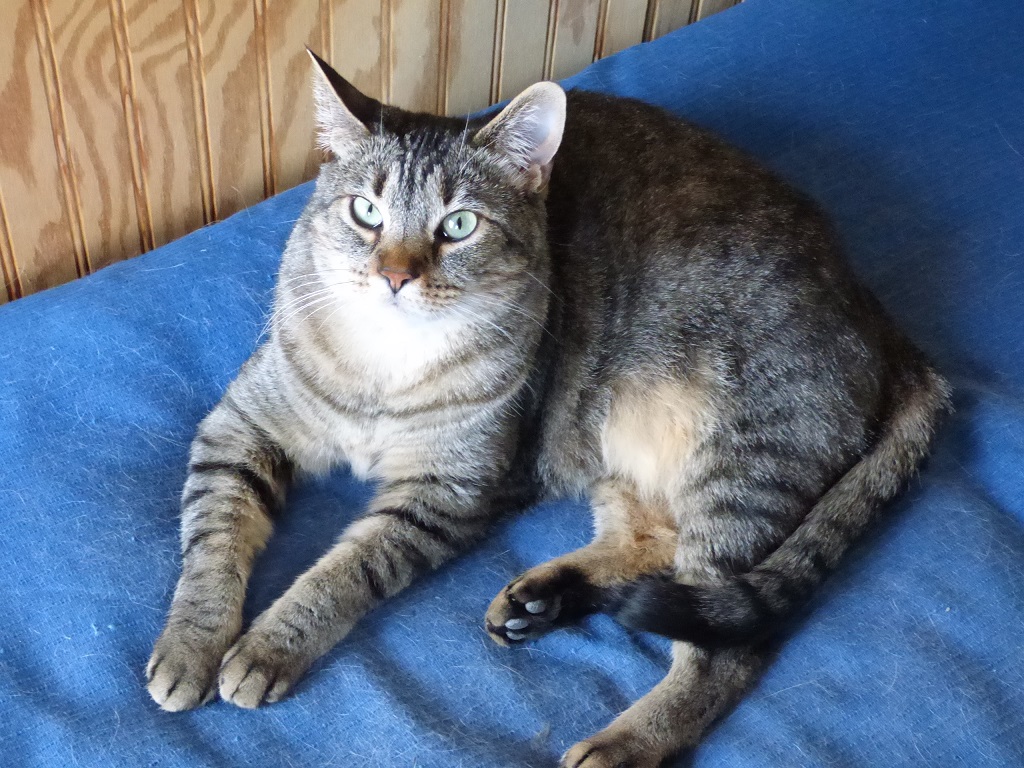 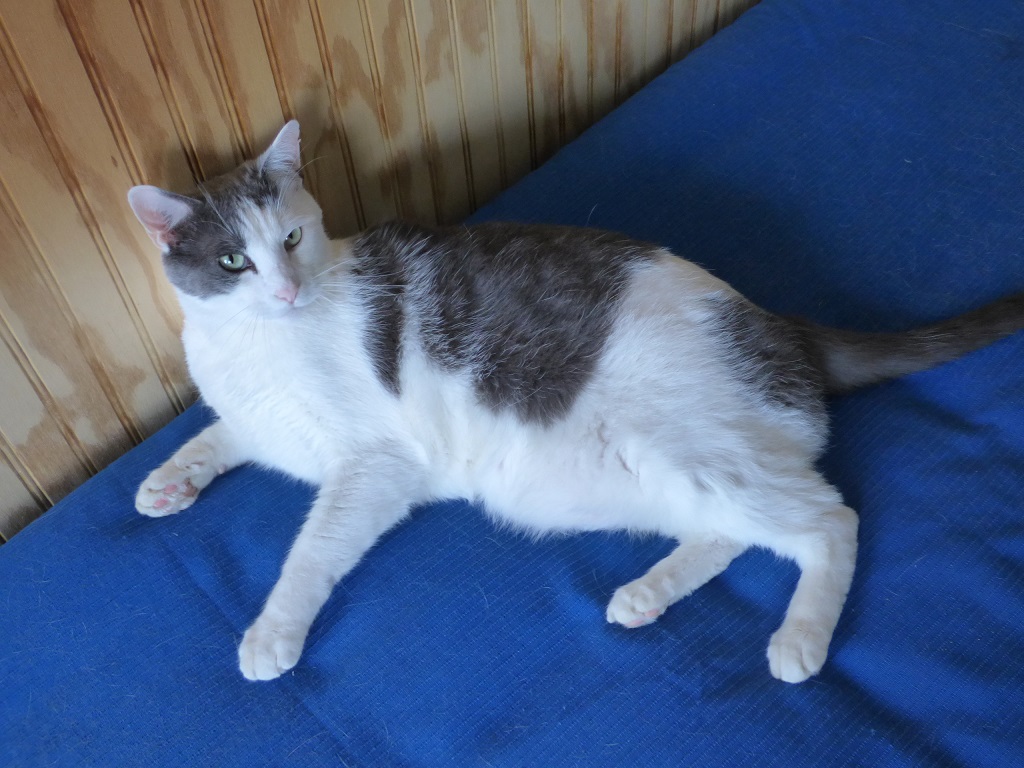 As suggested in today’s posting, here’s a picture of my new kitteh, Noodles.

His name is Ritchie. He’s one of my neighbors’ cat. And he is laid back, and has been enjoying the Montreal summer so far. Here I caught him napping, and so give the caption: “This cat is sleeping through International Cat Day. Whether it’s because he doesn’t know it’s International Cat Day or whether he could not care less, is unknown.” 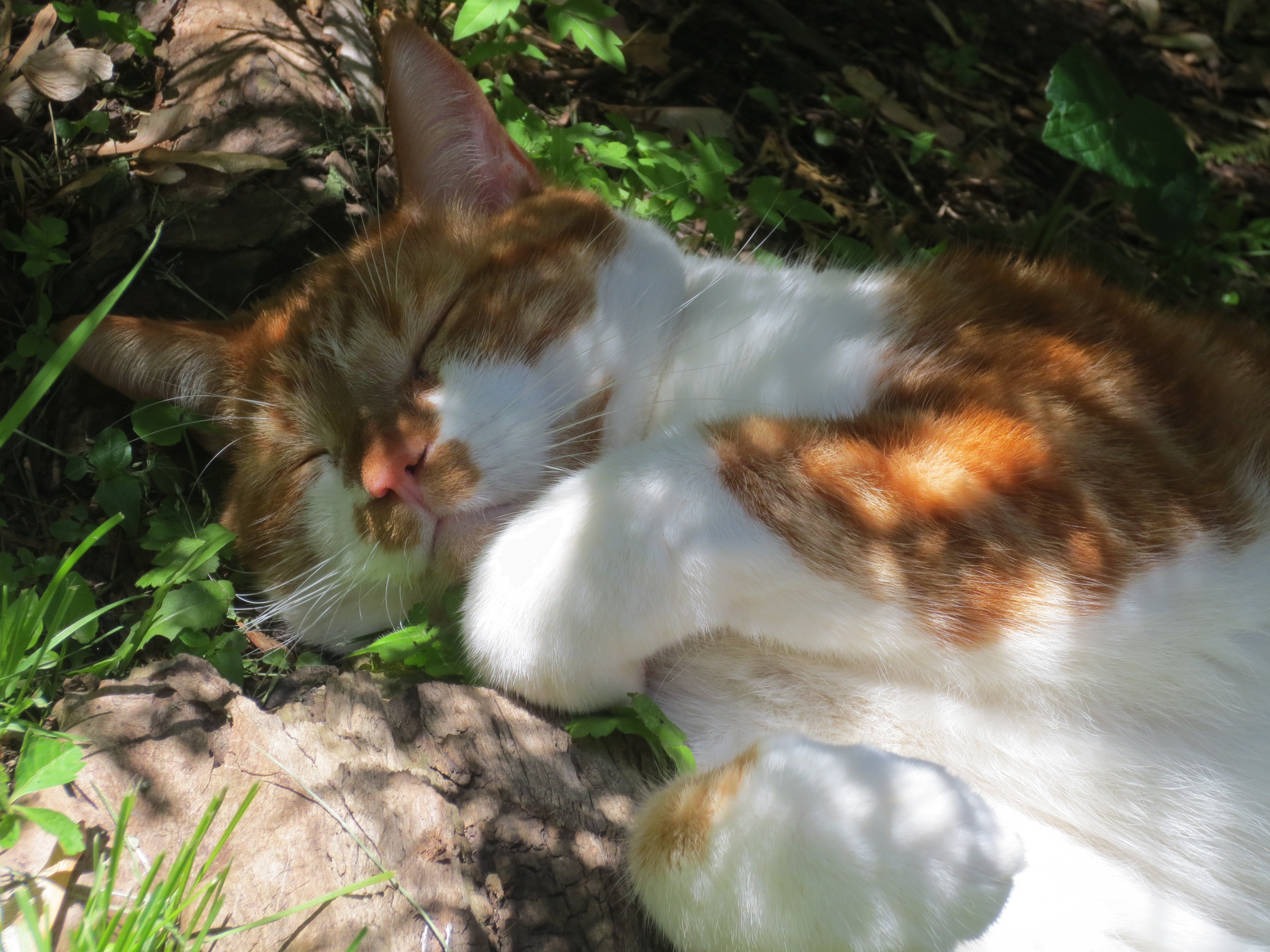 From Anna, who took care of the late lamented Frank the Kitten before his surgery. In thanks, I sent her a copy of my last book. She shows it with her cats: 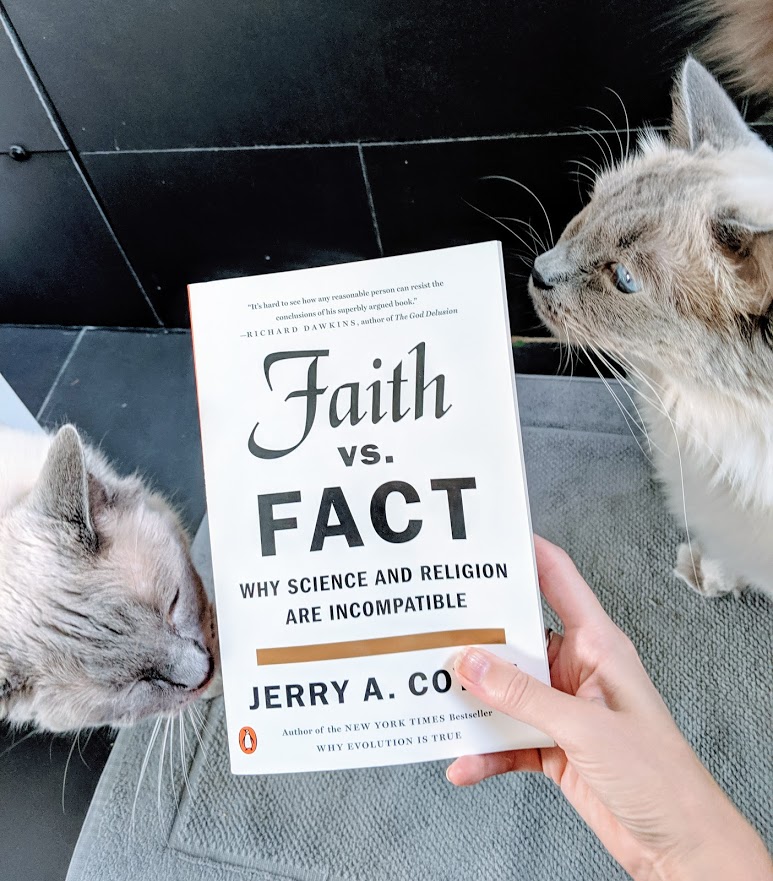 Pic 2 – “Lottie busy reading”
Lottie’s engrossed in her new book – can’t tear her away from it! Ever the bibliophile… ~ Anna, London 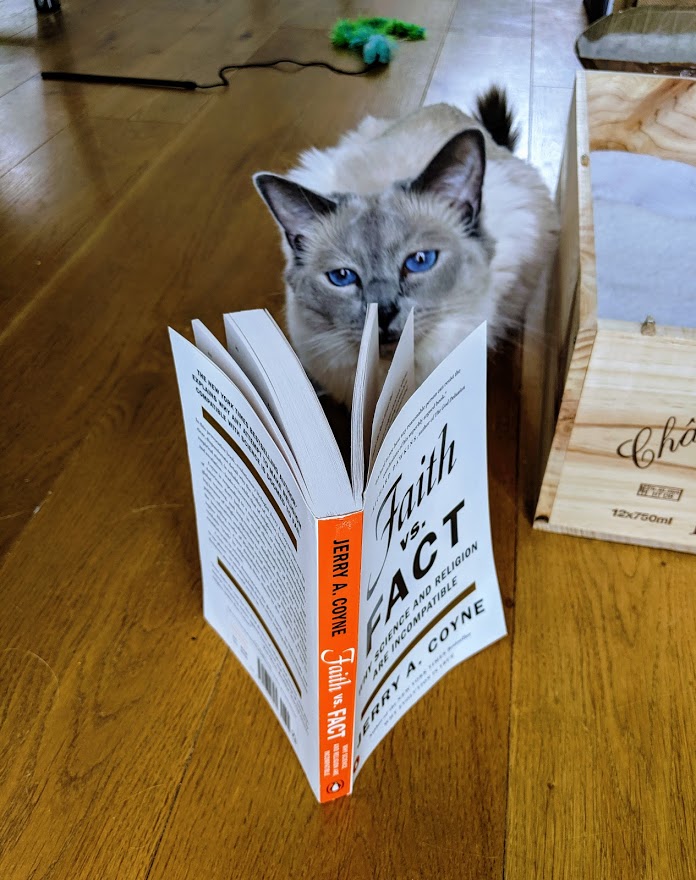 Here’s my girl Maggie; torties are the best! 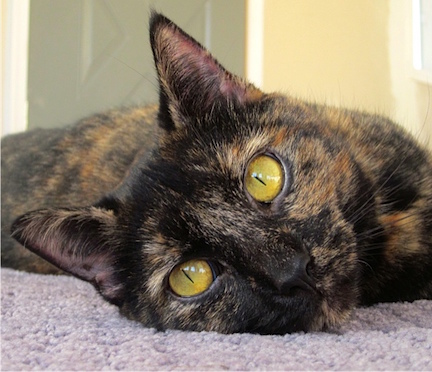 Heather Hastie sent her entry in late, but she’s in New Zealand and slept through the announcement. So I’ve given her a waiver, and here is her cat and her story:

Reilly adopted me when his family moved in next door in Easter 2018. Both adults are at work all day, and their son (who got Reilly as a kitten) is at boarding school. He’s a very curious and intelligent cat, and gradually we built up a relationship to the extent that he moved in. The neighbours still pay the vet bills, but they’re happy for him to live with me because he’s obviously happy. Also, they think he’s “not an affectionate cat”. He is affectionate with me.

I didn’t know his real name, and Jerry insisted I had to give him one, even though I mostly call him “Kitty”, and he answers to that. My mother suggested “Reilly” because she thinks he has the Life of Reilly at my place. (I eventually found out his real name is Stanley, but I still call him Reilly.)

These pics are (clockwise from top left) Reilly on his bed on my bed, objecting to me opening the curtains by burying his face; refusing to get out of the way when my home help is trying to vacuum; responding to Jerry calling out to him from Skype; pre-Jerry calling him: 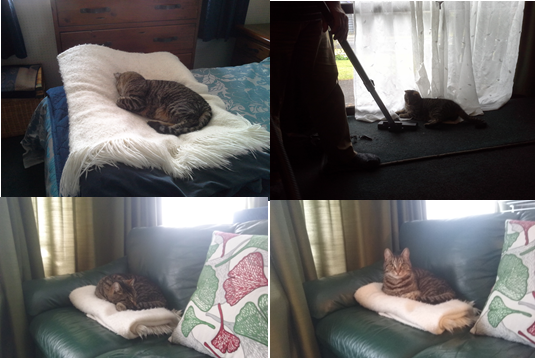