Reader Kevin called my attention to this new paper in Biology Letters about a giant fossil parrot found in New Zealand (click on screenshot for link, reference at bottom; pdf is here).

For eleven years a pair of large fossil bird bones (16-19 million years old)—two fragmentary “tibiotarsi”—languished in the Museum of New Zealand. Thought to belong to an eagle or duck (what duck, though, would have a partial tibiotarsus 7 inches long?), this paper’s re-examination shows that they are actually parrot bones. Here, by the way, is where the tibiotarsus is: 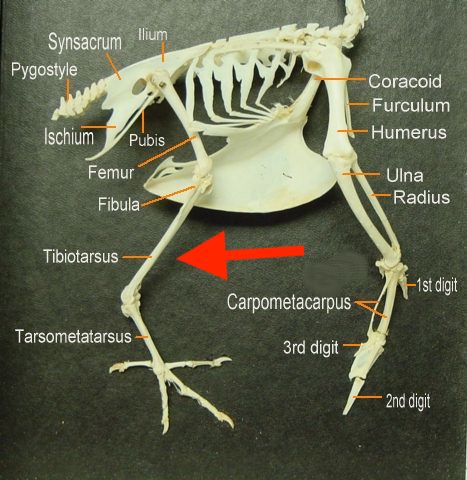 And to the left in the figure below are the two bones (dated between 16 and 19 million years old), with the scale bar being 2 cm: At the left are the bones of the ancient parrot. The two bones at the right are a comparison parrot, the extant Strigops habroptila, the famous flightless kakapo, also from New Zealand and weighing about 1.5-2 kg (3.3- 4.4 pounds). The kakapo is the world’s only flightless parrot, but the authors argue that H. inexpectatus was also flightless. 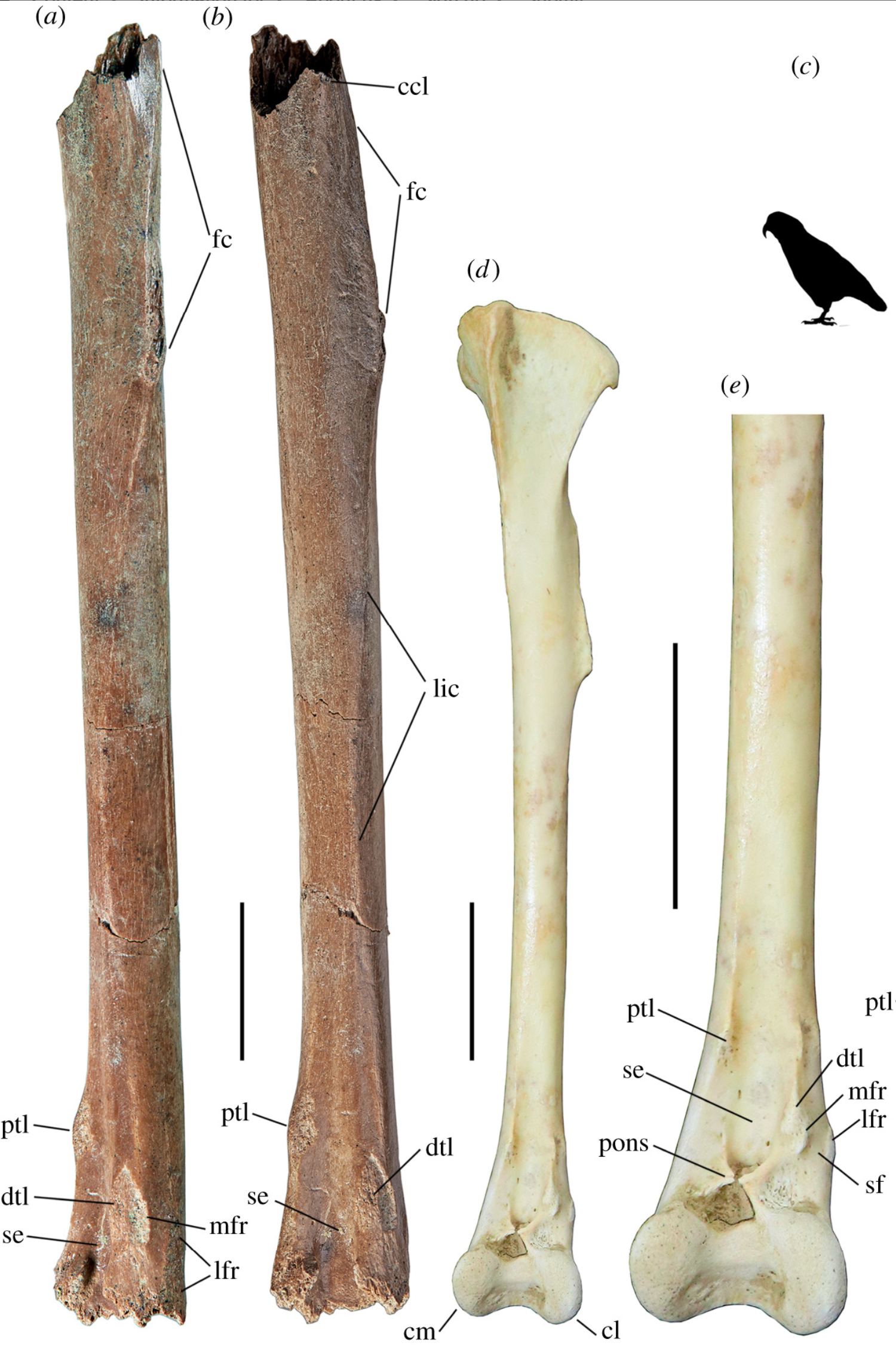 How they identified these bones as belonging to a parrot rather than another bird is above most of our pay grades, but I’ll just give a snippet to show how it went (this is an excerpt from more than a column of “comparisons”:

The named this ancient parrot Heracles inexpectatus. Here’s how they came up with the name:

Etymology: The nestorid Nelepsittacus from the St Bathans Fauna was named after Neleus. This much larger psittaciform is named after the Greek Heracles, who in Latin was known as Hercules, and who killed Neleus and his sons, except for Nestor. Genus gender masculine. The specific epithet denotes the unexpected nature of this find.

Let’s assume they’re right that it was a parrot, and I have no reason to think they’re not. What we have, then, is a giant parrot, singing in the choir invisible, inferred from the bones to be about a meter tall (39 inches  and weighing about 7 kilograms—about 15.5 pounds. That’s about four times the weight of the kakapo, up to now the world’s heaviest known parrot. H. inexpectatus was a monster, and here’s a figure showing the size of this bird relative to a human, taken from a BBC article on the find (credit: PA media). (The bird to the left is unidentified, but looks to me like a magpie.) 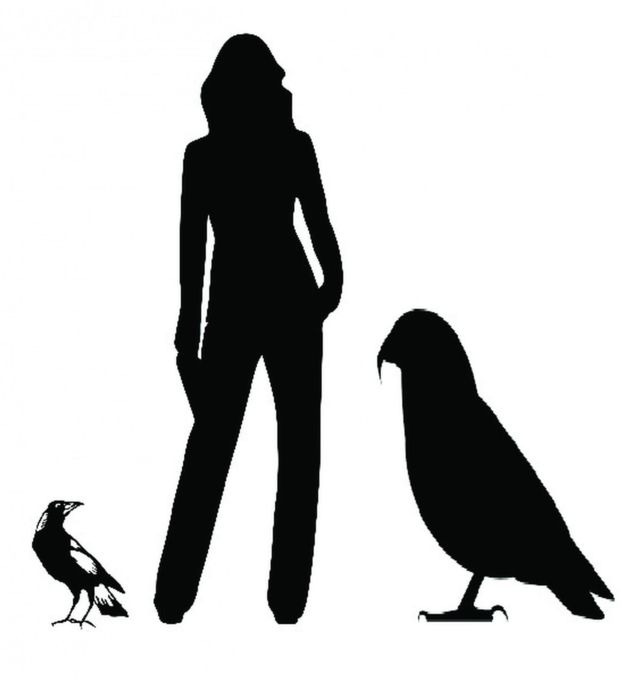 Why do they think it was flightless? Well, it was huge, the bones are robust, and it lived on an island. Island birds are often flightless, evolving loss of flight due to an absence of mammalian predators, and New Zealand had no native mammals. (There was a giant predatory eagle that ate other birds.) Ergo the flightless kiwis evolved there, as well as the kakapo and a large variety of flightless moas, with one of the nine known species standing fully 12 feet tall with the neck extended, and weighing about 230 kg (510 lb).

Like many flightless birds, the moa went extinct, killed off for food by the native Maori. (The kakapo is also endangered, with all living individuals relocated to a predator-free island.) Just for grins, here’s a skeleton of that big moa that I photographed in Auckland in April of 2017: 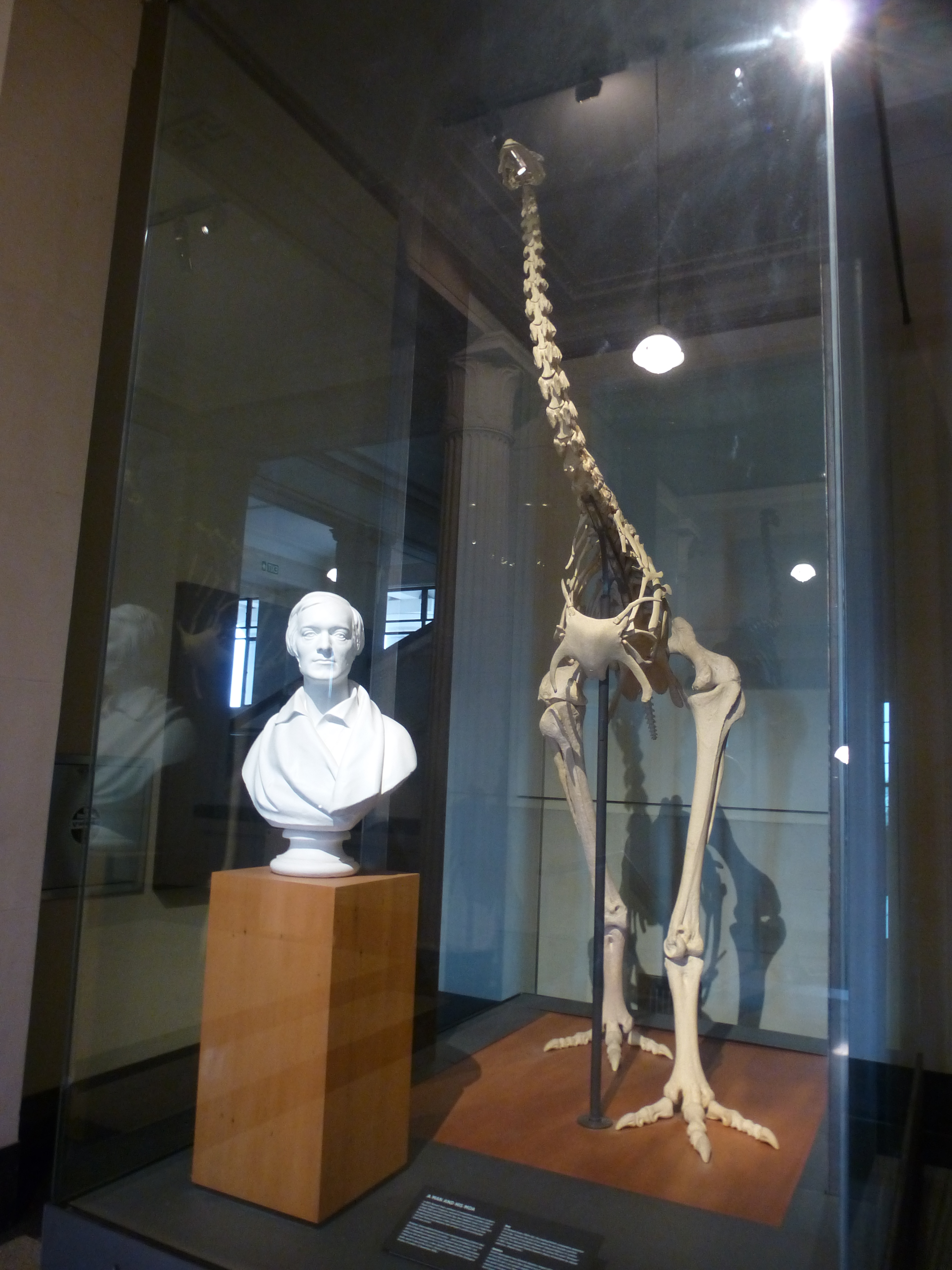 What did it eat? There has been speculation that its size could enable it to prey on other birds, including parrots, and at least one parrot, the kea, is partly carnivorous, devouring the fat on the backs of sheep. And its beak would have been huge and formidable, capable of cracking just about any organic material. But, as the first author Trevor Worthy told the BBC, “It probably sat on the ground, walked around and ate seeds and nuts, mostly.”

We’re not sure if it could fly—probably not—but what we do know is that this is by far the largest parrot known to date, and the world’s only known giant parrot. Here’s one guess about what it looked like.

20 thoughts on “An ancient giant parrot in New Zealand: one meter tall and weighing fifteen pounds!”