This week’s Jesus and Mo strip, called “golf”, came with an email note:

Based on this story from The Freethinker.

The story, in fact, relates how Rochester Cathedral is converting its medieval nave, at least for a time, into a miniature golf course, complete with bridges so that young folk can learn about bridges and their engineering. I thought at first this was a joke, but it doesn’t seem to be. Here’s a mockup of what’s envisioned: 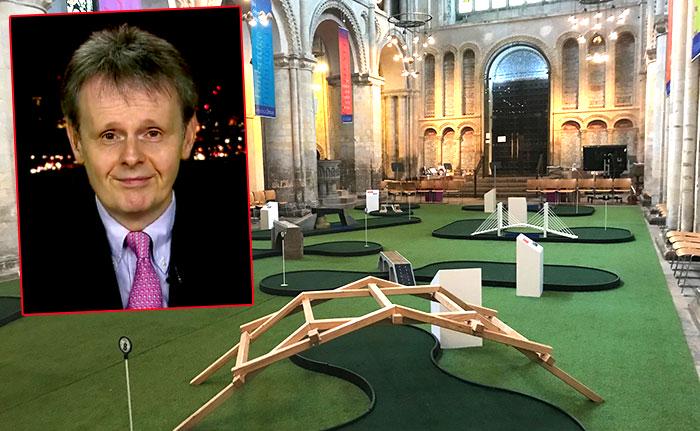 The only reason for this, which isn’t stated, is the declining attendance of the Church of England, so that geegaws like this have to be built to entice the flock back into the fold. And of course some Church officials are peeved:

Dr Gavin Ashenden, former chaplain to the Queen, above, who deserted the Church of England after the Koran was read in Glasgow Cathedral, told Church Militant:

The Church of England, suffering a reductio ad absurdum, has turned its Catholic cathedrals into entertainment centres. Having lost contact with transcendence, majesty and holiness, the C of E has become a branch of the leisure and entertainment industry. Since they no longer know what a cathedral is, or what it is for, it is indeed time for them to return them to the Church that conceived, built and knows how to honor and use them.

Ashenden, Bishop of the Anglican Episcopal Church, also expressed his fury to the BBC, saying:

I’m afraid I think it’s a really serious mistake, perhaps born of desperation. The idea that people are so trivial that they can be almost tricked into a search for God by entertaining them with a golf course is a serious-category error.

One honest Canon, however, admits that they’re doing this to put butts in the pews:

Cathedrals are very confident at the moment to innovate and have events like this and to tell people about our faith in Jesus which is what we’re all about. The Archbishop of Canterbury said to us that if you don’t know how to have fun in cathedrals then you’re not doing your job properly.

At any rate, here’s Mo’s take on the tricking-out of the Cathedral: 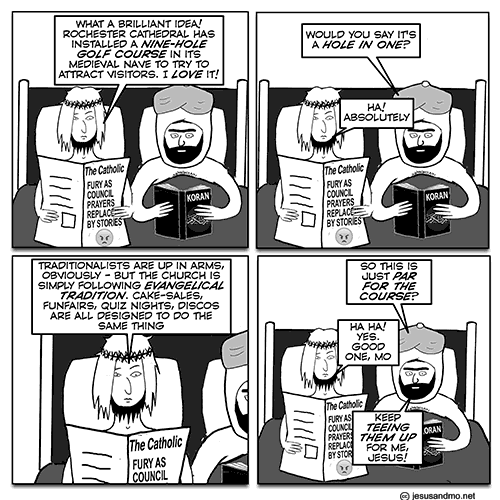