Evolutionary ecologist Bruce Lyon has returned from Alaska with another batch of fantastic photos. It was, he told me, the trip of a lifetime, and he got to see species he’d only dreamed about. But I’ll let him give the show and tell (his words are indented). There will be, as I understand, several installments of this odyssey.

In June I attended the annual meeting of the American Ornithological Society in Anchorage, Alaska. It’s a long way to Alaska, so a couple of side trips (i.e., boondoggles) seemed reasonable. I visited two ornithological hotspots that have been on my wish list for at least 40 years—St Paul Island, famous for seabirds, seals and vagrant birds, and Point Barrow, the northernmost point of land in the United States, famous for ecological studies of tundra wildlife and recently a site for lots of climate change research.

Below: St Paul Island (circled in red) is one of the four volcanic Pribilof Islands in the middle of the Bering Sea, 300 miles from mainland Alaska, 500 miles from Russia. St Paul and St George are the main larger islands and there are two other dinky islands close to St Paul (Otter and Walrus). 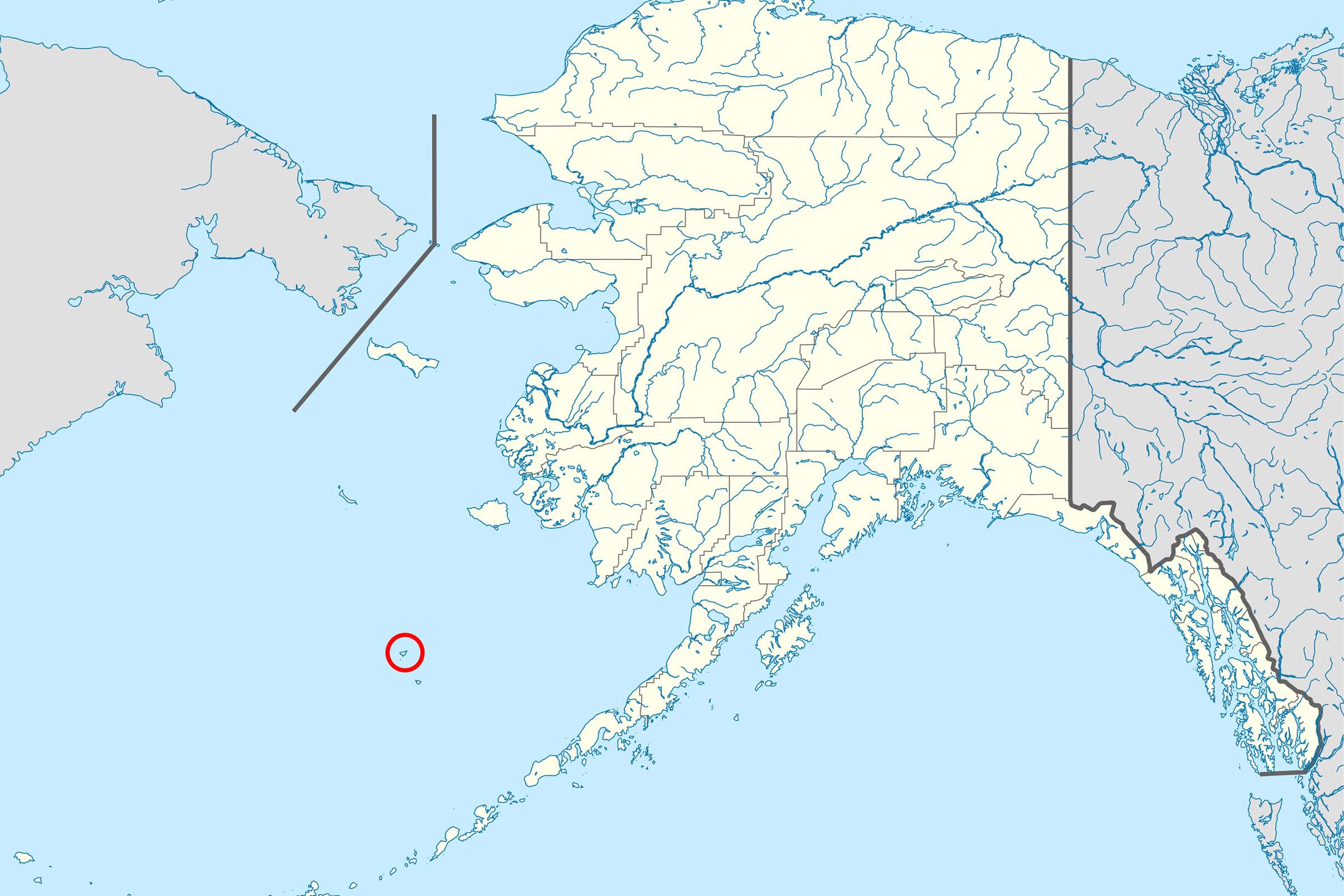 Below. My traveling companion was Bob Montgomerie, a professor of Evolutionary Biology at Queen’s University in Kingston, Ontario. It was fitting to visit Alaska with Bob because my first experience studying behavioral ecology of arctic birds was with him in 1980. That year, Bob began longterm study of arctic birds at Sarcpa Lake on the northwest side of Hudson’s Bay, and he gave me a summer job helping set the study up.

As an aside, since it is summer and Jerry and readers sometimes list books that make good summer reading, let me recommend a book. Bob, Tim Birkhead and Jo Wimpenny wrote a wonderful book about the history of ornithology called Ten Thousand Birds: Ornithology Since Darwin. In the posts for WEIT I sometimes refer to ideas or studies from the ornithological literature. Any readers who enjoy these aspects of the stories I write about would probably enjoy reading Ten Thousand Birds. The book also covers a bunch of topics that Jerry sometimes discusses, including the group selection controversy, evolution of life history and social behavior, and speciation, to name a few. 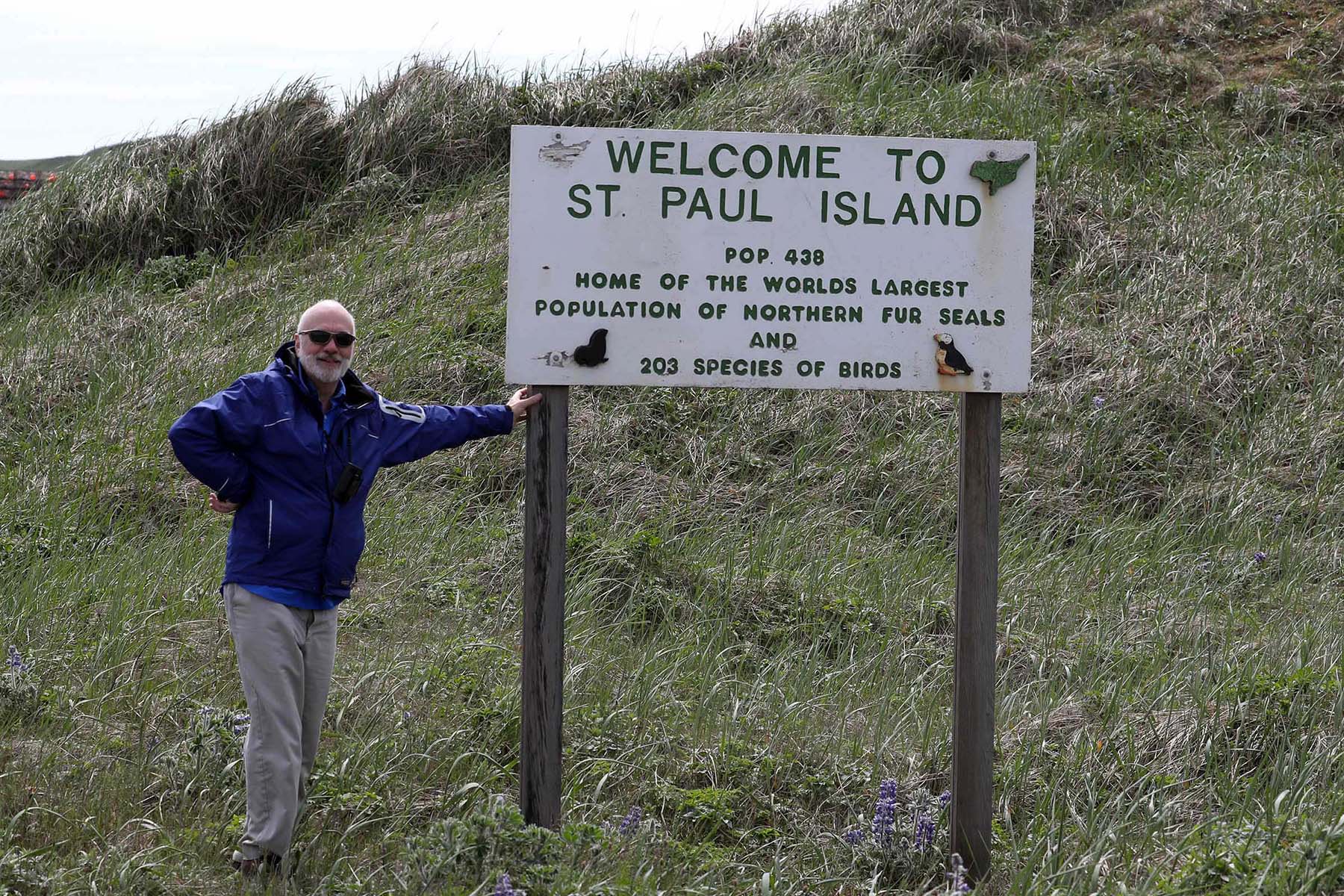 Below: Part of the town of St Paul. Note the Russian Orthodox church in the photo. Most of the people on St Paul are Aleut people—people indigenous to the Aleutian Islands. Interestingly, they mostly seem to have Russian surnames, a reflection of the long connection with Russia. The Pribilofs, originally in the sphere of Russian influence before Alaska was sold to the United States, were “discovered” (for Europeans) by Gavriil Pribylov in 1786.  Pribylov, worked for a private company but apparently disobeyed his instructions to visit the Kurile Islands north of Japan and instead stumbled on St George Island. According to Wikipedia, he was told about the general location of the islands by the son of an Aleut chief. However, the day Pribylov found St George was very foggy and he could not see the island but instead homed in on the calls of the massive number of fur seals on the island. Pribylov then found St Paul the following year. 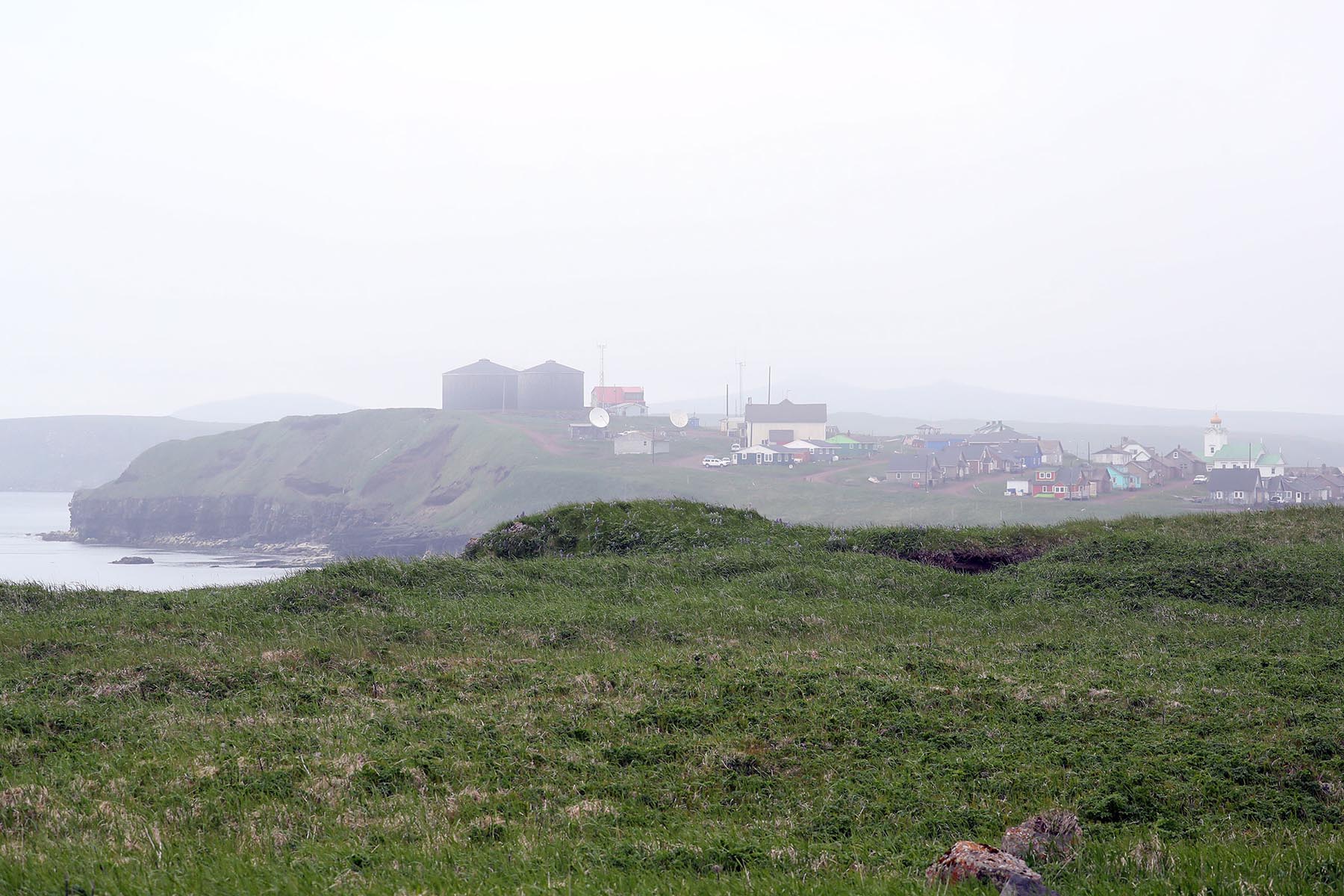 Below: Photo I pinched from online of Aleut men working at a seal processing plant in the 1920s. They are salting seal skins. The Russians were excited to find the Pribilof islands because at the time they were home to something like 4 million Northern Fur Seals (Callorhinus ursinus) whose fur made them a very valuable commodity. For many decades there was a large commercial harvest for the fur (and meat too?) and the history of the islands is tightly linked with the seals and sealing, told here in a nice story. Although commercial harvesting ended in in 1984, scientists indicate that the population has plummeted by 80% in the past couple of decades, for reasons that are not entirely clear. The local still harvest seals for food but the numbers are too small to account for the massive declines.

On the plane to St Paul, I sat beside an Aleut woman (with a Russian surname) who told me that the Aleuts were brought to St Paul against their will by the Russians to work in the seal industry as slave labor. I could not confirm this online but perhaps some readers know about this history? 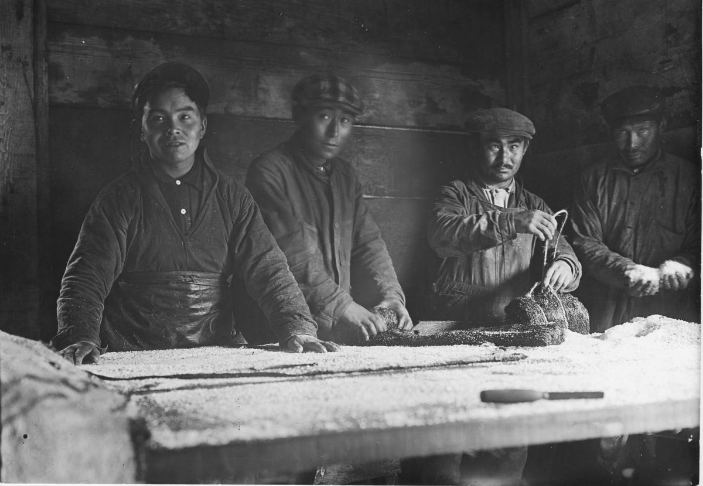 Below: St George Island, 40 miles to the southeast of St Paul. Given how close it is to St Paul, and its visibility, that fact that Gavriil Pribylov did not see St Paul when he first found St George must have been due to dense pea soup fog. The two islands are similar in some ways but the much taller cliffs at St George house much higher densities of seabirds than those at St Paul.  In 1982 a detailed census found some 200,000 seabirds on St Paul (spread out over the fairly larger perimeter of the 13-mile long island) and 10 times this number at St George. 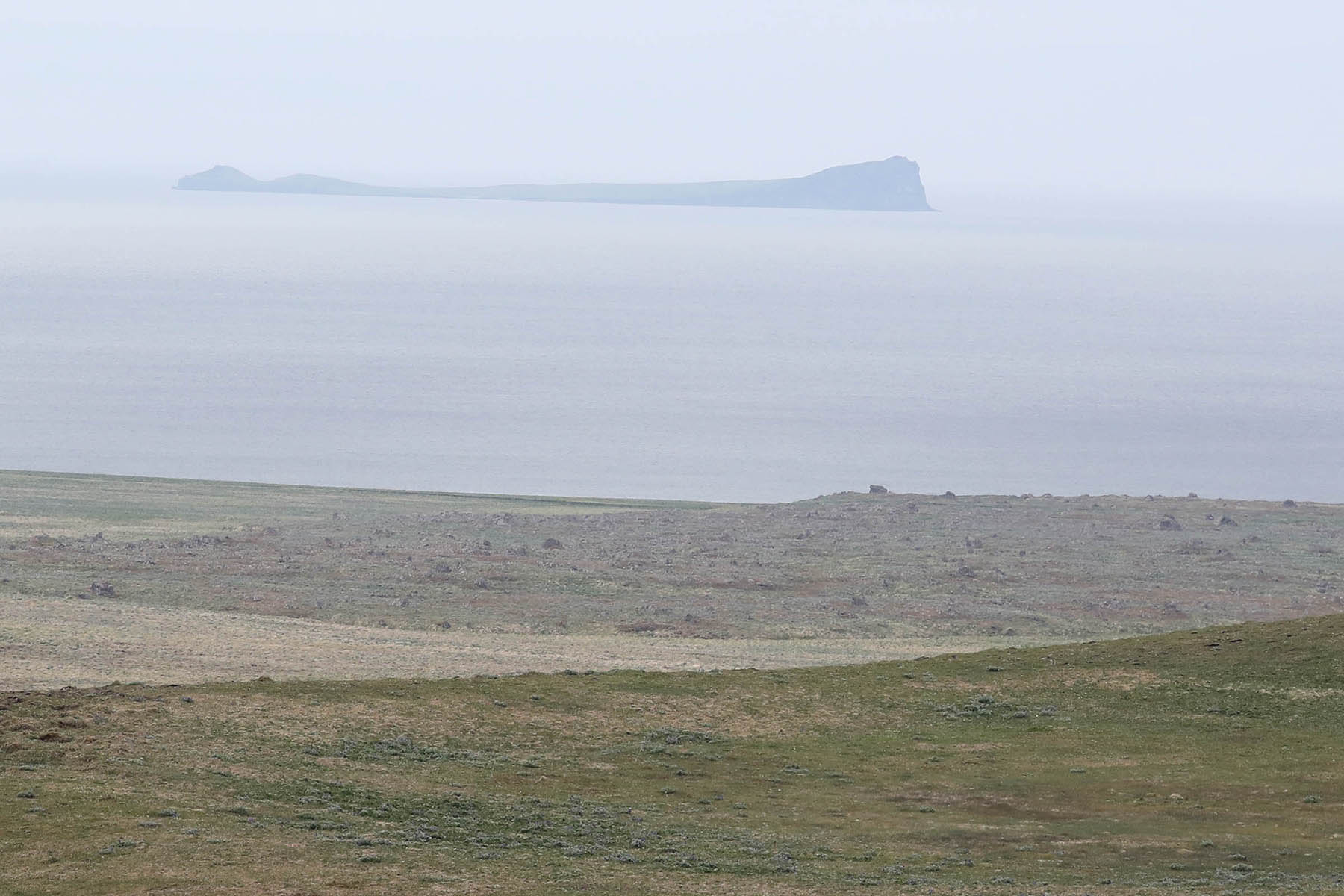 Below. The cliffs at St Paul that are home to 11 breeding species of seabirds (more details on the individual species in later posts). If you look closely at the photo you can see little groups of seabirds sprinkled on the cliffs. 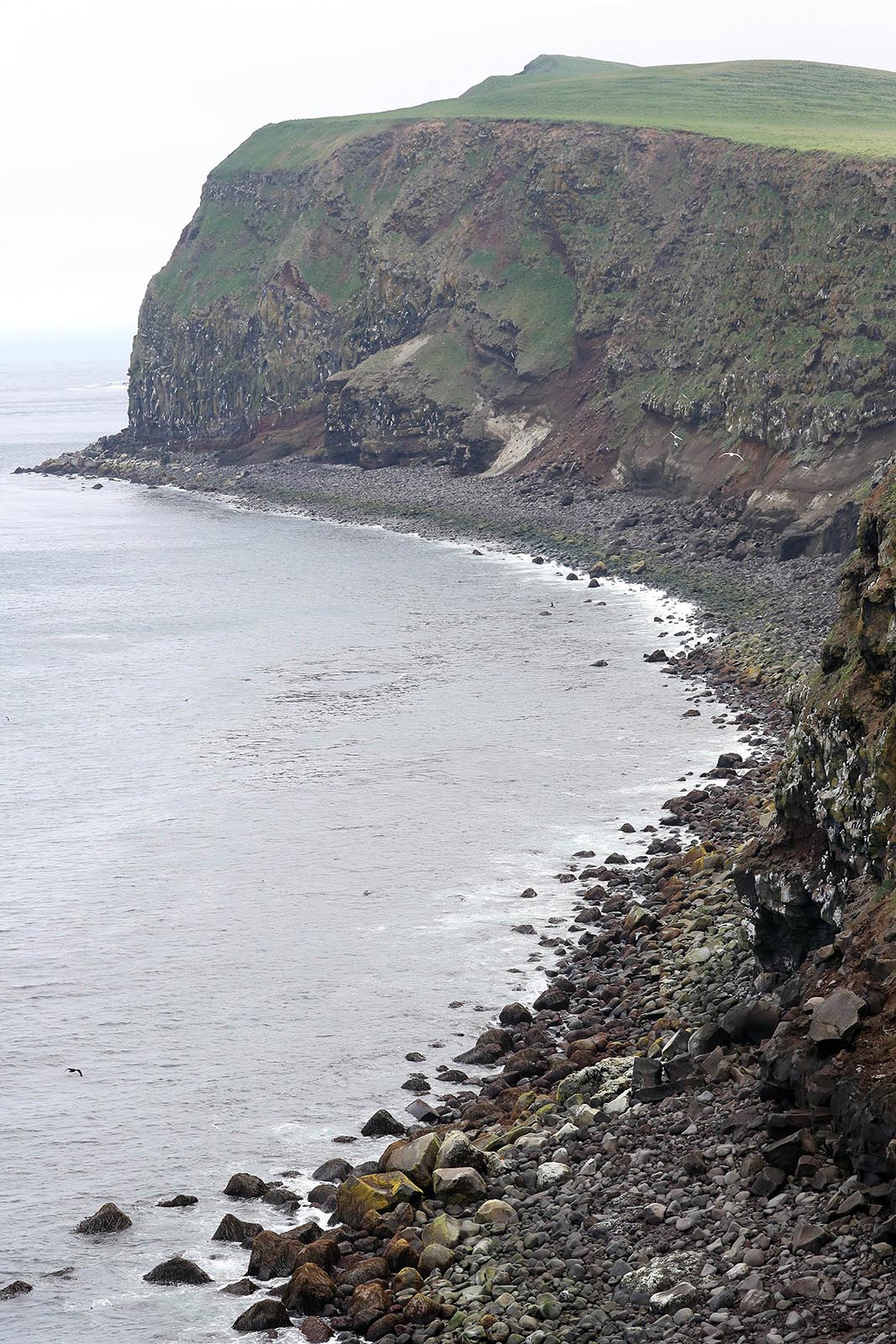 Below: One seabird photo as a teaser.  A section of cliff with a single Horned Puffin (Fratercula corniculata) framed by lots of Black-legged Kittiwakes (Rissa tridactyla) and Thick-billed Murres (Uria lomvia). 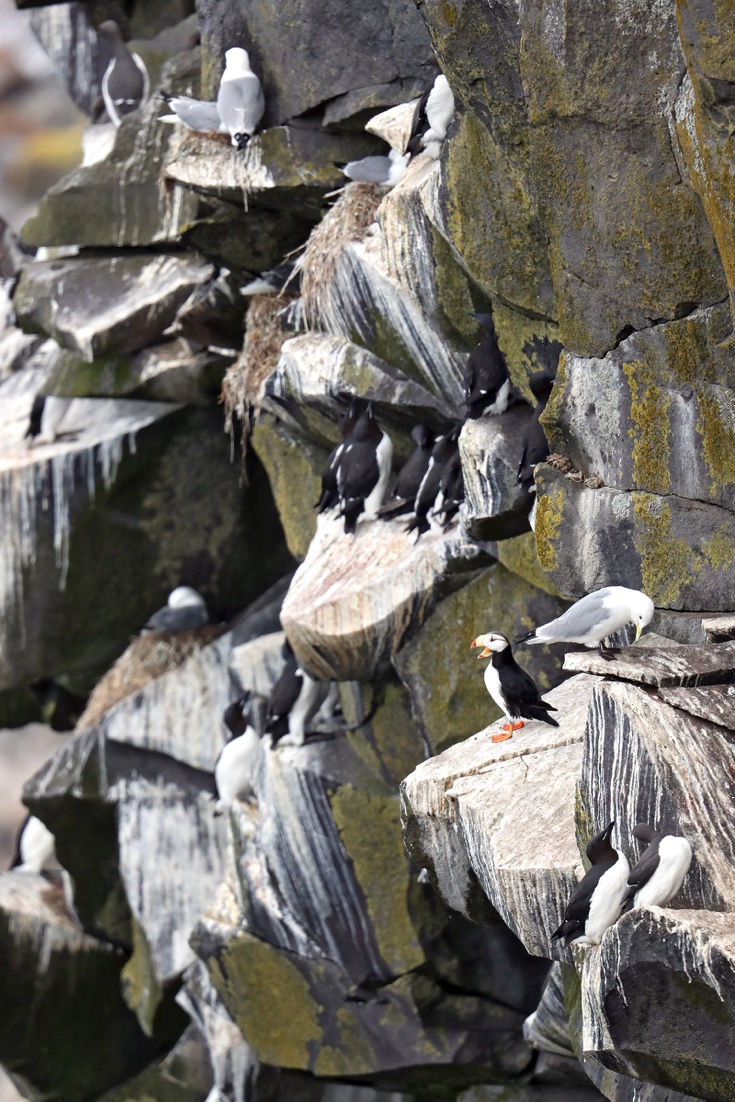 Below: I will start with the seals and cover the seabirds later. The beach below shows one of the many fur seal rookeries that rim the island. Compared to the historic photos that show seals blanketing the beaches, the seals were pretty sparse during our visit. The population decline may be partly to blame but I also think that we were early in the season and that the numbers would pick up later.

The rookeries are now carefully protected, and tourists are not allowed to get close to the seals. There are, however, a couple of observation blinds that tourists can get permission to use. There is also one spot where the road goes quite close to a beach rookery and it possible to watch and photograph the seals from a car (the closeups below were taken from the car). 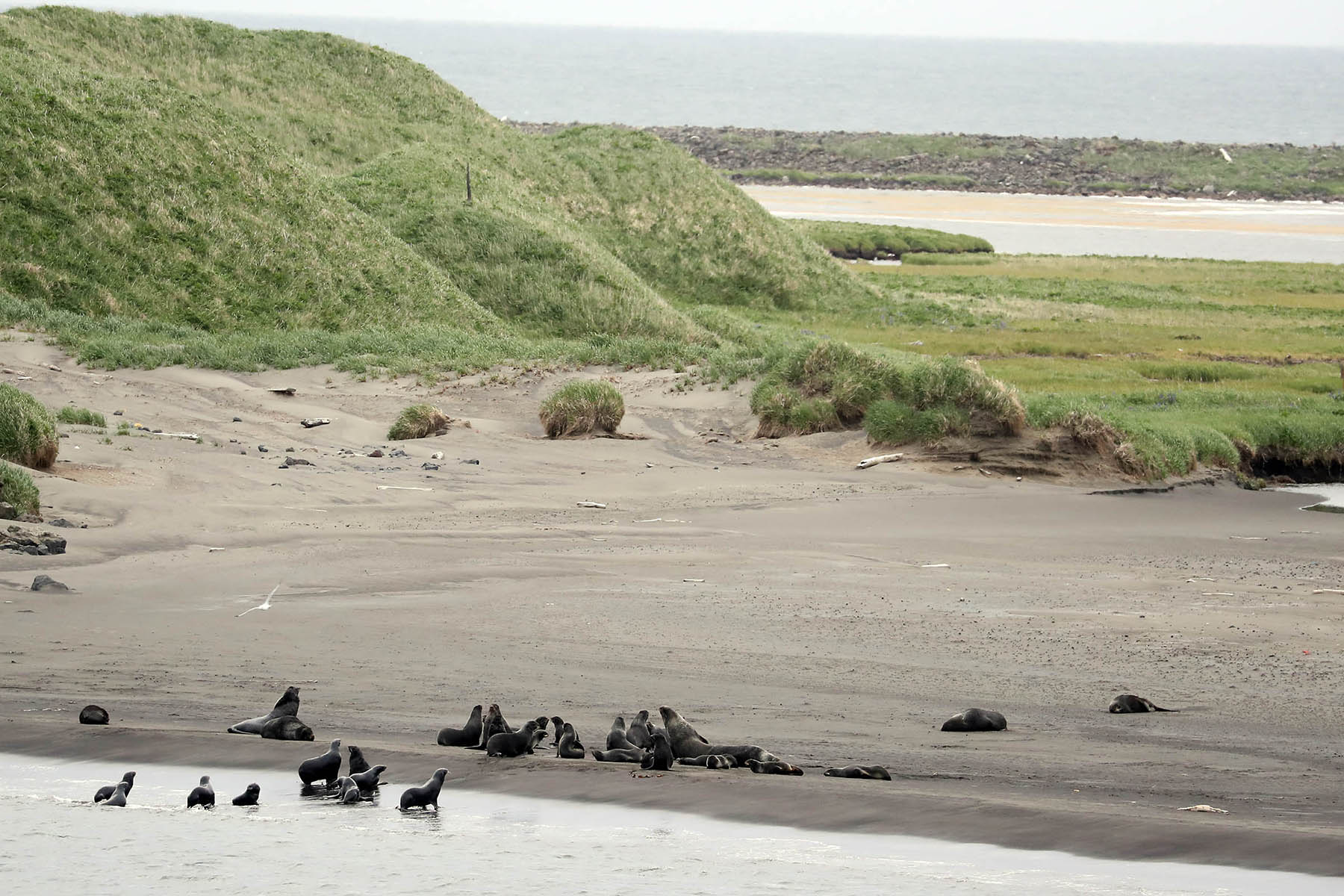 Below is the Pribilof Fur Seal Monument to commemorate the 100th anniversary of the signing of the North Pacific Fur Seal Treaty of 1911. This treaty was an international treaty designed to manage the harvest of the fur seals (and perhaps other mammals as well?). The monument shows an Aleut man observing several seals. I found the following information online about the seal harvest: “It has been estimated that by the early 1900s the tax and lease revenue from the sale of fur seal skins paid for the $7.2 million-dollar purchase of Alaska. The first 20 years, US harvesters took approximately 2,255,500 seals.”  Seals alone made the purchase of Alaska worth it—everything else is gravy! 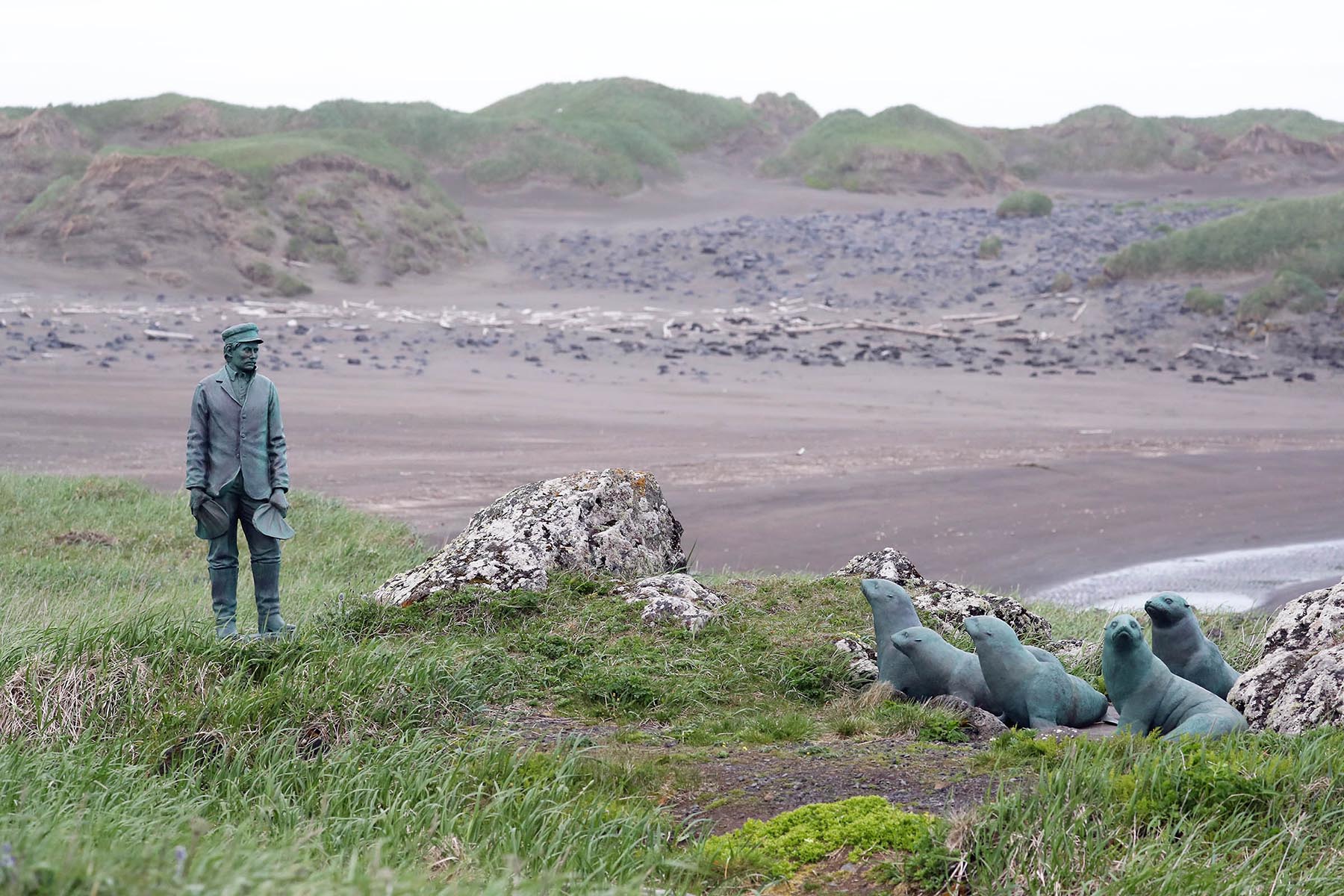 Below: Seals and their kin come in two flavors: eared seals vs true seals. Fur seals are eared seals—family Otariidae—and you can clearly see the ears on this guy below. You can also see the fur that drove the seal gold rush. Fur seals (and presumably other eared seals) also differ from true seals in being able to walk with their flippers. True seals family Phocidae), like the elephant seals I am used to near Santa Cruz, move by undulating like giant slugs. 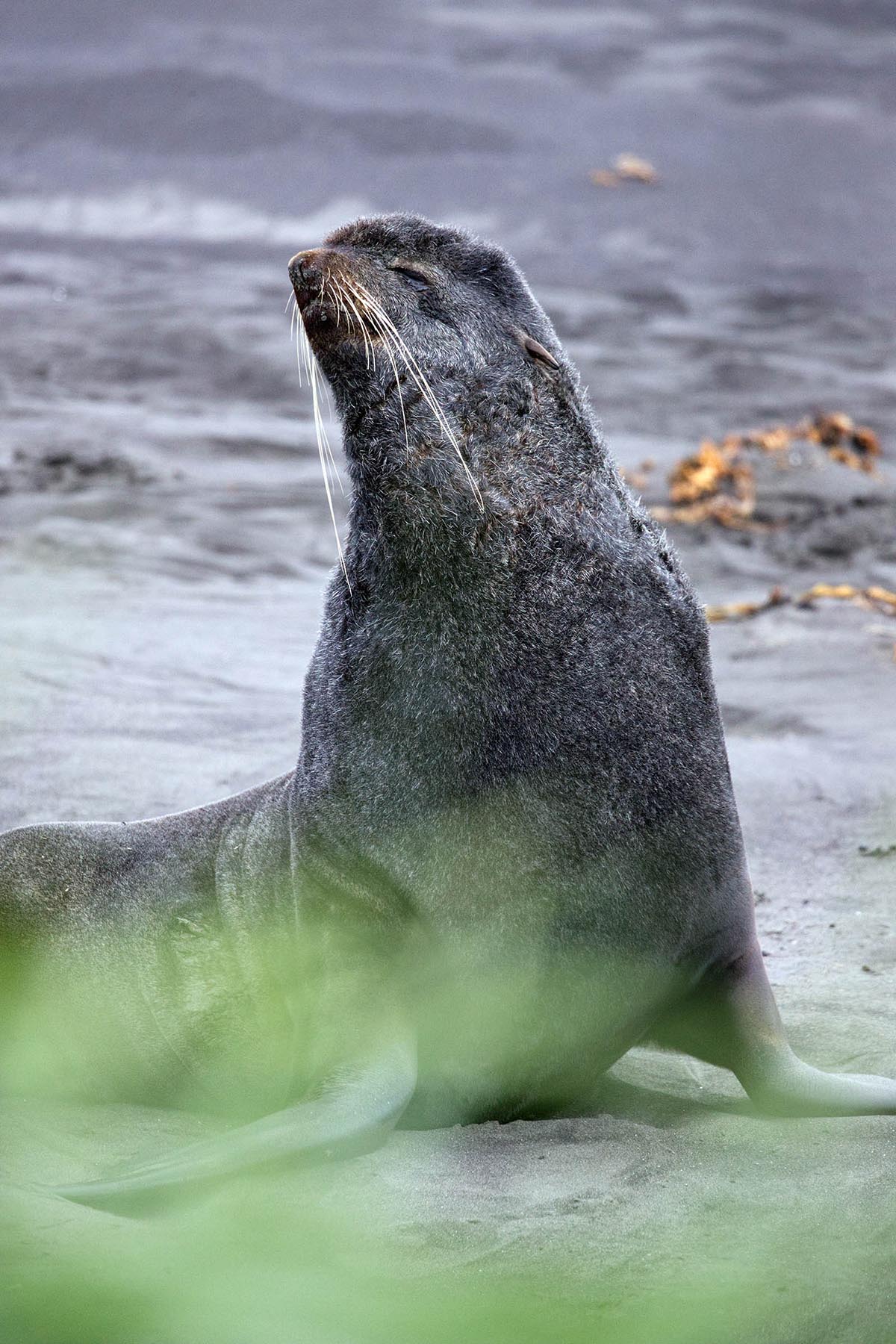 Below: A male emerges from the surf and demonstrates how eared seals can walk on their flippers. The small ones can move pretty fast—almost a gallop—and their movement reminded me of footage I have seen of vampire bats running on the ground on their folded wings. Perhaps this similar movement pattern is because they both walk and run with limbs that have been highly modified for uses other than walking on land. 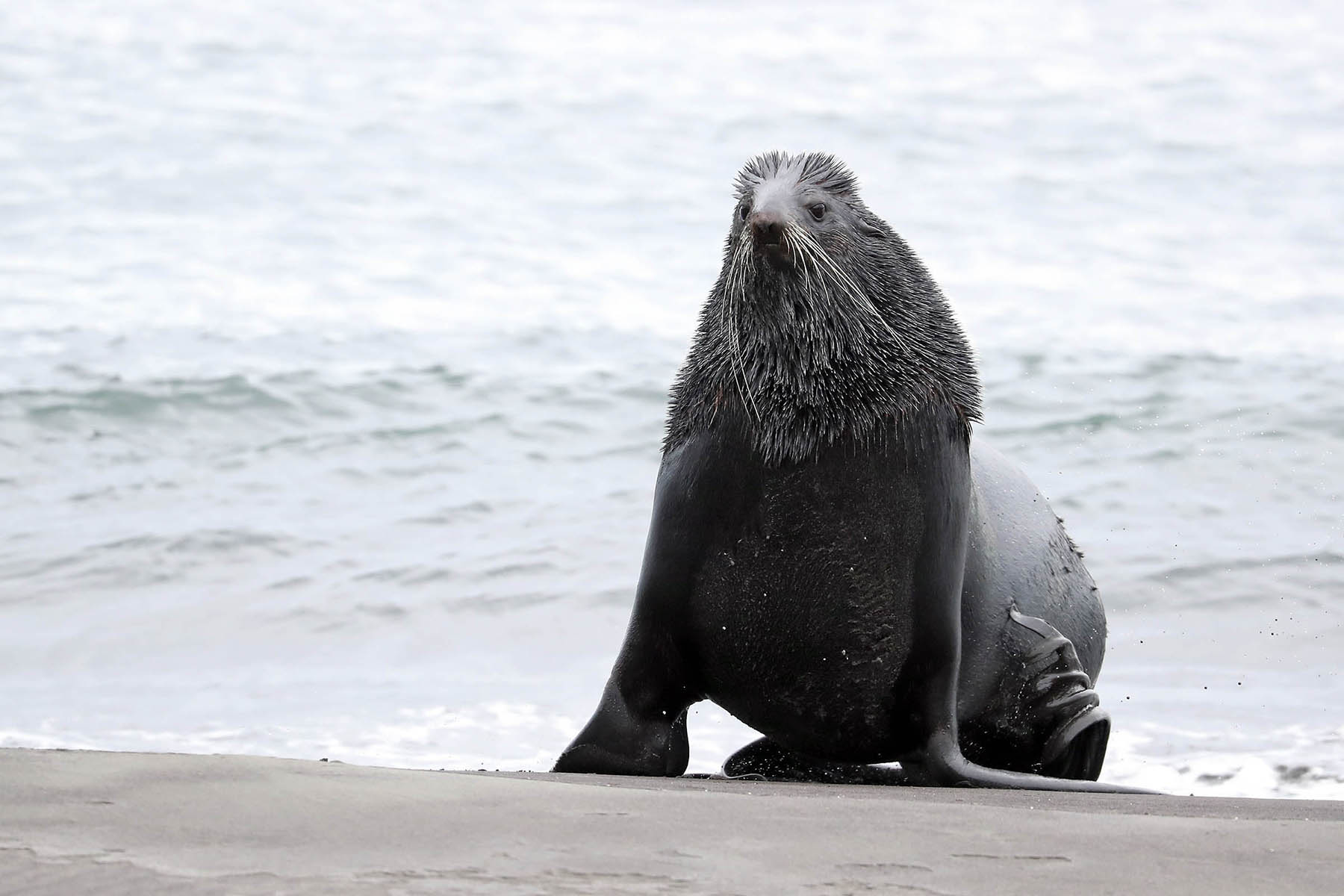 Below: Four young seals frolic and fight in the surf. These seals fight and bicker a lot! A colleague who studies marine mammals, and who has been to St Paul to help tag seal pups, told me to expect differences between these guys and elephant seals, and the differences were notable. Although elephant seals are famous for the epic battles between the huge alpha males, fights are in fact not that common since the males need to conserve their energy for the long breeding seasons. 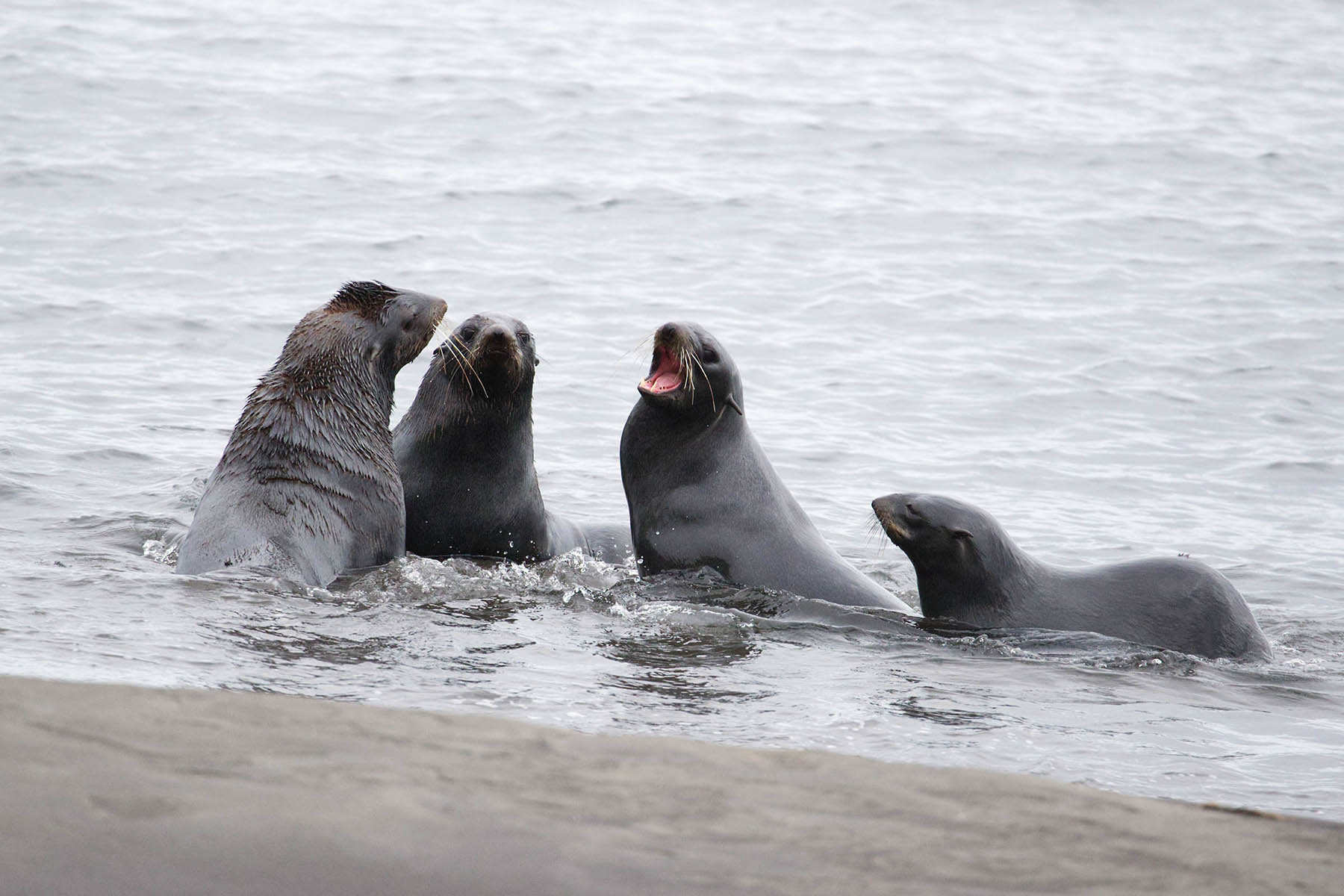 Below: Two large bull fur seals in the intertidal. The intertidal at St Paul was particularly lovely, with lots of colorful algae festooning the square volcanic boulders. 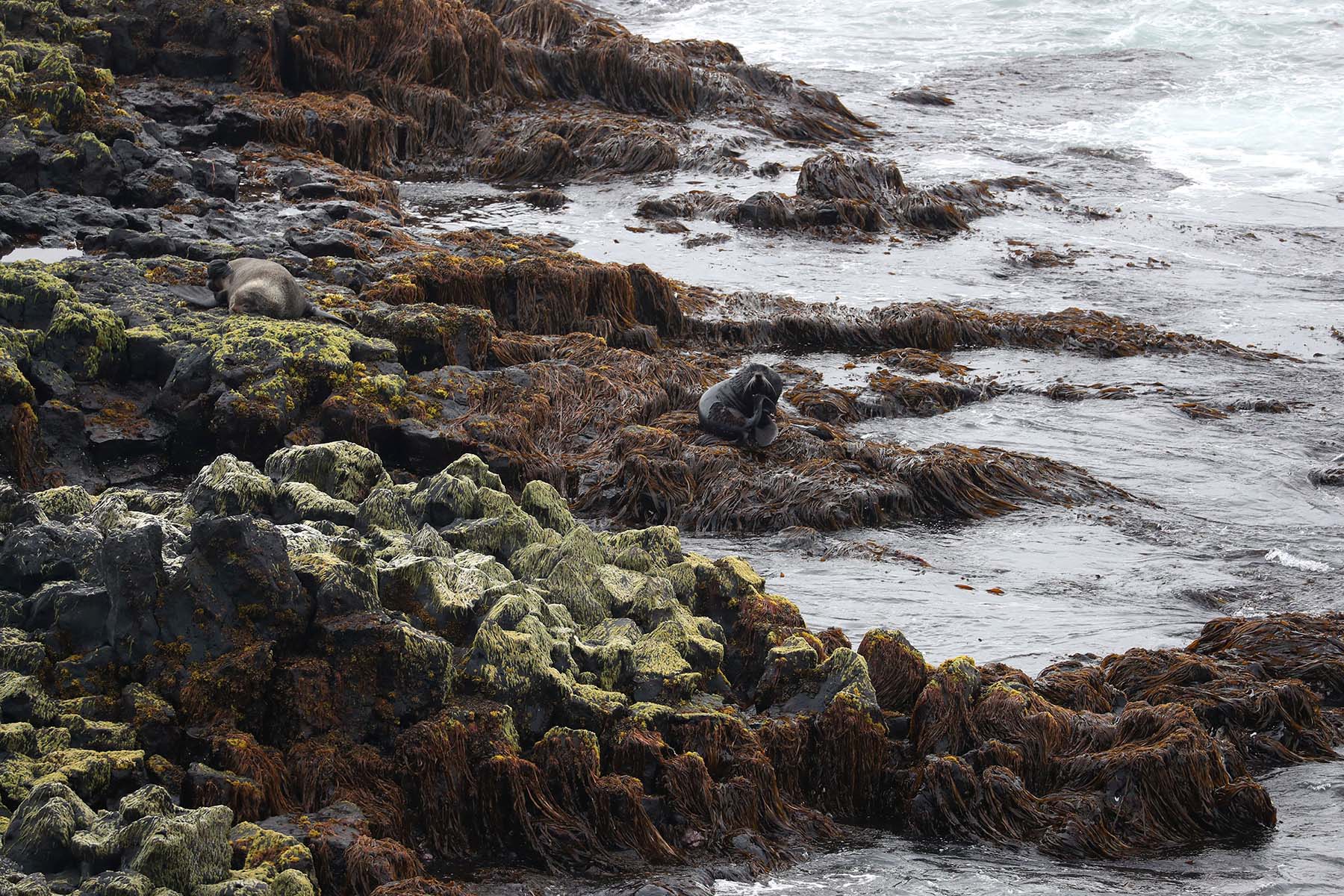