Reader Neil called my attention to a new paper in Science that tests honesty around the globe in a time-honored way: do people return lost wallets? You can access the paper by clicking on the screenshot below  (pdf here, reference at bottom):

Rather than describe the results myself, I’ll just take a snippet from a Science News and Views article by Shaul Shalvi about the paper, which involved 17,303 wallets turned in to authorities in 355 cities across 40 countries. Shalvi’s words are indented, mine are flush left:

To disentangle the influence of self-interest, self-image, and altruism in a field experiment, Cohn et al. handed wallets to front-desk employees at major institutions, including banks, theaters, and other public offices, claiming to have found them on the street. Each wallet contained a grocery list, a key, and three identical business cards, providing people with a way to show civic honesty by returning the wallet to its owner. To vary temptation, different amounts of money were also included in some of the wallets. Cohn et al. conducted many control tests and analyses to rule out the possibility that people would return the wallet out of fear of being identified or punished.

The wallets were transparent business card cases, allowing the official receiving the wallet to see what was inside.  A “returned” wallet was one in which the owner was contacted within 100 days (each wallet had an email address in it).

Whereas selfishness predicts that people will be less likely to return wallets containing money, altruism and the desire to maintain a positive self-image predict the opposite pattern. In 38 of the 40 countries studied, wallets with money were returned more often than wallets without money, which supports the idea that people are not purely selfish. Moreover, wallets with more money (US$94.15) were more likely to be returned than wallets with less money (US$13.45). The effect not only contradicts rational economic thinking, it is rather surprising. Both laypeople and expert economists predicted the exact opposite pattern of results in surveys reported by the authors.

Furthermore, a key is valuable to the wallet’s owner, not the wallet’s finder. In the United States, the United Kingdom, and Poland, the authors added an experimental treatment in which wallets included money but no key. Doing so allowed them to assess the specific contribution of altruism to honesty. Indeed, adding a key increased the likelihood of the wallet being returned. Taken together, these results support the idea that people care about others as well as caring about being honest.

Here, from the paper is the rate at which wallets were returned in the 40 countries, with moneyless wallets shown by gold dots and money-containing wallets with red ones. As you see, in every country save Mexico, wallets were returned more often when they contained money. Switzerland leads the pack for honesty, while the US didn’t do so well, falling in the middle of the pack. China was worst in returning moneyless wallets, while Perus was worst in returning wallets with money.

People tended to overestimate the rate at which wallets were returned and, surprisingly, guessed that the more money a wallet contained, the less likely it was to be returned. In fact, the empirical results were the opposite. Economists didn’t do much better, guessing that all wallets would be returned at a high rate of around 65-70%, with no difference predicted between wallets containing no money or some money, and a slightly lower rate of return with Big Money wallets. In other words, both experts and citizens generally overestimated the honesty of their fellows, and also erred in thinking that wallets with money would be returned less often.

One interesting analysis was conducted by reader Neil, who said this:

What jumped out at me was the ranking of the countries by how often the residents reported finding a wallet with money. I made a spreadsheet that compares the wallet w/money reporting rate and the rate at which people report that religion is an important part of their lives (from Wikipedia). There is an obvious trend in the data that suggests that religion may not make people behave better. Well, we both already knew that. The strange thing is that the authors of the paper didn’t notice the correlation or didn’t think it was worth mentioning.

Here are the data Neil transcribed, including the index of religiosity (no data were available for China, but it would be low, which would reduce the correlation a bit. “Walled” in column 1 is “wallet”: 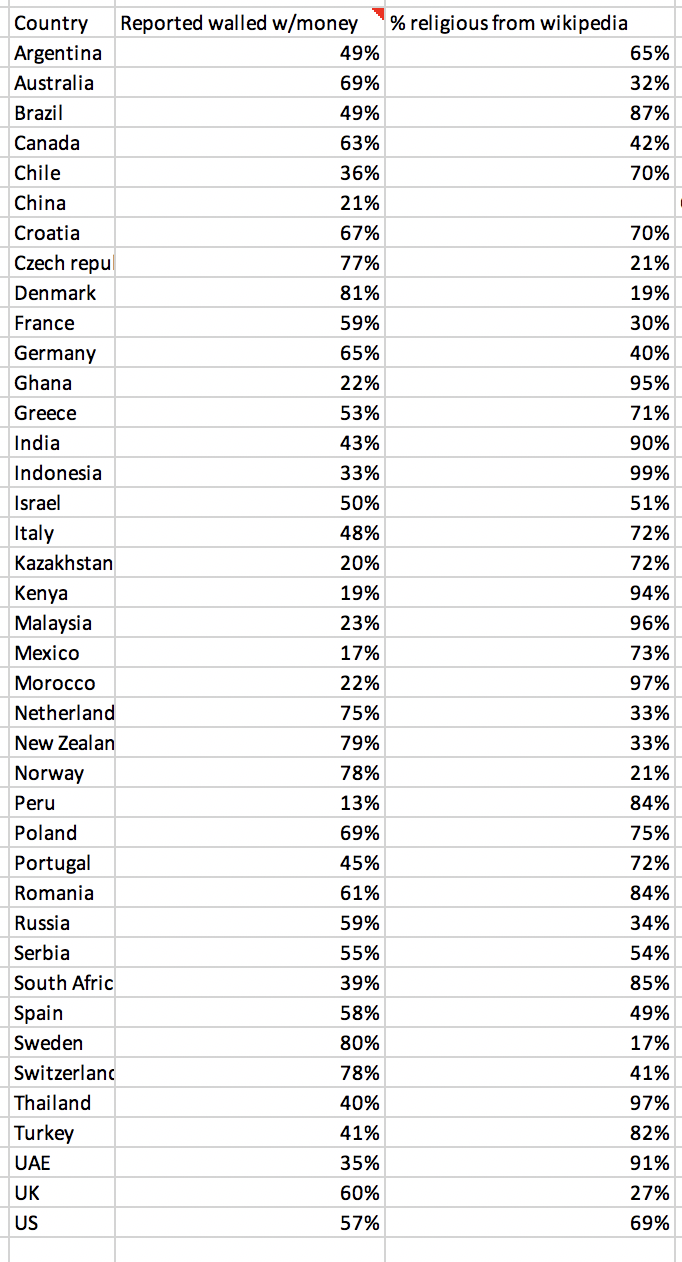 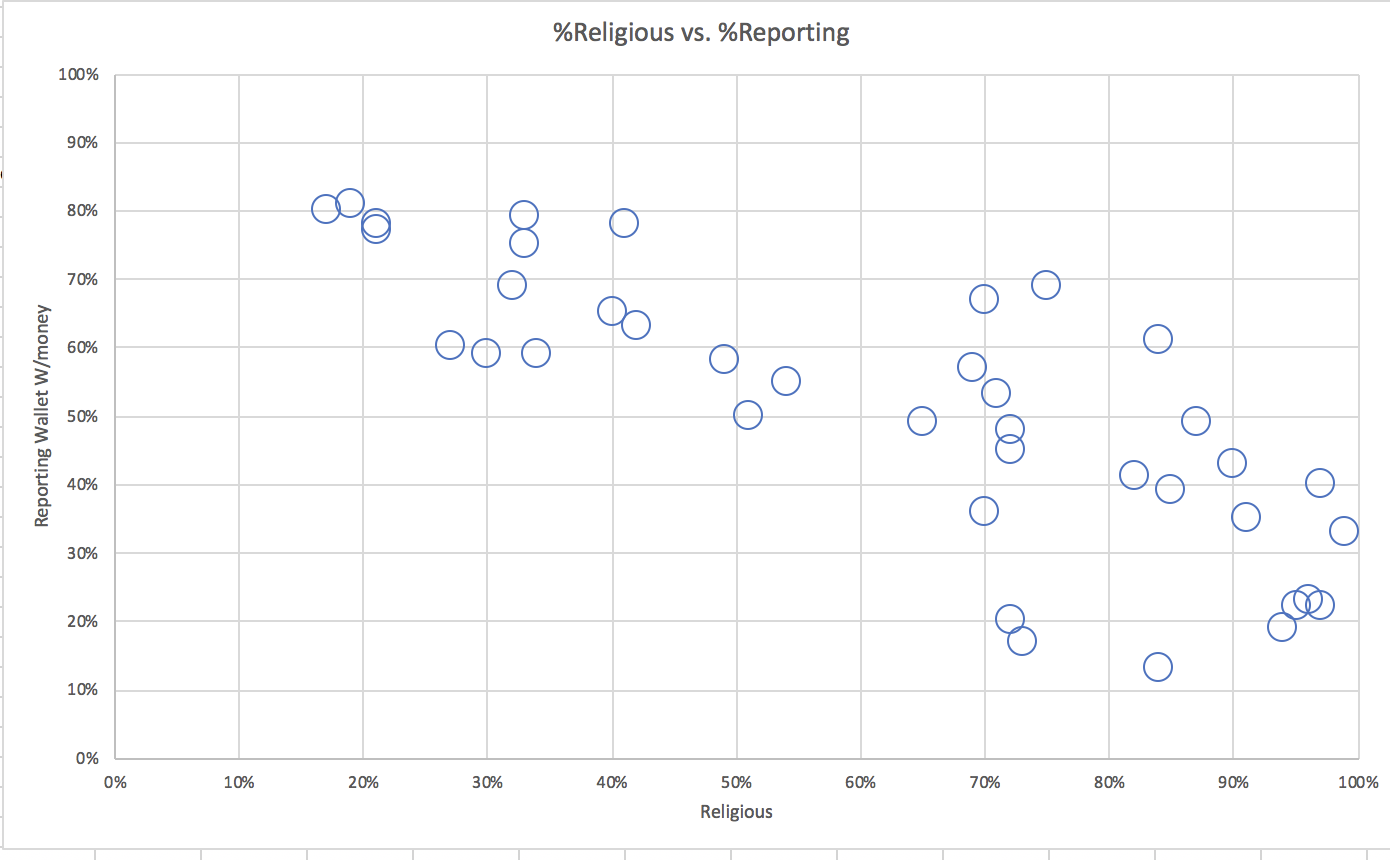 I report this in passing as it’s not at all certain that religiosity has anything to do with returned wallets, for there could be other variables responsible for keeping or returning wallets that correlate with both religiosity and tendency to return wallets. The most obvious is income: poorer countries tended to be those in which wallets were returned less often, which is  expected. We also know from other posts I’ve made that there is a negative relationship between religiosity and indices of well being, including income, so that poorer countries also tend to be those in which people are more religious. (One theory for this is that people become religious as means of seeking help or solace when they can’t get it from their government or society–see Marx.)So while this correlation may not have anything to do with the effects of religion on honesty, it does show, as Neil noted, that religiosity itself cannot be used as an index of honesty. It would be interesting in this study to add “income” to the variables and then see if religiosity has an effect on reporting independent of income.

Note that the authors are heartened by the high percentage of returned wallets, and the effect of money in increasing the return percentage. They conclude that their “findings. . .reveal a high level of civic honesty among nations.”

24 thoughts on “New study involving returning lost wallets: people in the world are more honest than you think, but a reader calculates that honesty is greater in less religious countries”