Two days ago we went to the Waikiki Aquarium, which had mixed reviews on the Internet for being small. But I found it fascinating. And yes, it’s not a Sea World with trained mammals (ecch!), but it specializes in tropical reef fish, and that it does very well. It also has a great series of jellyfish tanks.

Here are pictures of some of the inhabitants. Since it was dark, the shutter speed was slow and some of the snaps are out of focus. So be it.

The Aquarium specializes in raising corals (which it must for a realistic coral-reef display), and outside it has an exhibit about how it raises and grows these cnidarians (they’re related to jellyfish). Here are some of the lovely corals on exhibit. I know only a few of their names. 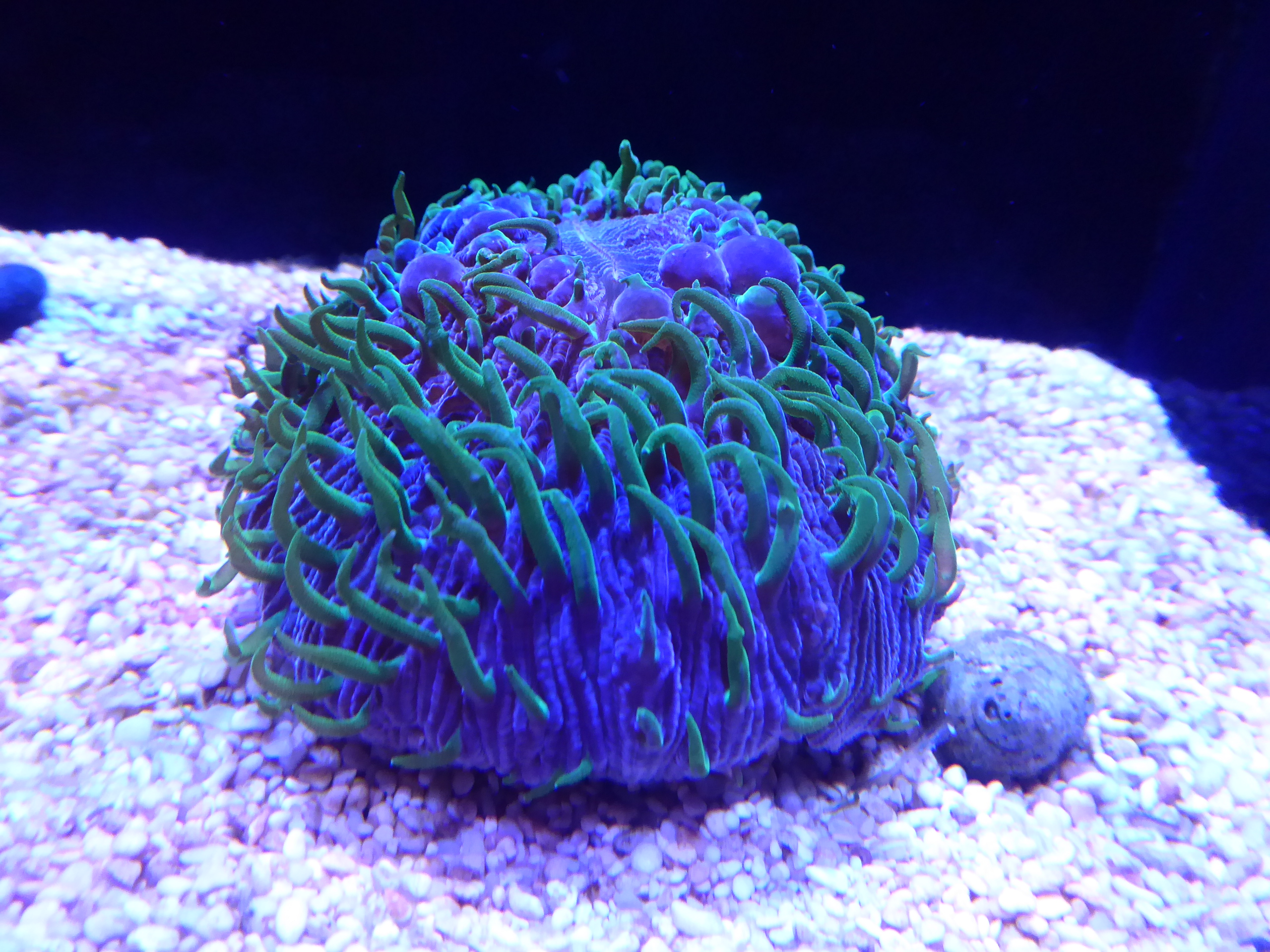 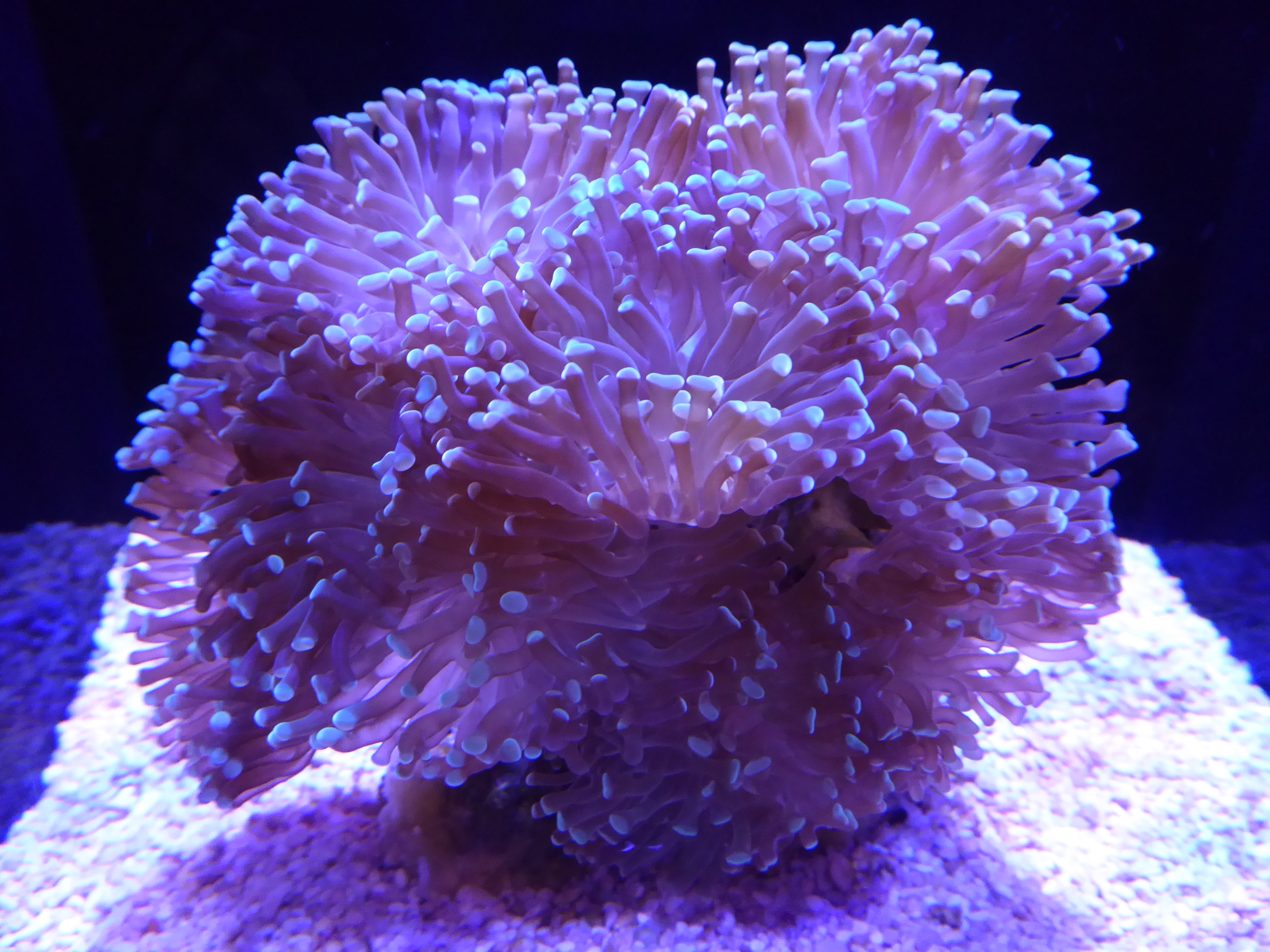 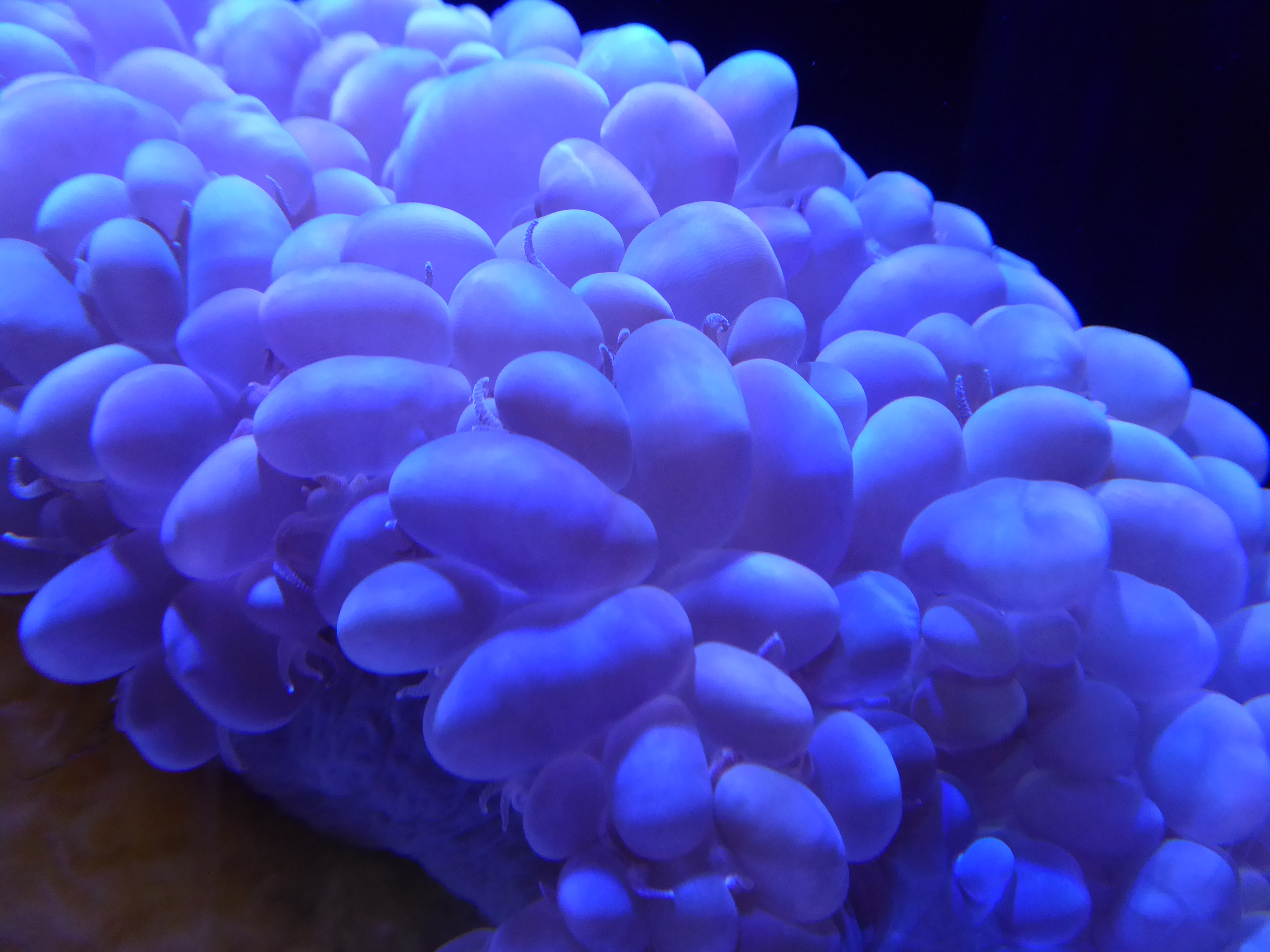 Unknown (to me) coral: 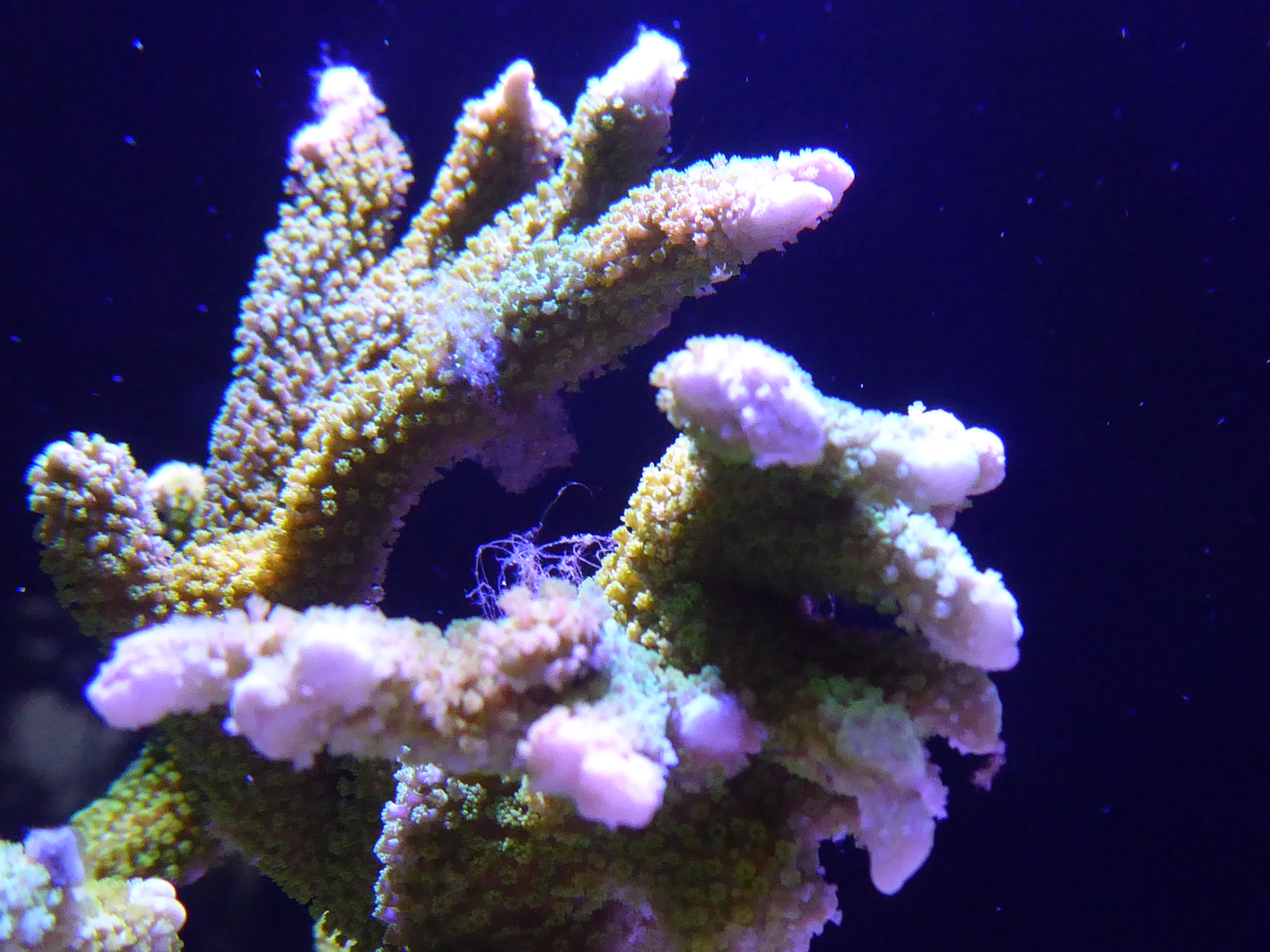 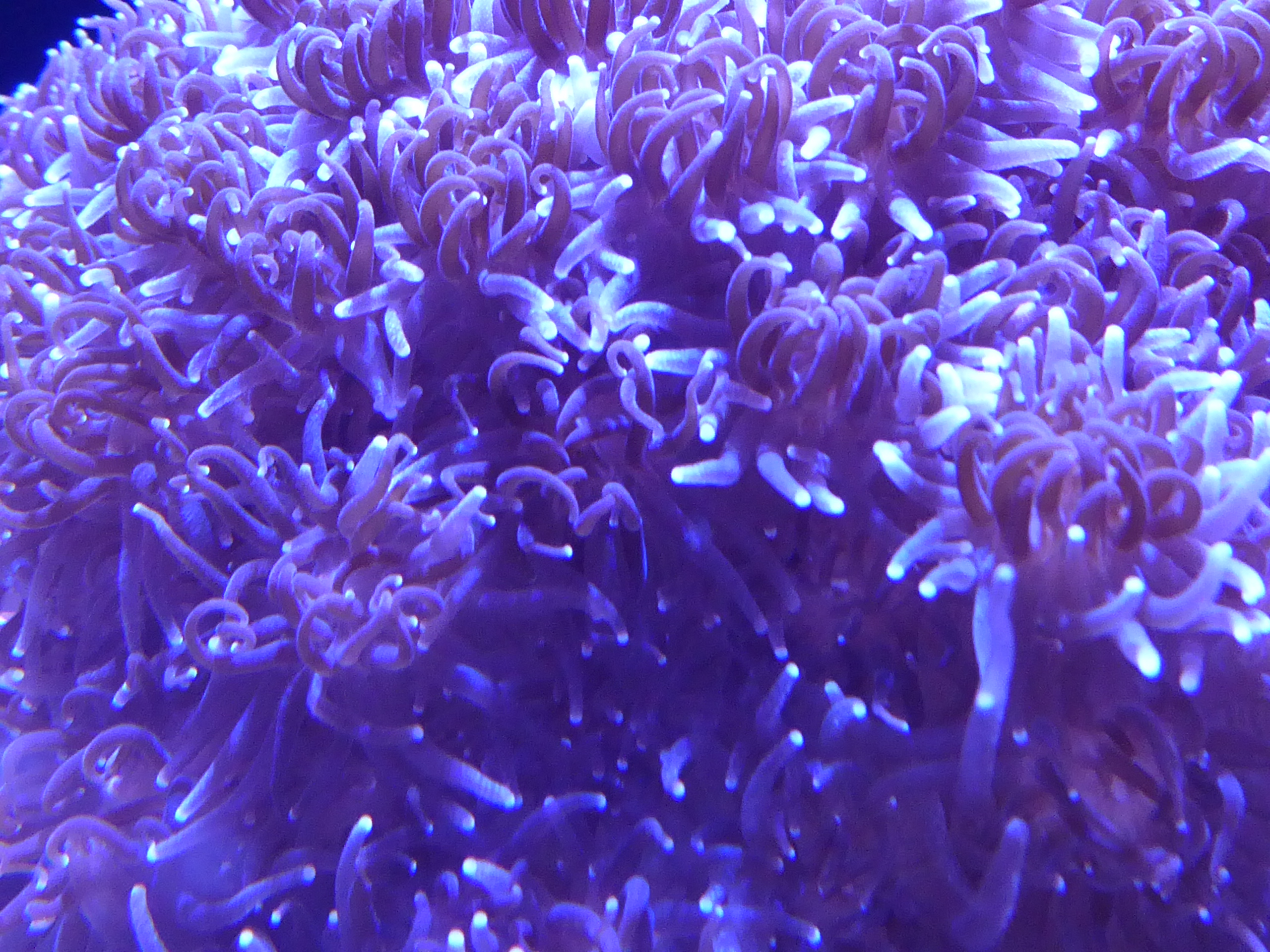 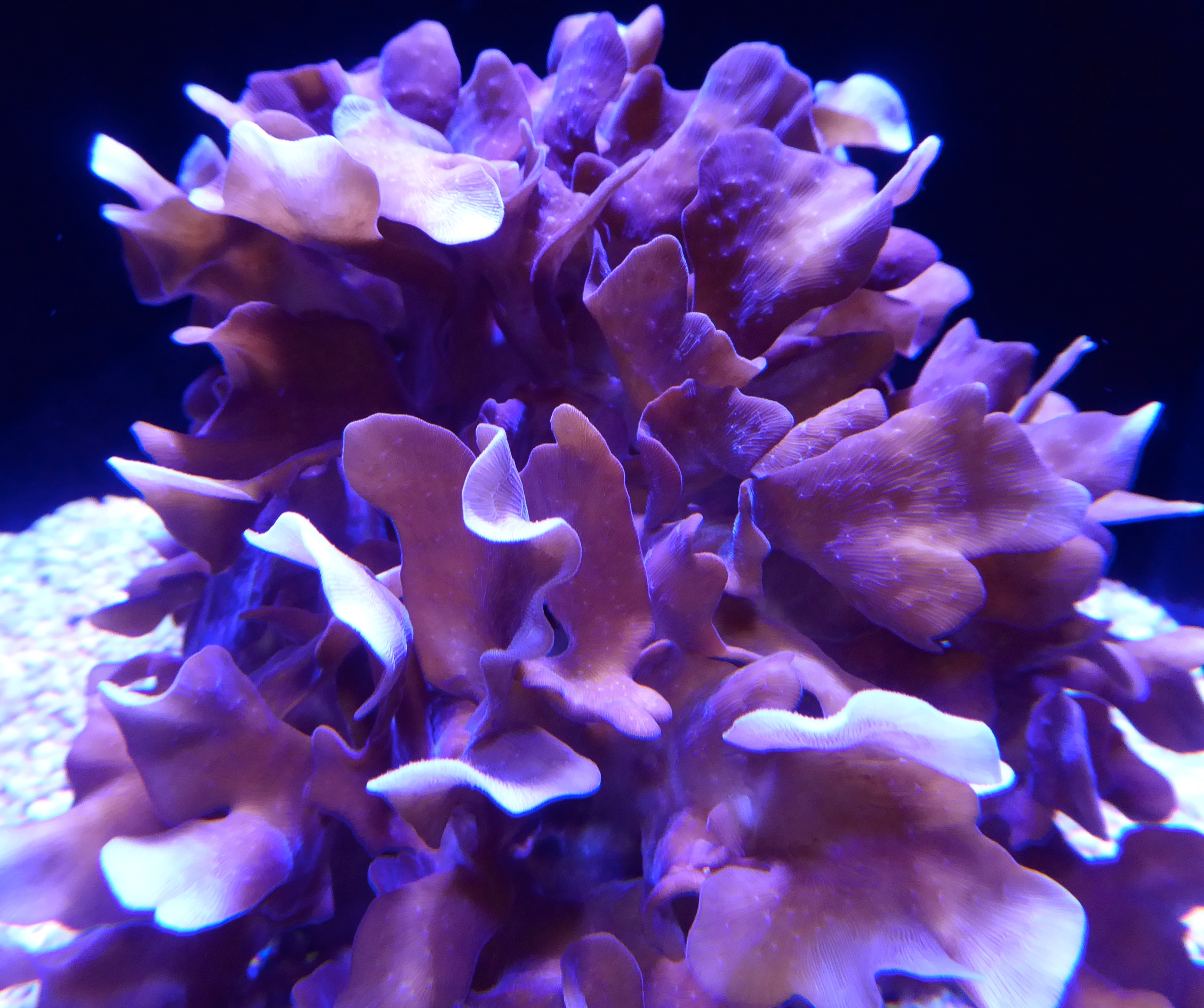 There was a lone Nautilus in a tank—the first I’d ever seen. I took a video. What a magnificent animal! It floated in one corner and waved its tentacles, so I didn’t see it swim. The family Nautilidae comprises six species, and I don’t know which one this is.

Here’s a great mimic, a Leaf scorpionfish (Taeniaotus triacanthus). Wikipedia reports on its mode of crypsis:

The leaf scorpionfish resembles a dead leaf lying in the water. To enhance this camouflage, it even makes gentle sideways movements in its pelvic area which make it resemble a drifting inert object. It is an ambush predator, waiting until suitable prey, a small fish or shrimp, approaches. Then it slowly moves with its pectoral fins close to the victim. When the leaf scorpionfish is close enough, the prey is sucked in by a sudden opening of its mouth. It eats small crustaceans, fishes, and larvae. 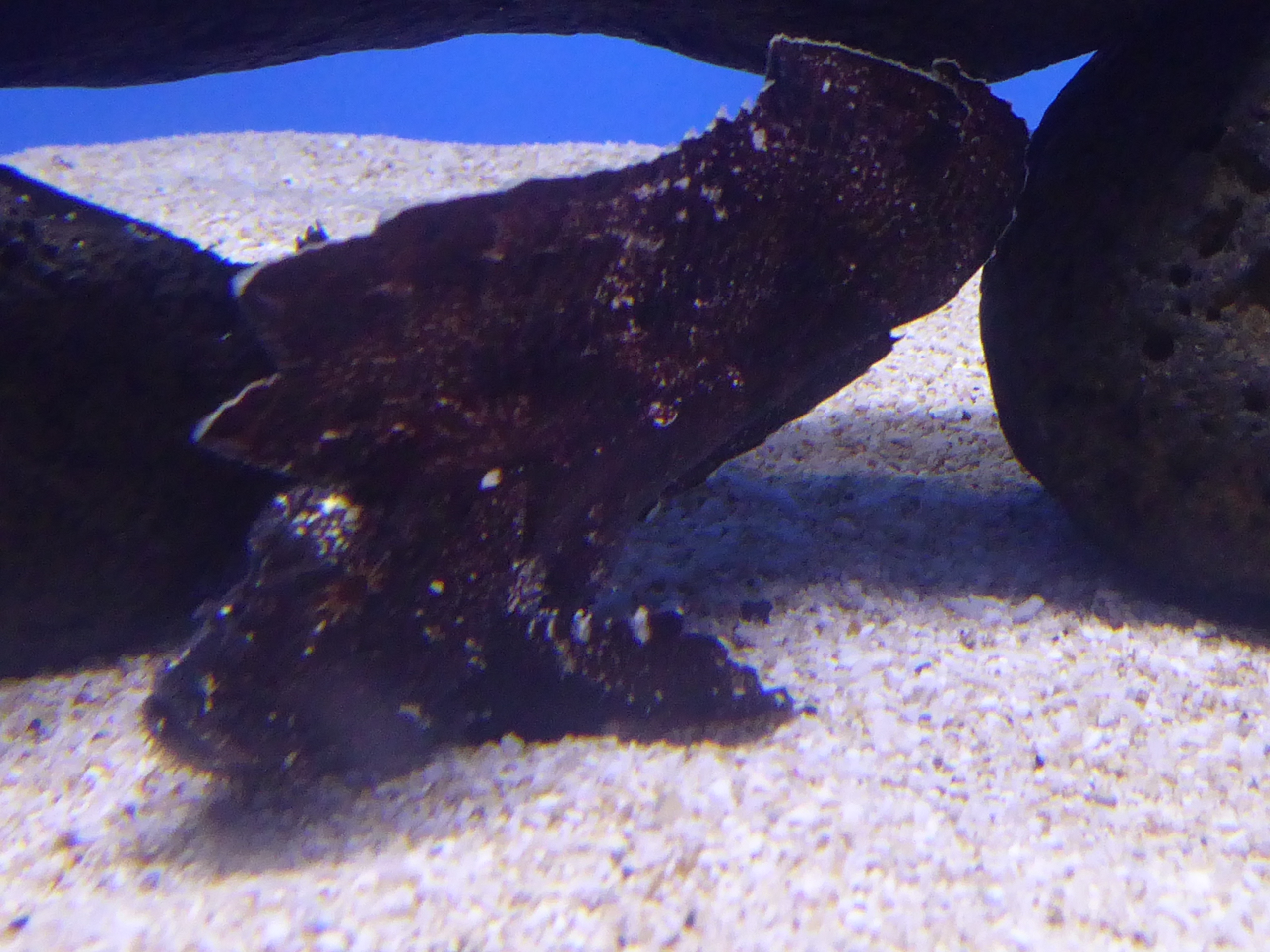 Here’s a video (not mine) showing its rocking, leaflike movements. You can get to the video by clicking on the blue box below:

I think this is a banded coral shrimp (Stenopus hispidus), which Wikipedia describes as a “shrimplike decapod crustacean”. Is it a shrimp? I don’t know, for a quick trawl of the Internet seems to show that “shrimp” is a grab-bag name that may not be monophyletic. 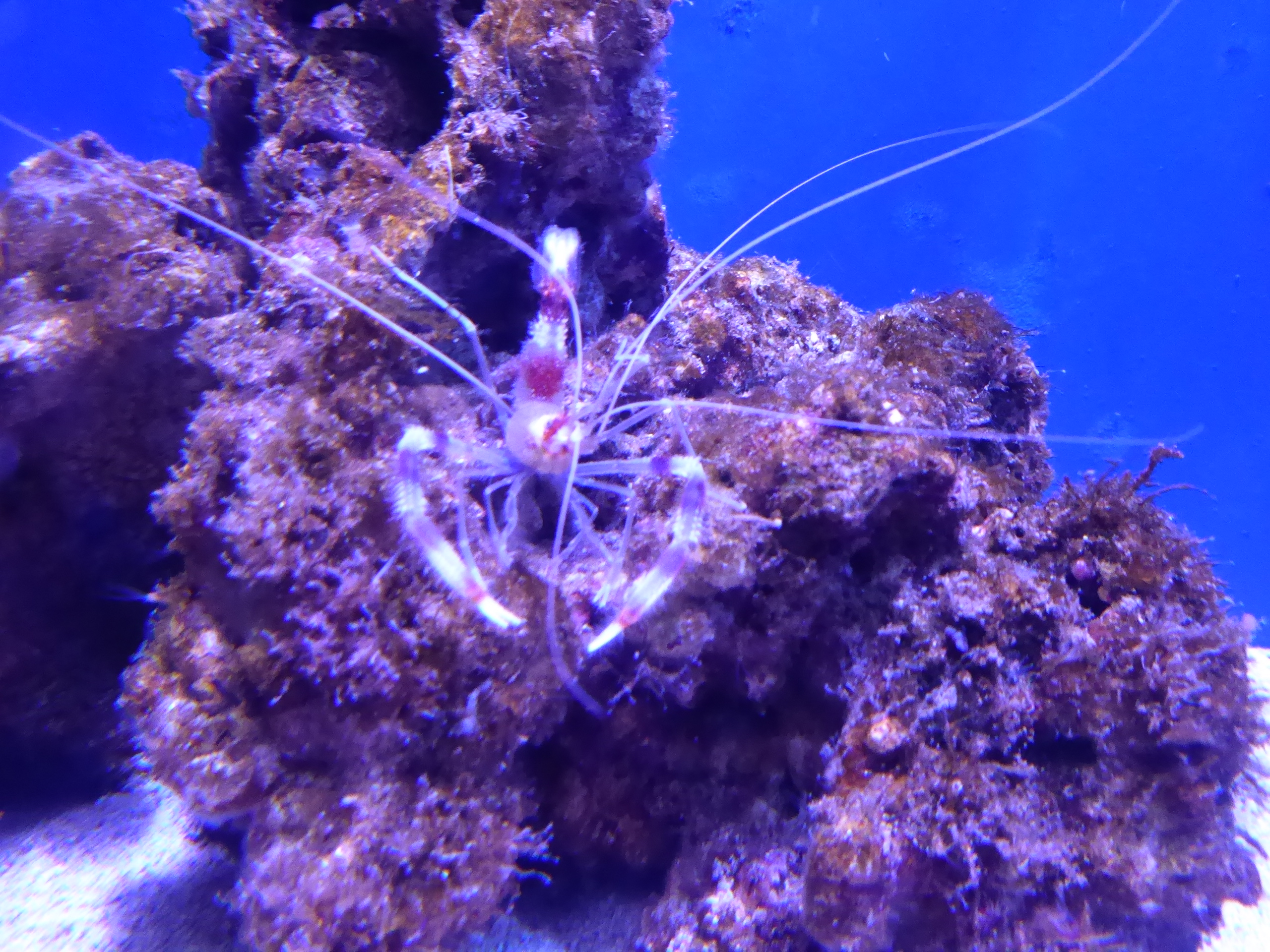 It’s hard to photograph the many tanks containing diverse fish and corals, for the fish are always moving and the shutter speed is about 1/30 of a second. Here’s what they look like, though, and what I hope to see when I snorkel on the Big Island next week. 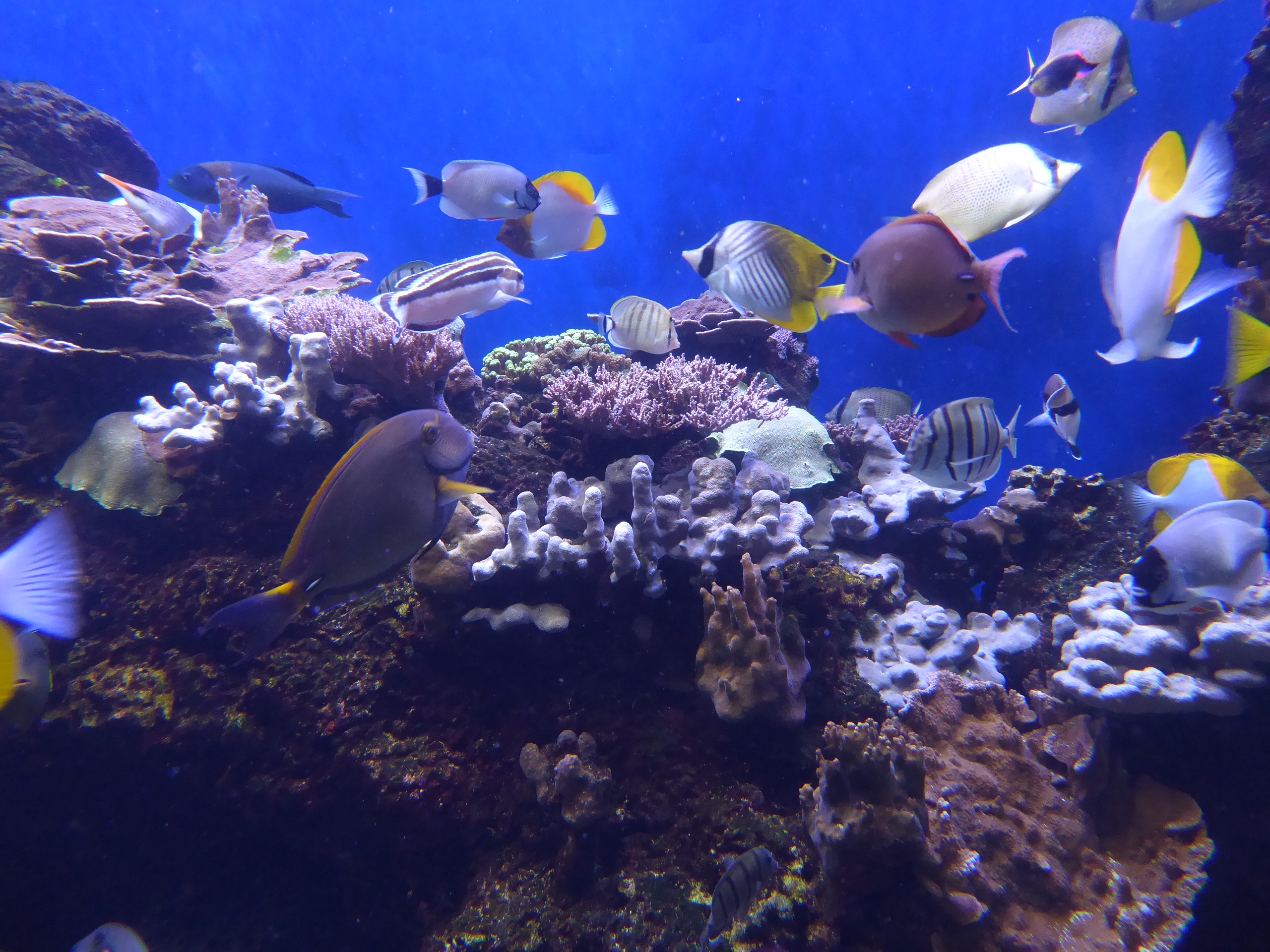 Is this Nemo? Nemo is a “false anemonefish”, but this is likely Amphiprion percula, the orange clownfish and a true anemonefish, which gains protection, as shown here, by hiding amidst the tentacles of stinging anemones. 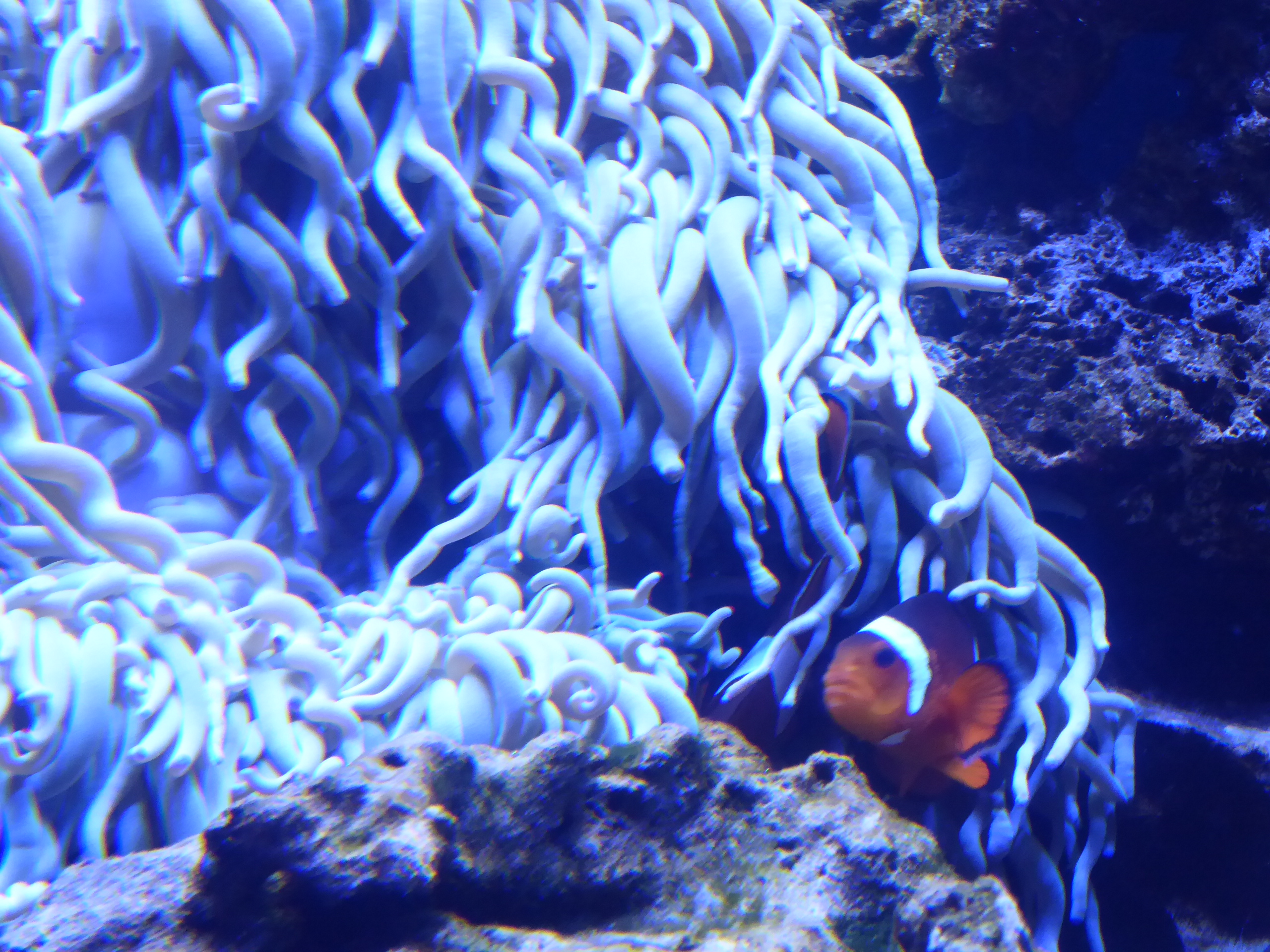 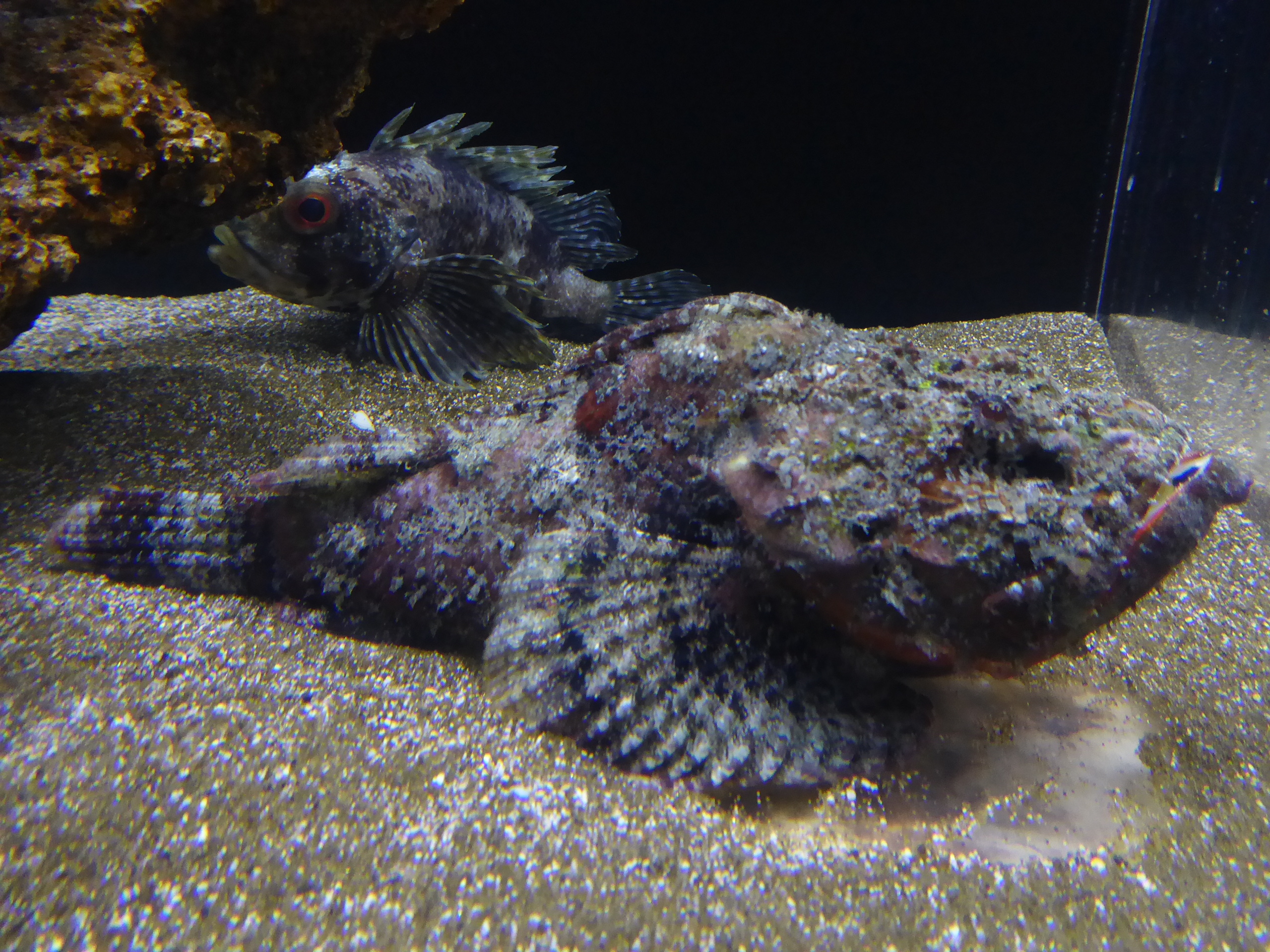 Look this thing! No wonder it’s called the devil scorpionfish! 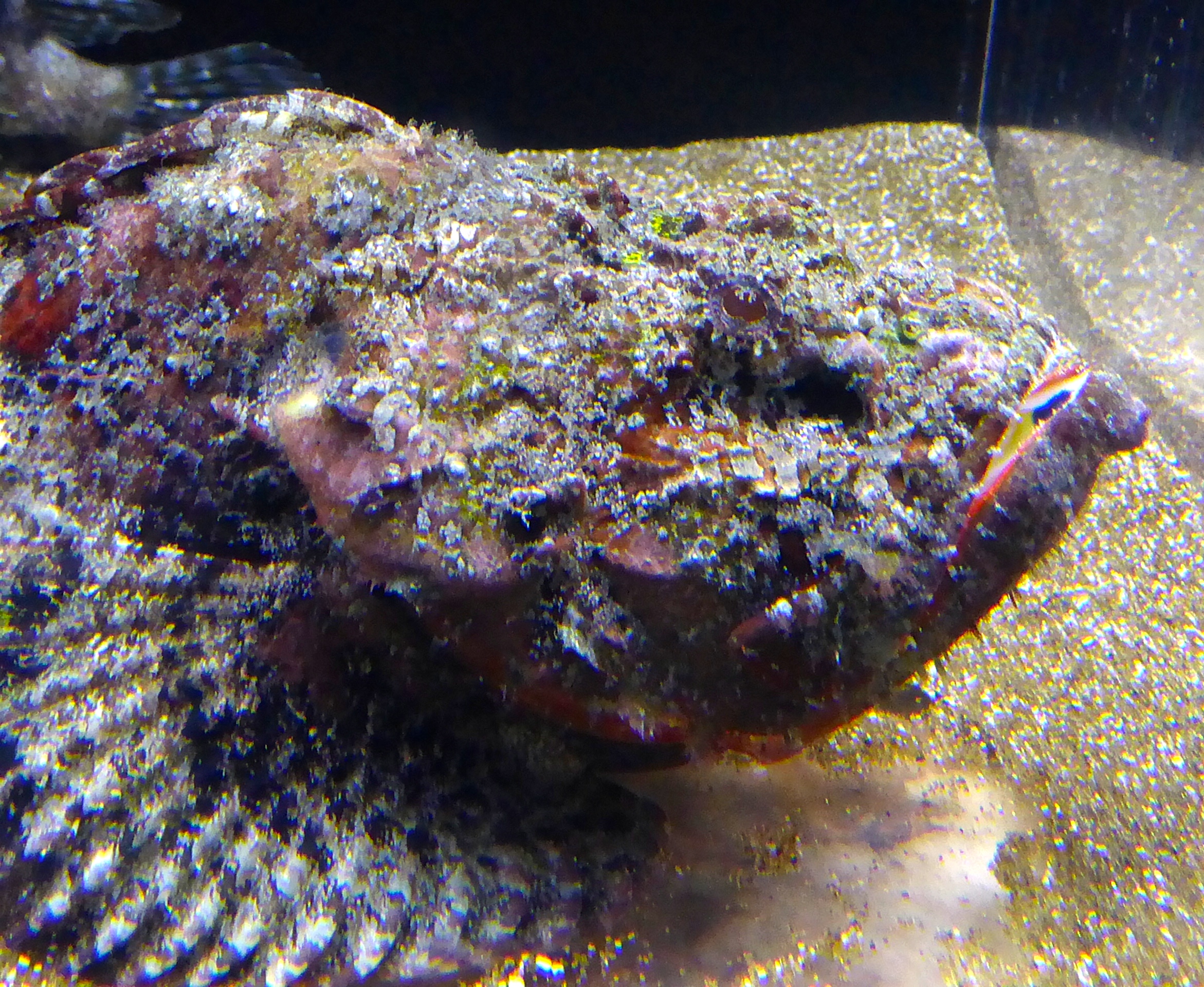 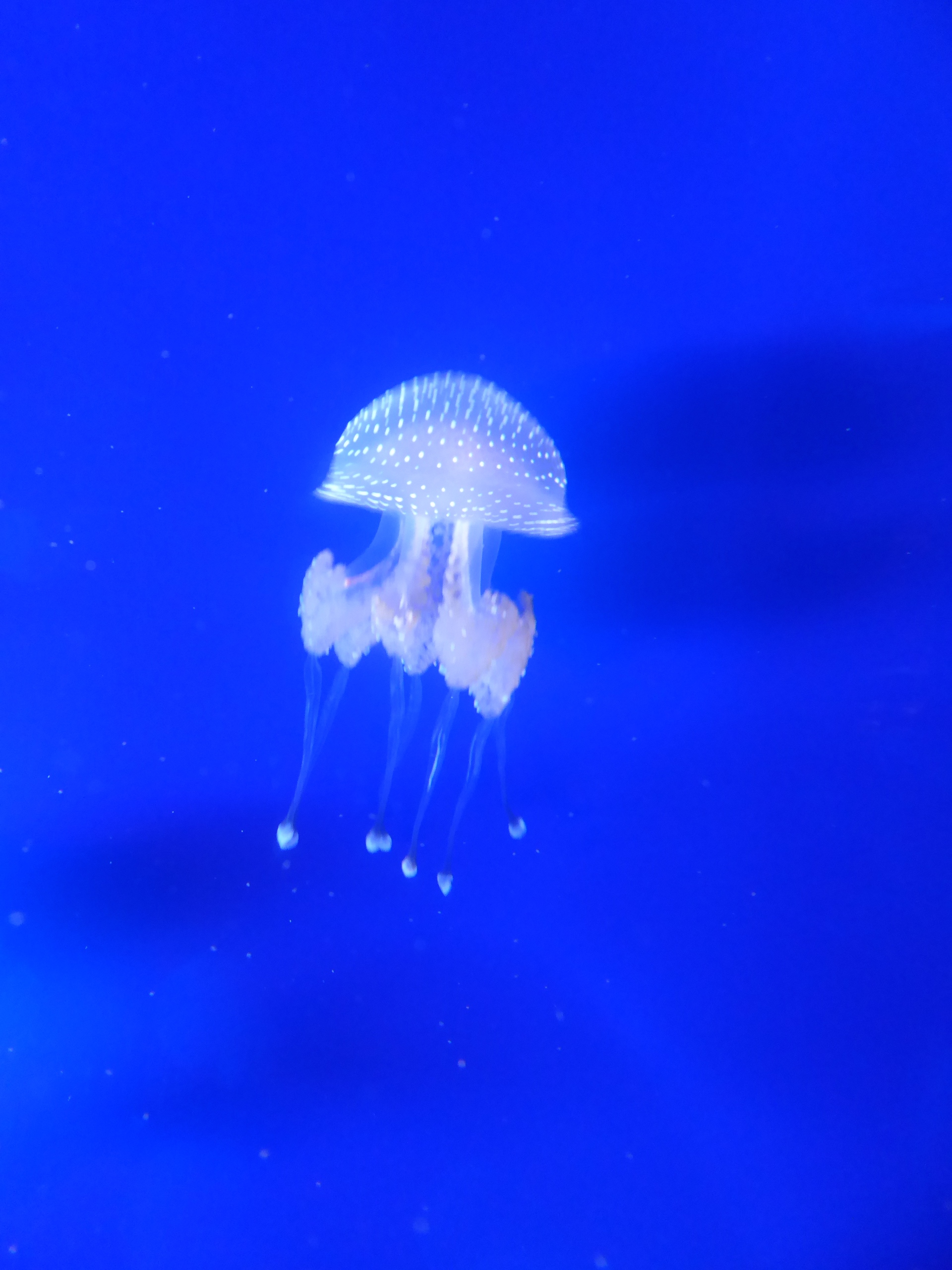 Two videos of the jellyfish tanks in the aquarium. I’ve mislabeled these videos as from the “Honolulu Aquarium,” but they’re really from the Waikiki Aquarium:

A little girl and her relative look at each other: 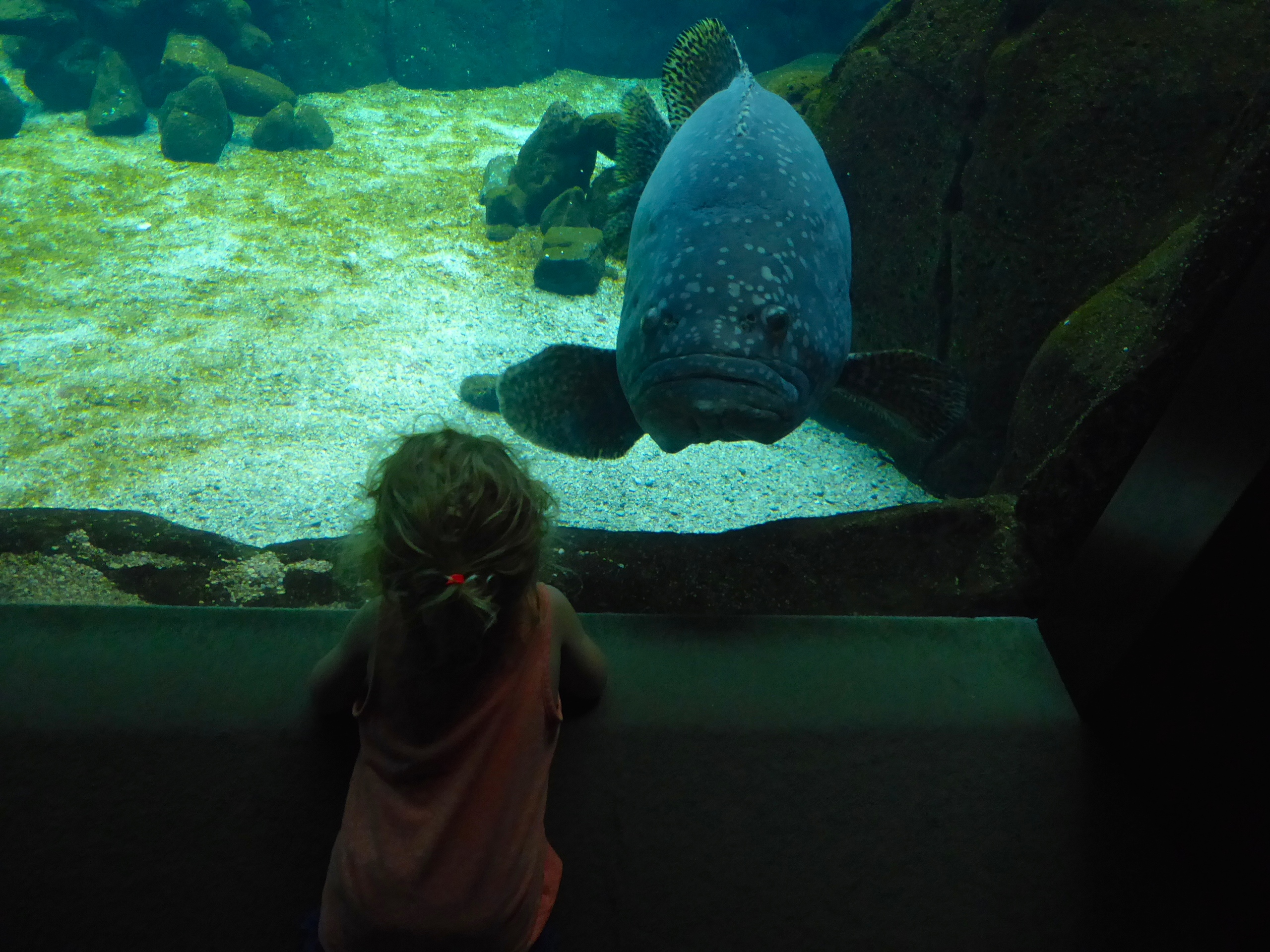 And a post-activity lunch (yesterday) at Gina’s Bar-B-Que near Waikiki: 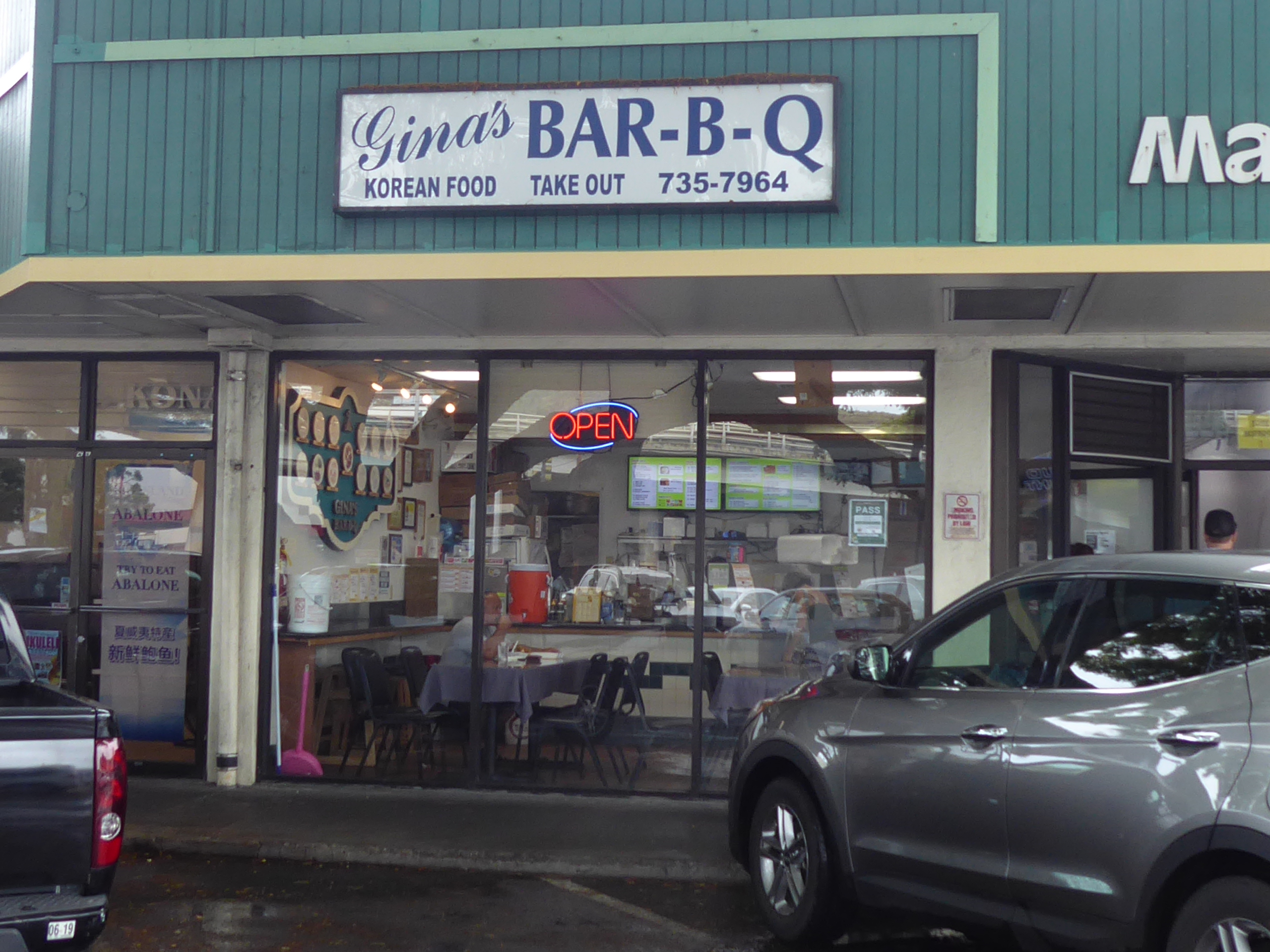 Gina’s is a kind of Korean plate-lunch place. For about $12 you get a Korean-style meat (like kalbi shortribs), three scoops of rice, and a choice of four Korean-style side dishes, including kimchi and picked daikon. Here are your selections: 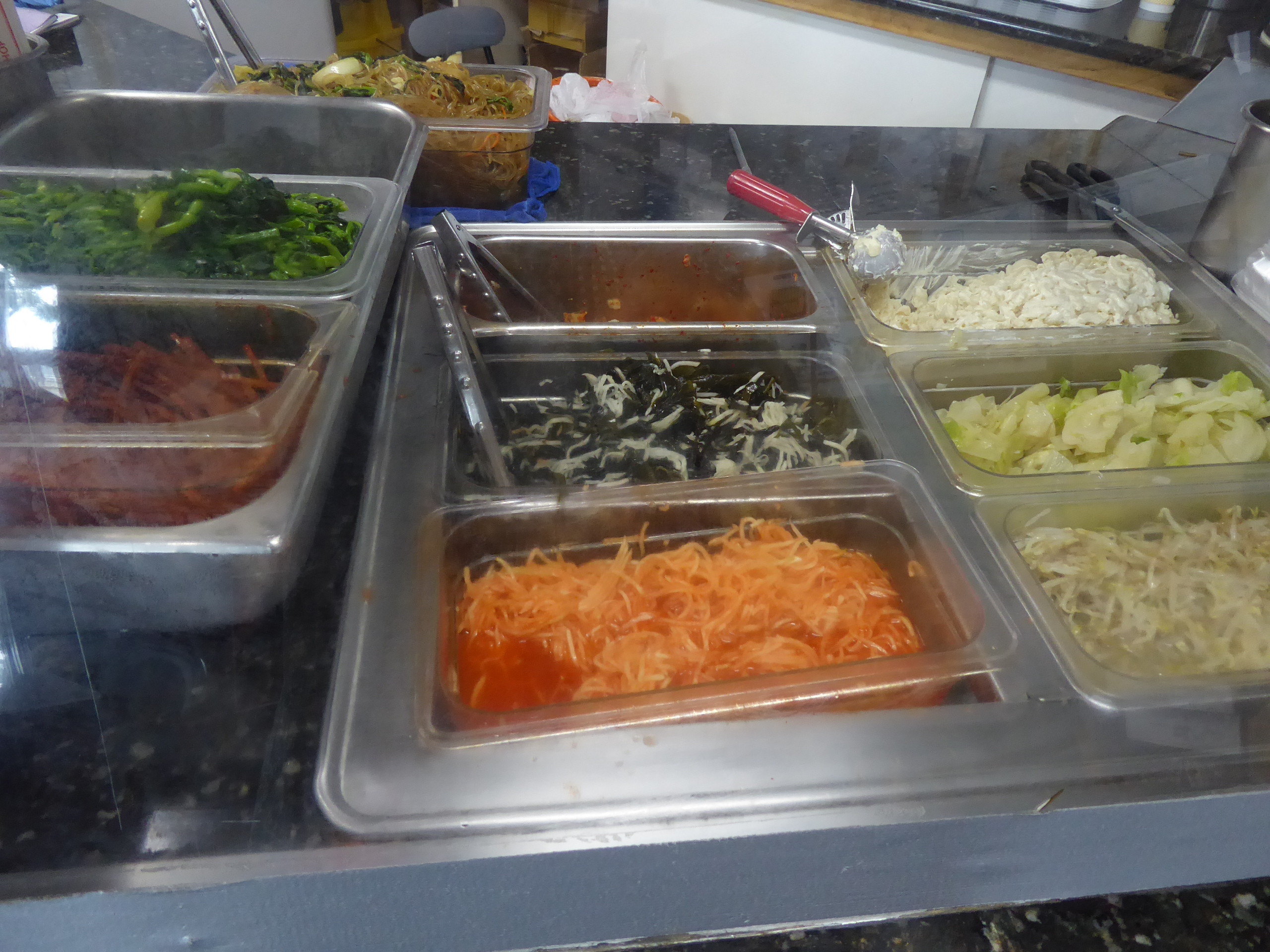 My plate: Gina’s #1 special, with kalbi, barbecued beef, barbecued chicken, three scoops of rice, and daikon, a green (watercress), noodles, and, to be Hawaiian, macaroni salad. This was terrific, as the many five-star reviews attest: the quality of the meat and its flavoring was superb, and the sides were great as well. They have a huge cooler of ice water to wash it down.

I vote this one of the three best plate lunches of Oahu, along with the Waiahole Poi Factory and the Highway Inn (Waipahu branch only). As with all the good places, Ginas is an unprepossessing place that you’d overlook if you just judged by the storefront. 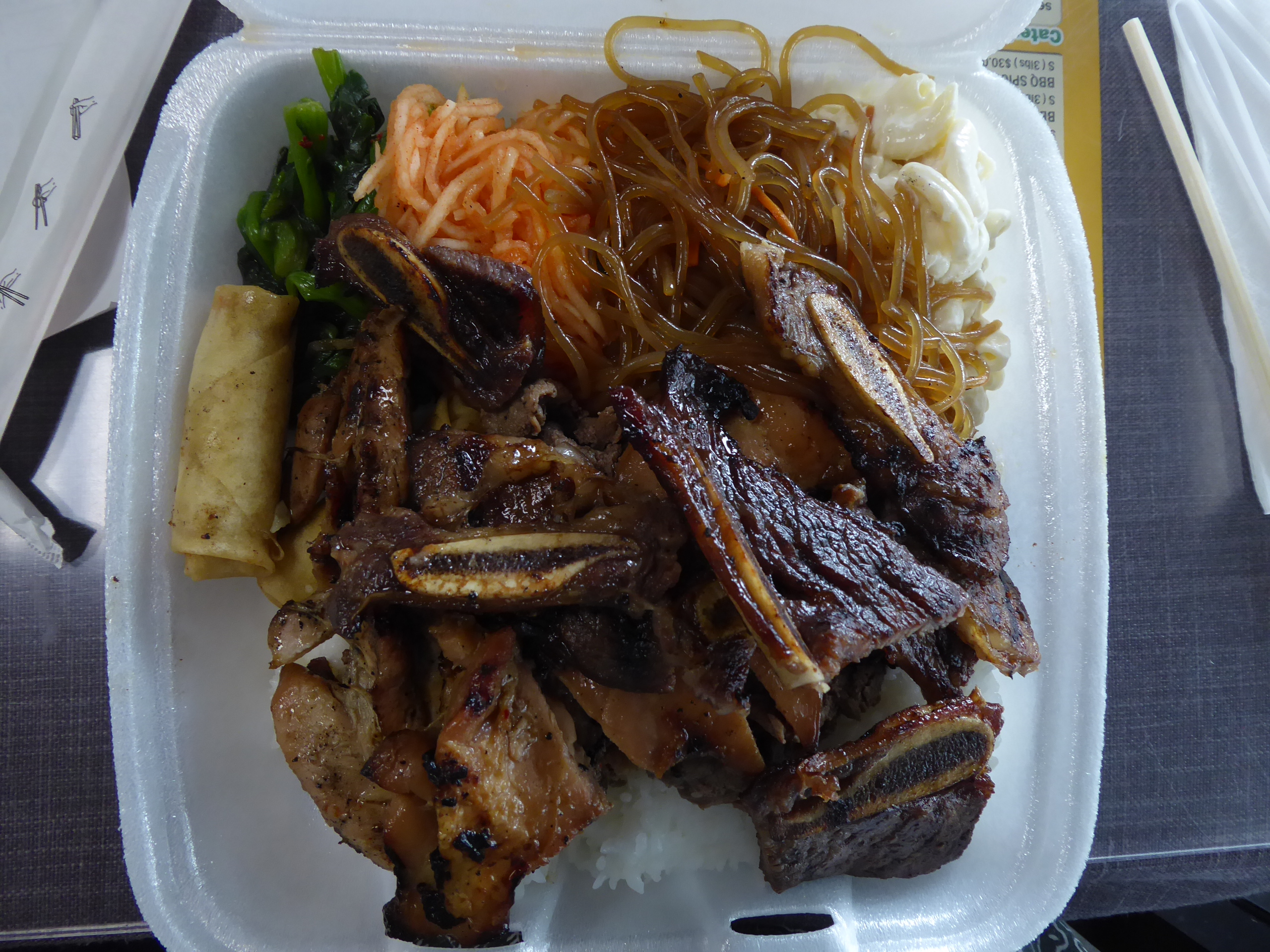 24 thoughts on “Hawaii: A trip to the Waikiki Aquarium (and lunch)”