I have arrived, and yesterday spent my first full day on Oahu. It was a good day, too, greeting my favorite cat, seeing green sea turtles haul themselves out of the surf to bask in the sand on the island’s North Shore, and having a great Hawaiian plate lunch. Here’s the drill.

I was greeted by my favorite cat, Pi, a rescue gray Persian who’s been shaved down because of the heat: 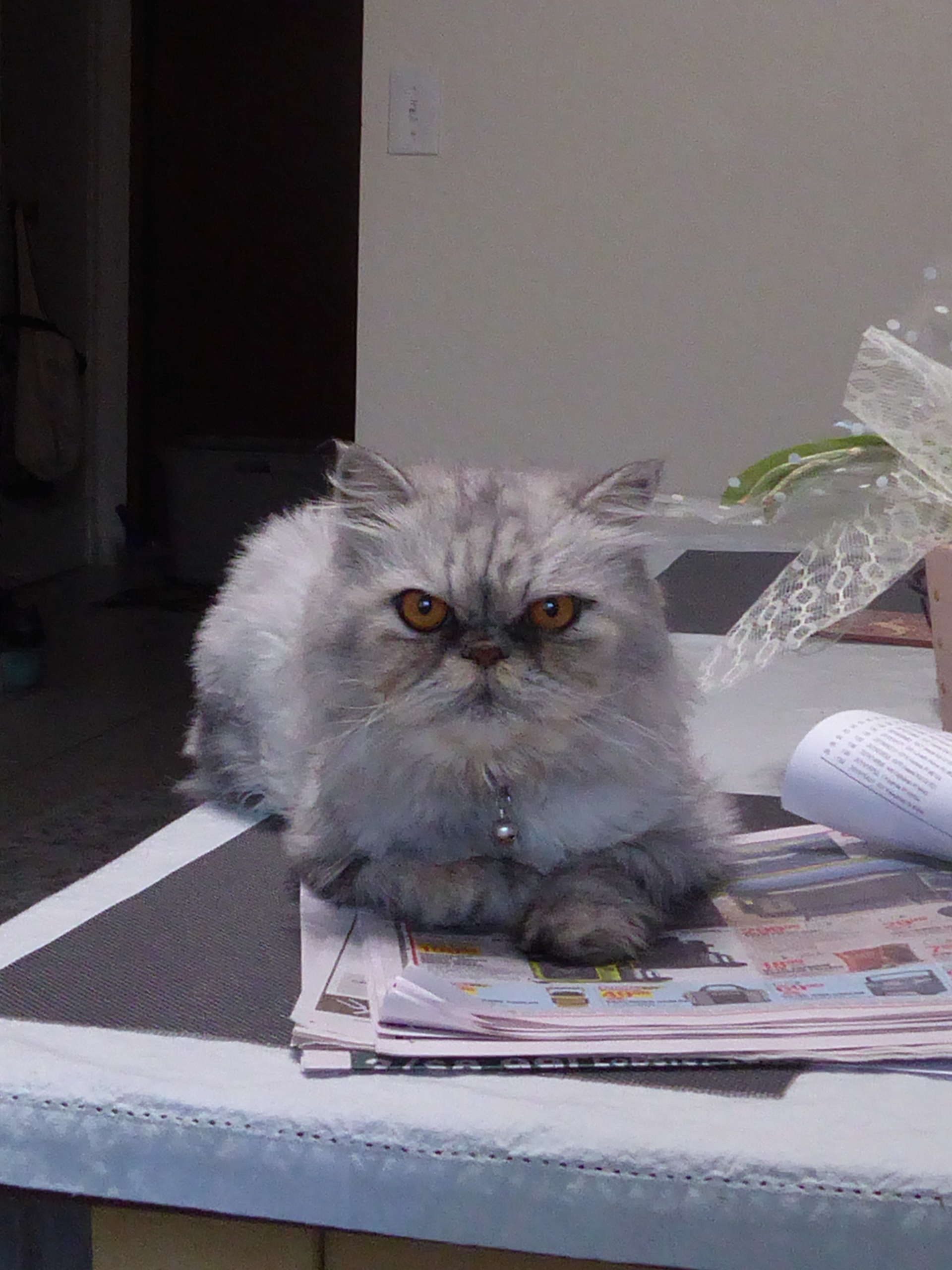 He looks a bit like Grumpy Cat, or rather, the oatmeal flack Wilford Brimley, but Pi is a real sweetheart. I love him to bits. 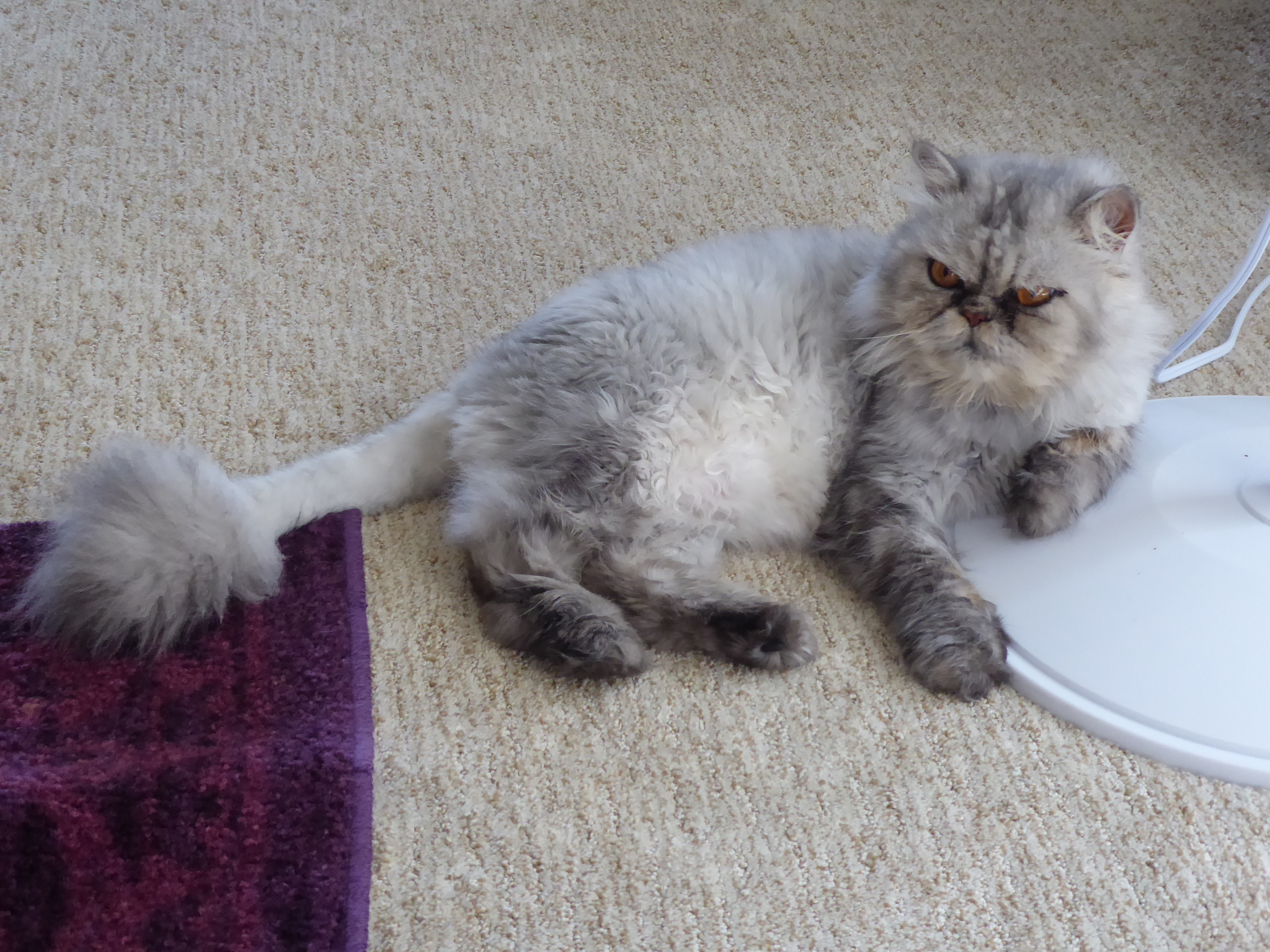 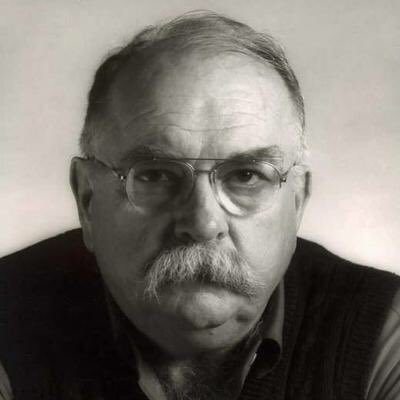 After breakfast (a rare bagel and lox for me), we headed for Laniākea Beach, famous as a spot on Hawaii’s North Shore where Hawaiian green sea turtles haul themselves out of the surf to bask on the beach. We were lucky enough to see two of them engage in this endearing activity.

Here’s the location of the trip, but instead of taking the “middle road” to the north, we drove east to the road along the island’s east (windward) coast and then around to Laniakea: 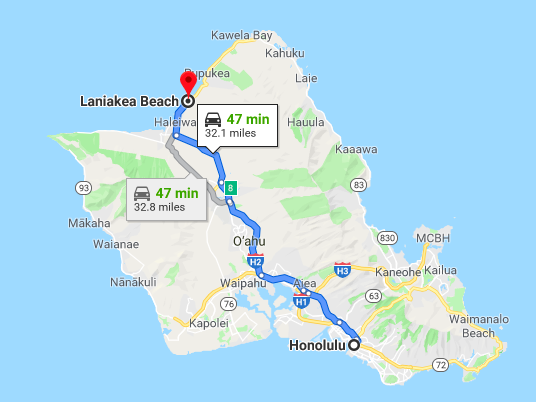 The shore road is gorgeous, and, in the morning, is not too crowded with tourists. Along the way is the famous island called Mokolii, but better known as “Chinaman’s Hat” (don’t judge me; I didn’t name it that): 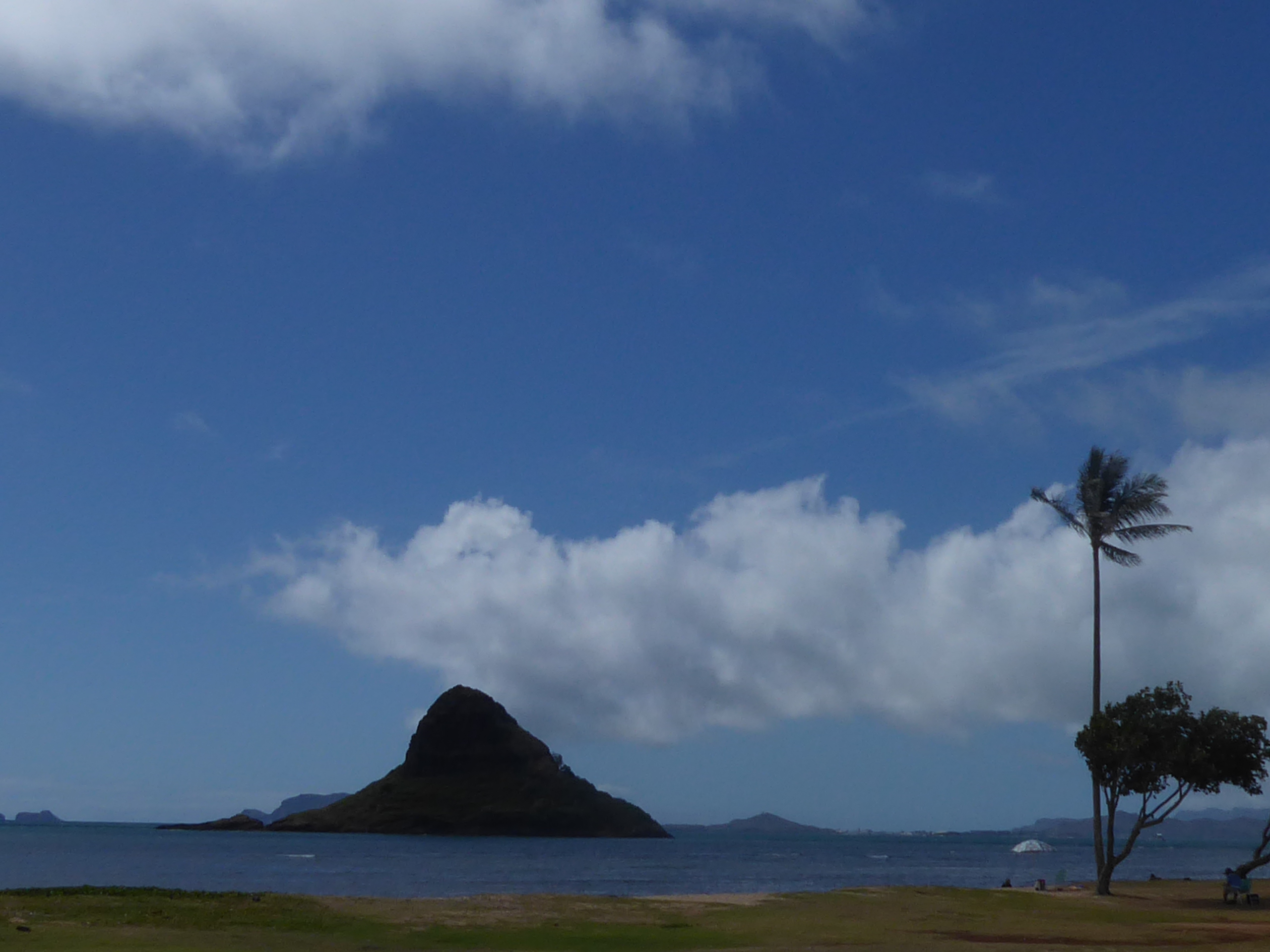 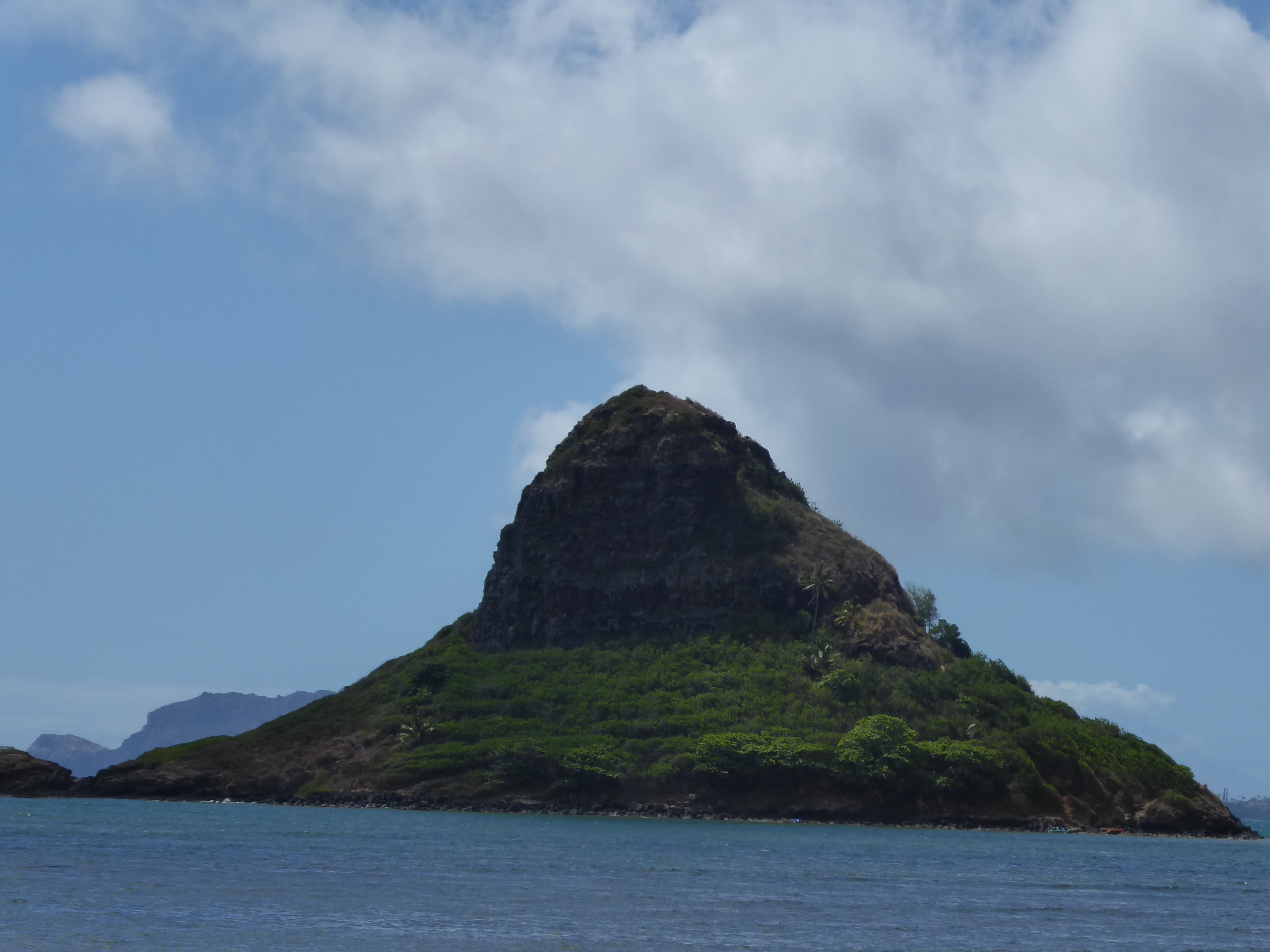 The beach was already crowded when we arrived by 10:30, but we found a parking spot, got our snorkel gear (I did a wee bit of snorkeling, though the fish were sparse), and headed to the beach. Here it is, and a lovely beach it is, too: 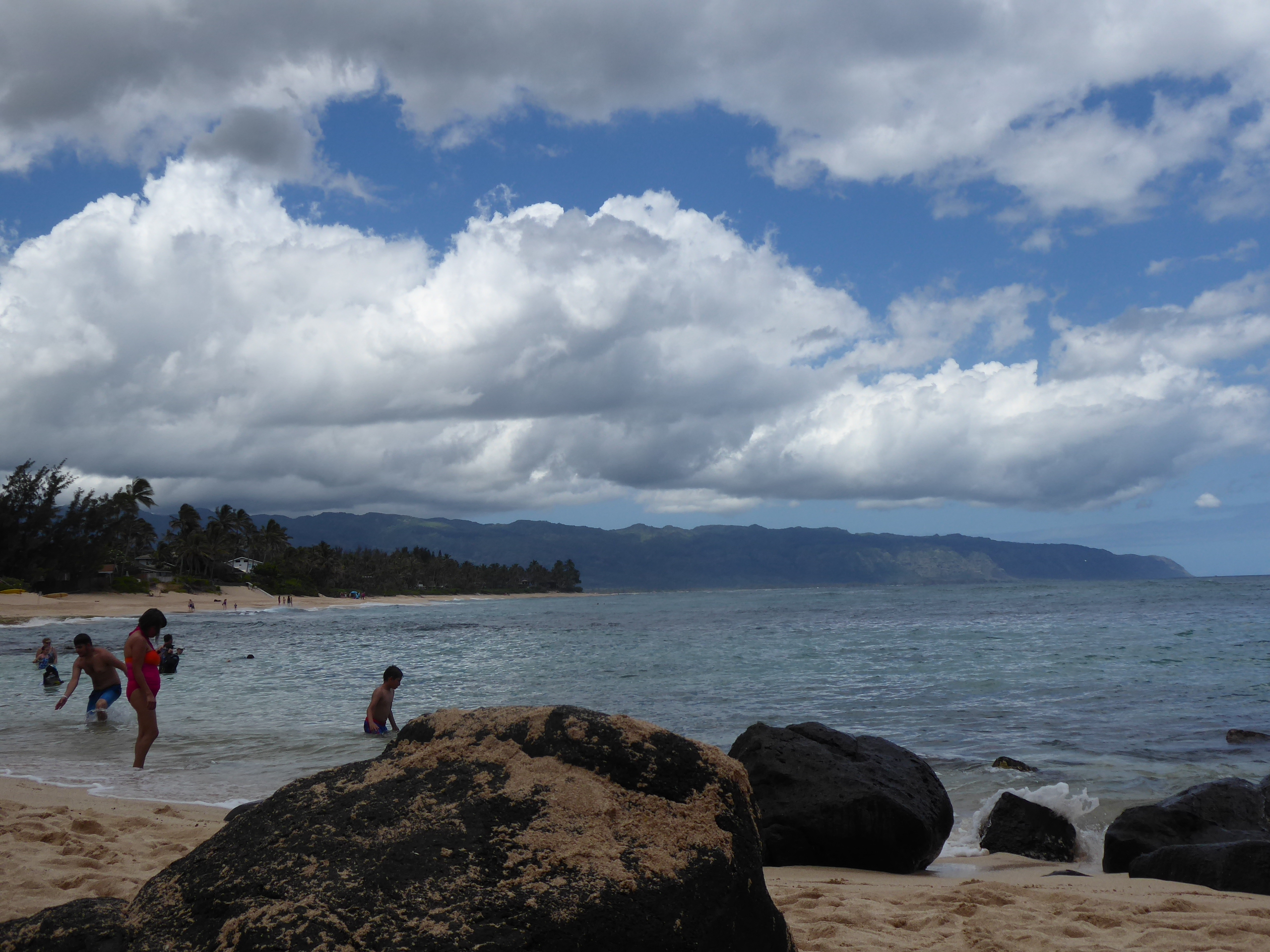 When we saw these signs we knew we were on the right track: 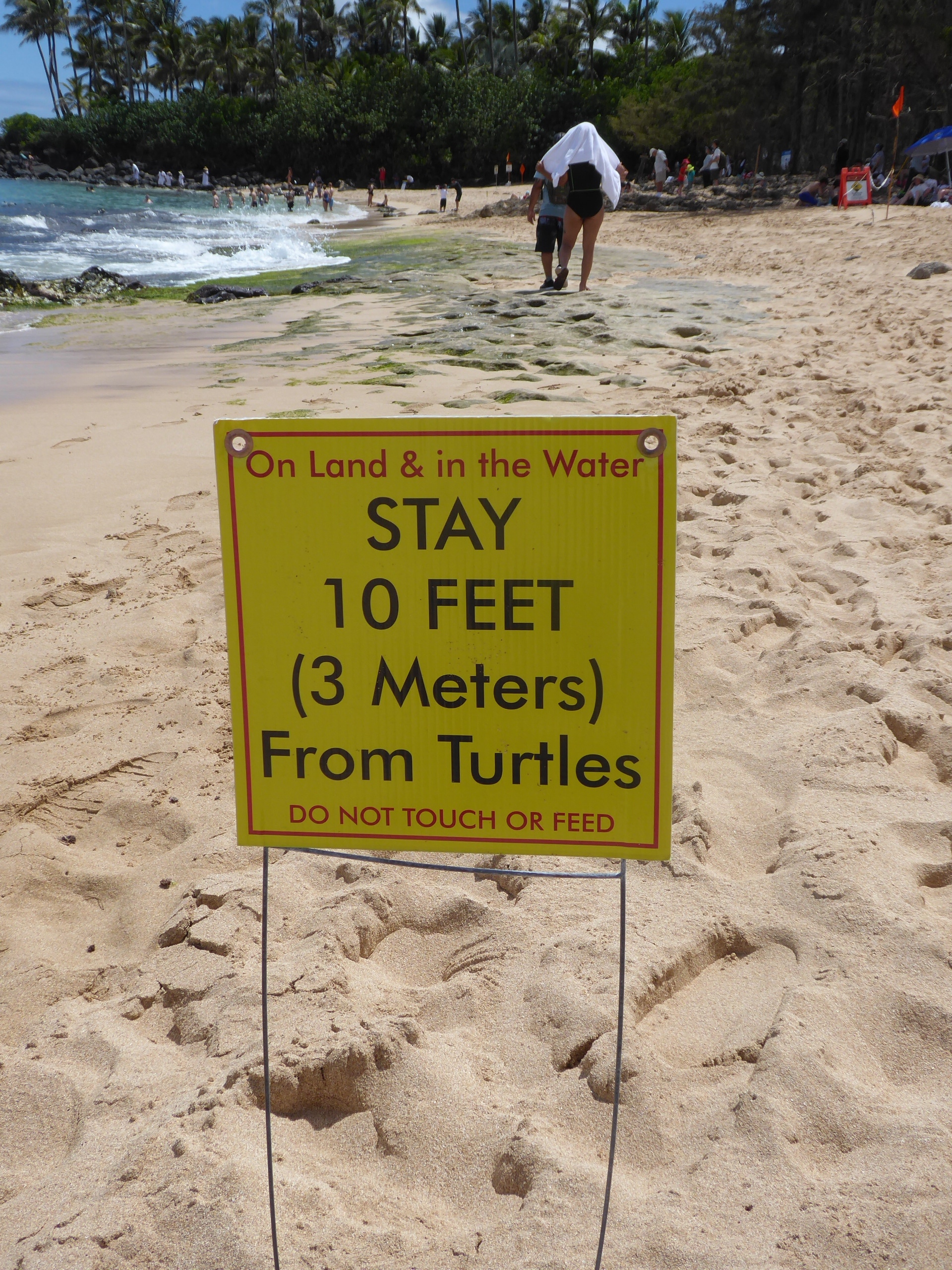 The Hawaiian green sea turtle is just a local population of the endangered green sea turtle (Chelonia mydas), which lives and feeds (on algae, seaweed and jellyfish) in Hawaii, but breed, I was told, in some “sub-aleutian islands” about 500 miles to the north. They attain reproductive maturity at about 25 years old, and can live up to 100 years.

During the breeding period, they lay several clutches of about 100 eggs each. Given this, and that they can reproduce about every other year for at least 25 years, and add to that the fact that, in a stable population, each female will leave only two reproductive adults, you can see that the mortality rate is high: well over 99%. 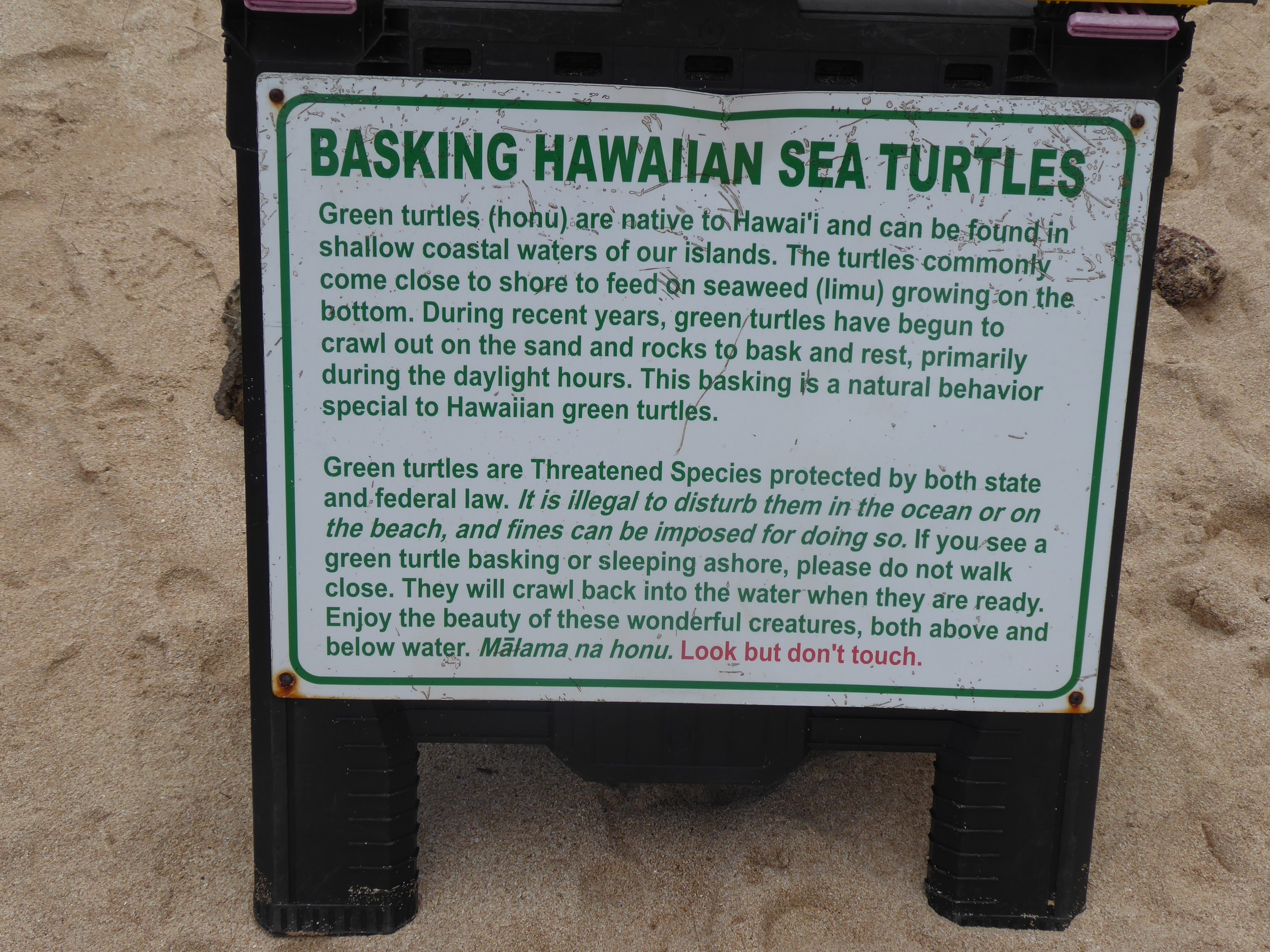 The turtle watchers (volunteers who keep people away from the beached and swimming turtles, and kudos to them), told us that they tend to come ashore at about noon. We laid out our towels and waited. Turtles hadn’t shown up for the past few days, but we lucked out.

Sure enough, about noon a juvenile turtle (they told us it was probably a female, 10-15 years old) hauled itself slowly and painfully out of the water and onto the beach. A sequence:

Can you spot the turtle off the beach? 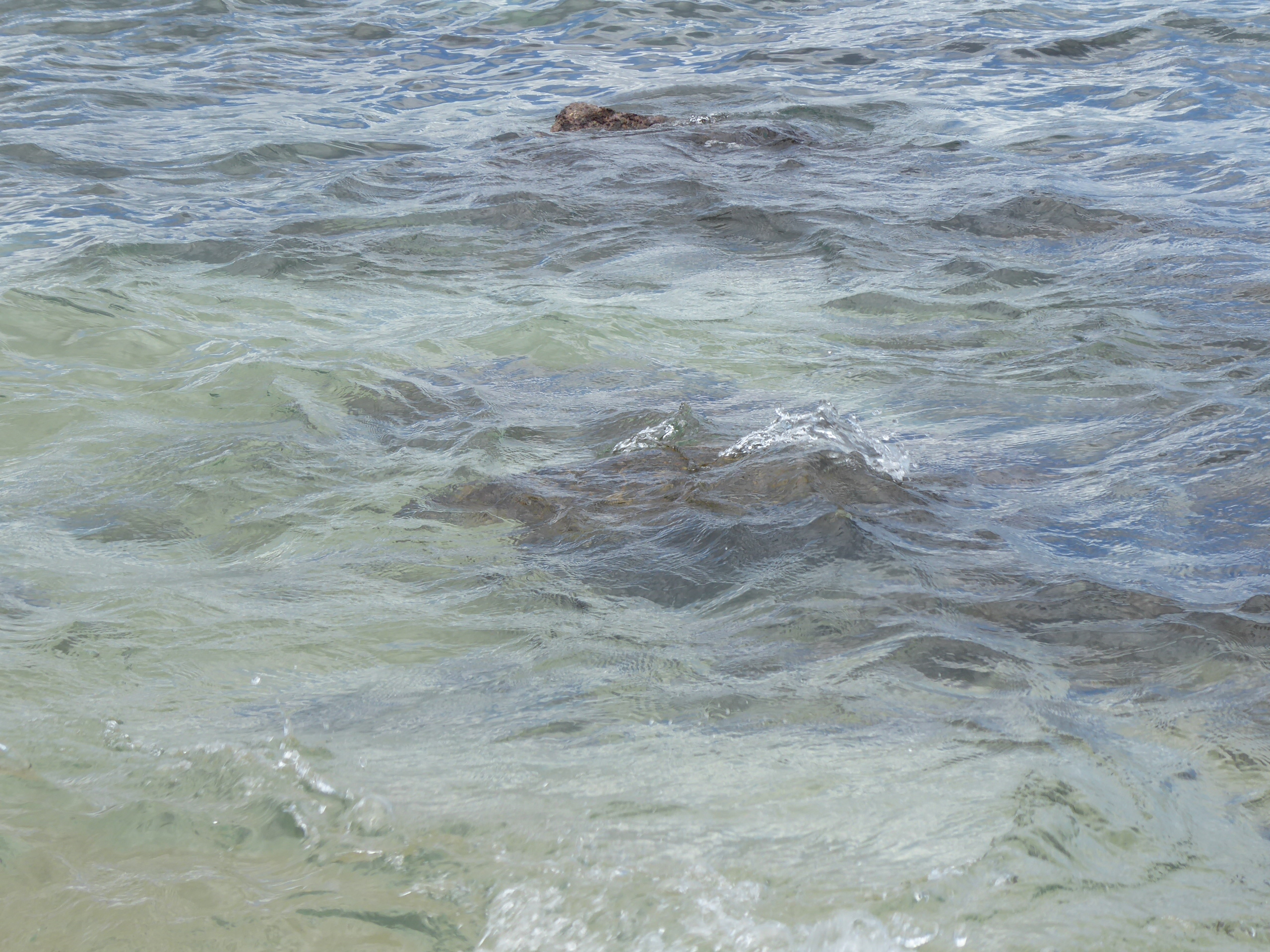 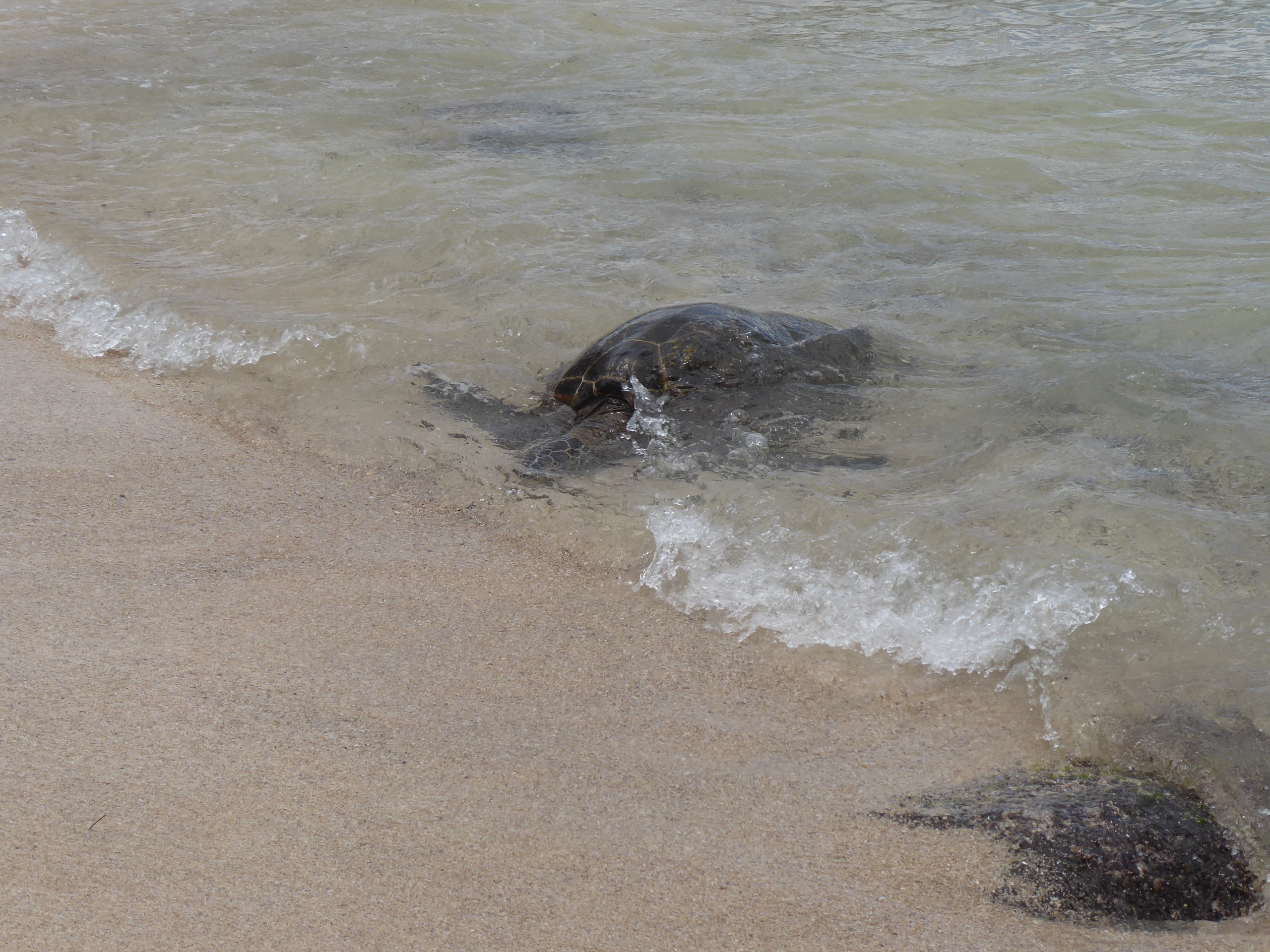 Using its flippers (what Steve Gould would call an exapatation), it hauled itself slowly and painfully onto the beach, stopping above the wave level: 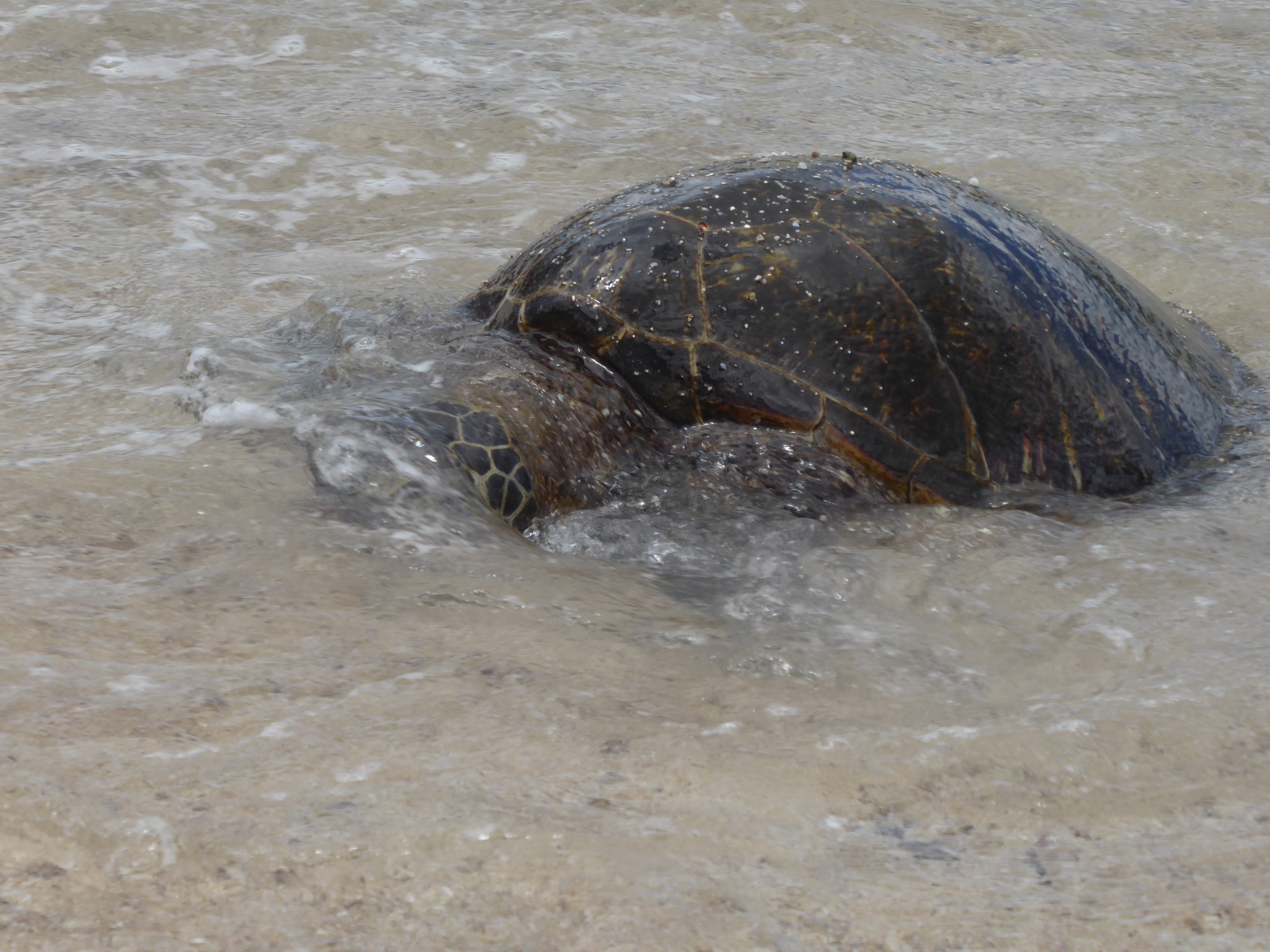 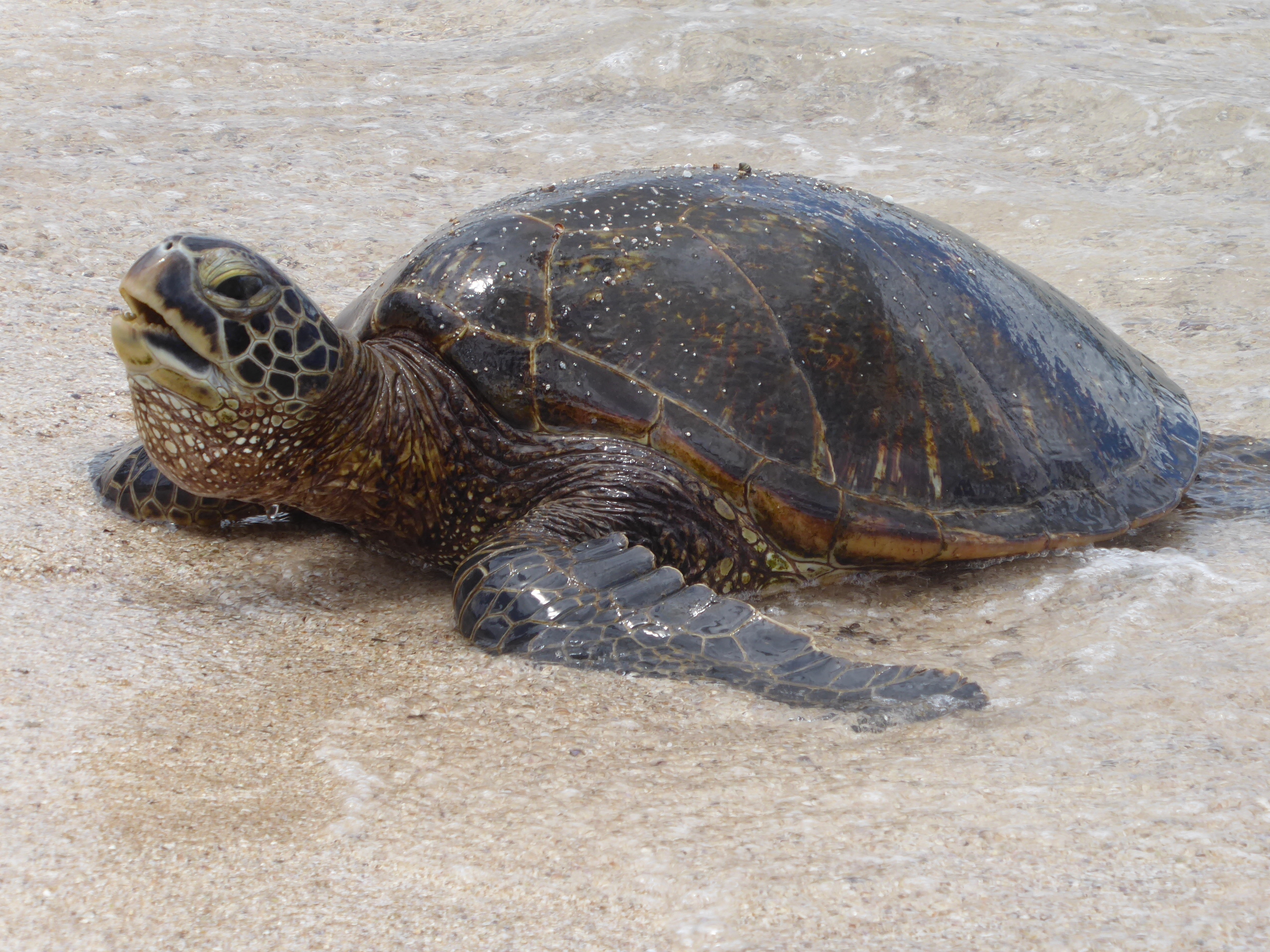 They have such beautiful eyes, which gave rise to the name of this one (see below): 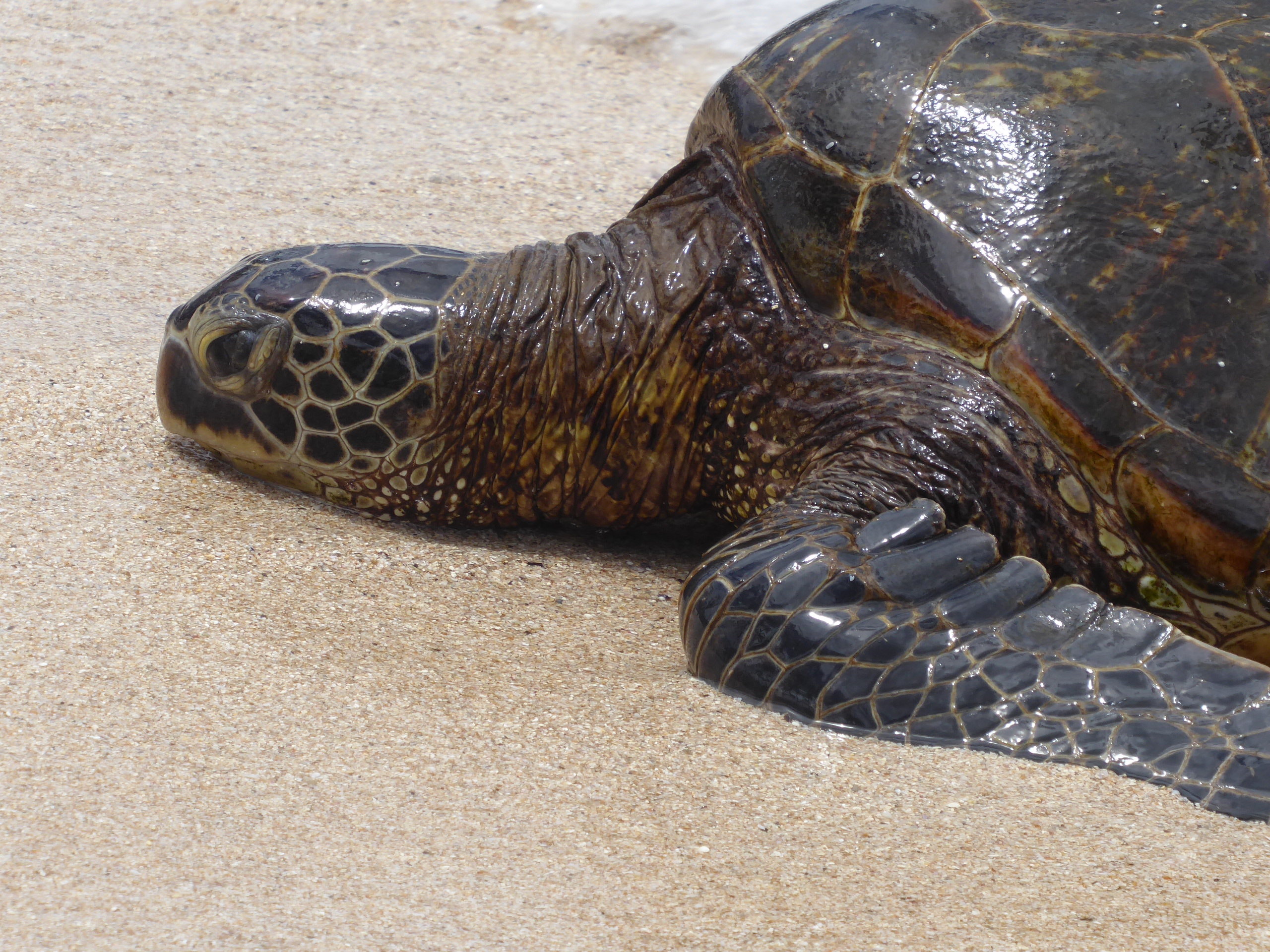 Researchers recognize the turtles by the pattern of scales around their eyes, which is unique, though some turtles have been microchipped to study their migration. The Turtle Guardians have signs for some of the most frequently-visiting animals, and so this one was Maka Nui: 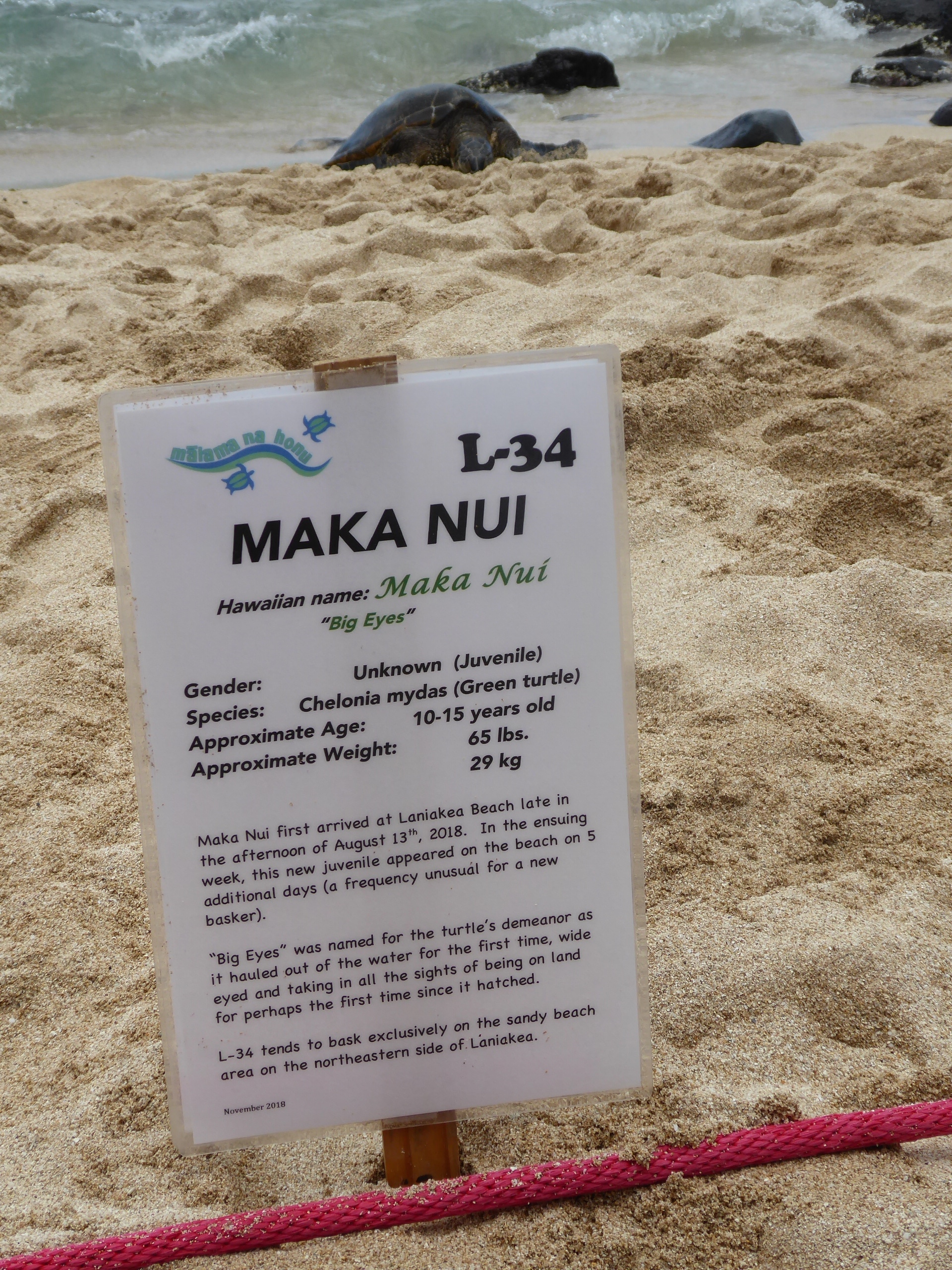 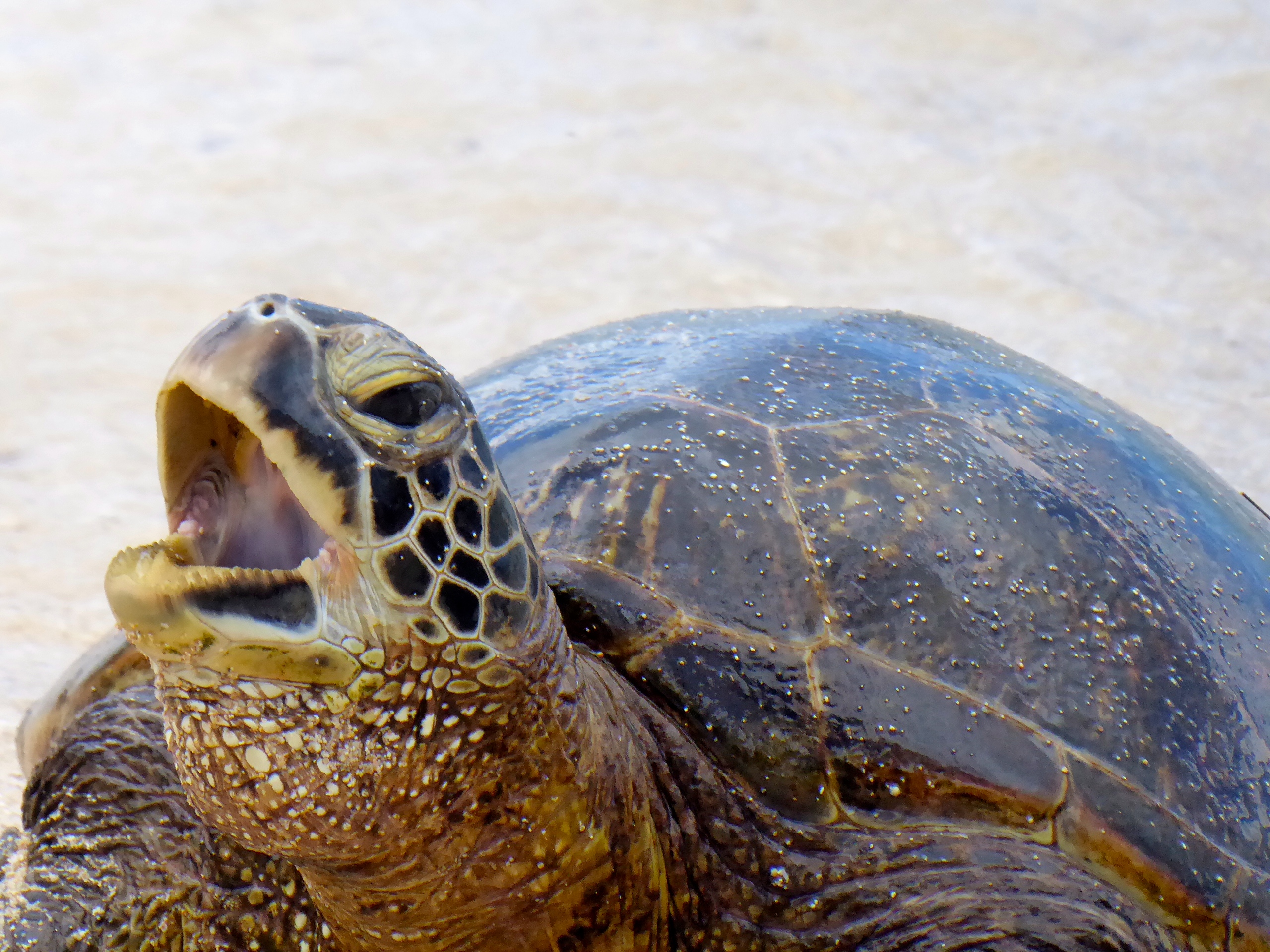 Finally, it rests, closes its eyes, and soaks up the sun: 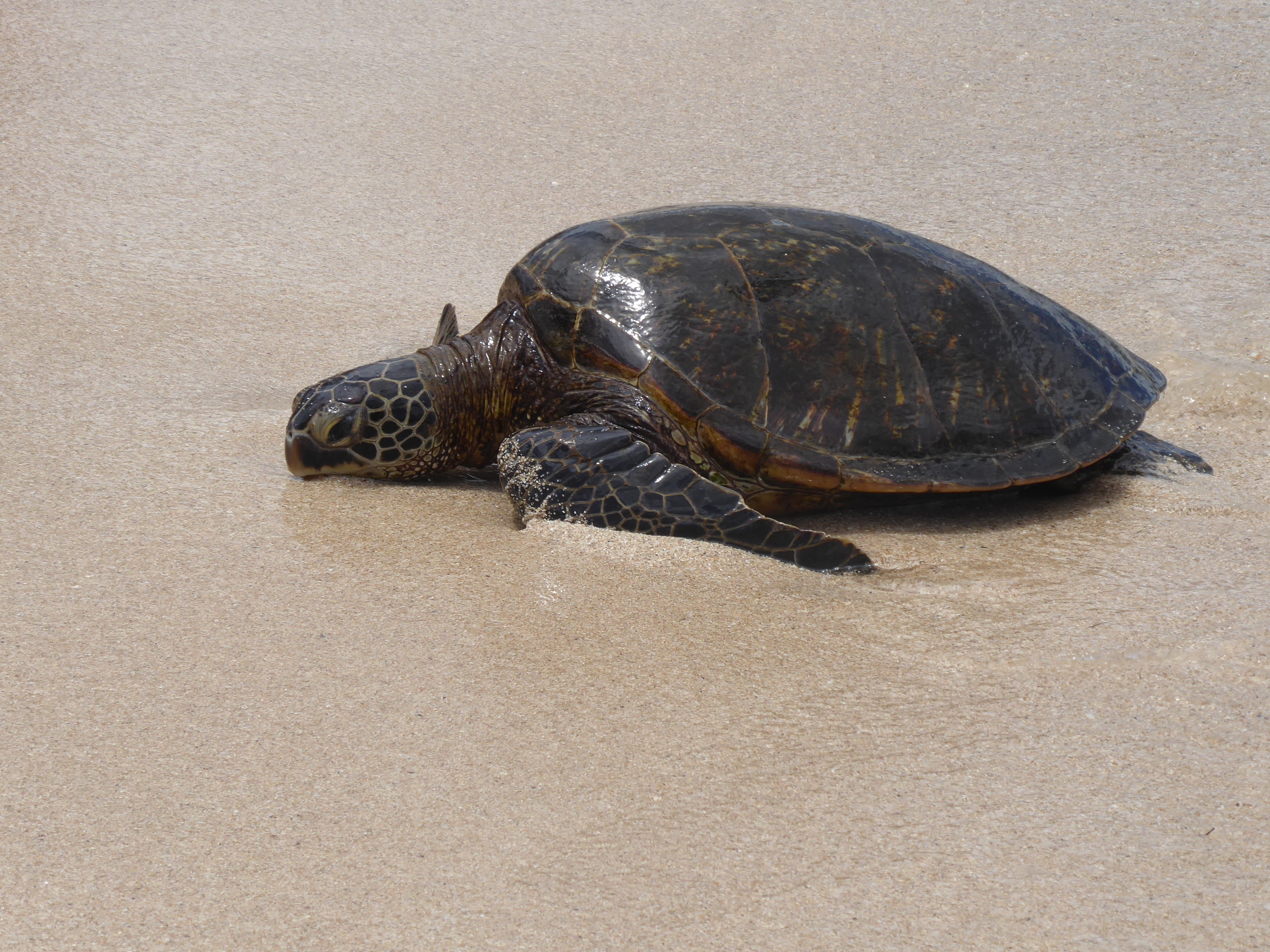 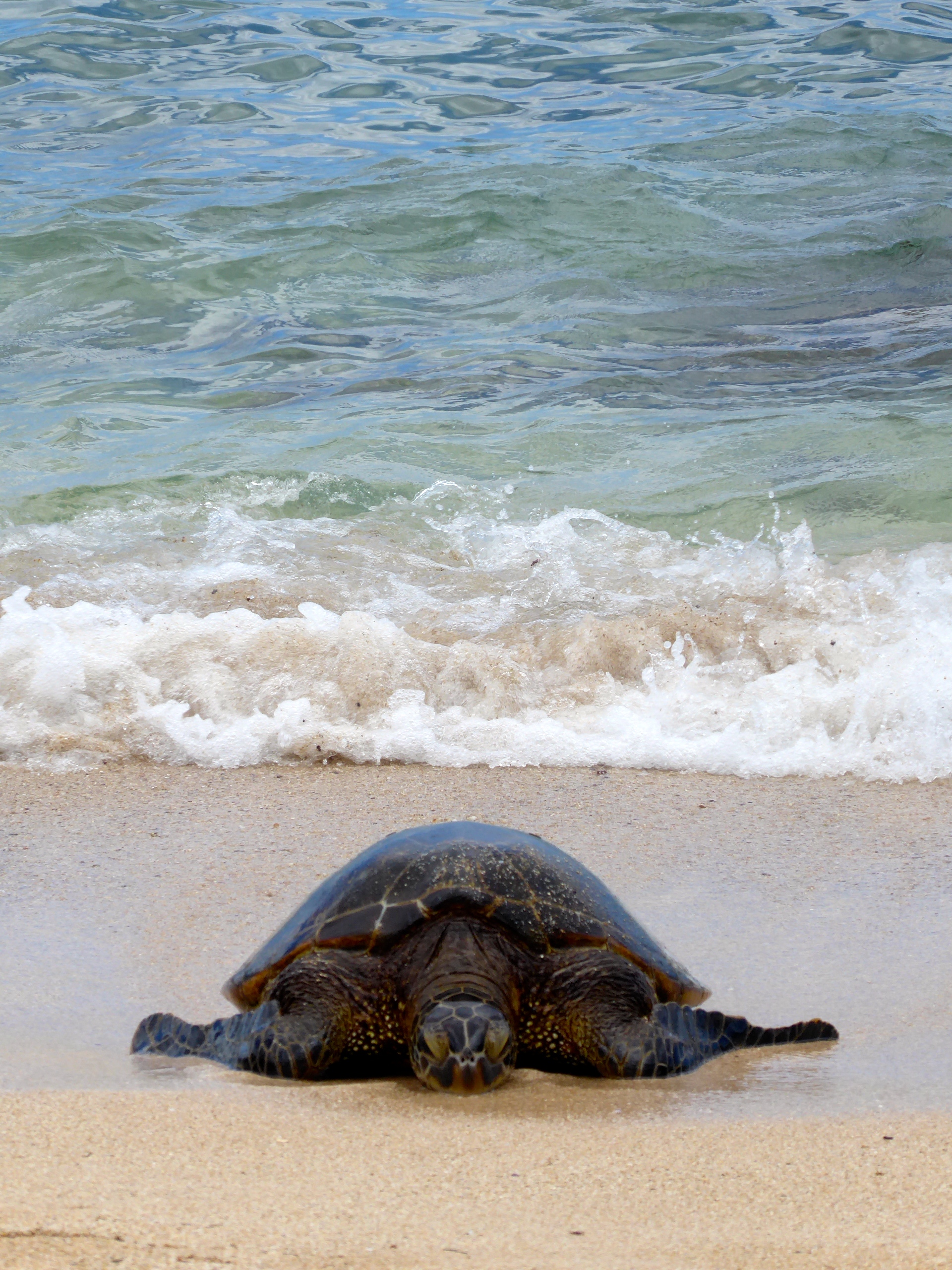 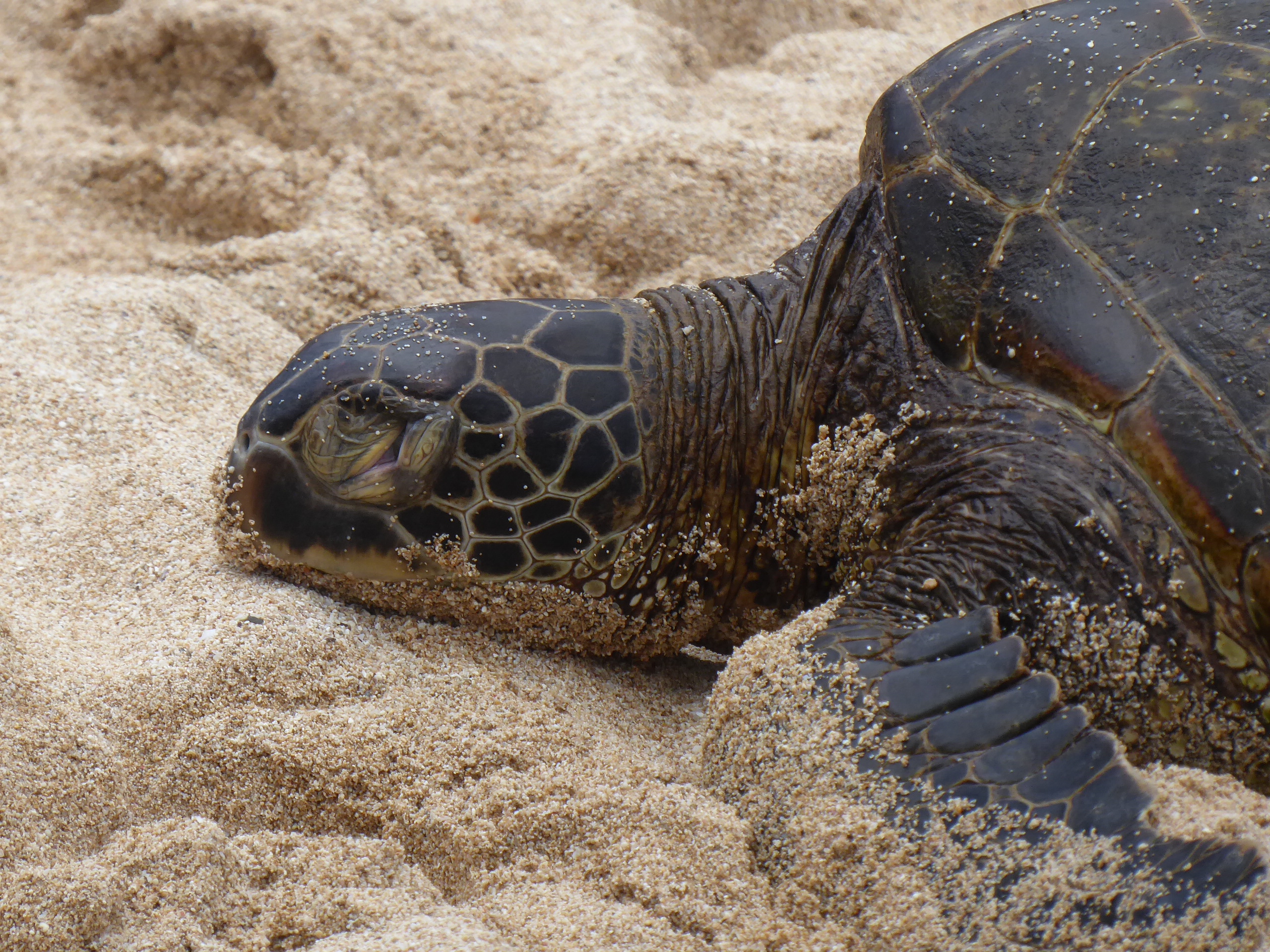 Here are three videos of the hauling-out:

Of course the tourists and beachgoers gather round, but are kept away from the turtle by an orange rope with a radius of about ten feet, adhering to regulations: 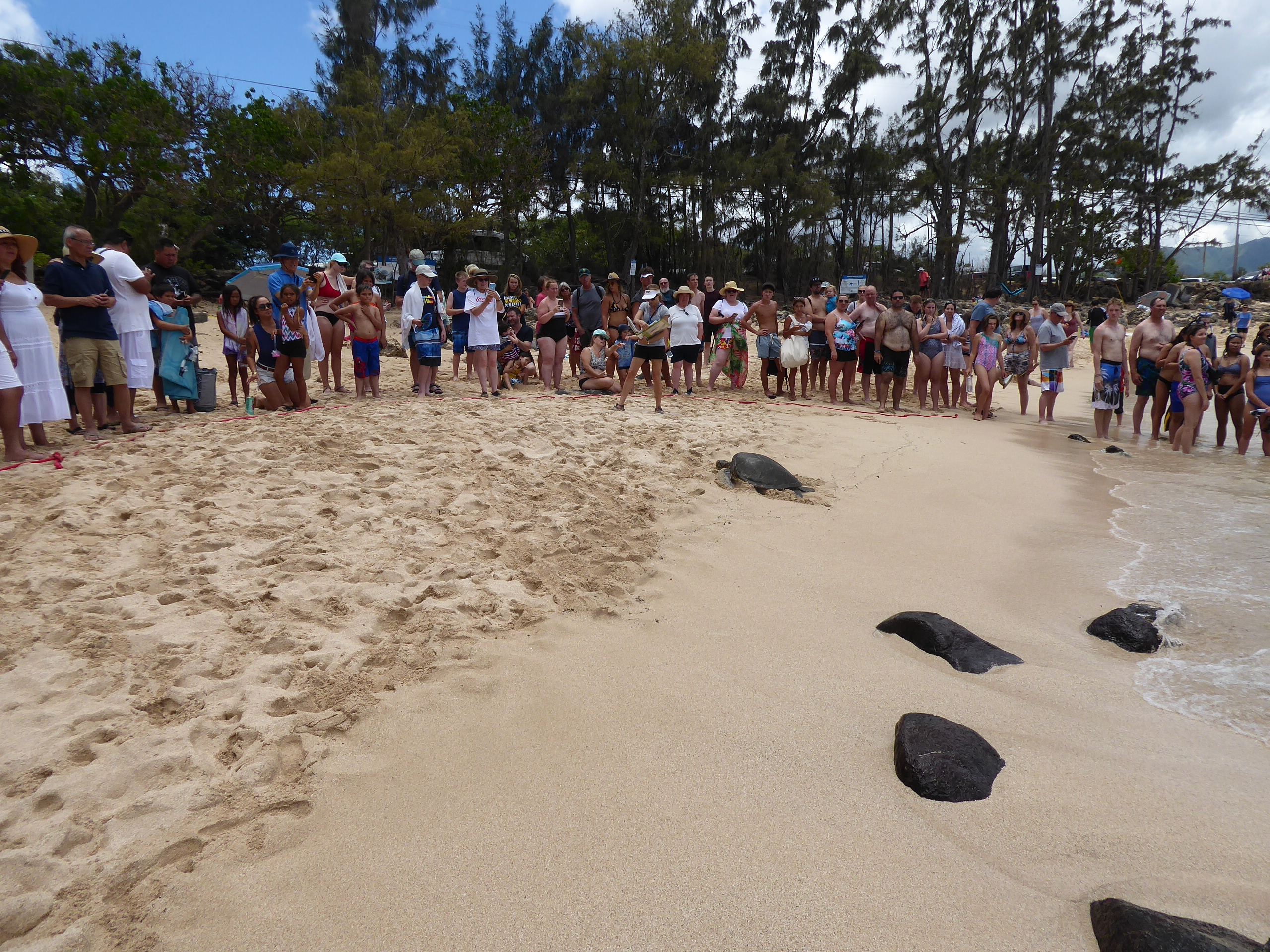 As we left, another juvenile female came ashore: 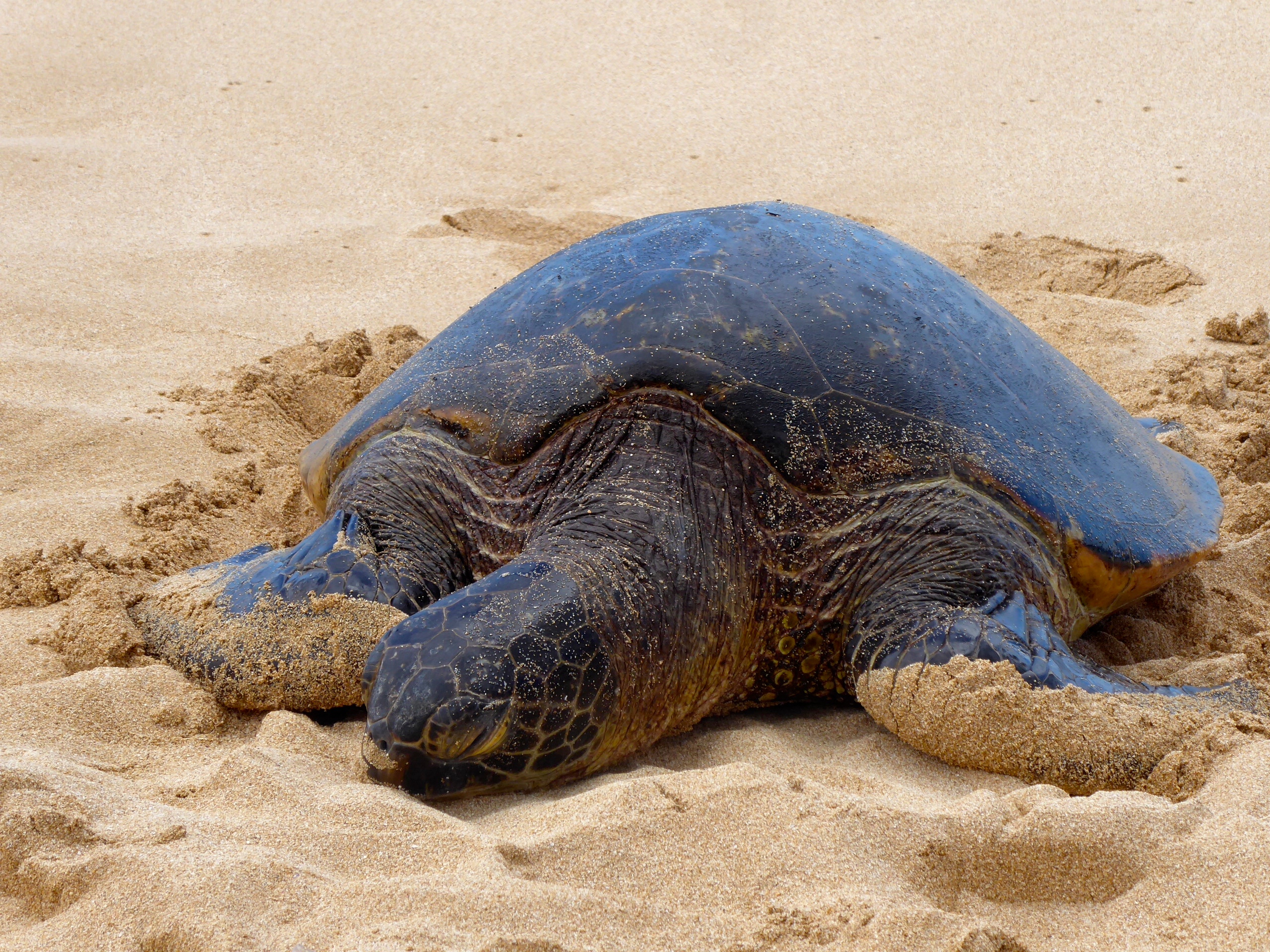 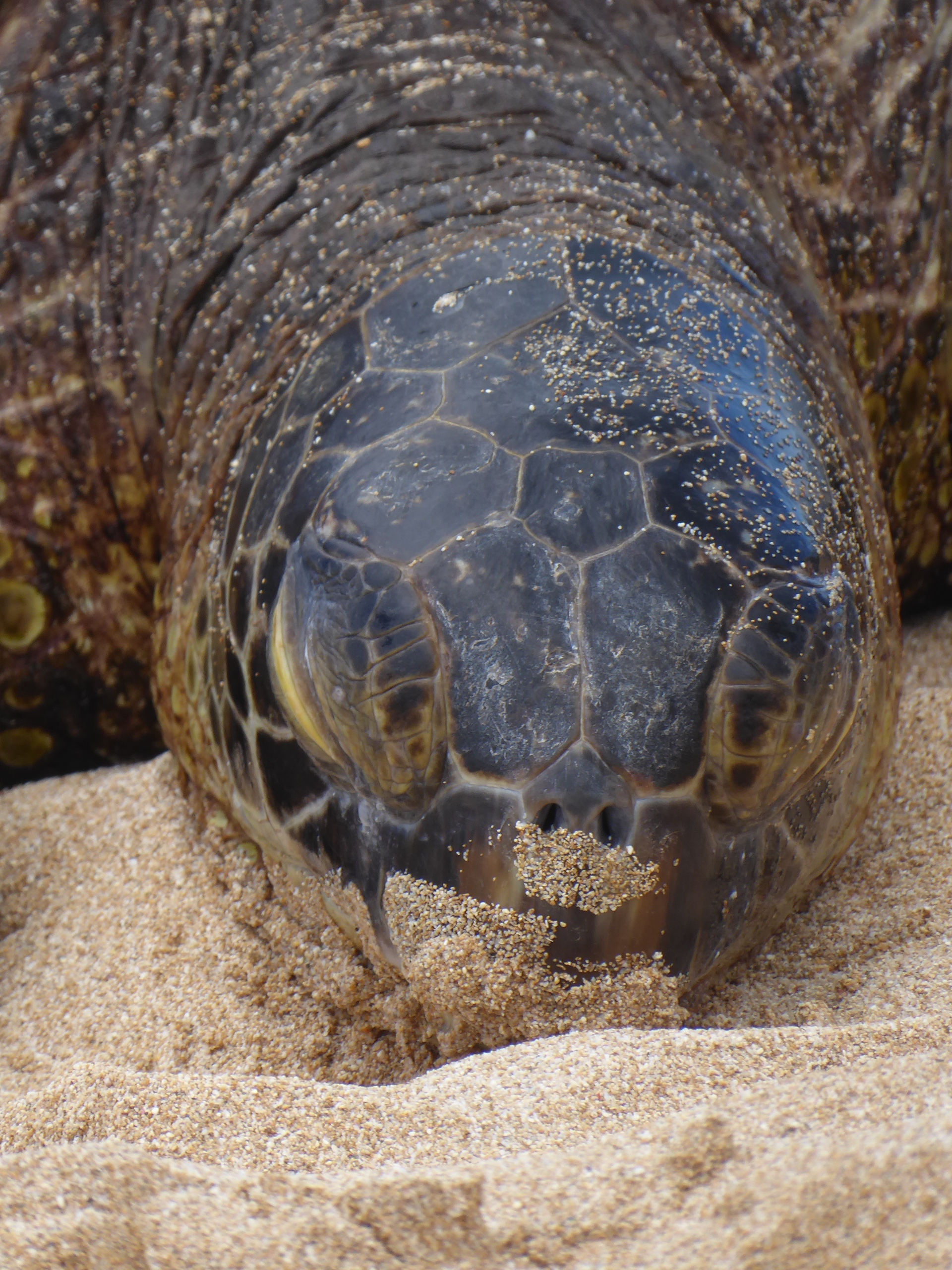 Snorkeling, sunning, and photographing turtles makes you hungry, and fortunately we were in one of the best Hawaiian plate-lunch places on Oahu, the Waihole Poi Factory, which makes its own fresh poi. Here’s the place, which, as you can see, is unprepossessing. But what treats come from within! 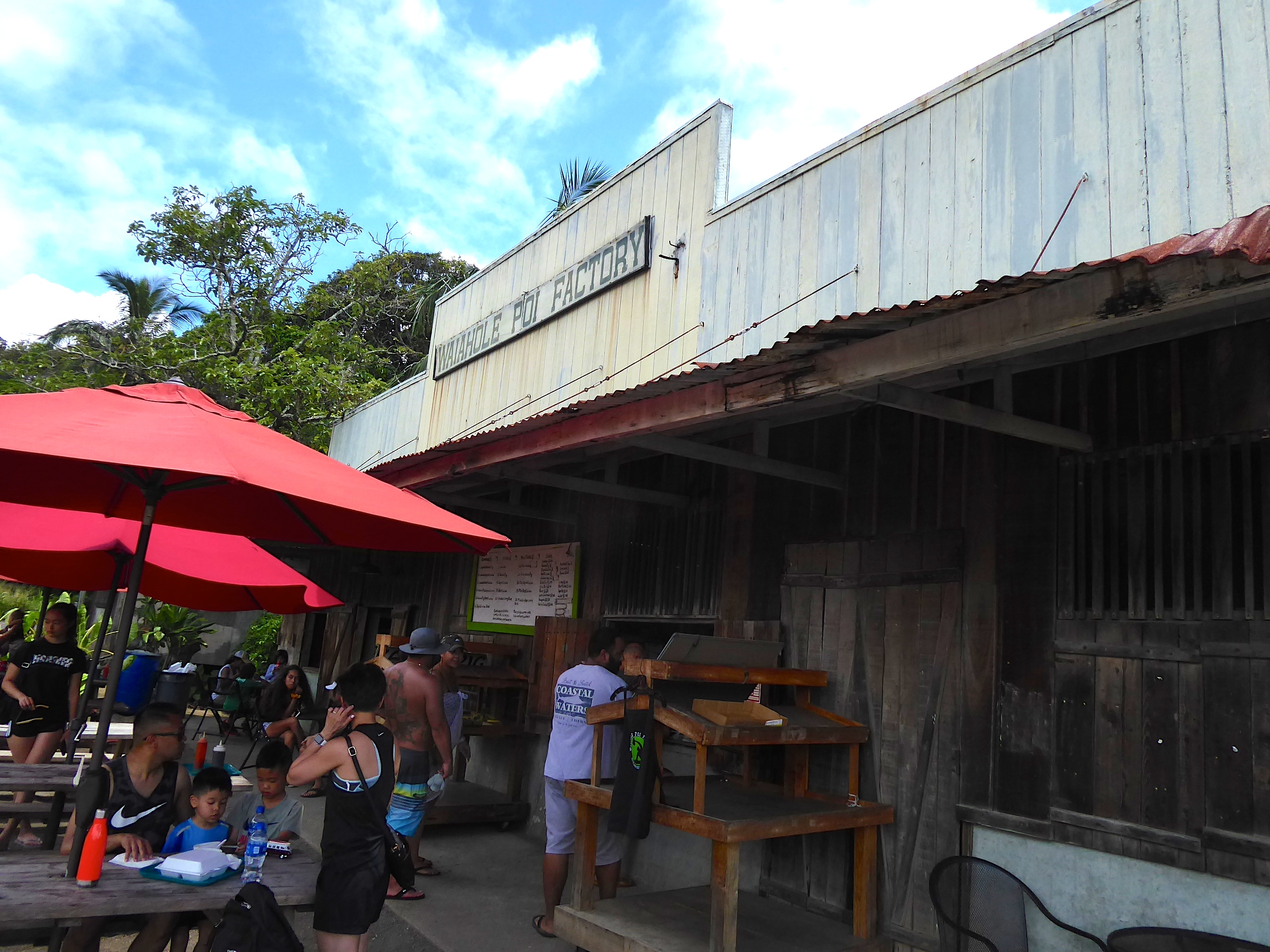 If you’re on the east side of the island, don’t miss the Waihole Poi Factory! 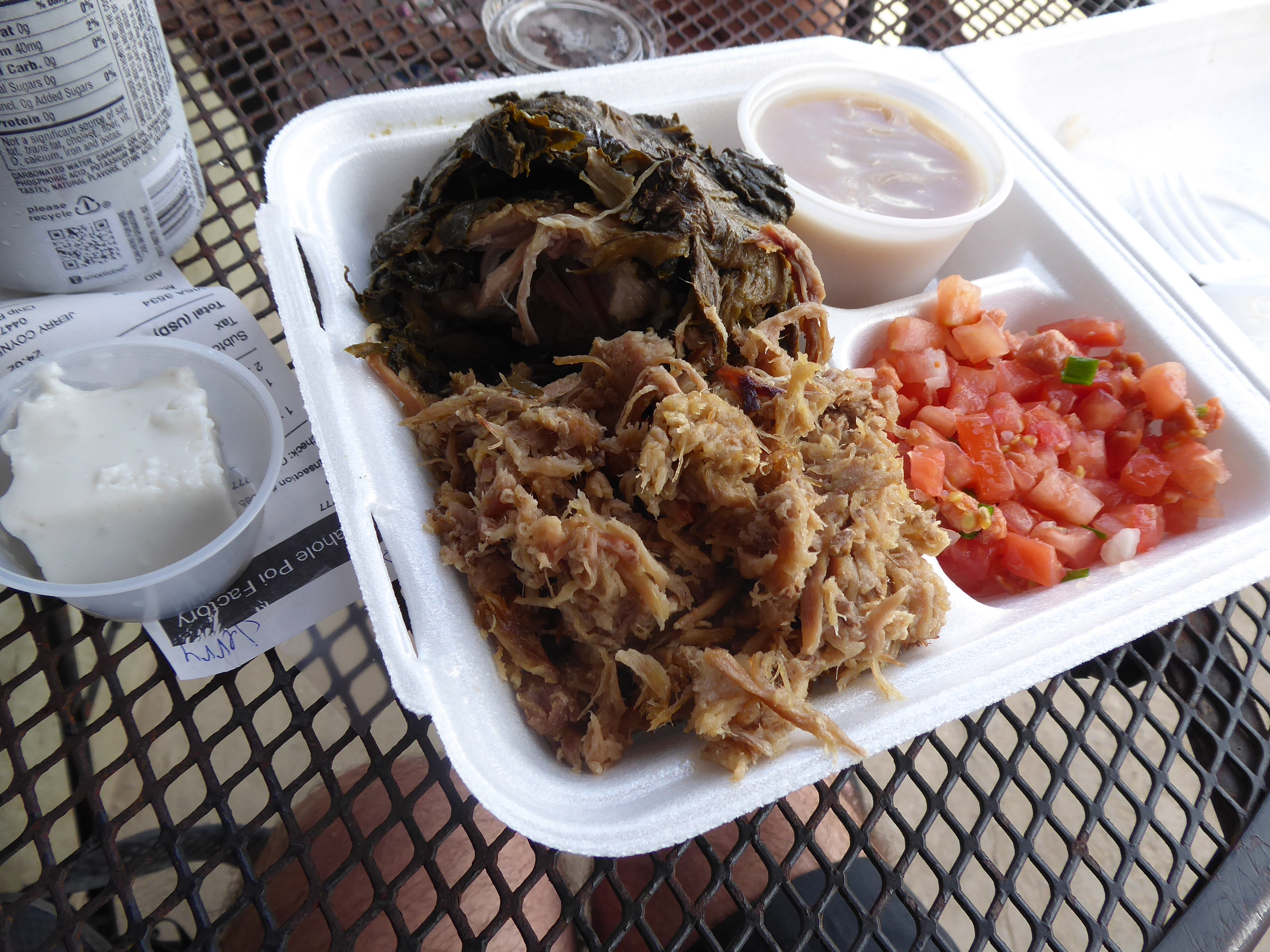 Self aggrandizing photos: me snorkeling at the top (middle bottom), and photographing the turtle (photos by Nilou): 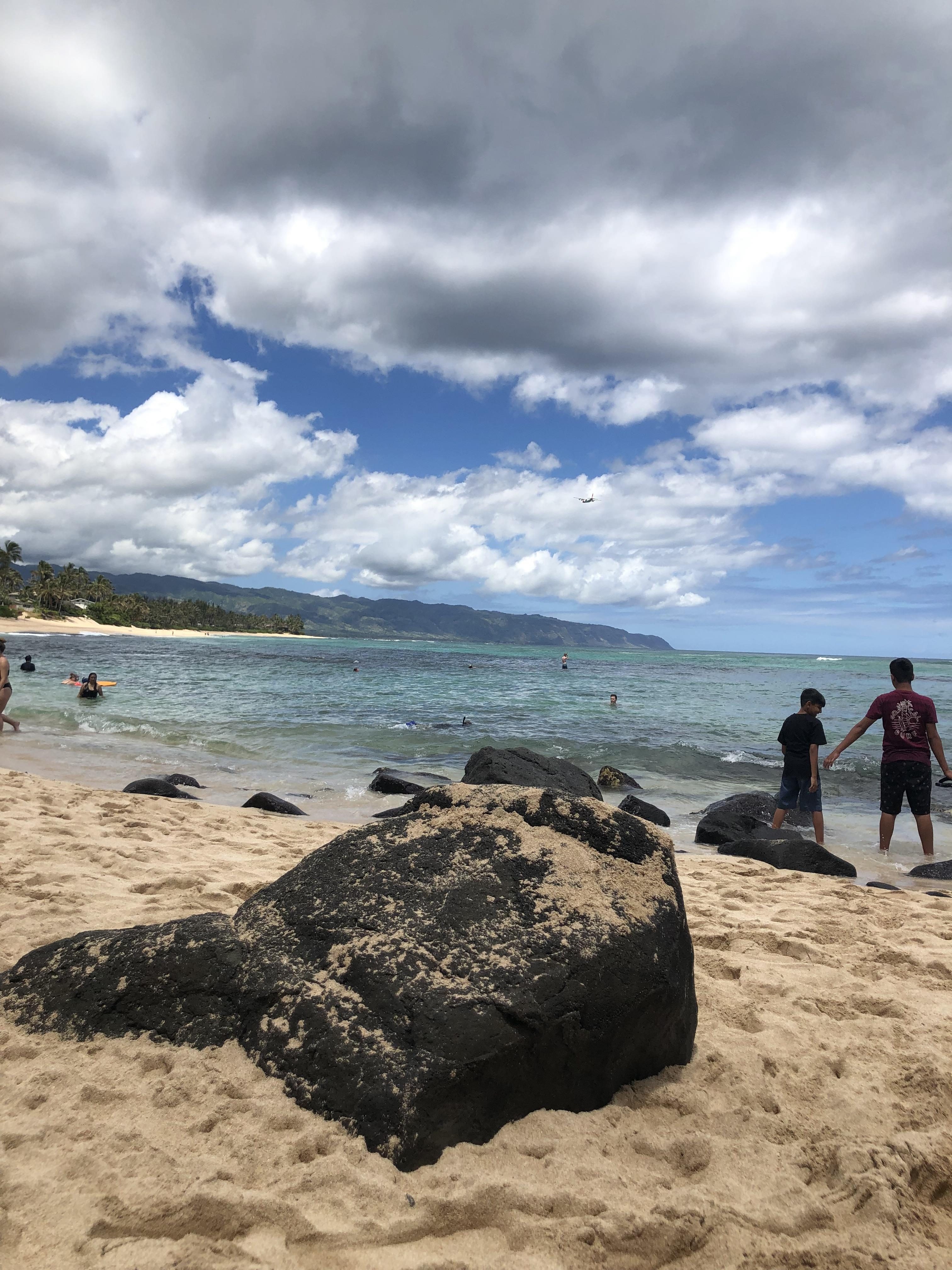 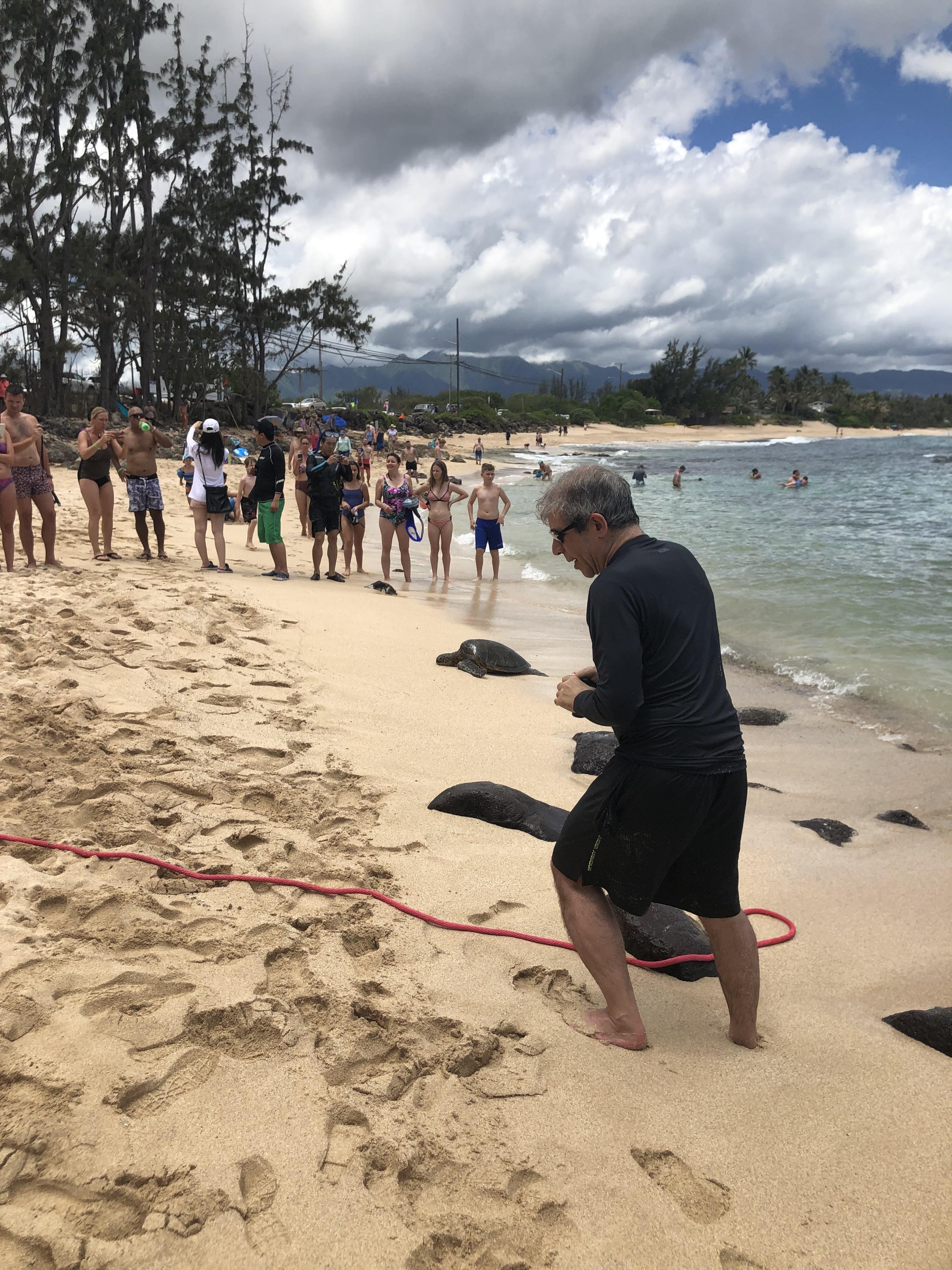