Reader Robert called my attention to a 2013 paper in Climatic Change (described by Drexel University as “one of the top 10 climate science journals in the world”) that tracked the source of money given to American climate-denialist organizations. While the results may be out of date, it shows that over at least seven years, the Templeton Foundation gave more than twenty million dollars to organizations—mostly think tanks—opposing the idea of anthropogenic climate change. (Note added in proof: I discovered that I’d written a long post about this paper six years ago, but, rather than repeat what I said, or call your attention to an earlier post, I’ll give a shorter version here.)

The paper’s author is Robert Brulle, described by Wikipedia as

A free pdf of the full paper can be downloaded at this link or by clicking on the screenshot below. 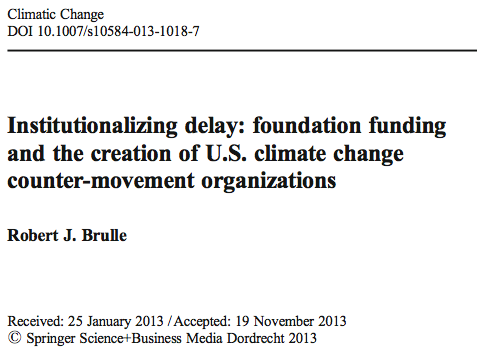 Or click here to see a Drexel-written summary of Brulle’s paper:

Brulle used Internal Revenue Service data to find out both which organizations were making donations to climate change counter-movement (CCCM) organizations (see the list below) as well as data from the CCCM groups’ tax reports to find out where their money was coming from. In total, he found data from 91 different CCCM organizations funded by 141 foundations between 2003 and 2010. It would be nice to have a more recent sample, though some foundations, as reported below, hide their contributions by funneling them through untraceable sources.

The four main points of the paper are outlined by the Drexel site (quotations direct).

2.) Koch and ExxonMobil have recently pulled back from publicly visible funding. From 2003 to 2007, the Koch Affiliated Foundations and the ExxonMobil Foundation were heavily involved in funding climate-change denial organizations. But since 2008, they are no longer making publicly traceable contributions.

3.) Funding has shifted to pass through untraceable sources. Coinciding with the decline in traceable funding, the amount of funding given to denial organizations by the Donors Trust has risen dramatically. Donors Trust is a donor-directed foundation whose funders cannot be traced. This one foundation now provides about 25% of all traceable foundation funding used by organizations engaged in promoting systematic denial of climate change.

4.) Most funding for denial efforts is untraceable. Despite extensive data compilation and analyses, only a fraction of the hundreds of millions in contributions to climate change denying organizations can be specifically accounted for from public records. Approximately 75% of the income of these organizations comes from unidentifiable

The fact that organizations are hiding their donations is of course worrying, but also shows that the companies know they’d get bad publicity from giving money to CCCMs. Donors Trust, which gives 25% of all money to CCCM over the period, is designed to hide the source of donations. As Brulle’s paper states:

Of special interest in this regard is that Donors Trust and Donors Capital are both “donor directed” foundations. In this type of foundation, individuals or other foundations contribute money to the donor directed foundation, and it then makes grants based on the stated preferences of the original contributor. This process ensures that the intent of the contributor is met while also hiding that contributor’s identity. Because contributions to a donor directed foundation are not required to be made public, their existence provides a way for individuals or corporations to make anonymous contributions. In effect, these two philanthropic foundations form a black box that conceals the identity of contributors to various CCCM organizations.

While I suppose this is legal, I don’t know why it should be, for the donations still go to the specified recipient.

And here’s the breakdown of money given to CCCMs from 2003-2010 by various foundations. Brulle’s paper summarizes the results visually presented in the pie chart (my emphasis in both the words and the chart):

Figure 1 shows the overall amount and percentage distribution of foundation funding of CCCM organizations. The single largest funders are the combined foundations Donors Trust/Donors Capital Fund. Over the 2003–2010 period, they provided more than $78 million in funding to CCCM organizations. The other major funders are the combined Scaife and Koch Affiliated Foundations, and the Bradley, Howard, Pope, Searle and Templeton foundations, all giving more than $20 million from 2003–2010.

The size of the donations, in descending order are given as the pie slices going clockwise from “others” at the bottom: 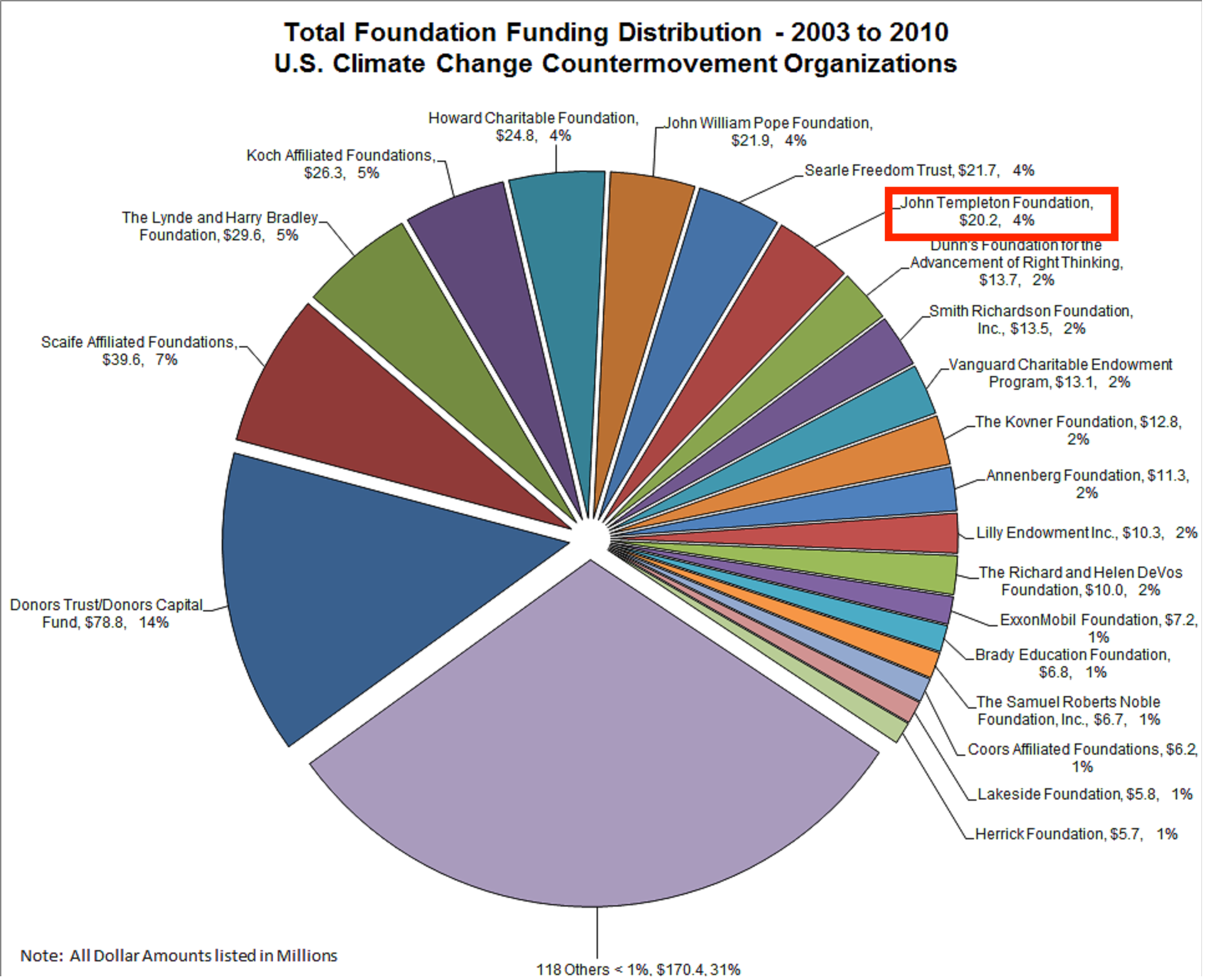 Here is the money received by various CCCM organizations; if you study global warming, you’ll be familiar with many of them, with the largest being well known conservative think tanks. In other words, the pie chart above shows the amount of money given by foundations to organizations shown below, who use the dosh to create climate-change-denialist propaganda. 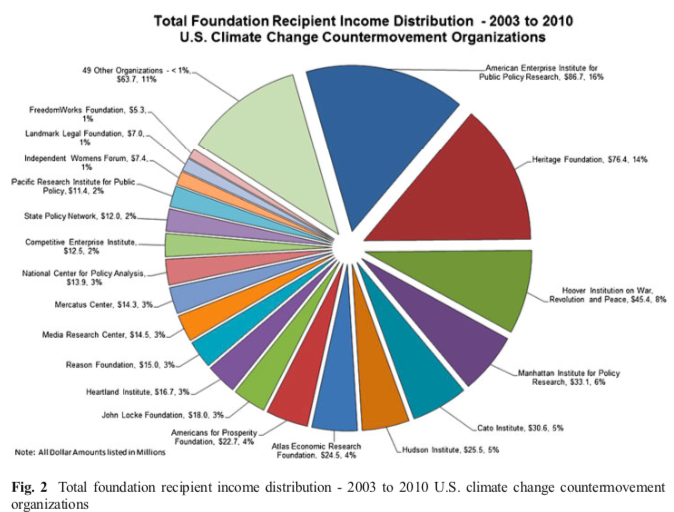 Given Templeton’s predilection for selling itself as a science-friendly organization, and the number of genuine scientists who swill at the Templeton trough, I’d hope that the Foundation would have stopped this behavior, though of course they continue funding ludicrous religion-and-science-are-bffs initiatives. I can’t find any information later than this study, but that means nothing. If Templeton lets me know that not a penny of their resources goes to organizations involved in climate-change denialism, I’ll be glad to issue an update. But for the nonce, no scientist with any self-respect should be taking money from Templeton.