I’m getting ready to travel for a week, and there’s lots of preparation, including educating duck-sitters on how to properly feed the mallards. (Anna is here, of course, but I’m spreading the work around.) While I prepare to leave, allow me to bore you once again with photos and videos of my children and grandchildren taken over the last few days.

First, the good mom, Katie Peck, cocking her head at me. As you’ll see below, she has a lovely blue speculum. She also seems to have a skinny neck and a dent in the back of her head. 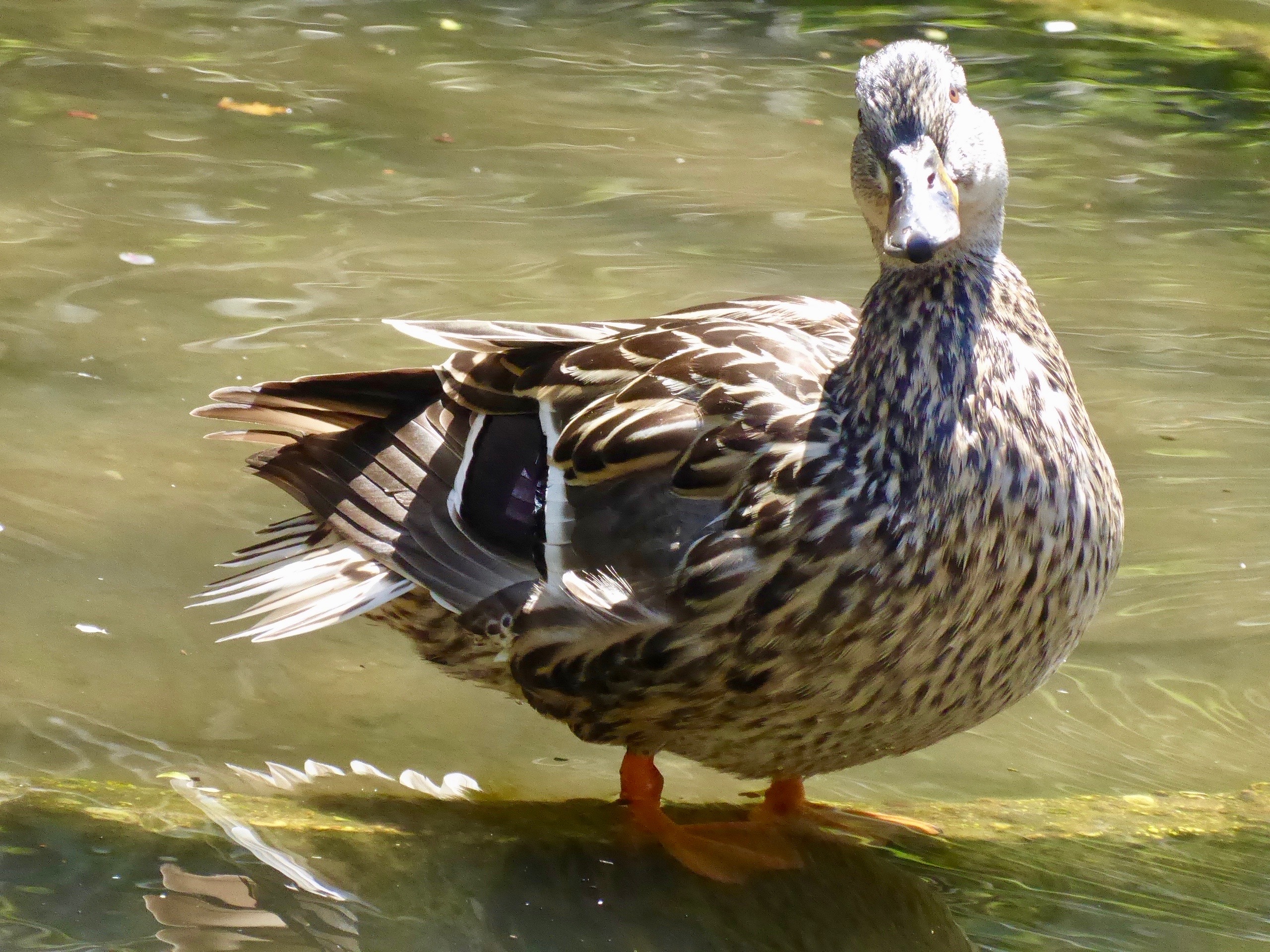 And the wickedly handsome Gregory Peck, distinguishable by his greenish bill, the violet cast of his head (more so than other drakes), and his continual low quacking as he swims around, especially at feeding time. Look at that beaut: the Robert Redford of drakes! 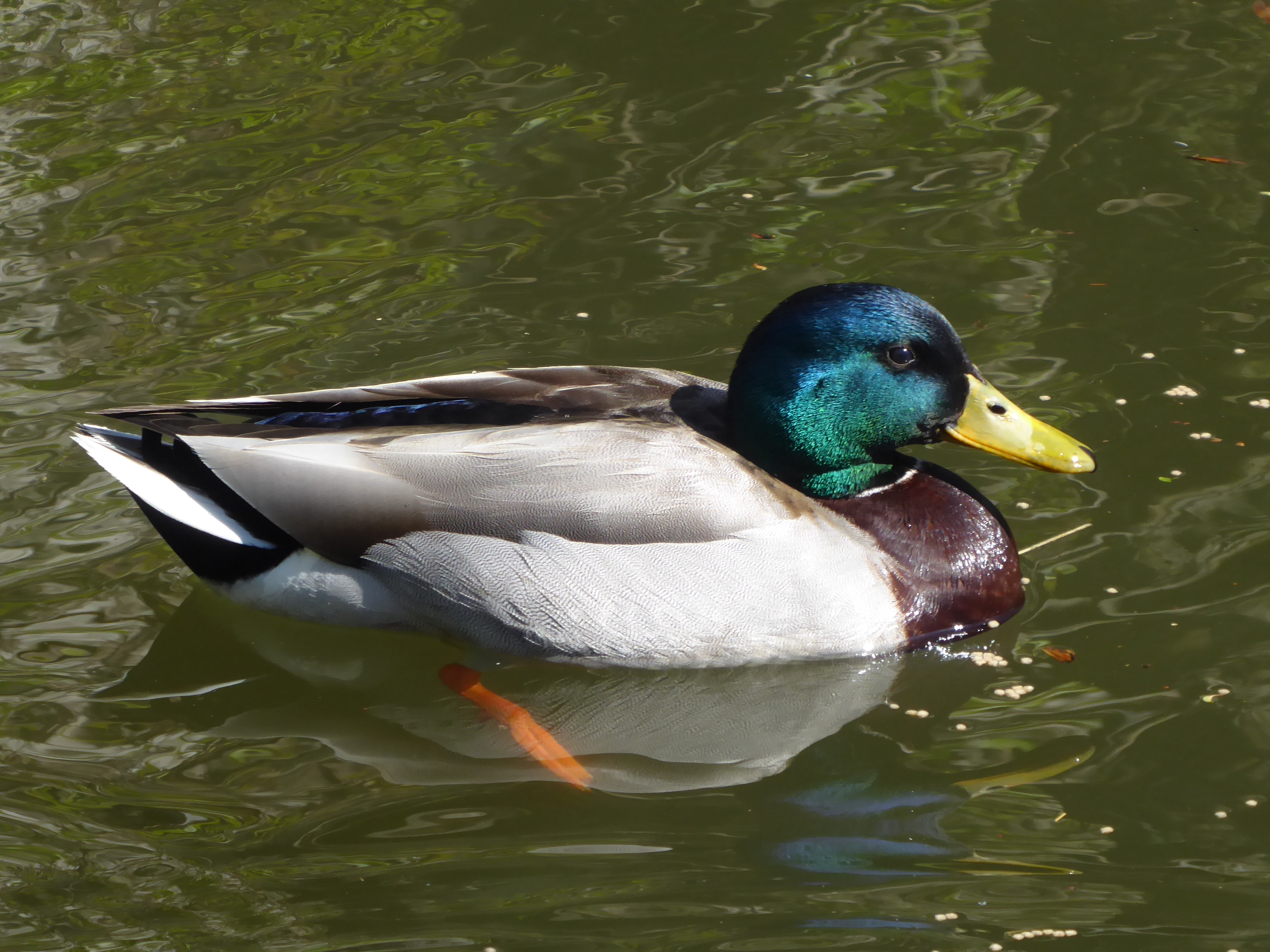 The nictitating membrane (‘third eyelid’) covering his eye. Mallards sleep with half of their brain at once, with one eye closed and the other open to look for trouble. They alternate between halves so that the whole brain eventually gets a rest. 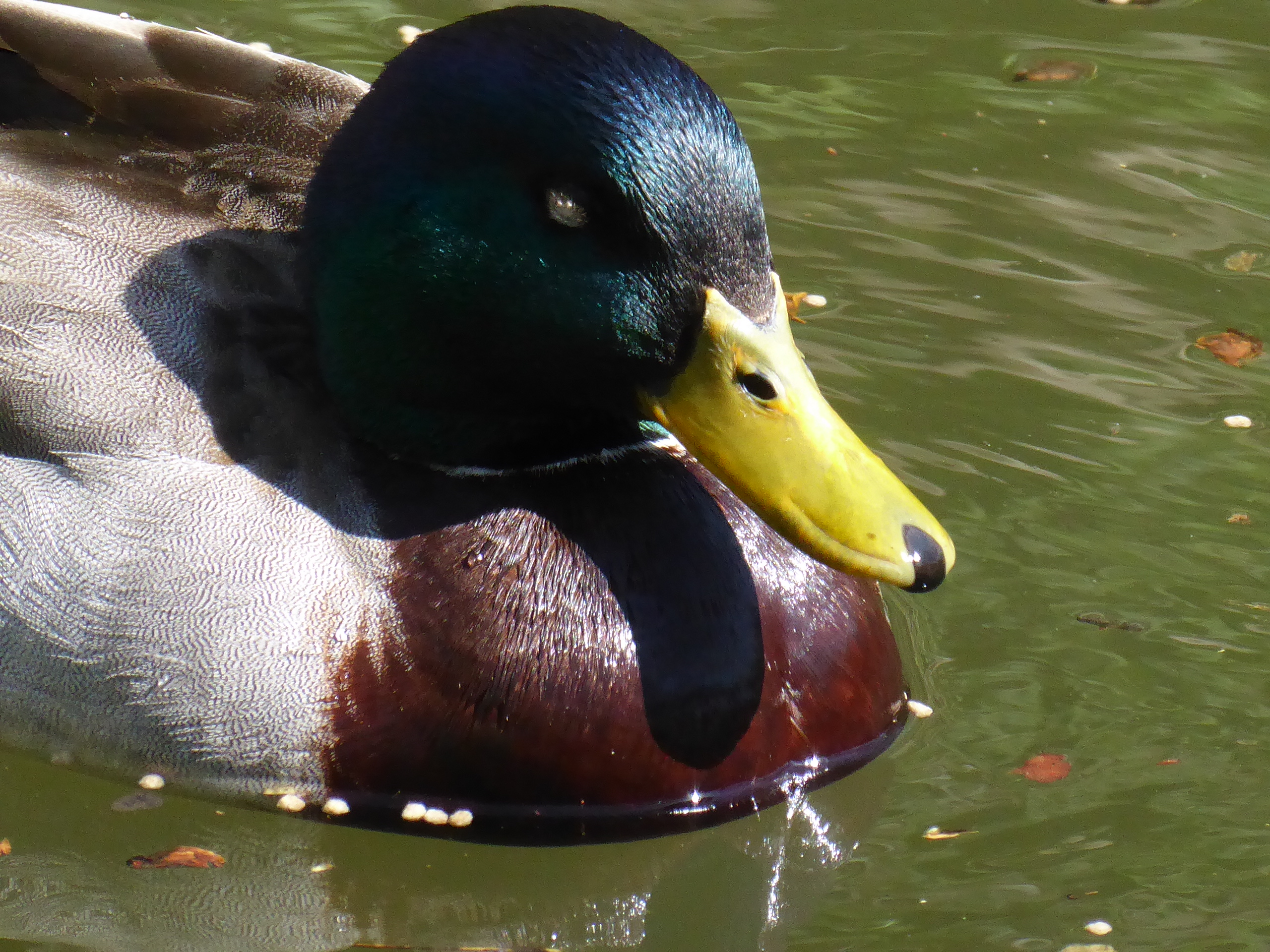 Katie likes to bathe with some of the babies after a meal, but they also hang out on the cement rings, which are convenient for sleeping. Note her thin neck and dented head: 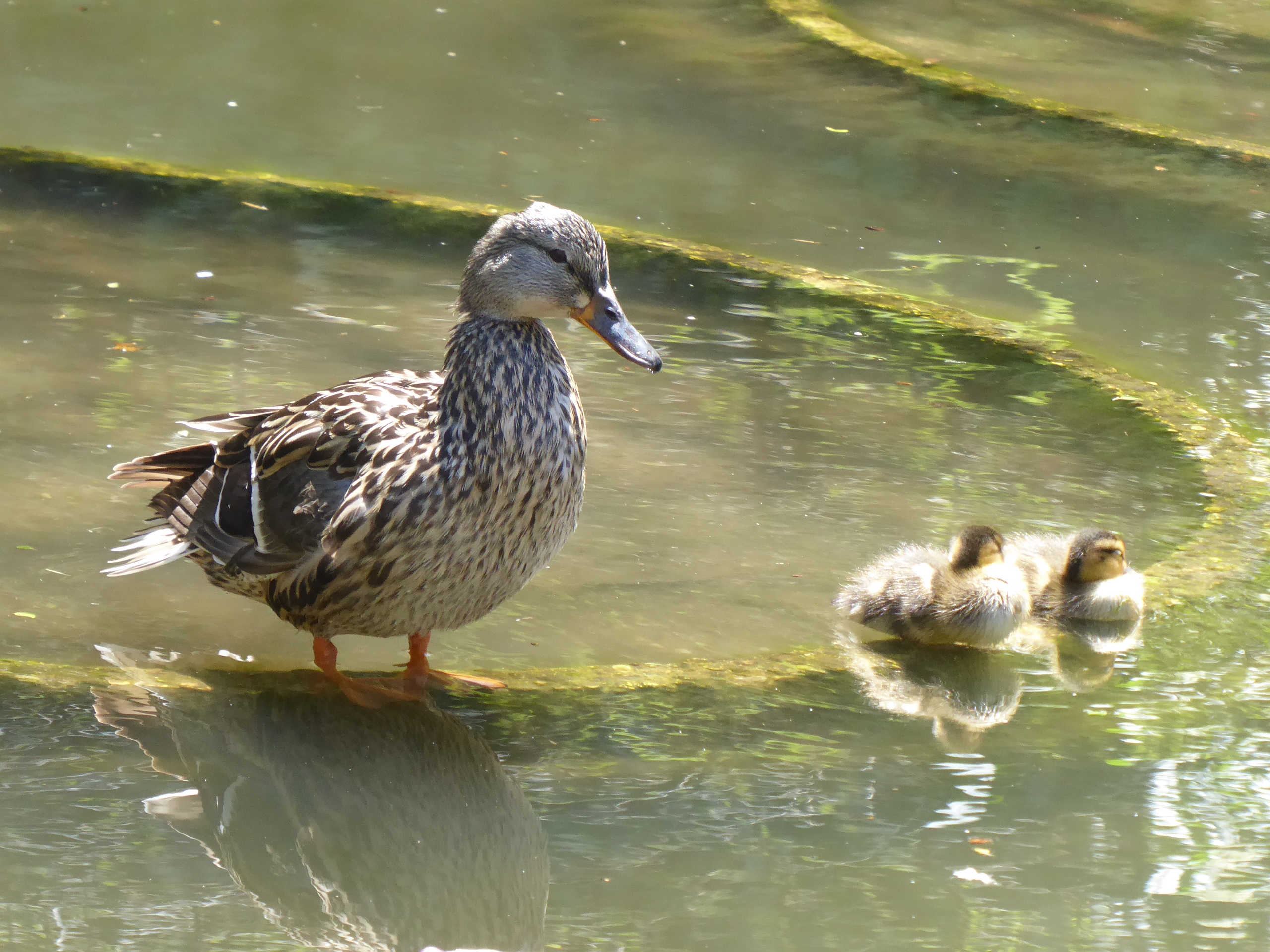 I’m sure that the babies learn by watching mom. When she preens, they preen, and when she dives under the water after a meal, doing it repeatedly like a porpoise, they see it and do it as well. (See first video below.) 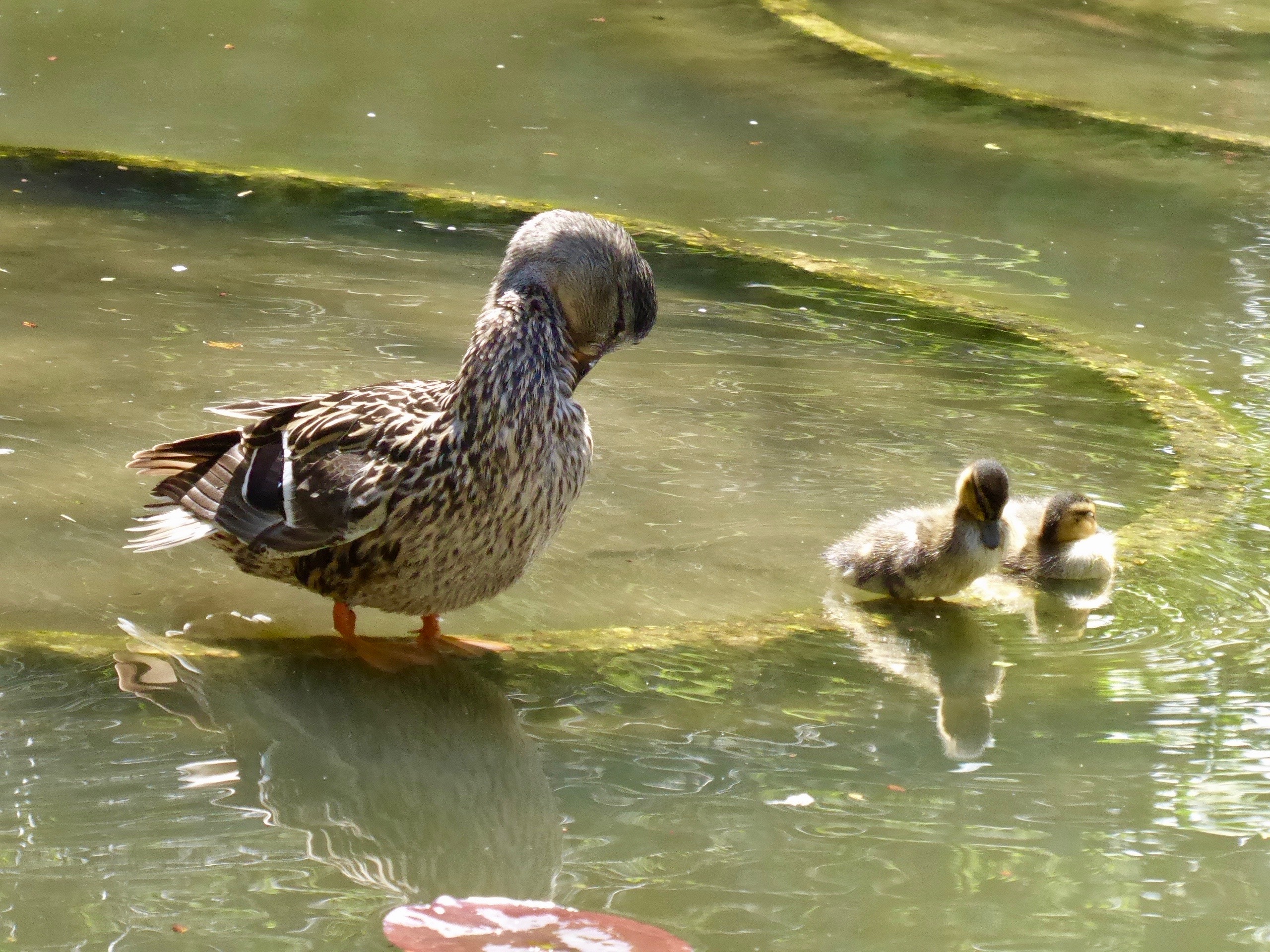 Here’s some imitative postprandial washing and porpoising on and around the island. Ducks have an oil gland at the base of their tail that they nibble with their bills and then spread the oil over their feathers.

Note the babies porpoising like Katie. (Anna and I are conversing during the video.)  Note too that there are lots of turtles around, but they and the ducks get along fine.

A slightly wet duckling. Note that the spiky feathers of adolescence are starting to appear: 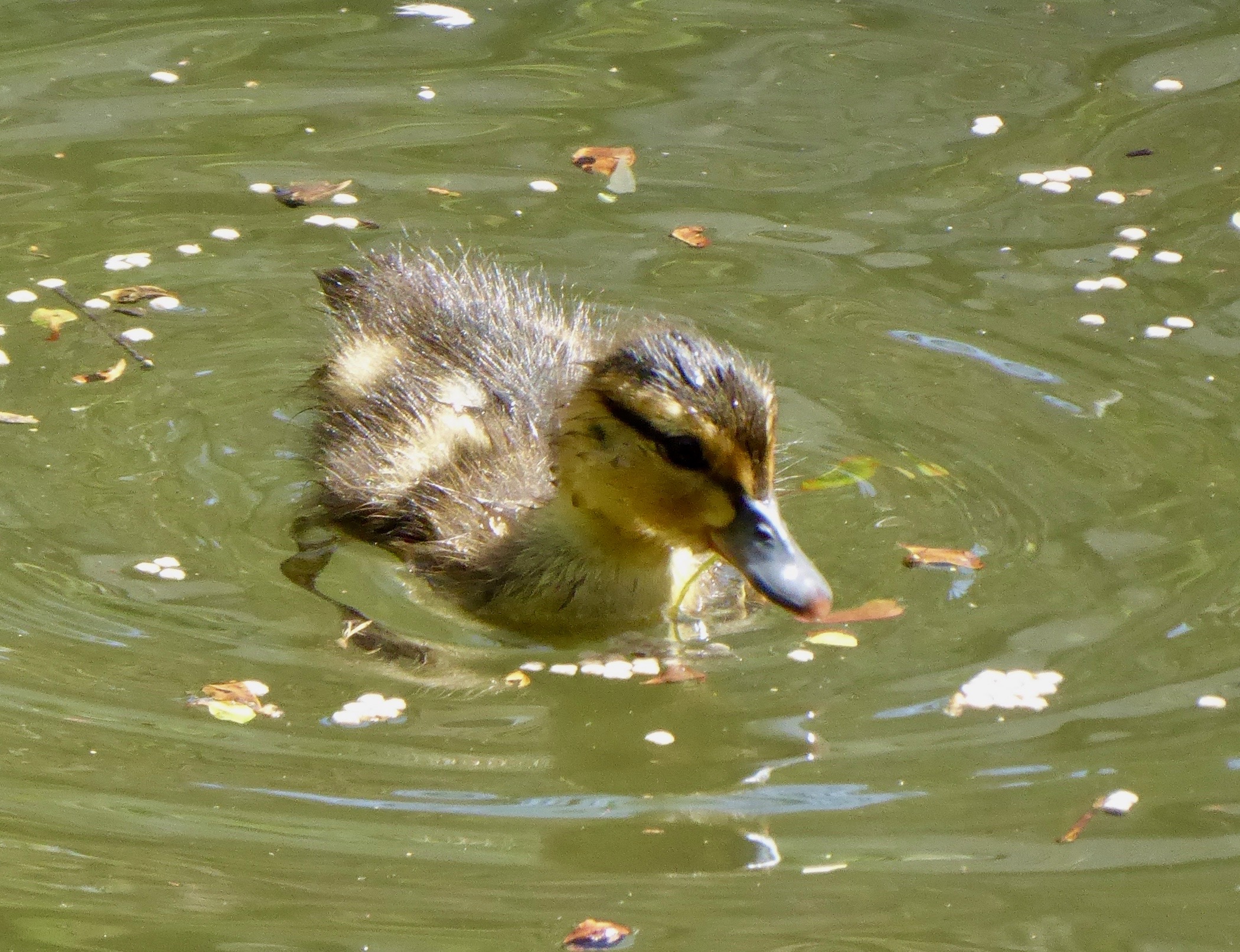 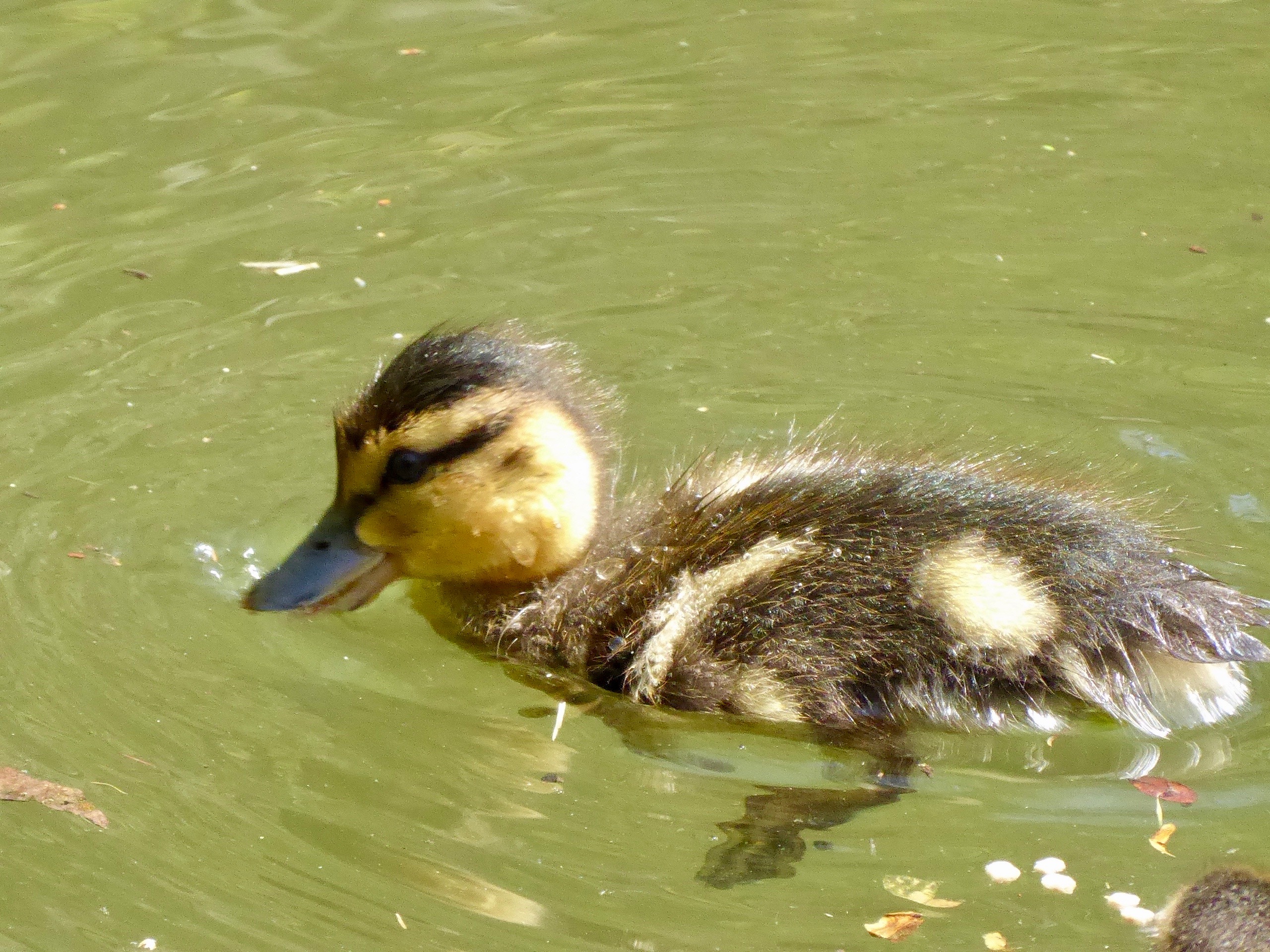 They get fluffier when they dry out a bit. One of these guys is sleeping: 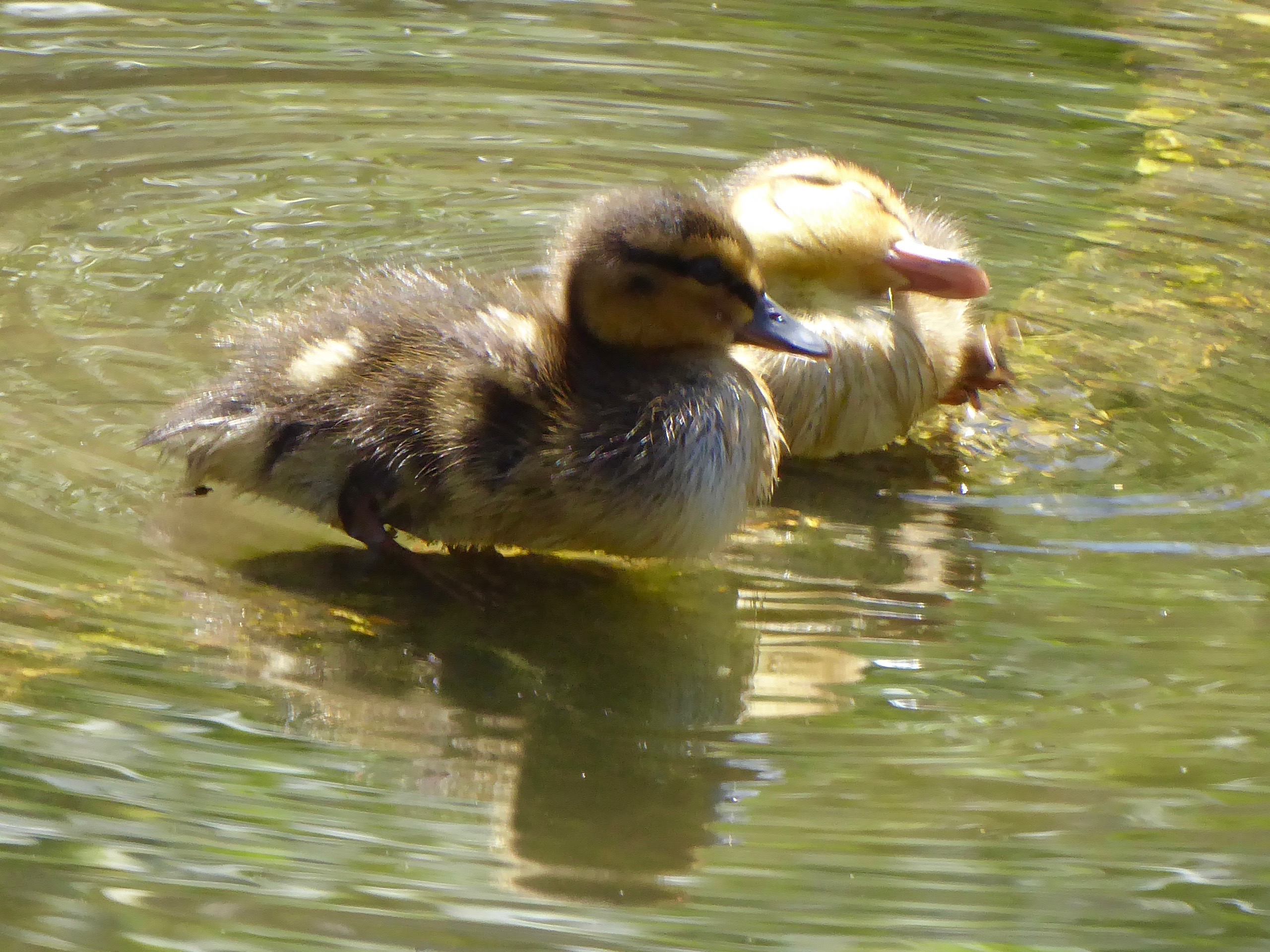 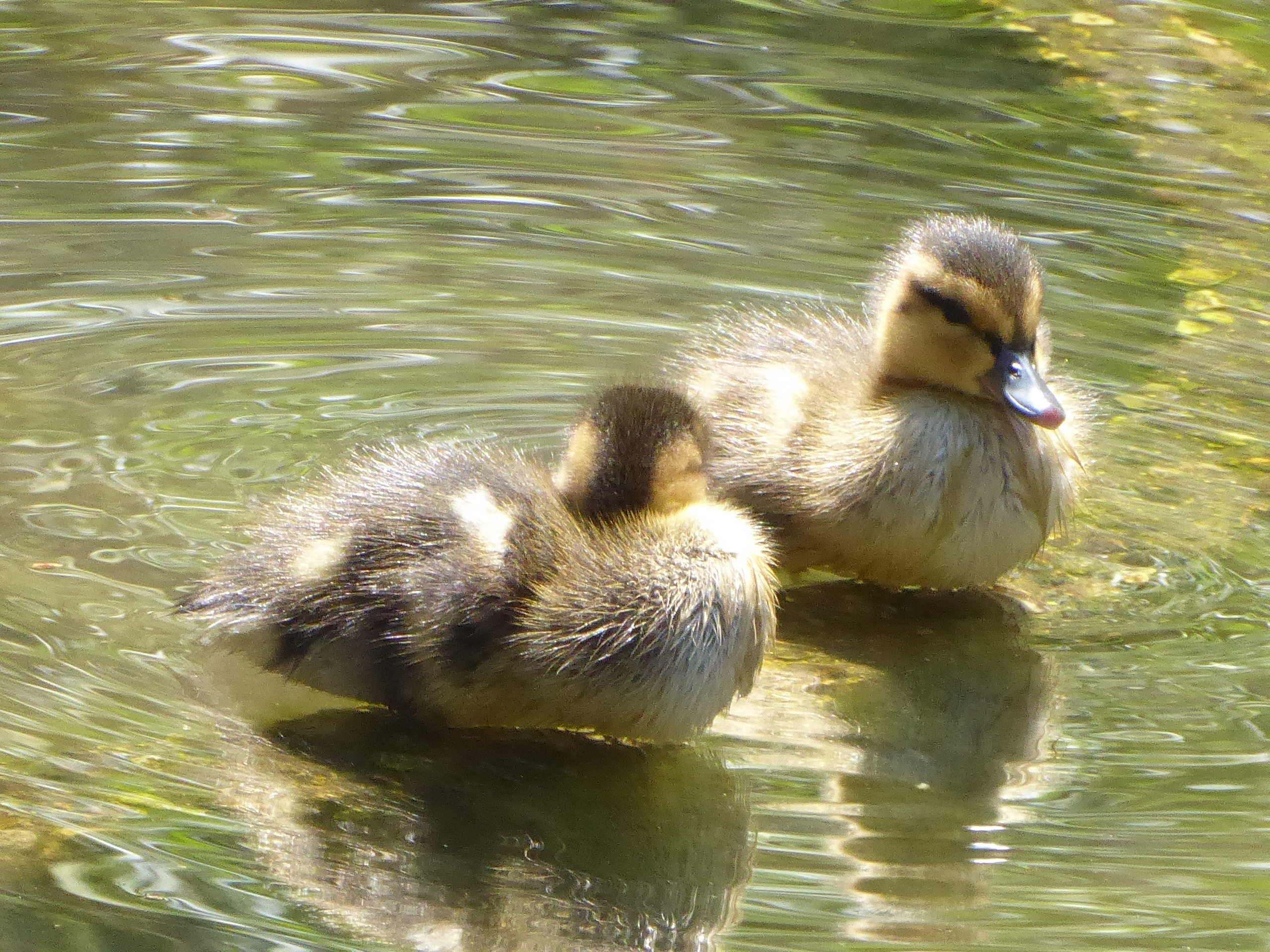 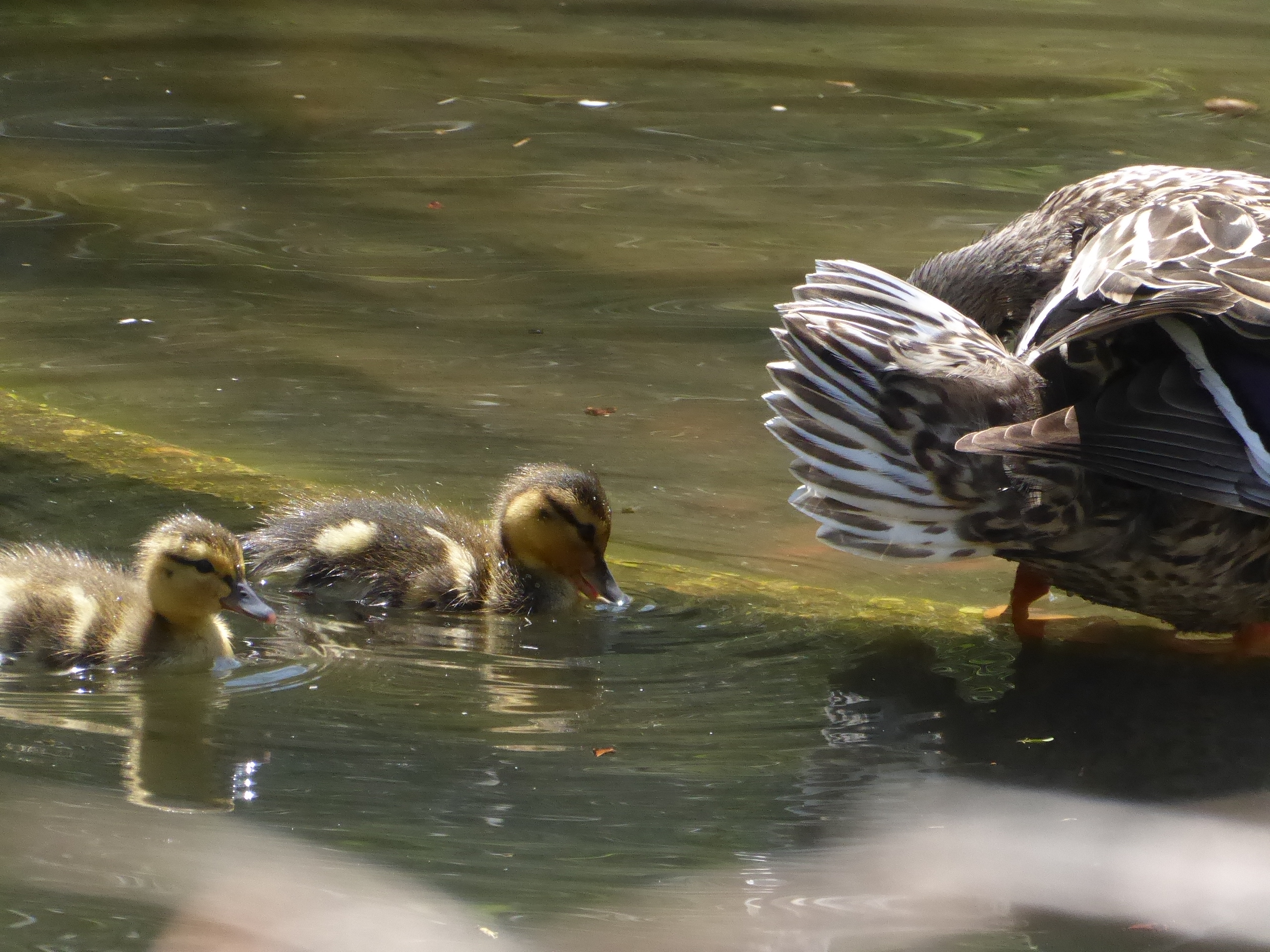 Everybody out of the water! 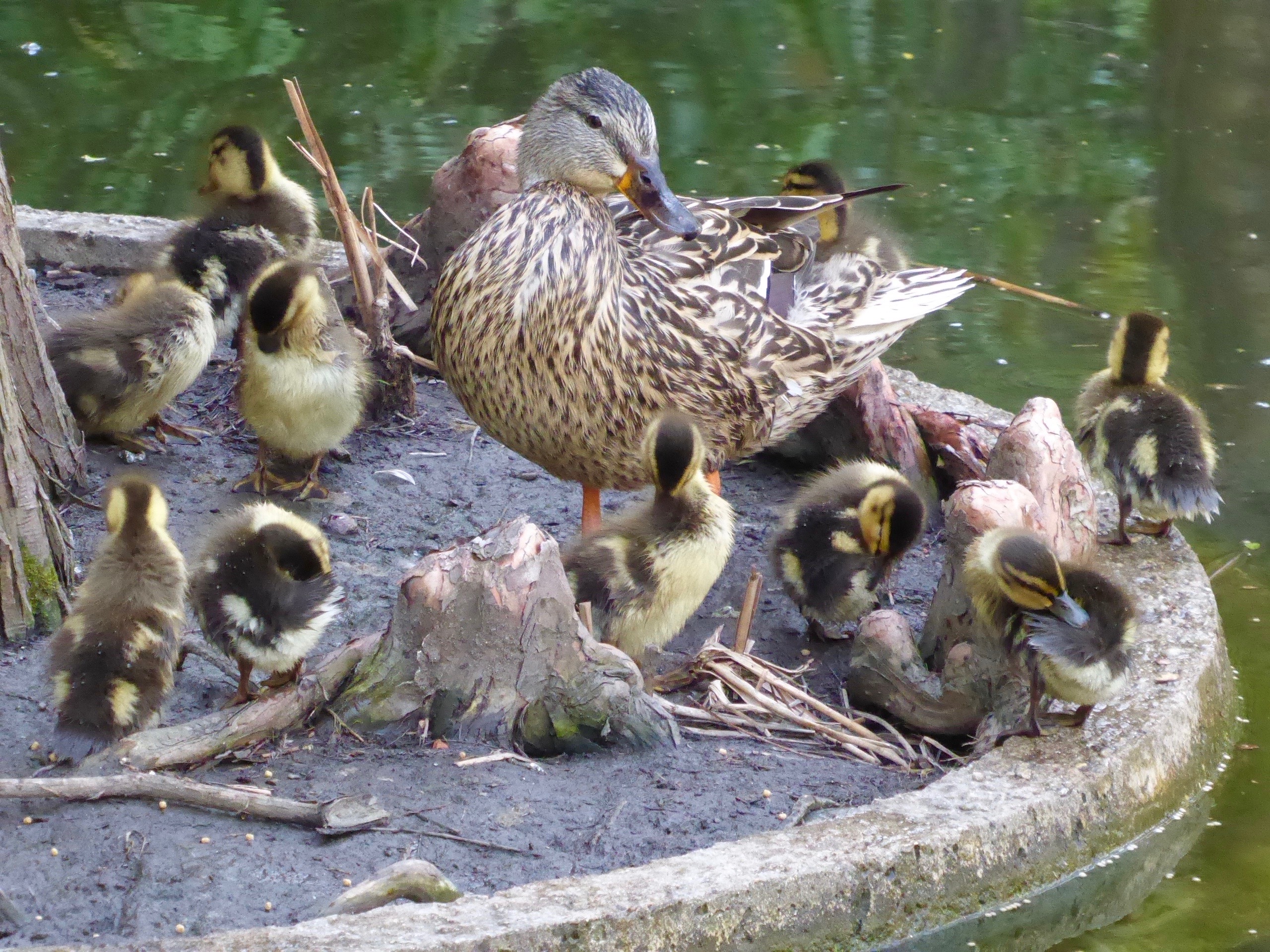 This is one of my favorite pictures—an action shot with everybody following Mom in preening: 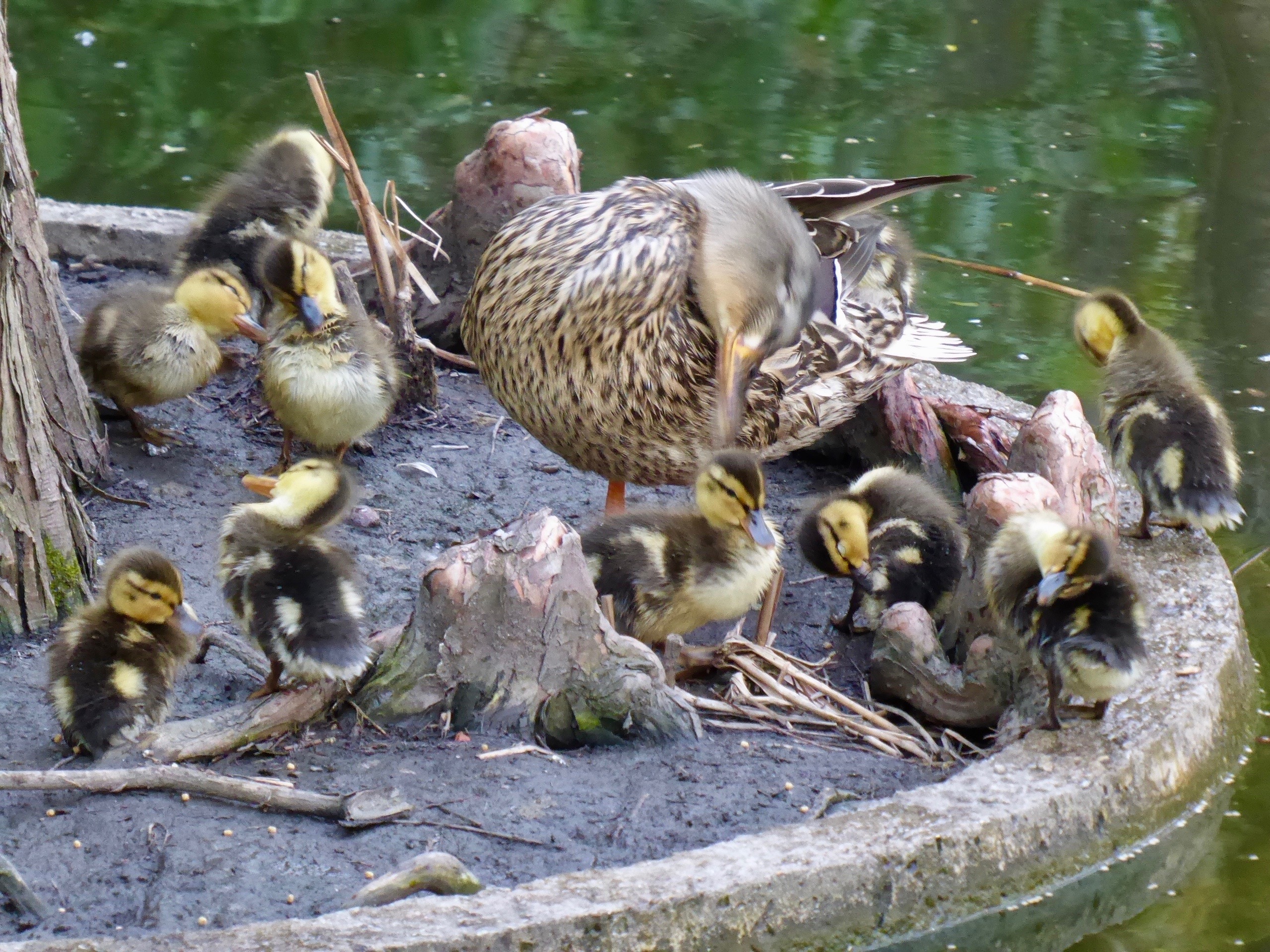 Katie likes to stand on one leg from time to time (she alternates legs, so I’ve learned that she’s not injured). Ducks do this to conserve heat. 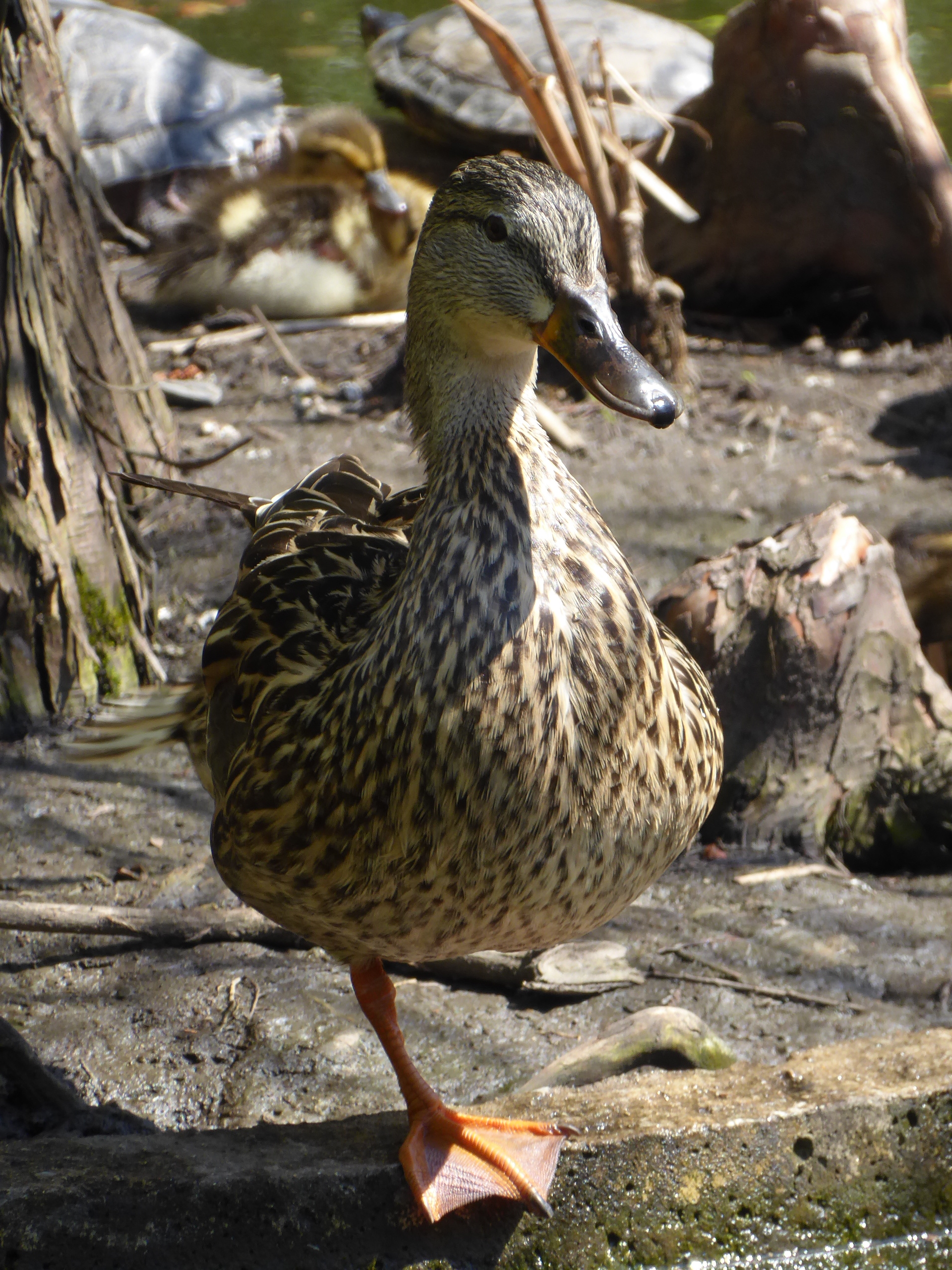 The gang on Duck Island #2: 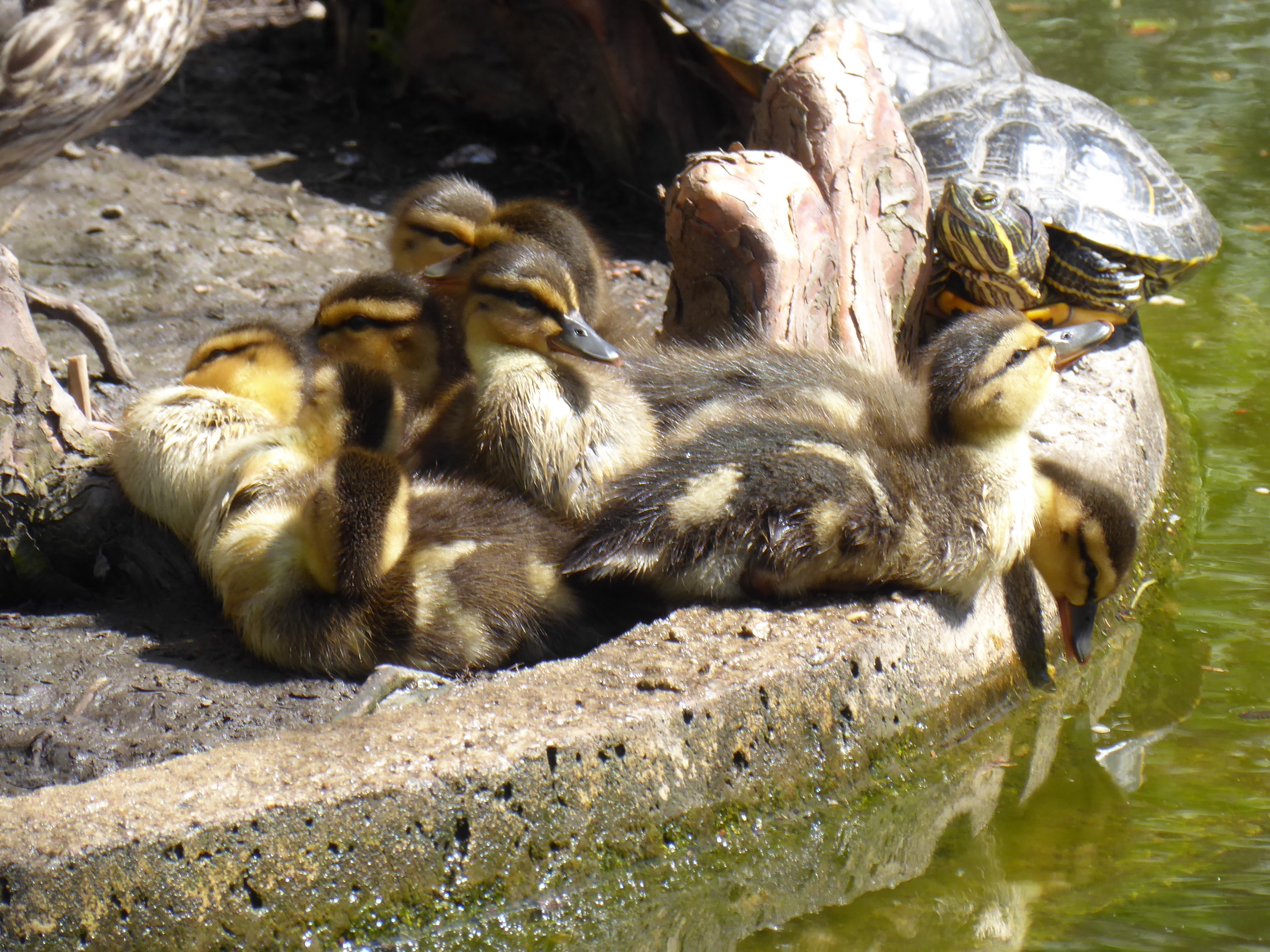 Everyone on the beach! 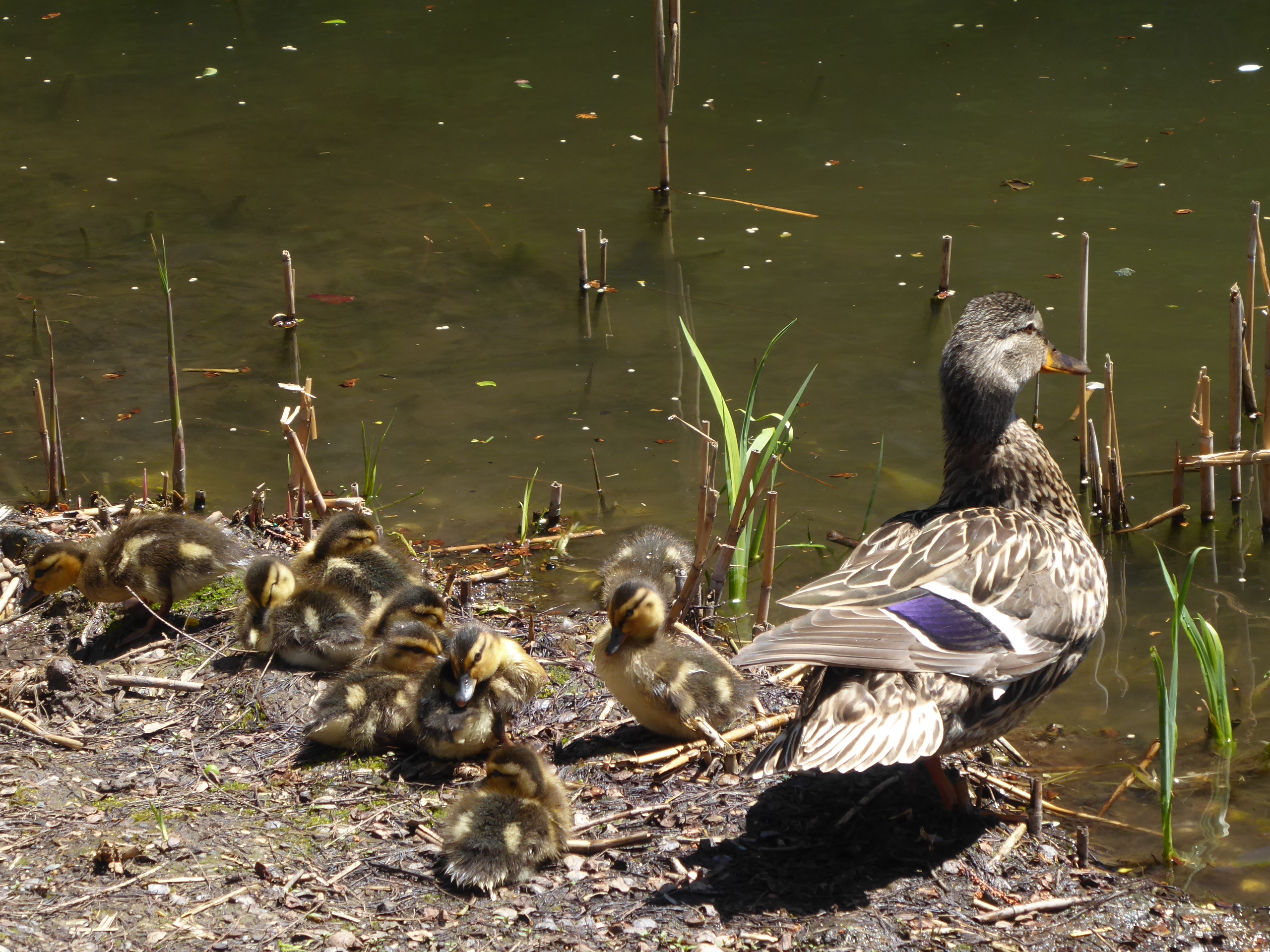