I didn’t know about this until I was told by Kelly Houle, who recently published a lovely art book containing English translations (from Polish) of Abramek Koplowicz’s poems, written in the Lodz Ghetto before he was gassed by the Nazis. Abramek Koplowicz was born on February 18, 1930, and had he lived he’d be 89 today. But he died at age 14, one of many Jewish children murdered by the Germans.

I’ve written about Abramek and his poetry, the English translations made by my friends Malgorzata Koraszewska and Sarah Lawson, and about Kelly’s book, here and here. The art book is beautiful, and you can see it and purchase it here.  (If you’d like to buy copies to donate to the Library of Congress, or places like D.C.’s Holocaust Museum, that would be great. I’m purchasing one for the University of Chicago’s rare book collection.) There’s also a recording of Kelly reading Abramek’s poetry, including the title poem “A Dream”, here.

Abramek’s stepbrother Lolek, who survived the camps and a death march, is still alive and living in Israel at 94. Lolek is the one who found Abramek’s poems in a school notebook among his father’s possessions (Abramek’s father also survived the camps). Lolek brought the poems to the attention of Israeli journalist Sarah Honig, who published the story in the Jerusalem Post, giving a longer version on her blog.  Here’s a bit of the story from that site:

[Abramek’s] father, Mendel Koplowicz, labored at a workshop producing cardboard boxes for the Germans. An ordained rabbi, he became a confirmed atheist after reading many secular philosophy books. Abramek worked at a shoe-making workshop, occasionally showing up at his father’s workshop to entertain the laborers by reciting poetry and satirical skits in verse. The handsome boy delighted his listeners, who unanimously agreed that he was a genius. One of those who heard him was Haya Grynfeld, Lolek’s mother and Mendel Koplowicz’s co-worker.

When the Koplowicz family was taken to Auschwitz, the mother, Yochet Gittel, was immediately sent to the gas chamber. The father and 14-year-old Abramek were sent to forced labor. But as he left for work, Mendel Koplowicz left his son in the barrack in order to protect him from the ordeal. Upon his return, he found it empty. The Germans had come and sent all those inside to death.

Lolek Grynfeld and his family lasted in Lodz even longer. The Germans rounded them up only in October 1944, by which time they no longer deported their victims to Auschwitz. Thus, Lolek – who was a bit older than Abramek –ended up in the Sachsenhausen concentration camp, and his mother in Ravensbruck. His father was killed early on in the German bombardments; Lolek did his work quota at a ghetto hospital until it was liquidated in 1942.

At war’s end, having miraculously escaped death at Sachsenhausen, he was taken on one of the infamous German death marches: “On the fifth night of the ordeal,” Grynfeld recalls, “they locked us up in an old stable. Several of us conspired to escape. I tripped one of the guards and the others finished him off with their wooden clogs.” Thus, after several hair-raising encounters with the Germans, Grynfeld and his mother managed to survive and both returned to Poland.

And then Lolek met another survivor, married her, and they had children, grandchildren and great-grandchildren.

Abramek’s memory is kept alive by Lolek (who has had a memorial to Abramek built in Israel and a street named after him in the Polish town where he was born), and also by this book.

Here’s the only existing photo of Abramek (from Honig’s blog); he’s in the center flanked by his parents. His mother was also gassed. 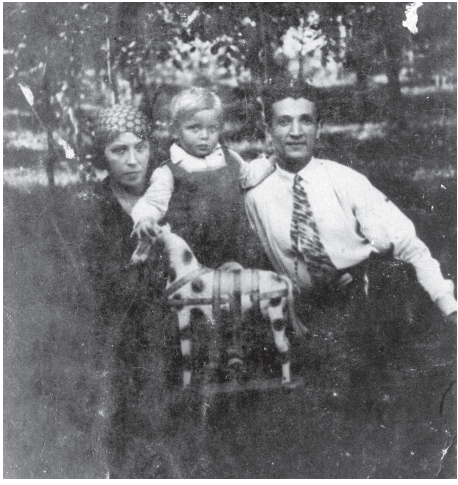 Abramek’s notebook with his poetry (note that it bears the date of 1943 and the fact that it was written in the ghetto): 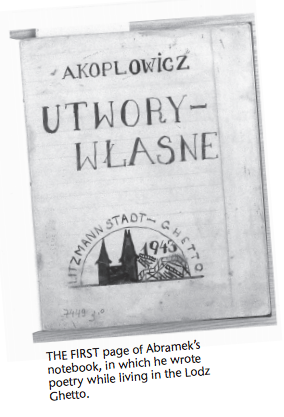 A painting of a praying Jew made by Abramek (he was talented!): 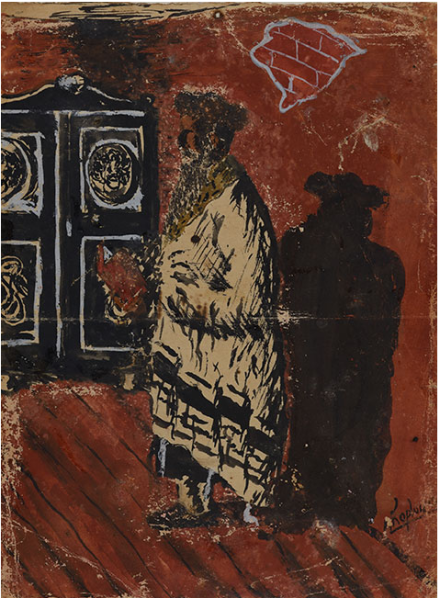 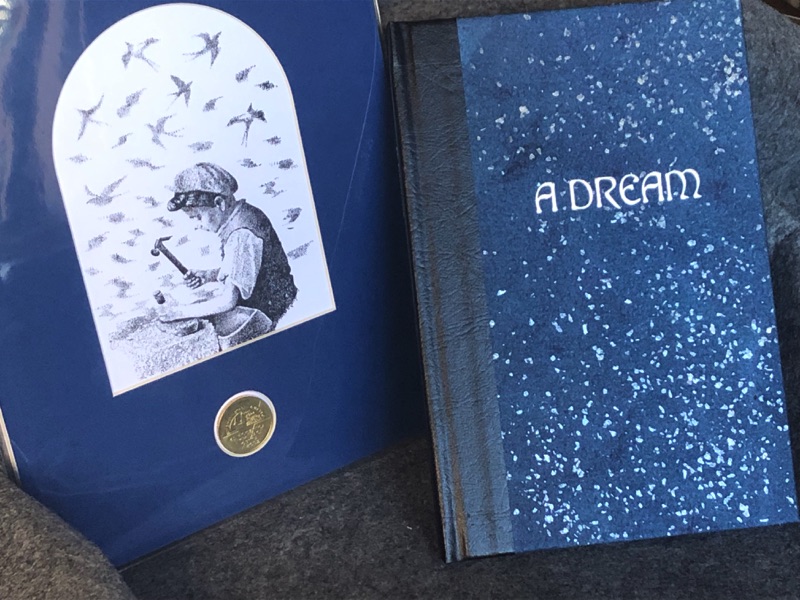 Finally, here’s a small excerpt from Sarah Lawson’s introduction to the poems in Kelly’s book:

Between one and two million Jewish children were killed in the Holocaust. Most of their names are lost except in the memory of family members and the records at Yad Vashem. They had no time to distinguish themselves on a larger stage. A pitifully few names have come down to us. Anne Frank is the best known example, and there were a few other young diarists and letter writers. Out of a million and a half European children, how many might have had important careers in medicine, science, and the arts? How many would have become parents and grandparents of scholars and diplomats, of writers and musicians? This destroyed potential is unknowable but undoubted. Imagine them all lined up and holding hands. The line would stretch for more than 450 miles.