I’ve published a fair number of pieces (see here) criticizing the leadership of the Women’s March (WM), including Tamika Mallory, Linda Sarsour, and Carmen Perez—three of the four co-chairs—for cozying up to Louis Farrakhan, a bigot, a misogynist, a racist, and a homophobe. There have even been accusations, whose truth isn’t yet known, that the WM used Farrakhan’s security, the “Fruit of Islam” as their own security, which would be an unacceptable financial tie that would in part explain the attraction of Mallory et al. to the loony Farrakhan and his obscene views.

But lately there have been an increasing number of dissenters among women, some of whom were big guns in the original Women’s Marches. First, actors Alyssa Milano and then Debra Messing separated themselves from the WM, asking the leaders to decry Farrakhan and stop being anti-Semitic (the article below reports that the leaders are indeed anti-Semites). Then the think tank of Germany’s Social Democratic Party—one of that nation’s two major political parties—rescinded its Humanitarian Award to the Women’s March because of Sarsour’s anti-Semitism.

Now various city-based WM’s that aren’t really under the aegis of the “Women’s March, Inc.” are breaking away, and even suing the main organization for claiming exclusive use of the brand “Women’s March” and preventing others from using it. Teresa Shook, one of the WM’s creators, and Mercy Morganfield, a black woman who was past president of the Washington D.C. Women’s March (she’s also the daughter of Muddy Waters!), have both denounced the four co-presidents of WM Inc. for financial improprieties, anti-Semitism, and bullying.

The Tablet article is very long, and to my mind throws a bit too much mud at the WM in an attempt to show its flaws/ (They cite Anthony Bourdain, for crying out loud!) But the piece does raise a number of disturbing issues about the WM, and it’s very thoroughly researched. If you have any interest in the WM, have a read (click on screenshot):

A story in The American Conservative characterized the Tablet piece as a “blockbuster about how left-wing Jew-hating crazies infiltrated the leadership cadre of the Women’s March from the beginning.”  That’s a pretty strong accusation, but, if the Tablet report is correct, it’s close to the truth.  Here are some specific issues in the article (indented text are quotes from Tablet):

1.) The antisemitism that persisted among the leaders of the WM. The first quote refers to a 2016 meeting of seven organizers of the WM in New York:

According to several sources, it was there—in the first hours of the first meeting for what would become the Women’s March—that something happened that was so shameful to many of those who witnessed it, they chose to bury it like a family secret. Almost two years would pass before anyone present would speak about it.

It was there that, as the women were opening up about their backgrounds and personal investments in creating a resistance movement to Trump, Perez and Mallory allegedly first asserted that Jewish people bore a special collective responsibility as exploiters of black and brown people—and even, according to a close secondhand source, claimed that Jews were proven to have been leaders of the American slave trade. These are canards popularized by The Secret Relationship Between Blacks and Jews, a book published by Louis Farrakhan’s Nation of Islam—“the bible of the new anti-Semitism,” according to Henry Louis Gates Jr., who noted in 1992: “Among significant sectors of the black community, this brief has become a credo of a new philosophy of black self-affirmation.”

. . . None of the other women in attendance would speak openly to Tablet about the meeting, but multiple sources with knowledge of what happened confirmed the story.

More anti-Semitism surfaced after the first, and wildly successful, march:

At the end of January, according to multiple sources, there was an official debriefing at Mallory’s apartment. In attendance were Mallory, Evvie Harmon, Breanne Butler, Vanessa Wruble, Cassady Fendlay, Carmen Perez and Linda Sarsour. They should have been basking in the afterglow of their massive success, but—according to Harmon—the air was thick with conflict. “We sat in that room for hours,” Harmon told Tablet recently. “Tamika told us that the problem was that there were five white women in the room and only three women of color, and that she didn’t trust white women. Especially white women from the South. At that point, I kind of tuned out because I was so used to hearing this type of talk from Tamika. But then I noticed the energy in the room changed. I suddenly realized that Tamika and Carmen were facing Vanessa, who was sitting on a couch, and berating her—but it wasn’t about her being white. It was about her being Jewish. ‘Your people this, your people that.’ I was raised in the South and the language that was used is language that I’m very used to hearing in rural South Carolina. Just instead of against black people, against Jewish people. They even said to her ‘your people hold all the wealth.’ You could hear a pin drop. It was awful.”

There’s more, but read for yourself.

2.) Financial opaqueness of the WM, and failure to release legally open documents to other WM chapters or the press. This is complicated, and I won’t give quotes. It revolves around the lack of clarity of how much the WM organizers are getting paid, its legal status as either a 501(c)(3) or 501(c)(4) organization, and the lack of clarity about its entanglement with a sponsoring but much less money-accruing organization, the “Gathering for Justice.”

3.) The use of Farrakhan-sponsored security for the WM. This is unclear but seems likely. Already in 2015 Linda Sarsour emitted this tweet showing the Fruit of Islam (FOI), the “muscle” of the Nation of Islam, Farrakhan’s church: 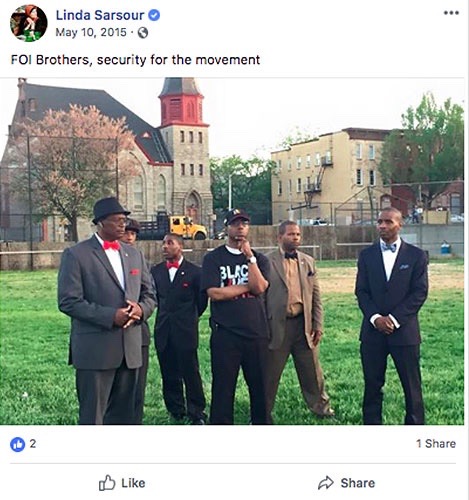 But there are accusations that the FoI is being used now, and about that we have hearsay but no absolute confirmation. If this is the case, it’s a serious conflict of interest for the Women’s March, as they’re using the muscle of an organization that opposes everything the WM is supposed to stand for. Here’s what Tablet says:

It was around this time [March 29, 2018] that Morganfield says she first heard that Nation of Islam members were acting as security detail and drivers for the co-chairs. “Bob [Bland] called me secretly and said, ‘Mercy, they have been in bed with the Nation of Islam since day one: They do all of our security,’” Morganfield told Tablet.

Two other sources, with direct knowledge of the time, also claimed that security and the drivers for the co-chairs were members of the Nation of Islam.

Responding to a query last month from Tablet contributor John-Paul Pagano, the group sent an emailed reply that read, in part: “Women’s March has no financial ties or relationship with the Nation of Islam. … Our senior leadership has been subject to extreme threats of violence. For their safety, we engaged licensed security firms as needed for credible threats. For legal and moral reasons, we do not ask for the religious affiliations of vendors, consultants, or employees at any level.”

Statements by Sarsour tell a different story. In a Facebook post from Sept. 30, 2017, Sarsour writes about an incident in which she was harassed in New York’s Penn Station. “What breaks my heart to pieces is that I don’t even feel safe in my own city,” she laments before offering a word of gratitude to her security detail: “thank you to the brothers who keep me safe so I can continue to do what I do.”

“She needs to be surrounded by FOI!” a Facebook user wrote in the comments under the post.

“I usually am brother,” Sarsour replied.

It’s not just financial entanglement at stake here. It’s about a movement that stands for women’s equality and the rights of minorities using muscle from a racist, homophobic, and misogynistic organization—in other words, arrant hypocrisy. It should be easy to find this out, but nobody has, at least not to my satisfaction.

4.) The seizure of power by the co-Presidents not for social justice, but for their own esteem and personal ambition. Plus the deflecting of criticism of the WM by dismissing female detractors as “white women”.

When Morganfield tries to sum up how and why it all went wrong, she sees the downfall of the Women’s March in a hunger for fleeting recognition and publicity that eclipsed the movement’s real political power. “The reason I joined the Women’s March is because I believe women could truly be the most powerful voting bloc this country has ever seen,” Morganfield said. “The problem with the Women’s March is that in order to stay in the news, they had to be like ambulance chasers: They chased every issue that could get them media coverage. That’s not strategy; that’s tactics.” Nor is she holding out hope that critical media attention will prove any more beneficial to the co-chairs than the adulation they received early on. “The response that gives them the most sympathy is ‘This is white women trying to come out against women of color,’” said Morganfield. “The context is always, ‘the white media are trying to bring down women of color.’ And in this case, they’ll probably say it’s white Jewish women, which of course discounts the fact that there are black Jews. There’s somewhere close to 300,000 black Jews! What about them? It’s just divisiveness.’”

For her part, Wruble agrees—and has pivoted her energy to a new organization devoted to women’s activism, called March On. “At March On, we approach things from a bottom-up rather than a top-down way. We take the lead from local organizers, and we understand that there’s no one-size-fits-all when it comes to organizing. Our organizers come from all walks of life and backgrounds. We’re diverse and intersectional in ways that people often don’t think about. Many women in red states, for example, couldn’t follow an organizing playbook crafted out of D.C. or New York City. The red states couldn’t participate, for example, in a general ‘women’s strike’—people would lose their jobs.”

. . . Morganfield doesn’t want to see disillusionment turn into cynicism. She’s hoping that those who felt inspired will continue to do so—and find ways to effect real and lasting female-driven change in American society. “This needs to be a blip in our radar,” she said. “We don’t have to call it the Women’s March. I think we still have an opportunity to pull this together. But it can’t be the Jewish women’s movement or Black womens’ or White womens’ or the Spanish women’s movement. We just need women voting together.”

If you haven’t yet recognized the overweening ambition and self-aggrandizement of Linda Sarsour, then you’ve been blind. The Tablet article makes it clear that Mallory, Perez, and even Bland have been infected by the same love of power and attention. That, plus their cozying up to the Nation of Islam and their palpable anti-Semitism, should do the Women’s March in, or at least mandate new leadership. The question is whether American feminists are “woke” enough to allow good judgement to override an unwarranted admiration for the anti-Semitic women of color chosen to be the faces of the Women’s March.

UPDATE: Reader Kelly, in the comments below, mentions this video from a center-leftist that talks about the Table article. If you don’t want to read it, the post above and this video will get you up to speed, though not full speed: